It seems I have another tall ficus salicaria that needs some work.
It’s another tree I got from Juan but I’m not sure if I can keep it tall.
I’ll try but I’m not promising anything.

The roots are bad on this one.
Baaaaad. 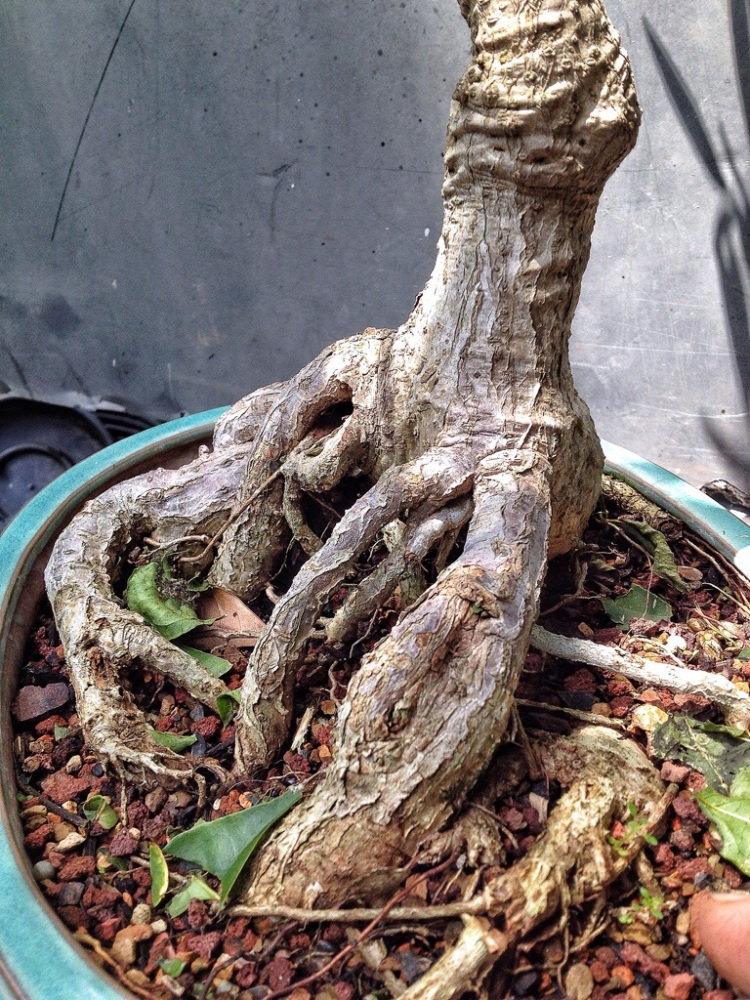 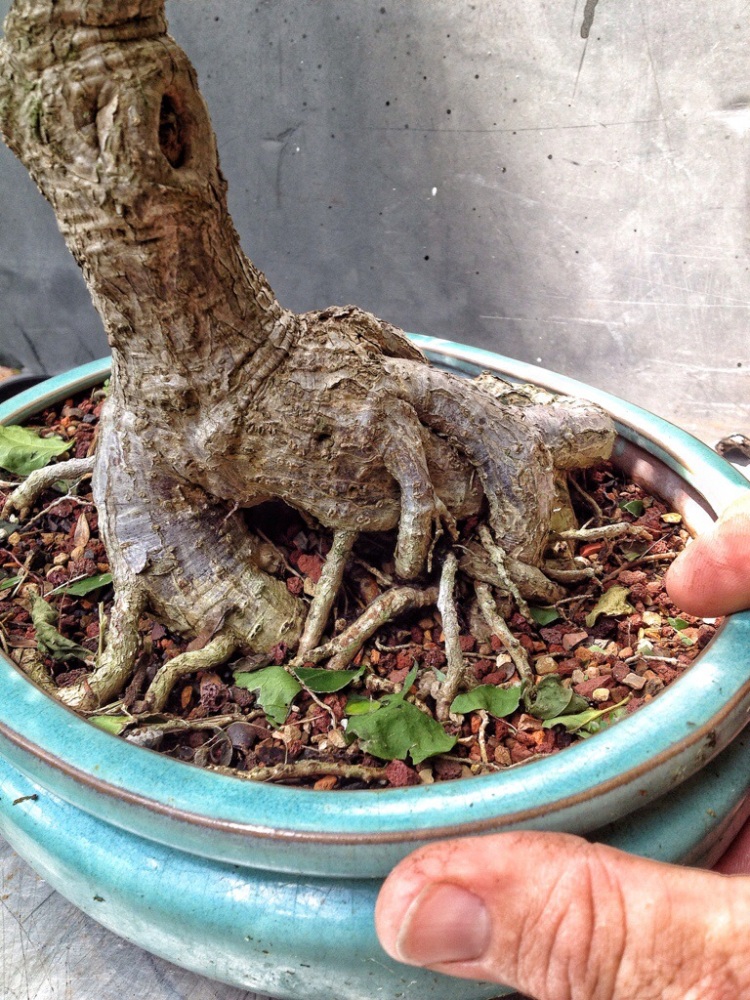 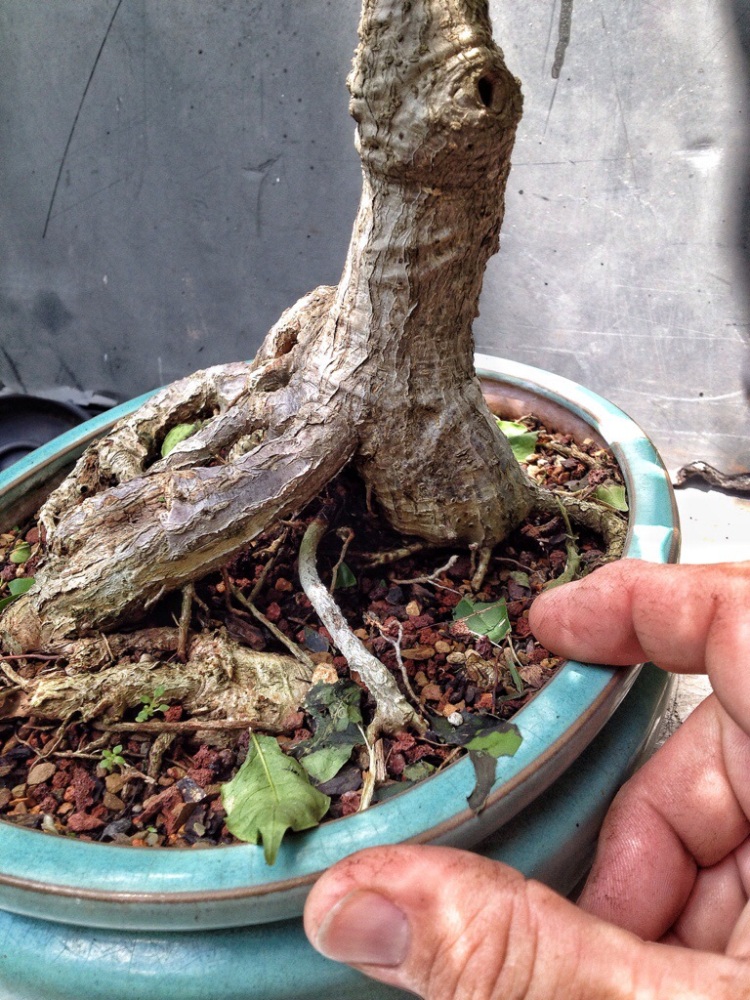 I am aware that there is a certain percentage of bonsai people out there that think roots like these are attractive on ficus bonsai.
I’m not sure why.
The basic aesthetic striving of the bonsai artist is to make a relatively small, young tree look like a big, old tree.
An old ficus tree in the ground just does not have roots like this. It’s inexplicable to me seeing roots like this on some of the piles of dog crap I’ve seen on ficus bonsai owned by people who should know better.
Young ficus trees may have funky roots but big, old trees (any trees for that matter, not just ficus) are being pushed down by the force of gravity and the basal roots (the nebari) tend to fuse, flatten, and spread and will look remarkably similar across species.
I should note that I’m not talking about aerial, prop or properly done exposed roots.
I’m talking the nebari.
This is where the story of a tree begins. The foundation and start of the story we are telling and illustrating for our viewers.
(The nebari is not to be confused with the focal point, although the base could be the focal point, which the focal point is first place the viewers eyes should fall, i.e, a big Jin or Shari)
If the illusion of a big tree fails at the “ground” then no matter what else you do on top, the mind will see it as a little bonsai and not a big tree.
So clean your bottoms!
Sorry, excuse my ranting, but someone had to say it.
Where was I?
The height of this tree, right.
The trunk is pretty nice actually; it has some interesting movement and great taper.

But it straightens out at my index finger (coincidentally, indexing the straight part. Whoever called it an index finger first was a genius. Imagine how hard and funny things would be if we had to point at things with our thumbs. We’d all look like politicians pretending to show how cool we are at a stump speech in Peoria).
And to make matters worse, there is no lower growth at all. 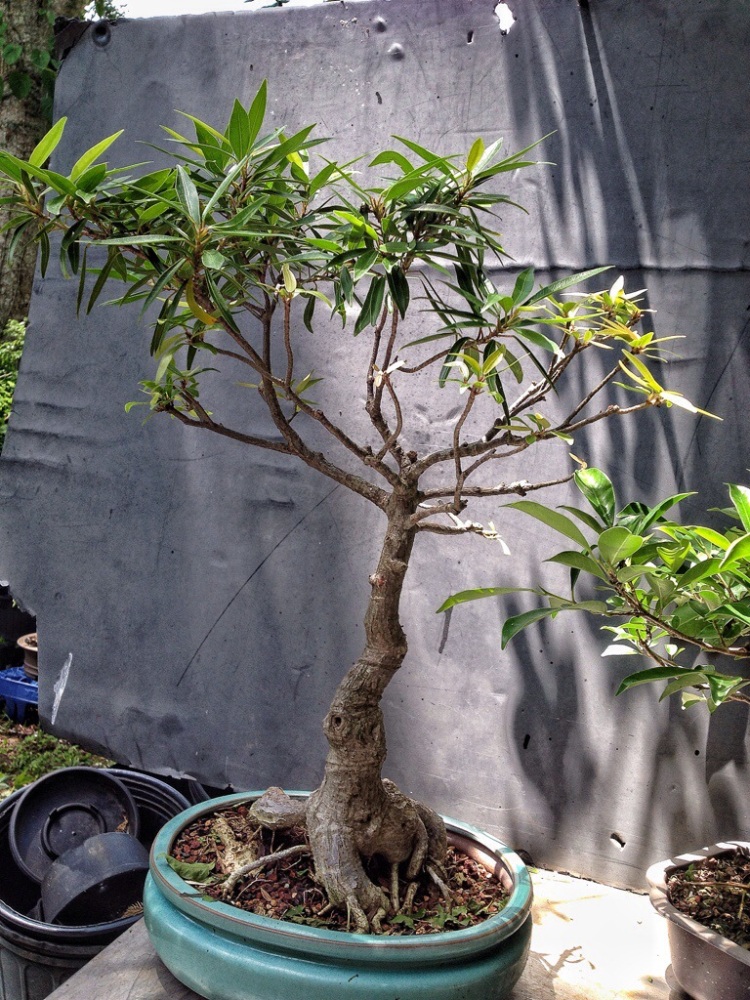 It kinda looks like a chimney sweeps, uh, chimney sweeper brush thingy.
Ok, I’ll need to look that up now, or else it’ll bug me.
What is the tool a chimney sweeper uses to scrub chimneys?
Well, after an exhaustive, hours long research session about chimney sweeps and their child “apprentices” and the deplorable conditions these “apprentices” lived and worked in, I’ve found out what it’s called.
It’s called a Scandiscope and was invented by George Smart. It is a long, segmented rod (like a two piece fishing pole) with a brush at the end made of whale bone splines (Modern day splines are steel). The rods were hollow with a cord passing through the middle and could be made rigid by pulling that cord. It was invented to save these poor children (ages beginning at 4 yrs of age) from a short, dirty life with nothing to look forward to except an early death from any of the various hazards and diseases common to a child sweeps life.
Look it up, it’s the worst thing I’ve read about the beginnings of the industrial revolution.
Thank you Mr. Smart and your Scandiscope!
Back to my Scandiscope bonsai (that could be a new style!)
As I always do (you should know better by now) I’m going to start with the roots and make them more believable.
And I’m going to be brutal, so if you have a queasy stomach, avert your eyes.

Wow, it’s like a Pink Floyd song.
And there is a monster root under the soil here. 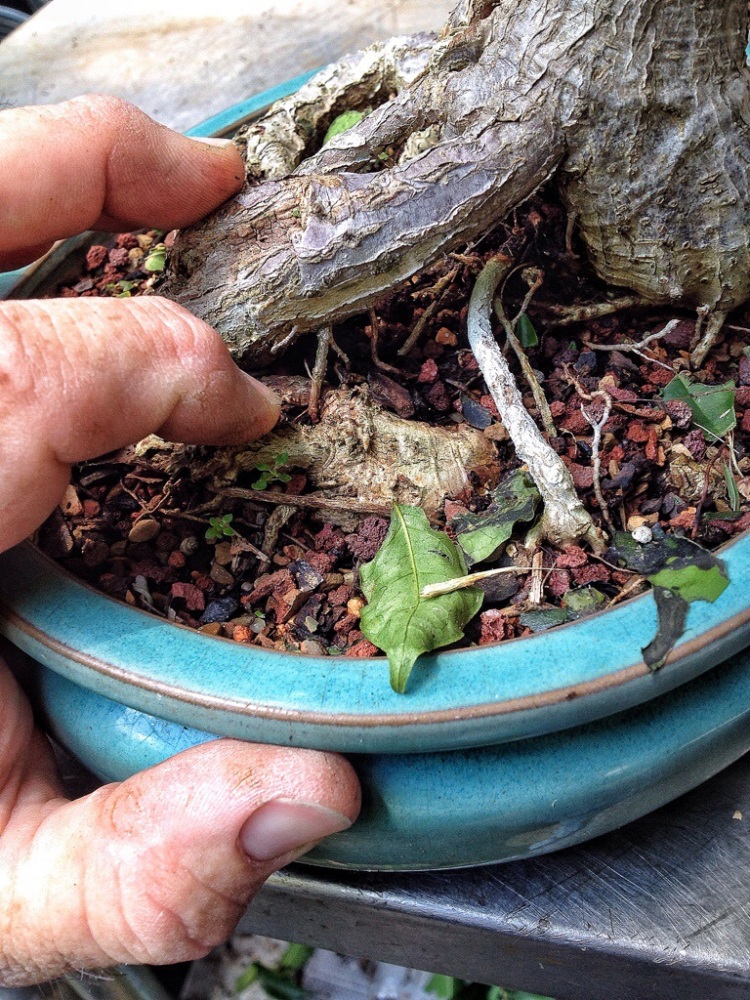 At least this one is in bonsai soil.

Not like the mud I had to play in in that last post.
Let’s see what we have now. 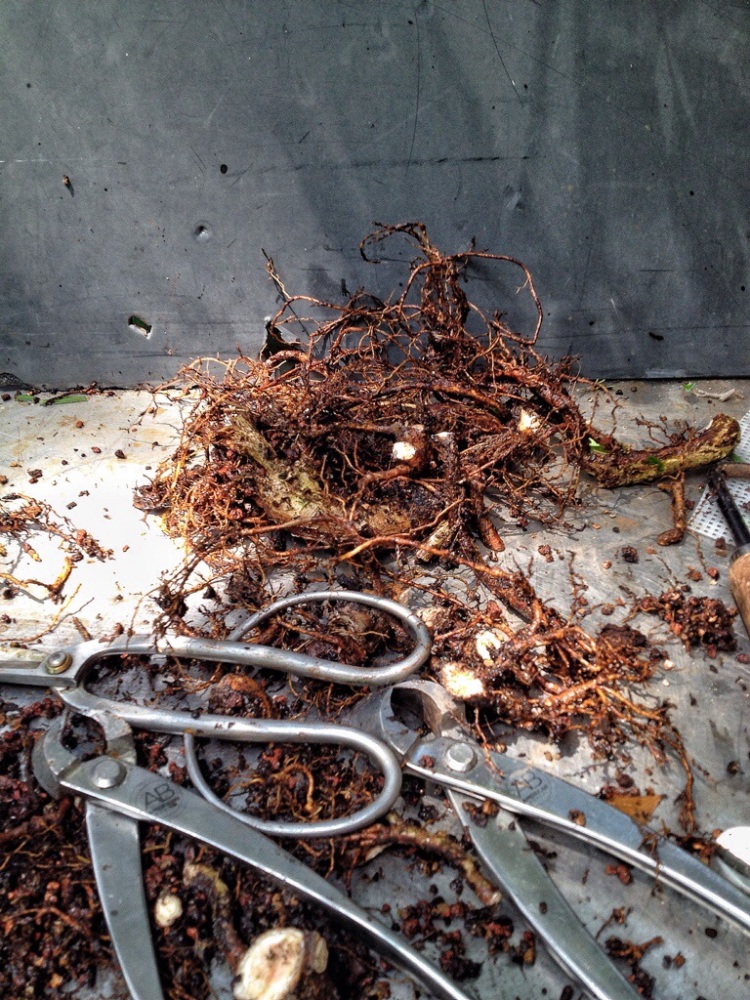 And there you go.

As you can see, I removed all the big roots from underneath.
For those interested, I got two good root cuttings out of it.

The pot it was in is too big now and just not quite right. 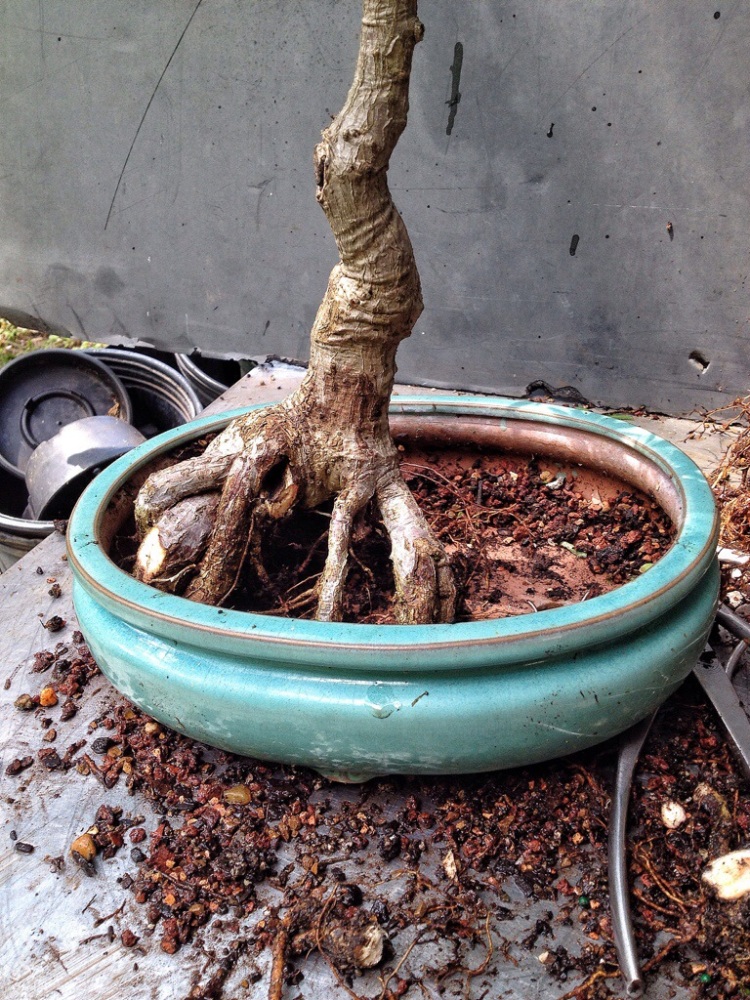 I’ve had this little pot sitting around for a while.
I think it’ll work.

I left one root that I’m not sure will stay there at the next root pruning.

It looks like when you’re playing “I got your nose” with a kid.
I’ll have to see how it develops, it may bulk up.
Now I turn my attention to the top.

Pretty difficult, right?
Well, the easiest way to start is to begin pruning off “incorrect” branches.
This one is smaller than the one on the right but it’s lower.

The first branch should be thicker.
Next, the same with this back branch.

That’s good.
I think I can start wiring now.

I need some music first…..

Ahhhh, I love me some Baby Metal.
And that has given me the rush of energy I needed.
I’m all done, what do you think?

I believe that I’ve given the tree just the right amount of dynamic balance and drama needed to keep it tall yet bring the green part down into the boring, straight part of the trunk.
And melding the pseudo ellipse of the flagellating…..wait, I need to prune off that one branch. 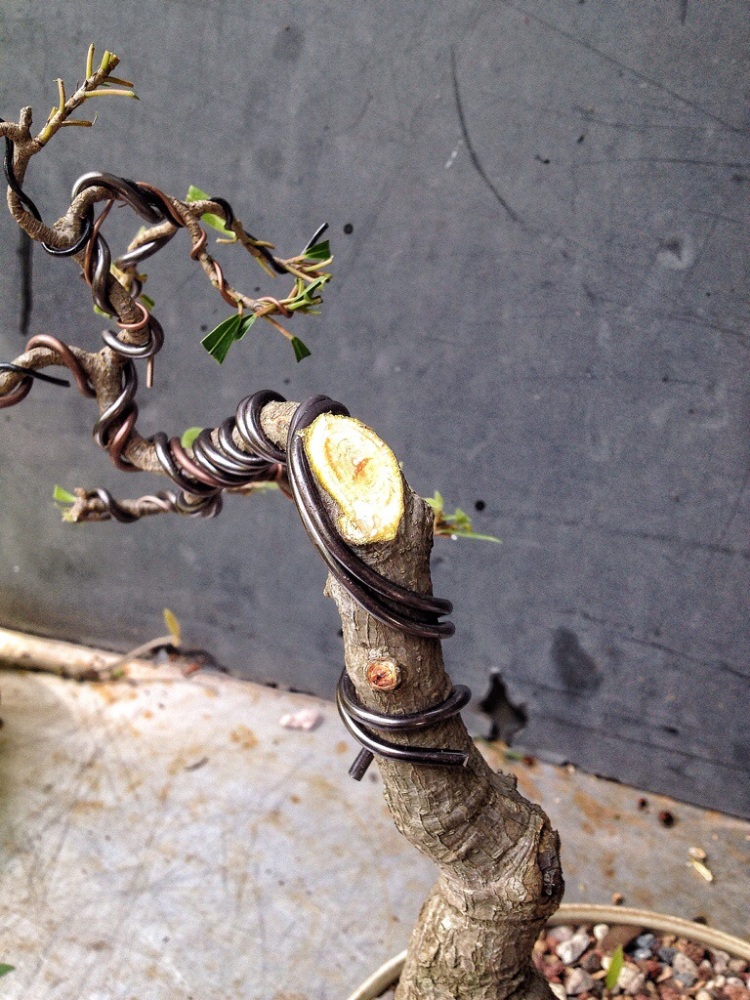 That’s better.
And we have the front. 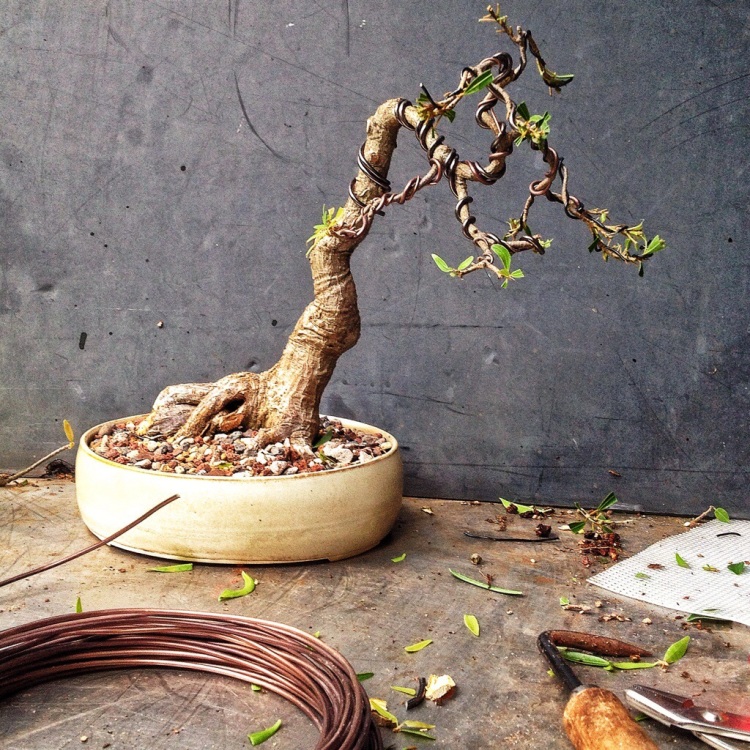 The side and side. 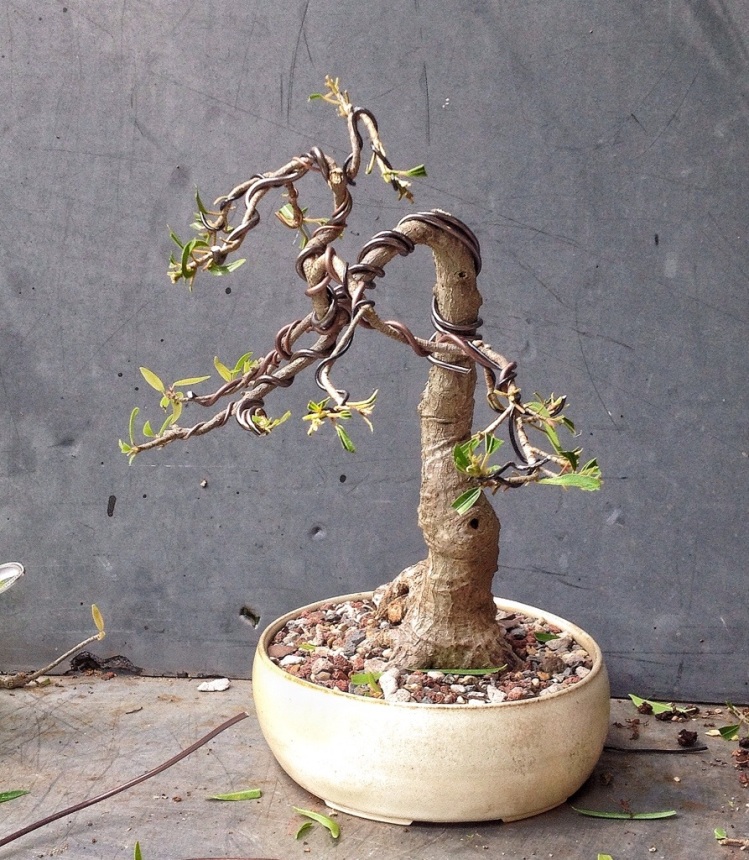 It could go in a round pot but I seem to be out of them at the moment.
I think it worked out well. We go from the Scandiscope style with Pink Floyd roots (“The worms ate into his brain…”)

And that last pic is SO going on Instagram. Right now actually.
Hold on, I’ll be right back.
And with that, which you’re probably believing that the worms are eating
my brain, I bid you…. Chim chim-in-ey, chim chim cher-ee, chim cher-oo!