Day two found me in London and having some serious zone envy.
Sorry, London , Ohio.
One word: Larch.

My host Mike had these for sale (he’s having a big bonsai yard sale on Saturday June 21st) and I was drooling.
They weren’t lasciviously large larch but they were adequate.
I Can’t grow them in Orlando though.
I did get some trident maples.

I wish I could have brought this ponderosa pine home too.

Anyway, time to go to the Columbus club.
And, at the local fillin’ station, some sticker shock. 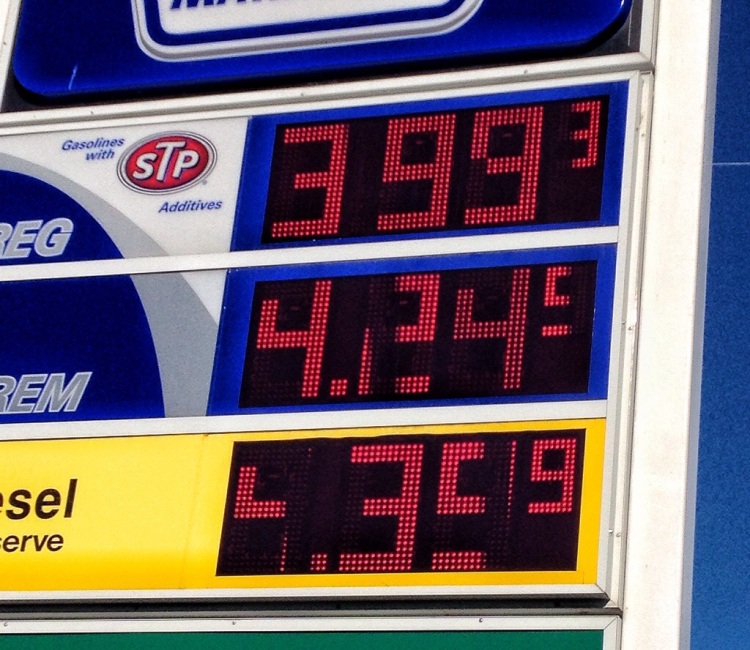 When I left Florida, gas was $3.35 a gallon.
Damn.
No wonder I don’t see any Starbucks around. No one has any money left over from buying gas.
My schedule for today: a BYOT workshop in the morning and a ficus microcarpa workshop in the afternoon.
The Columbus group meets at the Franklin Park Conservatory, which has a bonsai collection of its own.
Mostly tropicals, to my surprise.
The morning BYOT workshop had quite a variety of trees; from ficus, to crab apples, juniper to zelkova to spruce.

And a very familiar species, ilex vomitoria “schillings”. Someone’s been reading my blog. 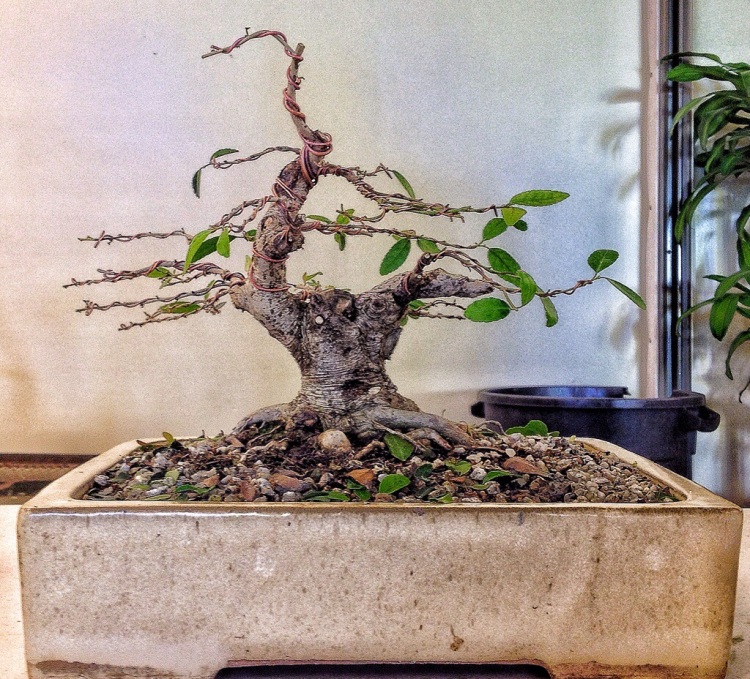 This tree came from a landscape nursery in Tampa originally.
It was an interesting mix of trees, to be sure.
Then it was lunch and a tour of the collection.
Probably one of the best ficus benjamina I’ve seen. 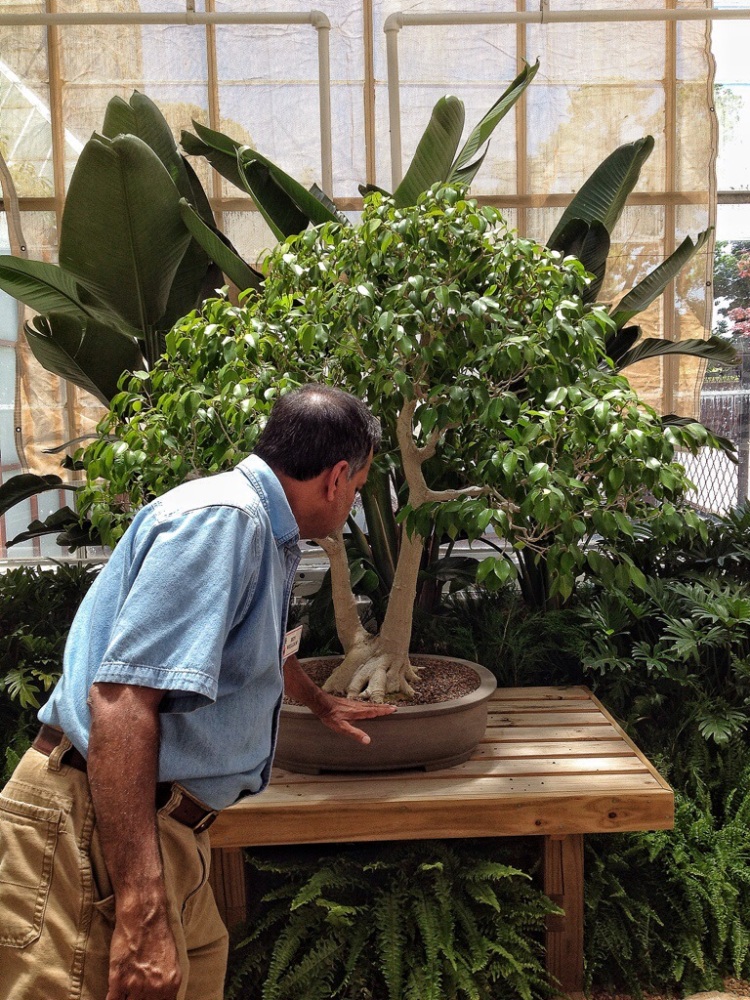 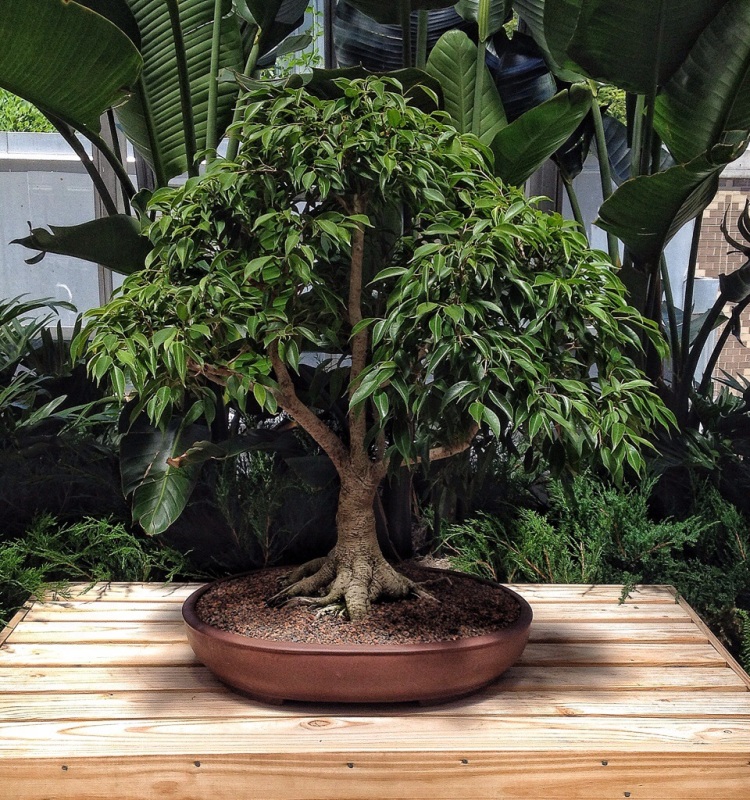 And many more, including a buttonwood among others.
In the outside collection there were junipers, hornbeam, this great bald cypress.

And a pretty cool European beech. 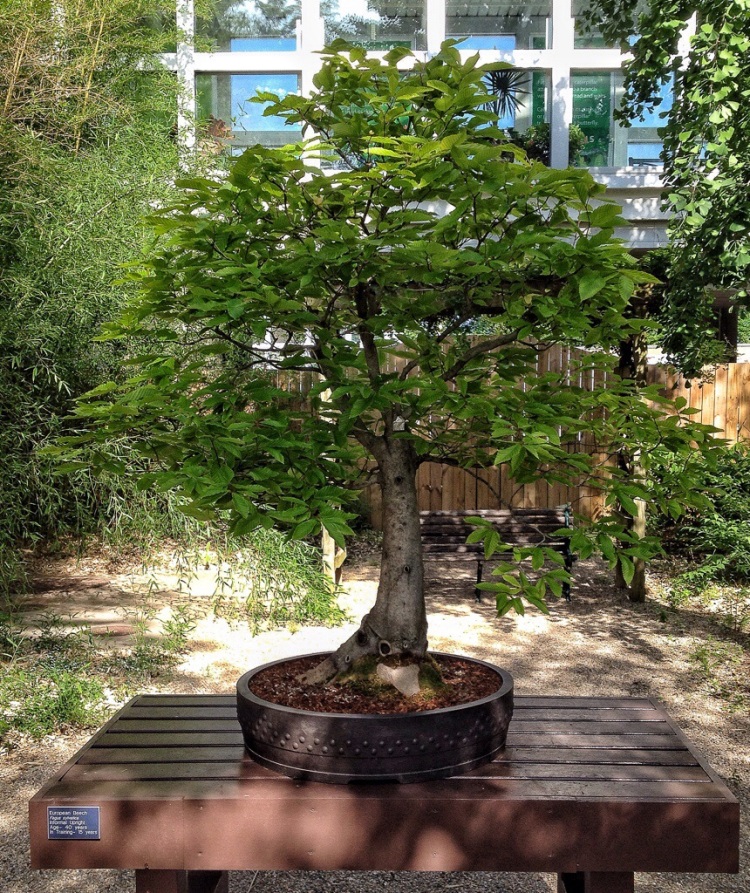 Whoops, do I hear a whip cracking?
Back to work, time for the workshop on the ficus.
I took several pictures but I like this one best. 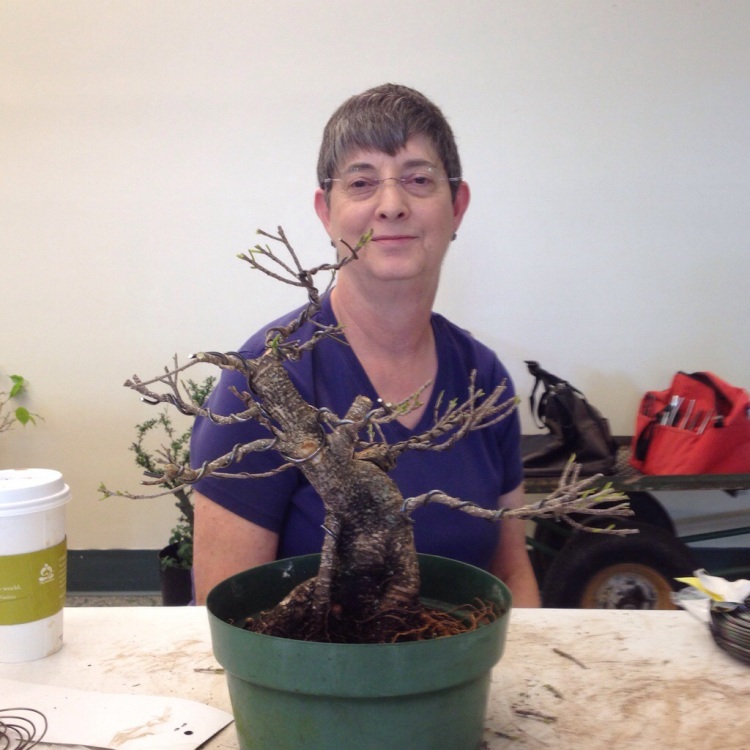 She was a good sport, she didn’t want here pic taken, in fact, she tried to move out of the way.
And now she’s on the blog.
I’m a meanie.
I did give away some t-shirts from the American Bonsai Tool Company.

And we had a very good overall bonsai time.
Then it was time to go back to Mike’s house and relax.
I watched as Mike watered.
I love these trees, I think they’re silver maples.
Nice bark.
We also found some, ah…..beverage.

And I found a guitar!
Woo hoo!

And Mike gave me the tour.
This is where he, um, overwinters his bonsai.
I was hoping I wasn’t still here when the DEA raided the place. 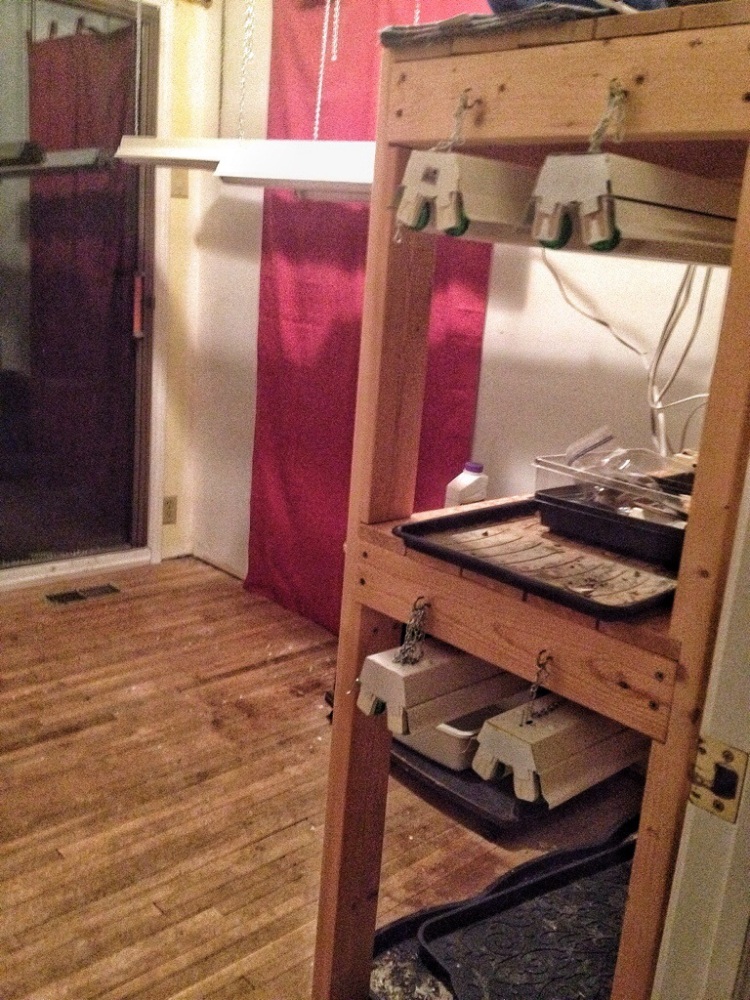 Yeah….
After a good sleep and an early morning (and filling up with the way overpriced gas) I was on the road to Ft. Wayne.

This is downtown Van Wurt. A sleepy (read that as- hit every light red) little town on the way.
After arriving at the Kittle Homestead I was whisked away to a soon to be disclosed place for a soon to be described task.
But you’ll have to wait a bit for that post. The secret day three post that I teased you all with in the last post.
Sorry.
Day four!
In the Kittle kitchen they have these pots and pans hanging from the ceiling.
I just love that. 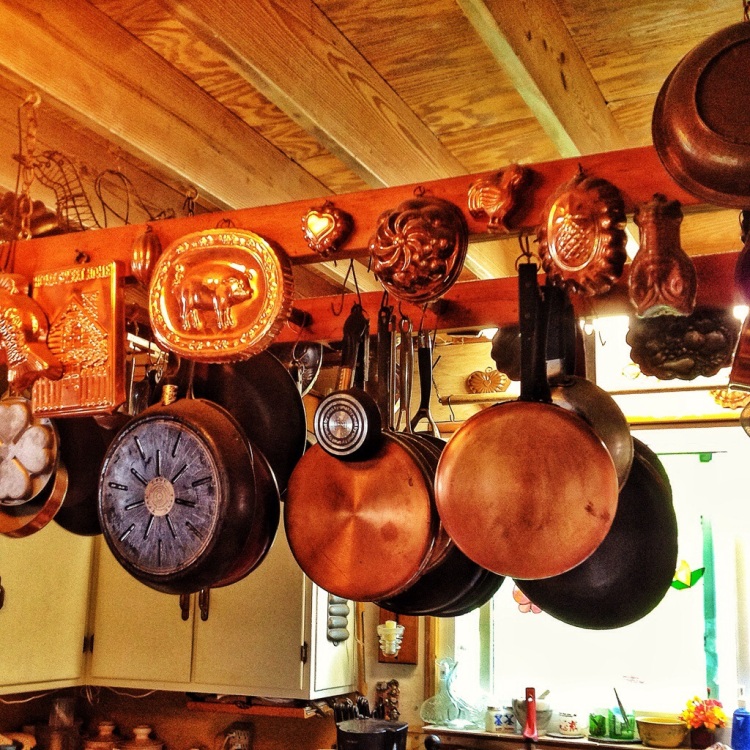 And I got to eat some organic, fresh eggs for breakfast from the Kittle chickens.
After breakfast I decided to wander a bit around the property.
This is an oak.

And, surprise!
A bald cypress in the ground.

Then, a short, quiet respite before the workshop begins.

Sitting under a tree in the warm, Mid-June breeze, swinging lazily on a wooden rocker, not thinking of anything.
But then, it was time. High Noon.
Four words:
The workshop was intense.
First, I had brought a variety of trees for people to choose from.
The trees:

Then, they were encouraged to bring there own.
It began at noon.
It ended at ten pm.
One guy had a total of five trees, another, three, some people had two and on and on.
I can’t give you an accurate tally or species count but, there were ficus..

….and buttonwood, and juniper…. 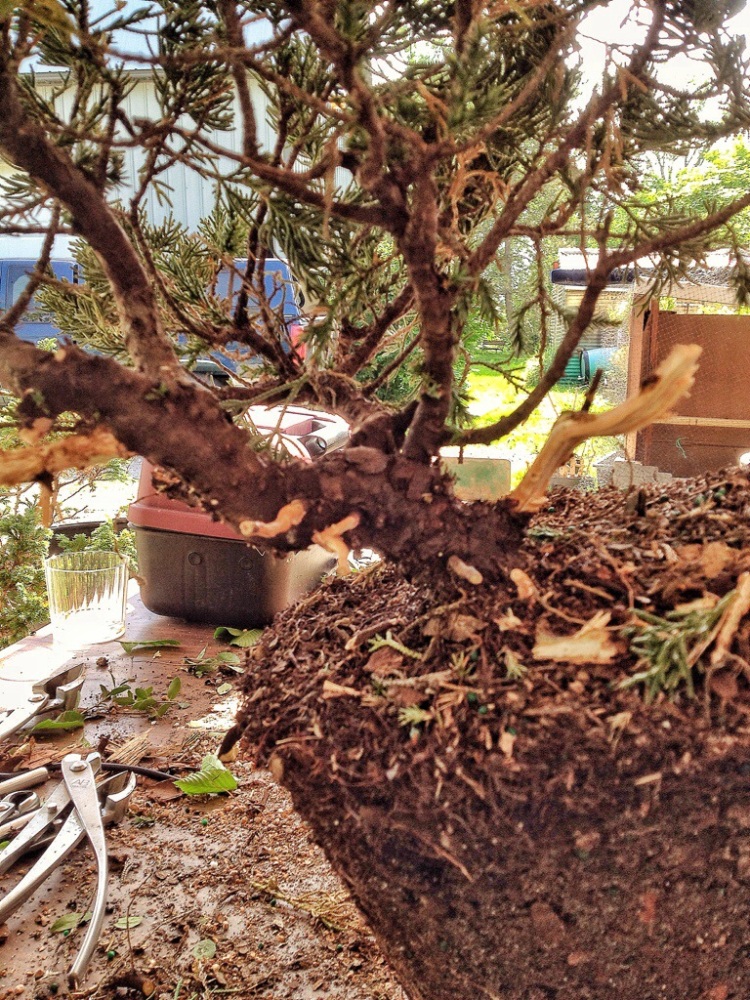 …….did I mention ficus?
At lunch I tried to clean off the ficus gunk using a special soap.

I guess pumice isn’t the miracle product we’ve been led to believe it is after all. 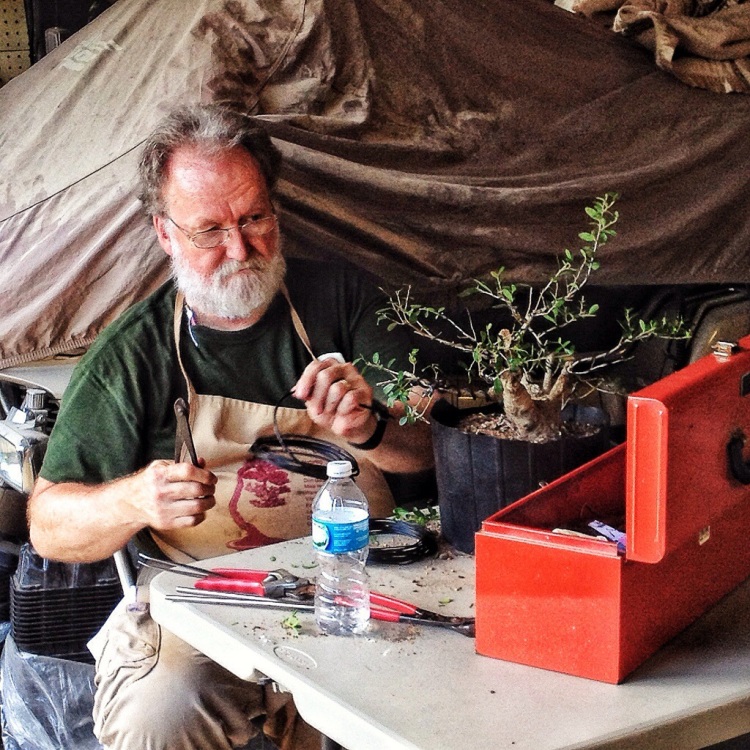 That, dear readers, is Steve Moore from Bonsai in Hoosierland (hoosierbonsai.blogspot.com) a very informative blog you should check out.
So I worked through the evening and I suddenly realized that it was nine pm. And the sun was still up.
Weird.
In Florida the sun goes down about 8:30.
I finished off my last three trees in the company of this dude, 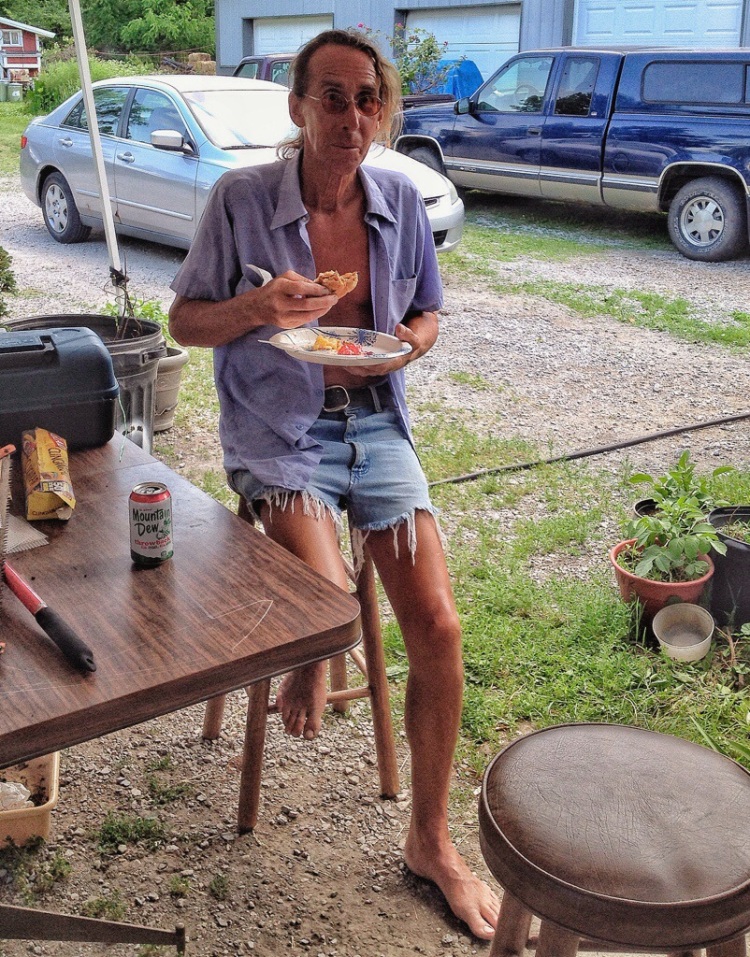 Barefoot Bruce, stayed to the dirty, gritty, mosquito swarming end.
Thank you sir, you are a scholar and a gentleman!
The last tree, at around ten thirty, was this ficus microcarpa.

Which turned out really nice. IMHO.
The next update will be on days five and six, of which I just finished number six with the Cincy club with a demo of this bald cypress.