Here’s a tree I practically stole at the Multiclub Auction the other day. 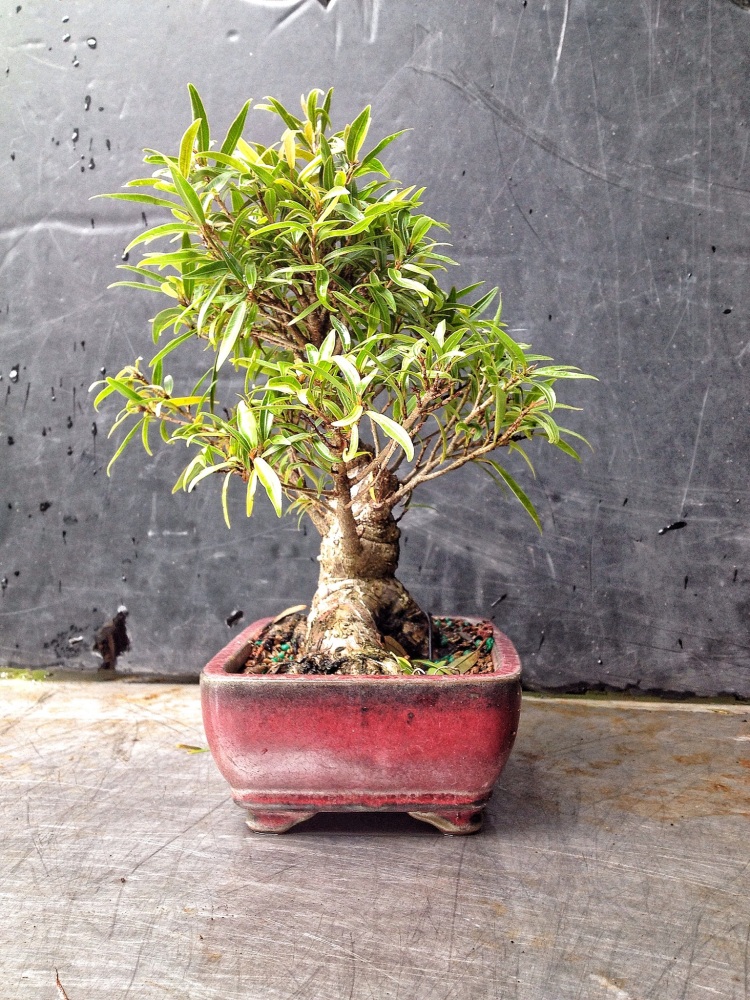 Granted, this one isn’t styled yet but, give me a minute, the tree is in there.
One flaw that most beginners wouldn’t understand as a flaw is this root. 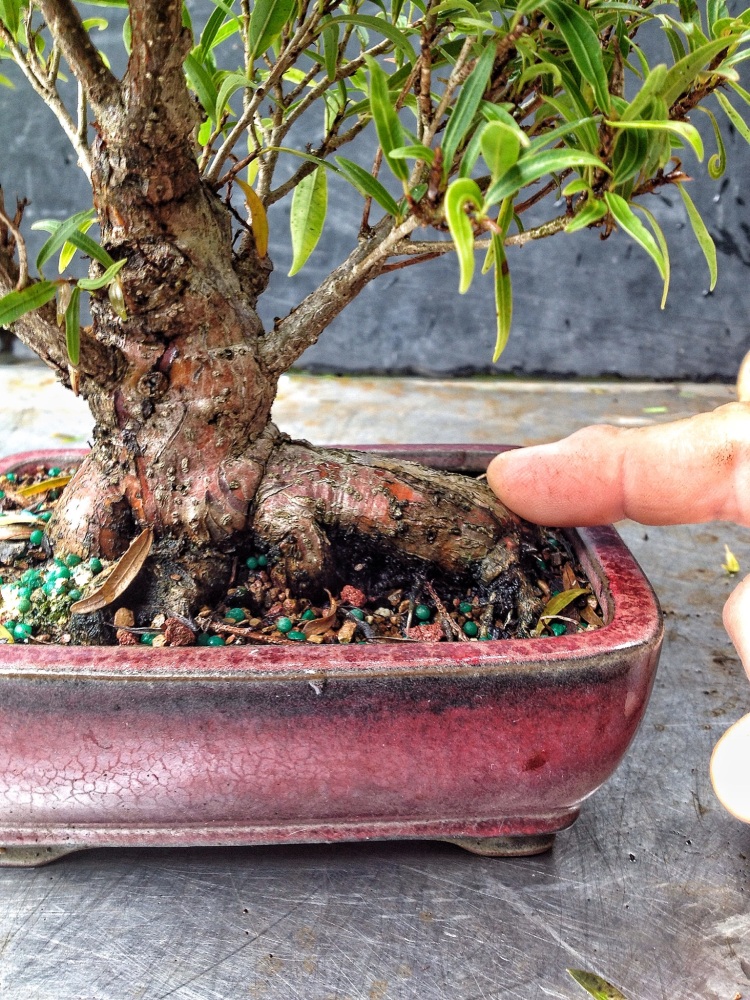 It’s true that the root widens the tree’s base but, as should be above-so should be below; there’s no taper.

Taper is one of the most important design tricks in shohin trees.
Do you wanna see how to fix it?
Sure?
Ok, let it begin then.
First, pry it out of the pot. 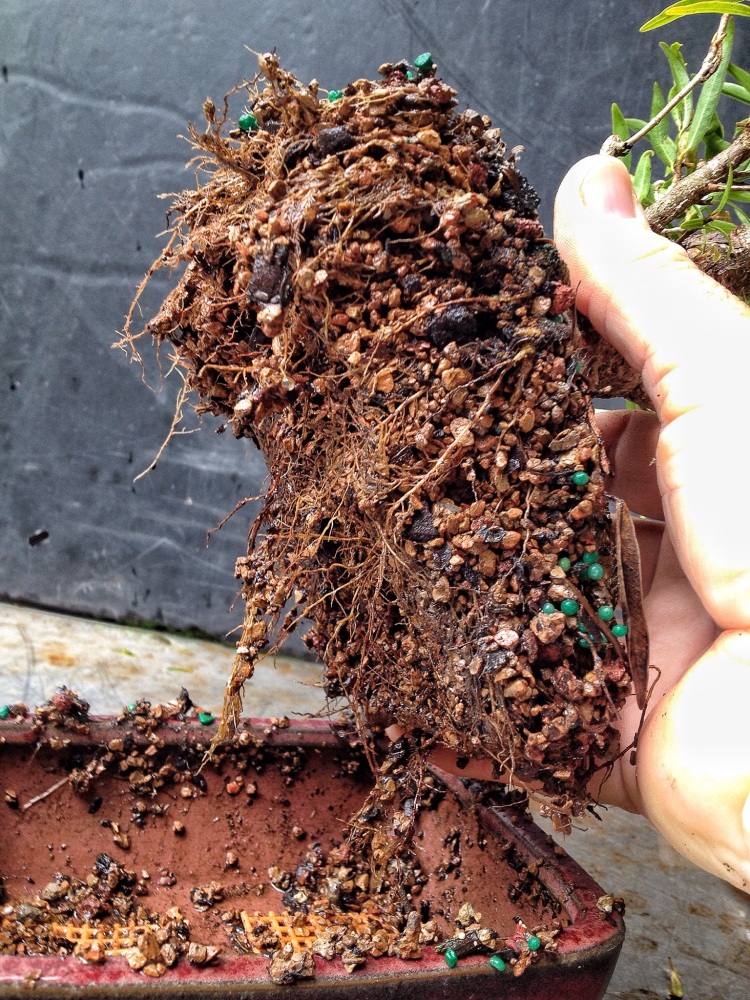 I was worried that it was repotted recently,but no, I got lucky.

It’s going into this pot.

It’s a handmade pot and this looks like it says “Eve” to me.

There’s a joke there…..I’m putting my tree into Eve’s pot.
Ahem.
I gently wash the old soil off (mostly calcined clay looks like) and trim the bottom roots.

The root my thumb is under is bent out a bit so that it’s more horizontal and radiating. It was growing down and under the trunk.
There were some square-cut roots that I shave so the transition to the soil is more even; sloping, so to speak.

And now, the Technique.
We have the root presenting itself, looking like a squid.

Oh yes, I am doing that.

Where there was one, now we have two.
To round it over a little, I shave off the top edges of the split. 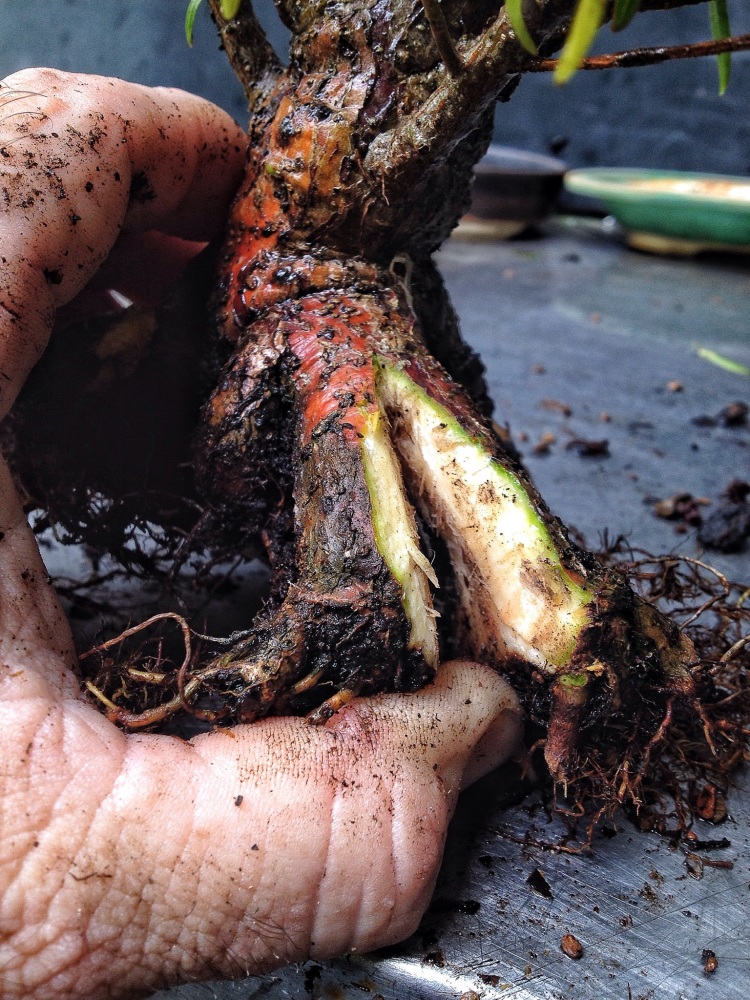 Which is hard to see, so I shall make for you a diagram.
The split root, in cross section.
Before. 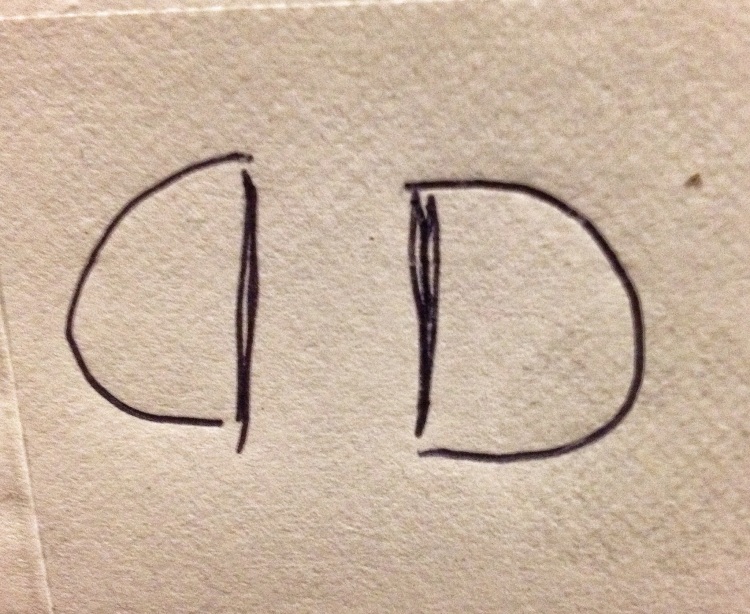 And after the shaving of the edges. 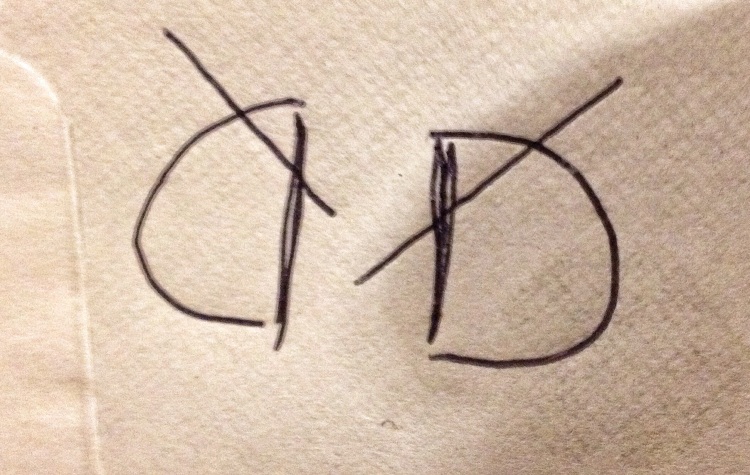 One could say I even beveled.
To keep the two halves spread, I take a chopstick and wedge it in.

Then trim the chopstick down.

In the meantime, my apprentice prepared the pot for me, cleaned it, secured the drain holes, placed the tie-down wires and filled it with soil. 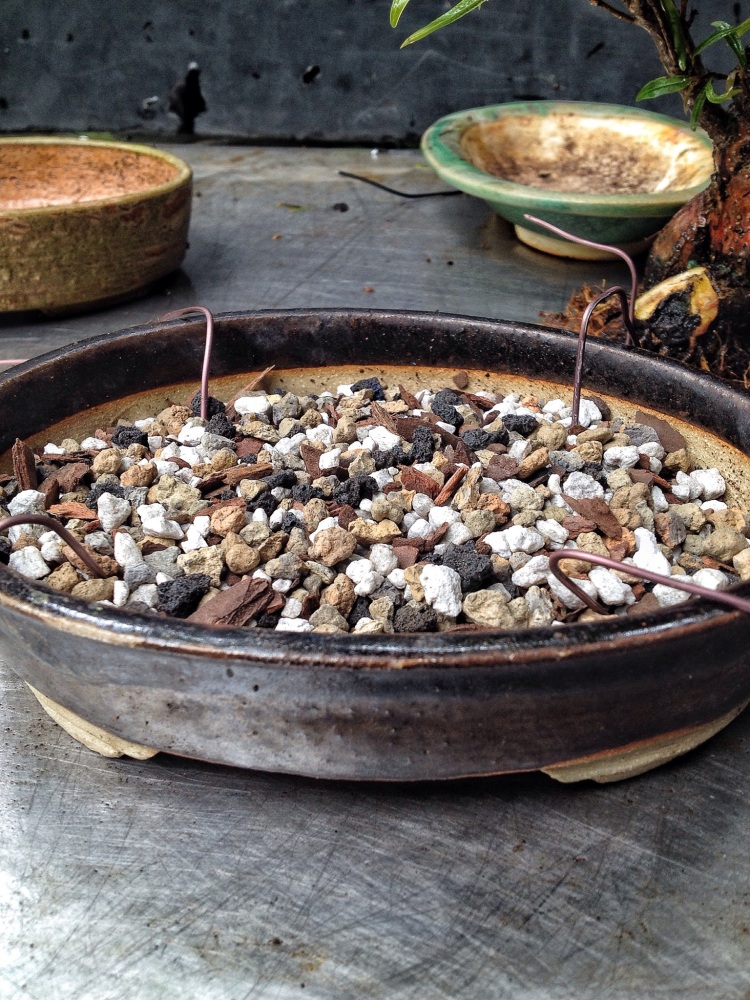 I wish.
After I did all that, I put the tree in the pot and tied it in all by my lonesome.

I think it looks good in that pot.
I purchased it at the last Bsf convention for $15. It, too, was a steal.
There are some astute readers out there who are now wondering about the different looking soil mix I’m using.
You all will have to wait until the next post for that mystery to be revealed.
This tree was growing strong.
The top is pulling all the energy and weakening the bottom branches. 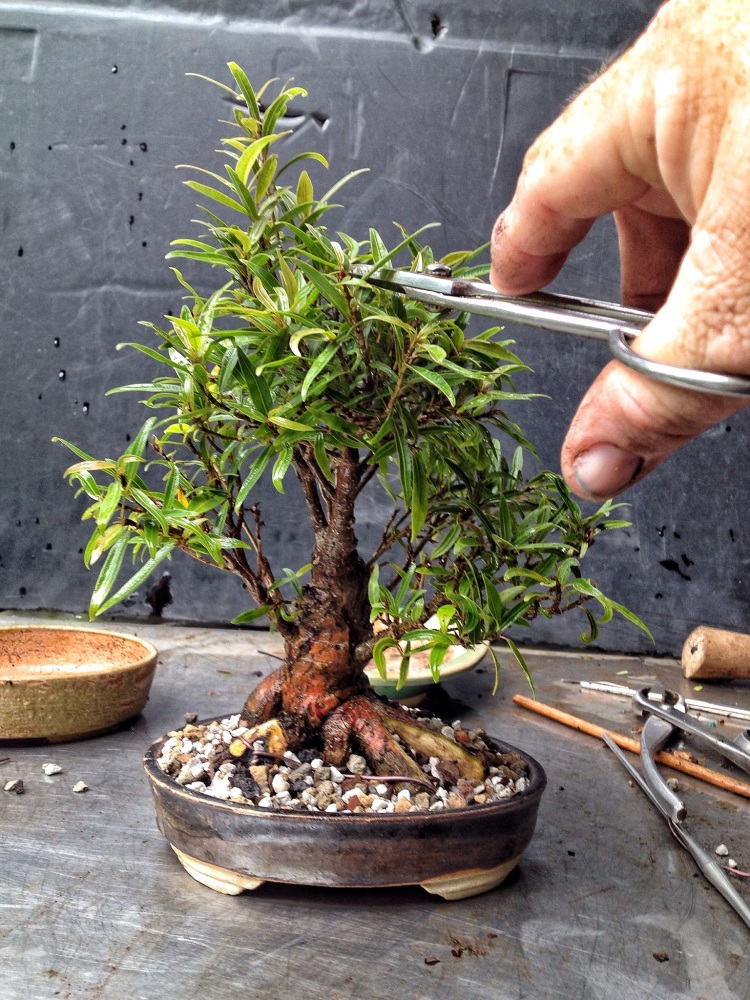 Which is typical, often you’ll see the bottom branches die back on a neglected salicaria.
I’ll have to nip it in the bud…I know, I know….groan.
I go through the first branch on the viewers left and trim back so there’s only two branches at every junction. 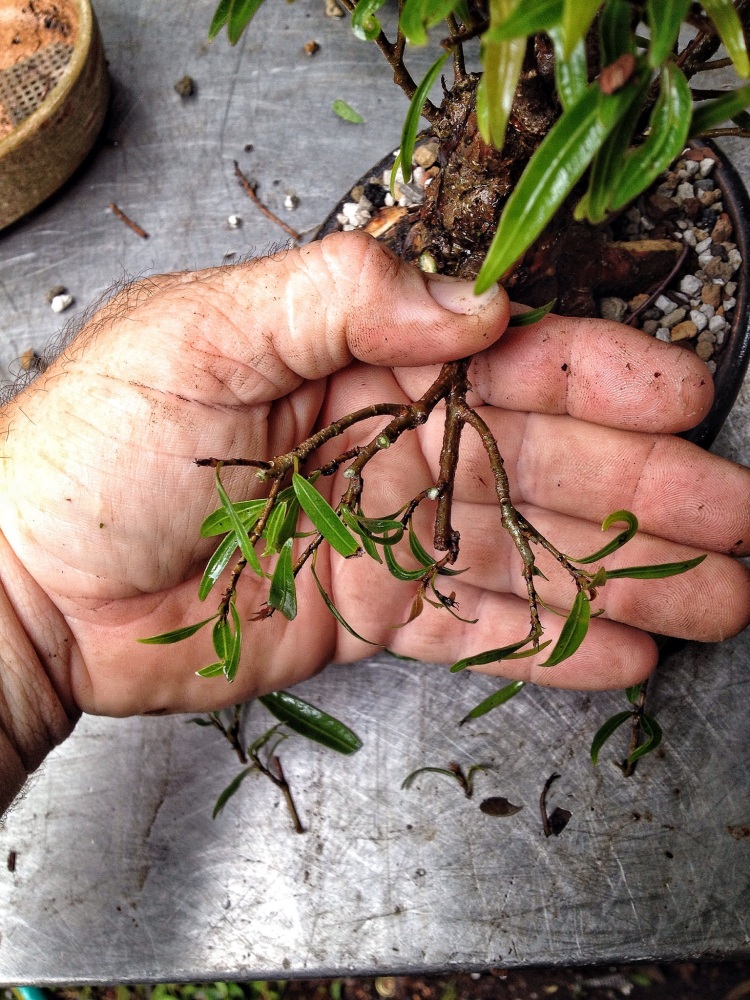 The first branch on the right I will remove. 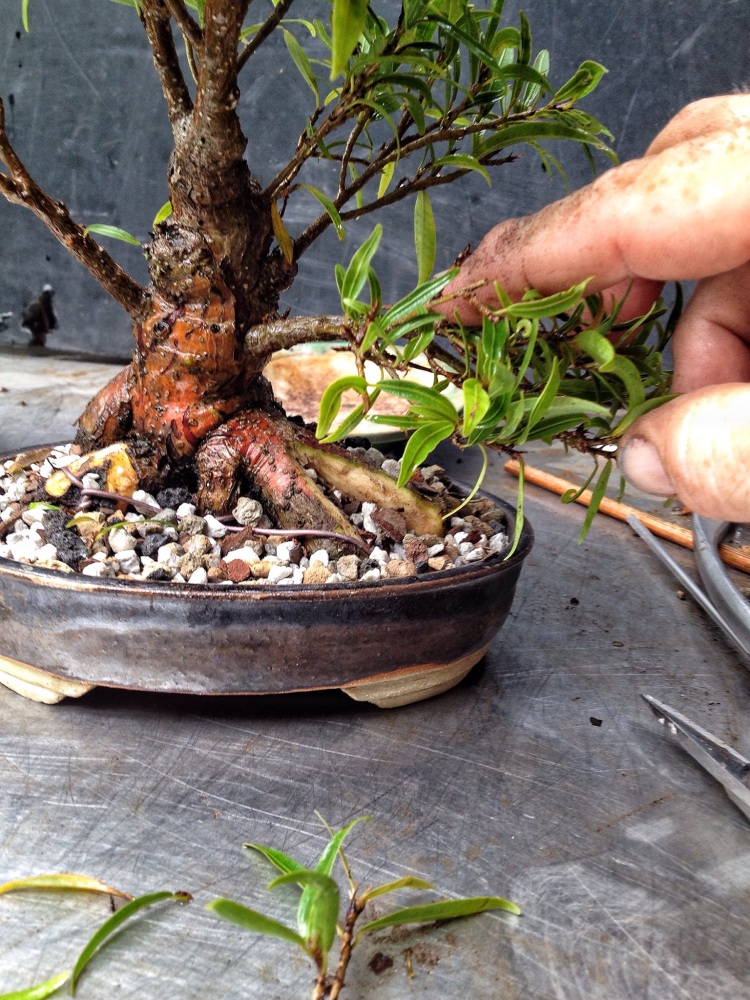 It’s too low and, since I have the big double root on that side, it will literally and figuratively overshadow it. 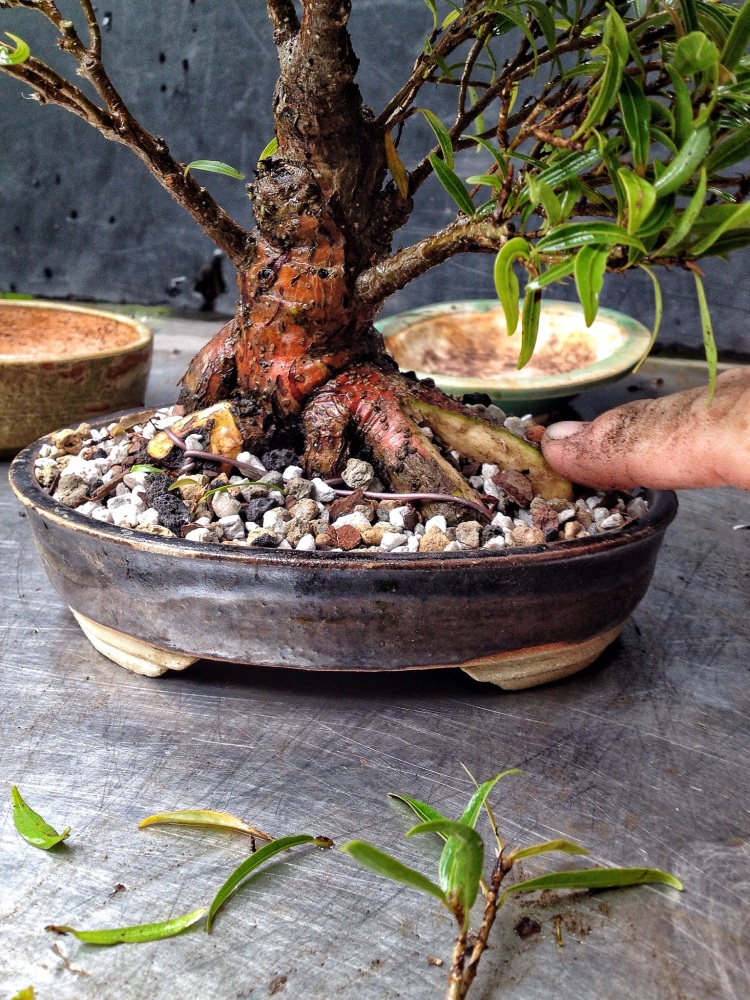 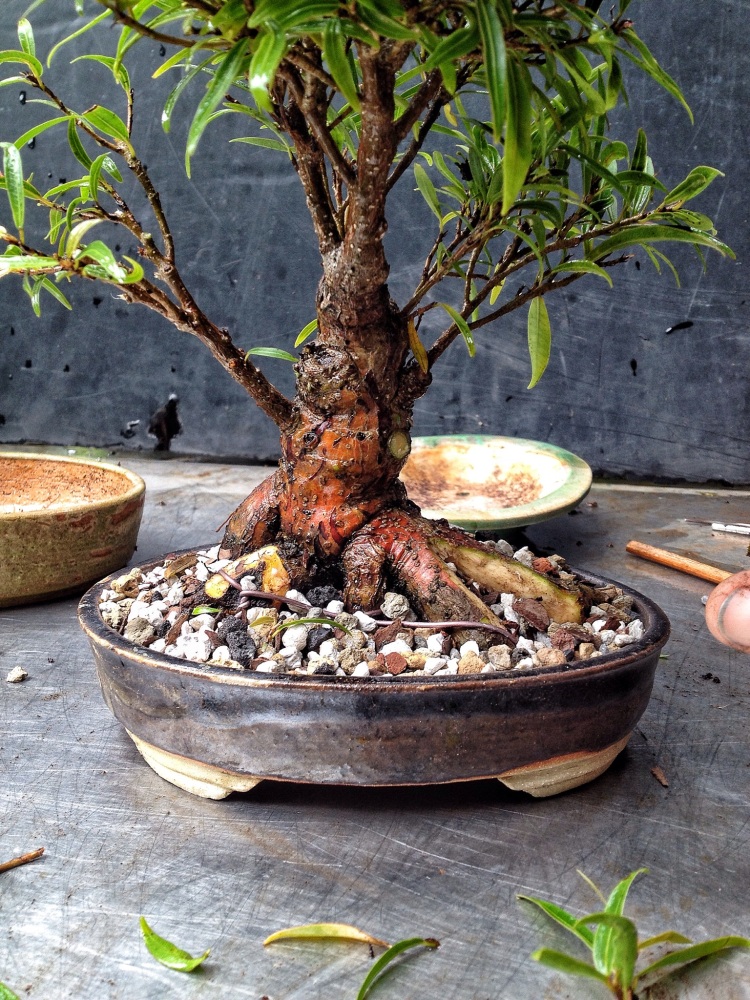 Now I have to decide where to cut the top back to.
Here?

Nah, too low.
Up here…..somewhere, Hmmmnnn

Some more trimming and defoliation. 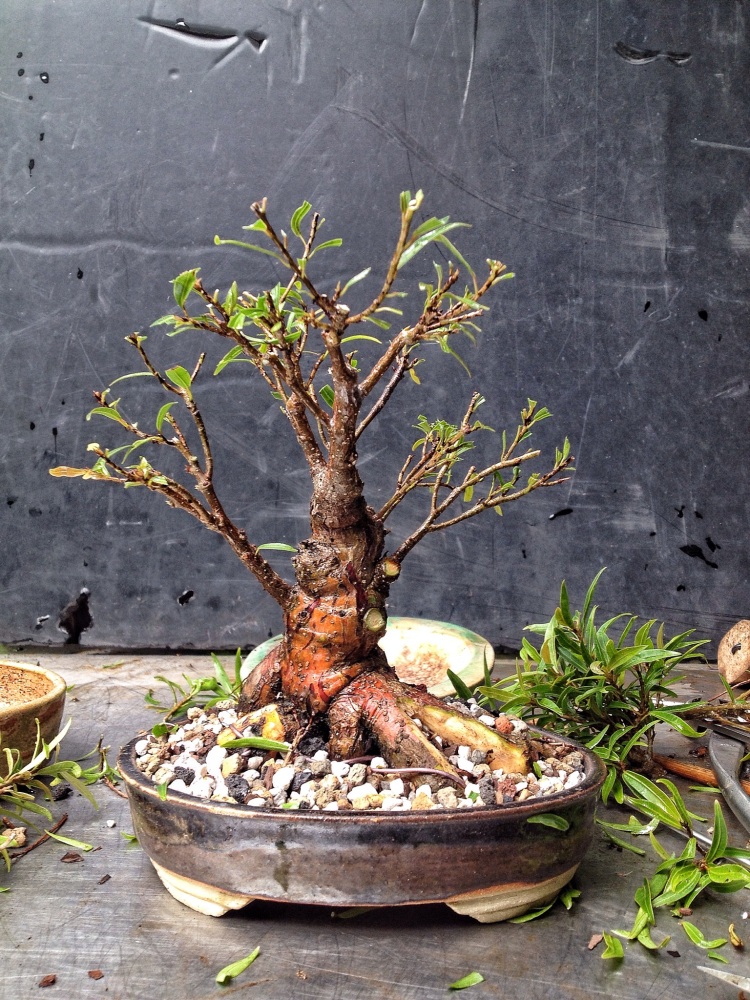 My last step is to wire.
Before that, I want to point out that what I did with the roots in this post is generally done only with ficus (and strongly growing ones at that). Although I have seen it done on trident maples before.
You need a tree that can handle severe root pruning, like a ficus, and that will callous over the cut ends.

Ready for the finished tree?
Here you go.

…couldn’t see that, with just a little pruning….

……and a little wire, you could get this tree as the end product. 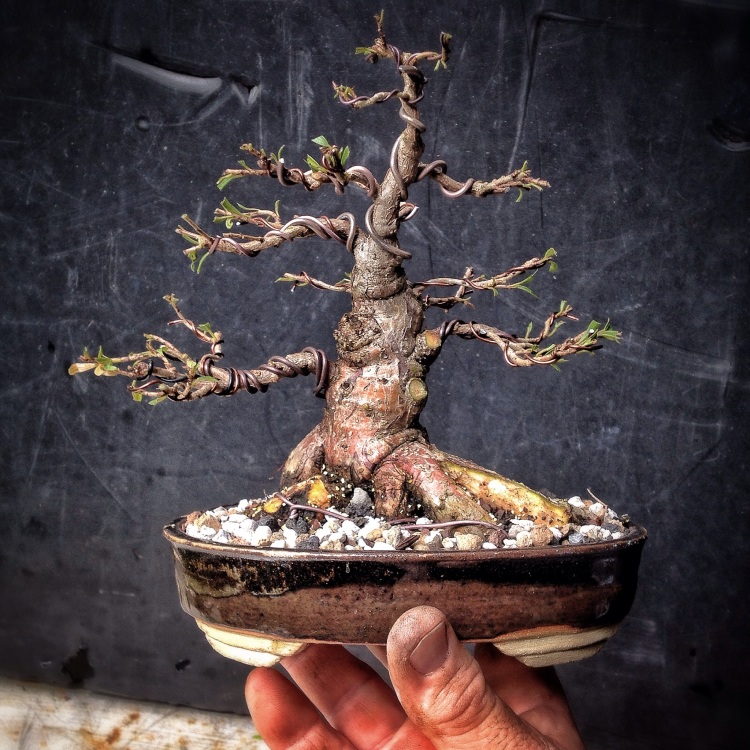 I’m happy.
The next post will be on a tree I took to the auction that no one bid on.