If you’ve been reading my blog of late
you’ll know that I recently attended an auction that I have been calling “The Auction” (I know, that title is very creative).
This was the first time I brought trees for auctioning purposes and, of the four I offered (and of which I had put all my hopes on selling to pay my mortgage next month) I only sold two. Looks like it’s ramen noodles and peanut butter for a while.
This is one of the trees that didn’t sell.

It was one I was sure would sell and, in fact, even the auctioneer, Reggie thought it was one of the better trees; he even saved it as one of the last four to be bid on.
Not that I’m really complaining, I actually didn’t want it to go. Maybe I was projecting a negative psychic vibe that everyone picked up on and it scared them away.
You see, I have this problem with letting my trees go. I fall in love with them and don’t want to sell them.
You can understand that, right?
Or maybe it was the plastic pot?

Or the big hole in the front or the fact it’s a ficus benjamina “too little”?
I like it myself even if I’ve neglected it in the last year; I put it into the plastic pot last summer and only just trimmed the top the day before the auction.
I think I’m going to put it into that really shallow unglazed pot sitting, precipitously, in the front there.

I should give it a proper pruning too.
What? Yeah, I know…I can tell by how the electrons are twitching beneath my fingers that you just don’t believe I can fit the tree into that shallow of a pot.
Watch, and learn. 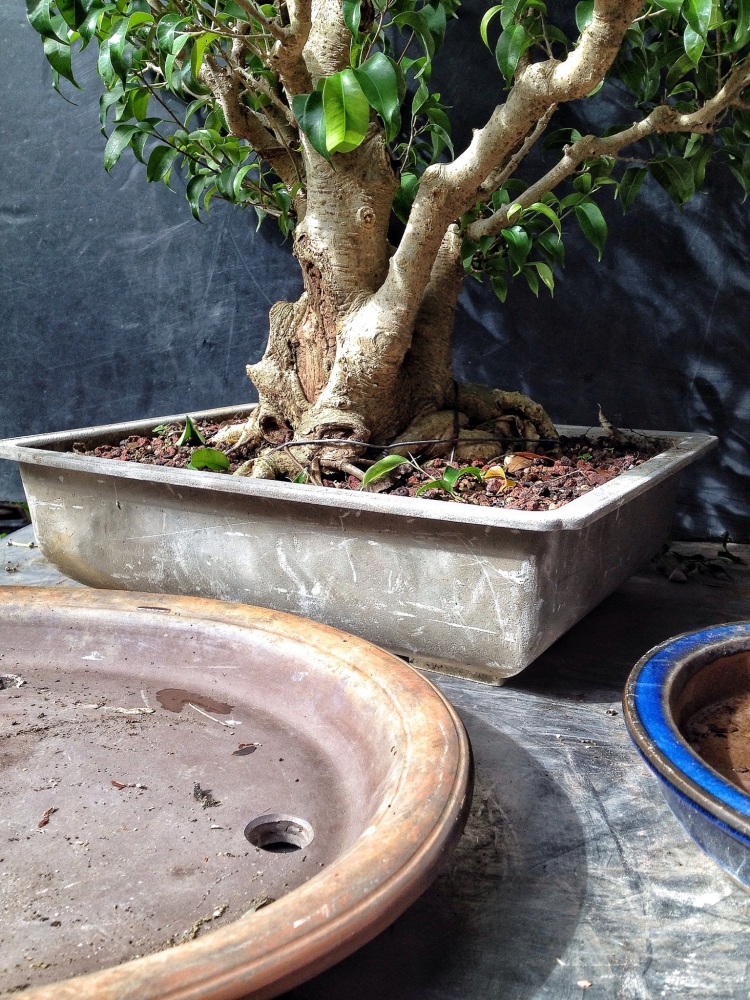 First, the pot.
I’m not sure where I got it but it sure has great patina. Or dirt, rust and lime scale

It seems old and it’s made of fine, dense clay, but what do I know.
I sent some pics to a friend of mine, Ryan.
He’s a crazy pot guy.

He agrees that it’s odd that there aren’t any feet. 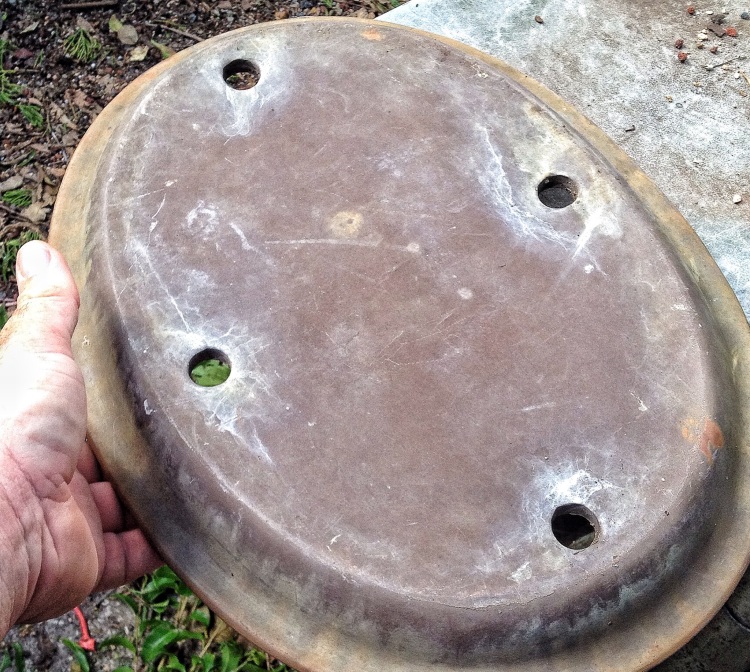 Or markings/chops on it either.

His best guess, and I quote,

That’ll work for me. His blog is really easy to find: japanesebonsaipots.net.
Pot discovered.
Well then, get to work Adam, this ain’t your break!
We have tree. The front is around here somewhere.

Even though there’s a big wound in front, I still prefer this side.
For one, the other side is uglier. 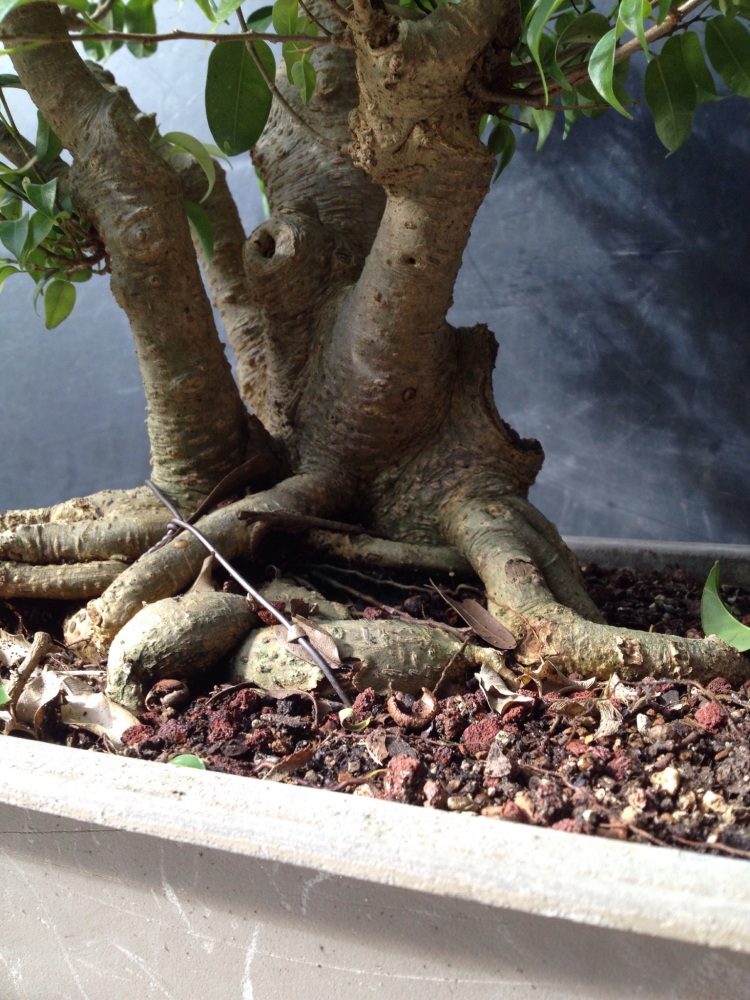 It gives the tree (any tree really) some easily accomplished age and character.
What do you think?
Let me prepare the pot and put some tie down wires in.

And now I’m going to mix some soil (you’re gonna like this next bit).
I got, in the mail and totally unsolicited, a package from BonsaiJack.com.

He had read something I said on Facebook and sent me some of his offerings.
I figured, Hell, I write a blog, I need to test it.
He sent a quart of sifted pine bark.

Which I sifted (by hand) again to see if there was any waste.

There was a negligible amount.

I could sift a batch for an hour and then go resift again a day later and I’d still get some to fall through the mesh.
He sent a quart of black lava (sorry, the pic I took was overexposed, just imagine lava but, well, black).
A gallon of pumice. 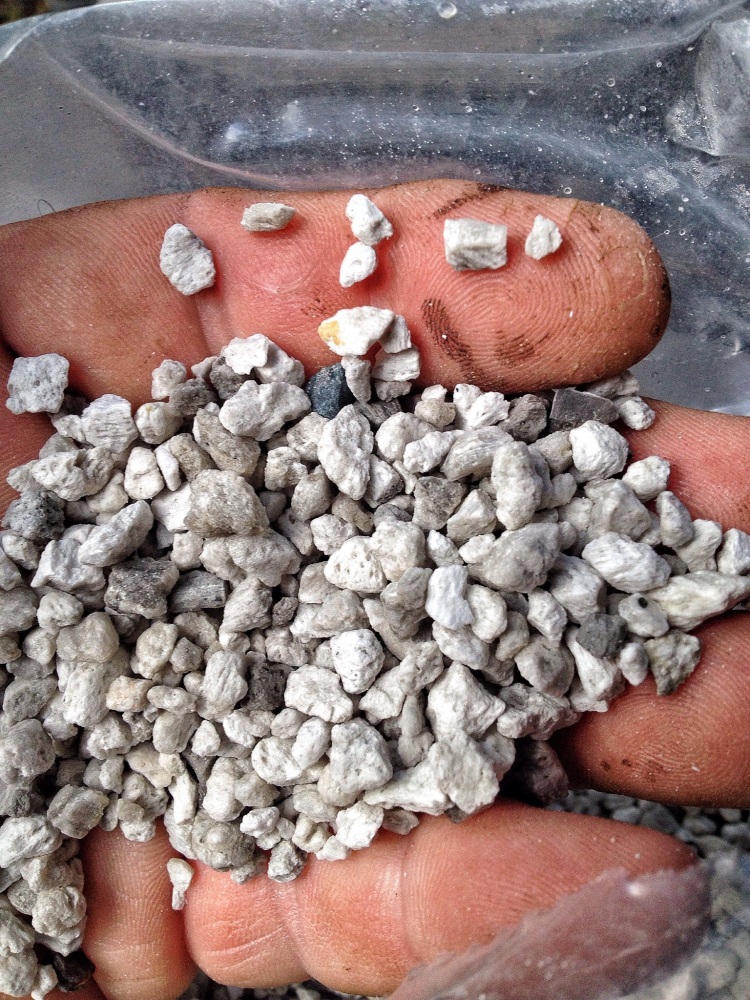 Which was washed and sifted.
And a gallon of this stuff he’s calling “Bonsai Block”. The BonsaiJack website describes it as being a high fired clay product (fired at a higher temp than regular calcined clay, like Turface).
It’s almost rock hard and has a nice look to it. What surprised me is that some particles floated.
Anyway, I mixed these ingredients (the bags and amounts seemed to be in good ratios that seemed like a “mix” soooo…I mixed them).
I added a bit more pine bark for C.E.C. purposes.
Here’s the mix-

Not bad looking, I can live with the white I guess. It’s “En Vogue” to use pumice right now anyhow.
The fact that it’s usable out of the bag could make a big difference to the average hobbyist. Many of the products and aggregate you find outside of the bonsai industry has to be sifted and washed and you lose a good percentage in the process.
Here’s an example: pine bark from a new bag.
Before sifting. 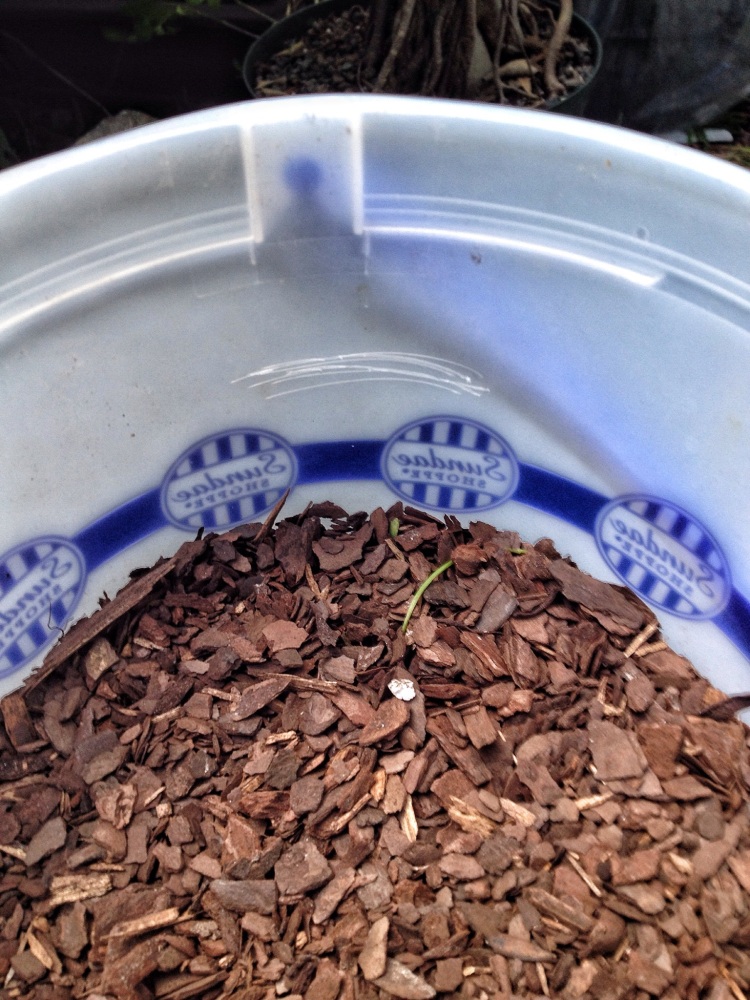 That’s about a third I lost, but sometimes you lose almost half after sifting when using the raw, bagged product.
It may cost more to buy a pre-sifted and washed product but, as they say, time is money.
The website is www.bonsaijack.com.
Pot done, soil made….I think I’ll prune next.
There was a statement that these benjaminas don’t backbud.
How’s this? 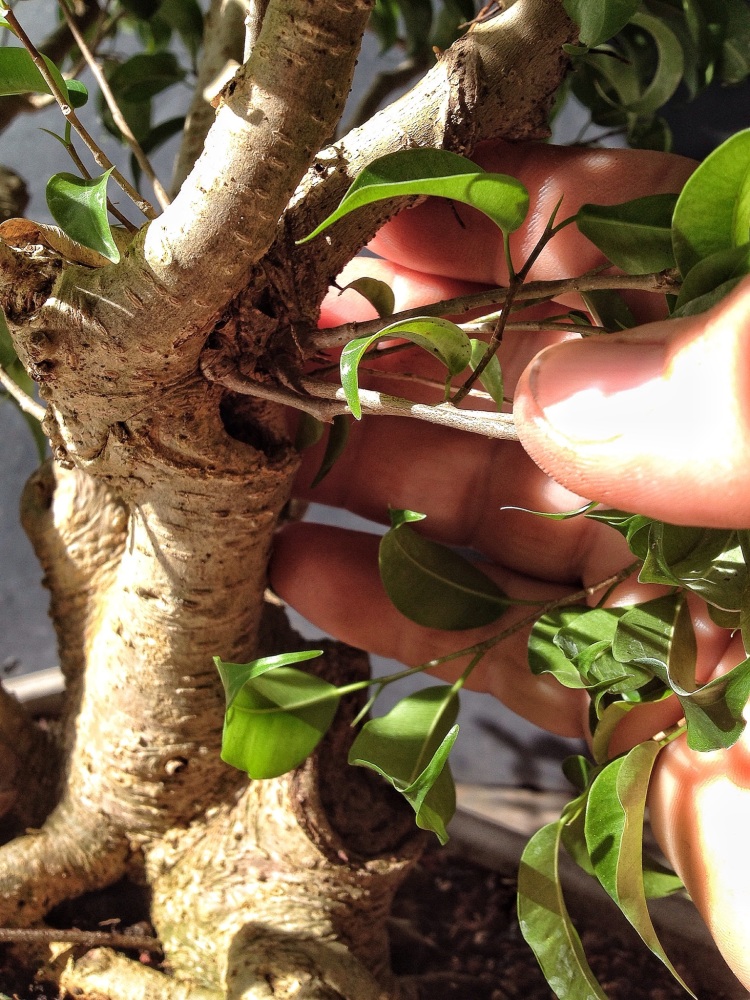 There’s so much back budding it’s annoying. All that (except one shoot) goes. 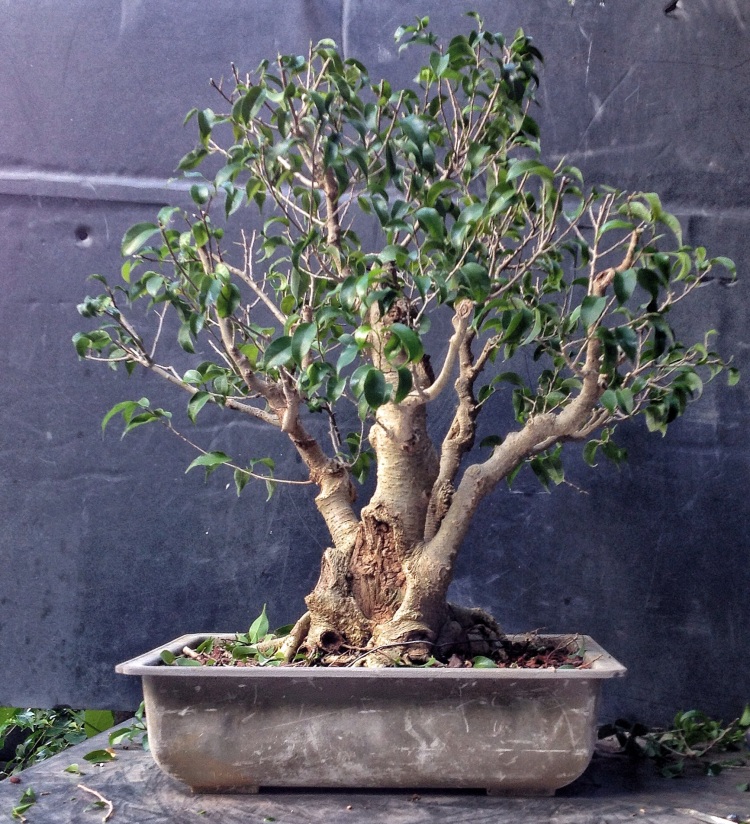 There was talk that the “too-little”, which is a dwarf variety of f. benjamina (the weeping fig) will revert back to the big leaves of its lineage.
On the left is an average leaf on a benjamina, on the right is the biggest leaf on the “too-little”. 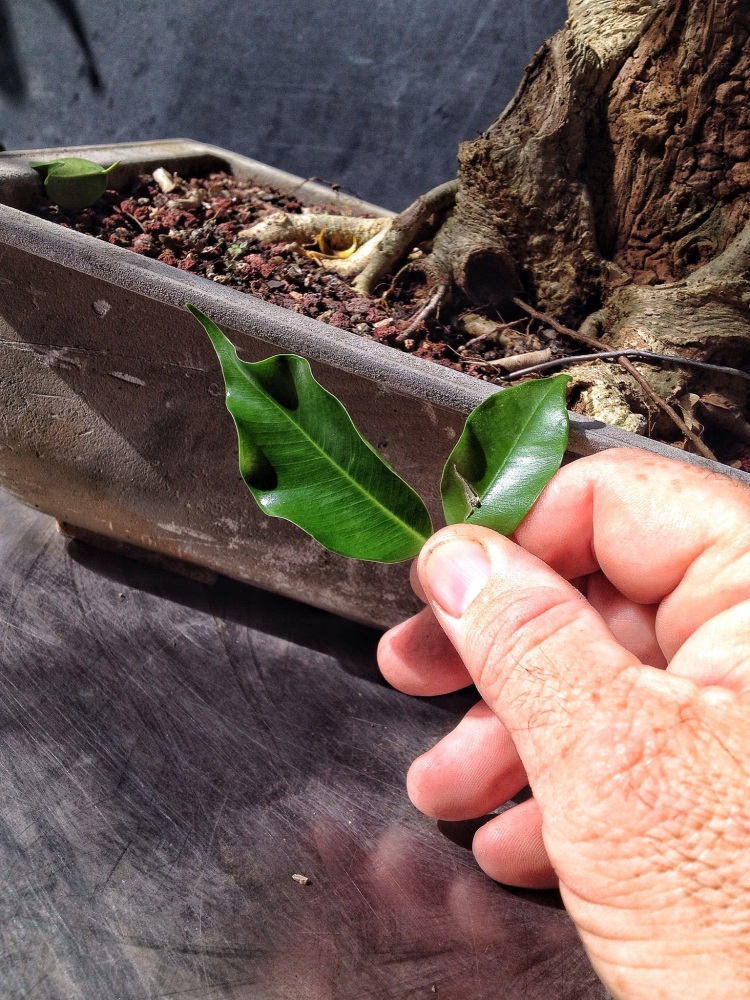 Most of the movement in the branching was accomplished using “clip n’ grow” techniques.

I will have to agree that trying to make the tree into the traditional pine tree shape just doesn’t work.
Live oak style, deciduous style, upright styles; that’s how to shape these trees.
Are you ready to see how I can shoehorn this…. 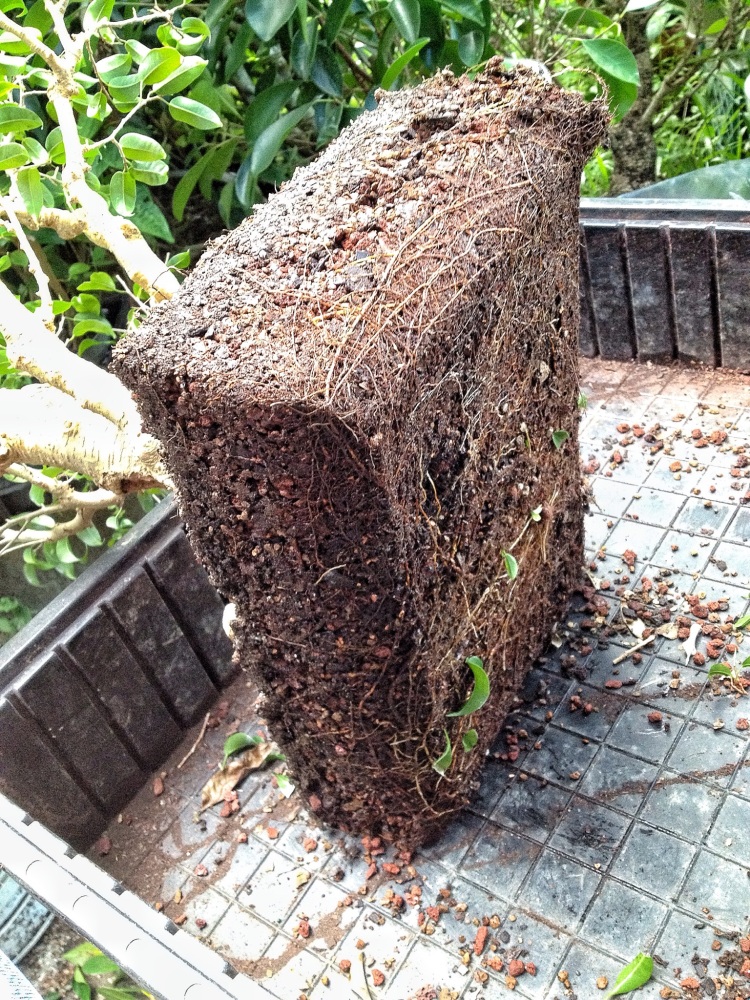 I comb out the roots and sit it into the pot.

I knew the roots would fit. I had put it into the deeper plastic pot from a shallow one (a little deeper) like this last year and I’d already cut back the roots then.
A secret about my trees, if they’re in bonsai soil, even if it’s in a deep nursery can, the big roots are almost always cut back so the tree can fit into a finish pot.
So, yeah, I tricked you.
But now, are you ready for the hardest decision?
Left or right? 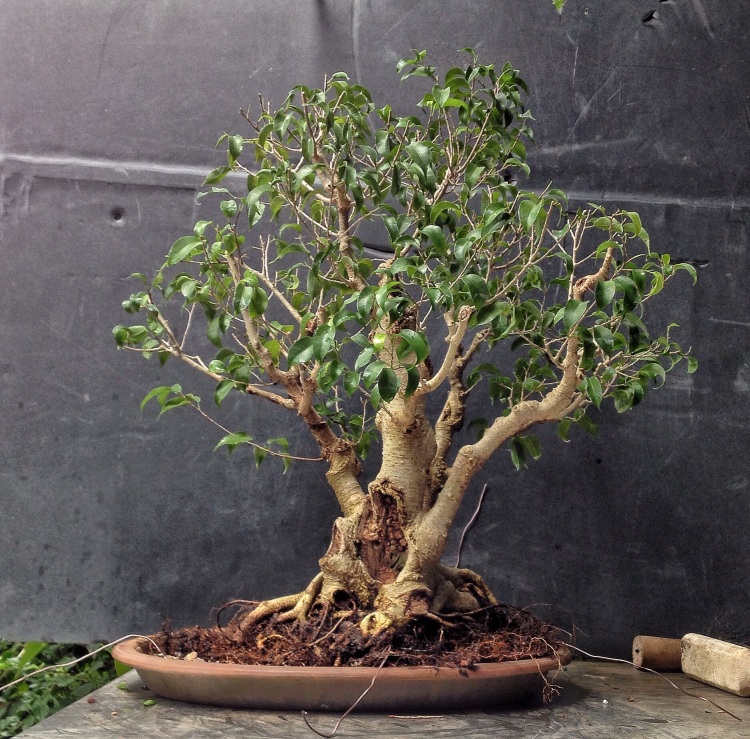 It’s a tough question.
It looks good on either side.
On the left, I would grow the tree almost like a shade tree over the patch of soil on the right. And it becomes a big tropical style tree to eat mangoes under.
But if it’s on the right, the focal point becomes the big scar and it becomes a tortured, haunted tree to run and hide from because it gives you and your chihuahua nightmares…
Hmmmnnn……
I need to contemplate.
Actually, I need and a snack and drink.
Crackerjacks. When was the last time you had those? 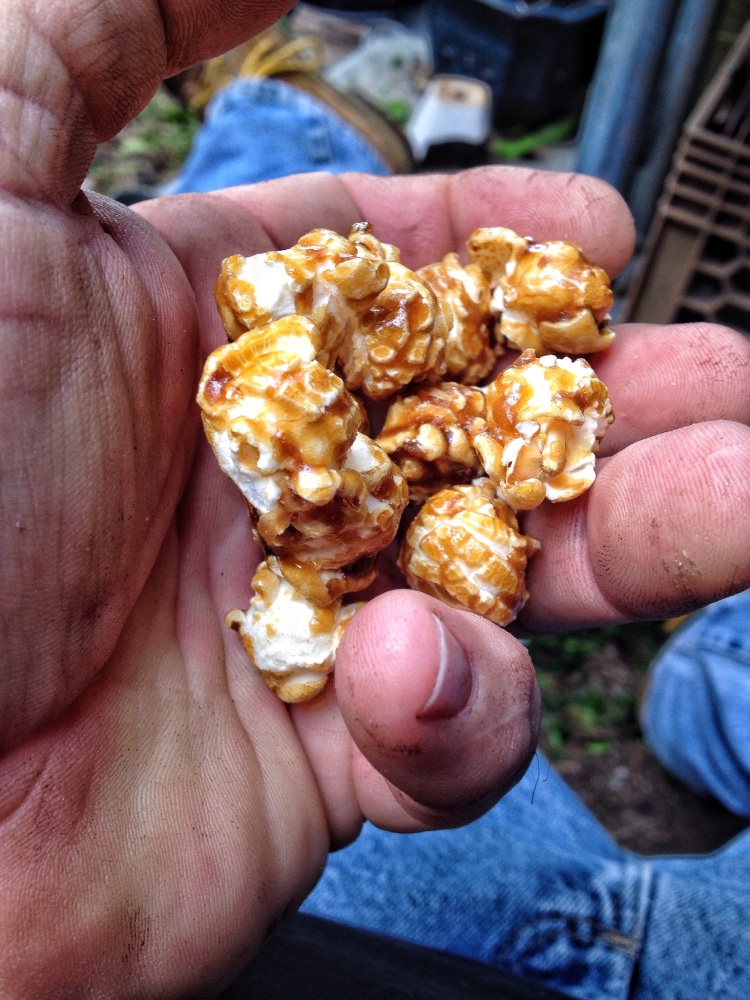 And a tall gin and tonic.

Gin and tonic, I recently learnt, is the drink of the true Bonsai Artist (or, dare I say, even Bonsai Professionals? I’ll get in trouble one day for that. Maybe even tomorrow).
As soon as I learn the secret handshake and I’m initiated into the Brotherhood I’m lobbying for absinthe. That’s a Real Artist’s drink.
Or Jaegermeister.
Boom!
Aha!
A peanut!

It seems to me that there were more peanuts in a box of Crackerjacks when I was a boy. I see maybe three in this whole batch.
Maybe it’s because I didn’t like them as a boy, so I thought there were too many, but as an adult, I look for them because they are tasty, and there aren’t enough.
I just don’t know.
So, what side of the pot did my, now, gin-soaked brain choose?
Why, the spooky choice of course! 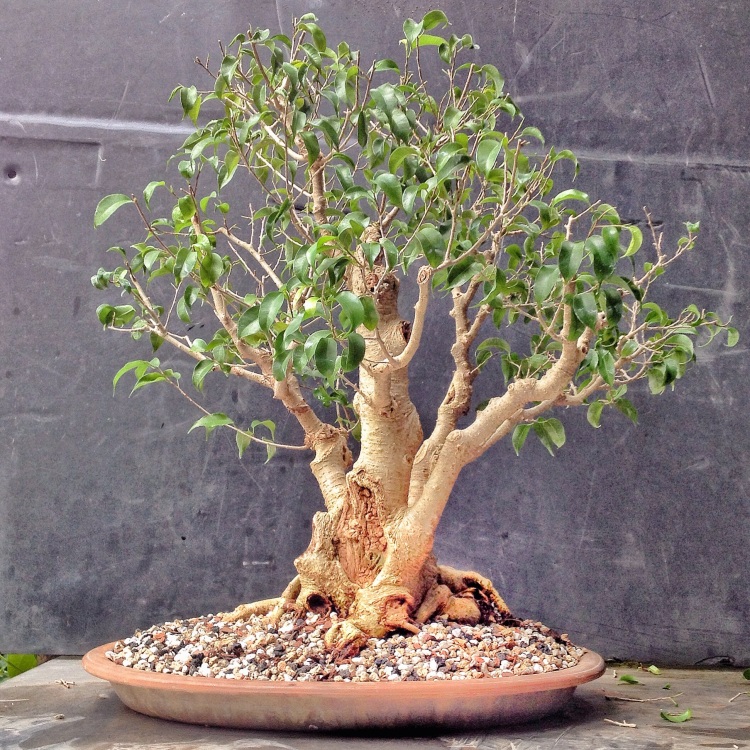 I will have to grow the left side out slightly longer but that’s easy, it’s a ficus.
I’m happy I didn’t sell it.
Since we are talking ficus benjamina “too-littles” here’s an update on the one I worked a few weeks ago (from this post).
Here is how you last saw it. 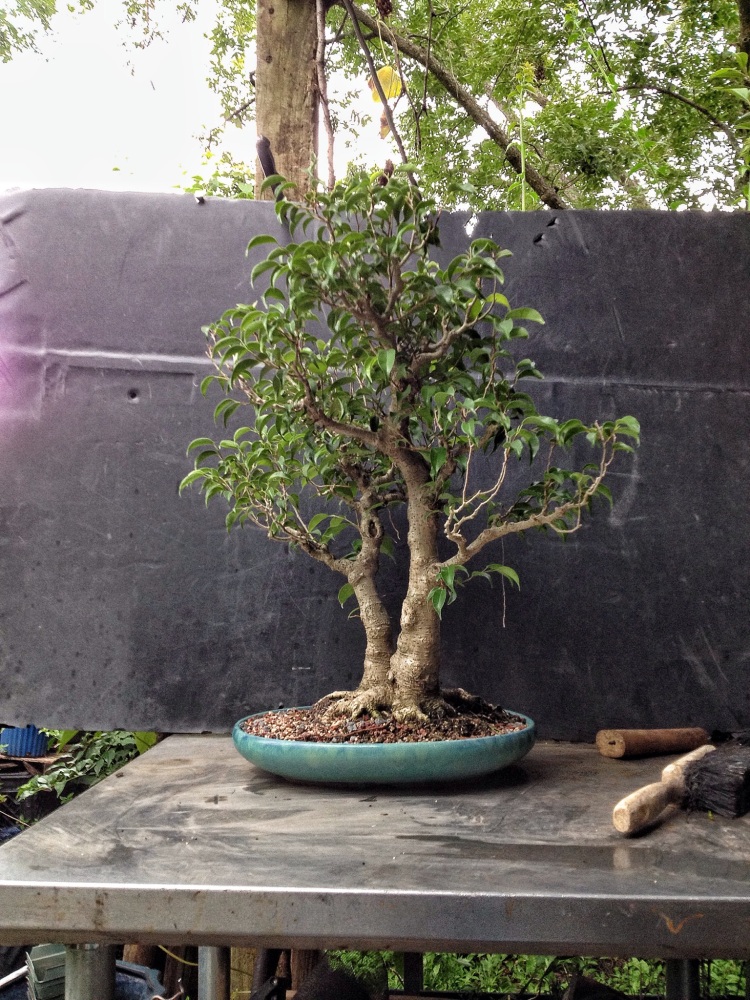 Looking good.
Maybe I should have brought this one to The Auction.
Nahhhh, it’s too pretty now too.