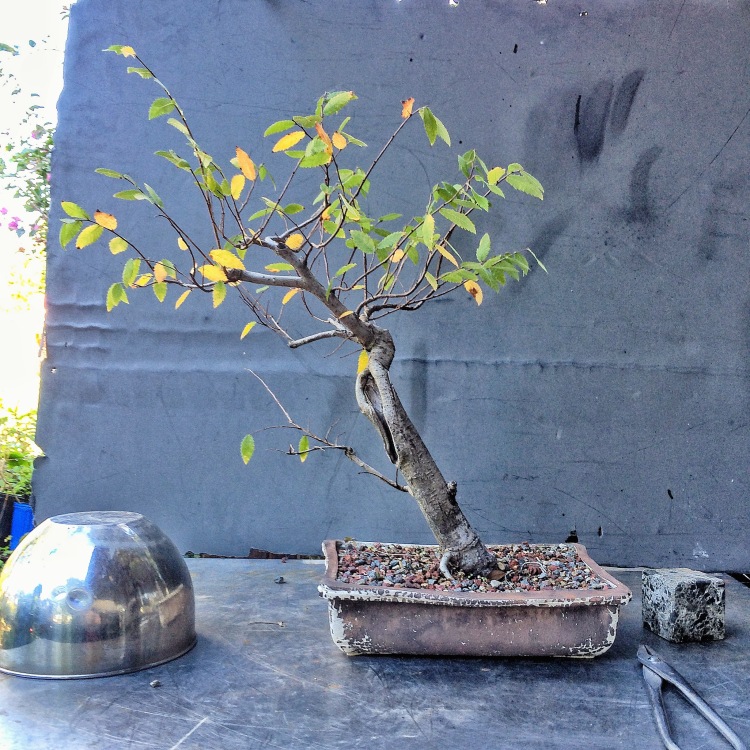 If you’re a follower of the blog you’ll remember that it made an appearance in this post here. That post was about patience, developmental steps, and beer.
This was but one of three trees I worked on in the post.
Here’s how it was left then. 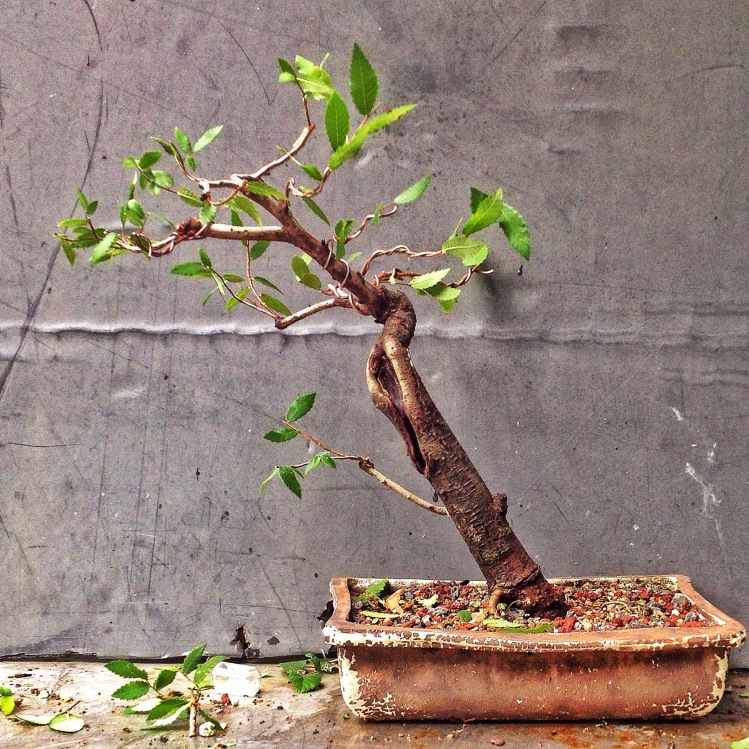 I said that the last post on this winged elm (ulmus alatta) was one where the development was the main focus. I let the elm grow all year and now I think I have some branches that are in the right places and I can do a final cut. And it’s time for a nice pot too. 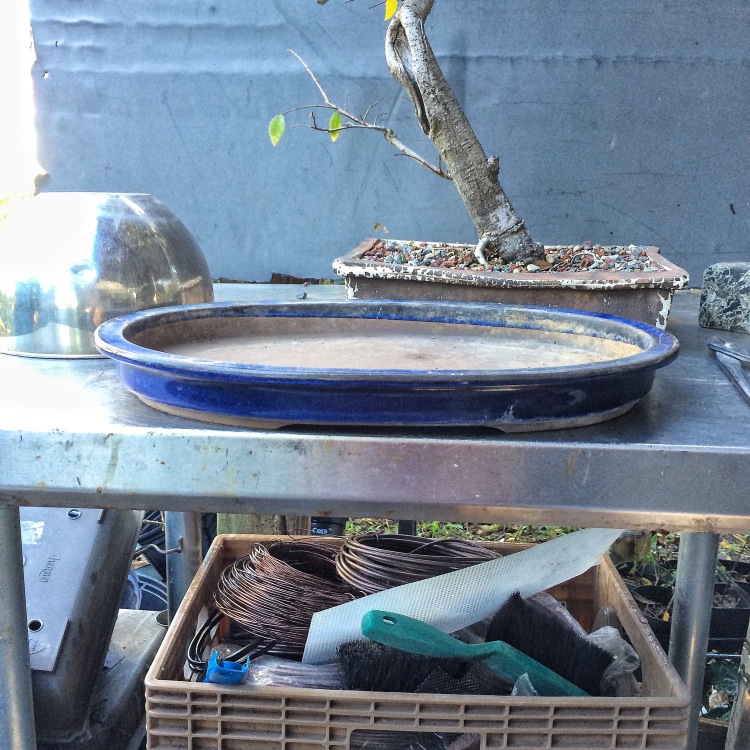 Look at all the branches I have to choose from. 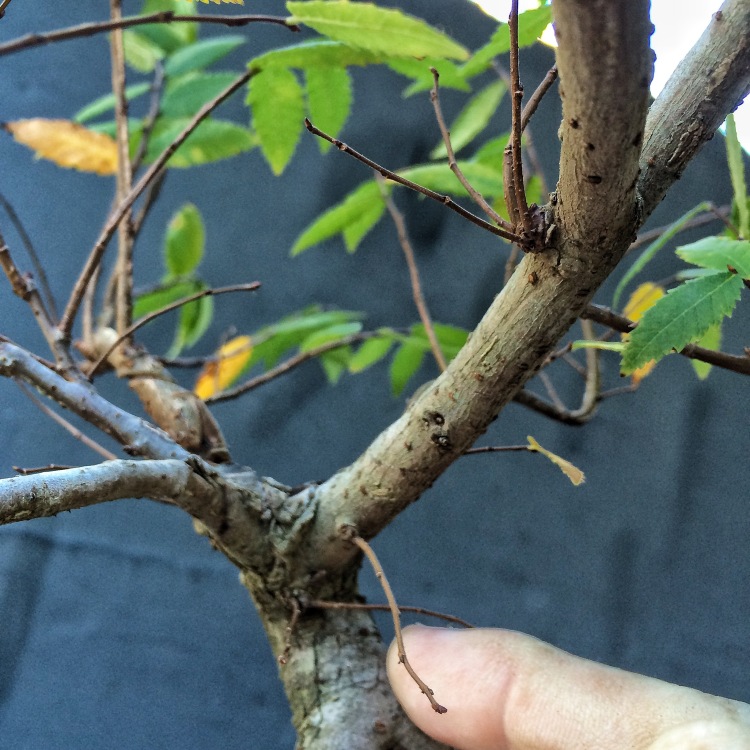 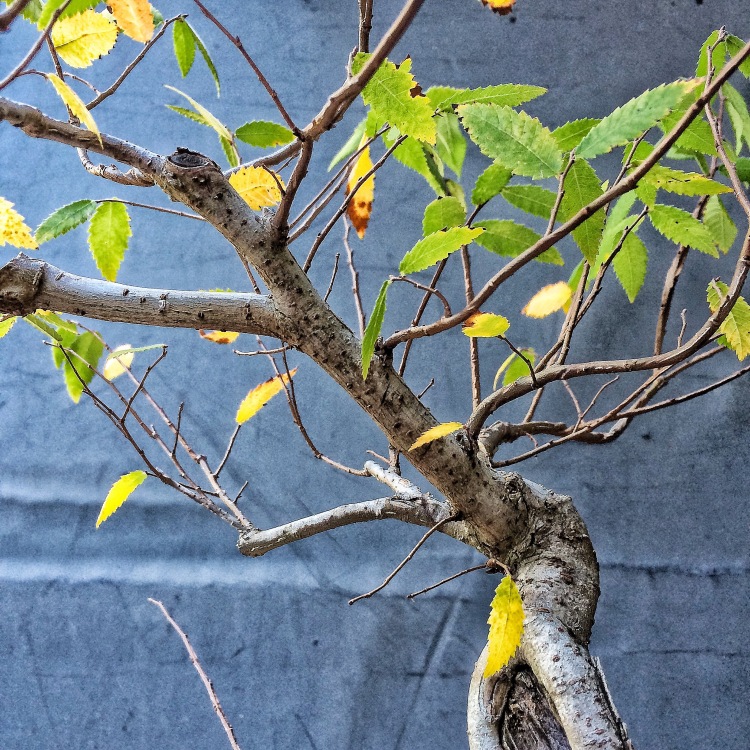 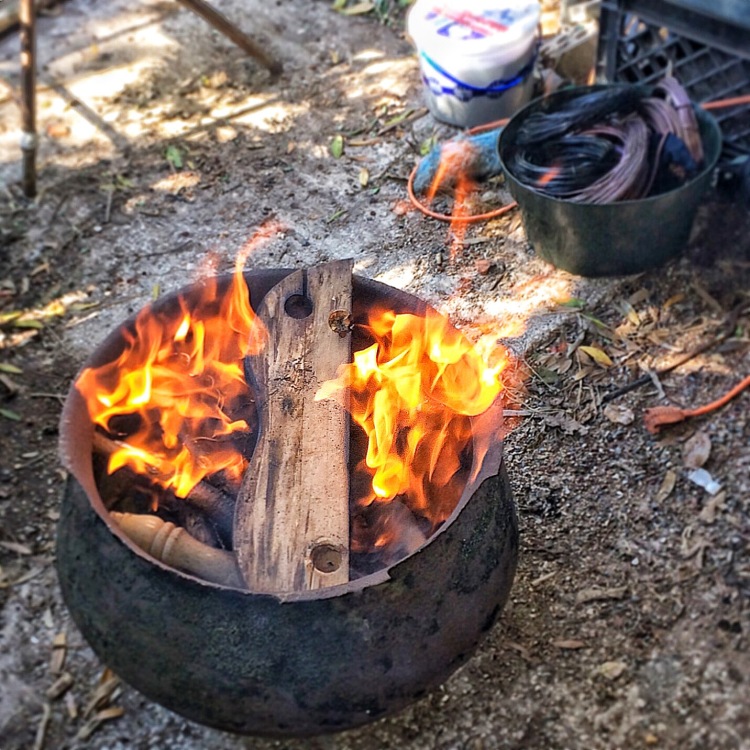 Ahhhhh, that’s good. I don’t have a chair to sit on anymore but I’m warm.
Okay, I’m going to go fast now, try to keep up.
I can cut back here for taper. 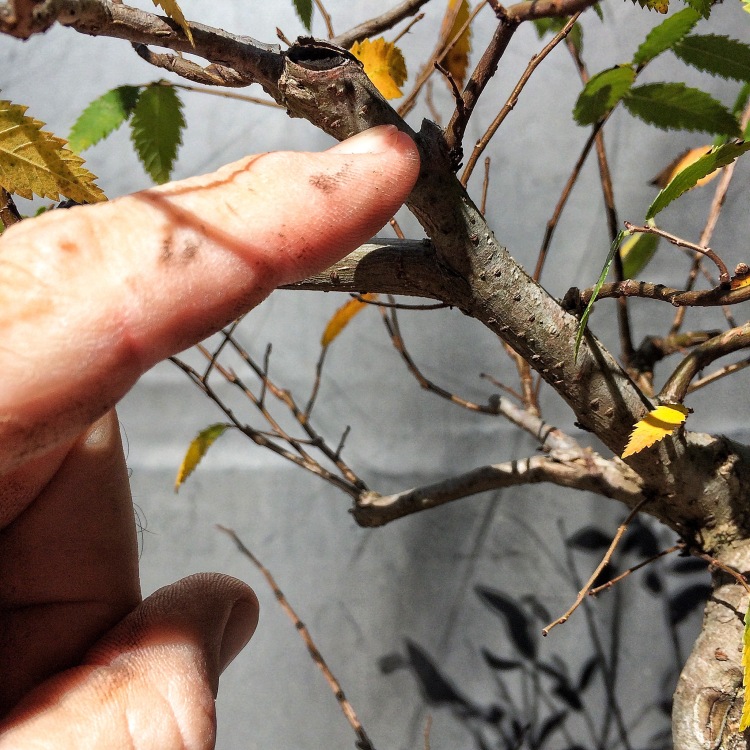 As well as here. 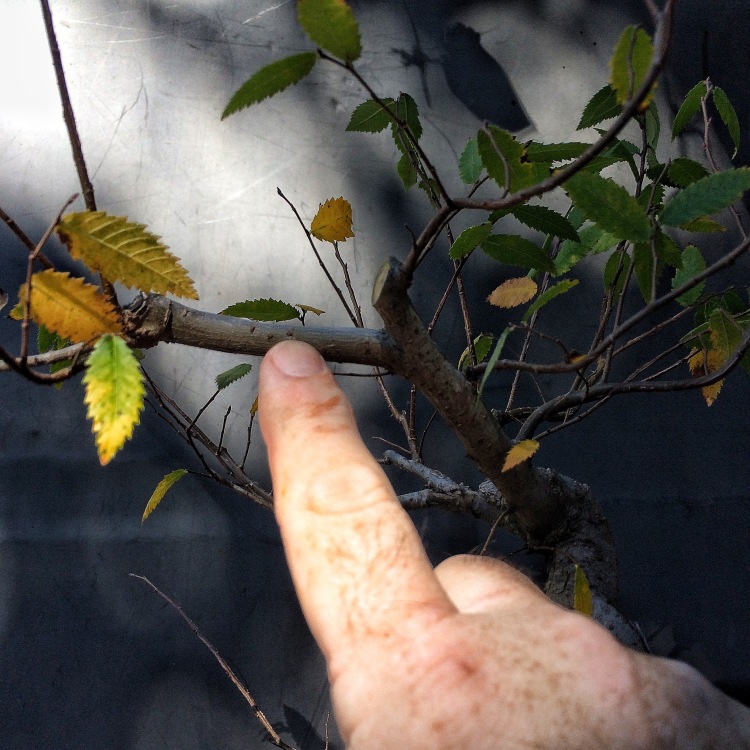 On the cut above, you will notice that I left a nub. The reason is horticultural: by leaving the nub, there’s a better chance of a new branch budding from around the base of that nub. The genetic information for new branching occurs at what is called the branch collar, or the base of the branch.
Like here. 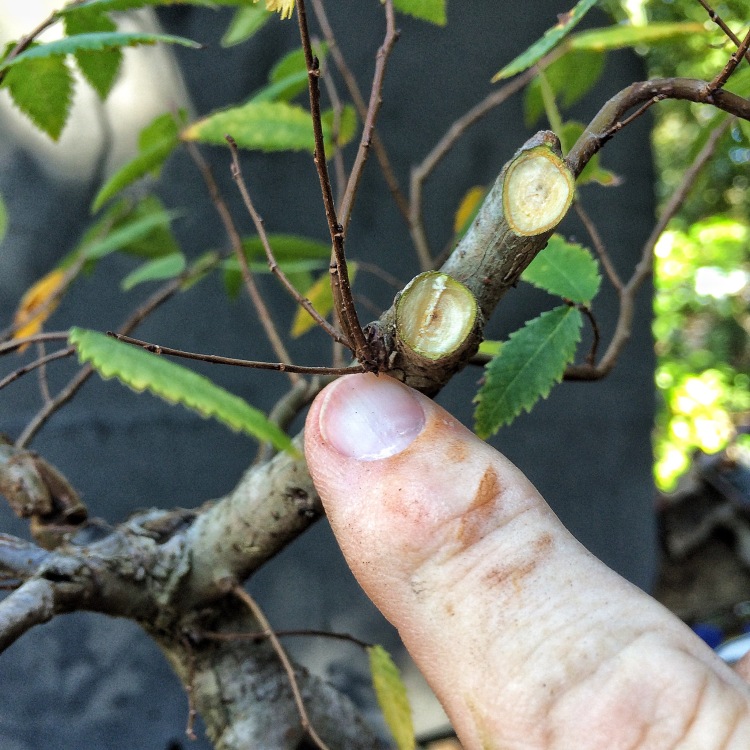 Here we are all trimmed. 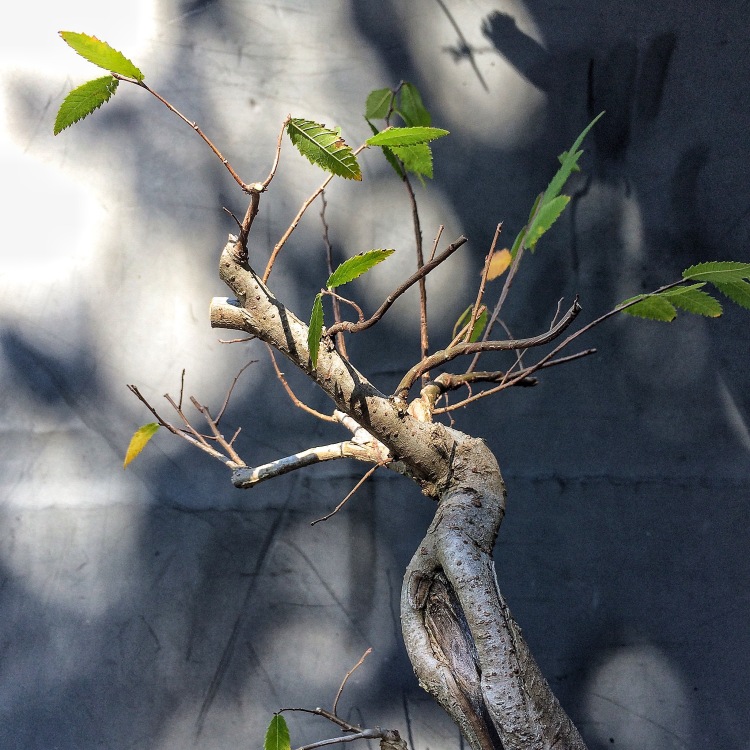 And now all wired. 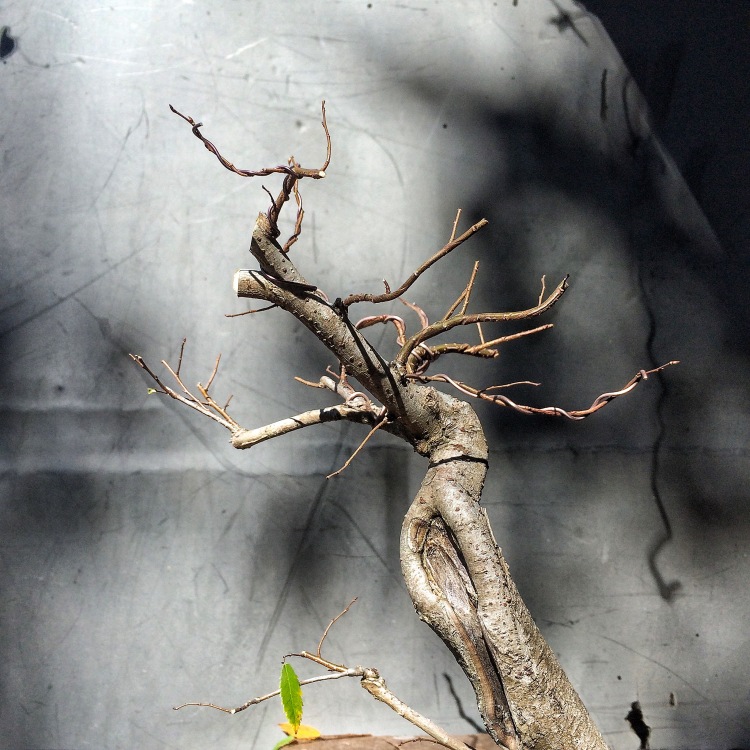 You all are wondering about this one lower branch, right? 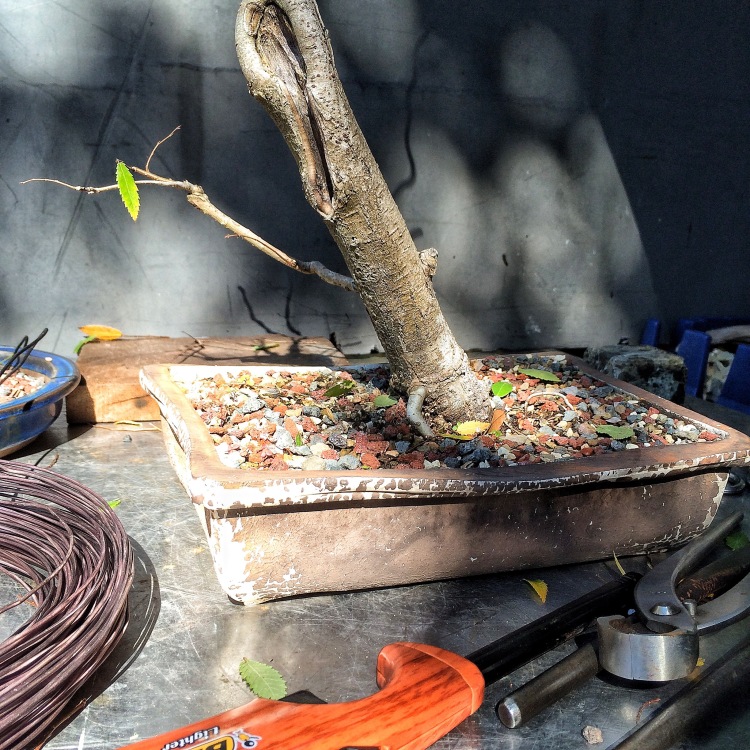 Actually, more than half of you (I’d hazard a guess) are wondering why the whole tree isn’t in the fire. 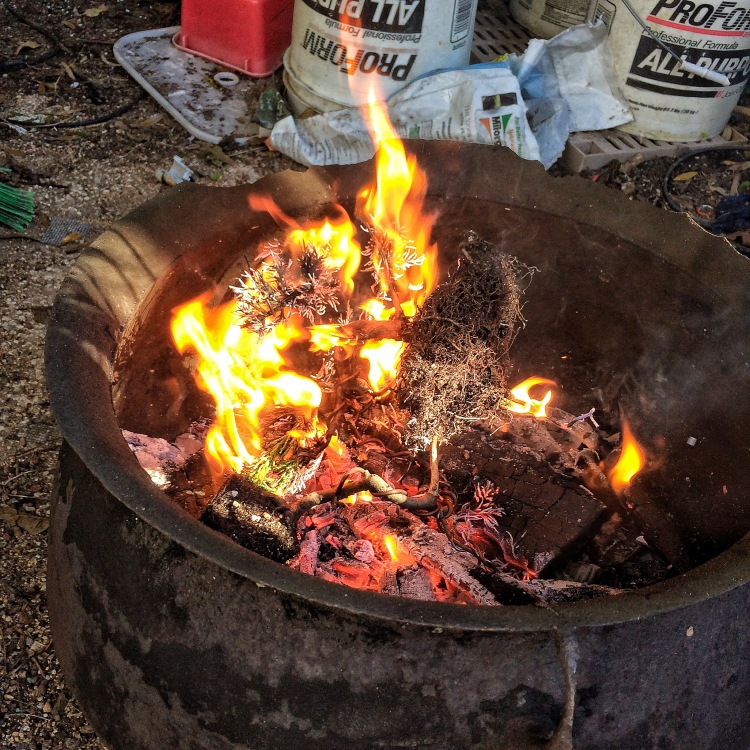 I’ll explain the story I see in this tree.
You see, the best trees have stories they tell. It’s art, after all.
Some trees story is simply “tree” or “tree in field”. And that’s not a bad thing.
And then some trees are pure design (think some of Kimura’s more wild sculptures) and don’t have a story. Those are the hardest trees to make work because there is no reference to nature for the viewers to relate to.
That’s called abstract art.
Artists like Dan Robinson and even Walter Paul are Naturalists.
Most Japanese stylists are Idealists or even Caricaturists.
I know I’m talking Art but bear with me, I do have a destination in view.
I have an eclectic approach to bonsai styling myself, I tend to let the tree tell me where it wants to go.
So what’s the story with this tree?
Consider this: it’s an elm, which usually grow like a broom (straight trunk and a full canopy, imagine, if you would, a giant like Paul Bunyan cutting the tree down and using it like a broom. Perhaps to clean up after
Babe, his Blue Ox). So now imagine that Babe, the Blue Ox, was wrestling with Paul (they liked to wrestle, that’s how the Grand Tetons were made, after all) and he gets thrown into the tree, breaking the main apex off in the scuffle (a broom style tree tends to have two apices, one more dominant than the other) and knocks the tree over.
Well, for some reason, Paul feels sorry for this tree and kinda pushes it back upright.
Kinda upright. He is a lumberjack, after all. Maybe it was too small to harvest. Or he thought it looked better leaning over like it is. We aren’t really sure why.
Now remember, Paul Bunyan was a big man. This full sized elm would be about the size of a large-sized bonsai to him. I might even be suggesting that maybe Paul was the first bonsai practitioner in America.
I mean, he created the Grand Canyon, The Mighty Mississippi and the Missouri rivers.
Niagara Falls? Yup, him.
I’d definitely say he could have done it.
He did work with trees and knew how and wasn’t afraid to trunk chop.
So maybe he was inventing a new style of tree, one that has been lost in the oral traditions where all the Tall Tales come from.
I’d call the style: Bunyan style.
Or maybe the Ruined Broom might be better.
Or maybe this tree was growing in an open field (hence the straight trunk) and was clipped by a tornado, ripping off the main apex and partially knocking it down. But since it was growing in an ideal spot, it recovered and started growing again.
Nah, Paul Bunyan and Babe the Blue Ox were roughhousing and knocked it over.
I like that story better.
Oh, why the little first branch?
Pure design, it fills the negative space breaks up the trunk line, and creates some interest and makes you ask “why”.
Roots! 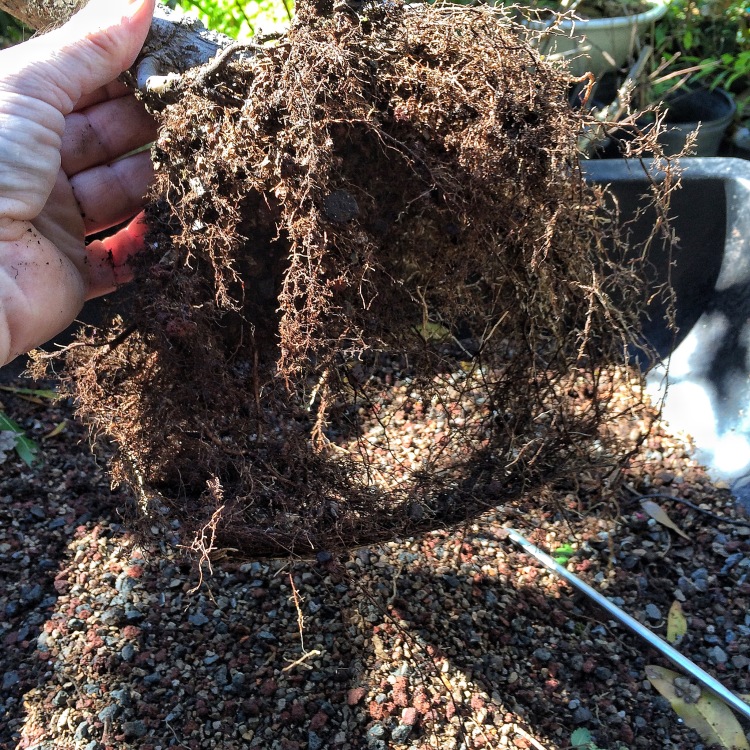 It has some good roots. This tree was an air layer originally.
And the finished tree. 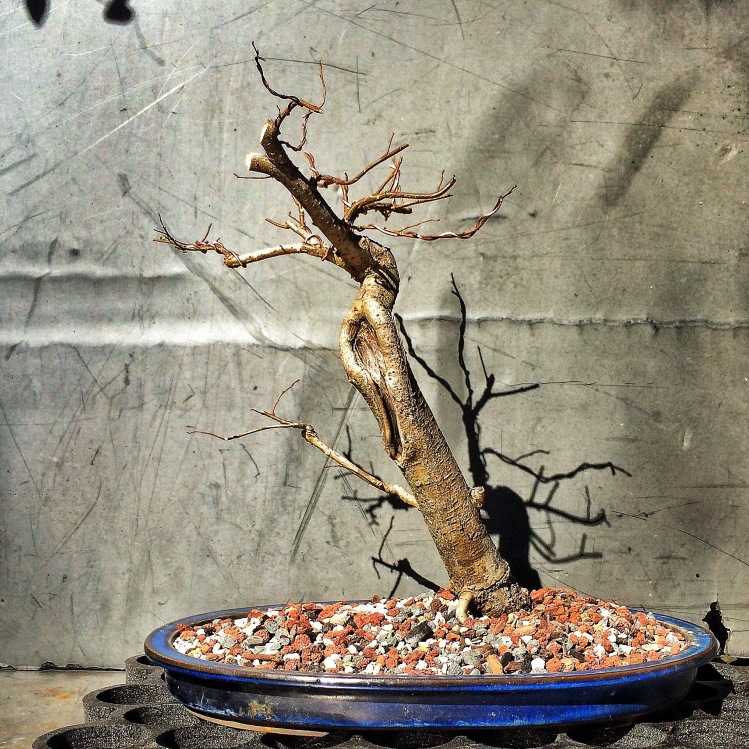 You may not like it (like I said, probably half hate it) but I do. It’s not a cookie cutter tree and it’s not a soothing tree either.
It looks beat up and damaged and it plays on the subconscious and makes you feel just a little bit uncomfortable.
It makes you wonder why I made it, it makes you feel.
It might even grow on you, if you take the time to study it a bit more.
Ok, the next post is on a trident maple that was originally field grown.
See ya soon.