I’m three beers in and it occurs to me that I should be documenting this.

Whoops, I need my black backdrop.

It’s amazing what a difference a backdrop makes in photographing a tree.
That will be the first lesson of the post.
Whenever you take a pic for Facebook, Instagram or even a forum, use a backdrop.
The three trees I’m working on are all elms.
I’ve already removed the wires and did a quick clean up and topiary prune on this one. 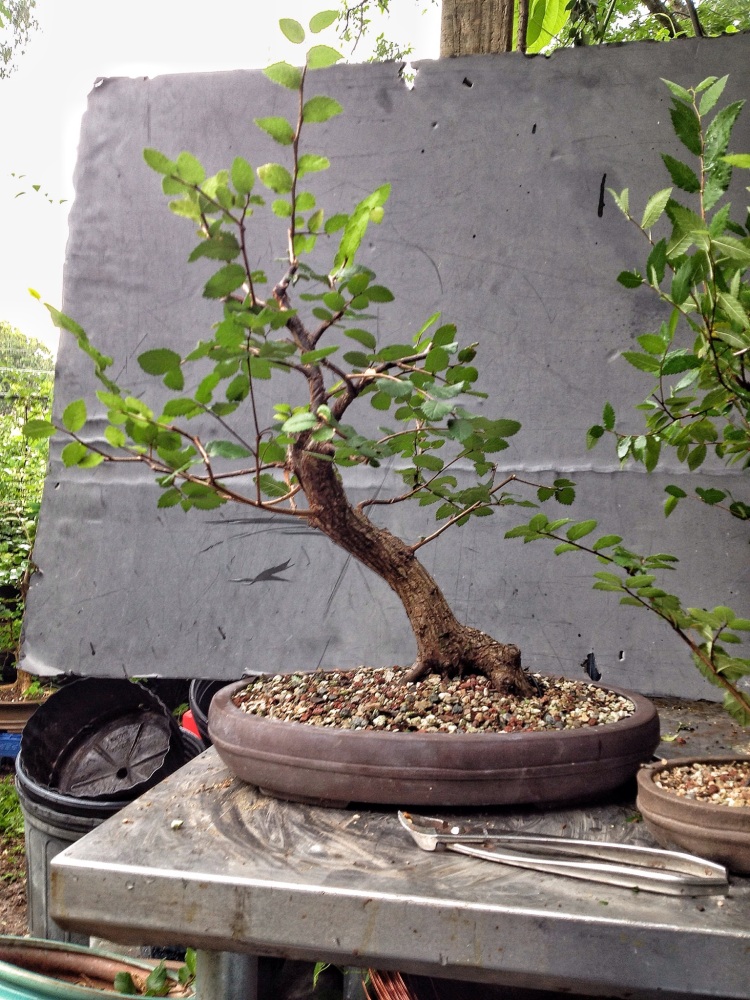 It’s a cedar elm (ulmus crassifolia) that I had gotten from Erik Wigert which he, in turn, had collected in Texas.
The next tree used to be a part of the first tree. 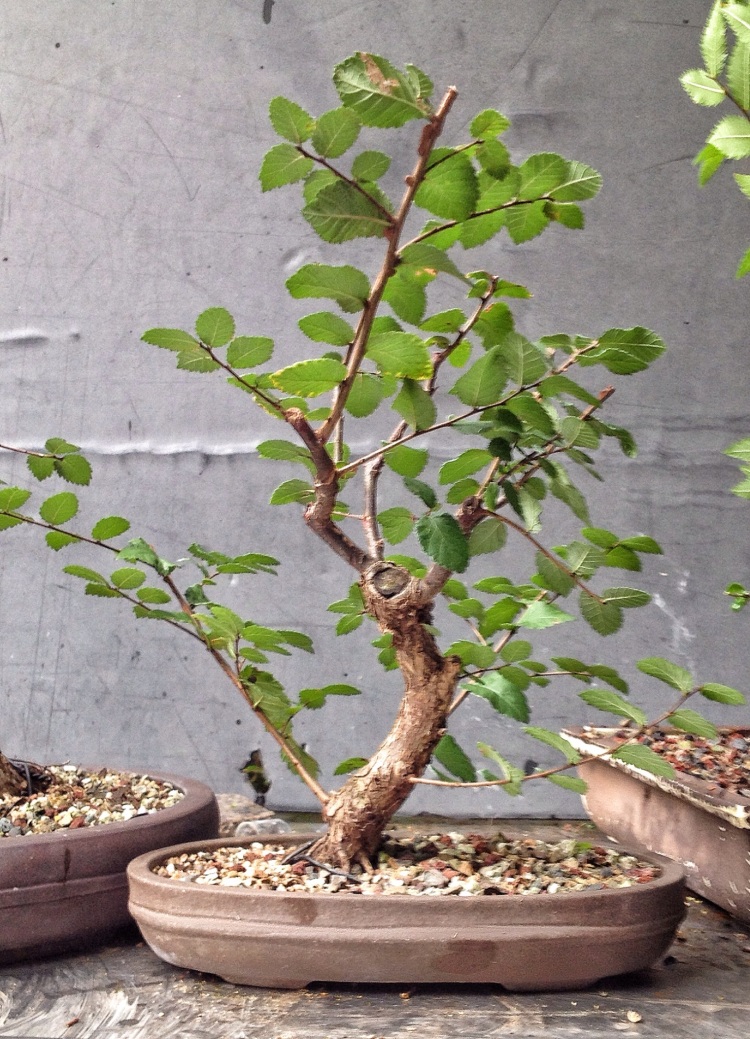 Therefore it’s also a cedar elm.
The dramatic and dangerous splitting of the two is chronicled in this post.
So far I’ve only removed the wire (about a week ago) and topiary trimmed it.
The last tree is ulmus alata, the winged elm.
Henceforth thou must pronounceth it either wing-edd or wanged.
House rules. 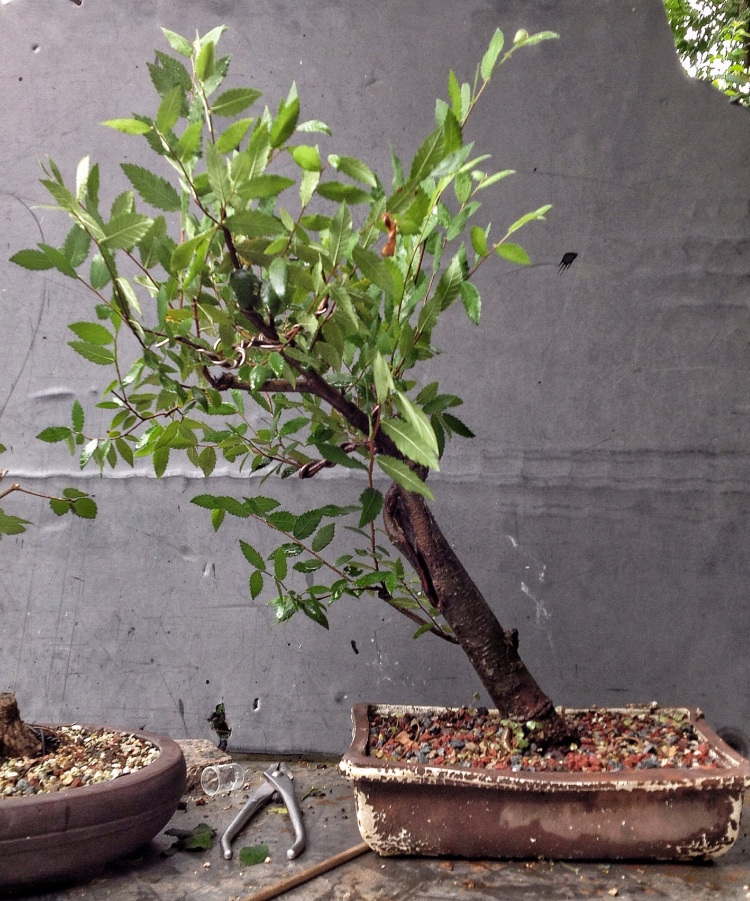 I hain’t done nuthin’ to it yet.
Though both the wing-edd elm and the cedar elm get wings on the branches (the wanged elm more so) the leaves are definitely different.
Cedar elm. 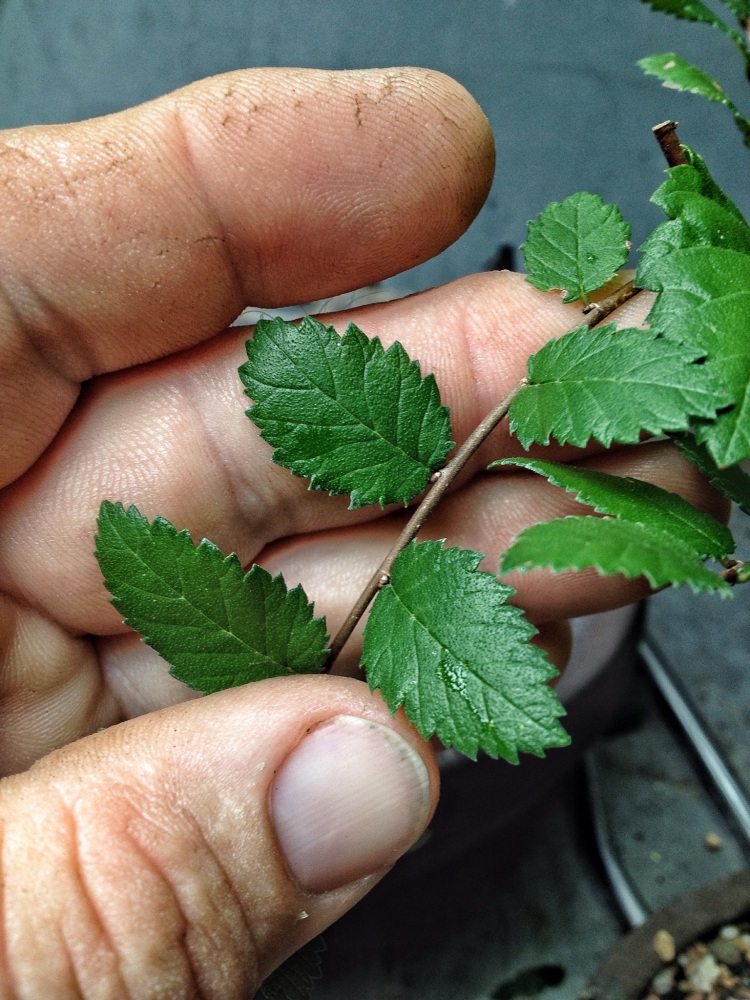 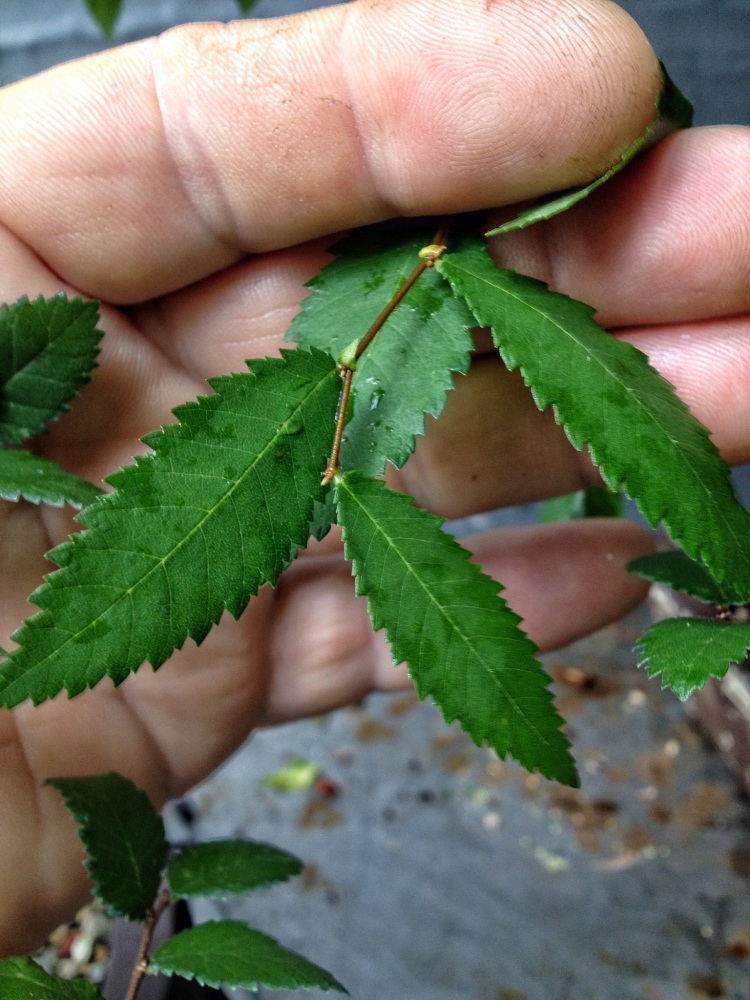 And, so we don’t have any Clark Kent/Superman questions of them never being seen together:

I think I shall begin with the wing-edd elm.
It has some big old wire that needs removing.

I’m going to have to break out the pliers with this wire, it’s even too strong for my big ol’ sausages. 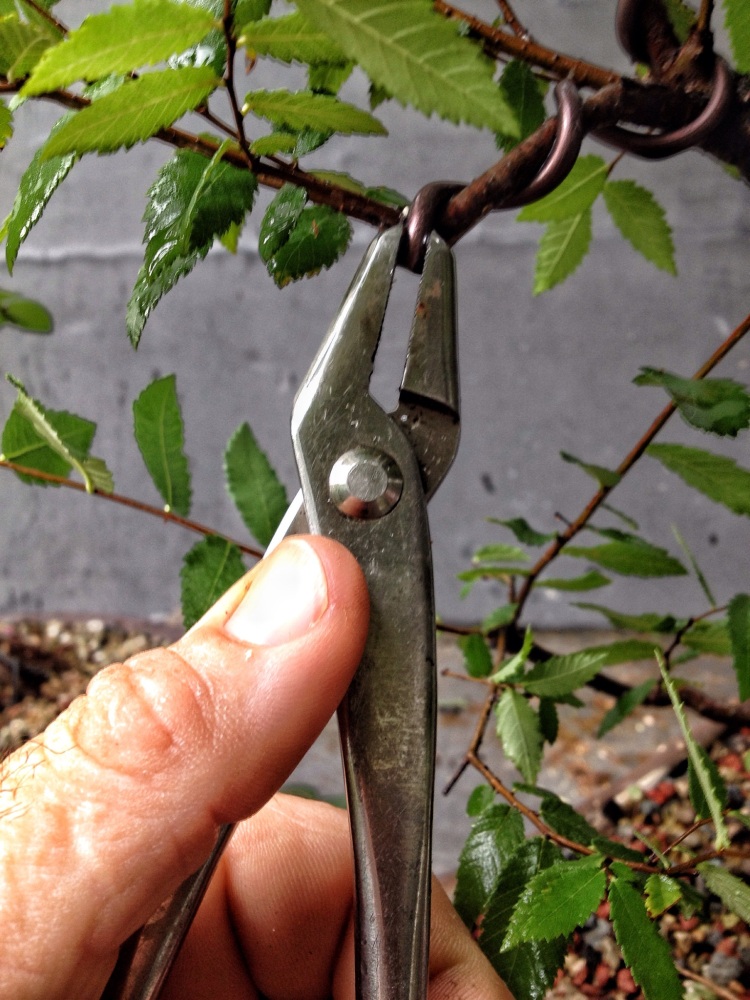 This is a good time to mention that, although they are usually called “Jin” pliers, these are actually made to assist in wiring (or unwiring, in this instance).
As far as the styling, I’m letting the tree tell me what it wants to do.
I could (if I wanted to) do what every bonsai artist (including me) will tell you to do: trunk chop and regrow.
That’s a totally valid piece of advice.
And…. if I didn’t already have a hundred of them I might consider doing it.
There is no art in doing the same thing over and over again because that’s what you were taught when you were a novice copying your teacher.
That’s something you do learning your art, not practicing it.
Now, there are still those bonsai enthusiasts who will look at this tree and say,
“You should chop it here…..”
I’ll just smile, and nod, and steer them towards the more conventional bonsai.
So what, in the name of all that’s bonsai, am I doing with this wanged elm?
I’m mostly letting it grow with minor adjustments through pruning and wiring and gentle guiding as I try to make it look more like a tree.
Like this. 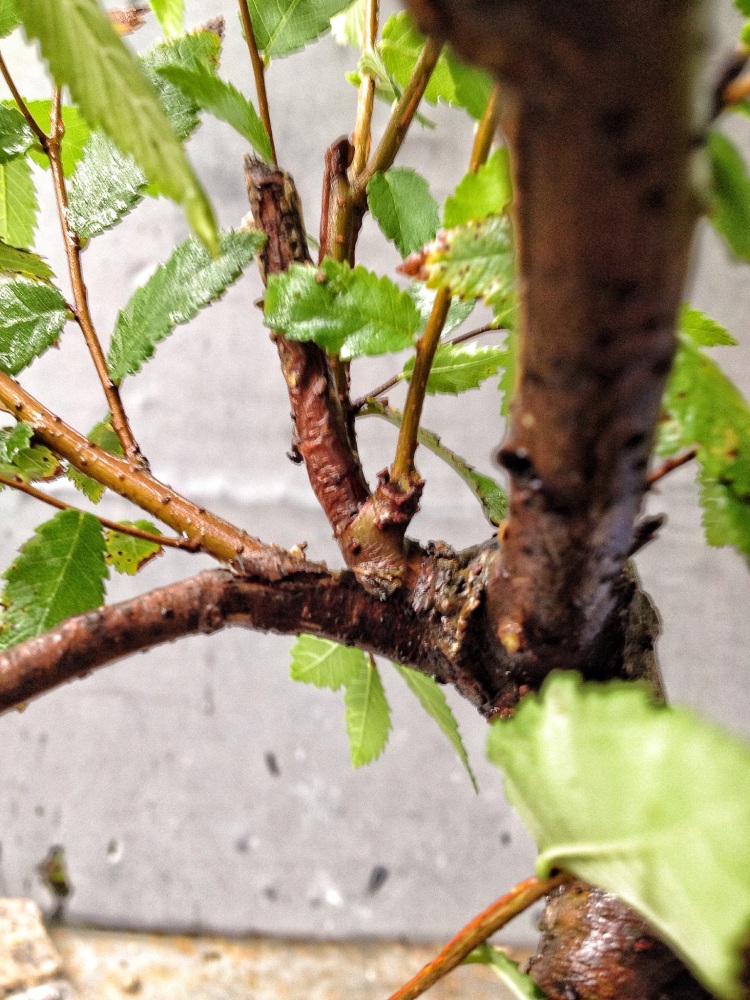 This branch was previously pruned and wired. 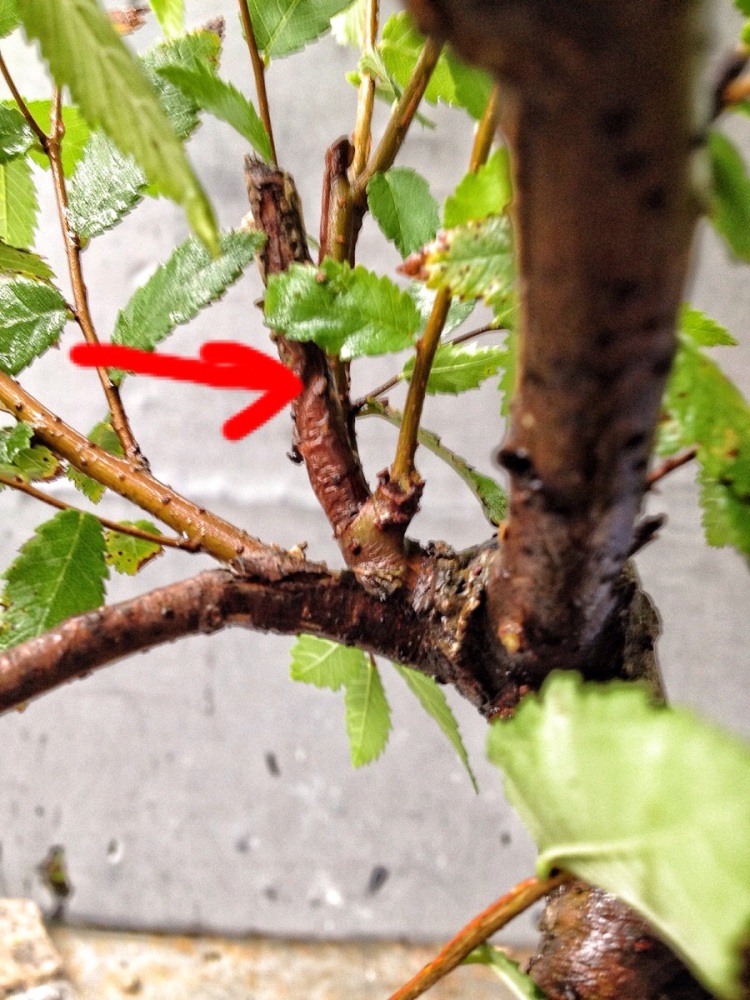 But then it put out better placed branches, so I don’t need it anymore.
Bye bye.

I need to shorten it somewhere around here.

Before I do that though, I need to think on it a bit more.
I’m needing some rumination and inspiration.
Let’s go to the short, baby tree and see what trouble I can get in with it. 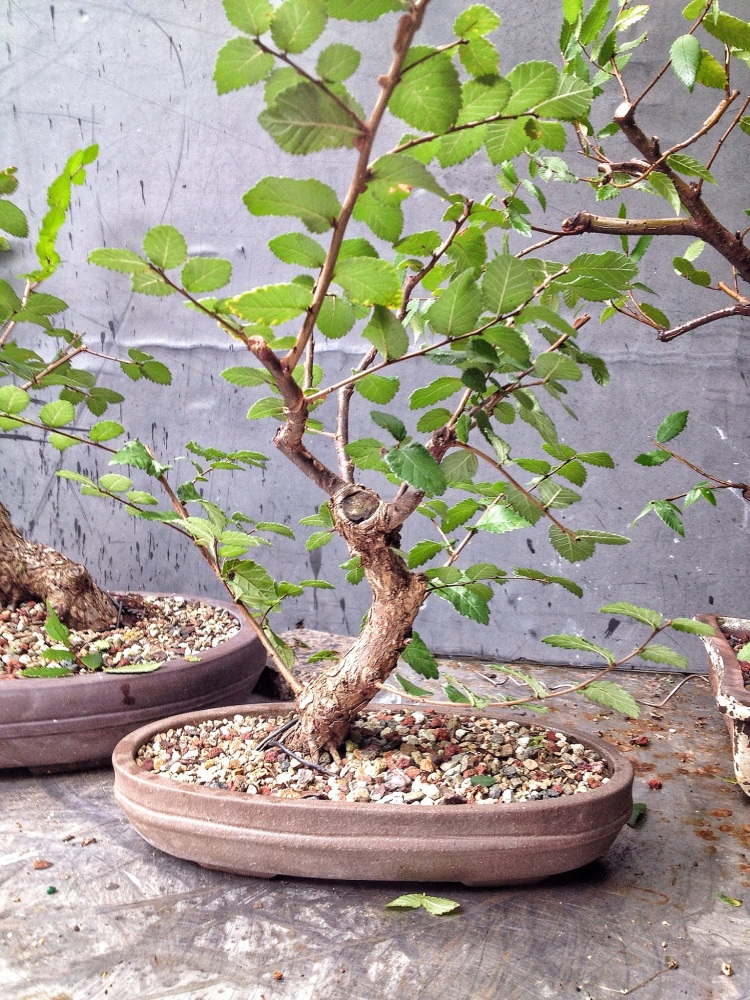 Talking about letting a tree grow, this one didn’t put out too many useful branches.
After a quick trim.

It’s not too much changed from the original styling.
Sometimes you just have to wait.
There’s an old cowboy expression about drinking a horses water at the watering hole that might be appropriate here….or is it “leading a drinker to a horse and him falling off drunk”?
It might have something to do about riding an ass too hard….I can’t seem to remember.
Anyway, you can prune, wire, coax and pray that a tree does what you want but sometimes it just won’t cooperate.
I have one more growth season this year, we shall see what happens.
Any ideas on the wing-ed elm yet?
Nope.
Let’s turn to the daddy cedar elm. 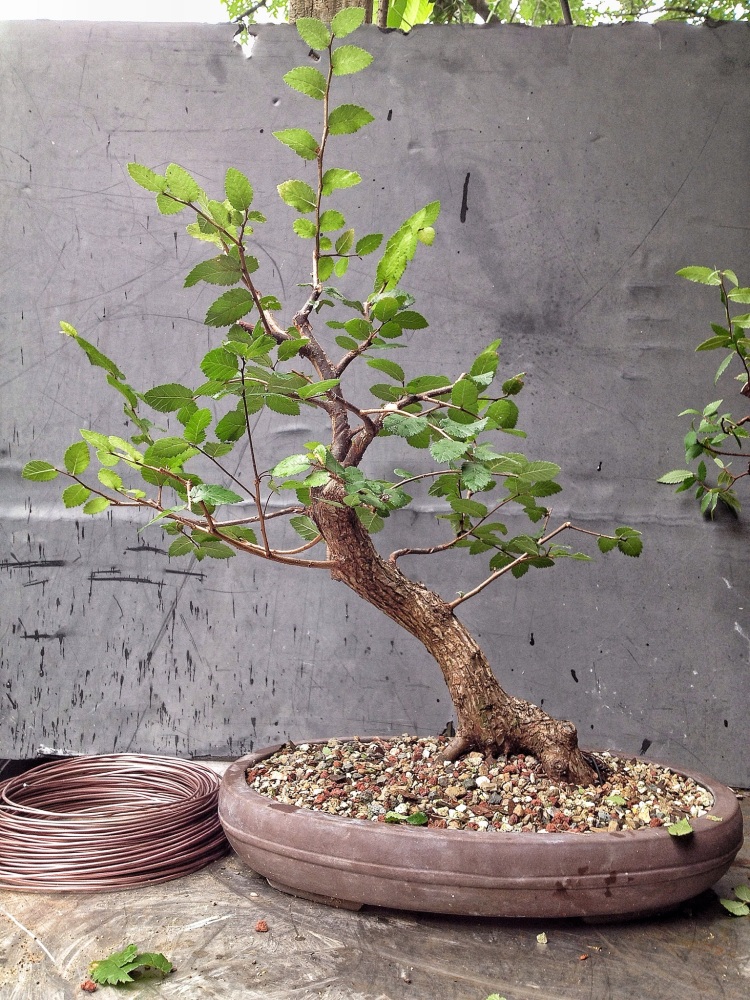 I need to figure out where to cut it back as well.
Here? 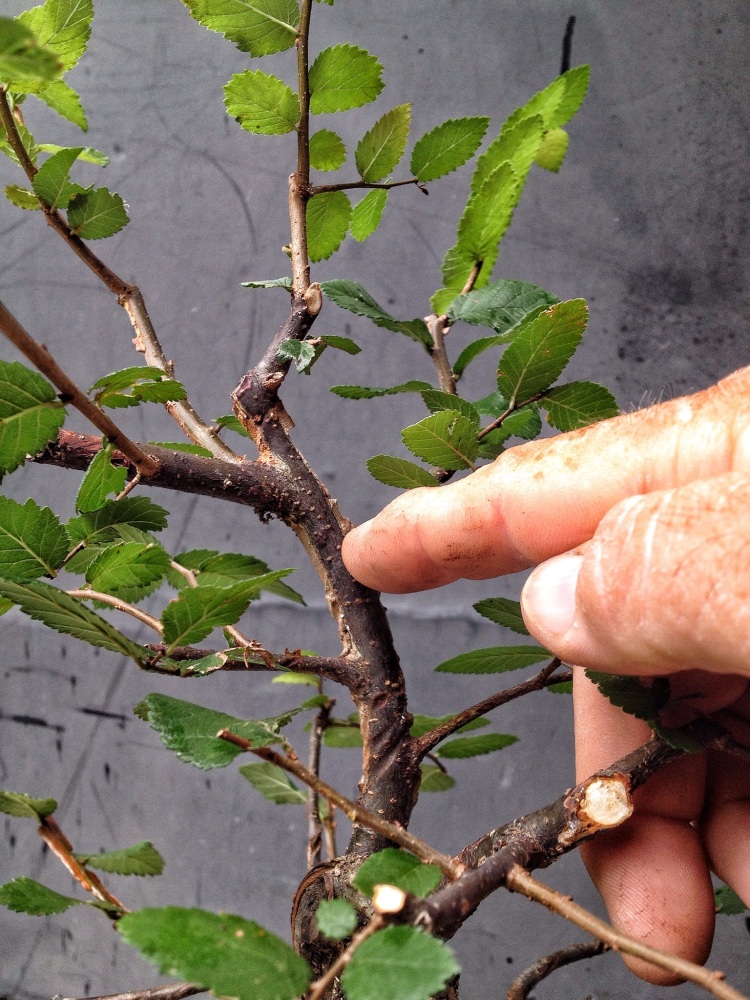 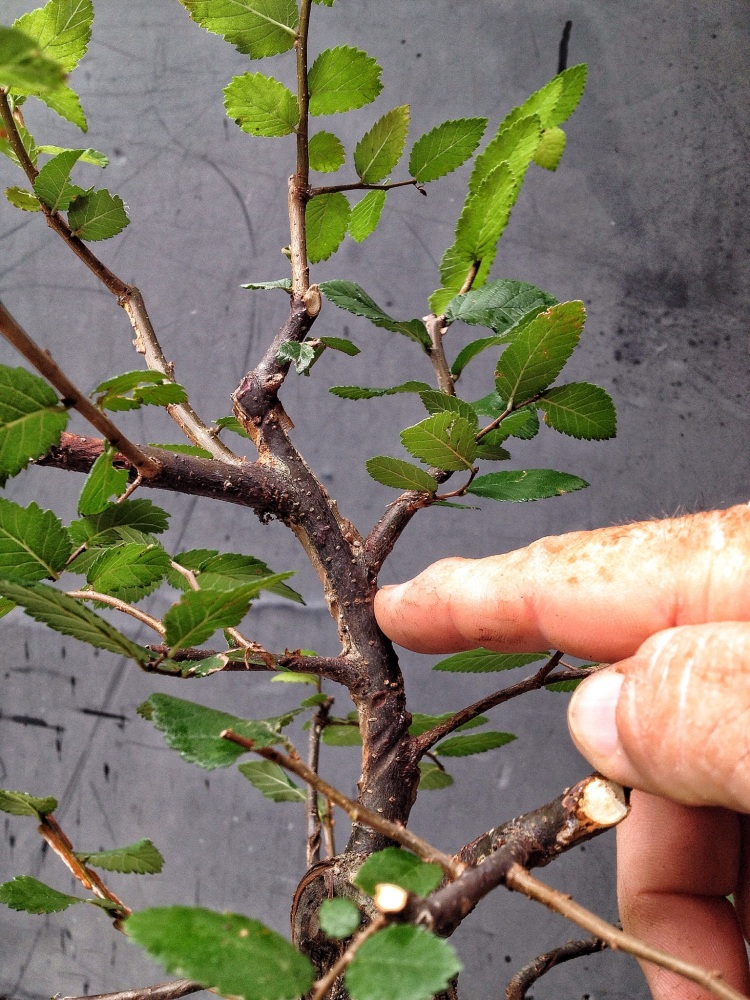 My general rule in styling a tree is to leave enough on it to have a pleasing looking tree sitting on the bench (well…….that is unless I chop it back totally, as I am known for in the social circles I frequent) and as the tree develops I cut off what is not needed anymore.
And that’s why I just chopped about four inches off the top. 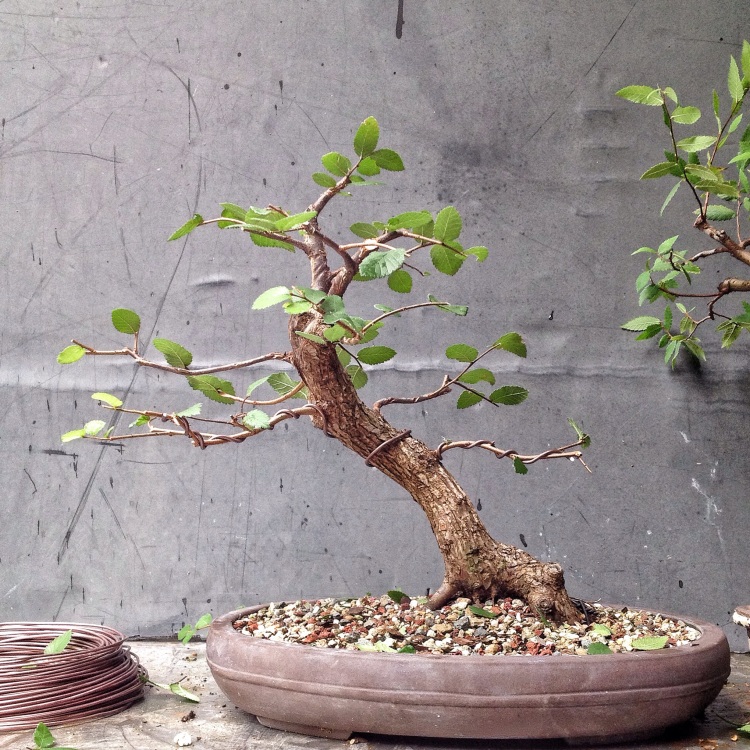 I wired a few branches but I am also using some of them fancy clip and grow methods with the tree.

When you combine the angular movement of clip and grow with the rounded curves of wiring you get a more natural and random look to your work.

As an example, this next pic is from the Treaty Oak in Jacksonville showing both of the characteristics on an old tree.

This is a quirk of old trees I first learned from Dan Robinson and was reiterated by his student, Frank Heidt:
Old trees have gnarly branches.
I think I’ve procrastinated long enough on the wanged elm.
I’m ready.

Where will I cut it?
What will I do?
Do I need another beer? 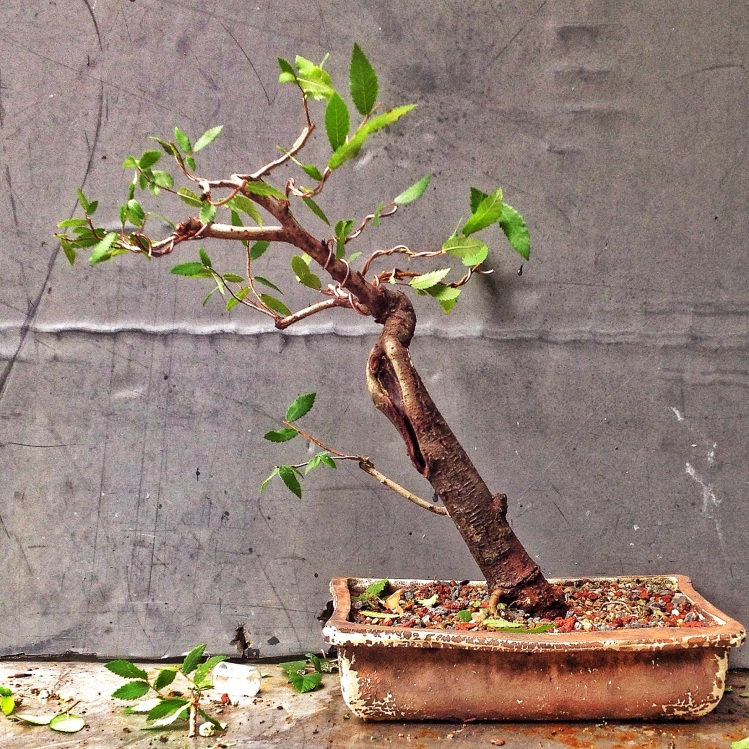 And that’s all.
I wish I had some massively transformative changes to show you, I really do, because it makes me look cool.
And cool is where it’s at, cat.
But as I work on my trees day in and day out I’ve realized that the biggest lesson been wanting to teach (today specifically, with today’s trees) is that developing bonsai is usually a slow process.
Those super-duper, magical and, dare I say it, miraculous stylings you see in demonstrations or vanity blogs are usually the end result of years and years of judicious, premeditated and purposeful work on the trees.
So I wanted to show you some down and dirty, in the trenches work with some developing trees and give you the “in between” look of an immature bonsai.
Especially that wing-edd elm.
It needs, as we say in the studio, some more time.
As for the other two trees, I’m a little disappointed with the smaller (baby) cedar elm but I think I’ll have some growth this time.
And I’ve gained a lot with bigger cedar elm.
It’s two more seasons away from being decent looking tree.
Any questions?