It needs trimming, wiring and repotting.
Portulacaria afra, Latin meaning “leaves like a portulaca” (which is known as purslane and moss rose) and “african” (it’s native to Africa).
The portulacaria afra is called “dwarf jade” by many but it’s not related to the regular jade plant (crassulla species) except for superficially, both plants being succulents.
But the “dwarf” jade actually grows taller than the regular jade, and will develop a woody center in bigger specimens.
I wrote a pretty well researched post last year (click here) that was also reprinted in the Potomac Bonsai Association’s Winter 2014 newsletter (That’s right brother, reprinted!) that has everything you ever wanted to know about portulacaria and probably some stuff you don’t.
Let’s look at todays tree again.

I need to remove some wire.

I need to remove a few branches.

The most work needs to be done on the roots.
It’s somewhat root bound.

Which isn’t too much of a problem usually, except it stays too wet. 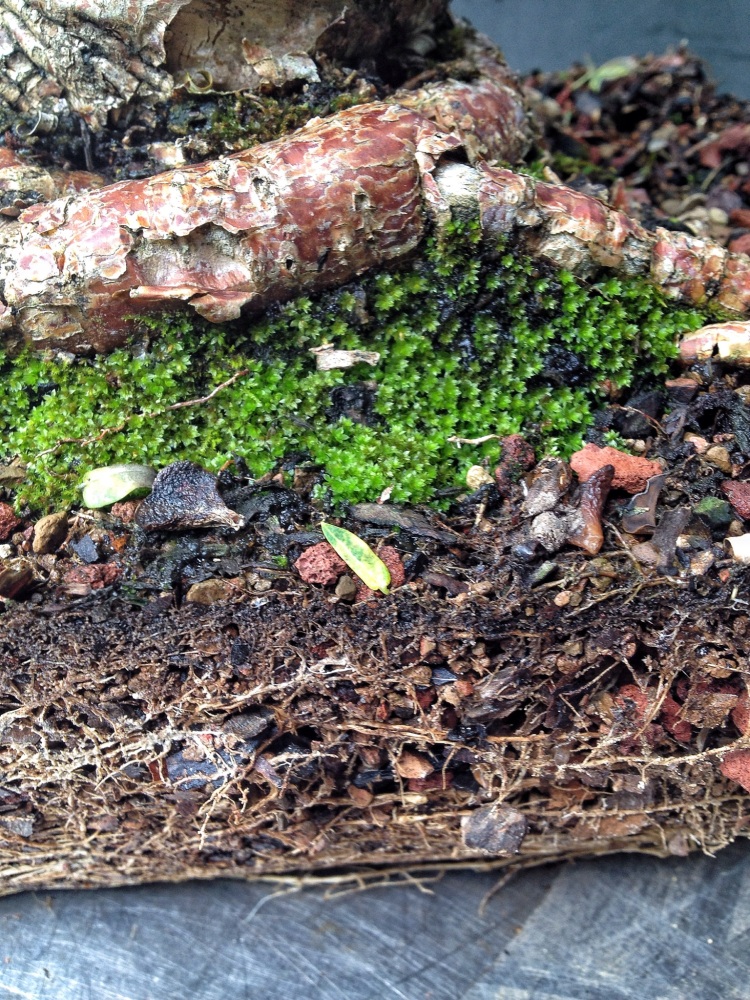 Moss!
You may think that a too-wet condition would cause the tree to rot, it being a succulent and all, but a well established root system in bonsai soil can handle the daily, afternoon, Florida thunderstorms.
What it’s been doing is slowing growth and arresting the development.
And I also need to clean up the surface roots; they’re bugging me. 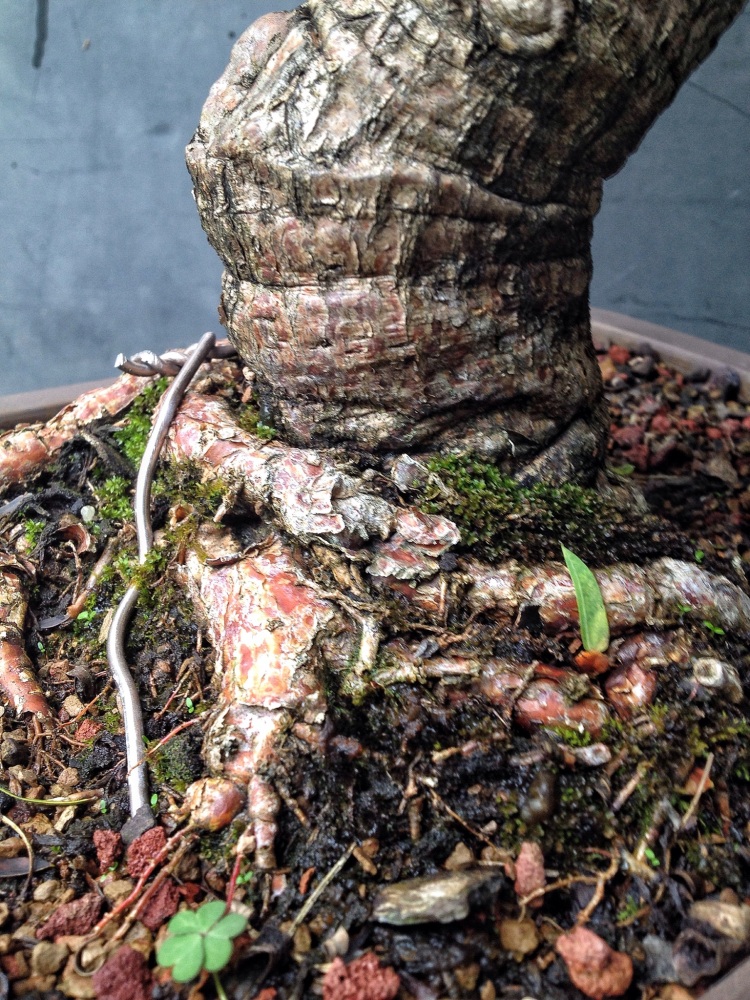 This is a tree where, against character, I am extremely conservative concerning the roots. It will be the third repotting and each time I’ve worked the roots a little to improve them.
The problem is that it will rot if I don’t allow the wounds I make to dry out before I start watering again.
But more on that later.
I’m going to start at the top on this tree.
The jade has a tendency to put out odd branches growing straight up and in the weirdest places, like under the shade of the canopy.

The dwarf jade has a way of keeping branches that are not ideal.
This one-

-has been lingering on for about two years.
Not really growing much but it’s still there with leaves on it.
The weirdest branches are the totally alive but completely leafless nubs.

There were probably about 5 or 6 them.
And look at this: 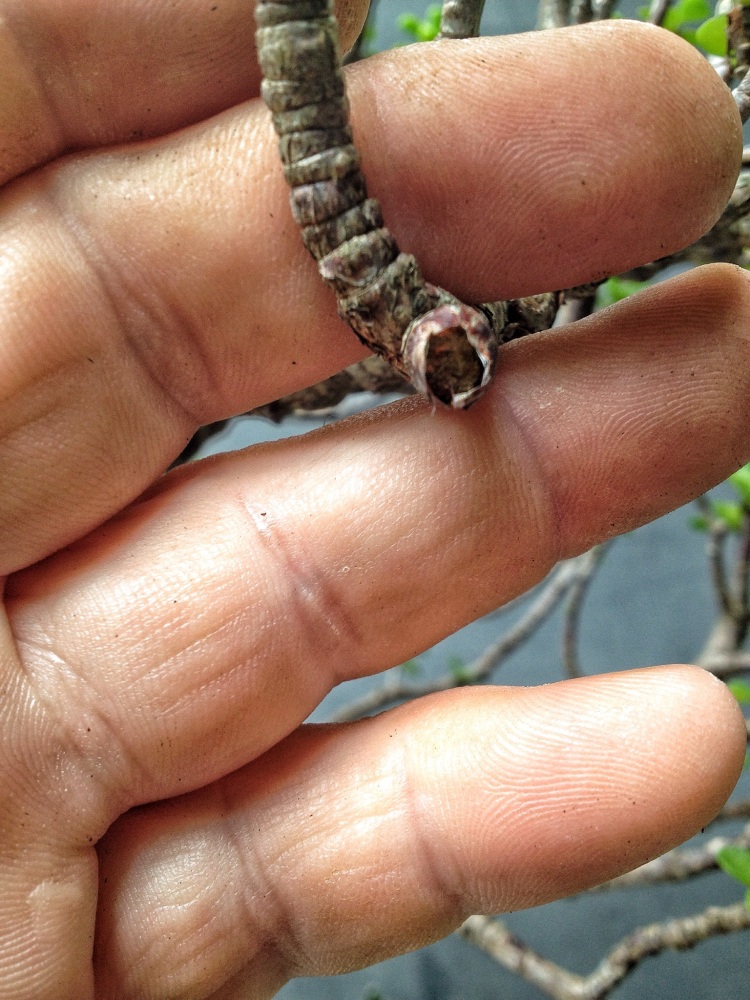 Can you see it?
Creepy….let me zoom in on it for you. 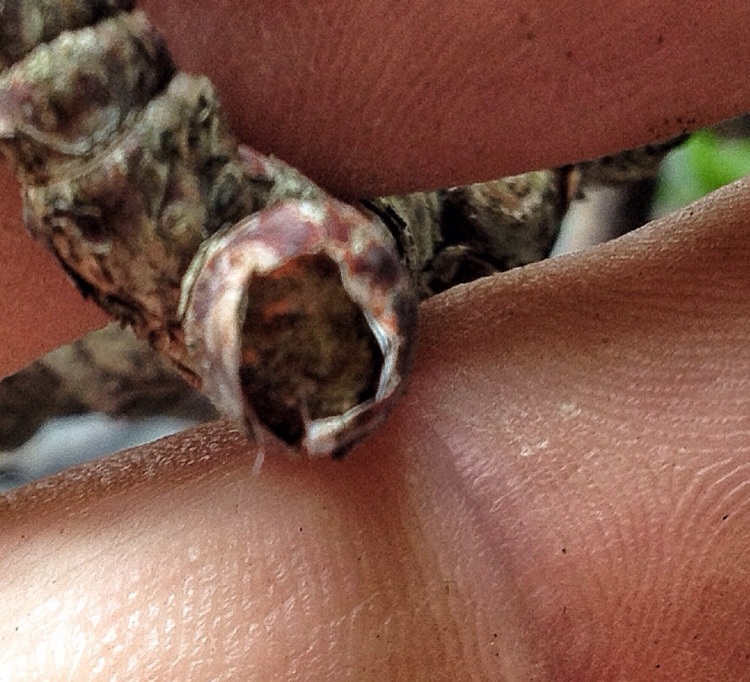 Ahhhhhhhhh!!!!!!!
Sorry, I had an episode there.
The best way to prune a jade for a dense canopy goes like this.
We have a foliage pad.

Trim each branch to two leaves. 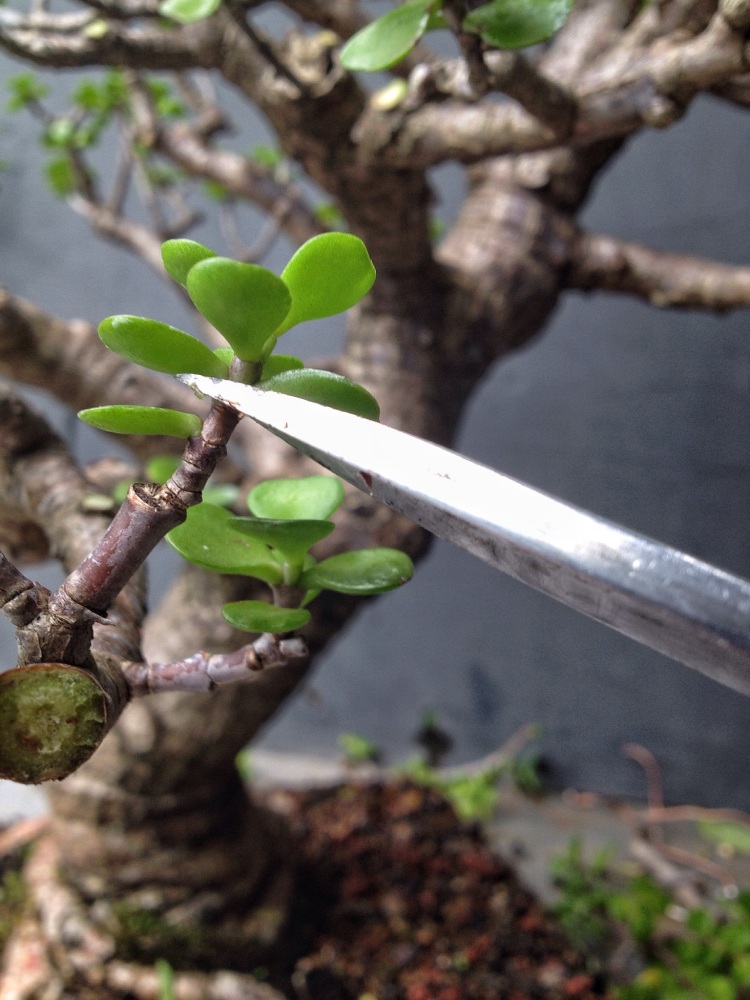 And from the junction of each leaf you should get two new buds.
Let them grow out and trim again in the same way.
During all this you have to really push the fertilizer.
The two best growers of this tree, Jim Smith and Richard Turner, put handfuls of regular time release fertilizer on them.
So much so that you can hardly see the soil surface.
Richard won the Best Tropical award at the National show several years ago with this portulacaria.

And here’s another tree from Richard.

Cool, aren’t they?
Getting back to my tree, this is how much I pruned off.

And with some wire- 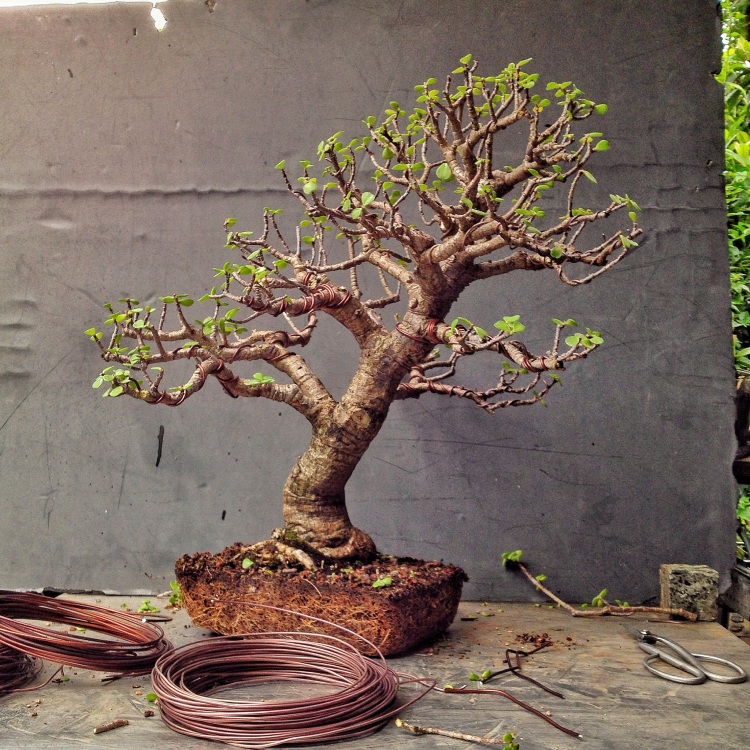 It’s time for the rootwork.
I had had the tree in this ugly pot. 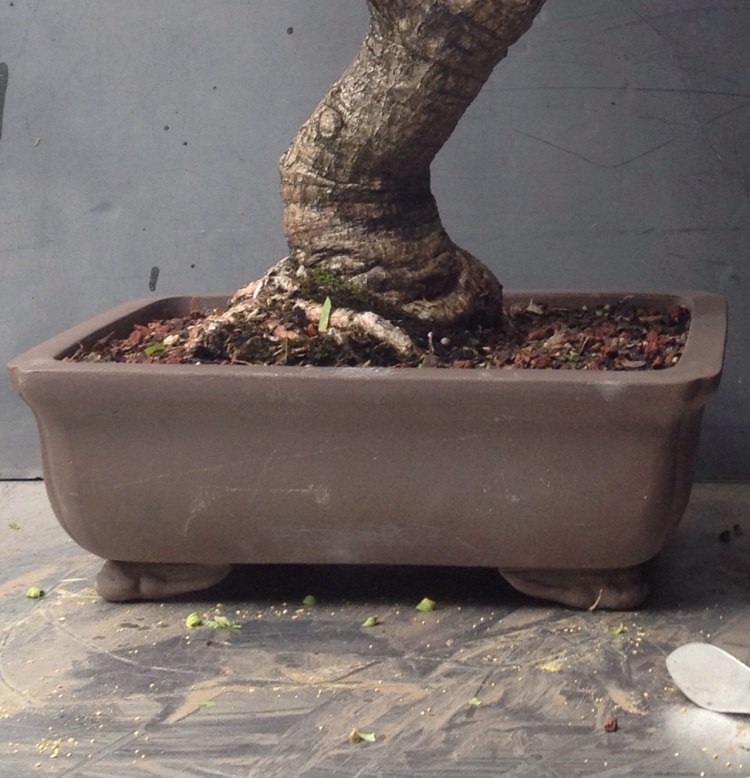 I’m switching to this fine Korean pot with superior patina.

It has mucho drainage holes too, they don’t make them like this anymore.

Ok, kidding about the pot. It’s a mica pot and the only one I have that’s suitable.
It’ll do.
Now, the customarily blurry root photos. 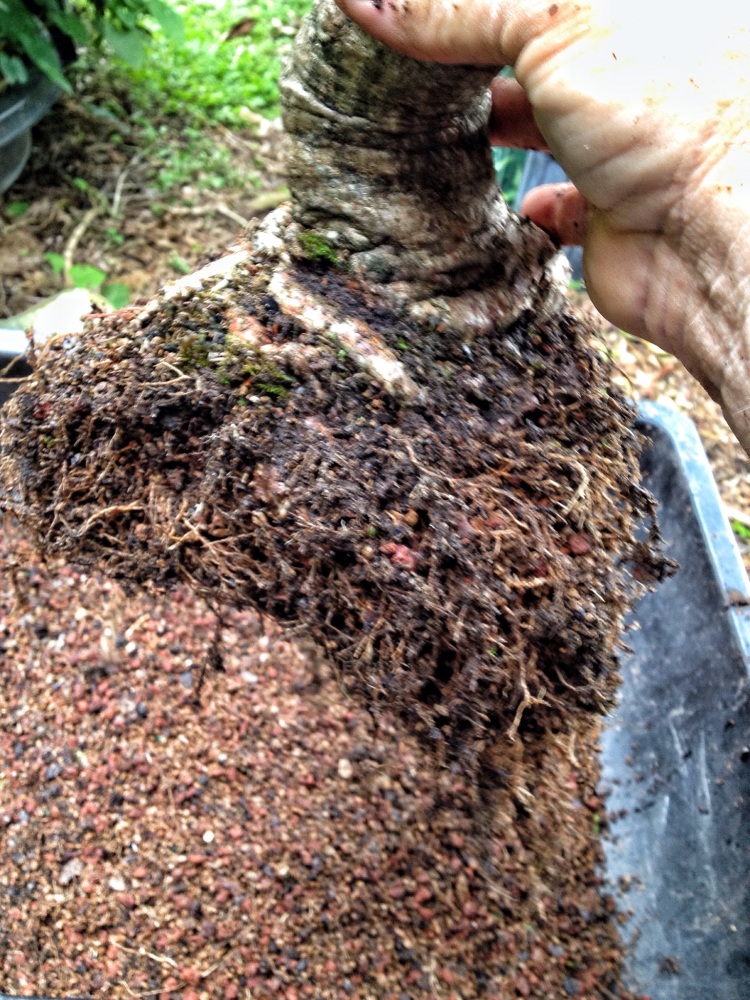 I raked out the roots and now, as you will see by the terribly overexposed, glaring white blurs, the roots I pruned out.

It seems that I am unable to get competent photos of roots. I truly do apologize.
This one came out good. 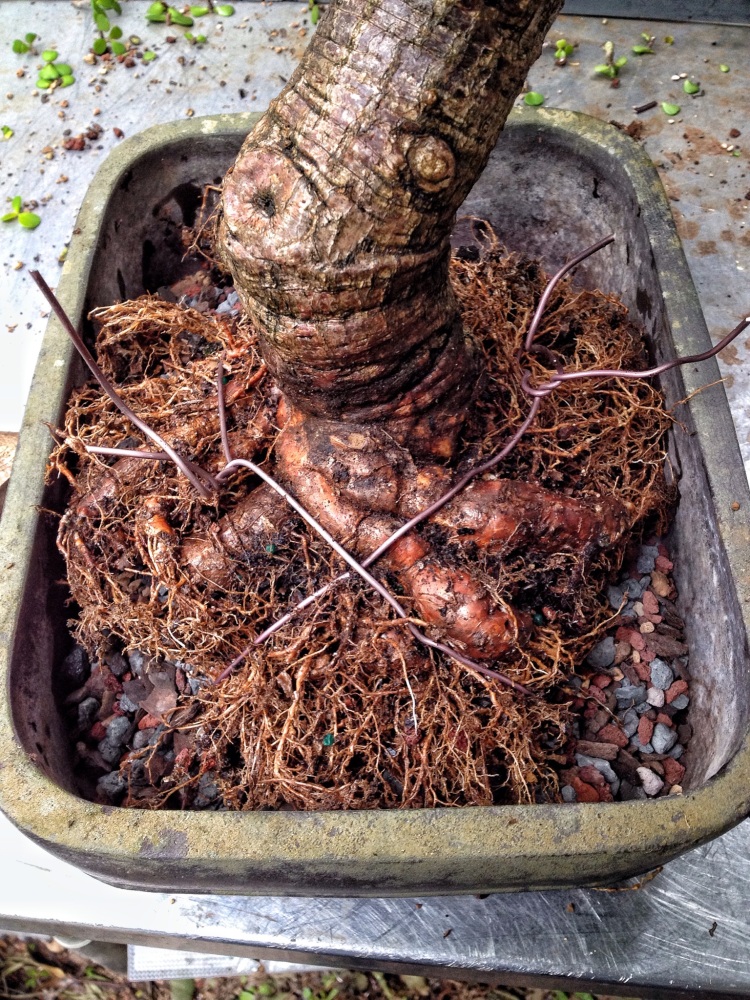 I make absolute sure that the tree is firmly tied in.
Any movement in the pot will set back root growth.
The coarsest soil I have, sifted twice.

And I make sure that the two wounds I created are above the soil line.

The next week or so the tree will stay under cover to protect it from….no, not the sun but the rain.

You should keep the tree dry until you see this.

Isn’t it cute?
That means the roots are growing and can handle water again.
A jade’s roots seek moisture, that’s why keeping it dry is important after repotting.
I warn you now, you’ll lose some (or most) of the old leaves on the tree. 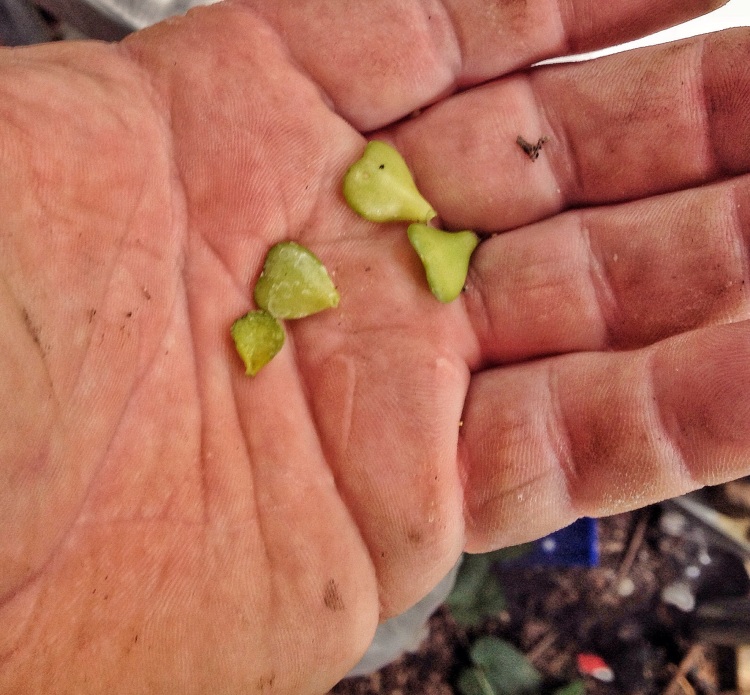 They turn yellow and fall off.
We leave our tree dry and awaiting it’s return to the sun. 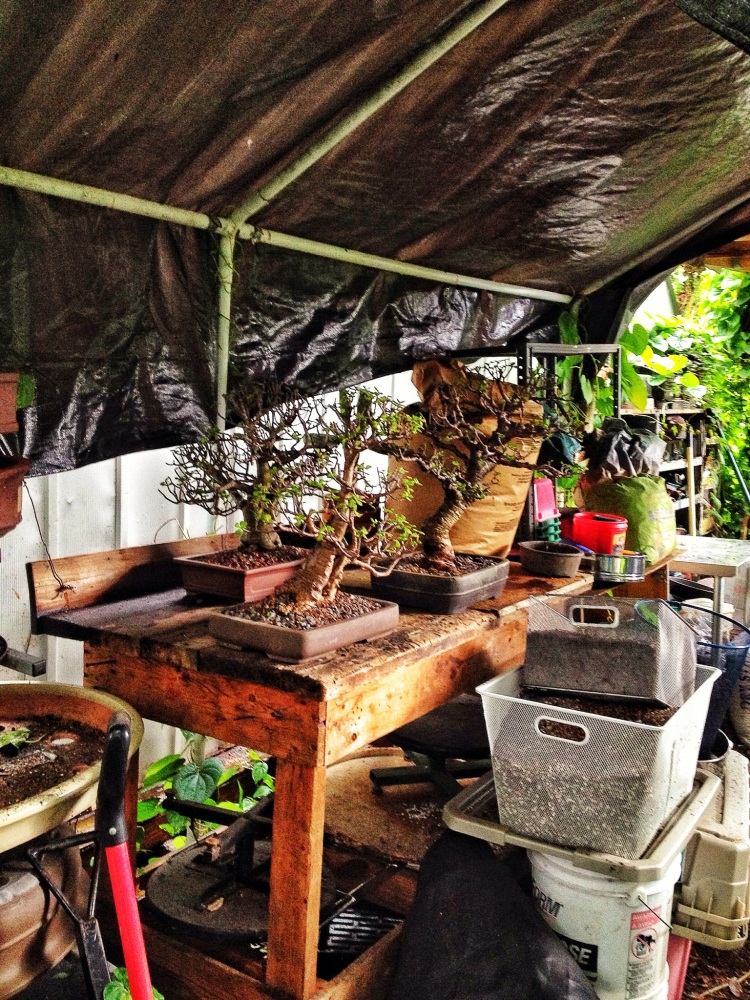 And….wait, you wanna see the other trees?
Ok, I guess.
This one was given to me by Paul Pikel. 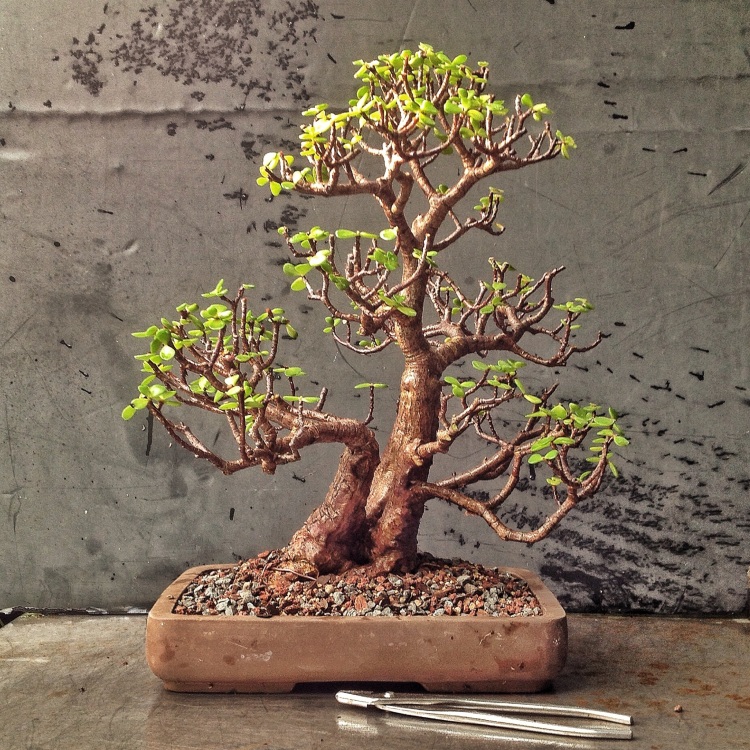 It was a big cutting that had rotted through the middle and almost didn’t make it.

The other tree is my oldest dwarf jade.
It needed prit’near the same treatment.
Repot, trim and wire.

I changed the pot. I like it at the moment but it’s still not the right pot.

And, since I’m a considerate blogger-ist, I’ll give you the before and after on the subject tree.
Before. 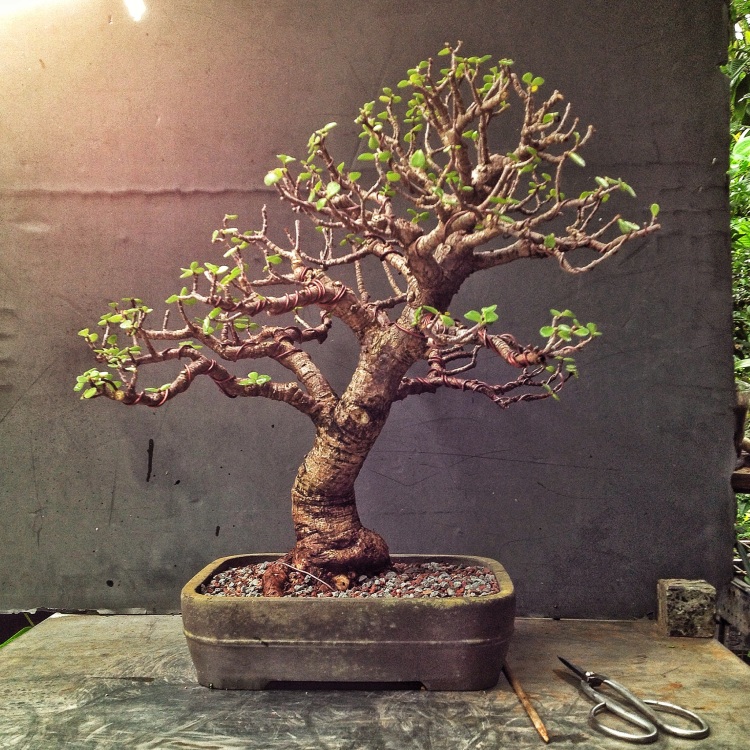 What comes next?
After the hardening off period it goes into the full sun with gobs (GOBS!) of fertilizer until the end of November (that’s about when winter starts) and it goes dormant.
I am planning an experiment this winter on some indoor growing techniques with full spectrum fluorescent lights and bottom heat and I might use this as a subject.
Stay tuned for that sometime next year though, it’s still hot as balls outside right now.