And all along you all though that caring for a bonsai tree took up all your time, sitting in the garden, babying and doting over it, drinking green tea and eating sushi. It’s not really like that. Mostly you’re just watering. To be honest, the second most common reason a tree declines and dies (behind watering mistakes) is babying it, subjecting your tree to too much work and over-pruning. Sometimes it’s best just to let it grow and ignore the tree for a while. And drink beer instead of green tea.

Now, I’m not saying to forget to water it or something boneheaded like that, especially in the summer, but letting a bonsai grow and letting it get out of shape gives the tree a chance to gain energy. And it makes for a spectacular “before and after” when one writes a bonsai blog, that’s what all the professionals do.

Here’s a neglected ilex for you (a dwarf yaupon holly, or ilex vomitoria “schillings” for those so inclined)

It’s been in the blog before so this is kinda an update I guess. I can’t find the first post, sorry. Whoever finds it first I’ll figure out a prize for them.

Since you’ve seen it last, though, I’ve removed the initial wiring and done a few trimmings. But I haven’t touched it for at least three seasons (fall-spring). It is now just about summer (damn it’s hot already, here in Orlando, I was seeing on Facebook that they just had 38 degree Fahrenheit weather up in the Ohio area, weird).

Your eyes are not deceiving you, the trunk is totally hollow. 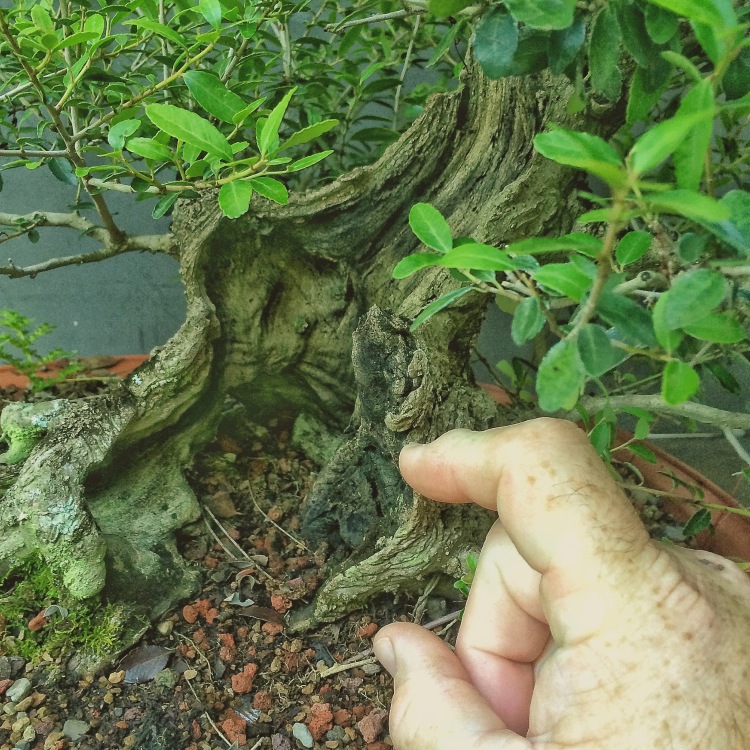 I can just about fit my whole fist up inside. 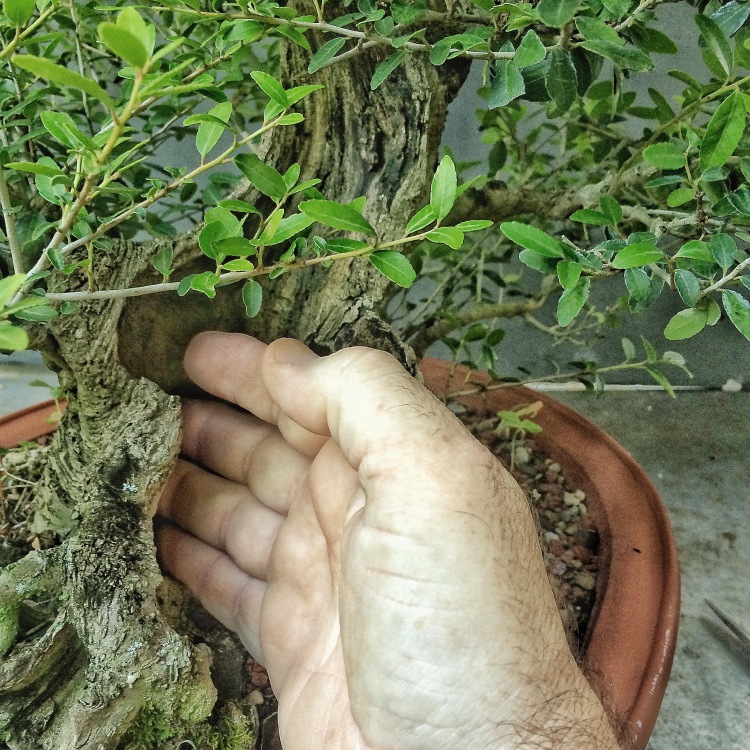 But in some states, it’s against the law to show those type of images, and since I am a traveling bonsai teacher and I don’t wish to spend any time in jail on one of my tours, I won’t.

Now, it’s a given that I’m going to cut back the bush… 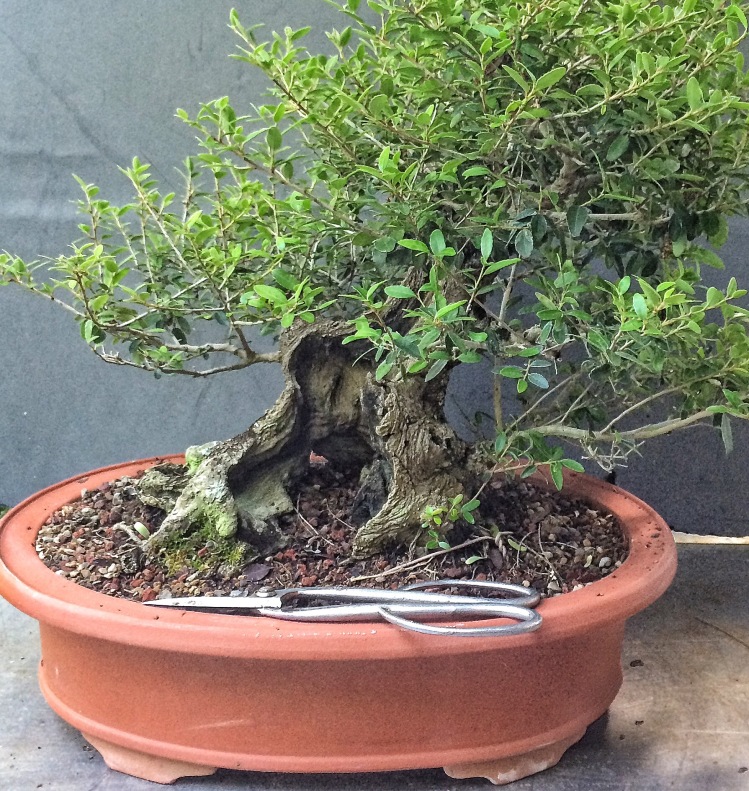 ….but I’m also going to show you how to address the soil if you might have forgotten to have repotted this year (you say “Hey! Soil, are you ready…..” Sorry, I stole that one from Bill, who you might remember, gave us the theme for the last post). Or you weren’t able to repot because maybe you were in the hospital, or in jail or something.

Speaking of jail, the Bonsai Police will be after me for the first branch:

But we must remember, even though this is Art, it’s also Horticulture; if I remove it, I could lose the whole side of the tree, and we don’t want that to happen. And so it stays.

So there! Catch me if you can Bonsai Police.

A little off the top, close on the sides…. 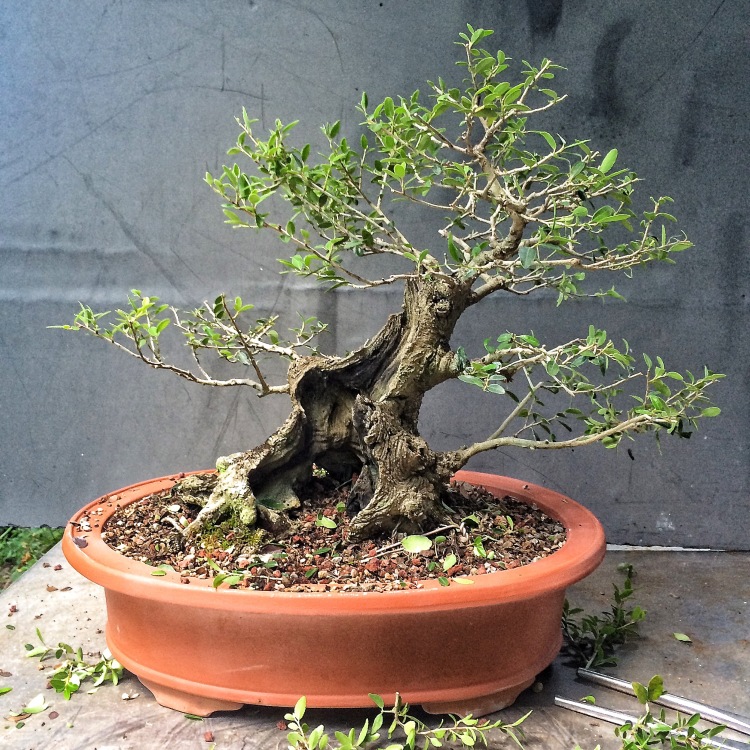 That’s a joke but, in all actuality, cutting the side branches back harder than the top, with some trees, is how you should prune them. Not the yaupon per se but let’s propose we have an azalea. Some trees are apically dominant, like a spruce or a pine, or a deciduous tree. That means that the tree wants to push all its growth to the apex, picture a Christmas tree: all pointy on top. With an azalea (and most bushes) the plant’s growth is more horizontal, it wants to create many side stems as opposed to that single, strong leader. This makes it tough to grow as a bonsai. So when pruning, you cut the sides back harder than the top. But that’s another post on another blog.

Time for some wire. 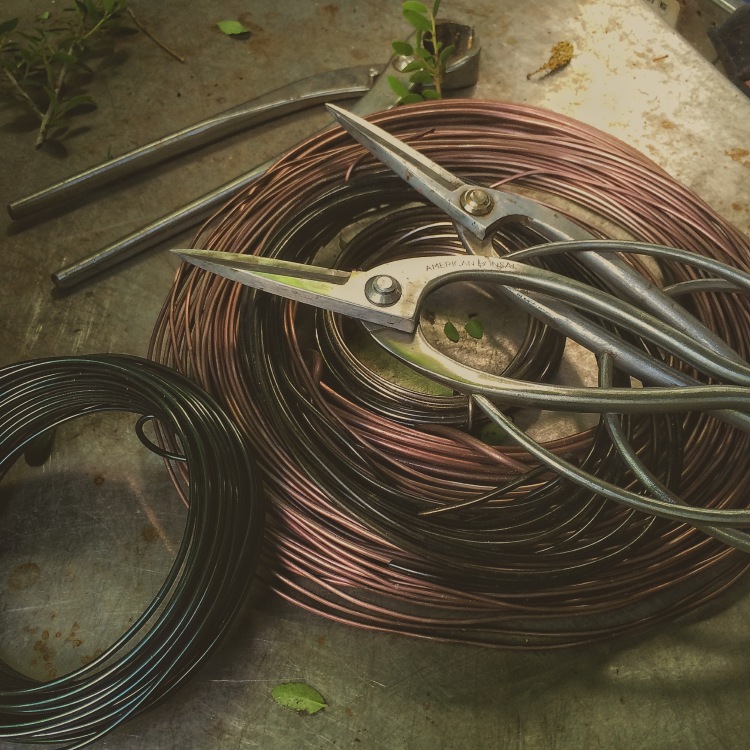 Let’s conduct a few polls: with aluminum wire, do you prefer the classic brown anodization or the new black? And, would you entertain wire with the natural aluminum color (greyish)?  For copper, do you prefer the shiny new copper look (which means an electrical current was run through it to heat it up in order to anneal or soften it) or do you prefer the kiln fired annealing process, which gives it a mottled and almost purple appearance? Let me know. Myself, I’m leaning towards a nice pink on the aluminum. It’d be purty.

While your thinking of that, let me finish the wiring.

The tree didn’t get repotted this year (it’s too late to do it now) and summer is coming. In Florida that means 90f degree plus temps but with rainstorms that could dump more than 3 inches of rain at one time. The ilex puts out copious fine feeder roots that clog the potting mix and that makes it a priority to repot often.

Combine that with the leftover organic fertilizer (I don’t use cakes or pellets or tea bags. I apply it right on the soil. My practice and my prerogative) and it means that this tree will stay too wet at times but will dry up fast if we have a dry day. Oh, woe is me, what’s a bonsai person to do?!

Using a chopstick, or some similar pointy thingy, rough up the top half inch or so of soil (this won’t hurt the roots much, think of all the damage done to the roots on the soil surface in the wild by falling branches, small woodland creatures, smurfs,  and the ever growing cast of survival show people, compared to that, a little chopsticking is minor)

Then dump all that crap out. (Literally in this case, the fertilizer I use is derived from what the scientists call “poo”).

Then, returning to the chopstick, poke some holes in the soil all the way down to the pot’s bottom. Maybe one hole every inch or so. Put some fresh fertilizer down.

An backfill the top with new soil.

And mix the whole mess in well. 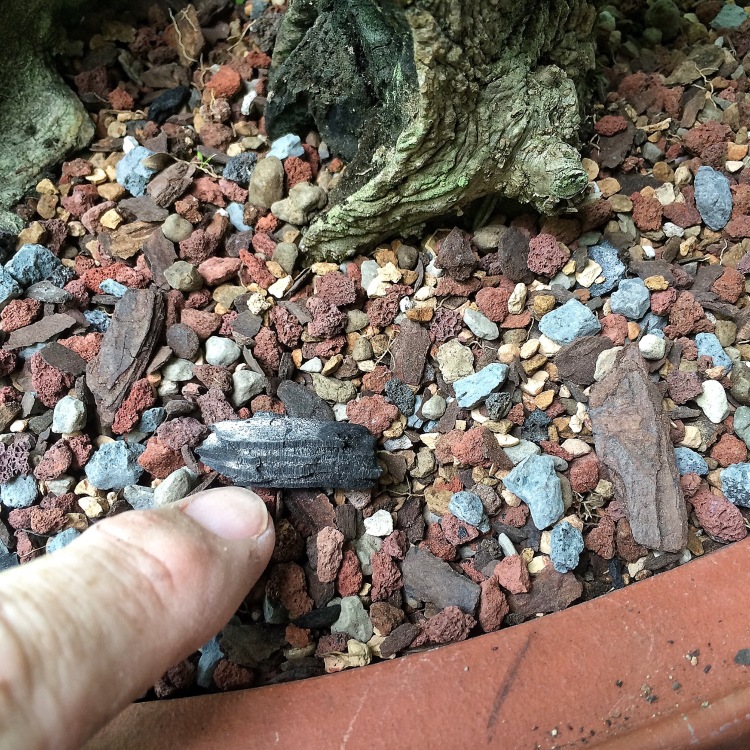 Horticultural charcoal to be precise.

Let’s see how much trouble I can get into dissecting the characteristics and usage of charcoal in a soil mix.

Charcoal is usually made of wood, combusted in a limited atmosphere. It could also be bone or other animal/vegetable matter. Do not confuse charcoal with charcoal briquettes, those chopped and formed stars of backyard barbecues all over the country. They have bonding agents and most have lighter fluid impregnated in them to make them easier to light on fire. It’s safe to say, we do not use charcoal briquettes in horticultural applications.

There’s also this stuff called agrichar and many people use charcoal and agrichar synonymously. And they are close in makeup and use, but the agrichar group distinguishes the two harshly (Aha! There’s the rub. You see, agrichar is a politically charged subject. When you research it, therefore, everything you read about it must be read with a grain of salt). The biggest difference is that agrichar must be sourced from strictly vegetable matter, must be from waste products, and must be sustainable. Which is funny, because it evolved from this thing called terra preta, an Amazonian type of soil that has clay pottery shards and charcoal amendments that itself, evolved from the much derided slash and burn method of nourishing the poor Amazon soil that is partly being blamed for the deforestation of the South American Rainforest. I won’t go into detail about either agrichar or terra preta but I suggest you look into it further, it’s an interesting read. Just remember that grain of salt. There are agendas being pushed. Speaking of which……

There are agendas (and reputations, commercial interests, and even entrenched traditions) in the use of charcoal in bonsai soil. Therefore, the research I did was purposefully not done in the bonsai world. Why? This is a bonsai blog, ain’t it? Well, for some reason, most “evidence” presented in the bonsai world is anecdotal. Which means that _________, who’s been doing bonsai for thirty years, has great success using _________and he must be right but then that new Japanese apprentice dude from_____just said that using __________is wrong because he just finished his Japanese apprenticeship and his Master says that we should never use _________.

Let’s go to the science, shall we?

Basically, charcoal is an organic additive to the mix that serves the same purpose of, say pine bark or fir bark. But it doesn’t break down as fast. That purpose is  to provide a high C.E.C. component that holds nutrients and releases them to your tree when it needs it and provide an environment for the various microorganisms necessary for a healthy soil. Charcoal’s structure is better than bark because the hard chunkiness of it won’t compact like bark could. It’s drawback is that it will change the ph to a more alkaline state, so acid loving plants (most flowering/fruiting varieties) may not appreciate an addition of charcoal.

It does not purify the water you apply to your trees, unless you are using nothing but charcoal and it’s an “activated” form (I won’t get into that, other than to say that horticultural charcoal is not activated).

It does not filter out excess synthetic fertilizer salts, no charcoal does. Period.

Some people say it deodorizes soil. It could but I don’t think there’s enough in the mix.

It does “sweeten” the soil, which means to make it more alkaline, which I covered already.

It makes your trees smell like a good, slow smokin’ barbecue joint. Always a plus. Hmmmmmm….

It is a good amendment to bonsai soil, but not for the reasons usually stated. And with that, I’m thinking I’m done talking about charcoal. If you are foaming at the mouth at this point, feel free to criticize, please don’t cite anecdotal evidence when trying to eviscerate me though. Thanks, I appreciate it.

Anyway, back to the tree….. since I’ve finished it while I’ve been boring you with all my scientifical declaratory sentences. 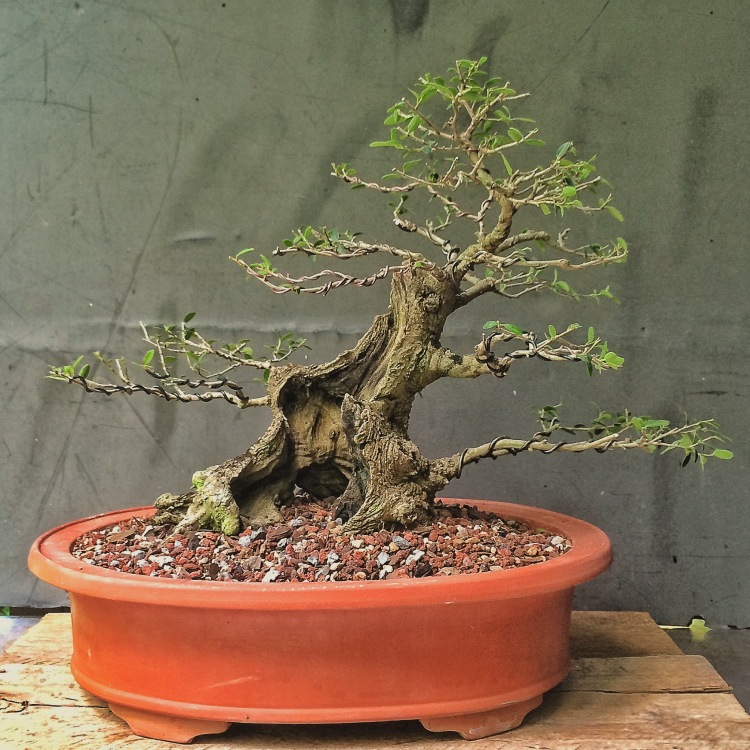 I really need a different pot but the tree is looking good. Let’s crop the pot out. 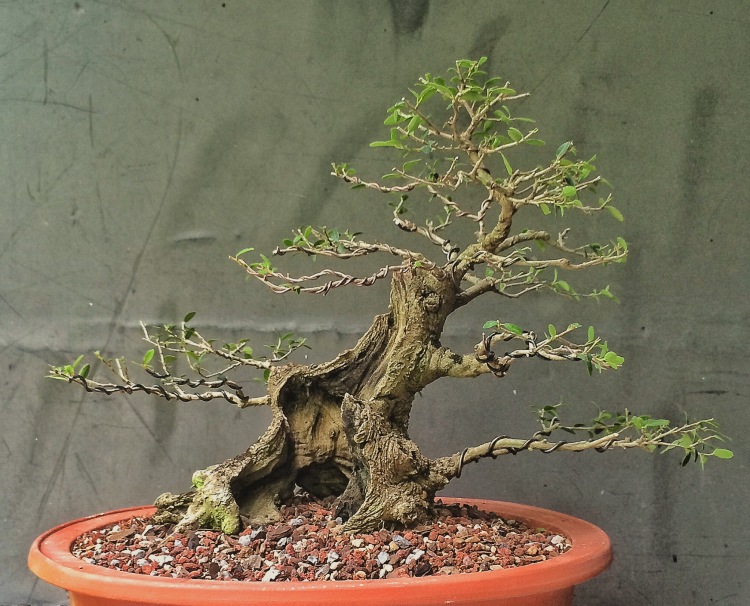 You know, I’m not really sure what type of pot the tree would look best in.

Oh well, that’s a puzzle to be worked out next potting season. With that, when eating your charcoal for that detoxifying effect that they talk about on Facebook, make sure you chew it thoroughly and drink lots of water. And brush your teeth, black is not your color.