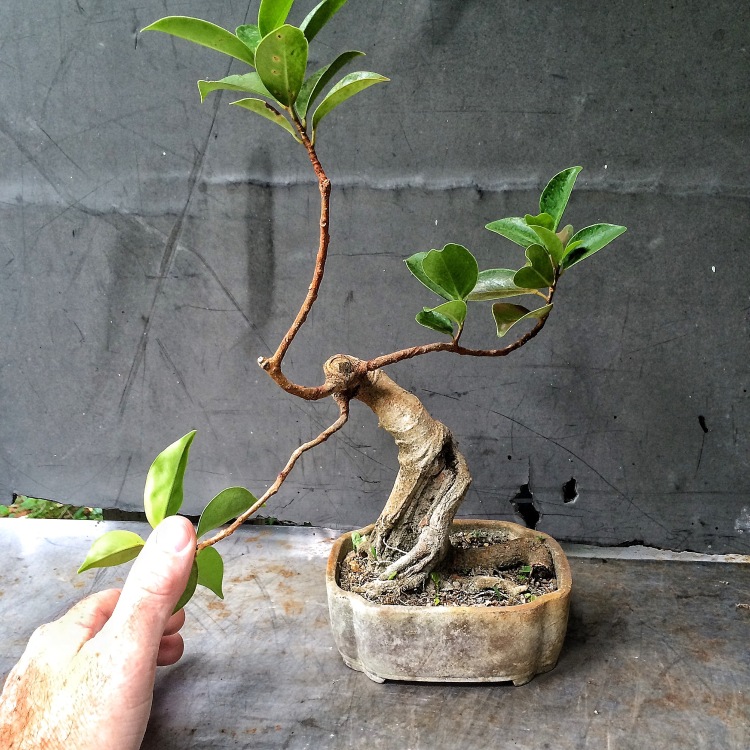 As I may have mentioned, I had plans to attend the 2015 Bsf convention over this past Memorial Day weekend. I took some pictures and did some interesting things while there and I promise I’ll be writing that blog soon. But I wanted to cover this tree in a quick post before I write that one, which might prove to be a marathon session.

This tree was one of my acquisitions from the vendor area, from Mike Cartrett actually, it’s a ficus microcarpa. He got it from a man selling off his excess trees, which is something he does a lot of. 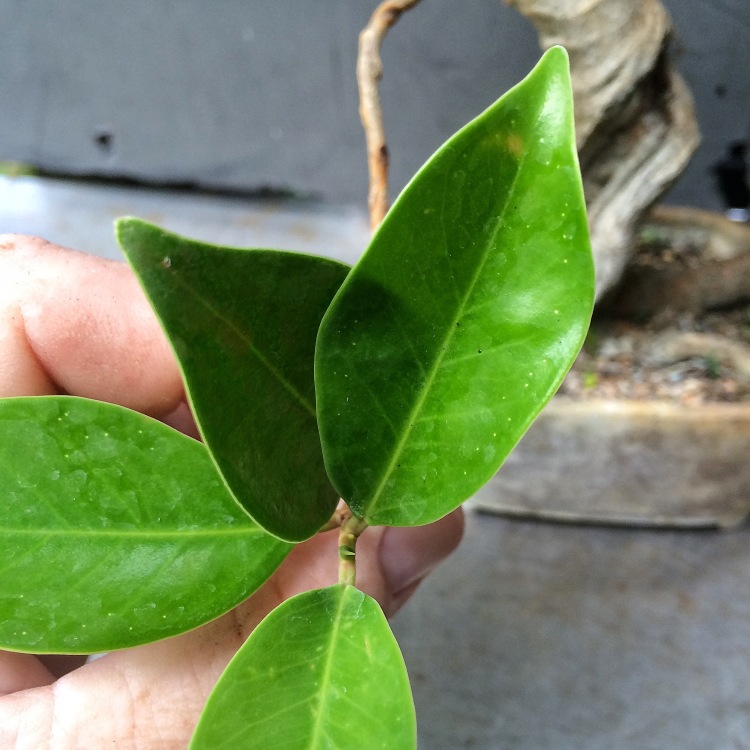 The tree is the microcarpa species and not one of the many varieties, which you can tell by the white dots on the leaf. 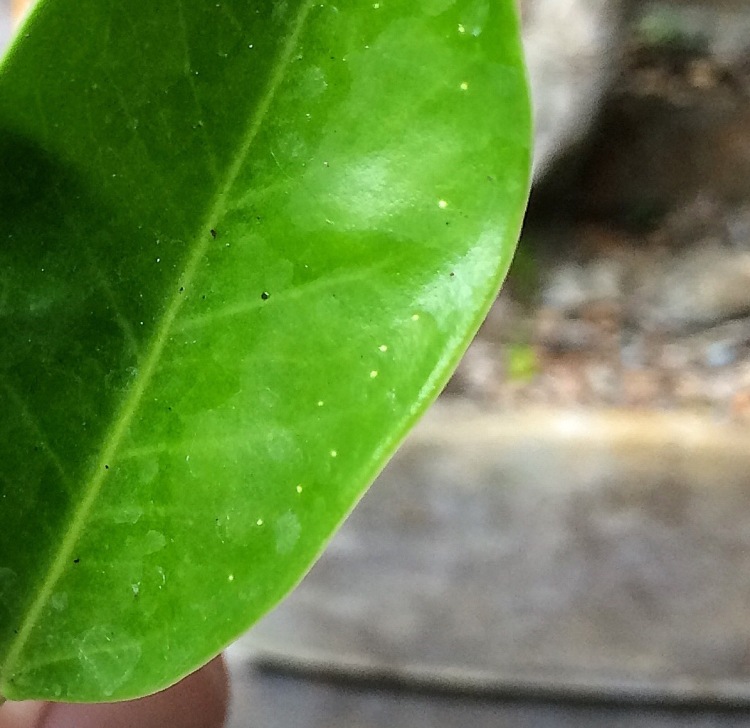 Ficus Benjamina has the same dots too, but it’s easy to tell them apart; the f. microcarpa leaf is about twice as thick, generally. This poor tree has been neglected and abused something fierce. Look at the calcium buildup on the pot: 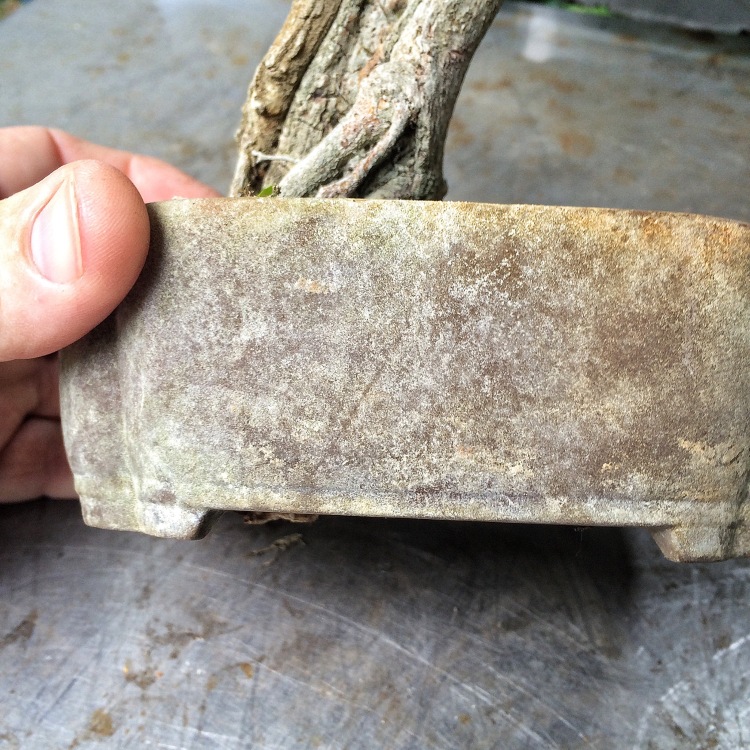 and it’s all over the trunk too. And when we say “root bound”, the photo in the dictionary should be this one. 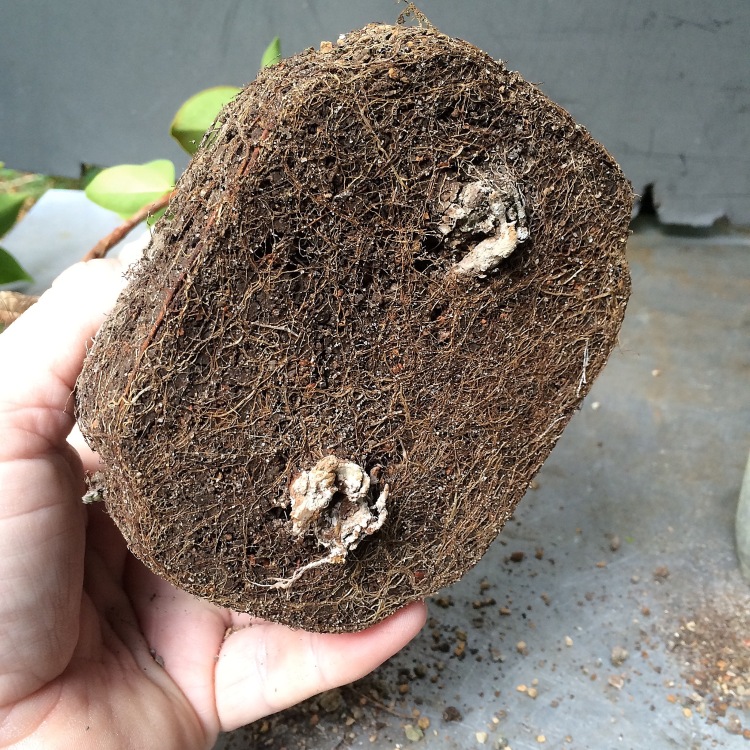 It’s a tough tree, remember that this could be an epiphytic plant for many years before its roots hit the ground, it needs to be able to live in inhospitable areas. Speaking of which: combing out the roots… 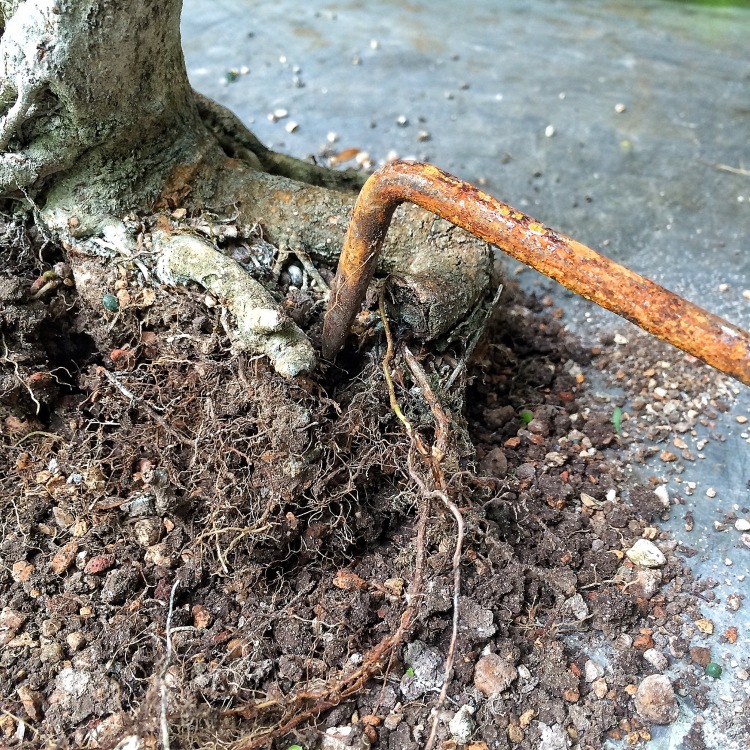 There’s so much calcium and lime, I’m surprised that the tree isn’t way more yellow than it is. That might be because of the excess iron in the previous owner’s water too. Probably well water. 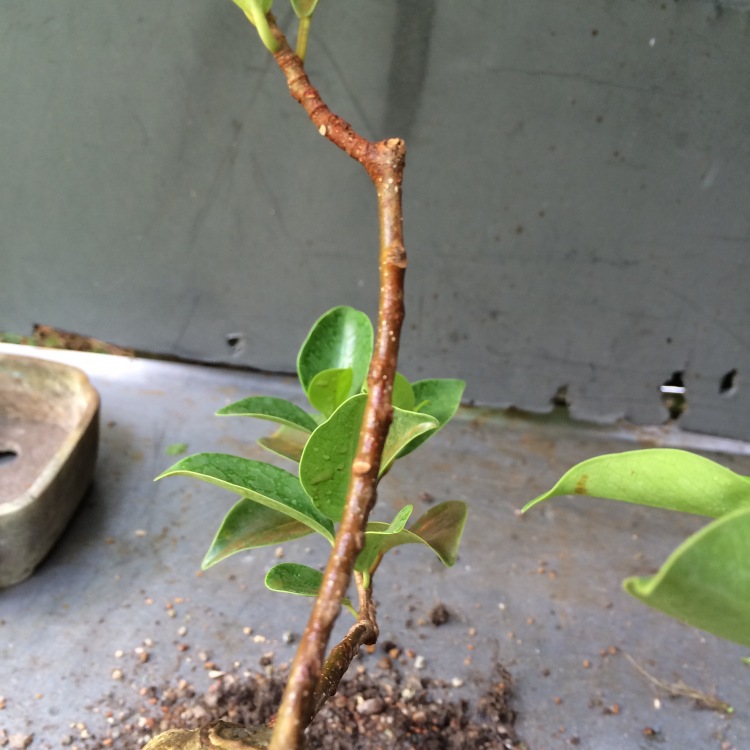 How do I know about the iron? Rusty branches. The leaves are not as green as they could be, but they’re not severely chlorotic either. There are many formulas and secret ways of removing this water scale and rust  from the trunk. But, since I don’t have any muriatic acid on hand and I’m not willing to sacrifice a rooster (the full moon is a week away anyway) I’m just going to use….. 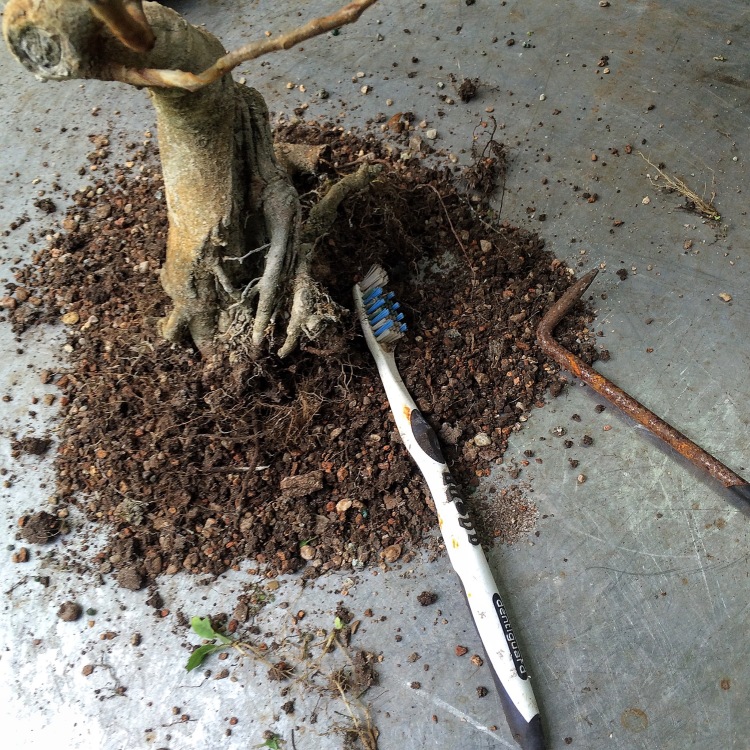 A toothbrush (if you have a significant other, using their toothbrush is best) 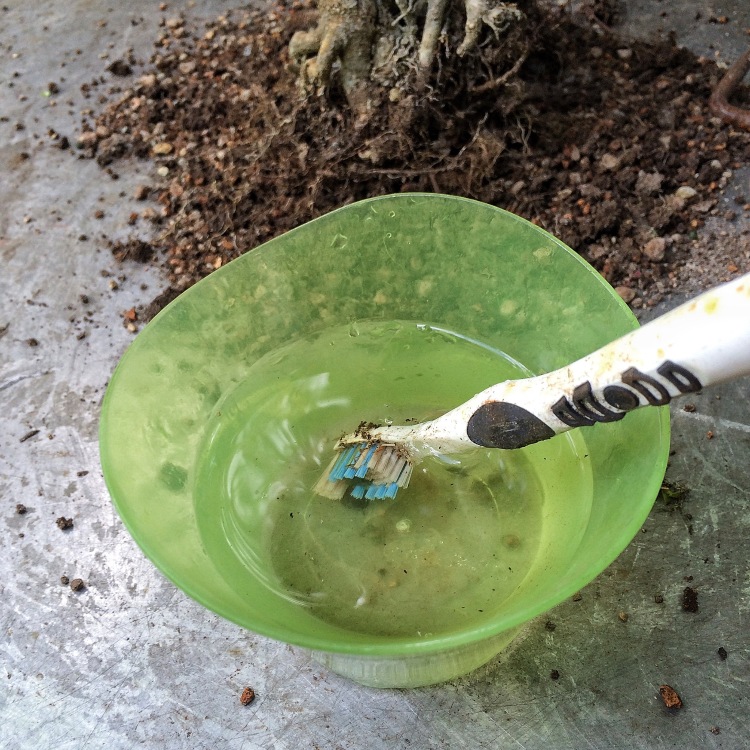 And water. Let’s see how well it works (Hah! Get it? I’m using water to remove well water stains and I’m asking how well that works….ok, sorry. I’ll be quiet now) 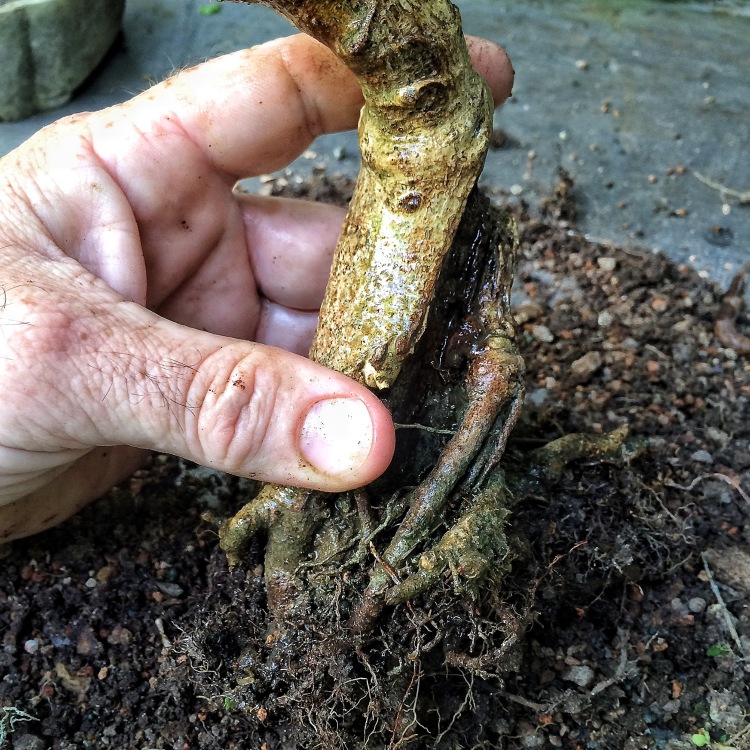 Not bad. There was a lot of gunk that came off. Now, a little root work…

Bend this to the right to give it a better flare. 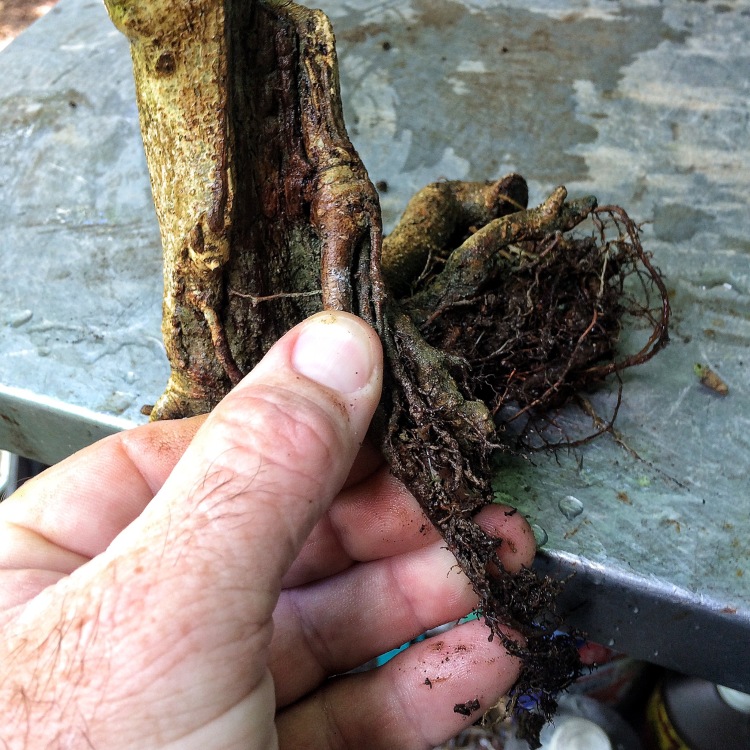 Shave this part down a bit. 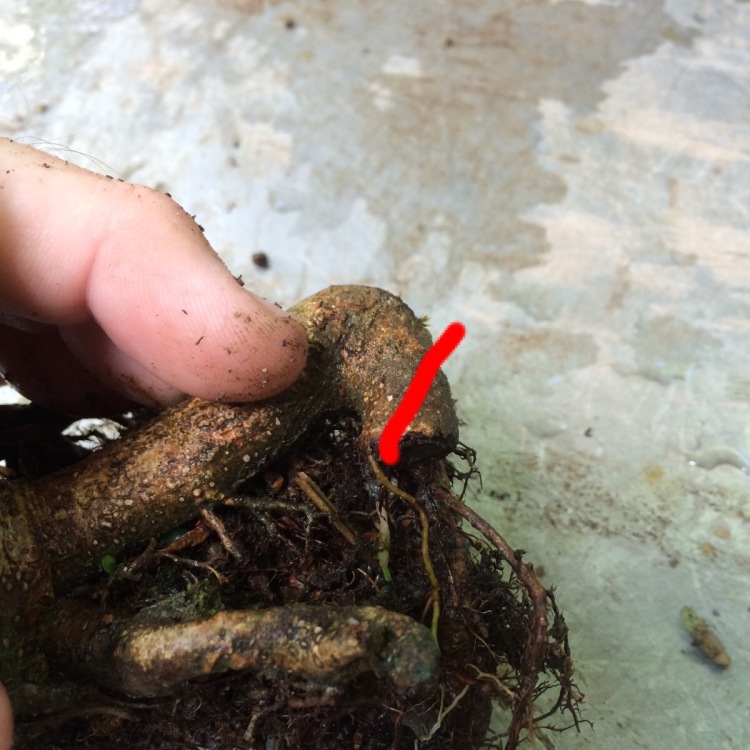 And remove this one entirely. It’s pointing up. 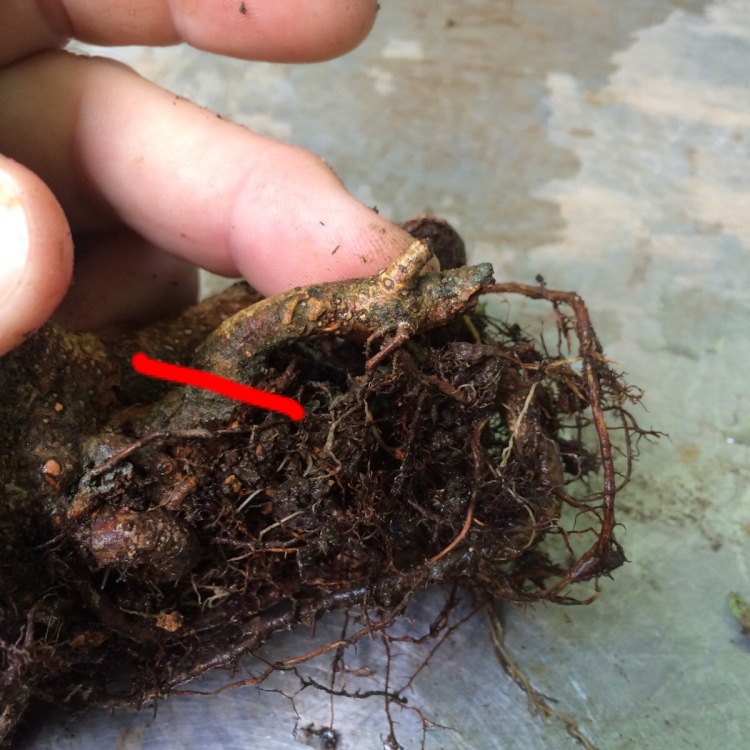 I’m putting it in this six inch grow pot.

And I’ll use bonsai soil. This should increase the root mass dramatically. And, as the roots grow, so do the branches. 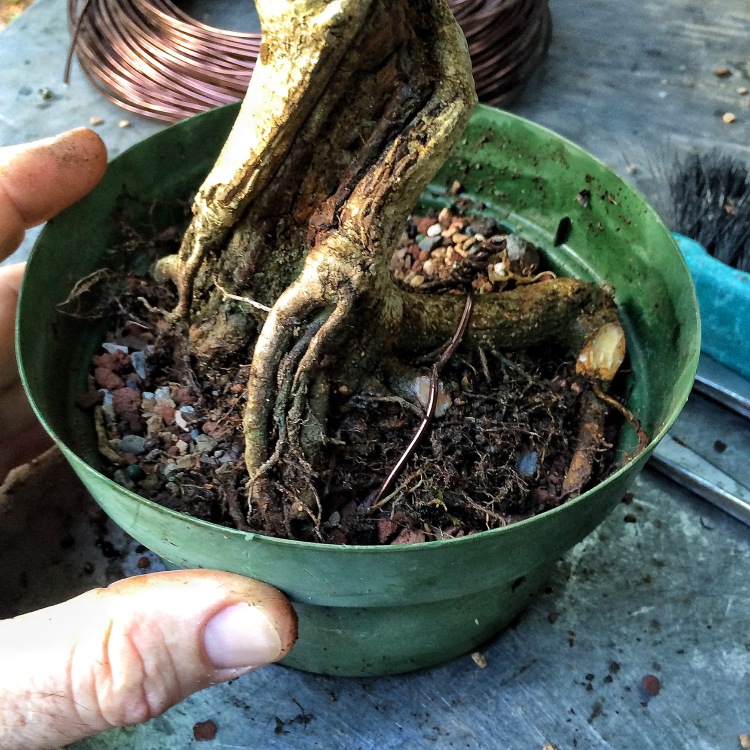 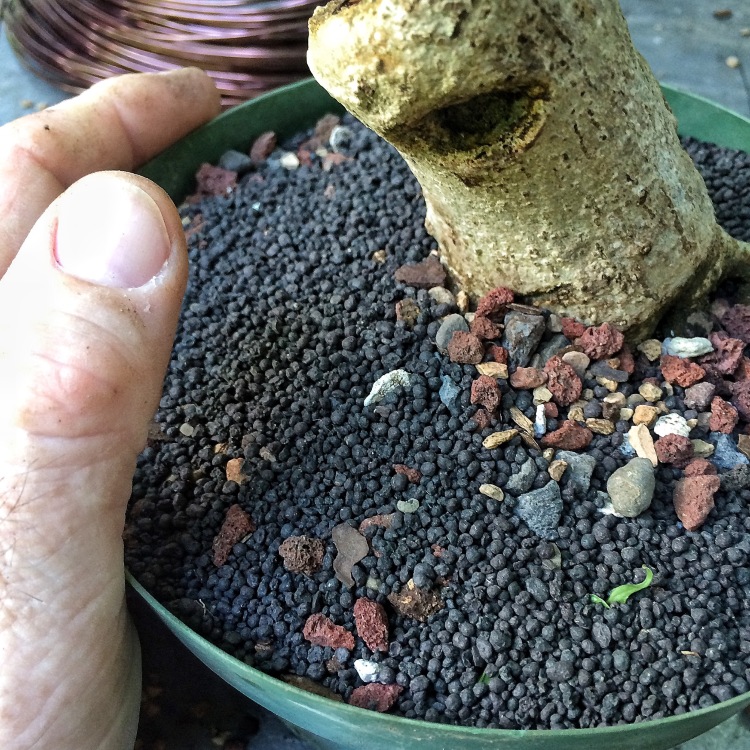 Now for the branches and leaves. It might be prudent to leave every leave on (leave every leave? No? C’mon this is a tough audience) which, logically, should increase the vigor. But this is a ficus and I know ficus. Which means that I know how to manipulate the growth processes. Attend! First: all this should be done in the summer, and outside, with adequate water, and the tree should be growing.

Here’s proof, this one has new growth. 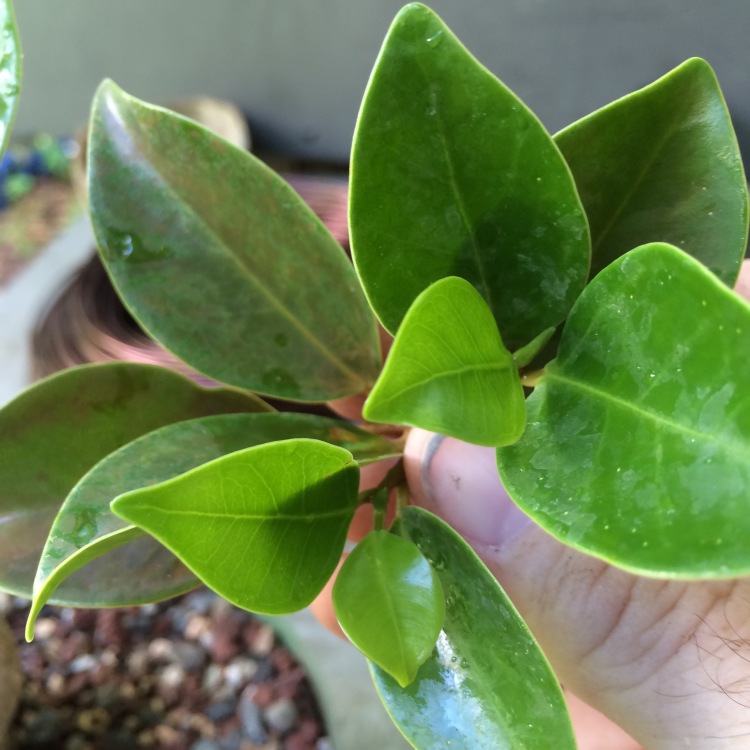 There are several old leaves that I will remove. 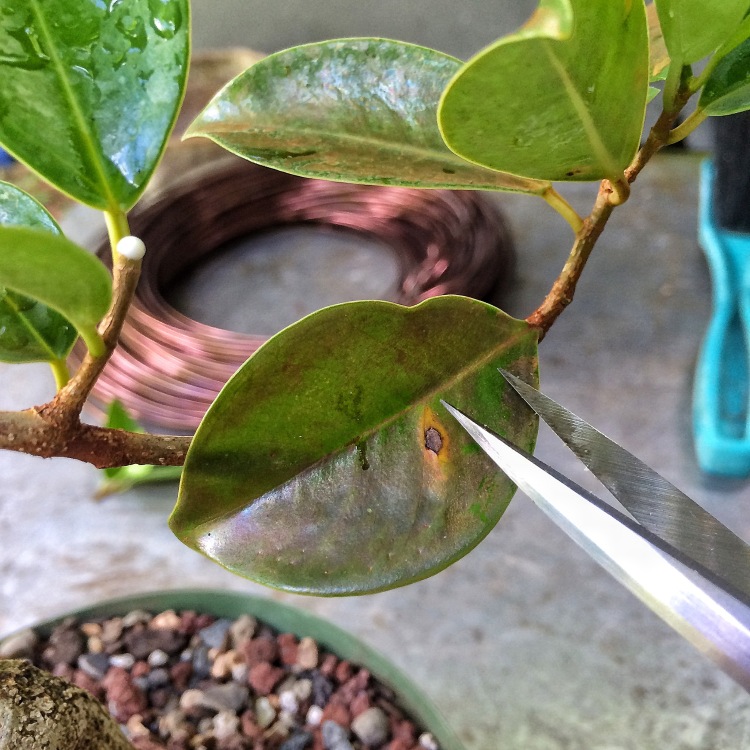 The reason is, they are rust stained and some have damage. These leaves, in the presence of those new leaves, are energy users as opposed to energy makers (first rant: plants make their own food, or energy, through photosynthesis. Which is why I never say “feed your trees” when talking about fertilizing. Ferts are more like vitamins and minerals. Those who say “feed your trees” are just ignorant or lazy linguists. Definitely not the cunning linguist I am, if you don’t believe me, just ask my wife). What I mean by that is, being so dirty and damaged, not much photosynthesis can occur and the leaves will use more energy than they make. Especially in the presence of new growth. It’s best to remove them and maximize energy production.

I don’t like the way this branch is emerging out of the crotch, So we remove it. 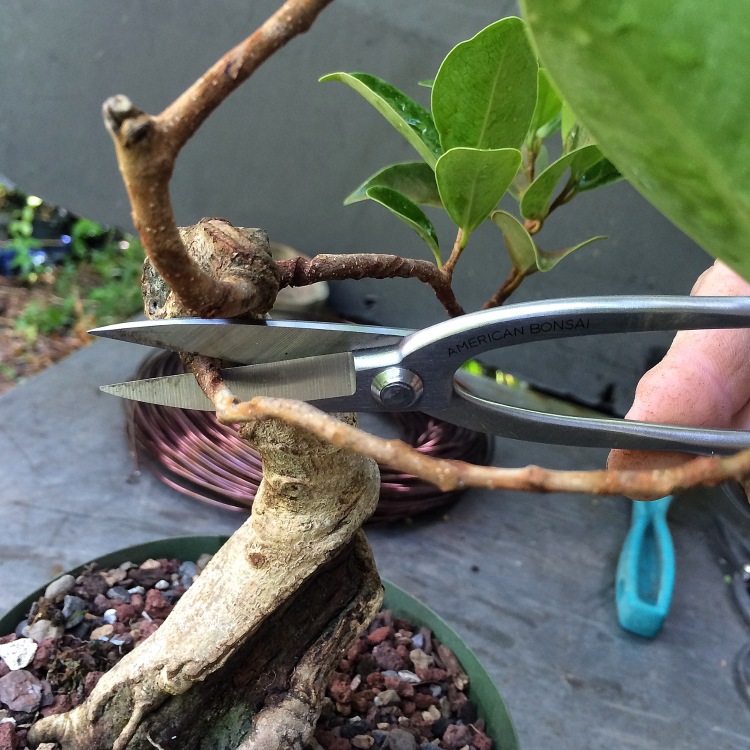 I haven’t decided which will be the leader yet, so I’ll leave the other two branches alone. I have time to decide, though. So no worries. 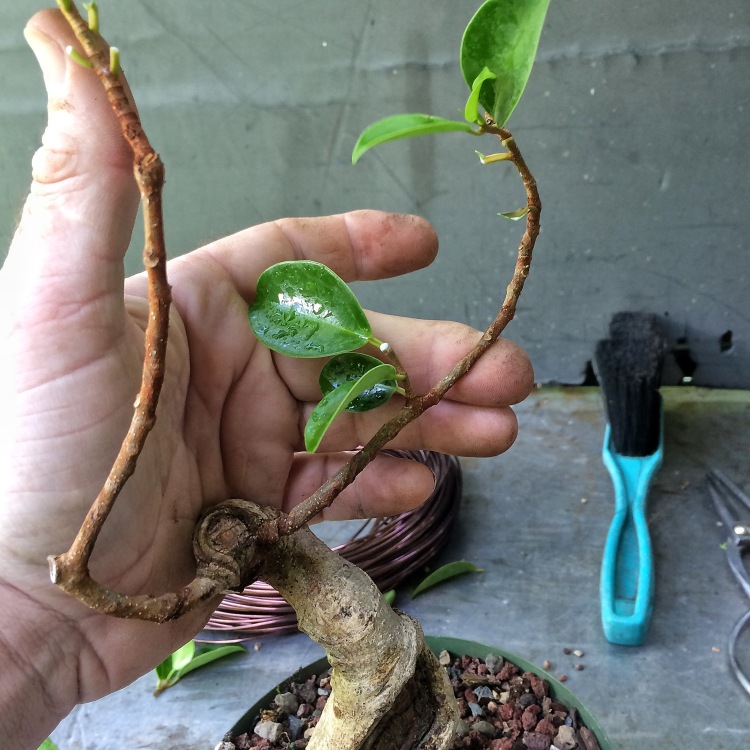 Which just leaves us with the explanation of the title to this post.

I’ve heard often that it’s important to make sure the pre-bonsai you buy has adequate low branches. This advice is true, with certain, specific trees, mostly conifers. If you are buying a deciduous tree like an elm or maple, or a tropical like this ficus or such, you need to look at the trunk and the base first (the japanophiles use the word nebari when talking about the base. Mostly it makes them feel learned. The actual English term is “buttress” or “buttress roots”). With a good trunk (remember this concept, it’s important) you can always grow the branches.

Otherwise you are left with growing the trunk…. 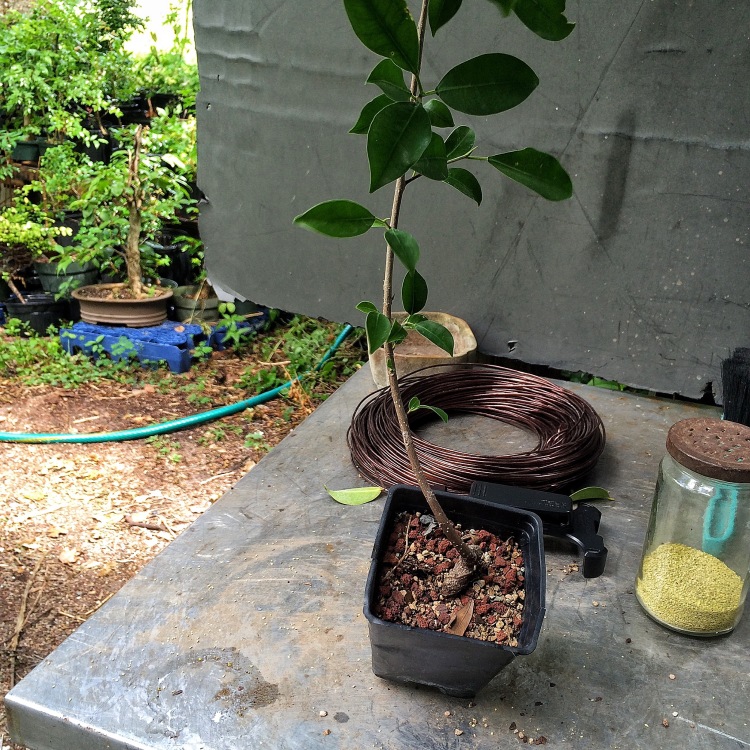 And that’s not doing bonsai at all. Let someone else waste their time doing that. This little stick in a pot will take 5-10 years before its interesting enough to even consider starting in bonsai. And, before that smartass in the peanut gallery asks me why I have cuttings, it’s because I have a nursery and I can. I also have more bonsai than he does, too, and I don’t waste my time worrying about this (and the other hundred or so) little microcarpa cuttings that just need watering. And in ten years I’ll “discover” it again and wonder where a great tree like it came from. Or… my wife will be throwing it on the burn pile because, as the most famous traveling bonsai artist Rockstar in the USA, I’ve missed our wedding anniversary again (June 15th btw) and she’s just done. Over it. Through with me. She’s already smashed my guitars and tore up my books and is starting on the trees now.

I have a too vivid imagination sometimes.

So, if you don’t want that to happen to you, the smashing and the burning and all that, don’t worry about the branches so much. 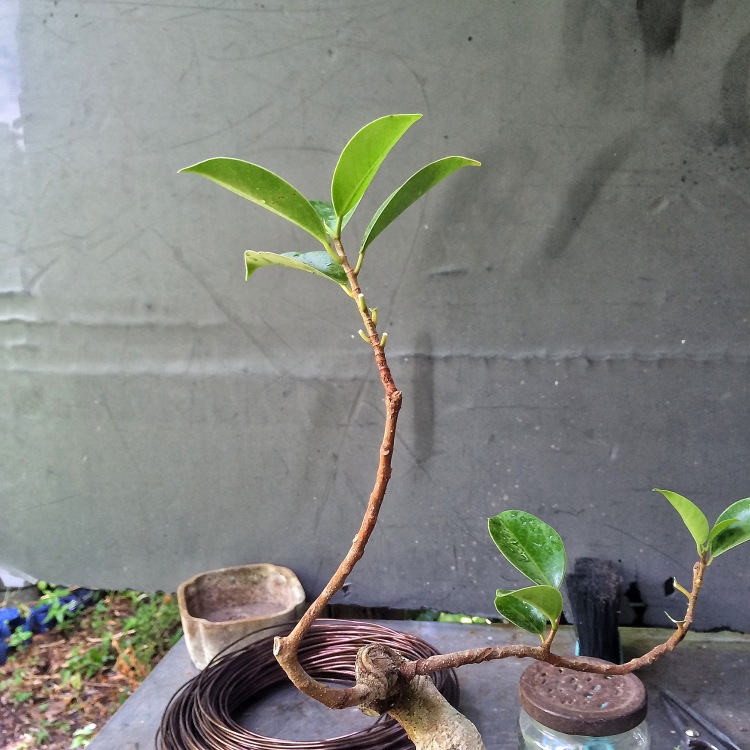 (I’m not, obviously). Focus on a well developed, interesting trunk. 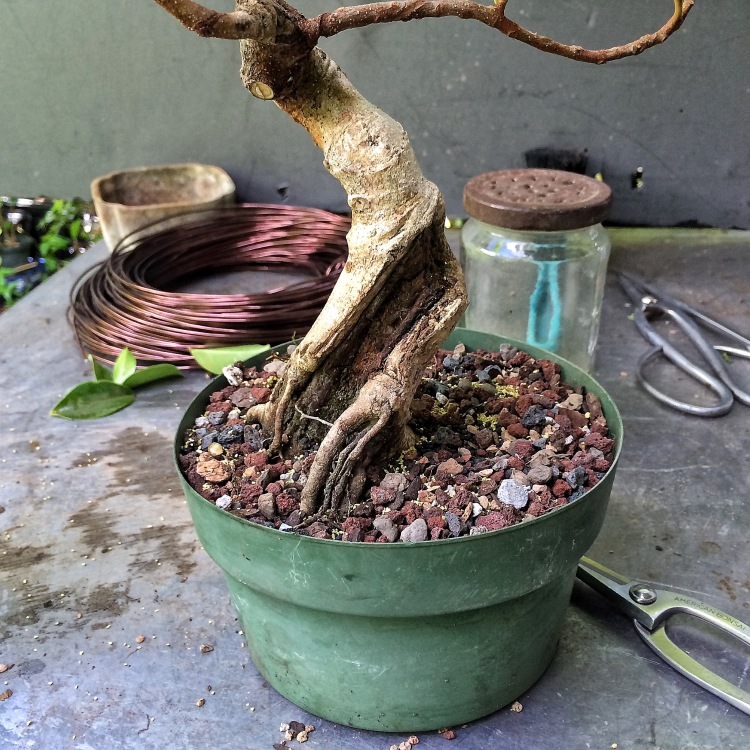 And grow the tree. See the future. 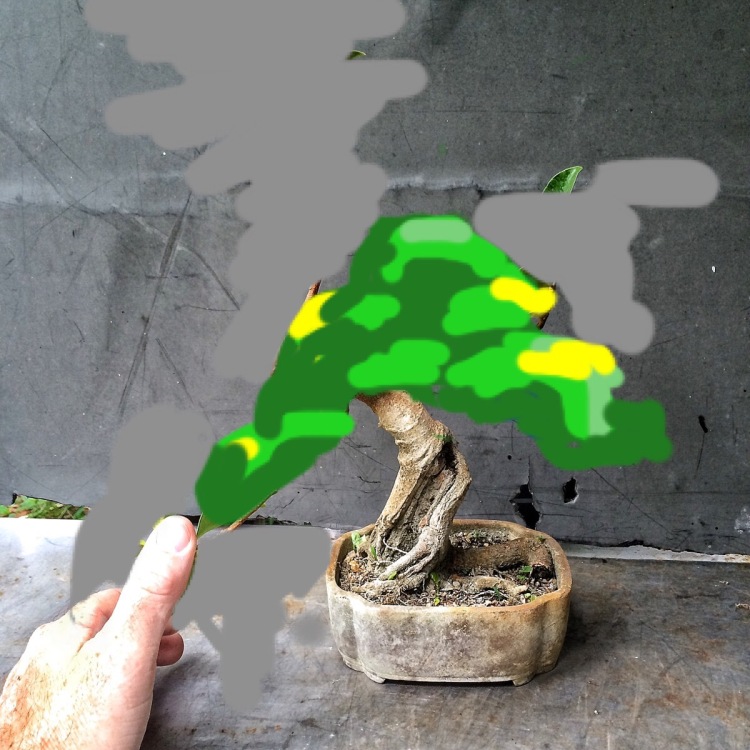 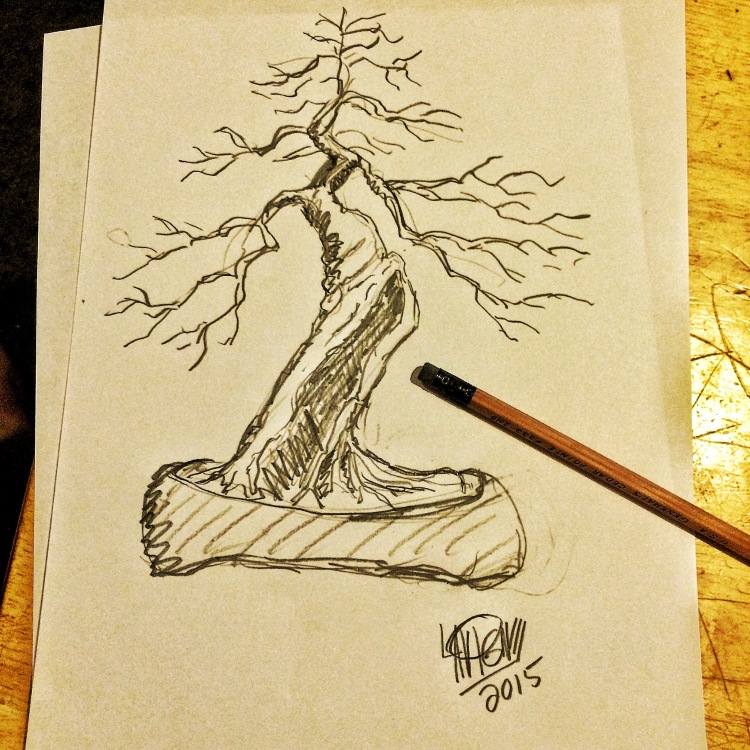 And now, I’m off to apologize to my wife for something that may happen a decade hence. Wish me luck my friends.