I’ve been a ficus fool, so many trees,  I’m so cool. Bonsai trees will make you drool, so much saliva, it will pool. I have ficus blood all over my scissor tool, white sap everywhere, like a true believer of Zuul.

Ficus salicaria, the vaunted willow leaf fig (a fig is a ficus is a fig is a ficus, all the world around. Pronounce it “fee coose” in the Spanish speaking countries, por favor. And, it’s a fig in the UK, ya’ wankers)

Ficus microcarpa (the old and ignorant still want to call this a retusa. Yeah, I said that…) 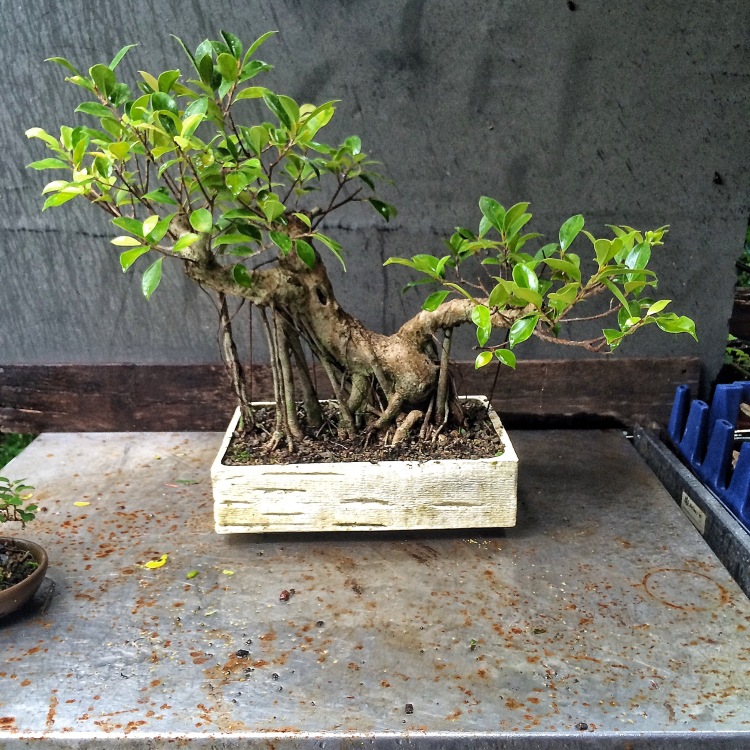 Ficus burtt-davyi (The species was named in honor of the argostologist and botonist Joseph Burtt Davy, who worked in South Africa between 1903 and 1919, where this ficus is native)

And, lastly, another ficus microcarpa. I’ve nothing witty or smart to say about this one. Sorry. It’s in a green pot, it’s oval….

Let me start with the willow leaf…. 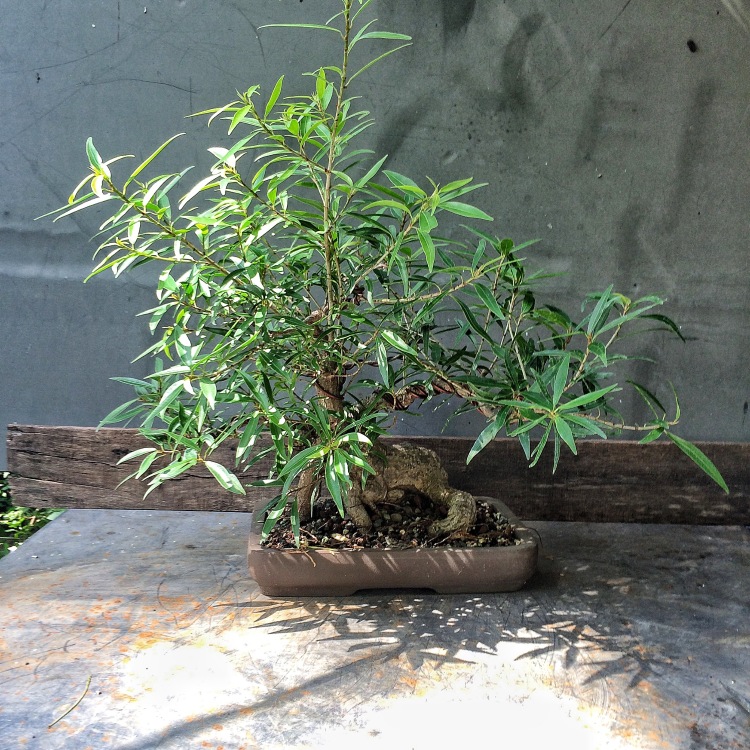 I did an initial styling not too long ago and here’s how it looked then.  The tree came from Alabama and a friend named Fred.

I think it’s filling in well, considering. It’s even throwing roots out of the pot. 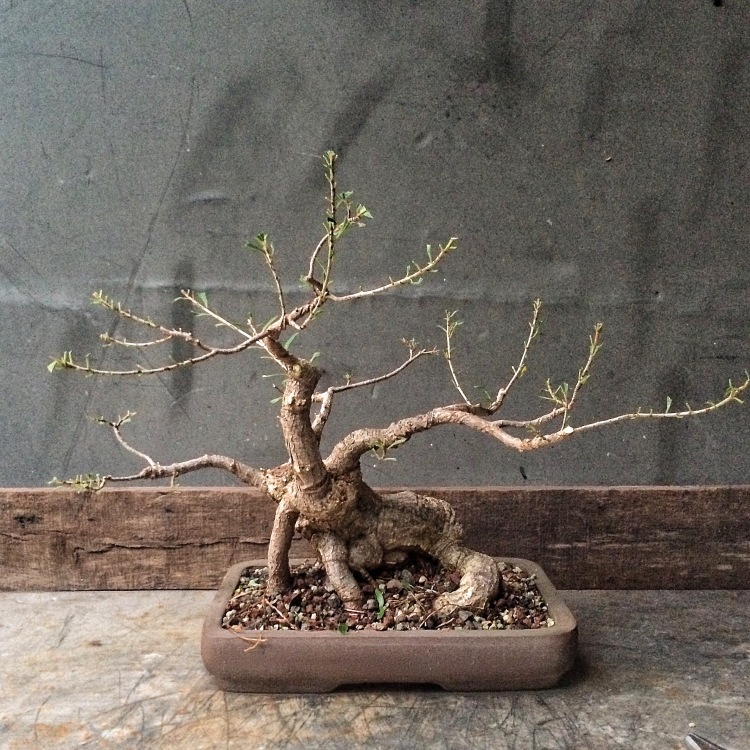 Let me address the, seemingly, controversial step of defoliation. I get asked all the time the questions “why”  “when” and “how”. So, let me answer.

Why: 1) It helps get more sun to the bare branches and, therefore helps in ramification. 2) It lets me see the structure better 3) It is easier to wire without the leaves and  4) The leaves grow back smaller

When: On tropical trees: when they are growing, which, if you give them adequate heat, light and fertilizer, is all the time. If you are up North overwintering them, you can push the tree by supplying a grow light and a horticultural heating pad for the root zone. And fertilize the shit out of them. Then you can be like me here in Florida.

How: I usually leave the petiole (stem) of the leaf intact and attached to the branch. The reason is because the new bud is at the base of the petiole and if you rip the whole leaf off, you could accidentally rip that new bud, delaying the regrowth process.

All this should only be done to healthy trees. Ok?  With that said, time for wire. 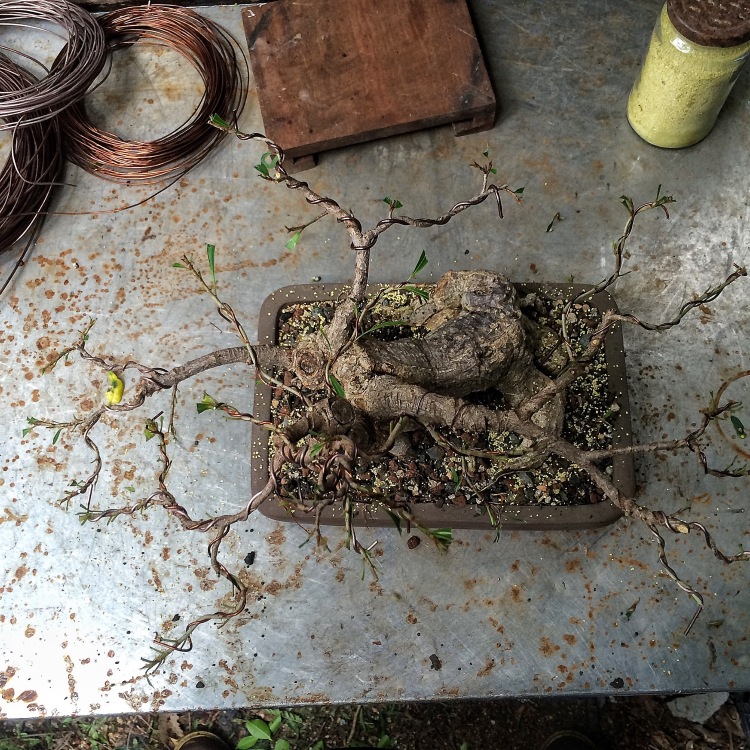 Next, is a tree I got from a good friend, Ronn. It hasn’t grown as much as I’d have liked in the last year and I think I know why.

I had cut it back pretty hard the last time I worked on it in order to get back budding and it has responded pretty well. 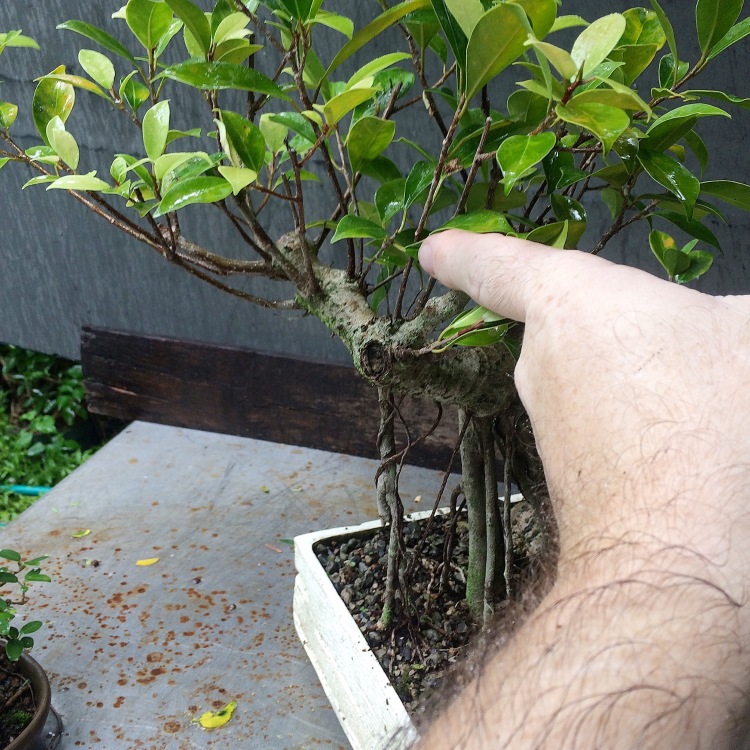 This stump is an example of the dreaded microcarpa dieback. 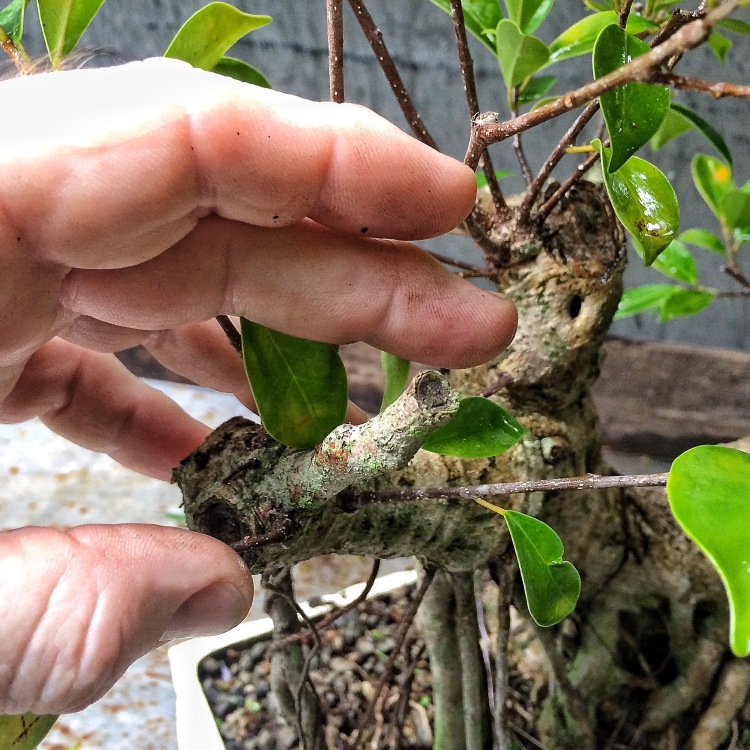 It did bud at the base of the stump at least…. 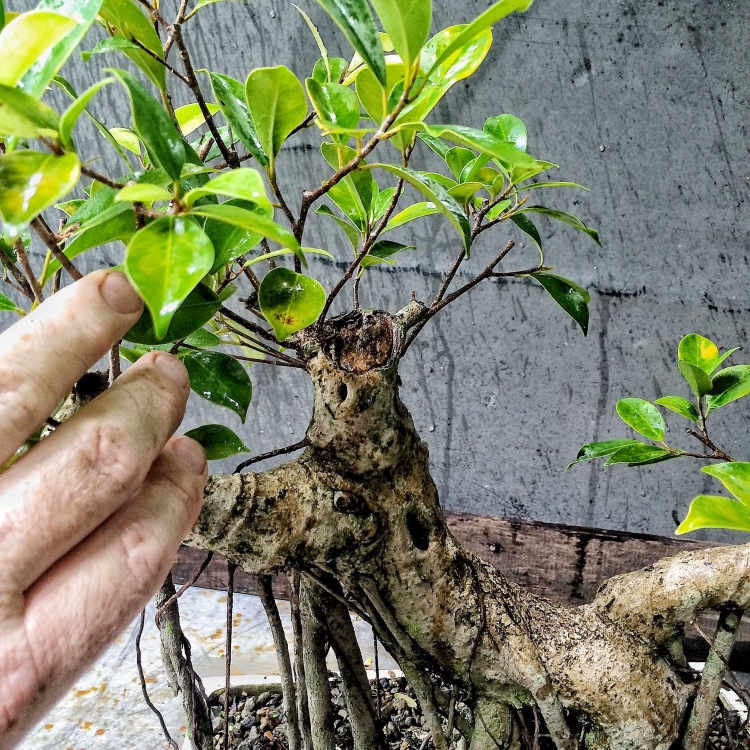 And defoliating….but I am leaving the terminal buds intact to help the branch elongate and thicken.

Now, to the reason I believe the tree didn’t grow all crazy-like and stuff: the soil.

This was an experimental mix containing diatomaceous earth, expanded shale and sifted pine bark. I think it compacted and didn’t have enough airspace and water flow.

Here are the roots…. 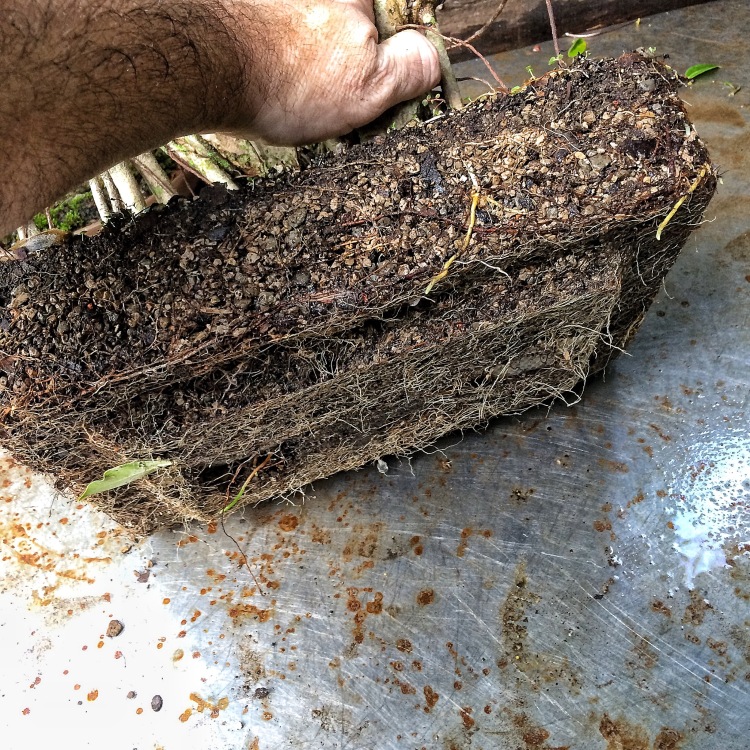 Not too bad. Not really filling the pot either.

Using a trusty metal chopstick (I break the wooden ones) I rake out the roots…..

…and discover that the root mass is dry in the middle.

Hmmm…….I think I’ll not be using this mix again. Like I said, it compacted itself and clogged the air spaces. And just in case, I’m going to use a different pot too. 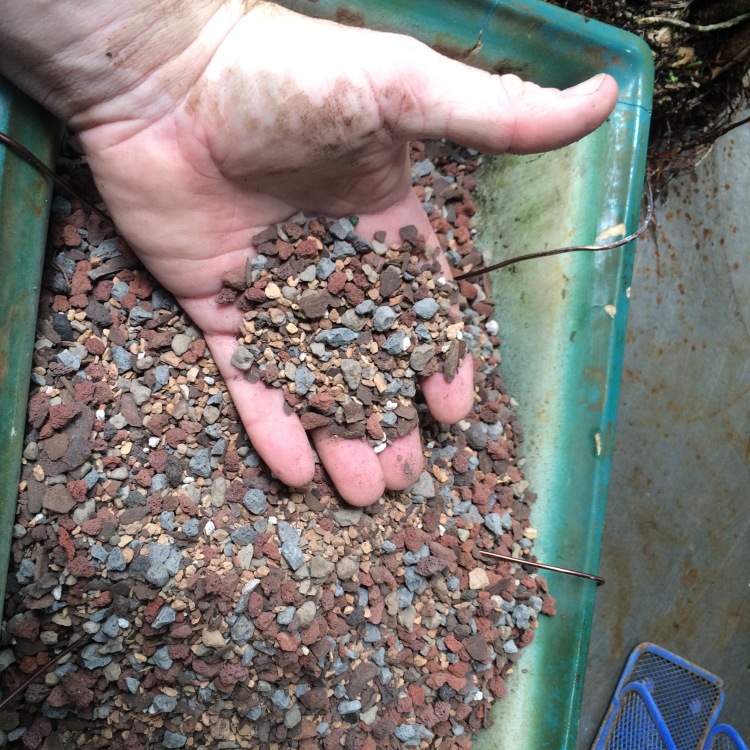 I can just feel the roots reaching into the new soil, rejoicing in their new home.

How do I see this tree eventually? 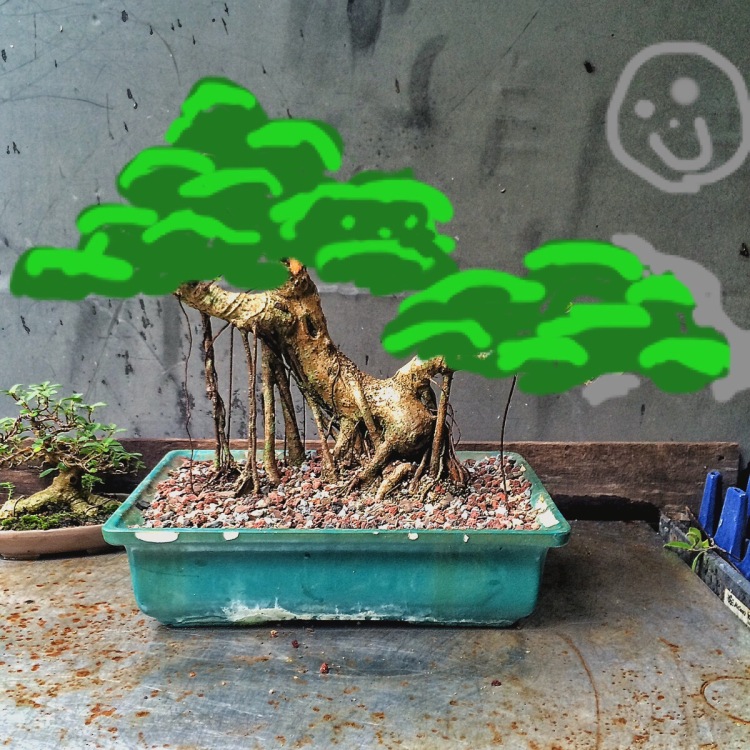 I don’t think it’s too far fetched to think I could have something resembling this by the end of fall. We shall see. Next tree is the Burt Davyii.

I don’t really believe that this ficus really likes Florida much. It’s too humid here and the Burt kinda likes it a little dry, being from South Africa and all. I’ve only really seen one grower in all of Florida with a fantastic one, and she’s in Palm City, which is a weird kind of microclimate where it gets colder in the winter and stays drier than most of Florida. Maybe if I protected it from the incessant rainfall…….

Remove the old wire, repot and prune. At the same time, my daughter will be defoliating the last ficus for me.

She doesn’t like her picture taken. Shhhhhh, don’t tell her.

I get to work. 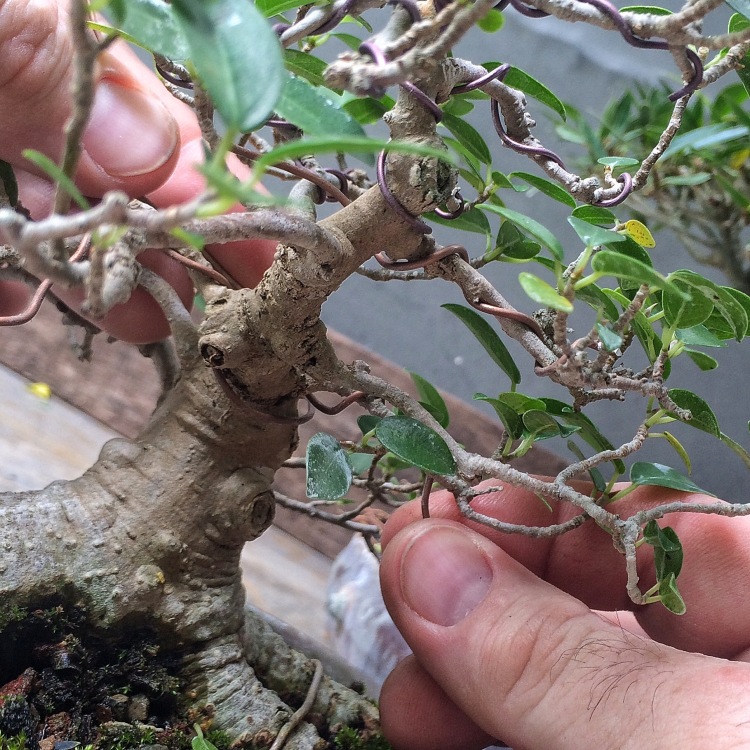 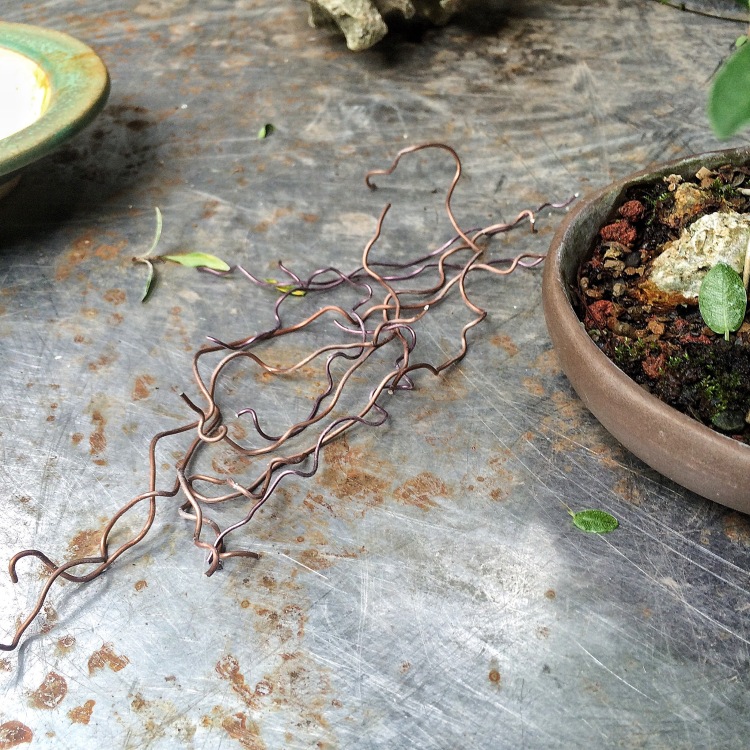 It’s amazing how these trees can survive with very few roots. 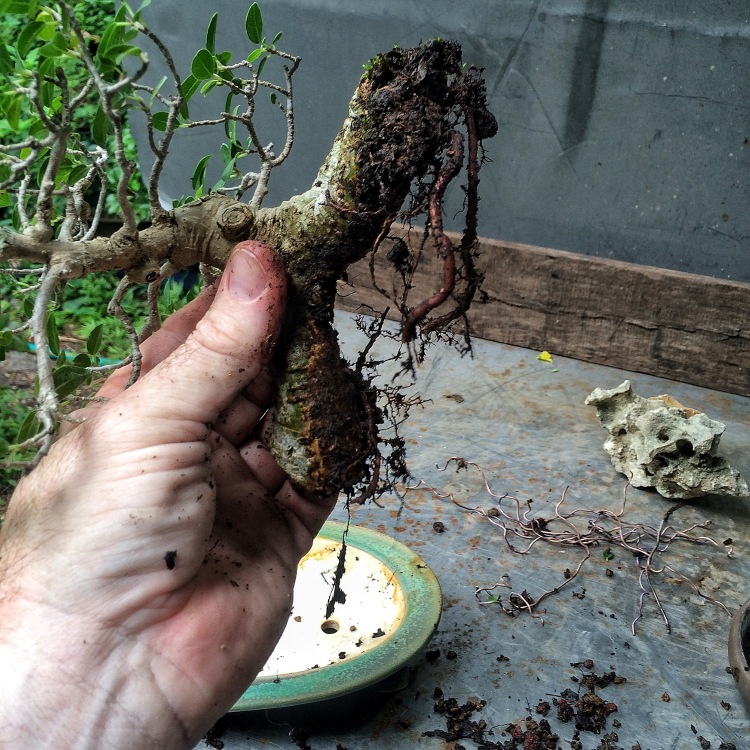 Being constantly wet, the tree didn’t need to grow that many. And since the roots didn’t grow, the top didn’t grow. 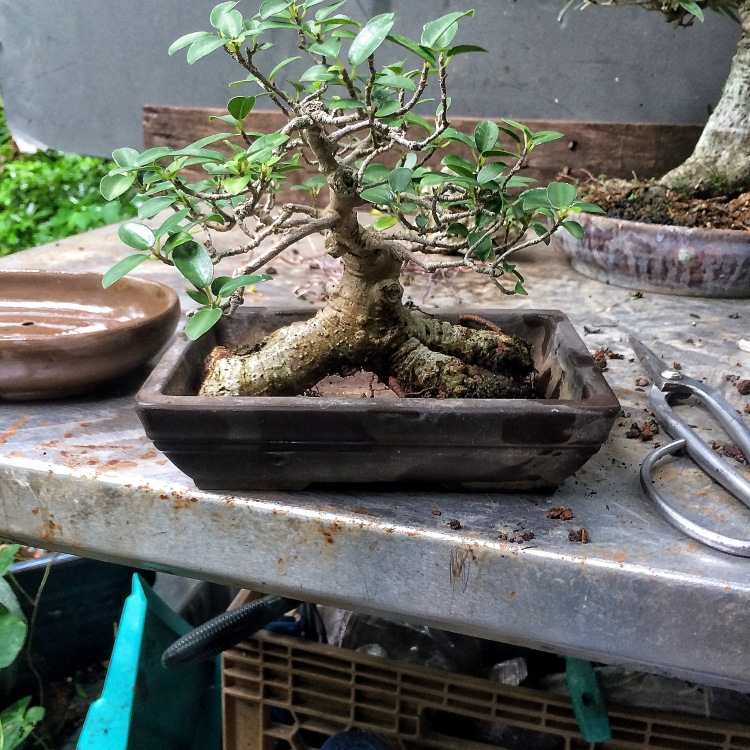 Some pruning and wire.

And let’s see about my daughters progress…..

Ah, she’s made a mess and when it’s time to clean it up……bam, she vanishes. Sigh….children.

That’s a sweet nebari. Oh, look there! I found a lizard egg.

I’m changing the oval green pot out for this neat, handmade one that a local potter gave to me. 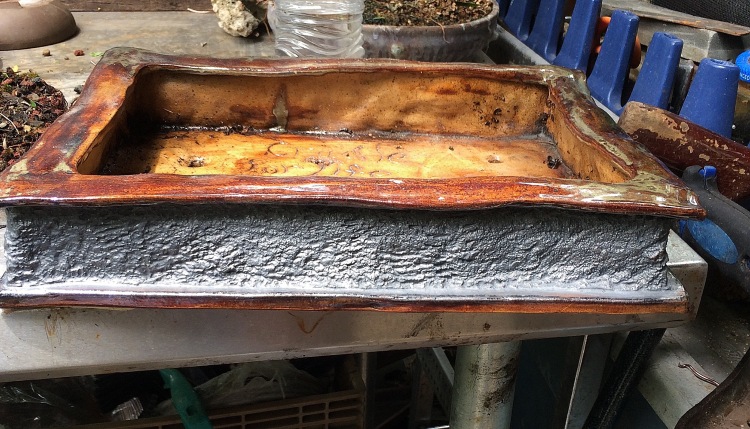 It’s an interesting pot, a little unconventional but I think it will work. 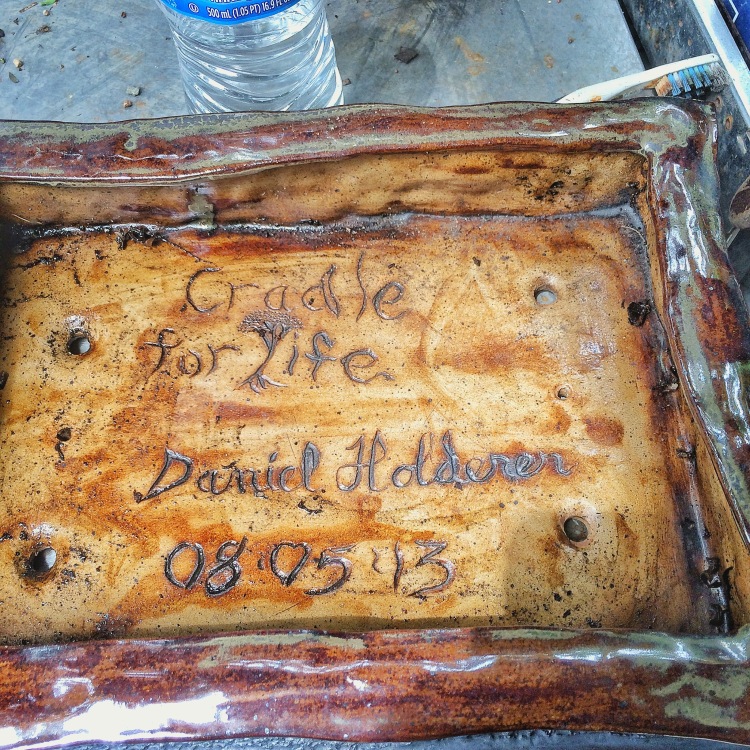 What do you think?

It fits well so far. Some soil and…..

Chicken, assorted pieces, I like wings myself, my wife likes breasts, the boys like legs and my daughter likes breasts.

Iokevto remove the skin off of the thighs and breasts because it holds so much fat and that causes flare ups on the grill. Plus, the marinade gets into the meat that way too. Speaking of which, let the chicken marinate 24 hours and grill until done, make sure you have a good burn on the outside, and baste with the leftover marinade as you grill.

Back to the tree:

Kinda looks like Alfalfa (for you younger kids out there, there was an old show called Our Gang, or The Little Rascals, in which a character named Alfalfa, who fancied himself a ladies man, had an amazingly akward cow lick popping up on his head.

They did an updated movie a few years back. I don’t recommend it. Alfalfa’s real name was Carl Switzer and he had an interesting life, to say the least. You’ll have to look it up.  But I’ll always remember him like this:

How often we ascribe the characteristics of roles that actors play to their real personalities.

But I’m not gonna let my tree be called Alfalfa. A tip trim and one wire. 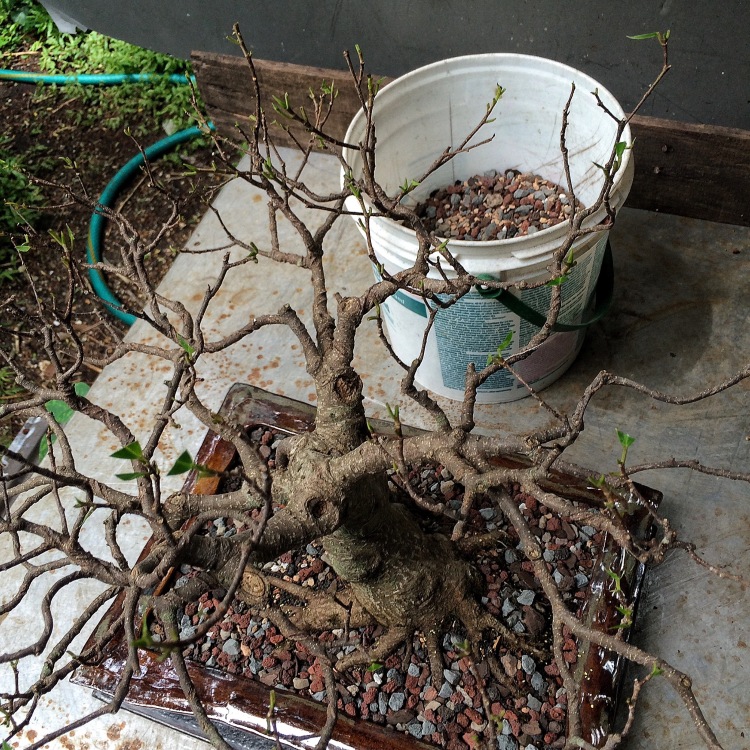 …all neat and pretty, then on with the show (sorry, that’s the Mickey Mouse Club..mixing my nostalgias).

So, until next time, (and to further muddy the mix): That’s all folks!