So, get this, here I go and win this tree in one of those bonsai auction pages on Facebook.

It was offered up by a casual acquaintance of mine, Seth. He’s this dude I know from Palm Bay. Which is funny because the tree was grown in Palm Bay and Palm Bay’s official motto is “A perfect place to grow!”  Yes, with the exclamation point and all. It’s a fun city, the most populous city in Brevard County Florida, but with the most roads in disrepair. It’s also first in strip malls that are situated miles from the endless subdivisions. Now that’s some cool demographic trivia…….

Sorry, it must be the birch beer talking, I know the above is  not very interesting or inspired (never mind inspiring) writing. 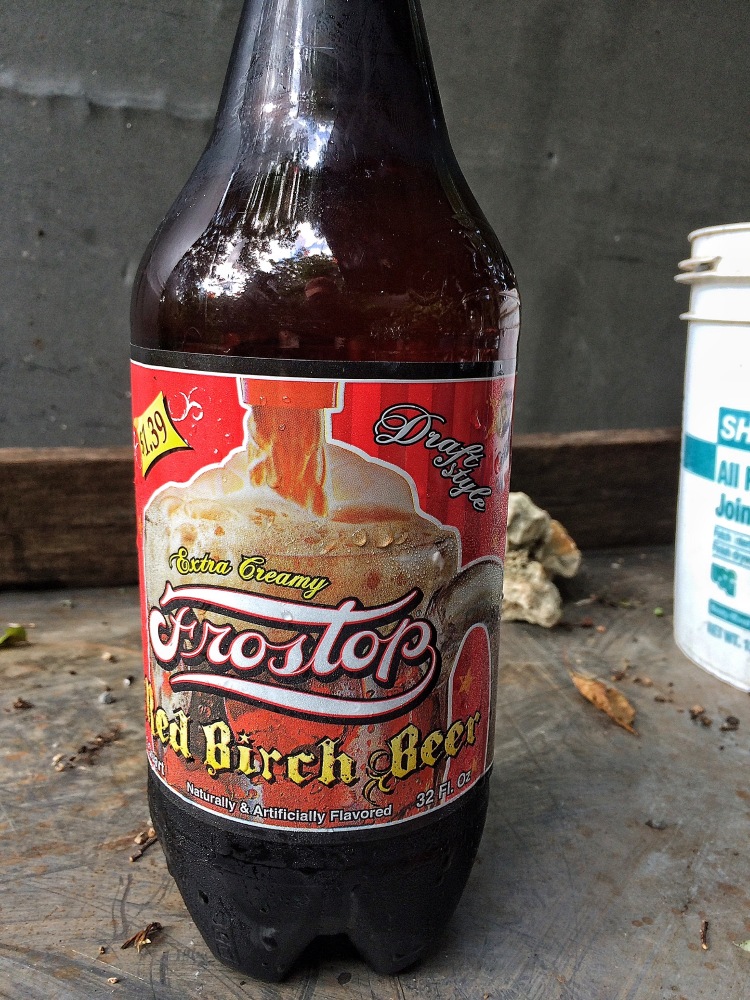 You see, I got this fortune the other day… 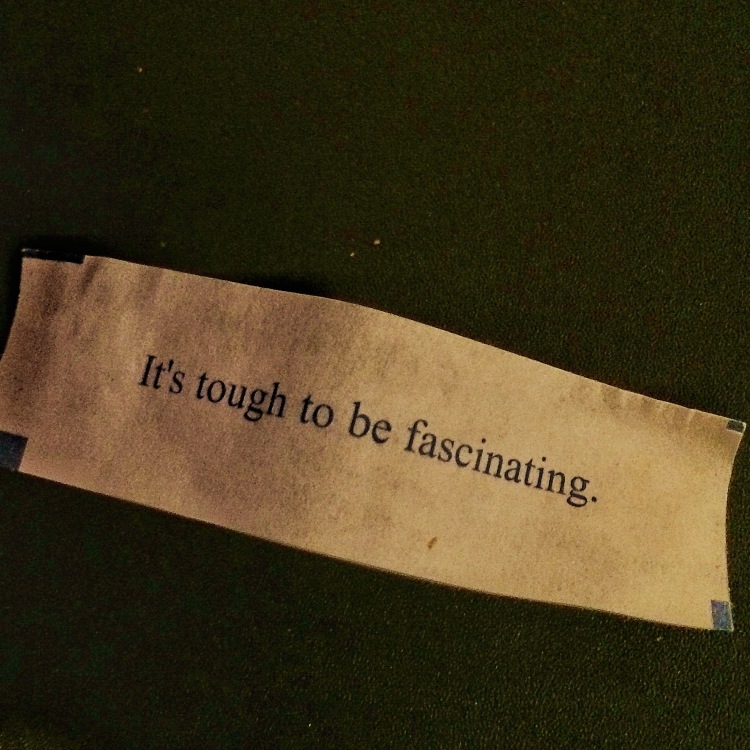 …..and I feel I’m trying too hard. To be fascinating.  I even spent fifteen minutes today trying to get the perfect selfie for my new MySpace profile pic. 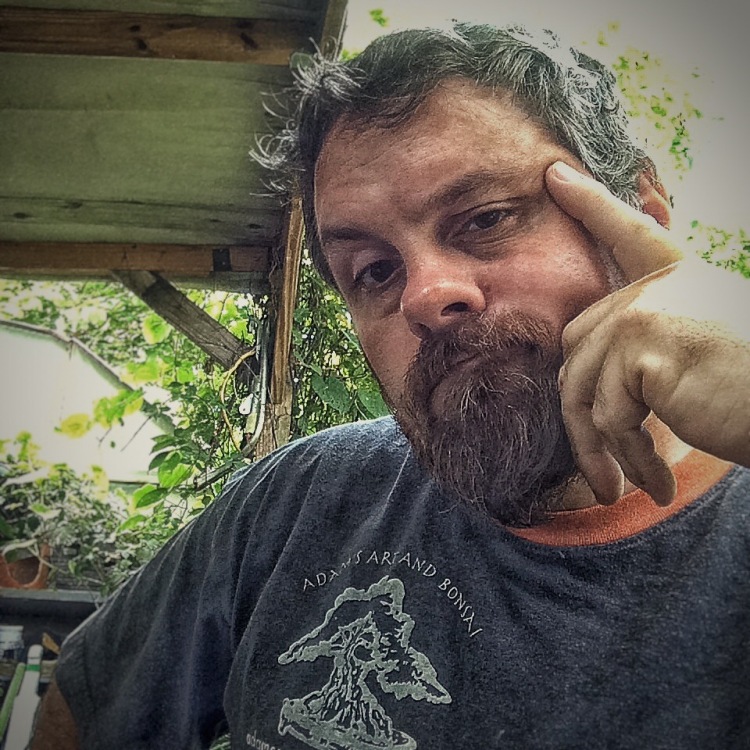 I think it turned out spiffy. What do you think? I recently got a new toupee and I’m a little self conscious of the fit.

Anyway, my mix tape is dropping next week and you can download it free on ITunes for the first 48 hours.

I started bidding on the tree mainly for this root spread. 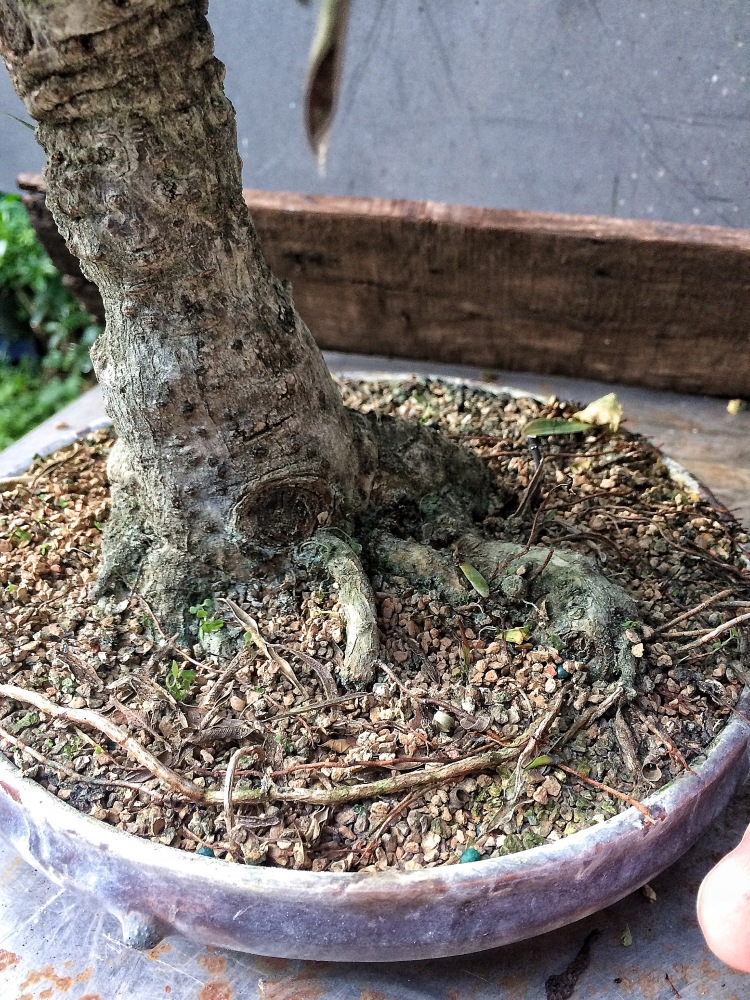 Little did I know that I would win. But I got caught up in the bidding war like that one lonely cougar at a Sadie Hawkins day auction trying to win the high school quarterback for a day of annual labor. If you know what I mean.

Time to tame the bush, but that’s later, first, I need to prune my tree, and wire and repot. I don’t even know why I mentioned anything about a bush….maybe it’s the birch beer talking again. Or a repressed high school mammary, uh…memory.

I got the first three branches trimmed and I’ll stop there. You see, those nifty roots were, I believe, in the back of the tree. And that means when I turn the tree around to look at that fantastic nebari, the whole top is tilting backwards (it is a major design component that the top of the tree be leaning forward, as though it’s bowing to you, to trick the eye into believing that the tree is taller than it is).

I could just chop the whole top off and start over. But that’s just so played. I’ve been trying, of late, to work with what I have, just to challenge  myself a bit more. This is the part where the copper wire comes into play.

I’m ’bout to get serious, y’hear? Full blown bondage and what not. I’m going to use a looped wire and crank that top down. Copper wire works best for this. Aluminum stretches too much.

And put it underneath the copper wire to protect the bark.

Do the same on the bottom. 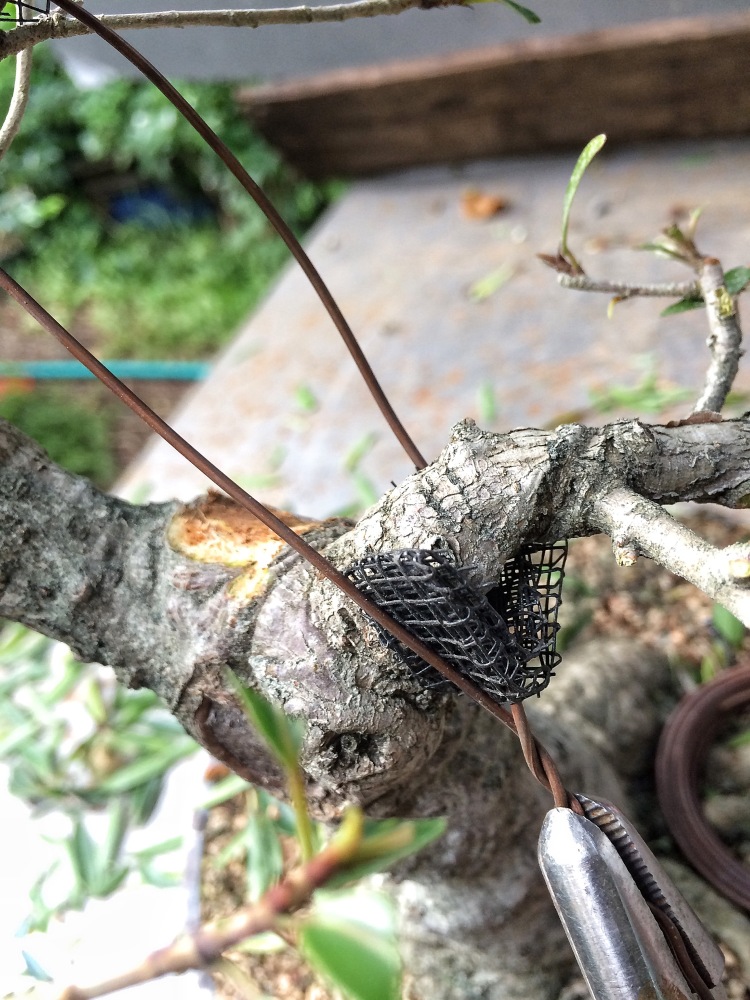 And, putting pressure on the trunk

Here’s the magic part. Using a span of wire as a lever.

Start to, ever so gently, twist the two wires.

Make sure you are watching the outside edge of the bend for signs of cracking as you bring the branch down. On a ficus you’ll see the bark begin to separate and the white sap begin to ooze. Don’t worry about that, a little bark separation is good because it’s the healing of a branch, after it’s been bent, that sets it in place. 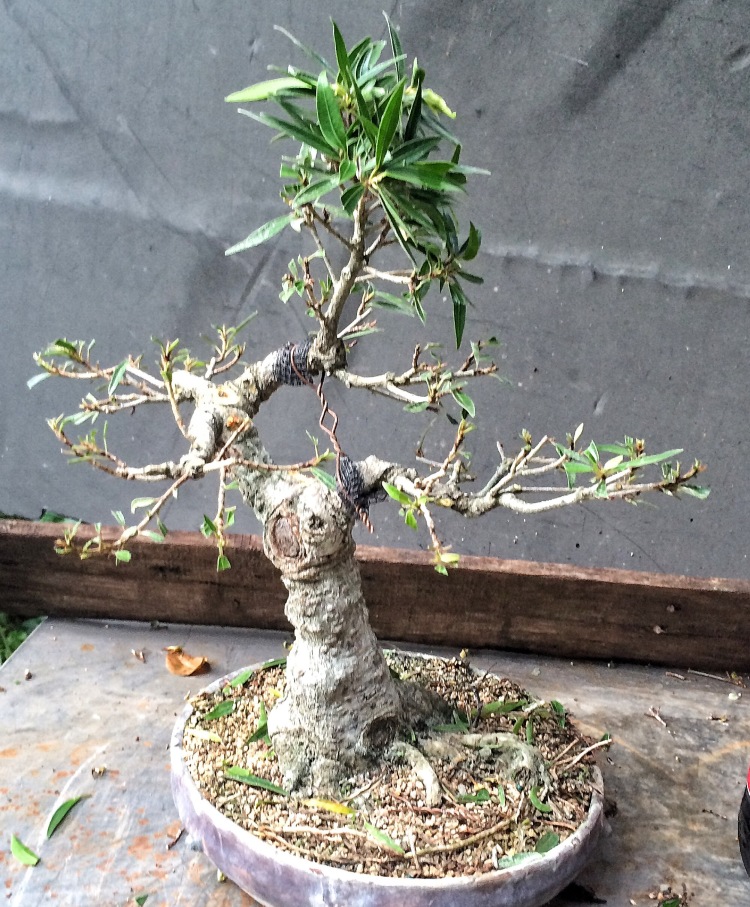 The reason for using a guy wire instead of just regular wiring technique is that a branch may be too short or too heavy to really bend easily with just wire.

Now that I have it in position, I can choose the branching on top and begin wiring the rest of the tree. 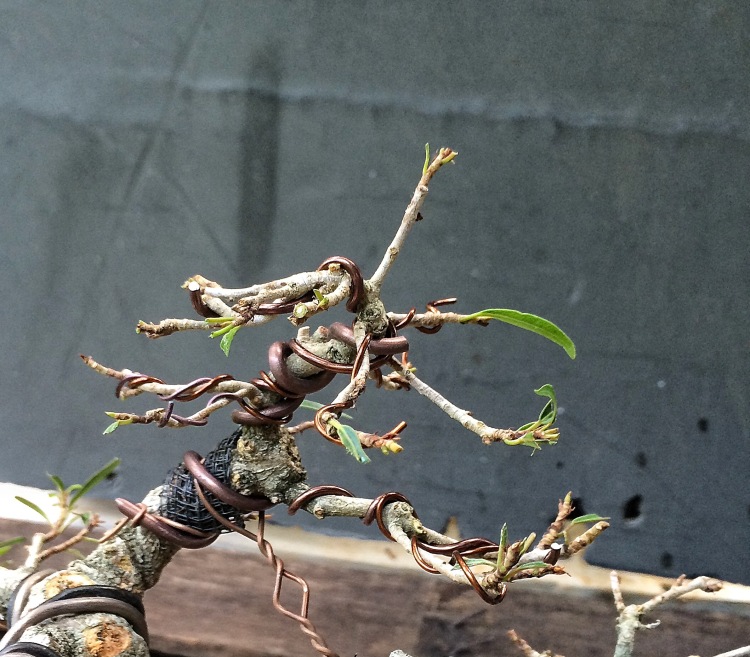 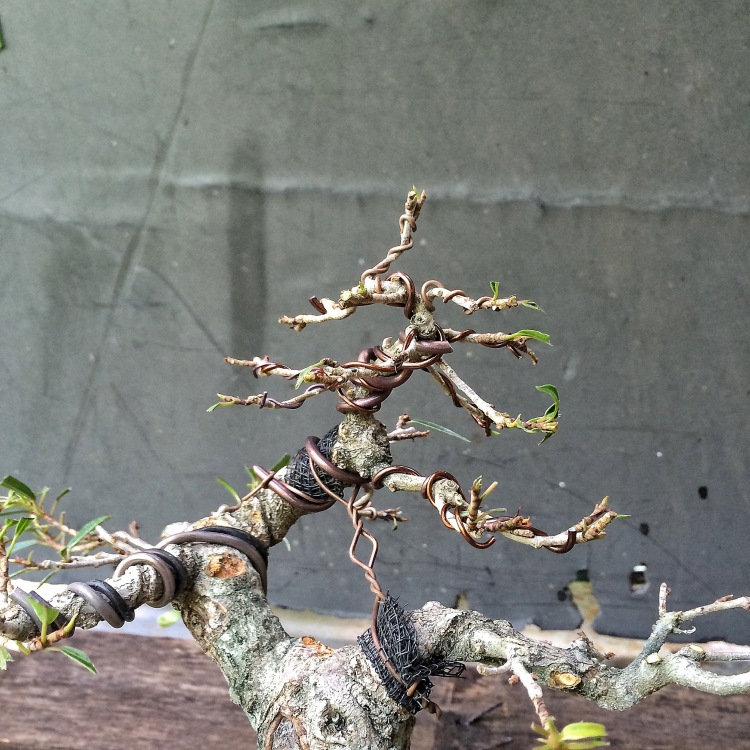 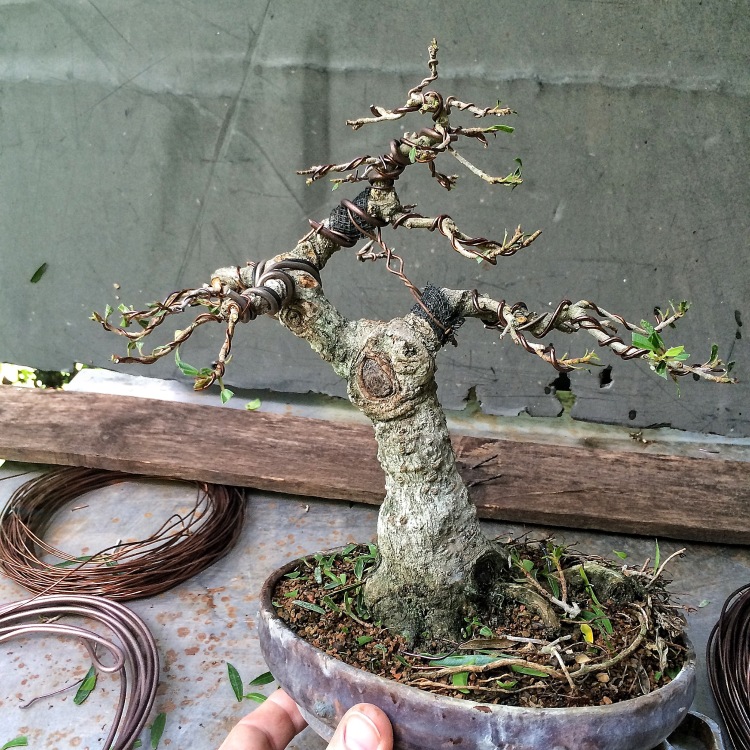 There we go. Now there are two things I must point out. First, can you see the sad koala bear?

And, unfortunately, there’s a bit of inverse/reverse/obverse taper in the same place.

Sorry to the sad koala, but I must take a knife to his cranium. 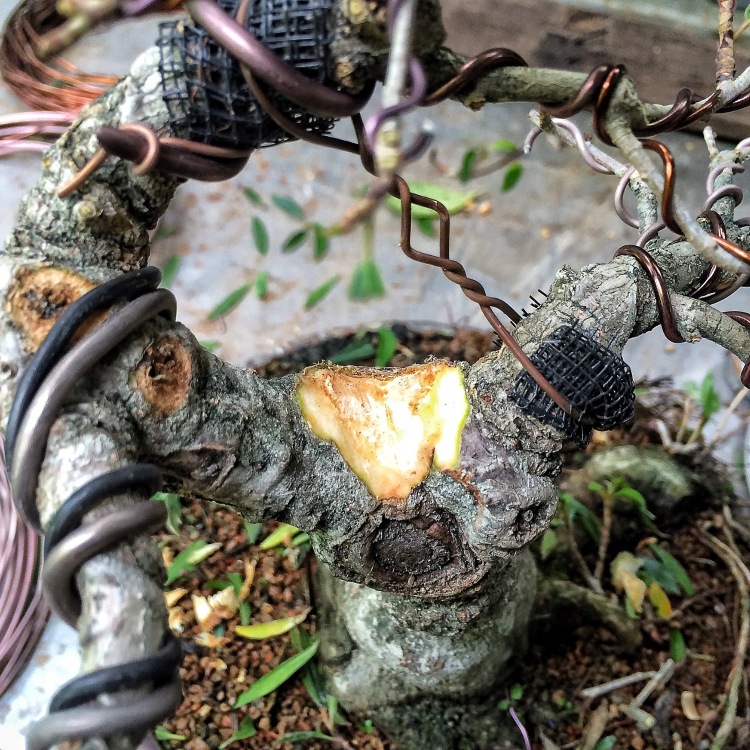 And now the repot.

Do you see the green buildup? It’s a combo of calcium/lime from the Palm Bay water and that green radioactive fertilized that my casual acquaintance Seth uses. A toothbrush (this time I’m using one I stole from Seth’s GF, Angela, when I was last there in April) 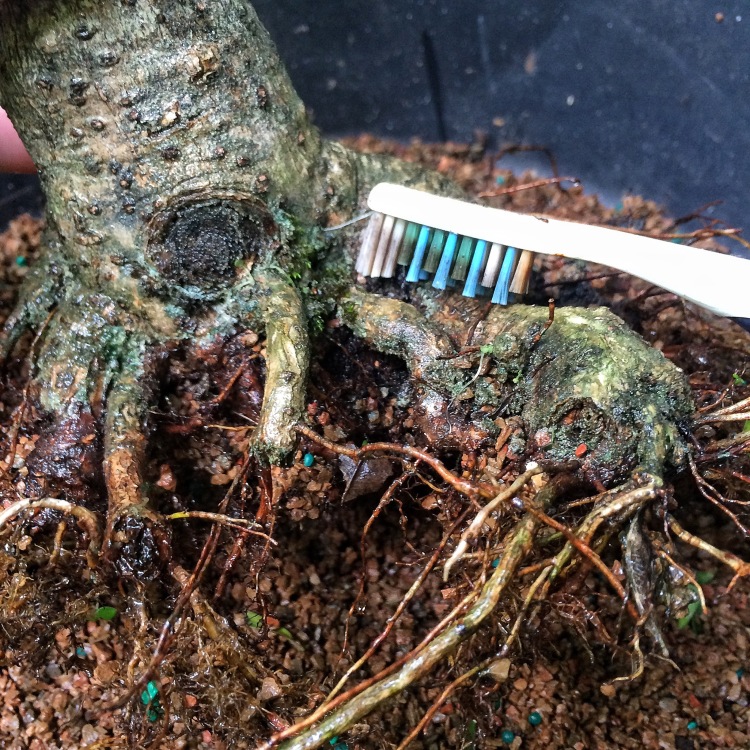 There, cleaner than a Quaker’s turkey neck.

I’m not going to use the pot it came in but you may have noticed it has some bad scale buildup on it.  Here’s how to get rid of it.

With it being a glazed pot, the cleanup is easier than with the pot I tried to clean a few posts ago. All I need is a green scotch brite pad, water…

…and a little elbow grease. 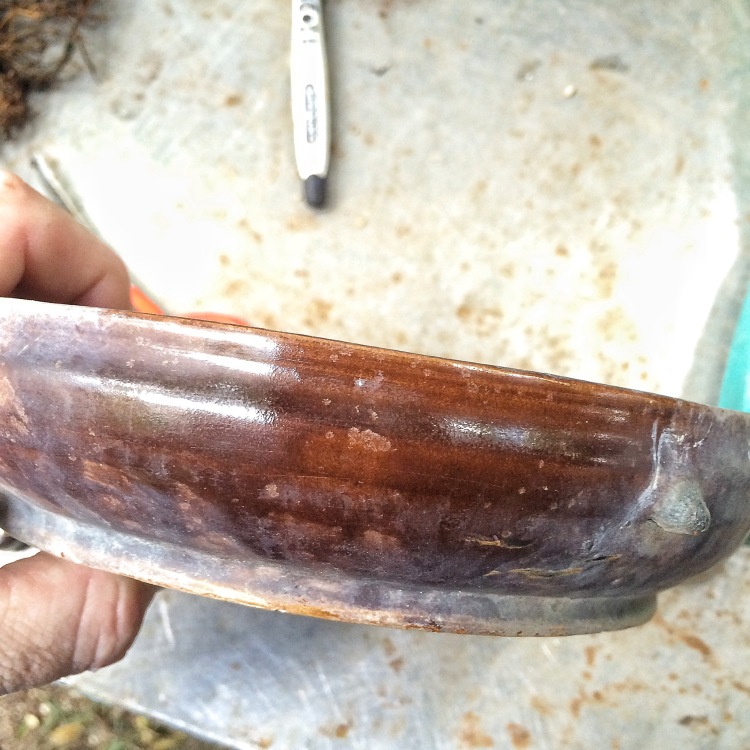 Here’s the pot I am using.

I love the glaze on it. I can’t remember the name, it’s something like glamdring or silmarilion, but it’s full of blues and browns with star-like points of white. It’s like looking into space and contemplating the infinite vastness of the universe.

I’m often asked why I use such heavy wire to tie my trees into the pot and why I don’t try to hide it better. 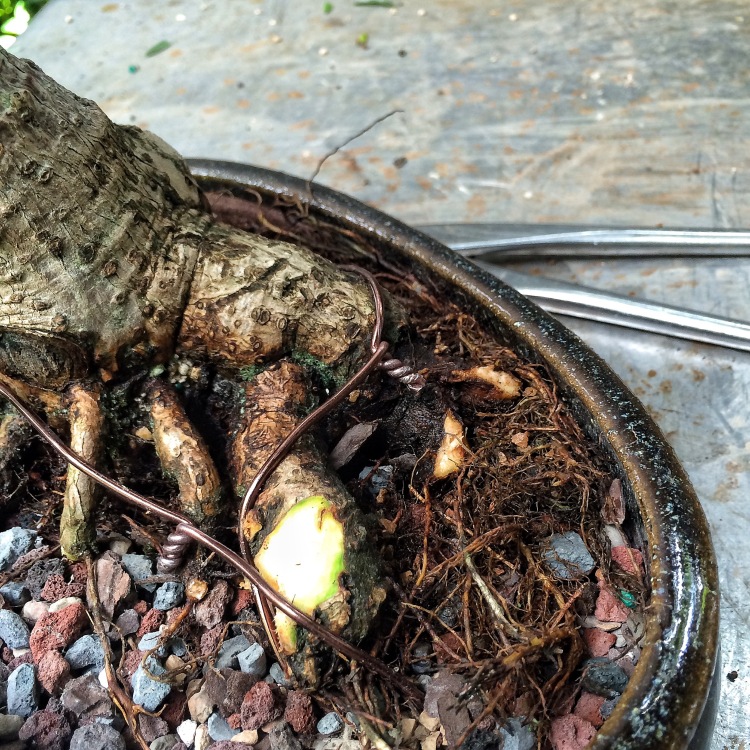 Heavy wire holds the tree easier and it doesn’t stretch when I tighten it down. And I’d rather my tree not fall out of the pot (I have four kids and cats, you see..) and the health of the tree is more important (the stronger the wire, the less the tree moves, the better the root growth) than the aesthetic of the tie-down wire. And this is cool to do when you want to shock the crowd in a demo: 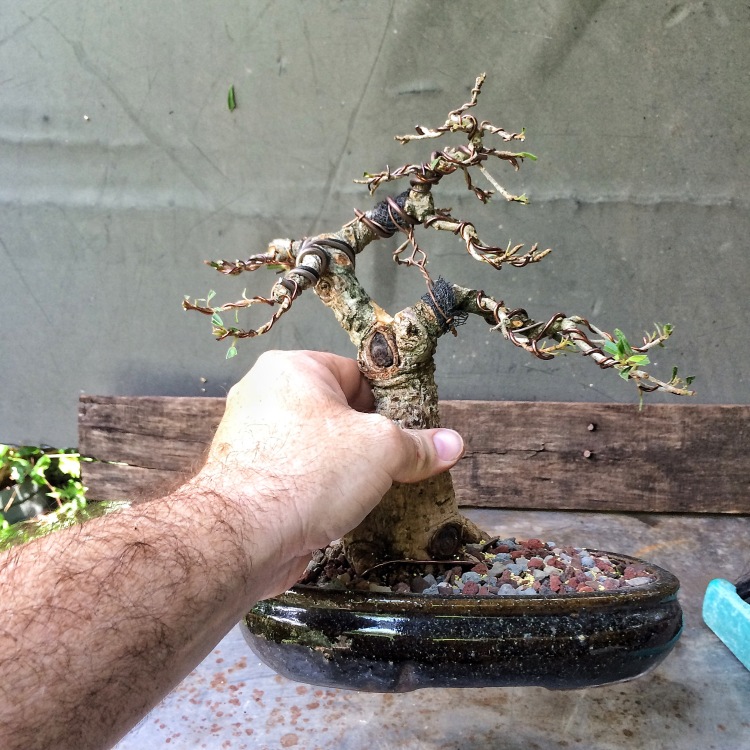 And that is all.

I think I’m seeing more of a sad alien creature than a koala bear now. And that makes my infinite space glazed pot all the better in combo with the tree.

The styling is a little unconventional  but I think it’s consistent with itself. It sorta grows on you the more you look at it too. Or you just start to feel sorry for the poor, sad alien whose stuck on earth (on my bonsai bench) staring into the abyss of the Orlando night sky. It brings a tear to one’s eye.

Next post, we visit bonsai royalty: a trip to the Queen Madame of the Florida buttonwoods, Mary Madison. And I bring back a rather odd tree from her nursery.