That’s a lot of bush.

Just by looking at it I’m getting tired.  I need a rest already. I’m getting too old to be able to handle a bush like that, really. 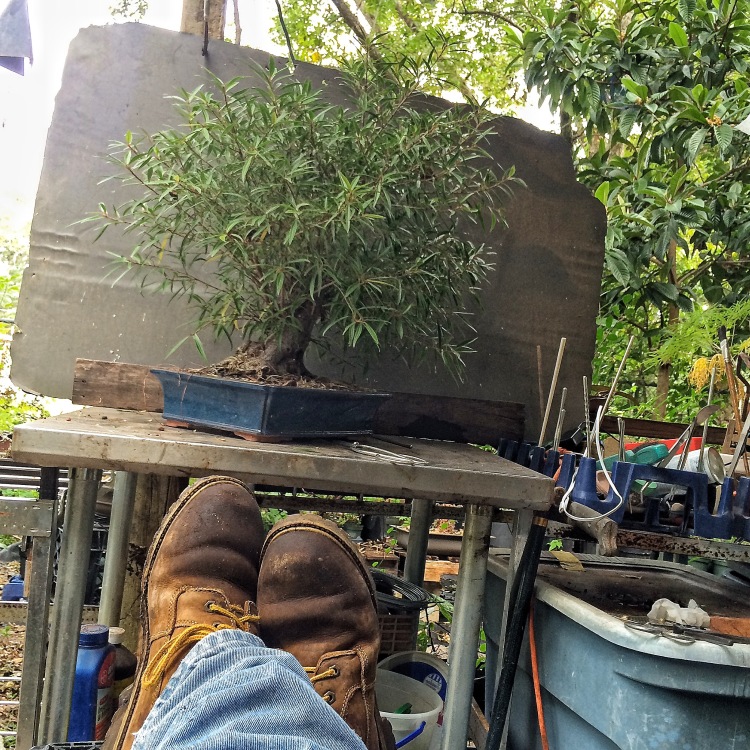 But, as the song says, “I’m not as good as I once was, but I’m good, once, as I ever was”.  I’ll get to work after I finish this cold beverage. Ahhhh, cold, citrus flavored, green tea. Not a beer, mind you, but it is only 8:30 am. I better get pruning on this spectacularly full Willow leaf ficus. 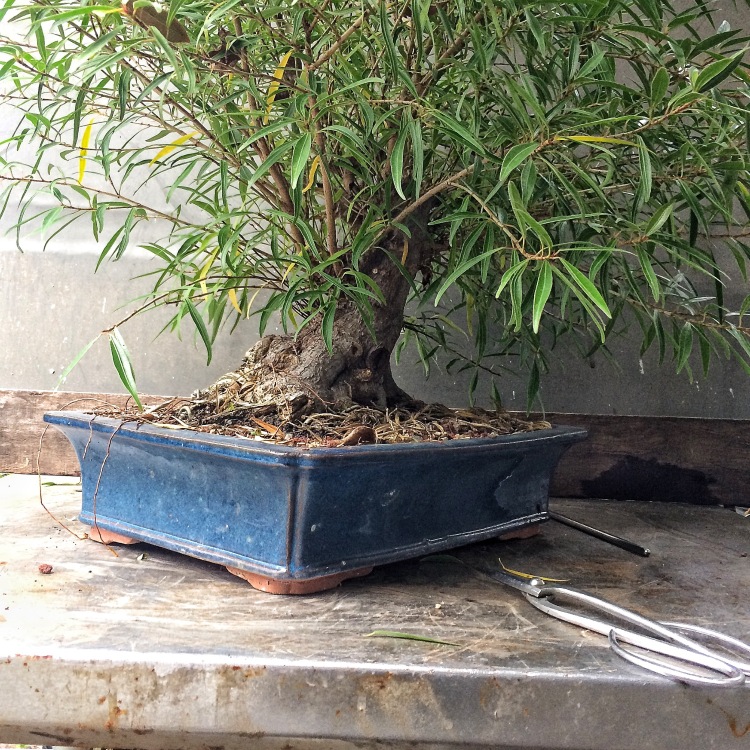 You have seen this tree before. It involved a trunk chop I believe.  I just can’t find the link. Sorry. I have failed you, miserably,  as the curator of my own work (I seriously need a manager. Someone to tell me where to go, to talk to venues, clubs and promoters for me. Most importantly, to deal with enumeration and amenities. Any takers?) I suppose I should begin.  Oh, I’ll be working on this fat bottomed tree too. Another Willow leaf ficus.

It’s those kind of tree that make the rockin’ bonsai world go ’round. You’ll have to wait on it though, I have some waxing to do. Just on the bikini line.

Here’s some very typical growth on the Willow leaf.

This would be the second time I’ve thinned it out this year. 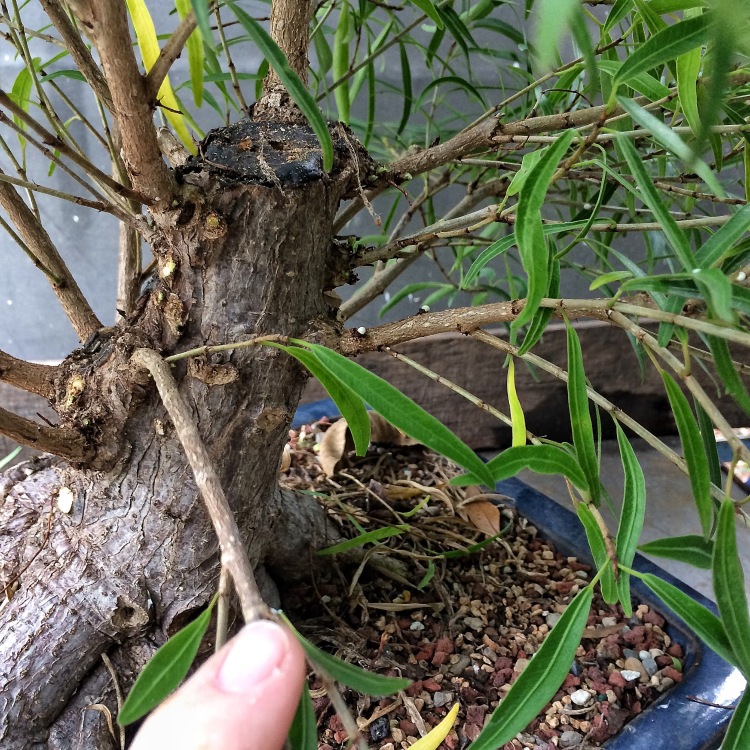 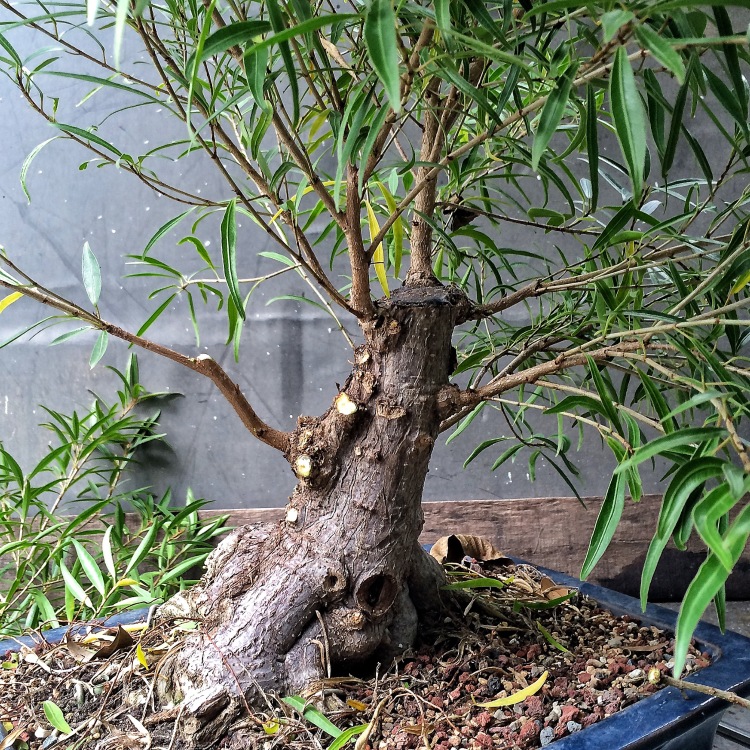 I’m getting there. If you remember the second post (I think there are two. It could be just me remembering the constant narrative running through my head as I work on bonsai)  I left two leaders on the tree (I think I did. That seems like something I’d do, I tend to be very non-hierarchical )

I’m going to go with the leader in the back this time. 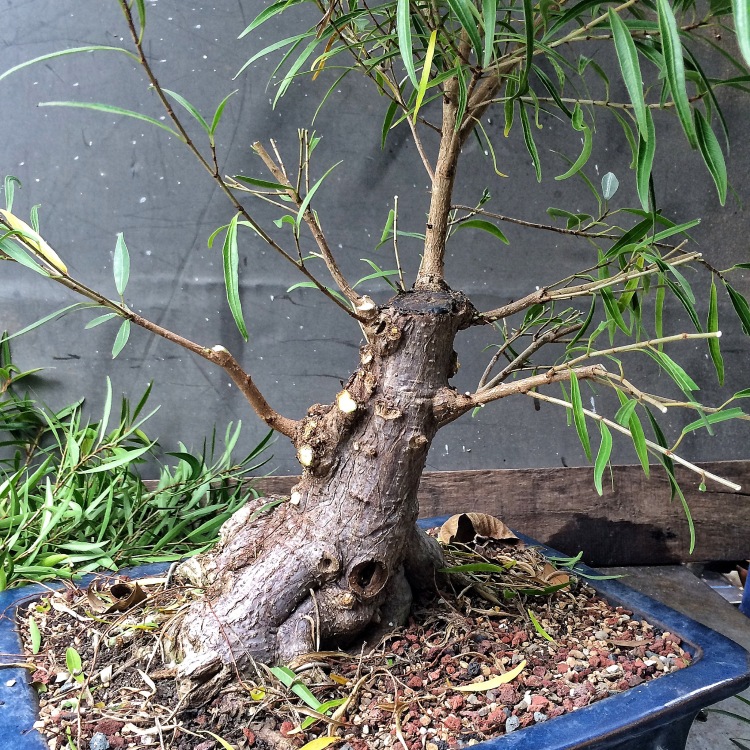 I do have some bug intrusion I need to address. 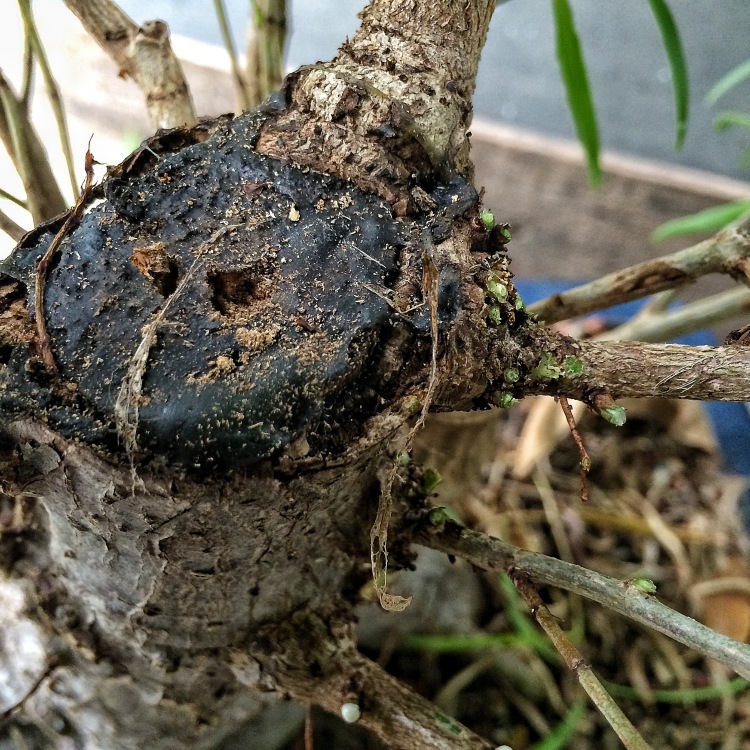 I think it’s just fire ants (as some of you might know, I’m originally from Massachusetts, where fire ants don’t roam. Only piss ants, which are a different story. Anyway, when I first got to Orlando, I kept hearing about these mean ants called “fahrrrr ants”. It took me weeks to finally understand. If they had just called them “fiyah ants” I might have understood before I stood in a mound and figured out why they are called fire ants. Although, truth be told, I do not have that Massachusetts accent. People have described it more like a Canadian one, some even say from Nova Scotia. Eh?). One thing this damage proves is that cut paste doesn’t really protect from fahrrr ants. 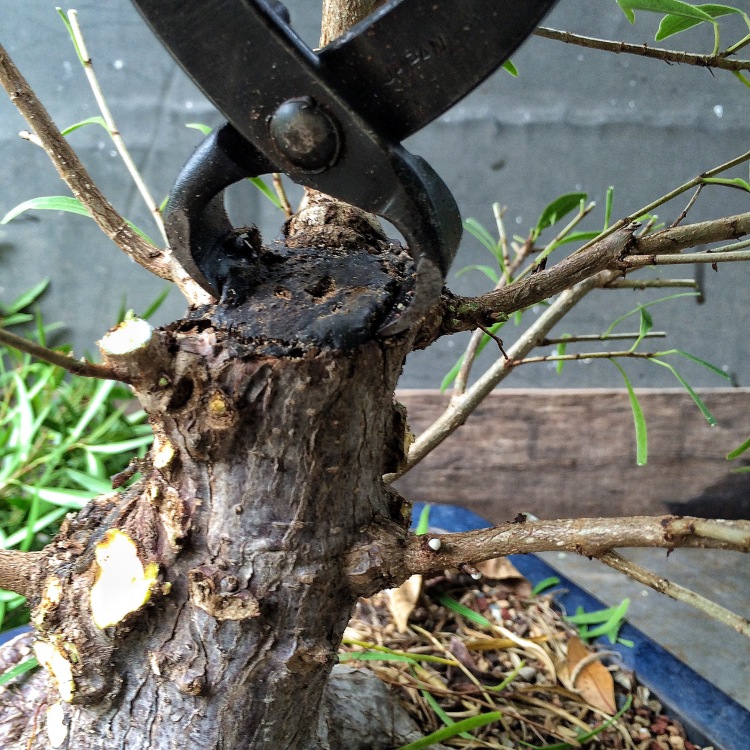 I need to re-dress the wound anyway. To deter the ants I spray some insecticidal soap on the chop area.

A little more off the top. 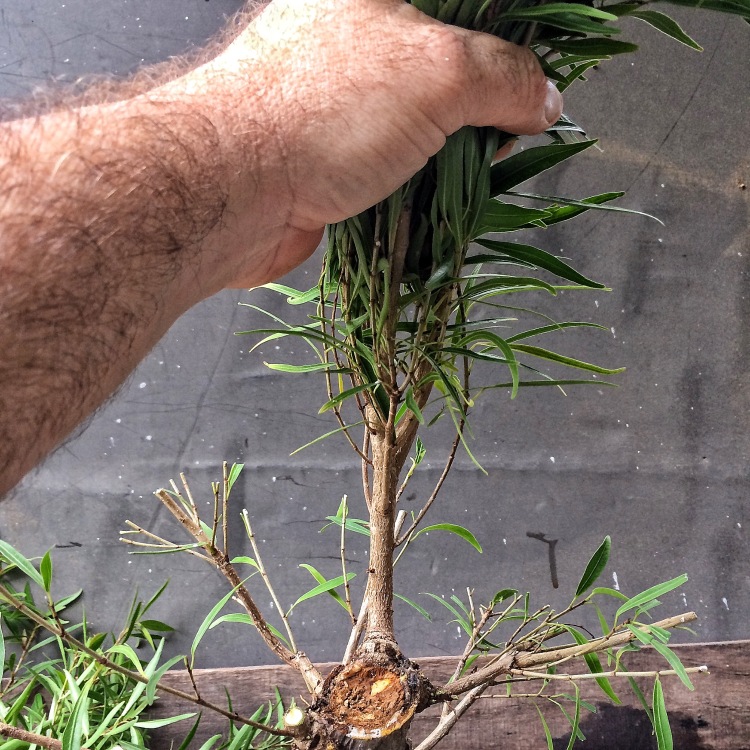 And now it’s time for some wahrr….whyah. Ahem, sorry.  Wire

I like to use two smaller wires on a branch, as opposed to one bigger wire, generally (specifically even), when I wire. 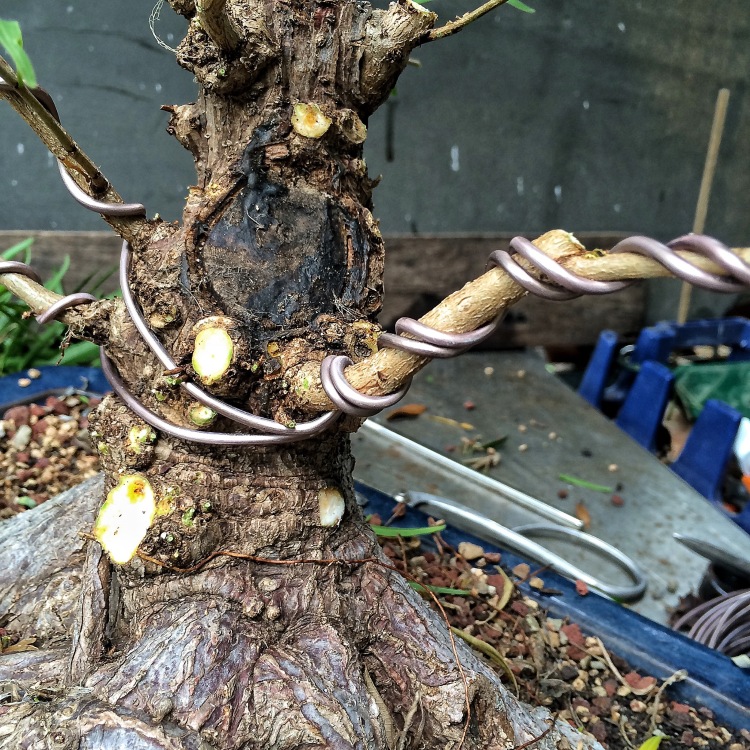 The traditional bonsai dogma calls for one big one (that’s what she said) because it’s “prettier”. But two wires provide for more support and less breakage when bending your branch. And it lets me anchor the wires mo’ betta from branch to branch. 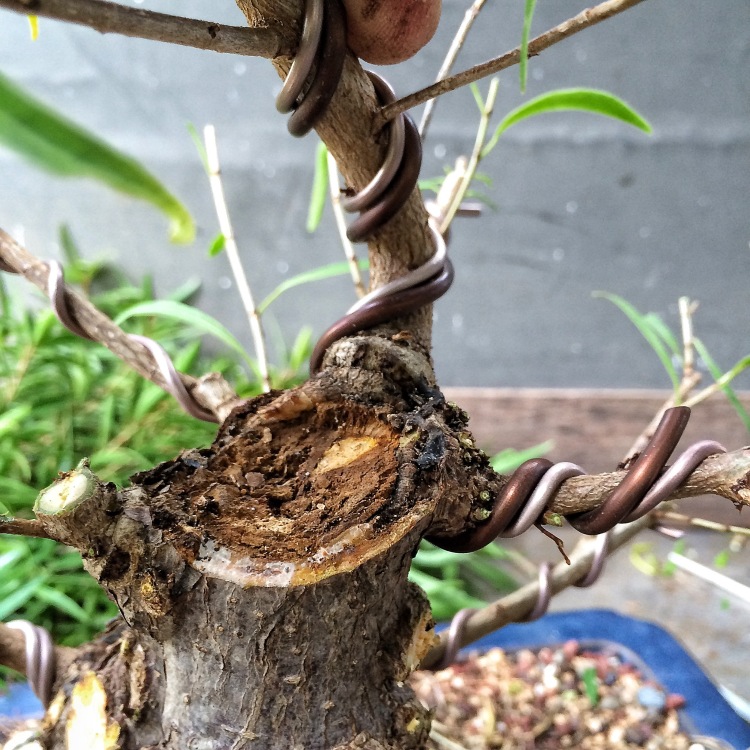 This is the first wiring of the tree, so we are using the brute force method and not much fine wiring. 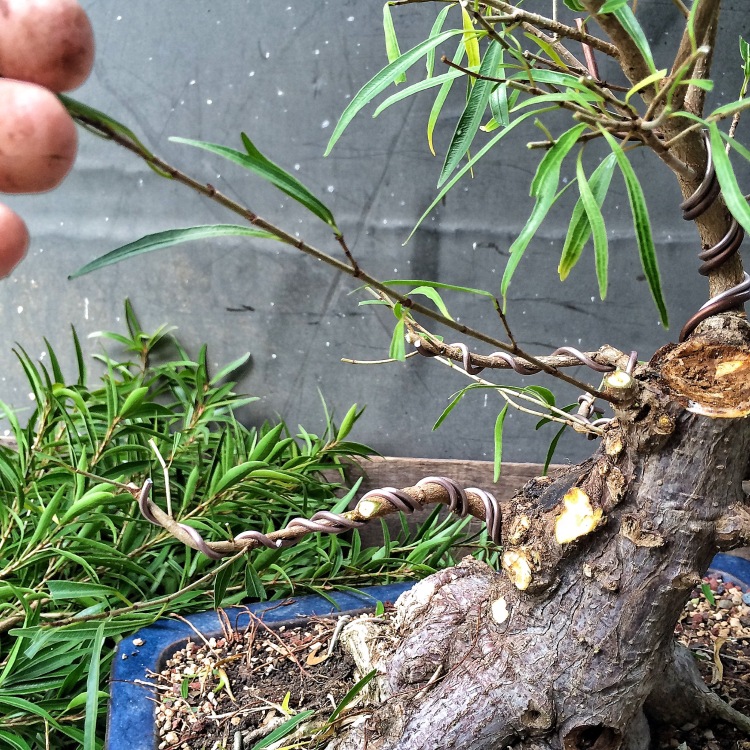 I could wire it and put curly cues in it. But is so thin, any movement I put into it will just be cut off later so, let it grow.

And, before I get the comments about this bar branching (I ward off your evil comments with the devil horns) I am aware of them and I’ll probably cut of the branch on the left. Not yet though. I’m still building the tree and I can, being in Florida and all, allow it to grow amd cut it off later. That branch took a just few months to grow. Or I might change the whole design and use it as the leader. Who know? What’s certain in life? Maybe an asteroid will fall on the earth and only that one branch, having been left on, could change the gravitational field of Florida and deflect the worst of the damage from my back yard and my trees. It could happen. Have you heard of the butterfly effect? The whole Jurassic Park franchise is based upon it, and chaos theory. Or at least it was until they came out with the whole “dinosaur whisperer” thing. Ridiculous.

Anyway, patience. This is about building a tree, growing the branches and all that.

And that’s all until next year, probably. I’m getting some good taper. It’s just a matter of filling in again and then building the branches.

Speaking of building a tree, this one’s trunk is the result of fusing smaller trees into a bigger ficus trunk with no taper. 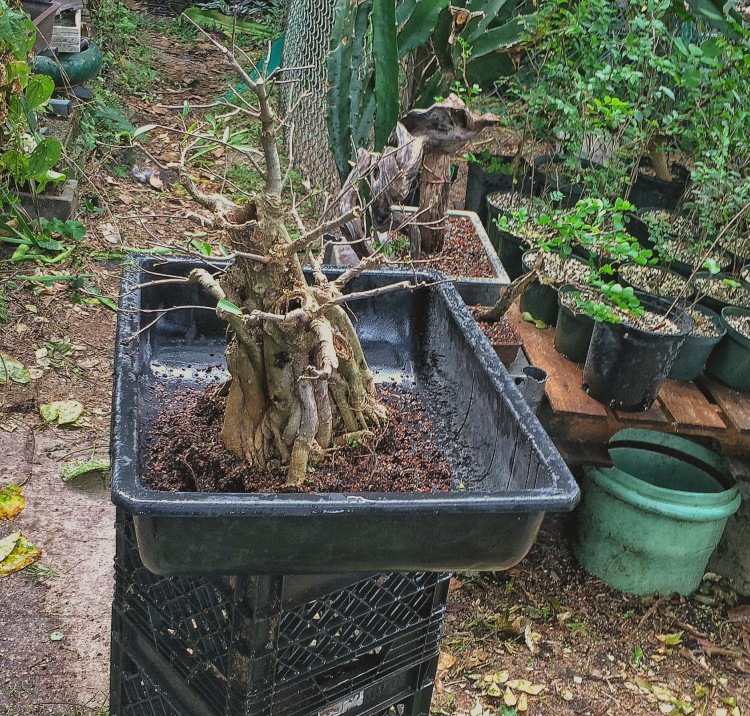 It was still a big trunk but, it’s bigger now.

It wasn’t me who did the fusing so I can only guess at the technique, but I’m sure it involved wrapping the smaller trees tightly around the bigger trunk with grafting tape or some such product.

You can see the rotten out tops of the fused trunks. 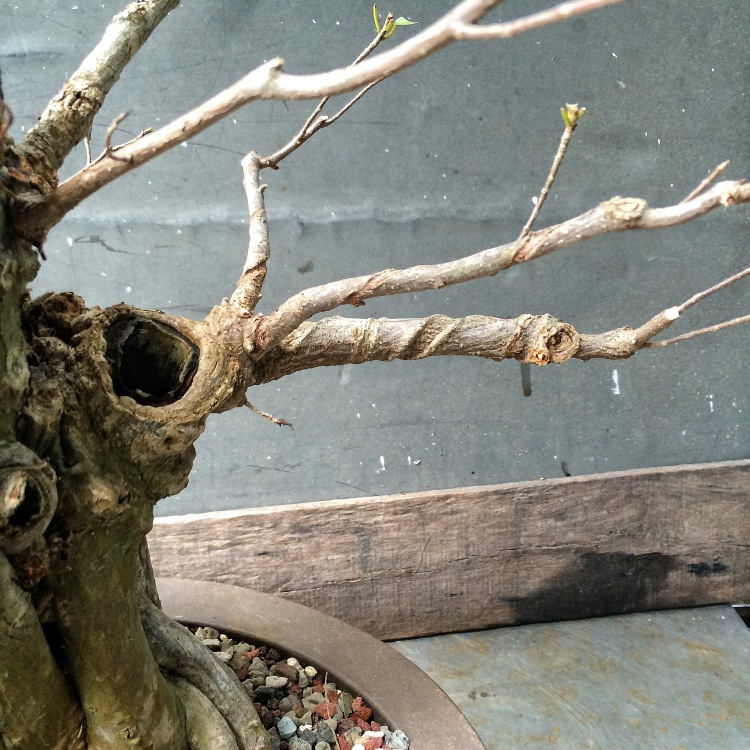 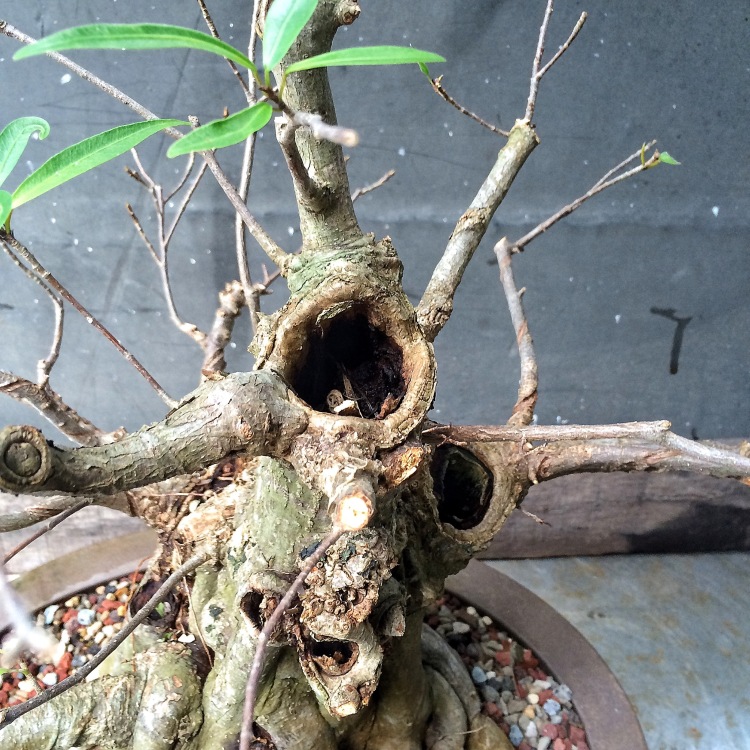 There’s not much that can be done about the holes now. I think it looks kinda cool myself. Gives it character.

I’ve had the tree for many years and I’ve not really done much to it except topiary trim it. Your seeing it after a hard prune that I did yesterday. And I see that there are some problems. These two branches are pretty straight. 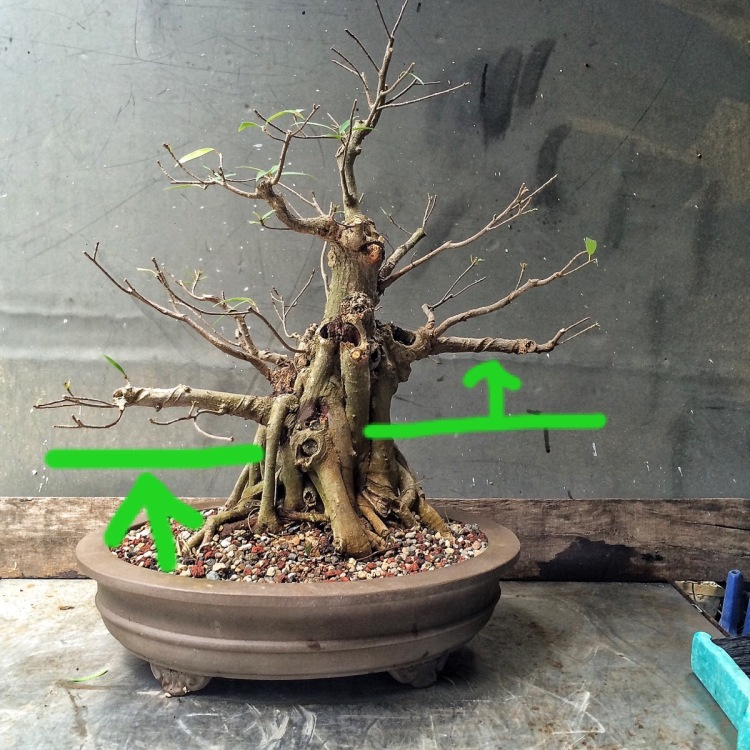 And they are both too old to bend and stay bent (like the phrase, “get bent, old man!”)

Let’s sit back and look at the tree, and I’ll show you an artist’s trick.

I call it the “thumb in your eye” maneuver.

It can be used to measure spaces, to help your eye focus (or unfocus, more precisely) to see the artwork in a general (let’s assume I mean specific there)  way. And it can be used to block out details you may not need.  Like, do I need this branch? 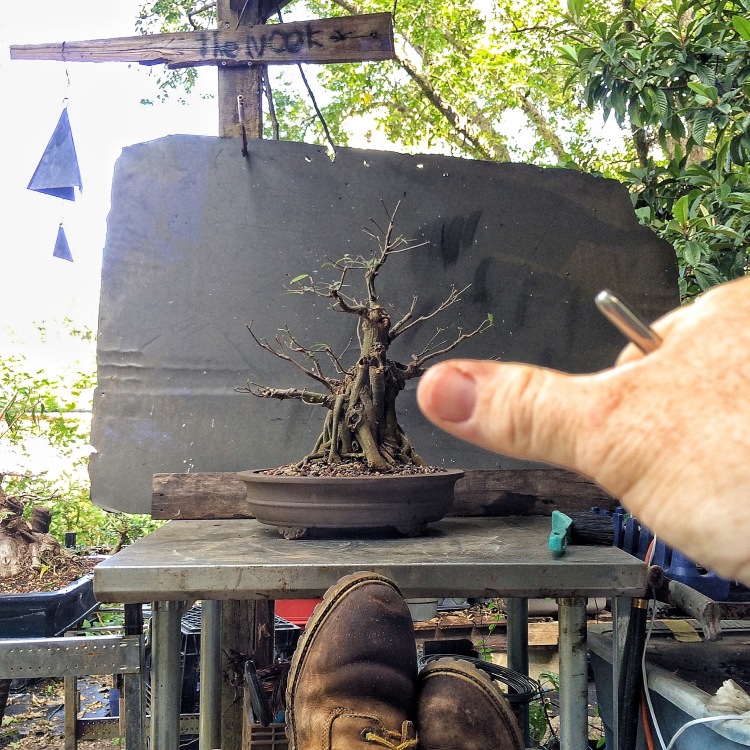 Probably not, actually. How about this one?

At the moment, I do. Is the tree too tall?

Yeah, most trees are, truth be told.

Ok, break out the scissors, time to prune. 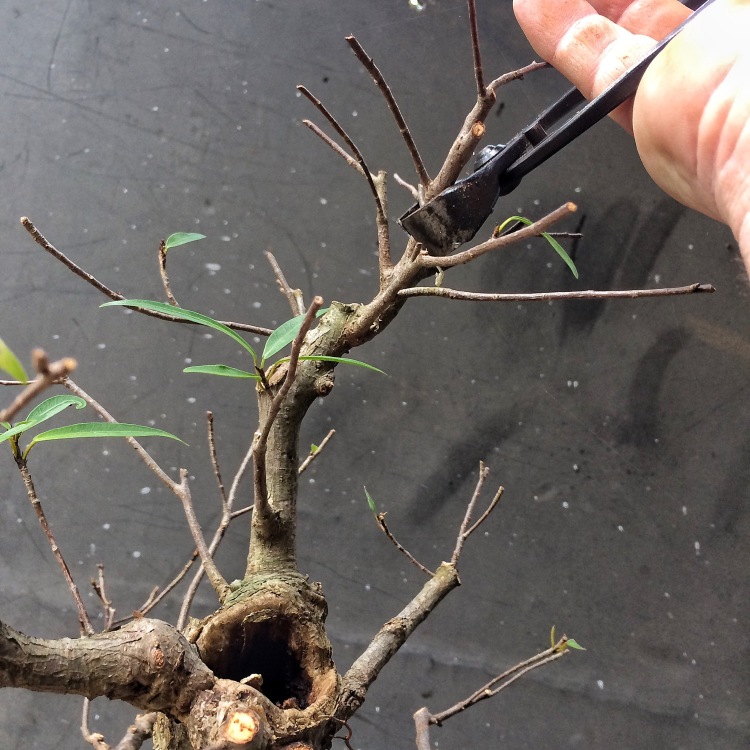 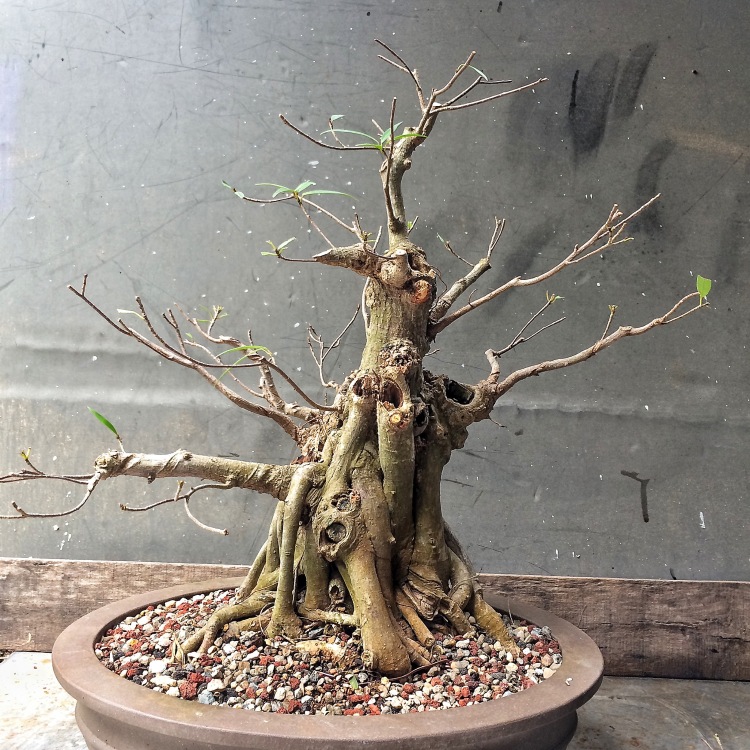 And a little wire.

I’m still not convinced about that first branch on the left.  It’s so straight, like a 1960’s NASA rocket scientist. Or Rob Kempinski. I had to explain the “bush joke” I told at the beginning of this post and he still didn’t get it. Or maybe he just didn’t think it was funny.

I thought it was knee slapping, belly jiggling, laugh out loud funny. But, then again, I think the movie “Weird Science” is modern Shakespeare.

Both the trees get fertilized (I know, it’s the end of October, aren’t you supposed to stop fertilizing? No! You need to push the tropicals through the winter by keeping them warm and giving them supplemental light even. How else will you catch up to us Florida people? Push your tropical, people, they love it. Now, your temperate trees need a rest. Give it to them.) and I should have some good stuff to work with in the spring.