Stumbling, sweating, staggering  through the saw palmetto brush, trying to reach that oak hammock, shade, the shade just might save me, I trip in a patch of sugar sand, landing face first. Sweat and dust in my mouth, up my nose, like powdered sugar, but not so sweet. I look like a refugee from the 80’s, powder stains on my nostrils and lapels.

That’s when I look up and see it, its upright stem and shiny green leaves nestle in the crook of a branch, but languid root tendrils hanging, it’s like an alien, a slow motion organism, spreading, reaching,  strangling that poor oak to death. But it’s not an alien. Not even naturalised. It’s a native of the Sunshine State, one of the only ficus from lá Florida. It is a strangler fig, slowly, inexorable reaching its roots towards the fine sand of the hammock. When it reaches ground…….poor oak. The mighty brought down by the degenerate power of the fig.

Well, that’s not how they all grow.  Some turn into trees without having to suffocate and cannabilize a fellow tree.  Today’s tree was one that germinated in the ground.

Collected by Erik Wigert on the Gulf Coast of Florida, acquired by me as enumeration for a demo at one of his open houses (there’s one coming up soon, November 7-8 check his website for details – WigertsBonsai.com -This year will feature Marc Noelander of the famous Noelander’s Trophy).  I’ll be there as an attendee this time, hope to see you.

Speaking of Wigert, since I got the tree from him, I thought it fitting that I’d use one of his tools, a battered concave cutter he asked me to fix. I had to reallign the cutting edges and resharpen it.

Don’t ask me why it’s painted white. Anyway, I’ll need to defoliate the tree (the binomial name is “ficus aurea”) so let me get started. 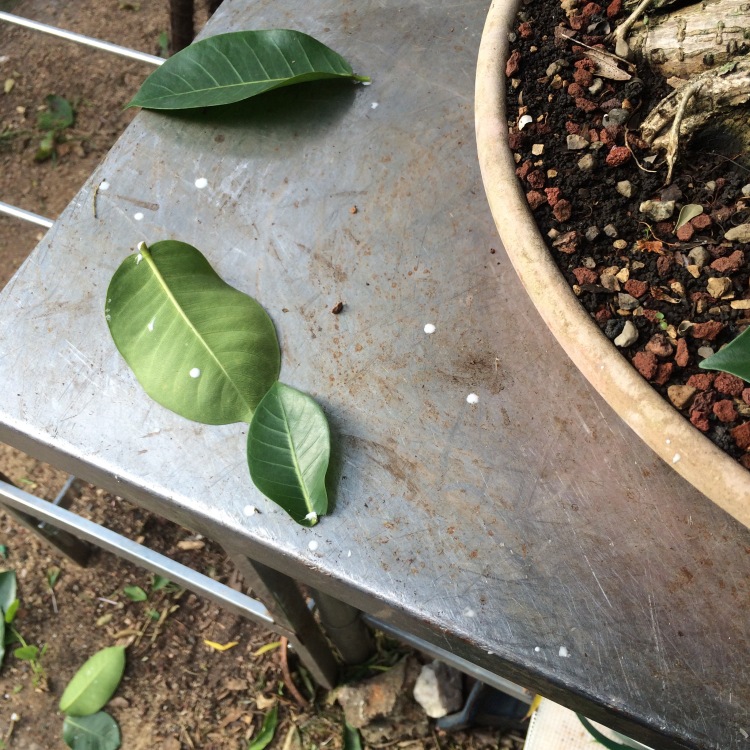 I know, I know, the leaves are huge. They will reduce a bit, but this might be a tree I would show defoliated. If I can ramify it well enough. The tree looked like this after the first styling. 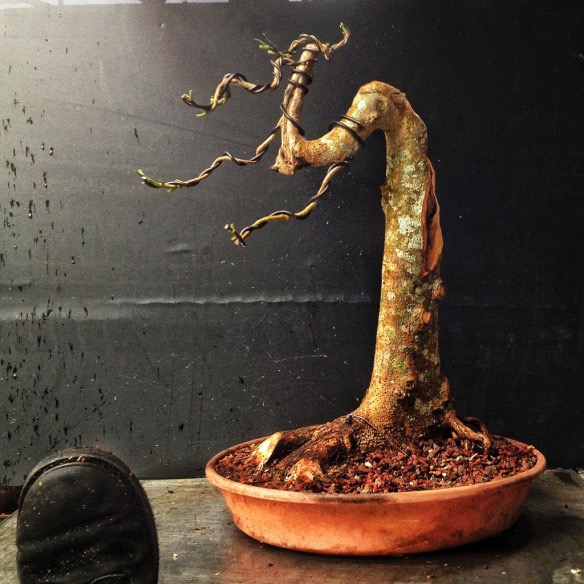 There is a previous blogpost on it here. It’s grown in quite a bit. 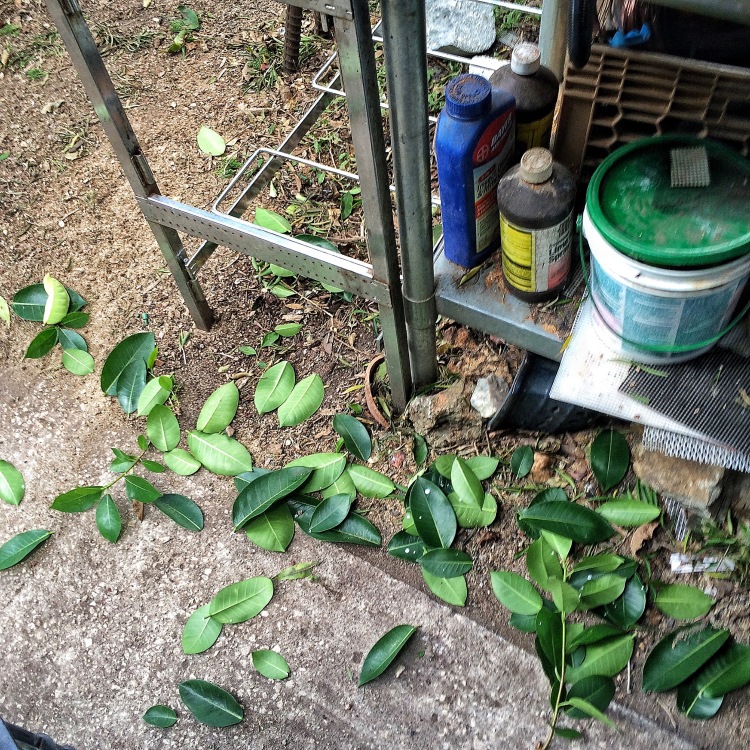 It’s like a ficus leaf slaughter. I wouldn’t have thought there were so many. I’d count them but I can’t count that high.

Someone on Instagram asked why my trees never have leaves. The regular readers know the answer. There are several reasons I defoliate. Mostly it’s to see the structure of the tree when styling and to make it easier to wire. On the rare occasion I defoliate to get smaller leaves. But that’s only for show. Large leaves when a tree is growing on the bench do not bother me. I can see past them into the bones of the tree. That’s what really interests me. 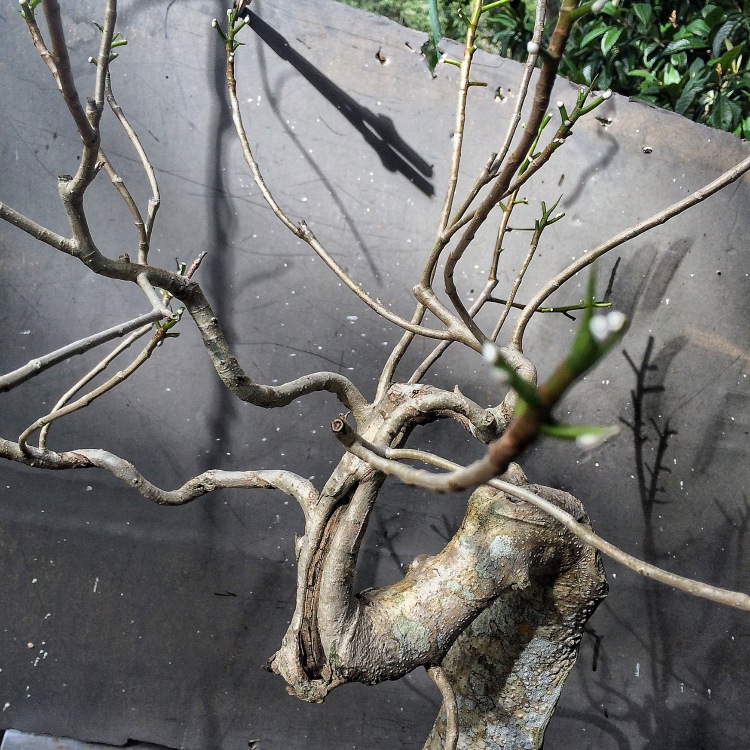 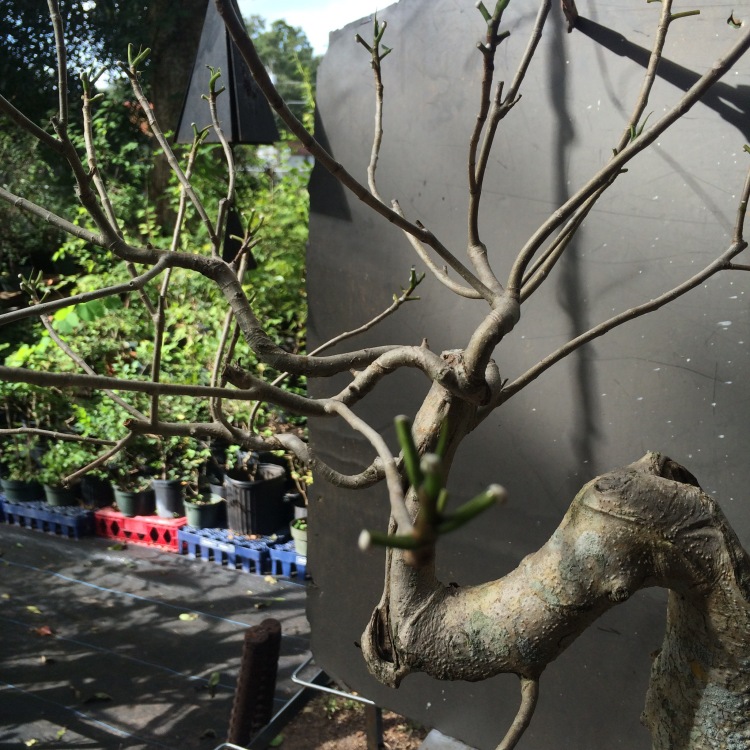 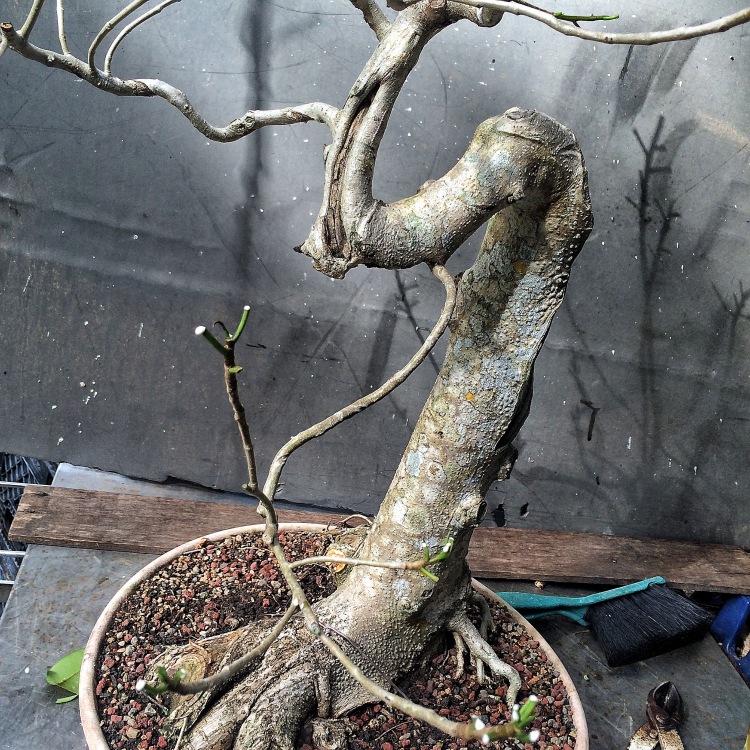 And this tree has some bones. It’s interesting and challenging.

Oftentimes, in art, the repetition of shape and line is what creates the composition (in music it’s the repetition of a melody or theme or chorus). That’s what I’ll try on this tree, with some wire. It’s already unusual in species and initial trunk line, let’s make it more weird. 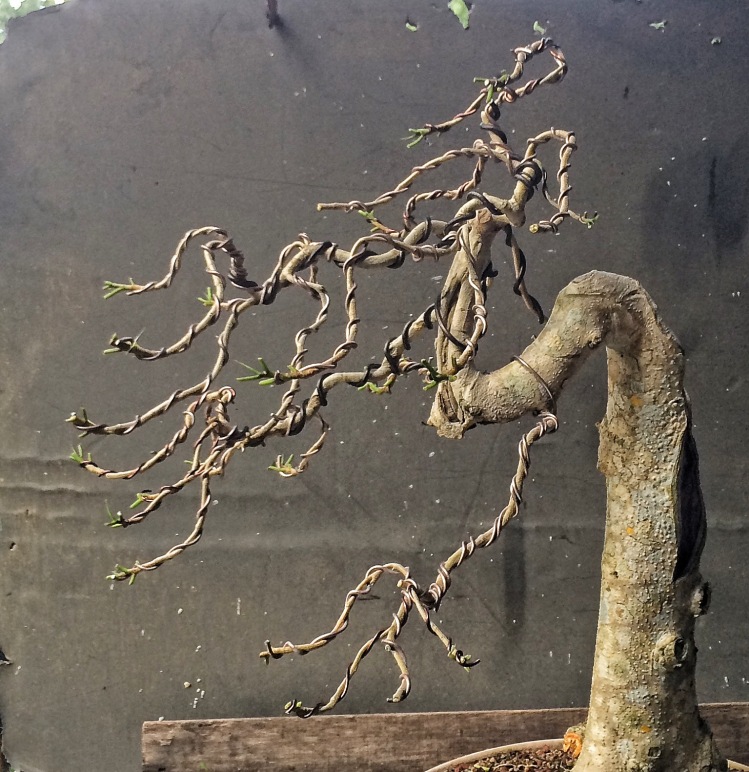 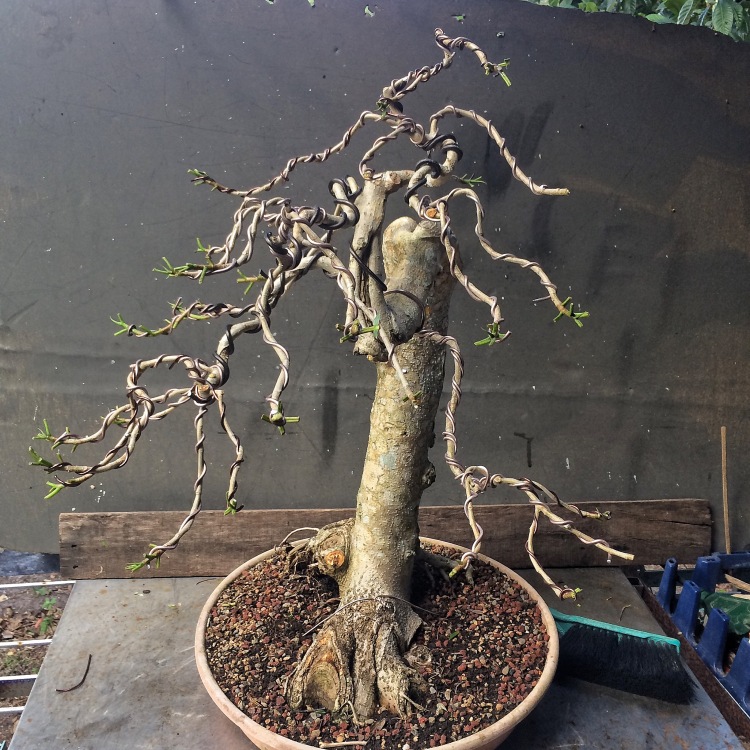 I carved the trunk in the last blogpost on this tree. I think it’s very….inviting.

The repetition of form starts on the first bend.

I repeated it several times.

It works for me, but for many it won’t. It’s not very traditional.

The pics don’t really show it off well.  In real time it’s almost moving. There’s a madness or revelation in those twisted limbs. Follow them or run from them at your peril.

Are you afraid of it?