Who, in their right mind, would ever think that a strangler fig, with the ginormous leaves and the aggressive aerial roots, would (or could) make a good bonsai?
This guy ⤵ 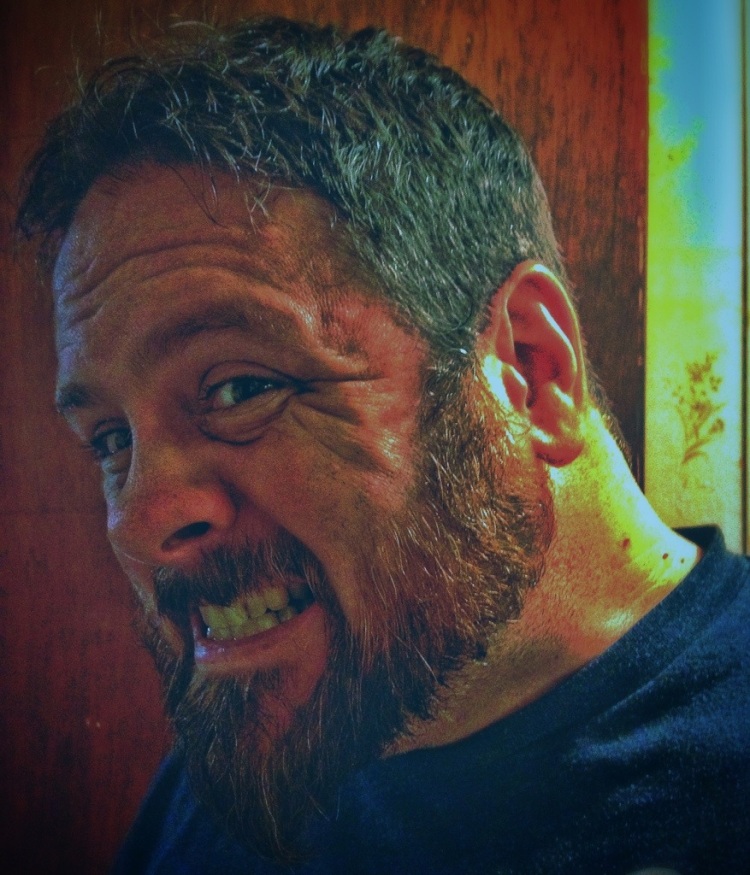 I’m not sure why they call the f. natalensis a “dwarf” strangler fig 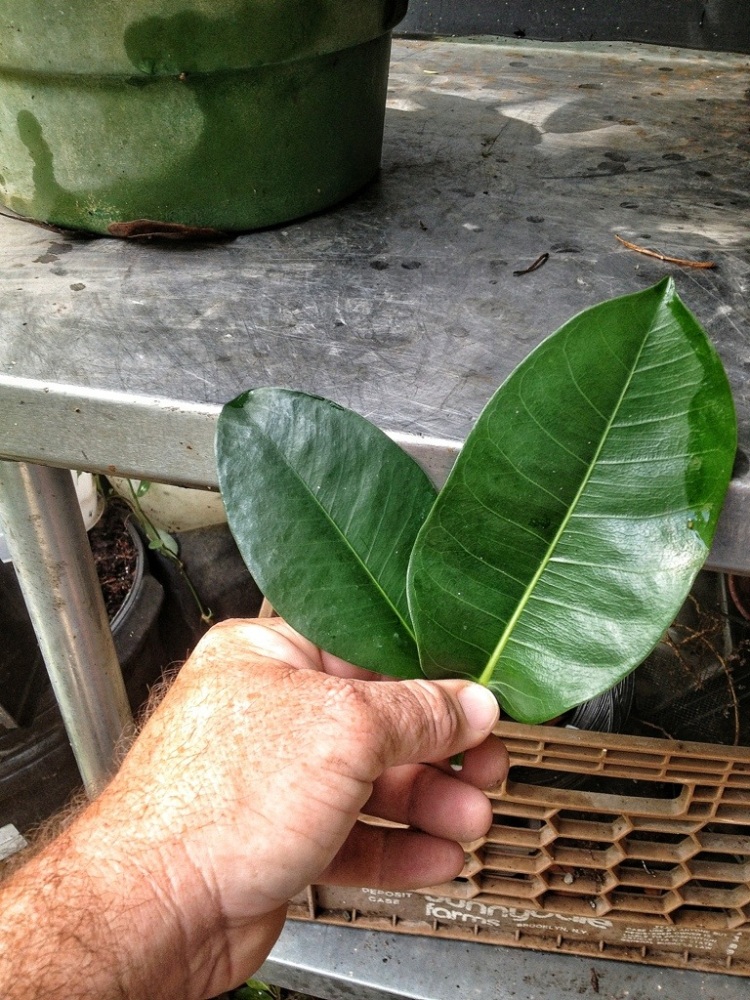 The leave is slightly smaller.
Maybe it doesn’t grow as tall?
Anyway, the one on the left is f. natelensis.
The stipules (which is a sheath-like structure that encases new leaves before the open) are different.
F. natelensis

Which, oddly, is longer than the f. aurea stipule 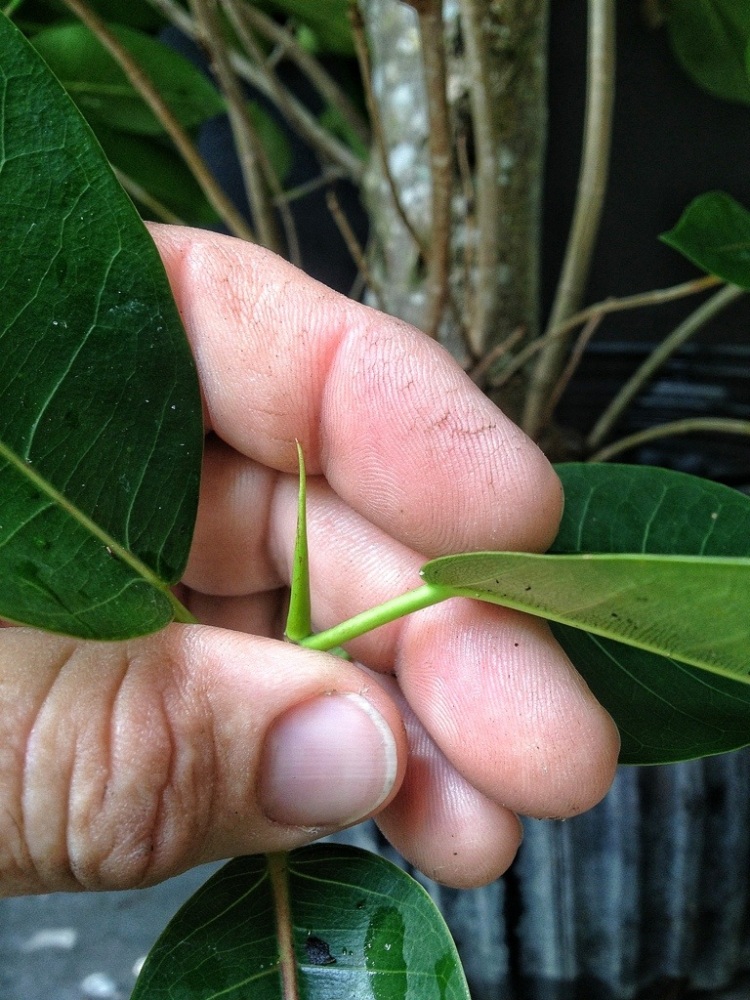 considering the latter gets bigger leaves.
The bark is different too:
F. natelensis

So why are they both called strangler figs?
The one aspect that makes these trees unique is their seeds ability to germinate without soil.
Let me paint a picture for you. A monkey is relaxing in a tree (there are monkeys in Florida, after hurricane Andrew, a family escaped from a zoo near Miami and naturalized themselves in the wild. The alligators love them.) munching on a fig and, after the appropriate time passing, the monkey passes, complete with undigested fig seeds.
Considering that some monkeys have bad aim when they throw their poop at tourists, these seeds sometimes find themselves deposited in nooks and crannies of trees or bushes; and even the cracks of buildings (usually Federal buildings and police stations; monkeys being naturally anarchistic). The seed will germinate and begin to grow, epiphytically, dropping down aerial roots that may take years to reach the soil. This process will eventually envelop the structure the ficus is on (tree, building).
In the case of a tree, the ficus often kills it (hence the name strangler) and the tree will rot out from the middle, leaving a hollow, columnar ficus form. Cool.

Here’s a tree from Erik Wigert’s

He collected this cypress with the ficus growing inside of it. Imagine the monkey using the hollowed out cypress for a….I’ll leave at that.

Cooler.
Back to my trees.
I got the f. aurea from Erik. He collected it in Southwest Florida somewhere.

The natalensis I got from Jim Smith. 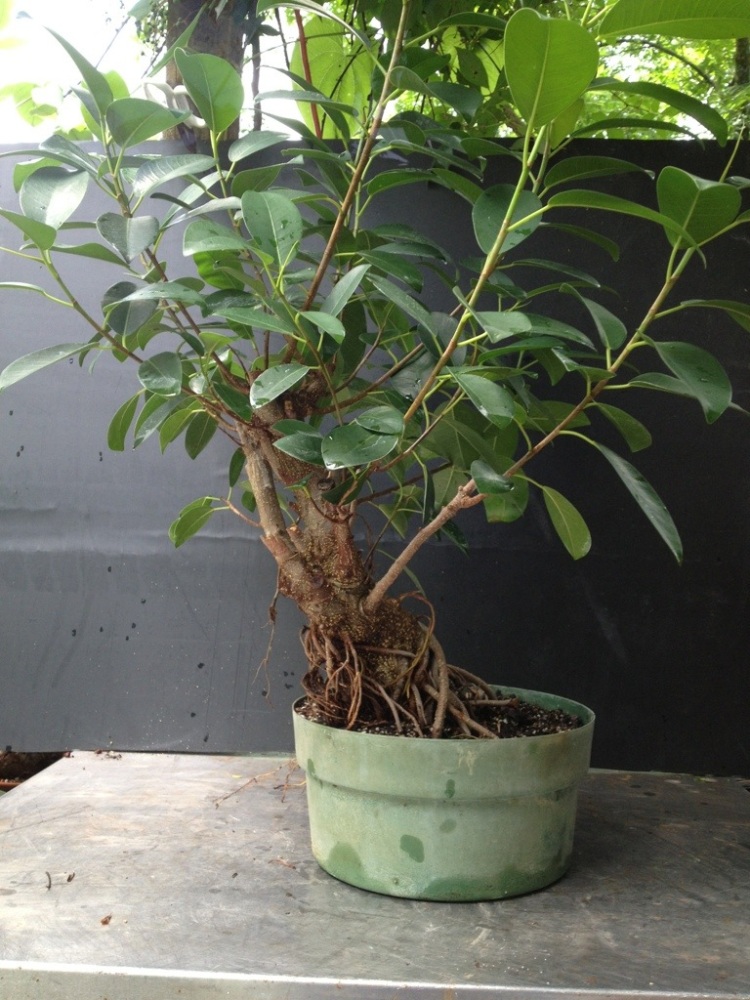 I’ll start with it. 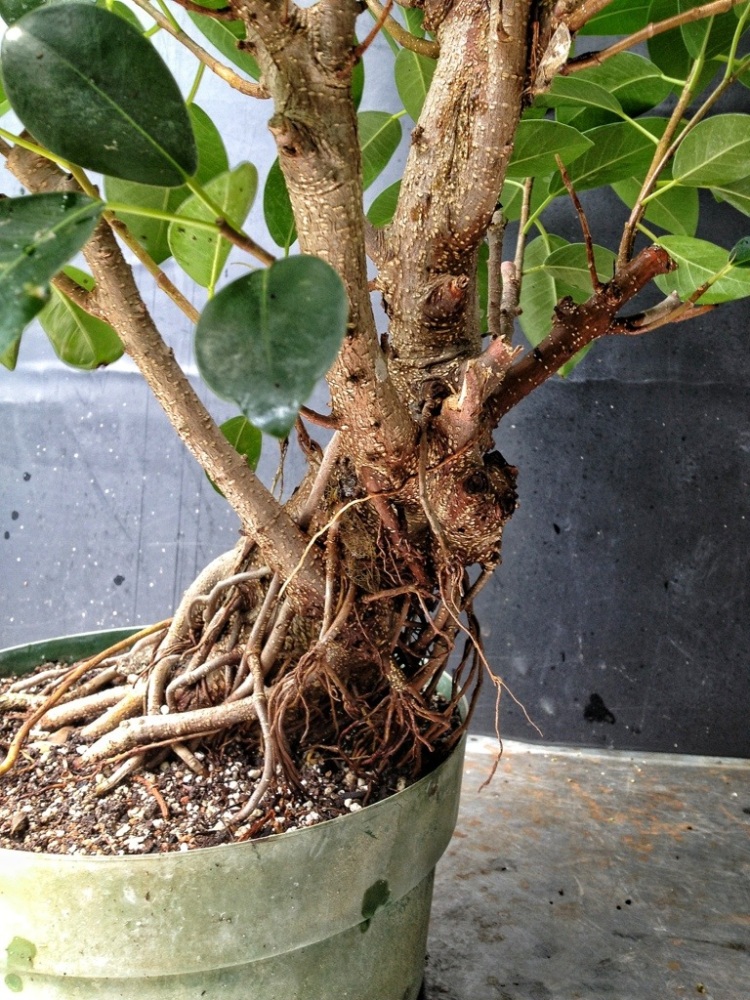 Not sure why I got it. The branches are unusable

These two come off the trunk at a weird angle

The aerial roots engulf the trunk like some weird, solid miasma. 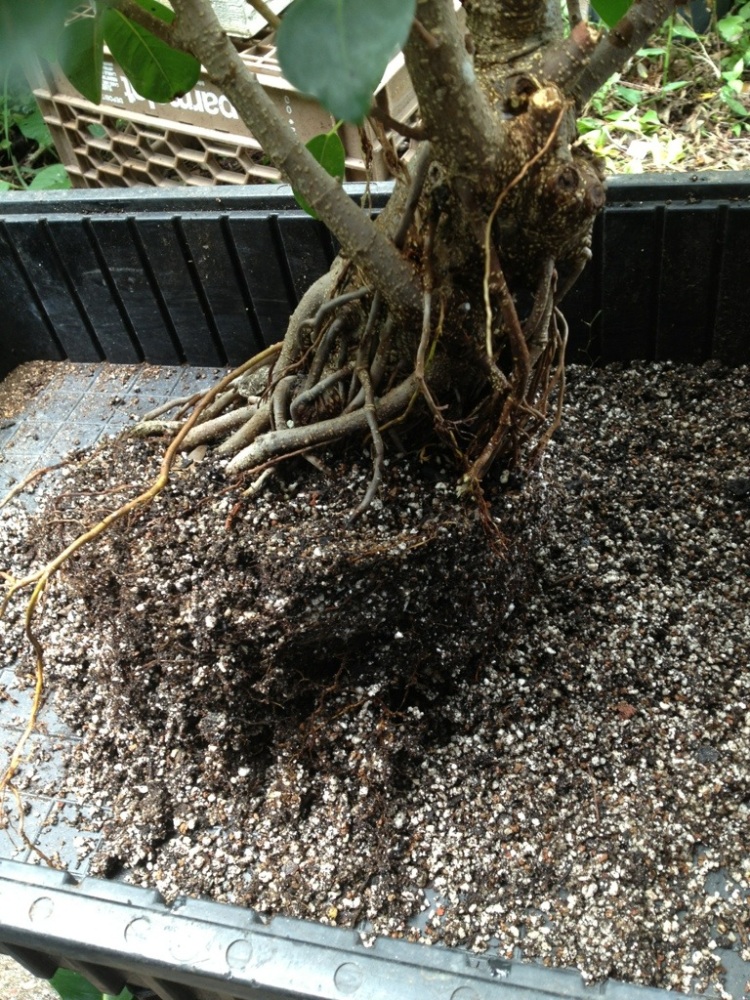 The only thing to do is cut it back 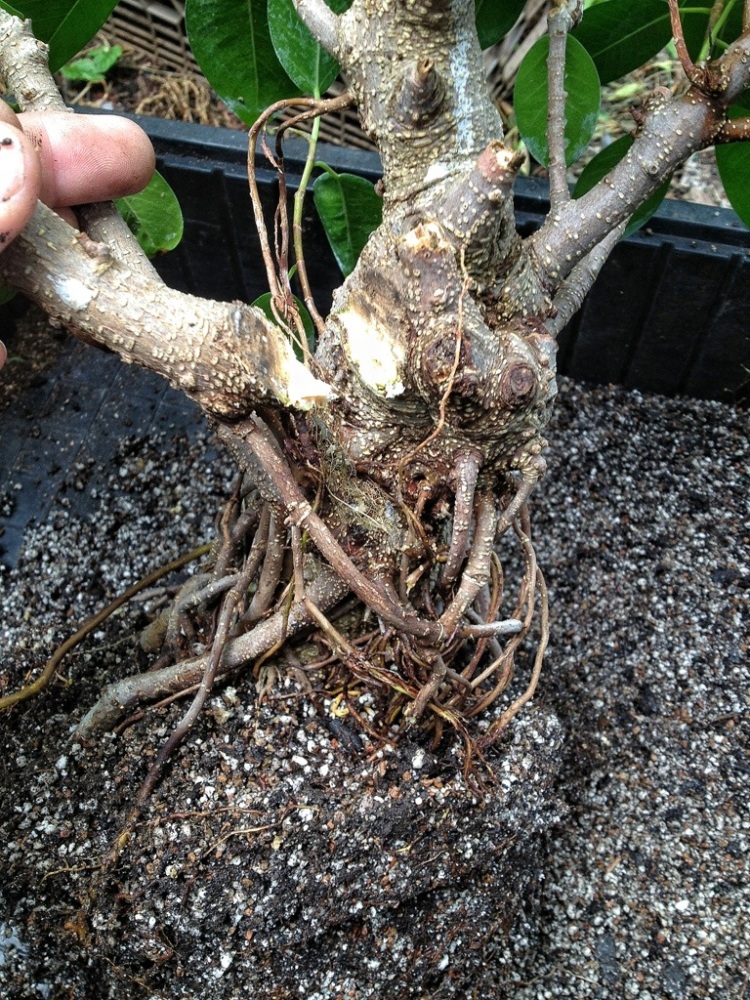 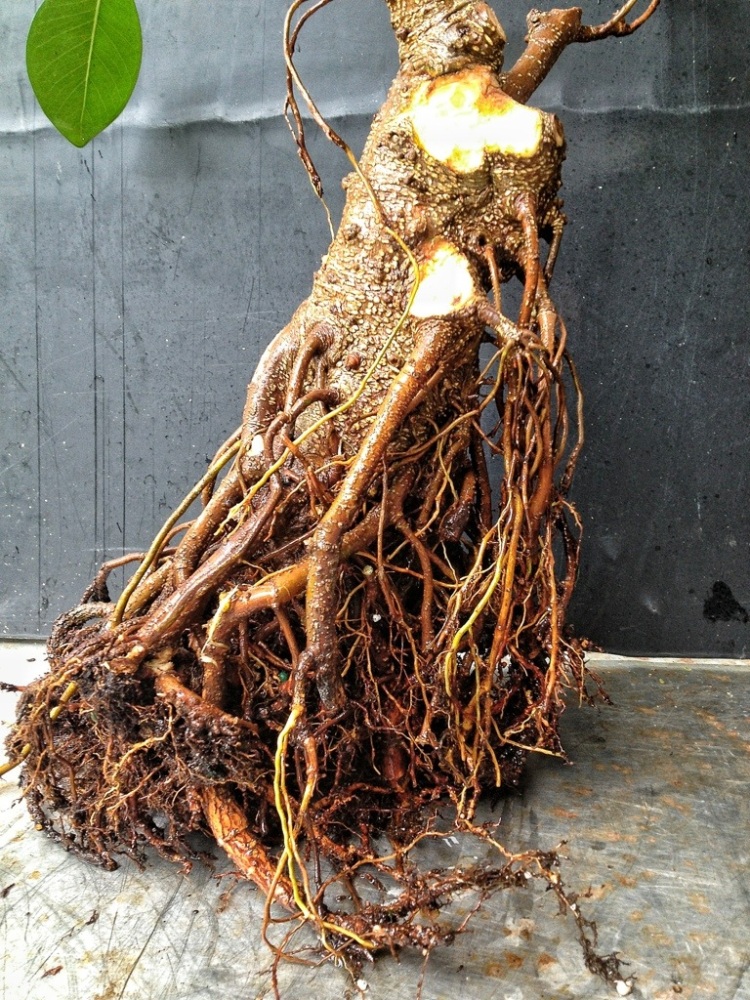 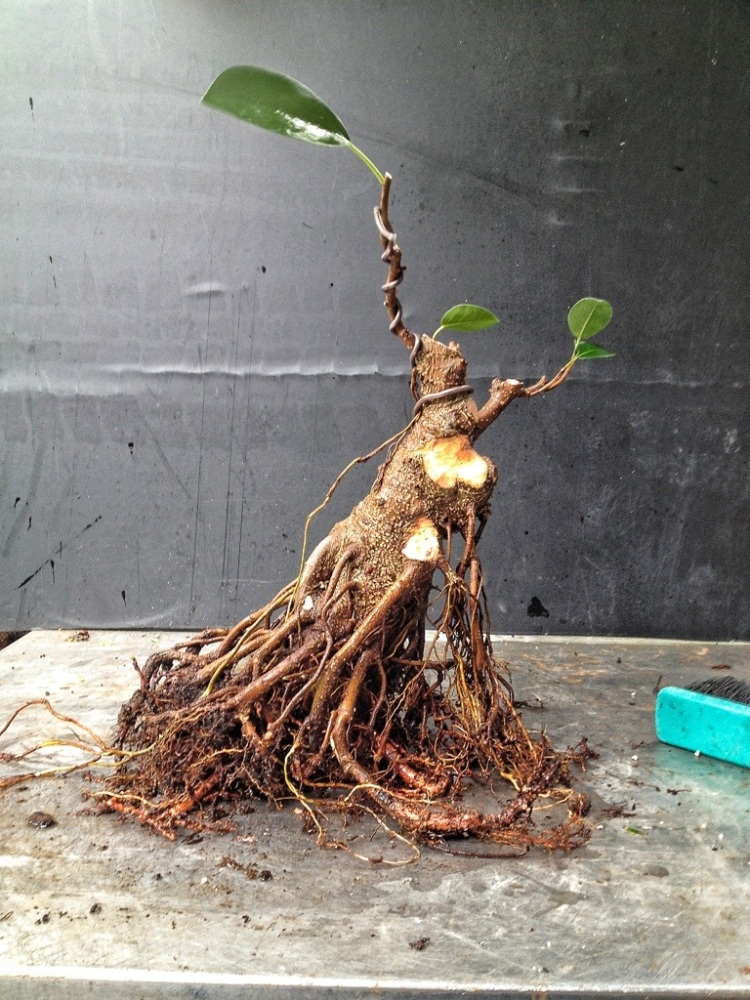 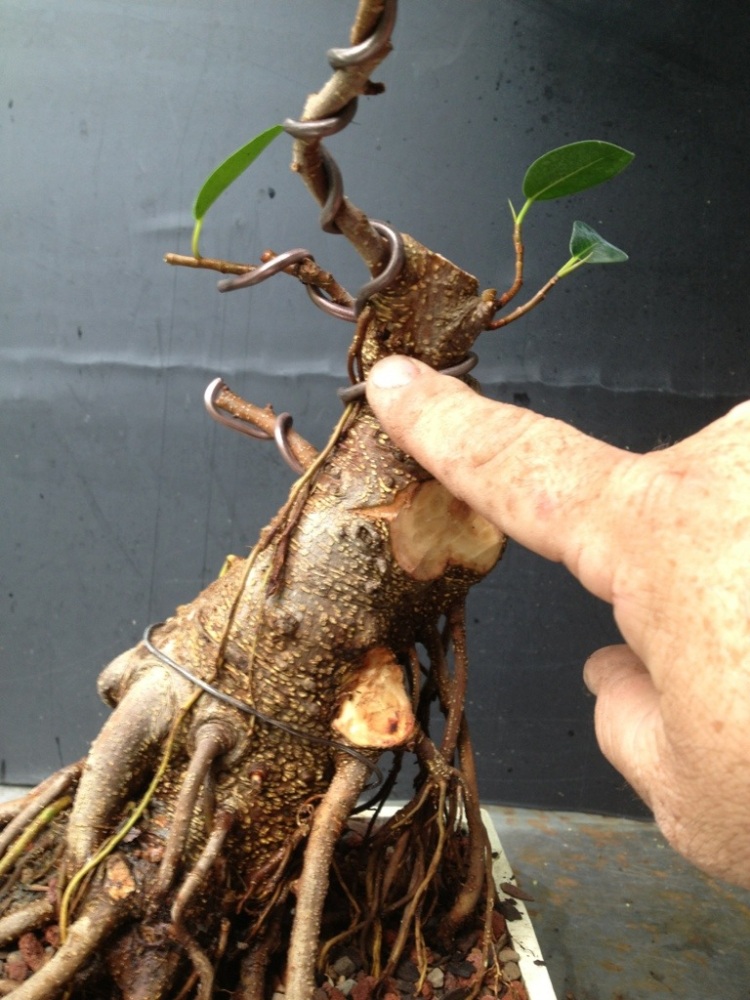 By tying it to the trunk

It should eventually fuse with the trunk, adding to the character of it.
I potted it slightly crooked 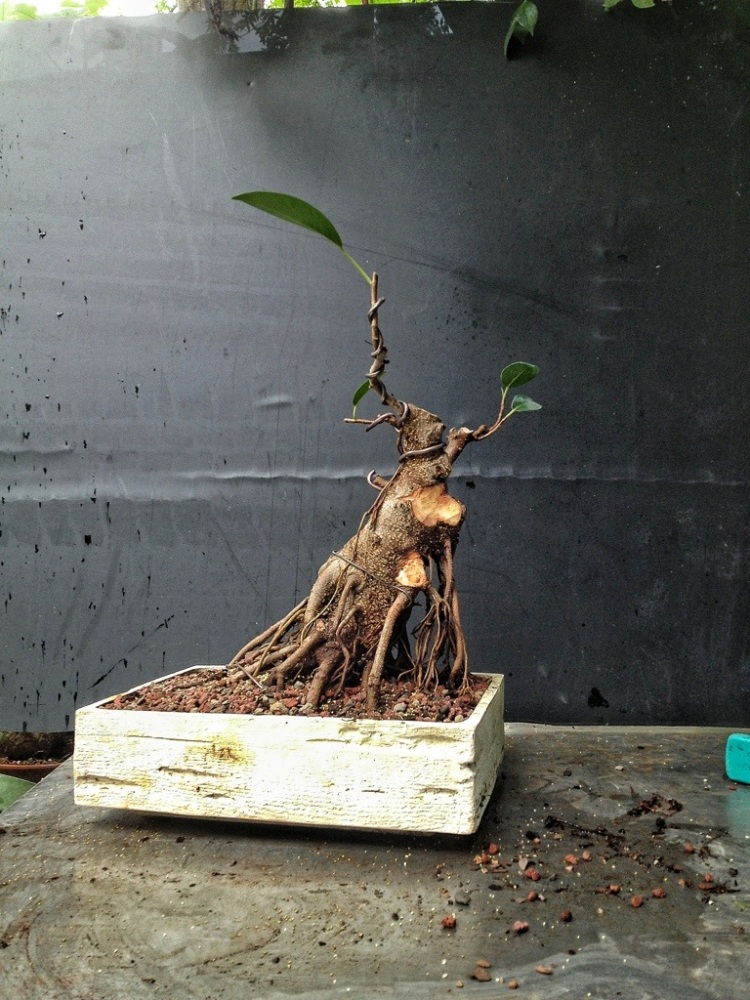 For no reason. It just happened. It’s just a training pot.
Fertilizer, full sun, let it grow, watch the wire. That’s all I can do with this one.
That was the work. I always do a little work first.
Now I get to play.
I know exactly why I picked this one 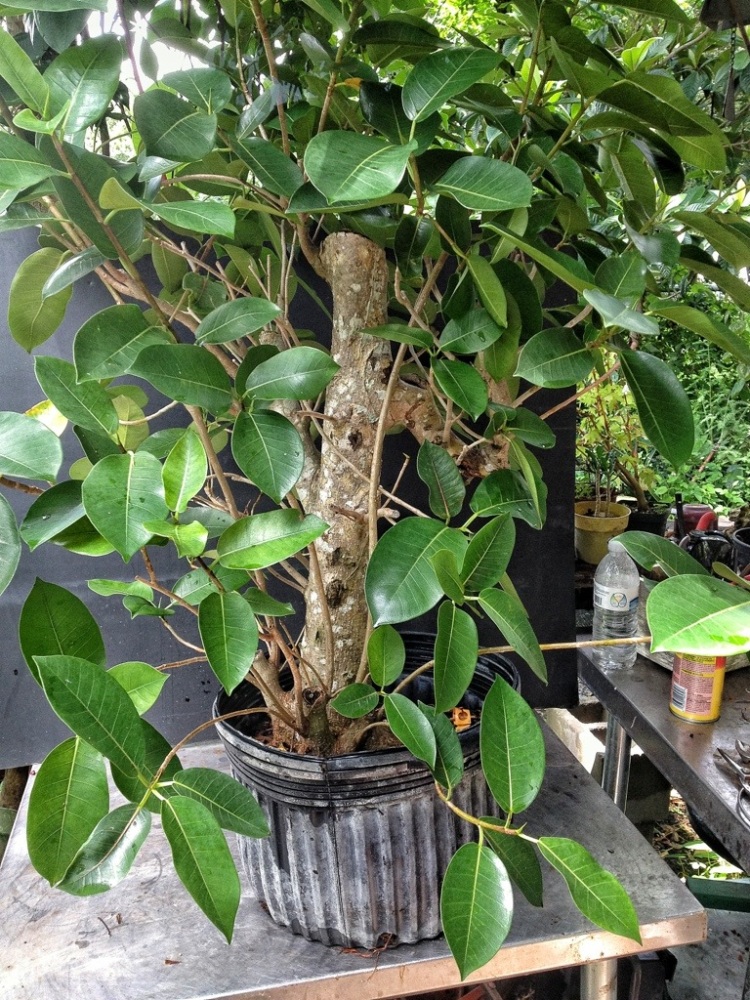 You’ll see.
What I plan on doing hinges upon this trees ability to do this

That wound has healed almost completely. Most ficus take many many years to do that, if at all.
This wound is not that old, considering the size of the trunk. Maybe 10 years old.
At least, that’s what I’m betting on.
Let me clear out some of the superfluous wood, so you can see what I’m doing

Wup, that was abrupt.
I plan on a bunjin style tree.
With a little carving too.
To make it easier (not really, I should have used my big angle grinder) I cut a wedge 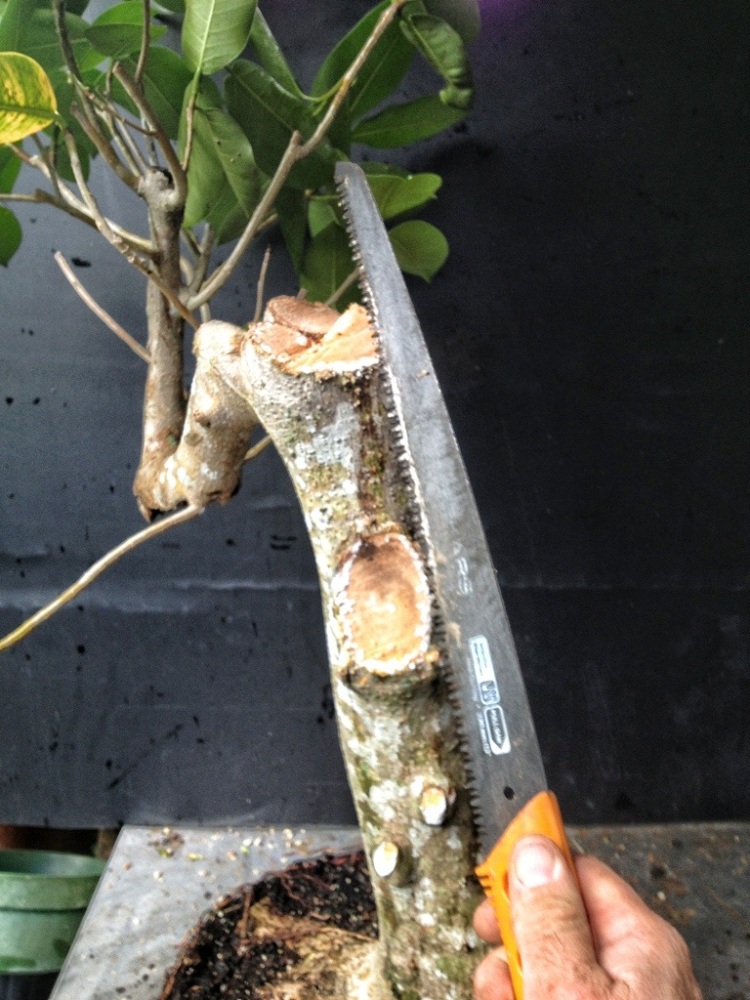 and pull out the die grinder to finish the job. The aim is to create some taper by carving a hollow. And, when it begins to roll over, it will look incredibly old.

Some fire and then the knife

And that doesn’t look too bad

Everything else is covered in sawdust.
Including me

Such is my life

I wouldn’t have it any other way.
Next, it’s branch selection.
The hardest part on any bunjin tree

It’s a matter of the “less is more” principle.

This will be the top of the tree.
I don’t want to compromise that wound. (He says this after brutalizing the trunk, who is this guy?)
A quick defoliation 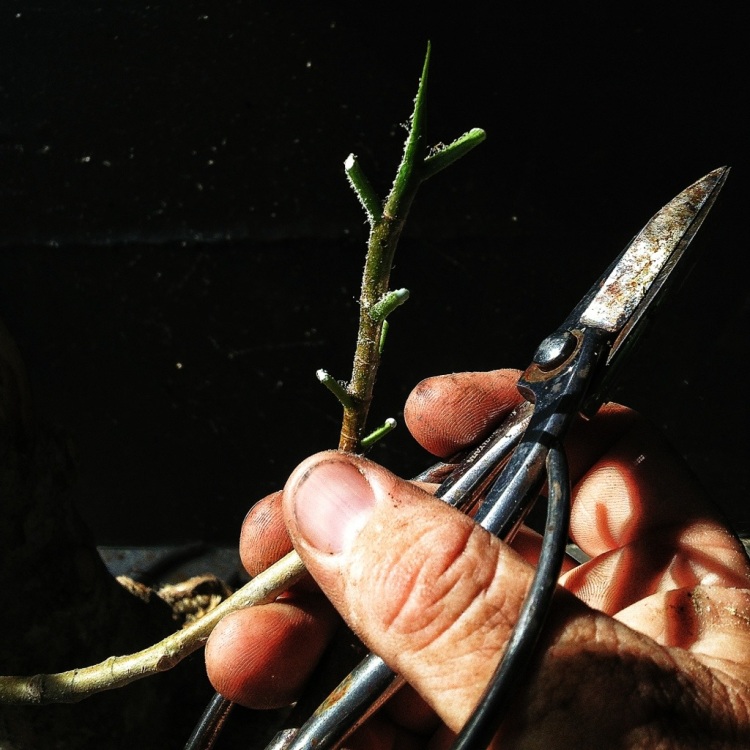 And this is what I left. 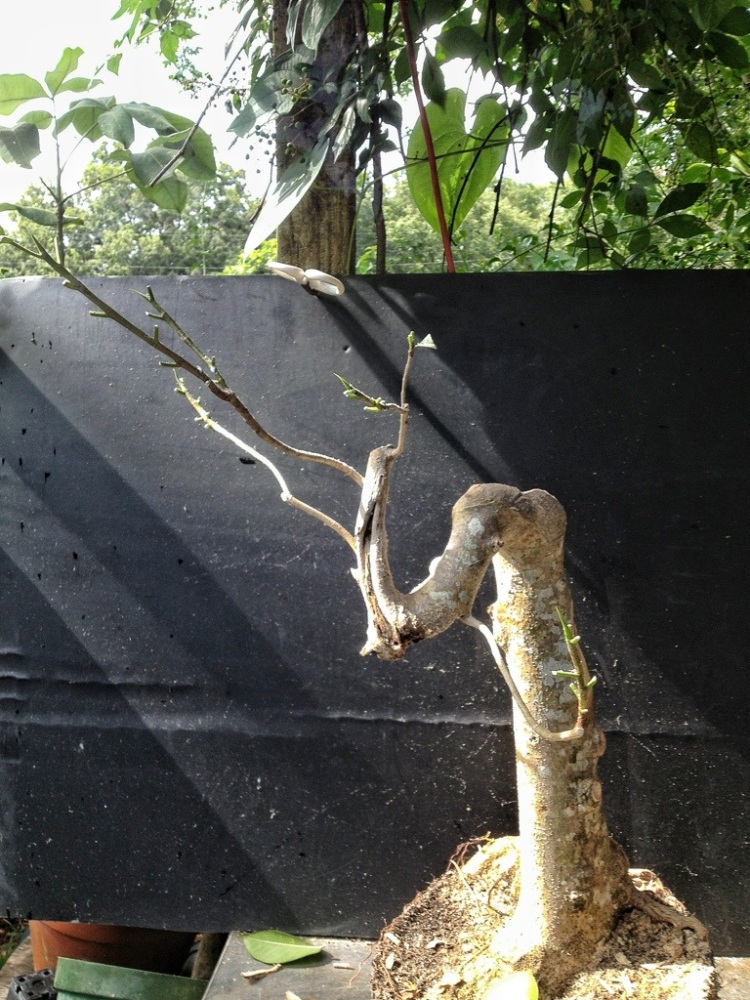 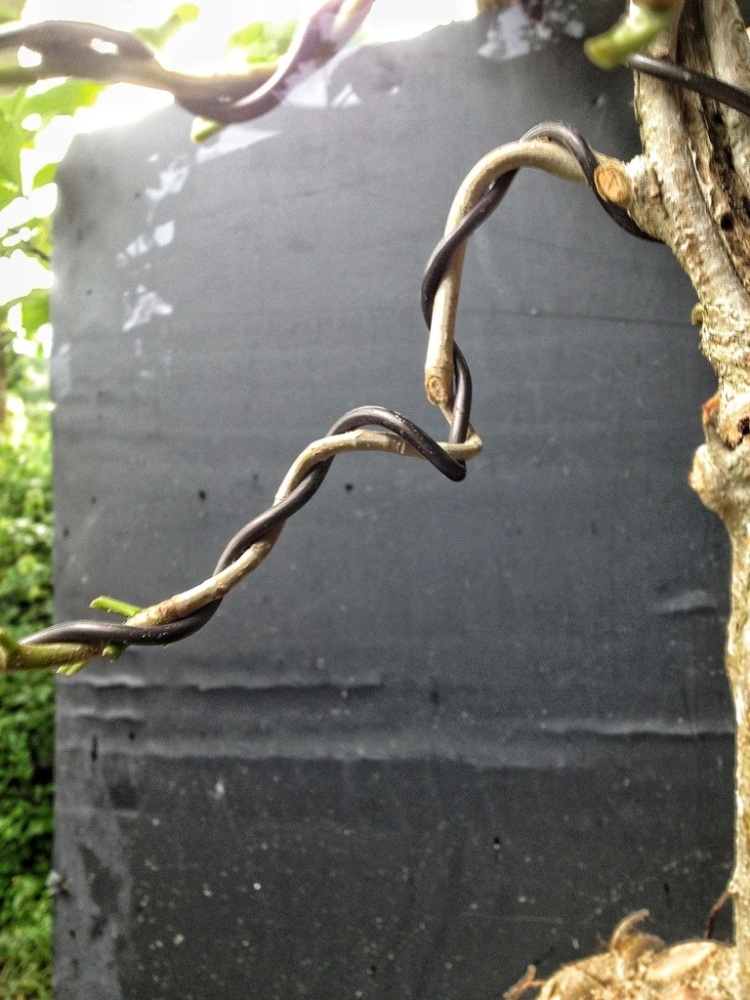 And now to repot (you’ll have to wait until the end to see the, uh, end).
I found this fine designer, plastic pot in the pile.

It’ll have to do.
It needs some clean up on top 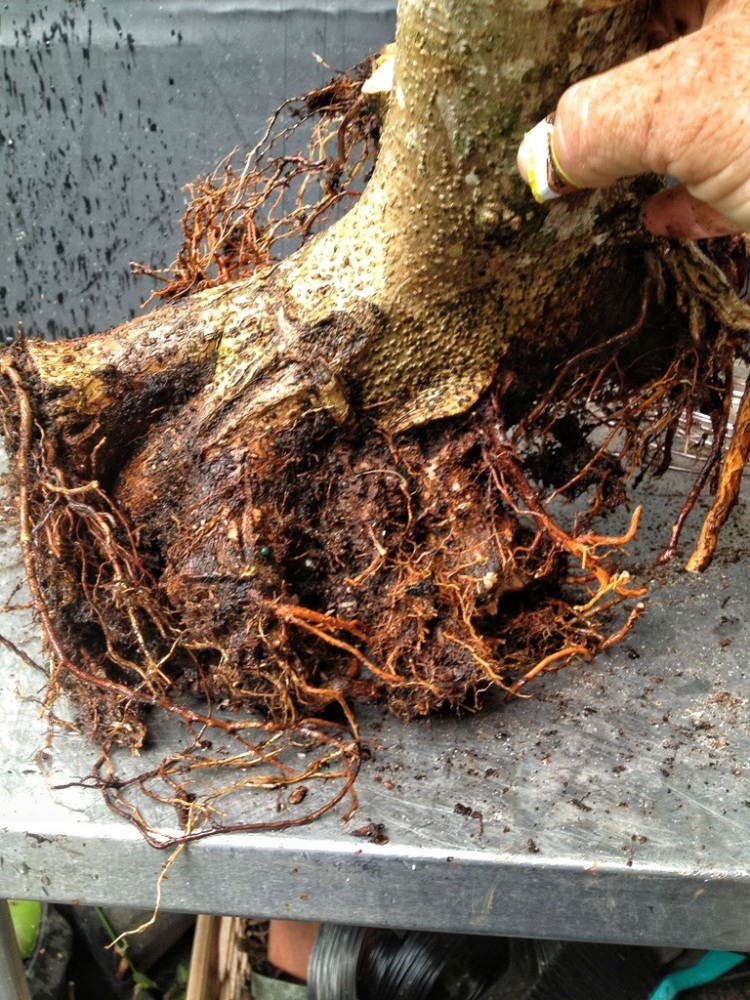 Especially at the cut ends

which should heal over and appear to be two roots.
And next I need to plate cut the bottom

Why would such an extreme procedure be necessary here?
To induce more rooting. Right now the only roots are coming from just those cut ends.
By plating

roots should emerge from near that cut edge
(Here, highlighted in red) 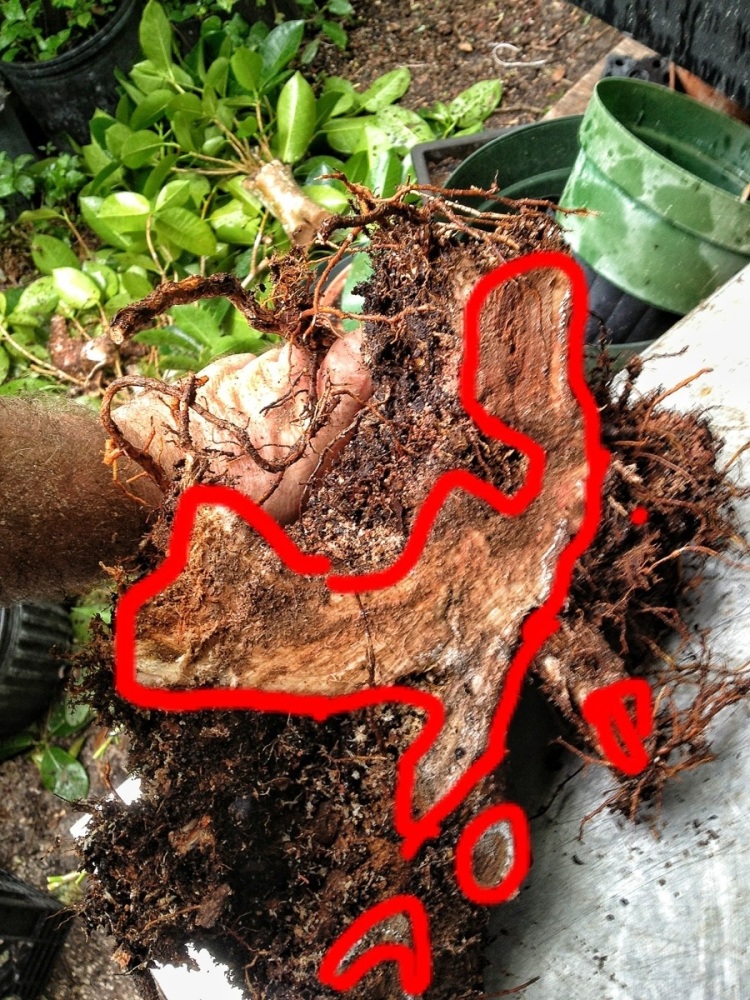 Which will improve the nebari considerably.
Next is the potting 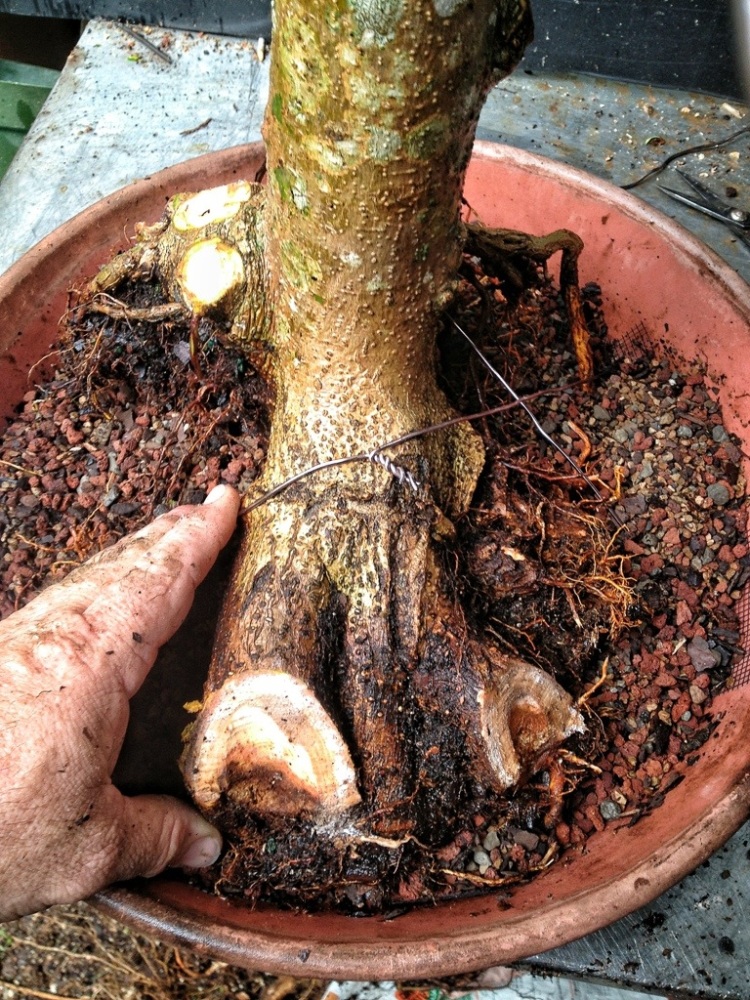 And now you get to see the tree 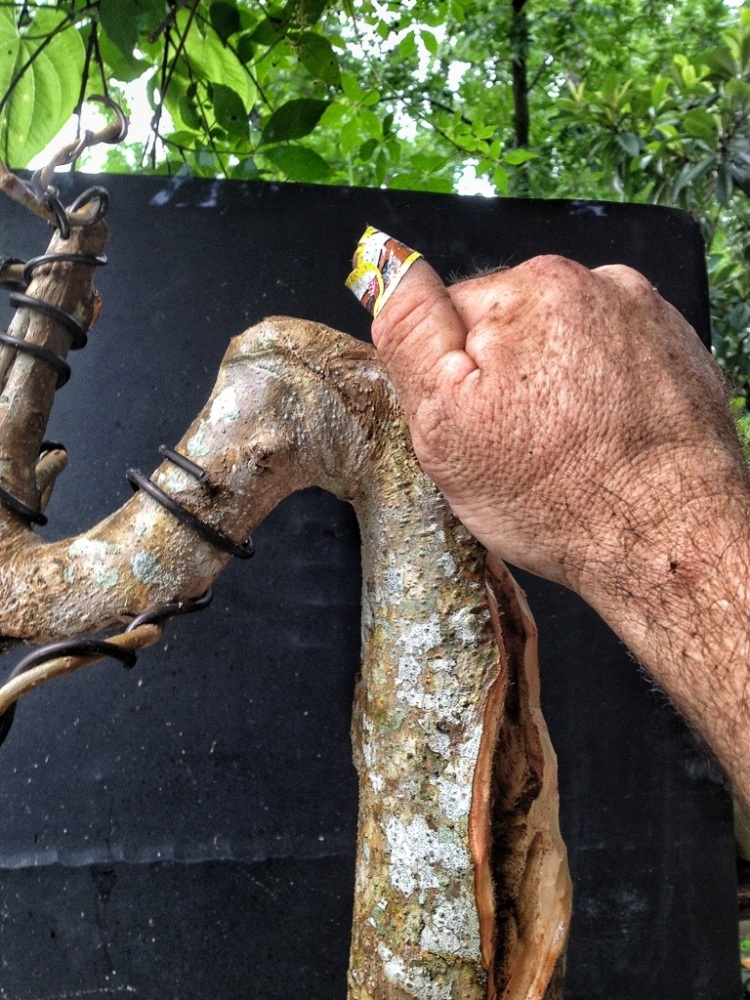 Yeah! (And,yes, that is a SpongeBob Bandaid)
Get out the knife and

Aftercare for these two trees.
Full sun, water, and watch the wires.

In my conversations with Erik (these are my first strangler figs btw) he says that f. aurea’s leaves will reduce. The problem is ramification.
F. natalensis has been used often enough in bonsai culture that its suitability as a bonsai subject shouldn’t be in question.
Of course, it is.
It’s usually questioned by those who hate aerial roots though. Or any tropical for that matter. They can’t all be elms and junipers.
These trees should be fun to watch grow.
We shall see what happens.

Alright then, here’s a drawing of the f. natalensis. (I sent a preview of this post to a friend and he insisted on a drawing)