There it is. It’s been sitting there, waiting, for well nigh on two years.

It’s a collector of spines. It sits on its perch and licks the gristle and flesh left on the vertebrae it’s been hoarding and wears on a string, gnawing and cracking the bones, sucking the marrow.

I’ve left it too long, the taming may not work. It’s a beast. A bouganvillea glabra, thorny, wild.

First, I have to move it. Perhaps another few vertebrae will be added to its collection today.

But I worked smart, I used a wagon to move it.

But for that, I still got yelled at by the wife….she who must be obeyed.  She told me not to pick it up by myself. I’m stubborn.

I warned her that I’d put this pic on the blog. I may never sleep in my bed again, but it’s still funny.  The last time I worked on the tree (the full story and more, such as the smuggling of a nubile young female onto an old style sailing ship, and other randy details, can be found by clicking here) I had the help of Guaracha. He’s a bit busy of late, working overtime to pay for paintballs. It’s fun shooting and hiding and all that but when you get hit…..I’d rather take my lumps from my wife. She will at least kiss my boo boos better, as well as other…..places

There’s the beast. It’s suffered from my illness as much as I haven’t seems. The top has died out and lost some deadwood.

This was how it looked in the last post: 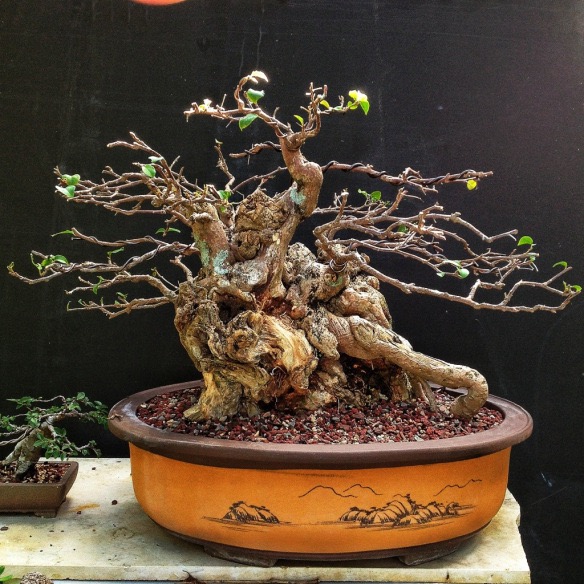 It’s frustrating to lose the whole top of a tree, I just need to rip it off! Grrrrrrrrr! 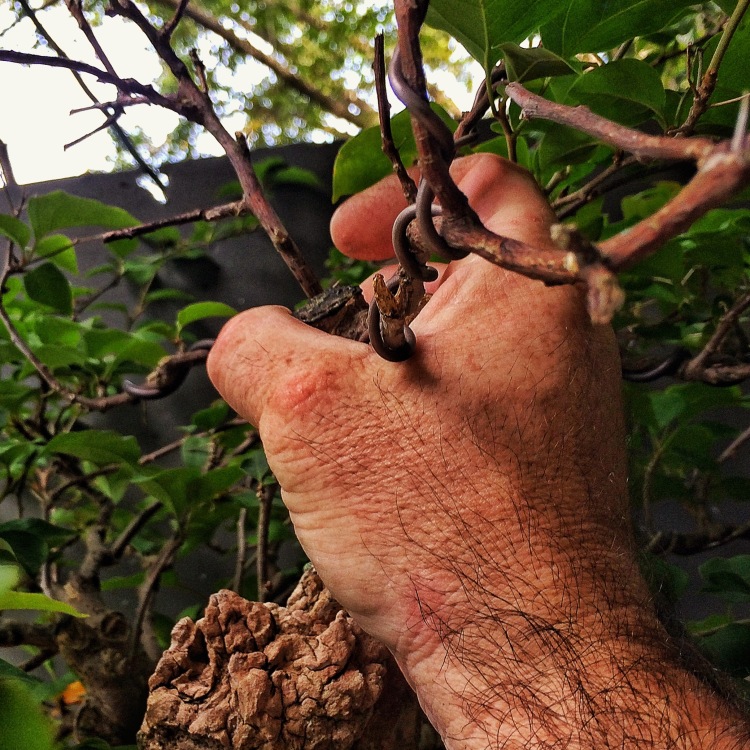 Losing the top means I need to change the front a little.  About ten degrees counter clockwise.

That should work. Now I need to do some re-potting…. 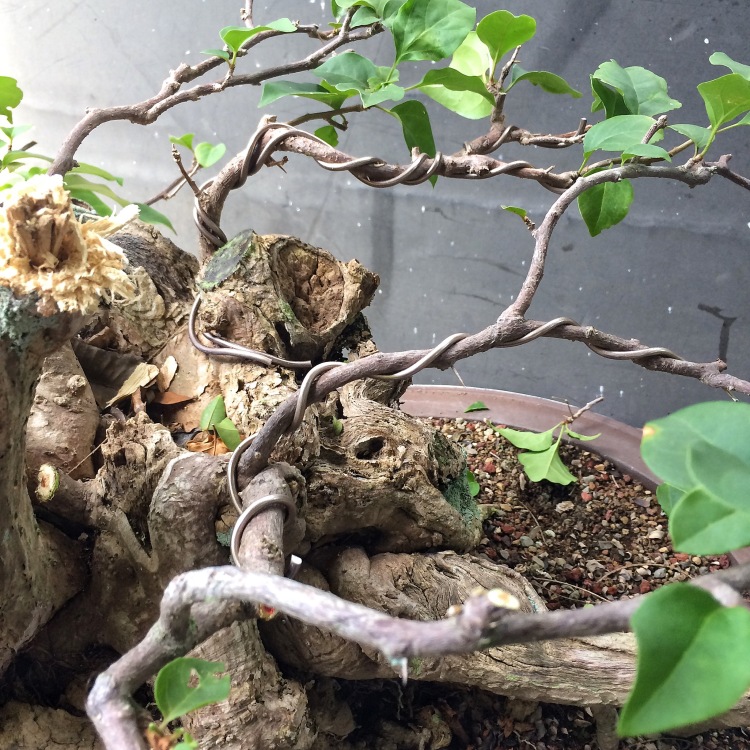 The secret to keeping deadwood on a bougainvillea (which I learned from Dan Robinson, believe it or not) is to make it thin and hollow. You see, it is very sponge-like and will hold water. 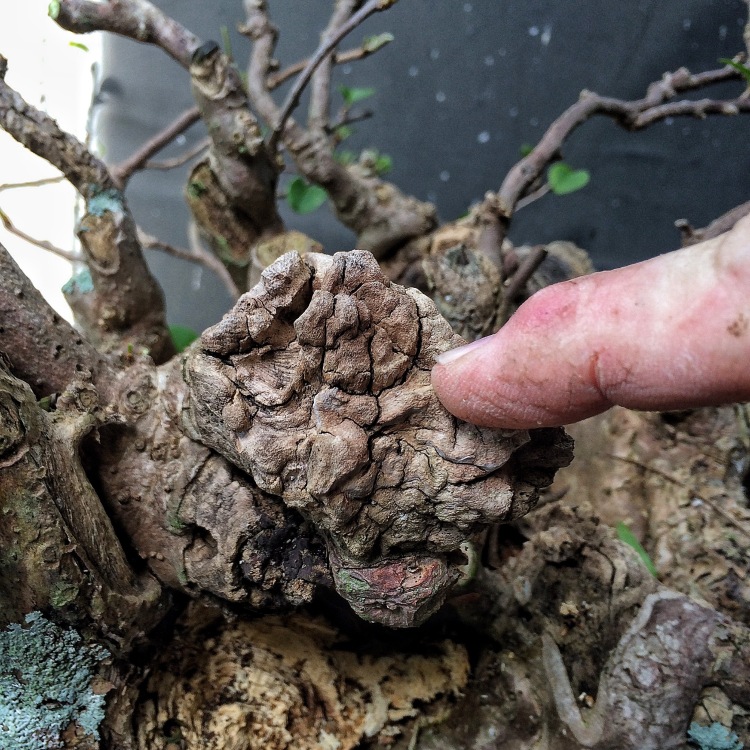 So the idea is to hollow it out to allow the wood to dry. 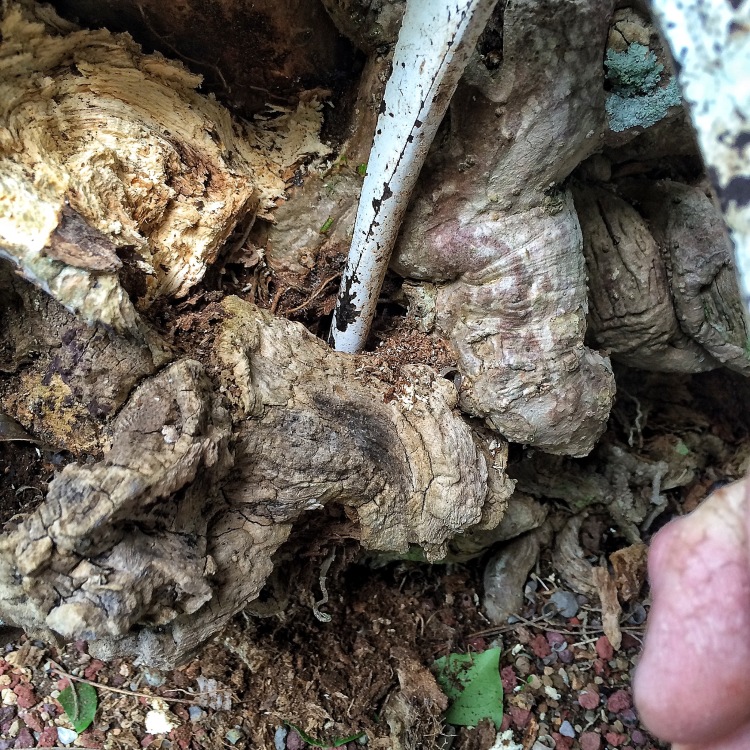 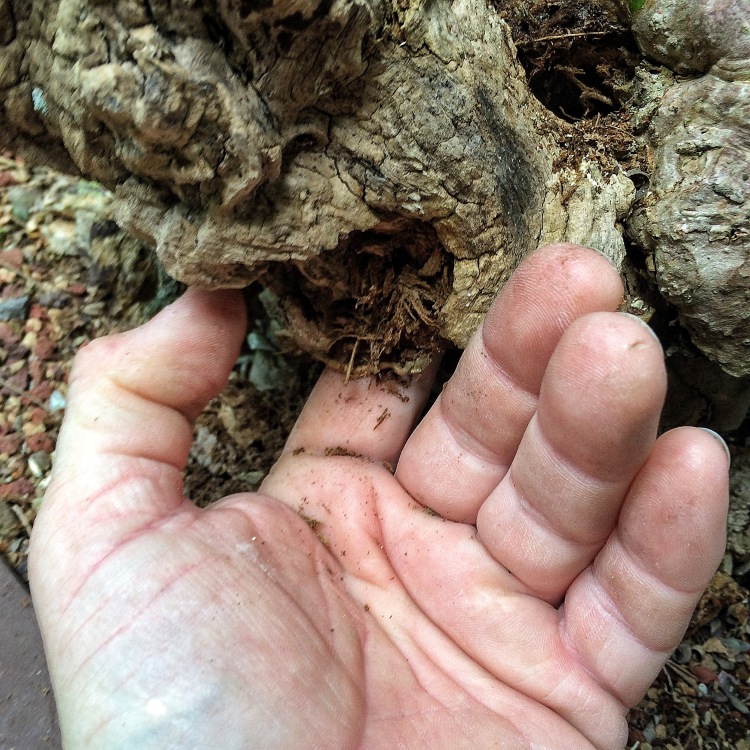 Then you protect it with a wood hardener and lime sulphur.

Now, where is my wife? She’s seemed to have abandoned me. I need to get the tree from here…. 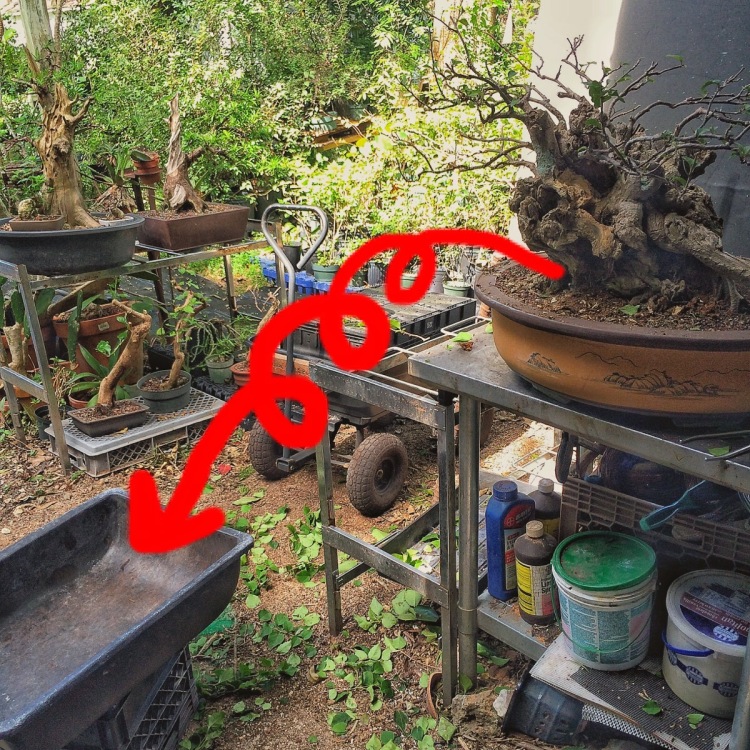 Oh yeah, I’ll feel that in the morning. At least I didn’t pop my stoma out.

You can see the need for a repot. 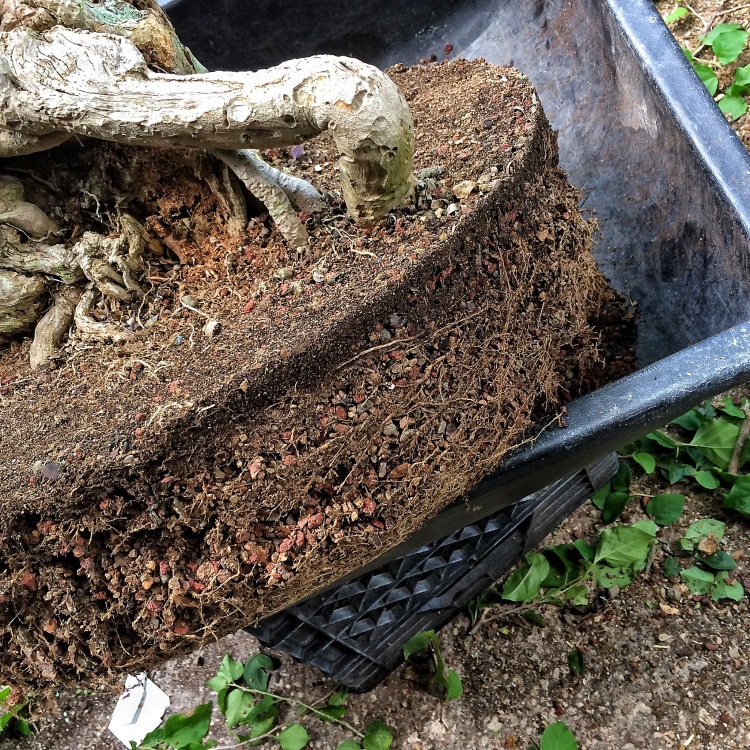 I’ll just need to rough up the edges a bit, really. I didn’t remove much soil.

It’s time for a different pot, I think. If you read the previous post, I made a big deal about the original pot.

So, to please the peanut gallery,  I’m going to see how it looks in a plain one.

And now for some wire.

I’m having to rebuild the top, there is a baldspot. 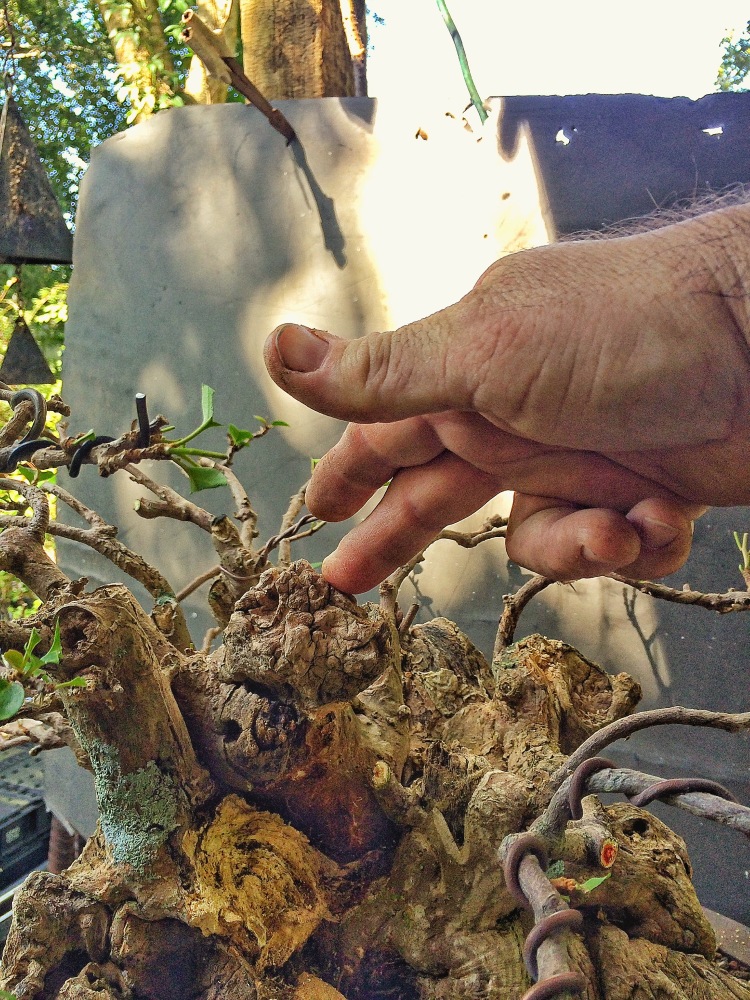 This is the “comb over maneuver” It shouldn’t take too long to fill in. A year or too. It will push hard after this operation. Repotting a bougie stimulates the tree, much like it does to a ficus.

What do you think? 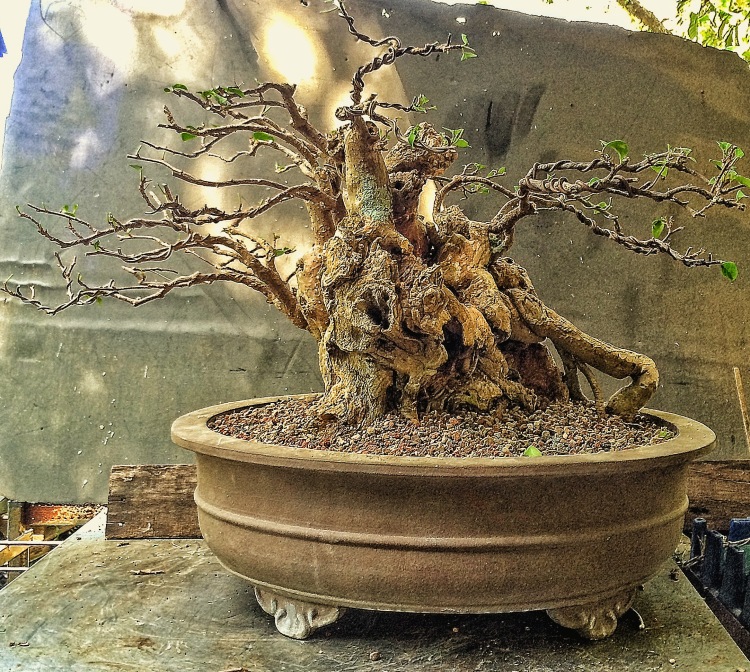 Yeah, I don’t like the pot either. It’ll have to do until next summer, I’ve already fertilized it. The pot looks too big, but it’s actually the same size, except for the feet. I can crop them out I guess.

A little better. I miss the sleepy, seaport village from the original pot. It was homey.

In the next installment,  I’ll continue the bougie theme and work on the one I collected last year, chronicled in this post. See you soon!