I’m out in the nursery, watering the trees, about a week ago (spring in Florida is brutal, we don’t get April showers so it’s tough on the plants, especially today, at 94 degrees Fahrenheit) and I get a phone call from Diane.
“What are you doing?” she says.
“I’m watering…” I start to say.
“My neighbor..” she says “…is taking down his fence to replace it and I convinced him to get rid of the bougie…”
“THE bougie?” I ask.
“Yes. THE bougie.”
She says.
“How long until you can get here?” She asks.
To explain, I was at Diane’s house about 4 or 5 years ago and, even at that time, she was complaining about the bougie; it was so big it went over the fence and it hit her bedroom window. The house is about 20 feet from the fence.
In the wet season I’ve witnessed a bougie growing a foot a day from the rain so it was a task keeping the vine trimmed at the fence line.
I tell her that I can be there in about a half an hour.
It’s about 11:30 am.
That’s right, midday in Florida at 94 degrees with no shade.
When I get there, I start to dig and tire pretty fast, as you might guess.
She says to me, me kneeling in the dirt and all, “don’t forget to take some pictures for your blog thingy or whatever”
Ok, here they are and the blogpost.
The first pic. 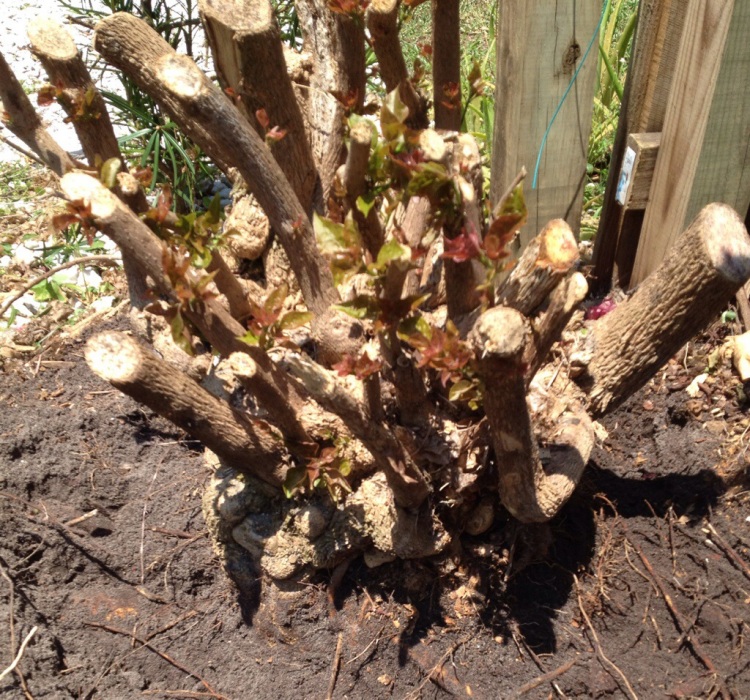 Did I say big? Dayum!
It’s got to be 18 inches or more at the soil line.
And did I say hot?
It felt like this: 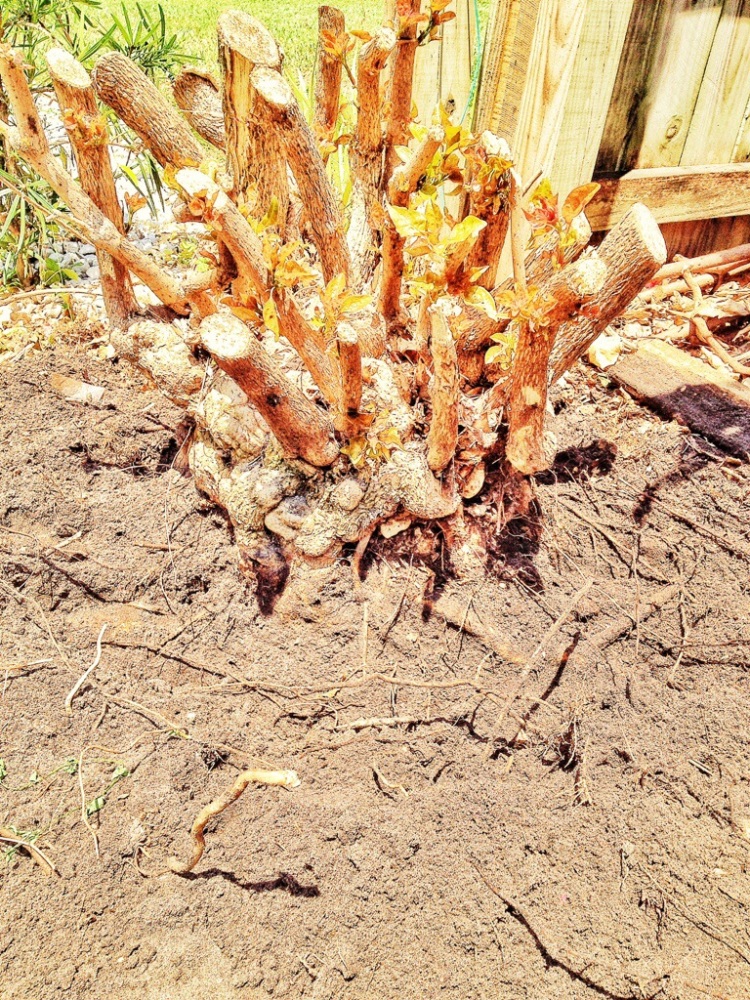 Ah, the power of Photoshop.
It looks like the surface of Mercury.
It surely felt like it.
First of many breaks in the shade. 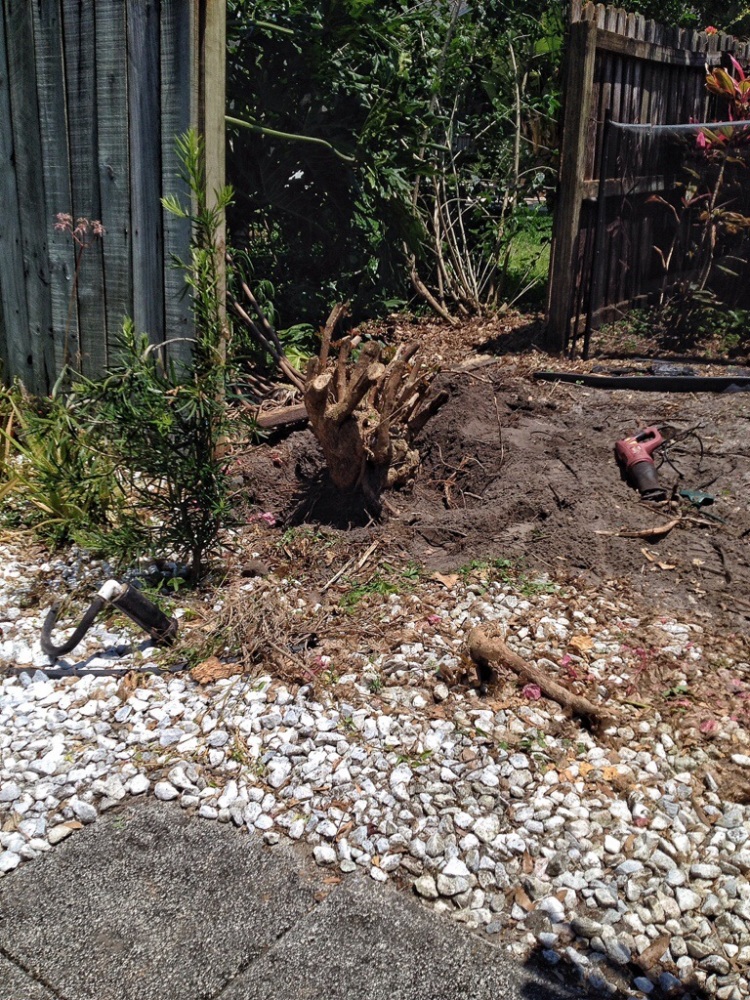 What is that in the foreground? 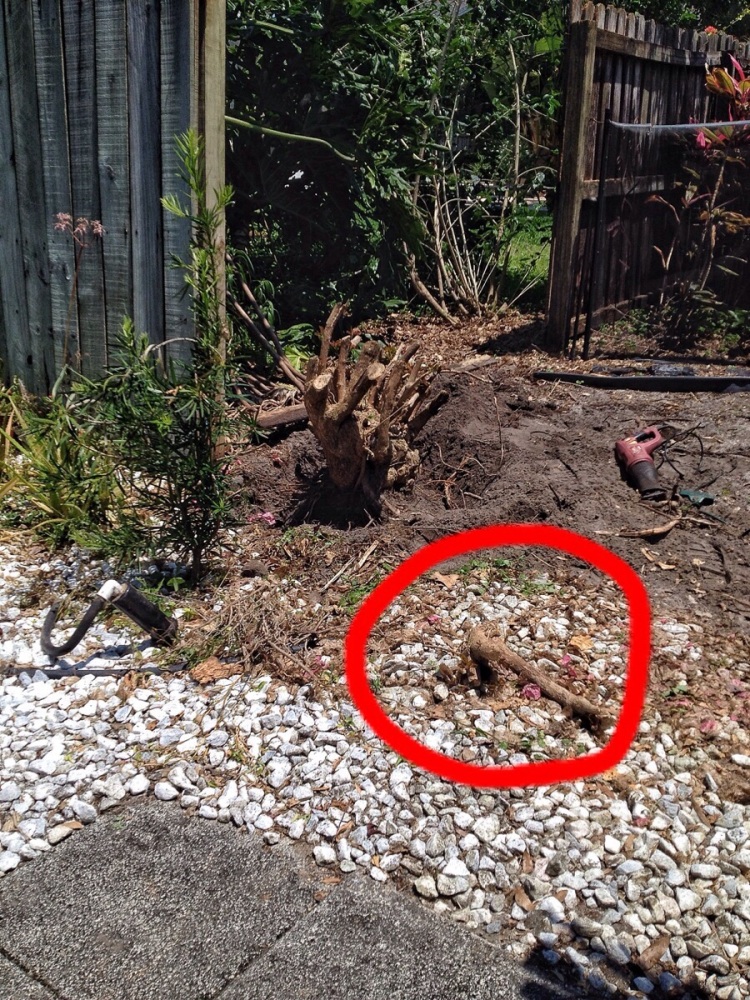 That looks like a little, potential tree.
In fact, Benjamin, Diane’s young son, and a budding bonsai artist himself, took that piece and is going to turn it into a tree.
He has his own blog and he did a short write up on it and you can check it out here.
But for me, right then, it’s back into the sun I guess.
The tools I brought:
My special made collecting shovel- 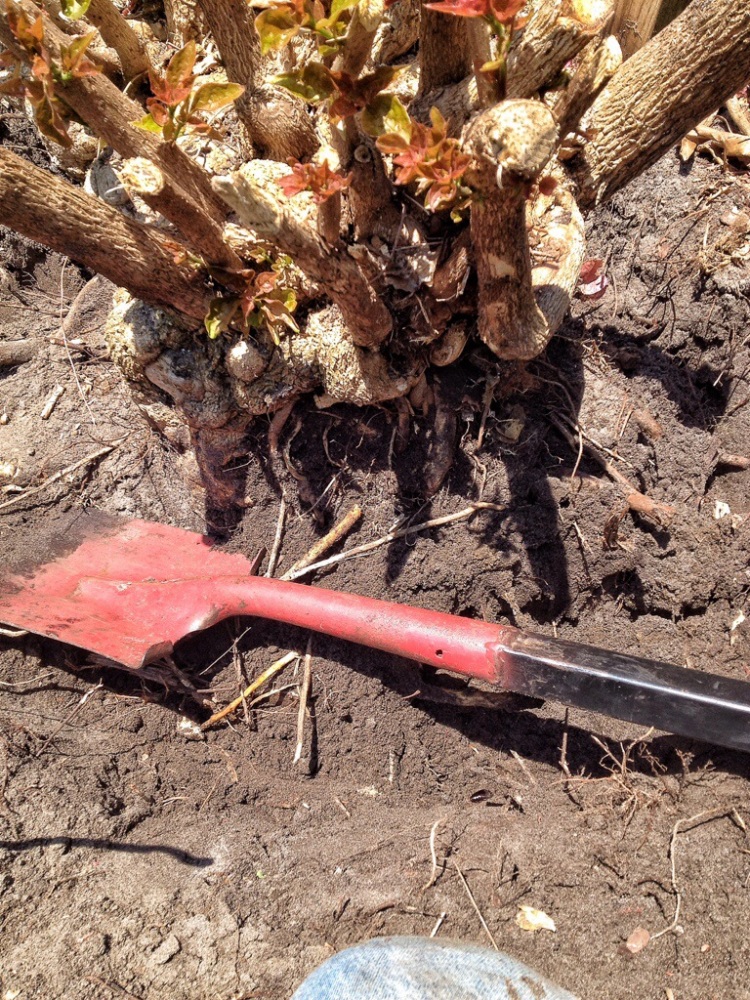 Which is a short, flat-edged shovel that I sharpened the edge and has a strong metal handle that I welded on to give weight.
Completely useless here of course, these roots are way to big.
There’s no easy this day.
It’s the hand saw for me. 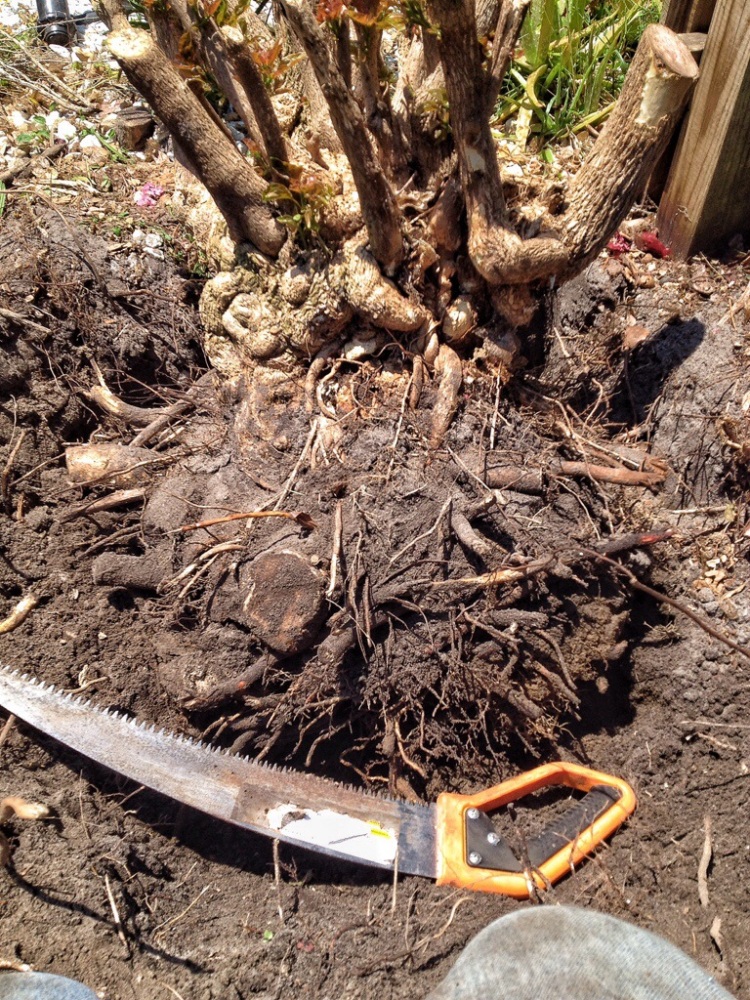 In the sun.
Wait a minute, you say, you saw the reciprocating saw in one shot.
I couldn’t find my long blade, and six inches just isn’t enough sometimes.
I had to hand dig the dirt away from each root and then saw them apart.
I did have a crooked little hand trowel I borrowed from Scott, Diane’s husband.
It’s his lucky shovel, and mine too on that day. 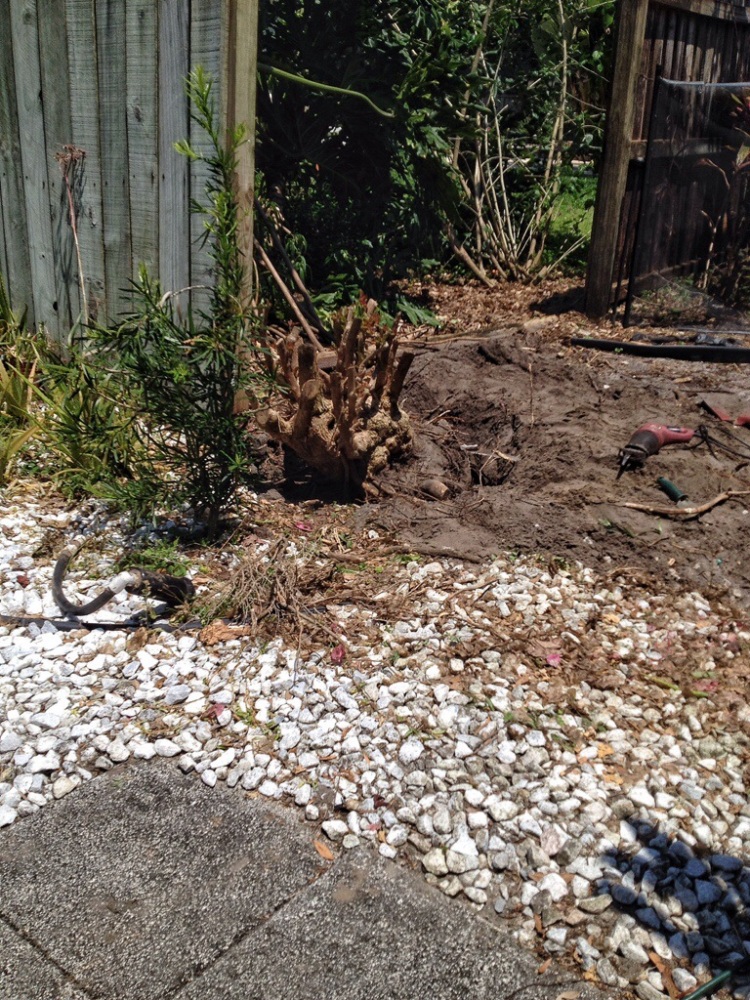 Yeah, that’s right, I’m in the shade again.
I’m halfway done in this shot. I think. I hoped. 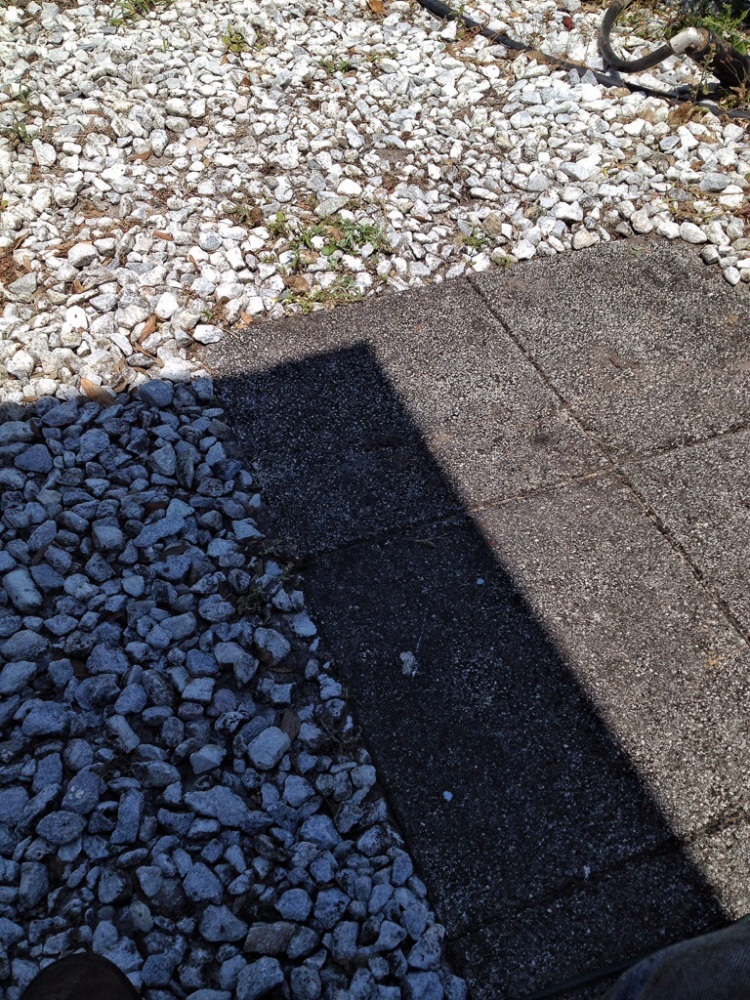 It’s a big difference between sitting on the ground in the sun and resting in the shade.
In fact, I put myself upon a pedestal.
Here it is, the pedestal I am resting my butt on. 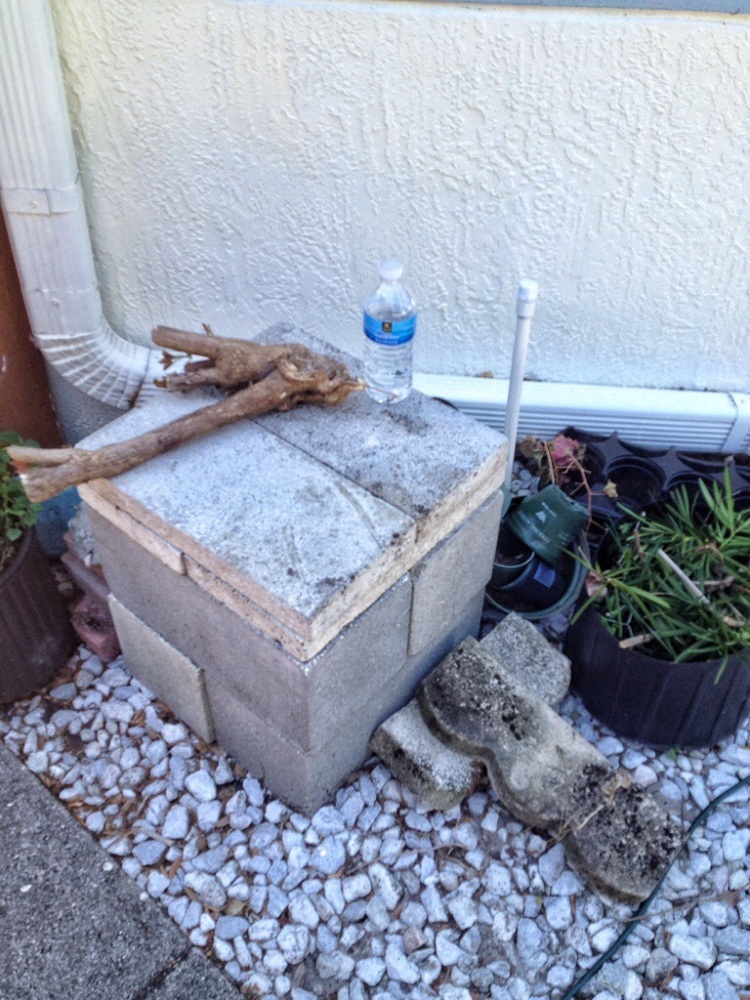 Fitting, eh?
Some people think I’m Prima Donna anyway and that my head is too big.
They might be right, working in that sun, my head feels like it’s gonna explode.
Let me pass out for a bit, I’ll be back in a minute…….
Sorry, back to work. 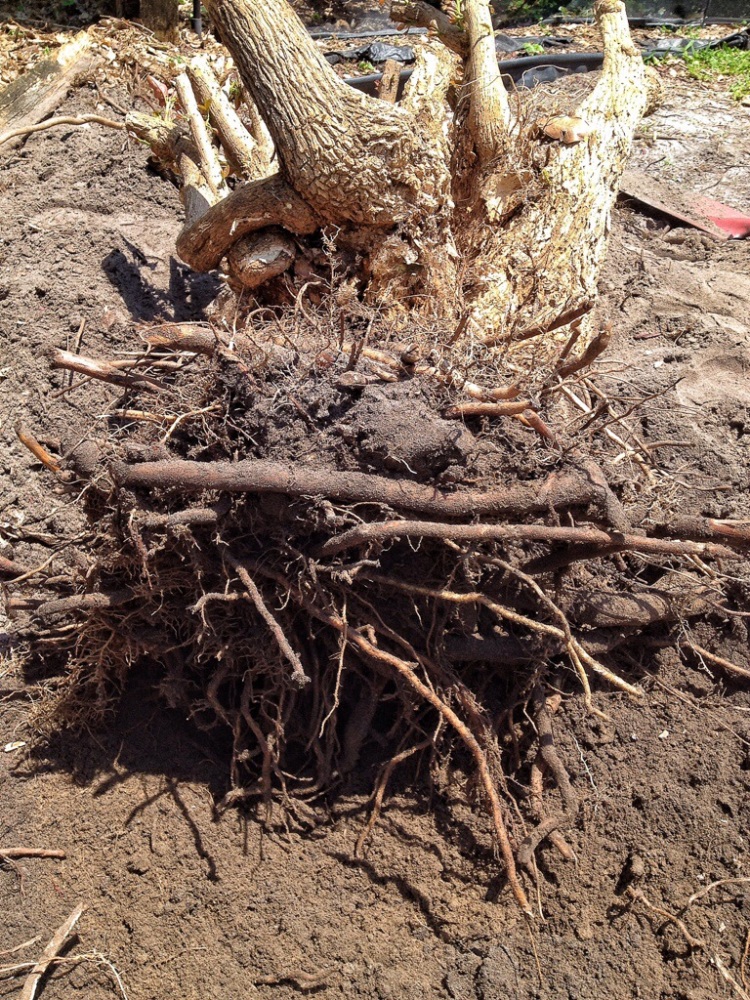 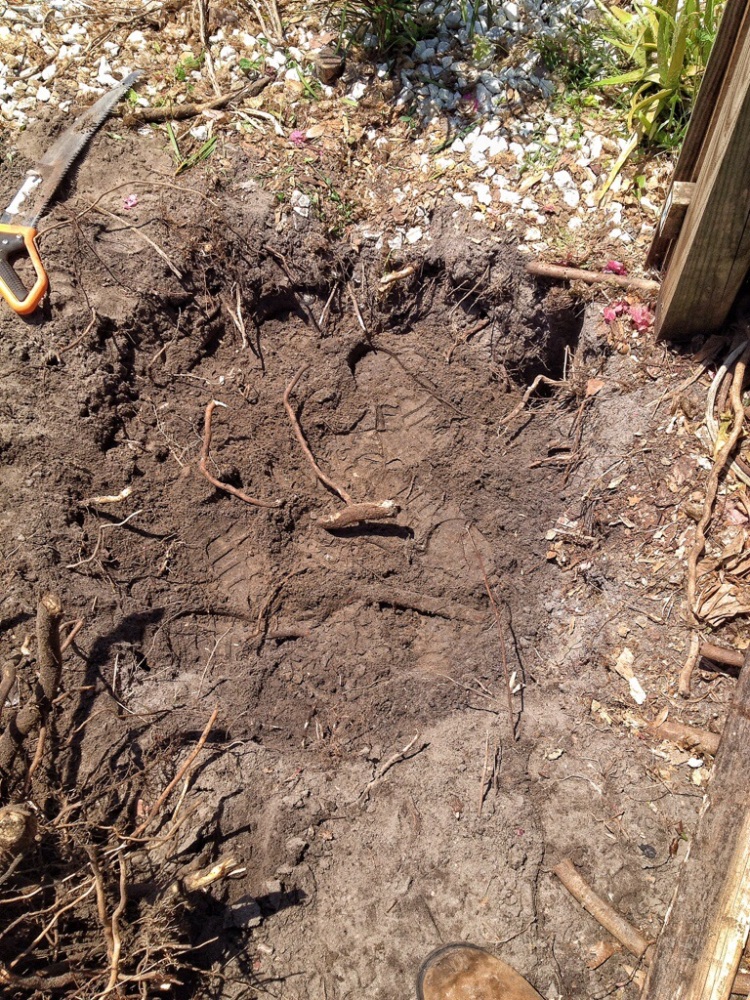 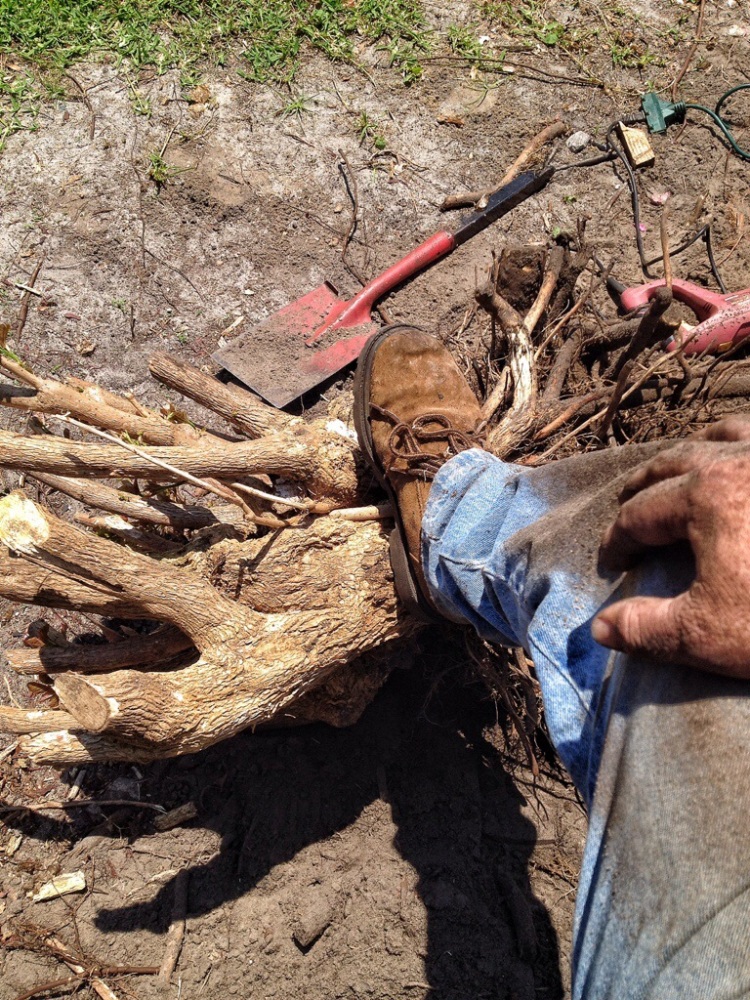 But the victory is short lived.
I start to wilt again. 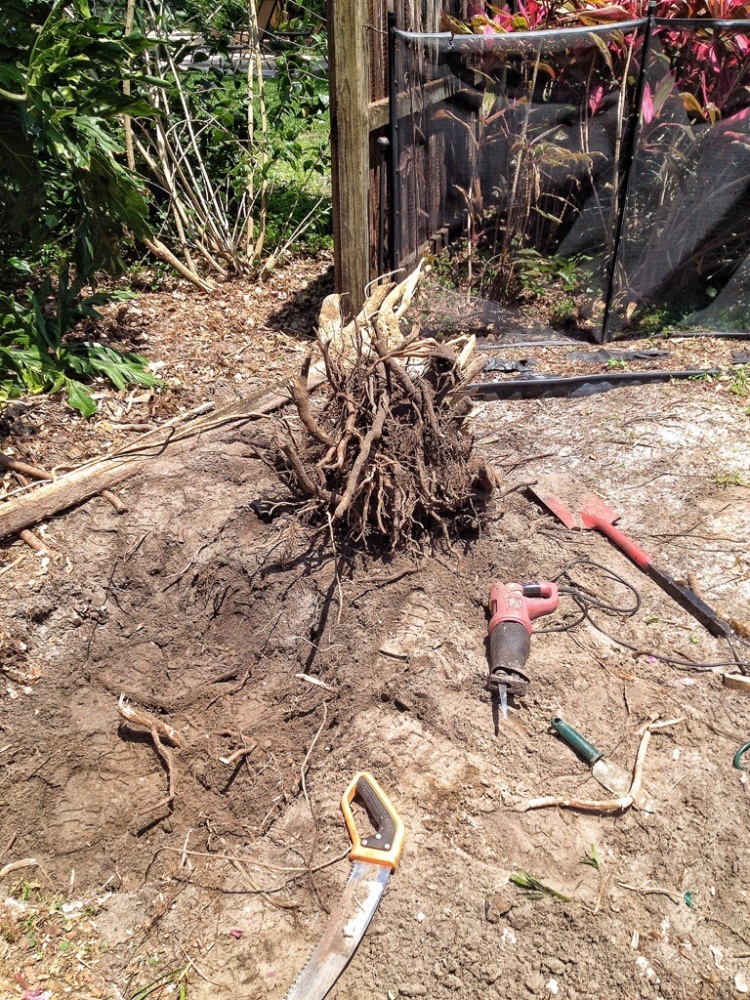 I have to drag this beast to the van, clean up my tools, and fill in the hole.
The best part is that all the branches have been removed and gotten rid of by the owner the other day.
Yippee!
The biggest hassle is getting rid of the tops of the trees we dig up. If I had to do that this would take me half a day.
Thank the bonsai gods!
With the help of a little handcart supplied by the property owner (and with much encouragement from Diane) I drag the tree the 30 yards to the van.
It just fits inside. 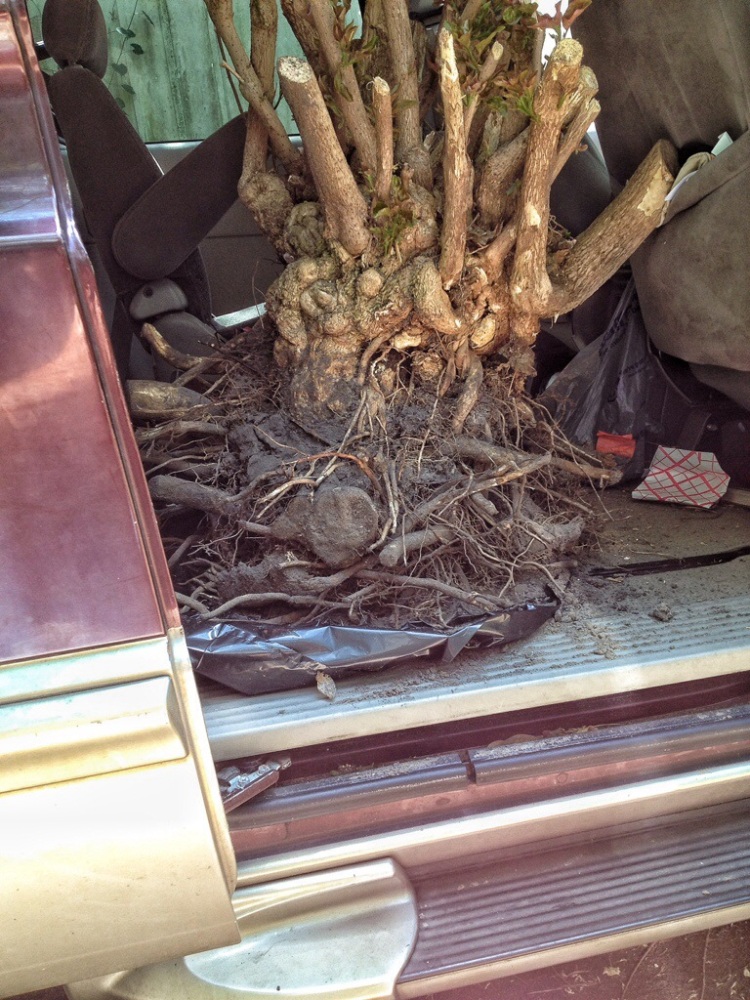 Of course, when I get home (and after a quick lunch) I have to move the beast alone.
But, I do have my wagon and many thanks to Steve for it for Christmas. 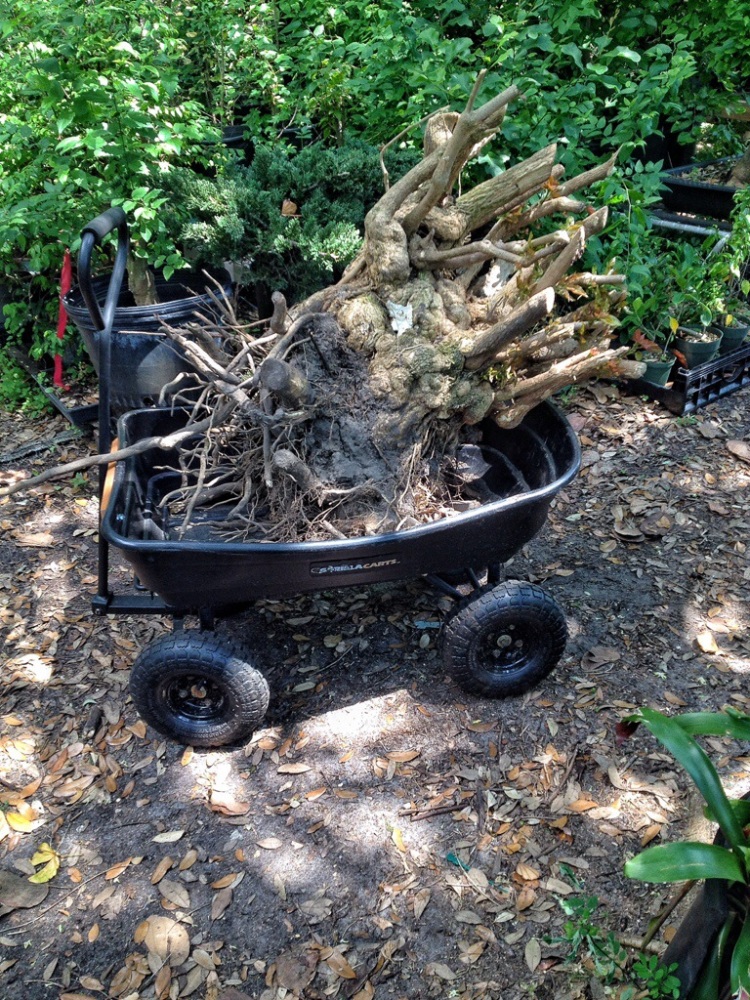 A water bottle to give you an idea of how big this tree actually is. 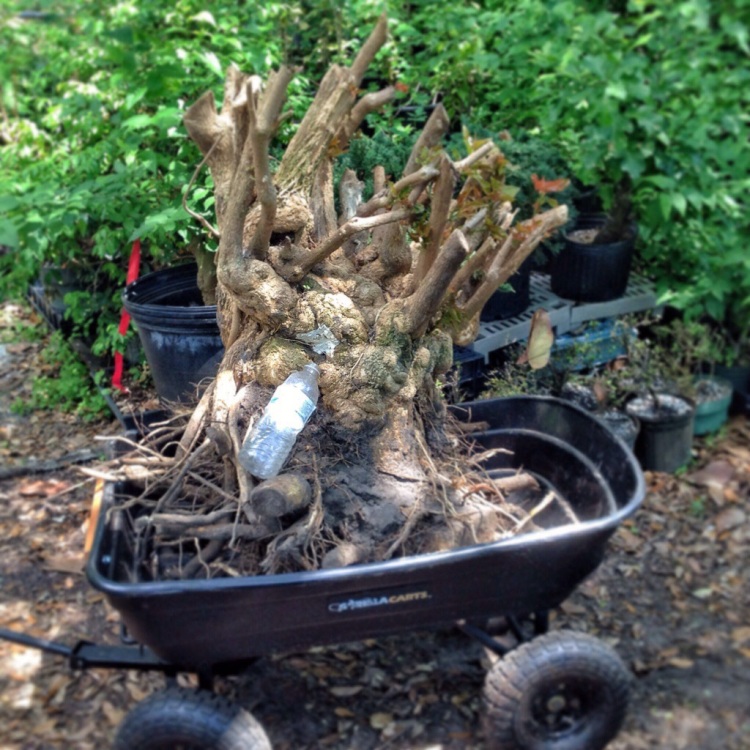 Now, more work (you thought collecting was easy, no way. At least I’m in the shade now).
First, the container; a cement mixing tub from The Home Depot.
The larger one available.
And about 15 gallons of soil.
I could use straight bonsai soil but you do the math. 15 gallons, my friends. 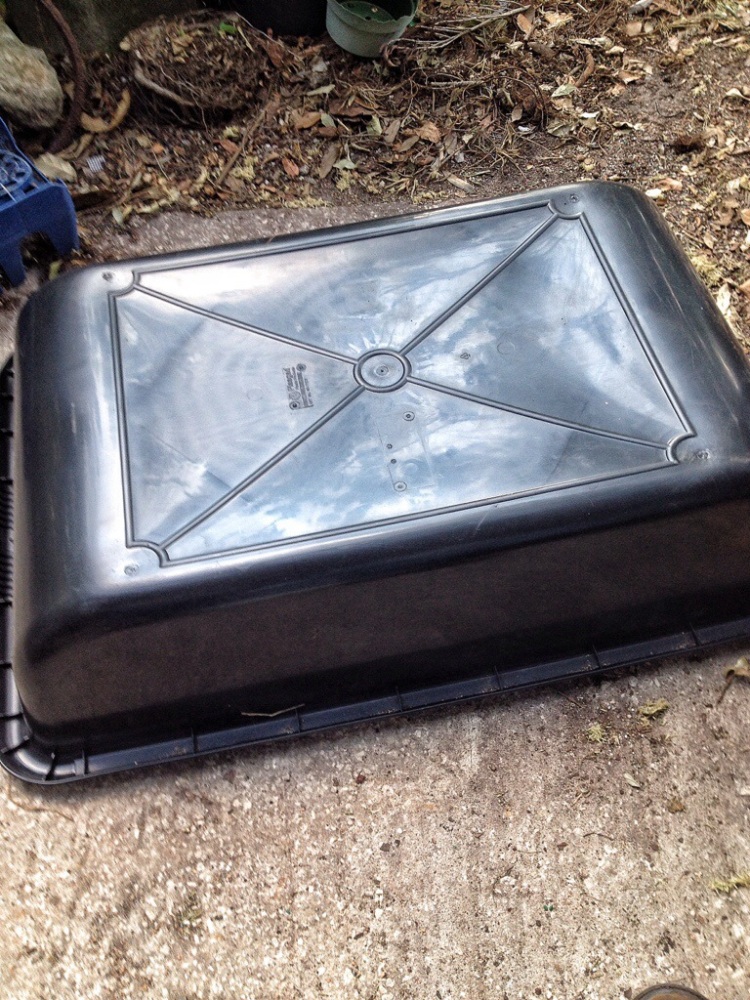 Drill some one inch holes. 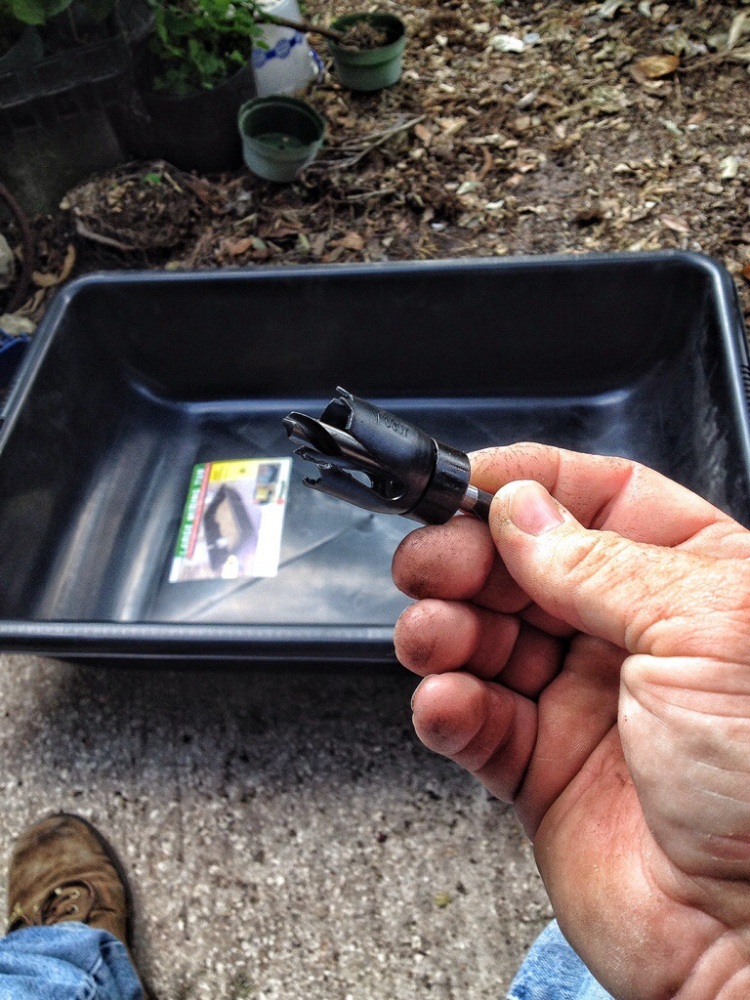 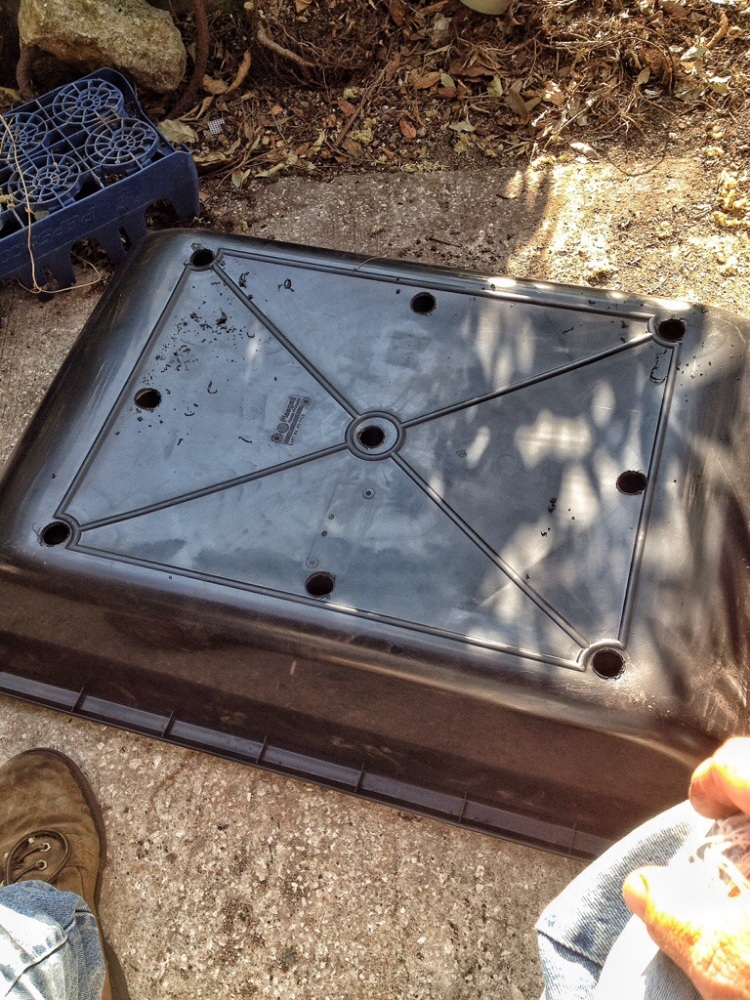 And some fiberglass mesh to cover the holes. 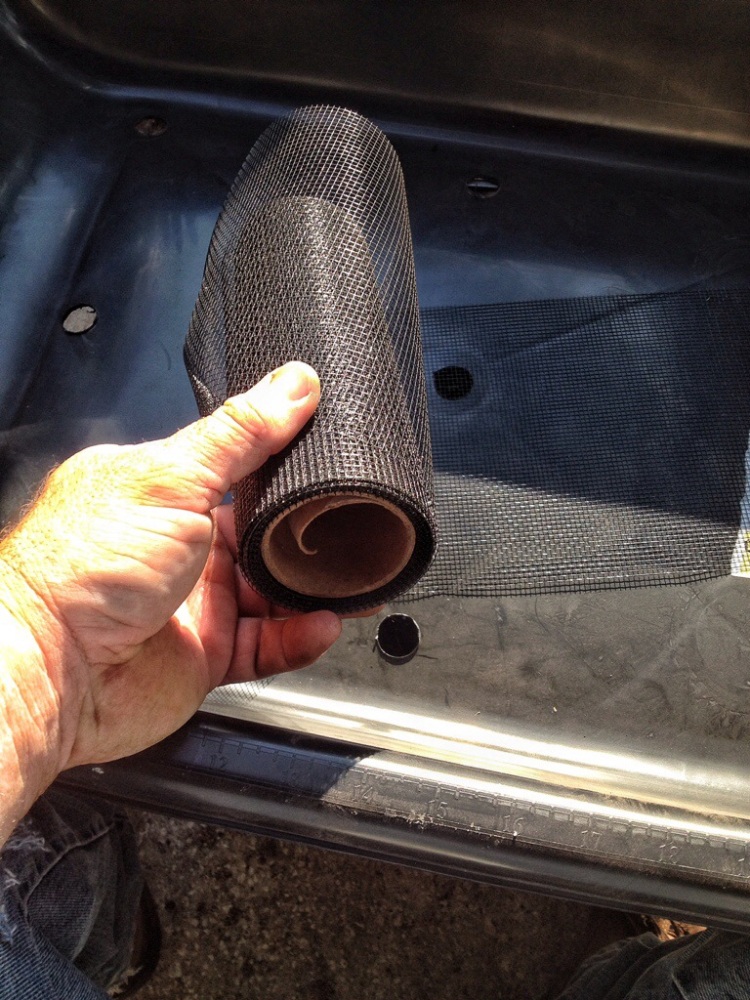 And the best bit of advice I can give you when working big trees.
Put the pot where you will be keeping it, because, when you fill it with soil and then the tree, it ain’t movin’!
I still need to trim the roots and cut the top back a little more.
If you are collecting a bougie, make sure that you wash out all the dirt from the roots. If you don’t, the tree will stay too wet and all those cut ends will start to rot, sure as the rain. 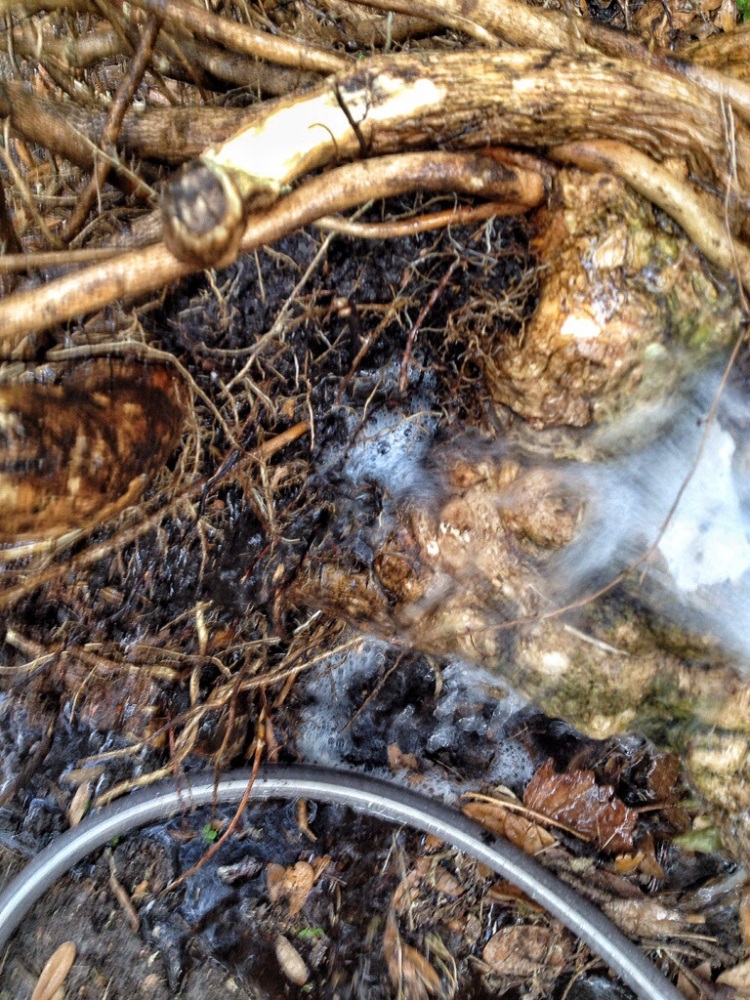 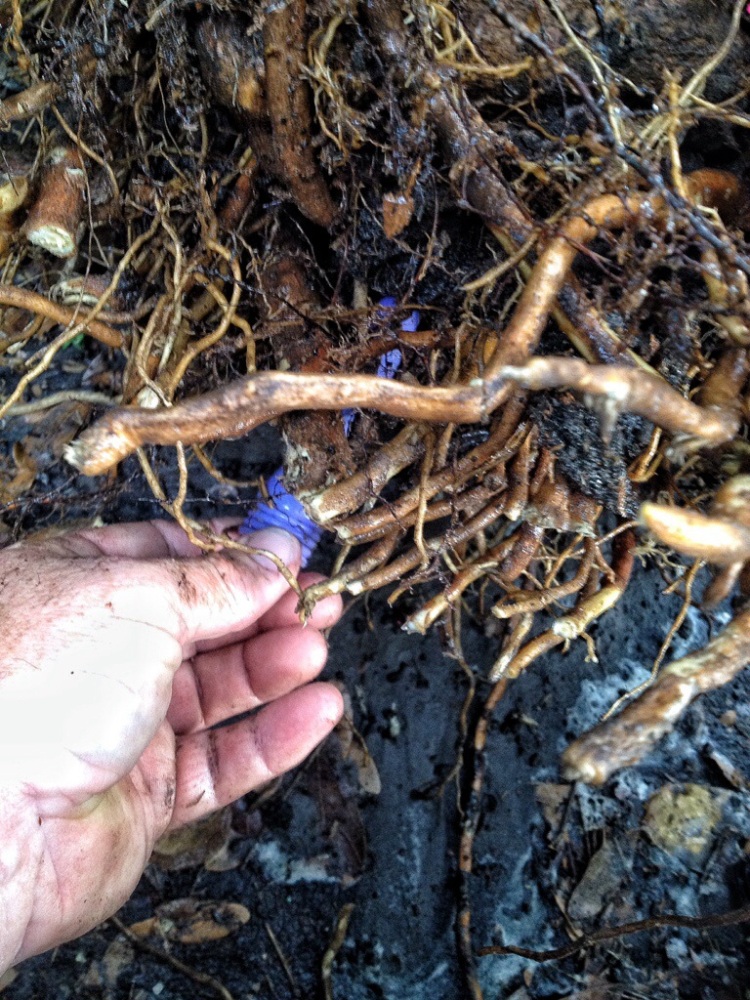 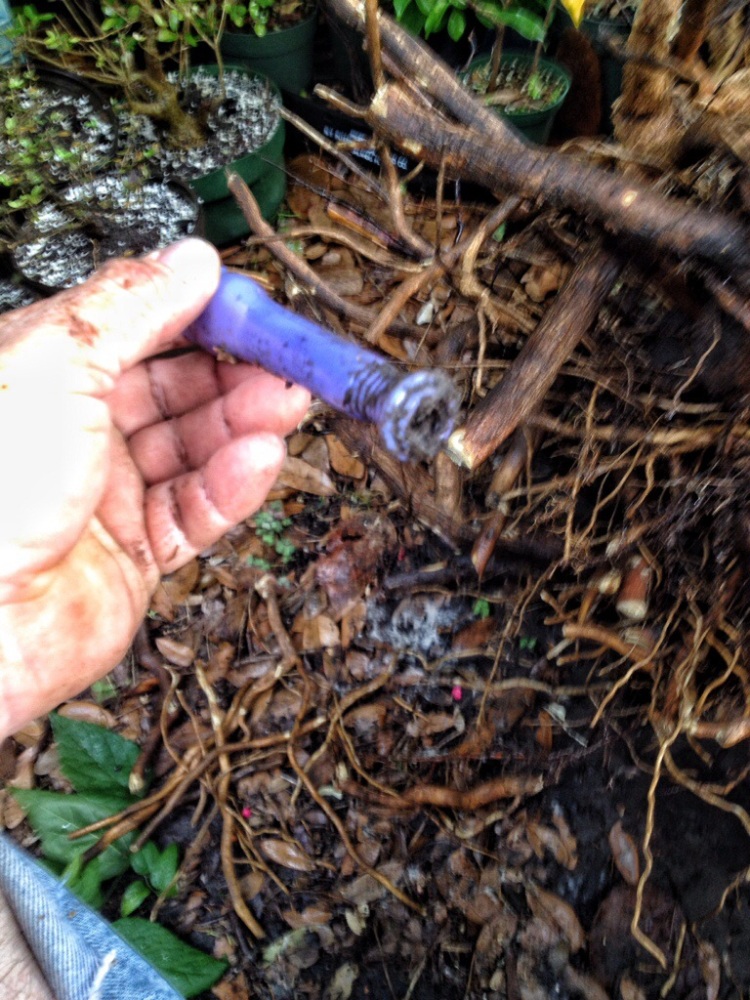 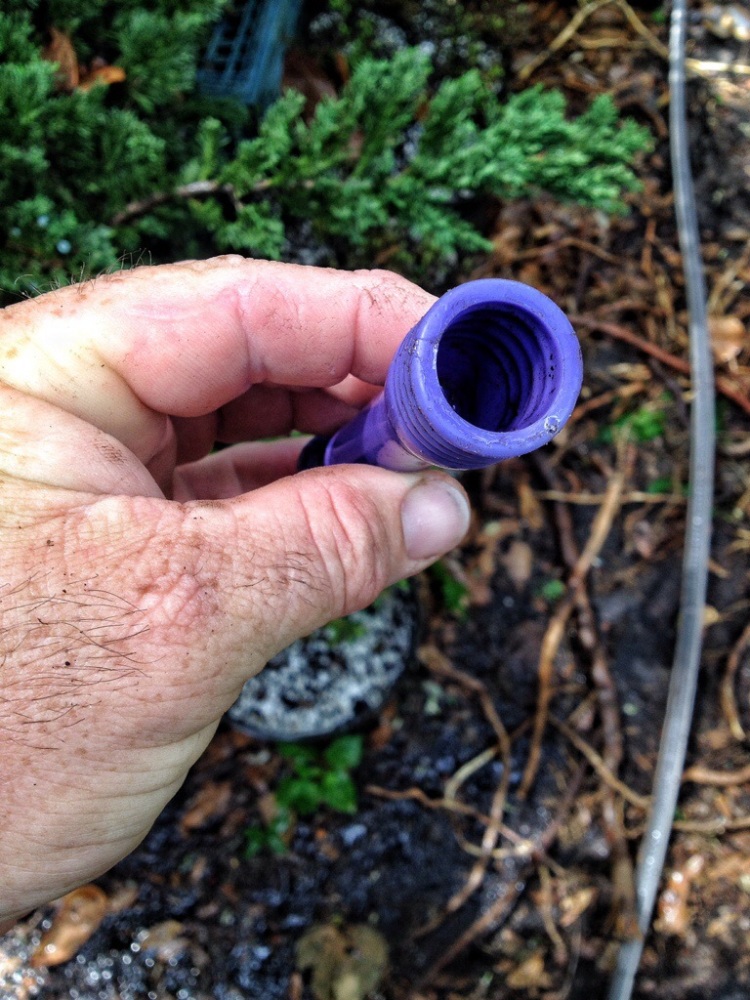 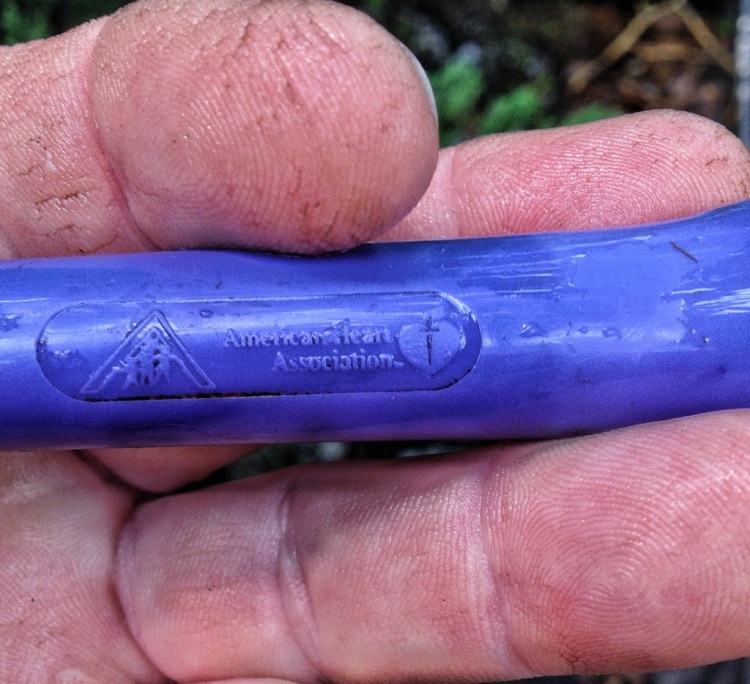 I wasn’t expecting the American Heart Association.
Maybe Adam & Eve but not the AHA.
Anyone have any idea what this is?
It’s been buried for almost 20 years.
It’s like an artifact, and me an archaeologist.
Dum da dum daaa, dum da da!
We named the dog Indy….
As for the top, it was just cut back, I didn’t really choose any branches or try to style it. There’s really nothing there anyway, I’ll have to let it grow a few years anyway.
This was how I found it, just as the homeowner chopped it back. 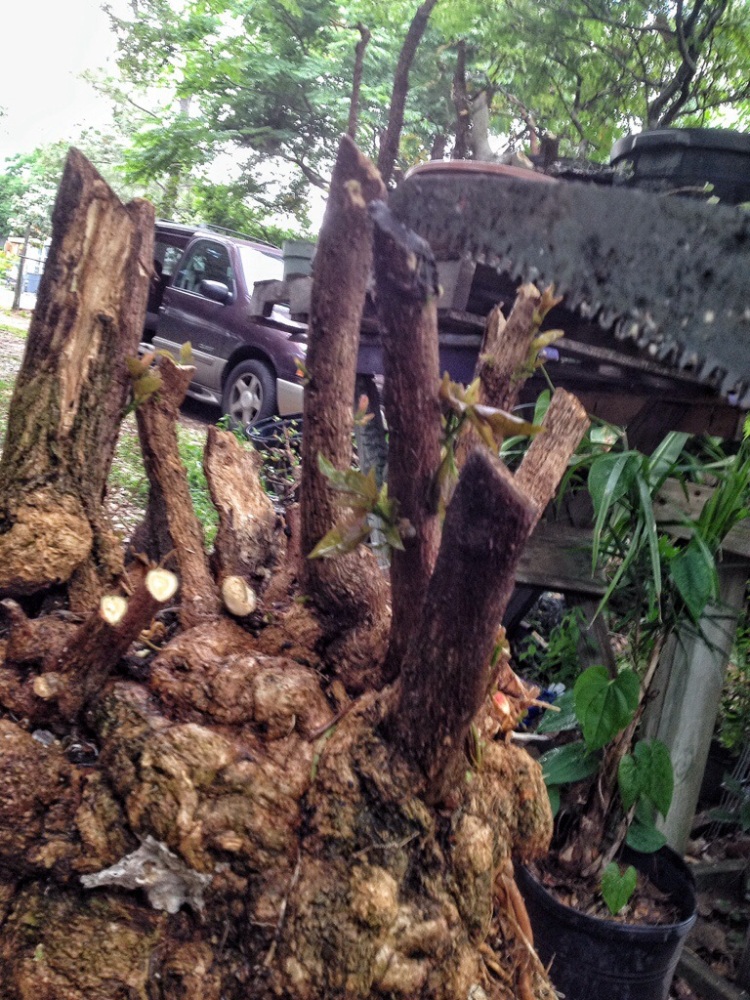 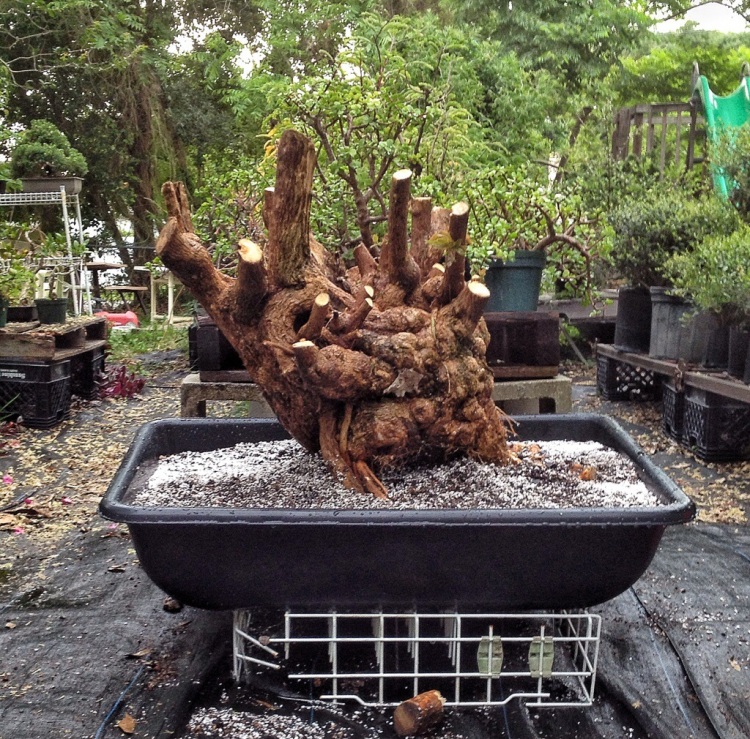 The soil mix is 1/2 perlite and 1/2 regular potting soil (heavy pine bark, light peat).
It drains very well, almost instantly.
Which,as I said, is important with a bougie.
Lastly, as I have it potted now, it’s not the front.
Anyone who has collected knows that sometimes you have to try you’re best fit the tree in the container you have because you aren’t able cut off a root just quite yet, which is the case here.
I suspect the front is kinda in this general area. 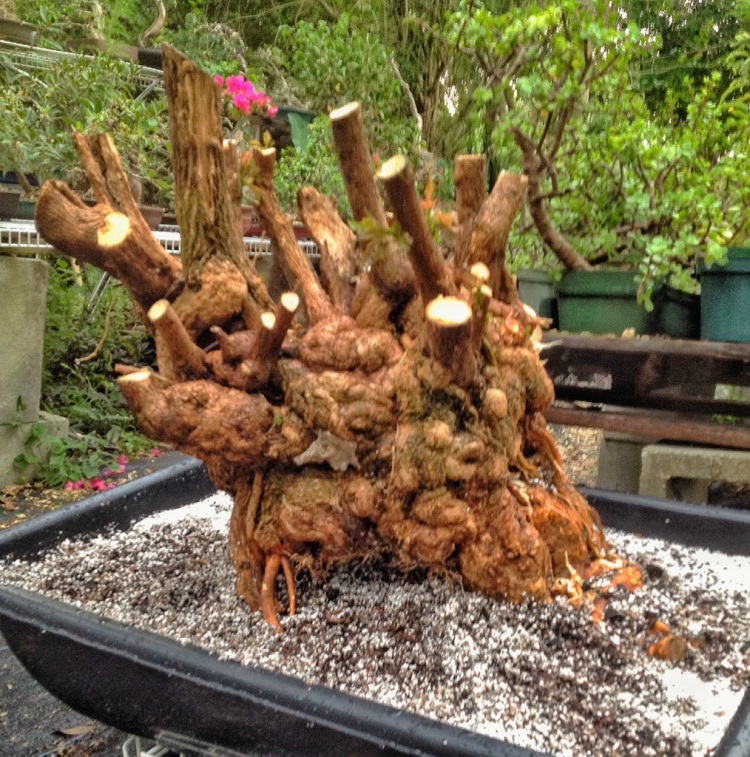 Anyway, time will tell.
And speaking of time, it’s time for a nap, I think….wait…what time is it? Damn, gotta get the kids from school.
No rest for the wicked today.