That’s right, it’s like the 19th century for children in my nursery. Not only do I force my own children to pull weeds in the midday Florida heat, repotting ficus after ficus, and trimming thorny bougainvilleas without gloves, I have found a way to exploit a loophole in the State of Florida Orphanage and Child Work System. I can use parentless children for farm labor and, get this,  they pay me to do it! And you should see what happens when the plucky ones ask for more gruel. It’s off to the un-wiring shed for them where the task of removing the miles of wire I’ve put on my trees is removed. This is Benjamin, one more bit of backtalk and it’s weeding with chopsticks for him.

Actually, it was out of his neighbors yard where I dug out the main subject of this article, a bougainvillea (which was chronicled in This Post). He brought a Brazilian Raintree to work on as well. I, of course, told him to defoliate it and cut off the thorns.

Then we cut it back and wired it.

Then, because it’s too late in the year to cut back the roots too much, we up-potted it into a slightly larger pot. 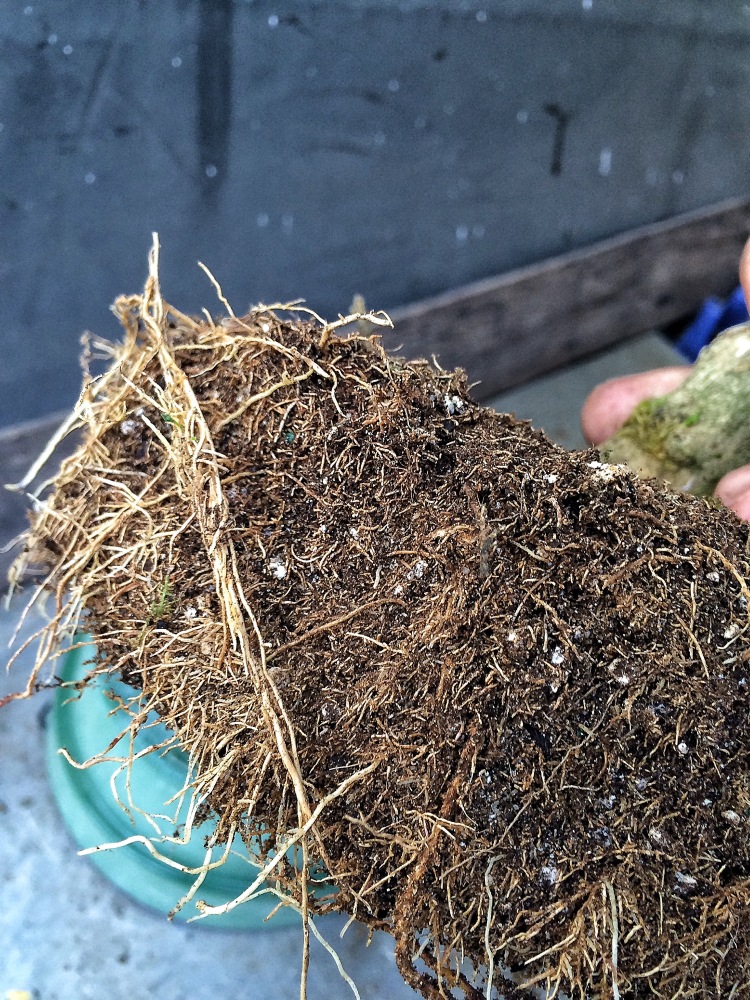 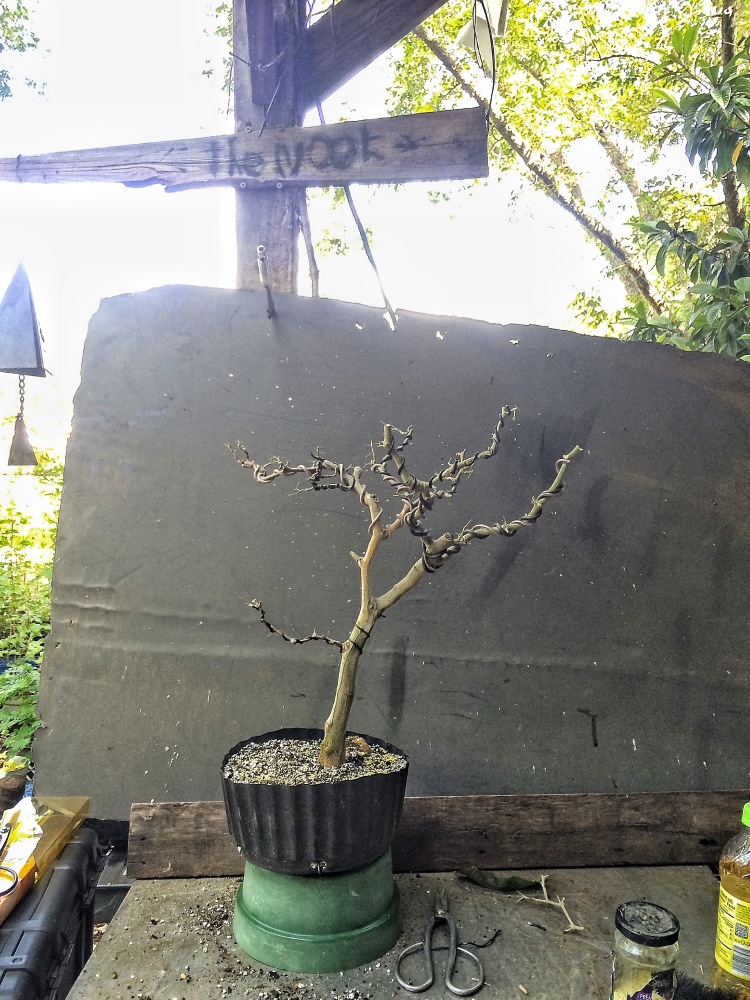 It’s in a flattop style. But enough about his tree, he has his own Blog, go check it out. Btw, he’s only 14 yrs of age. He’s not an orphan but, as many kids his age, I bet that, at times, he wishes he was.

Here’s the tree we are working on today.

Here’s how it looked last time you saw it. 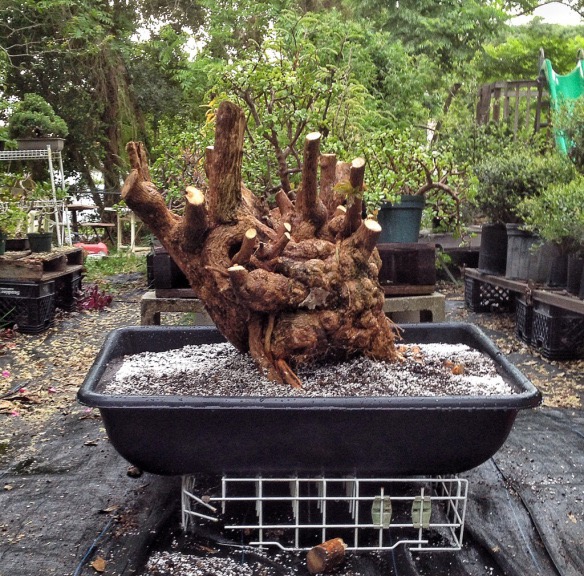 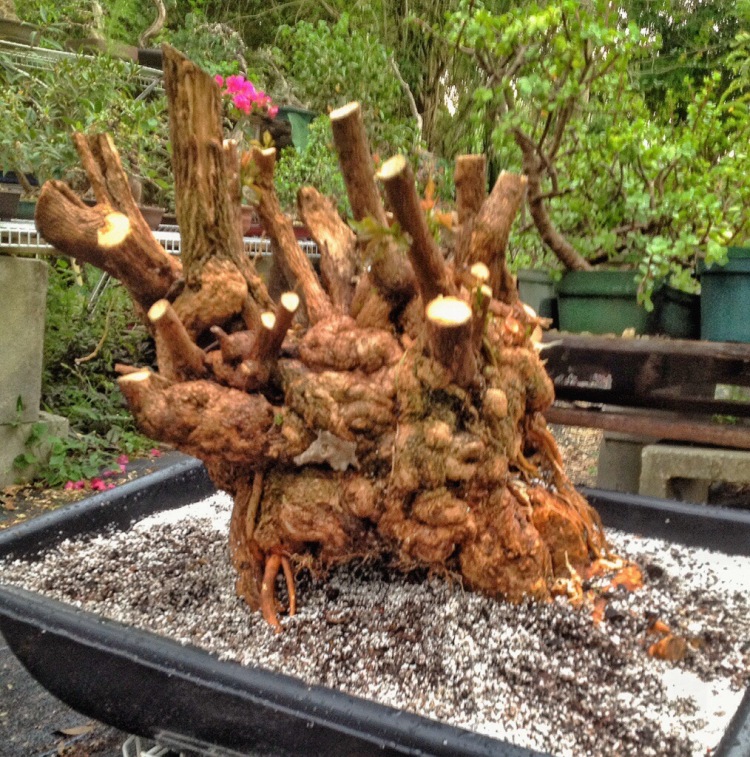 Today’s task is to cut it back to a line, and put it into this pot:

And use this soil.

There should be enough. Hopefully. Let’s get to work and see what’s happening.

Well, it seems like there was some dieback. There’s some kind of fungus among us. 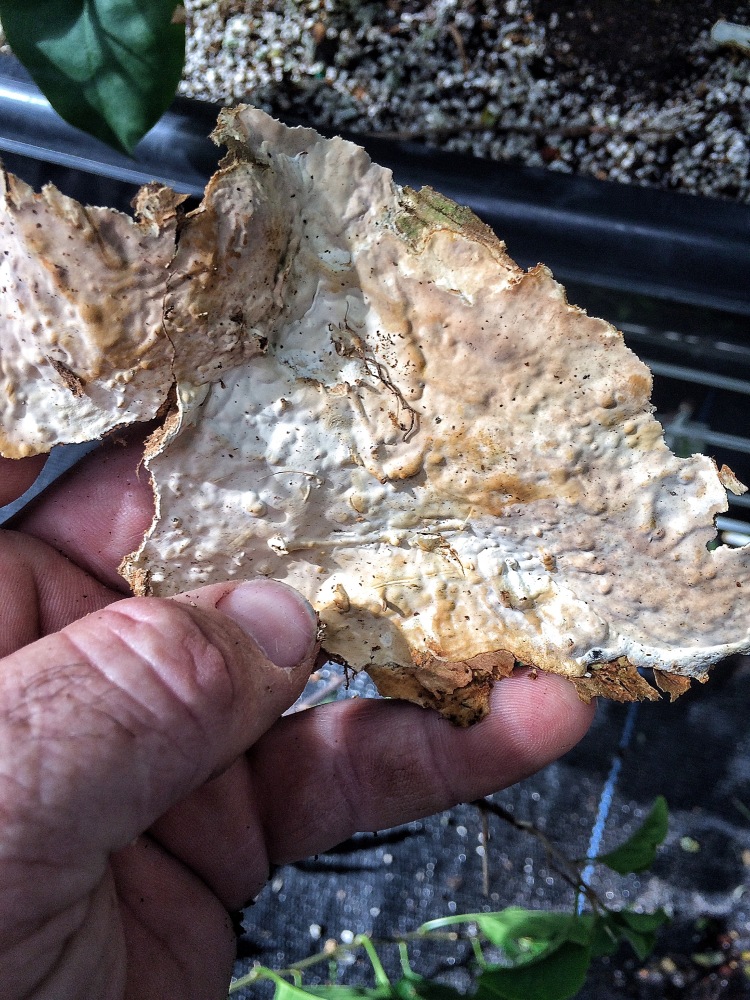 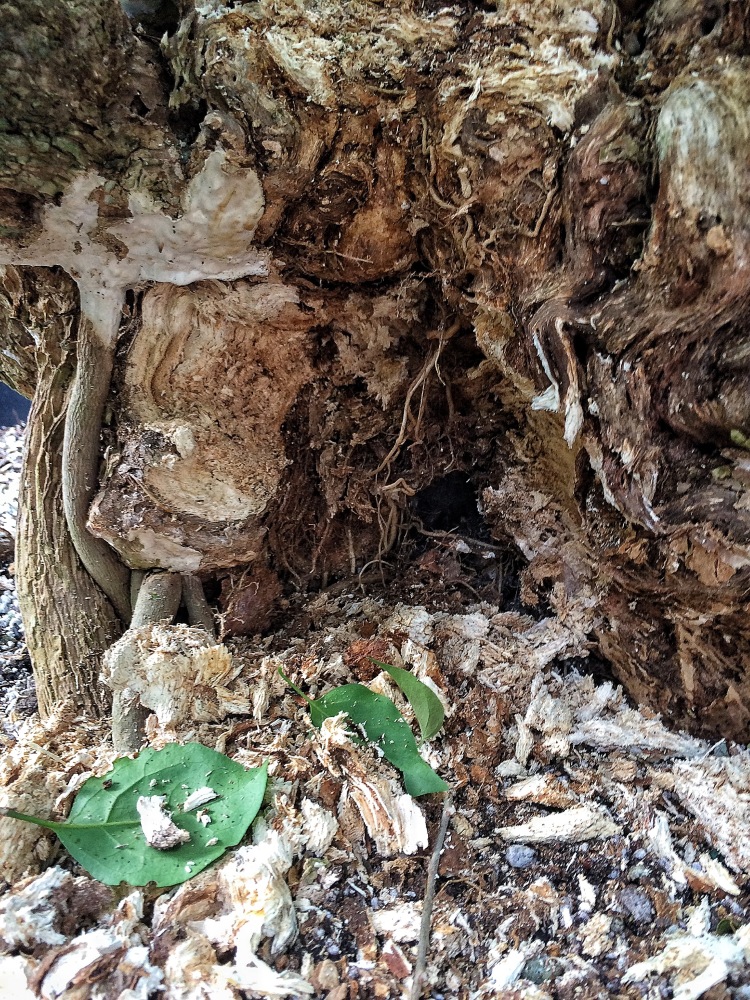 Ok, we can deal with that. It’ll give it character. Just a little rot.

When they sell these trees, the grower tends to stick four, five or six plants in one pot, and as they get older they almost fuse.  But when one dies back, it tends to take a whole section with it.  Kinda like this. 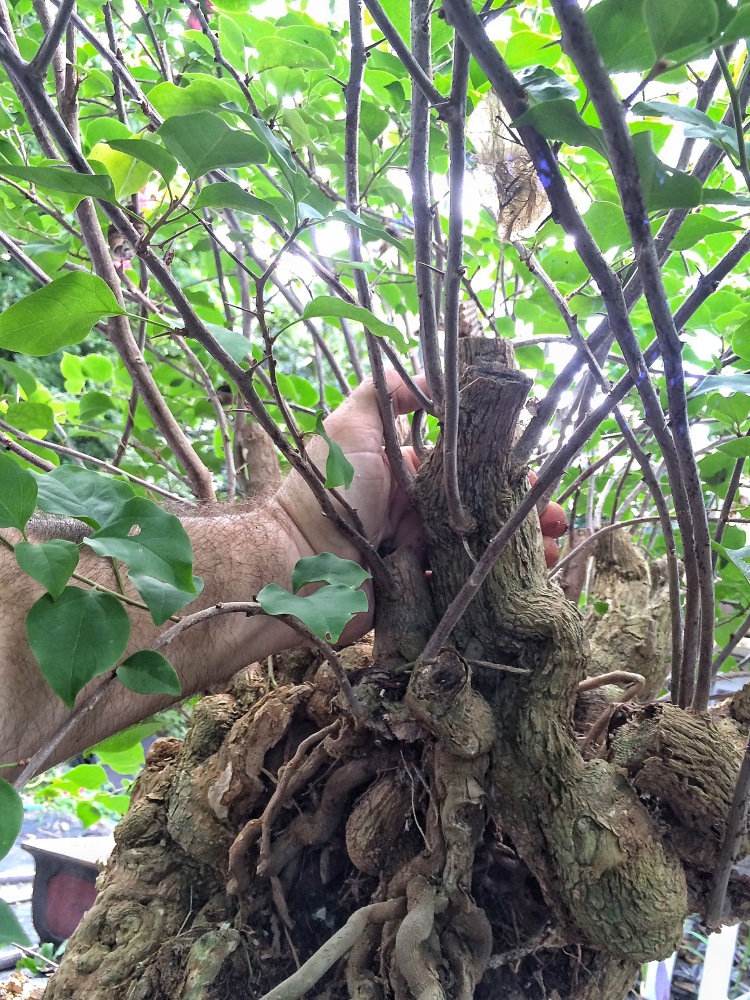 This is one “tree”. The bottom mostly died back but it threw roots through the rotted area and re-rooted in the soil. But it’s not stable. We shall rip it out, methinks. 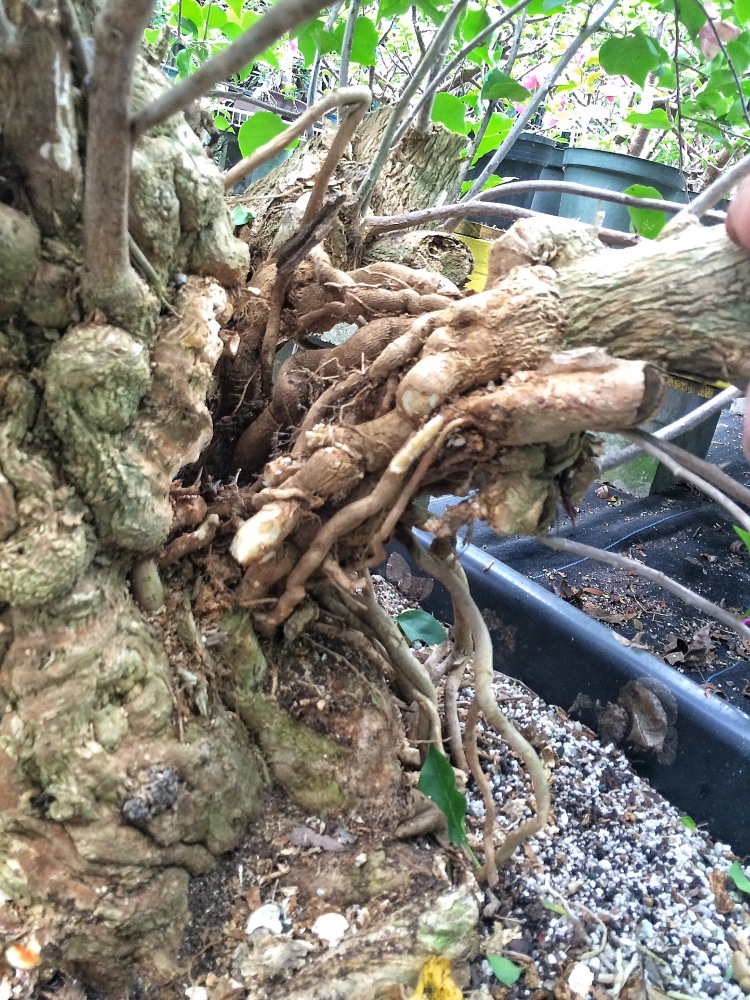 There we go, that’ll be a cool tree by itself. 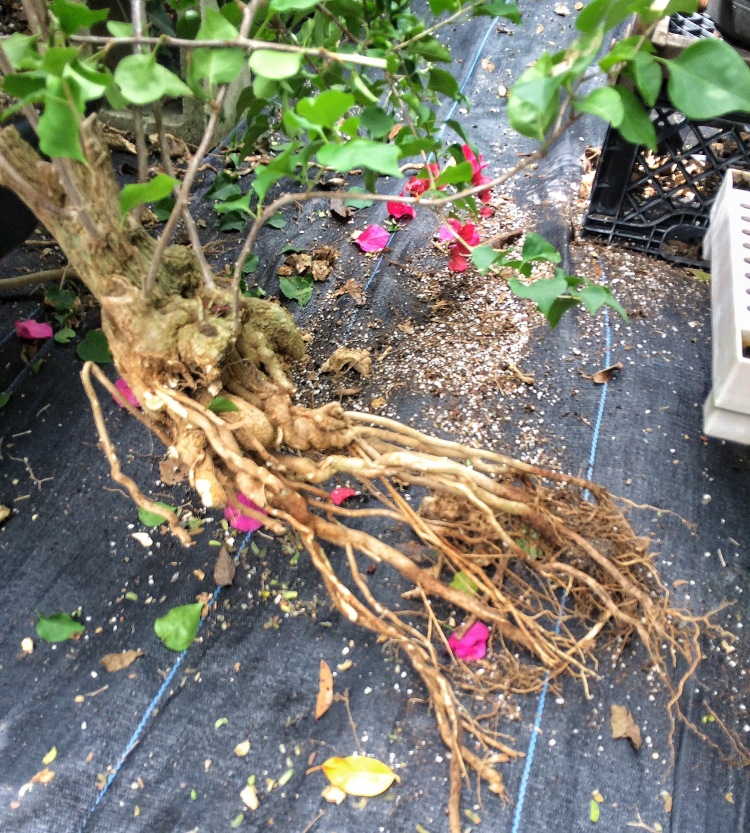 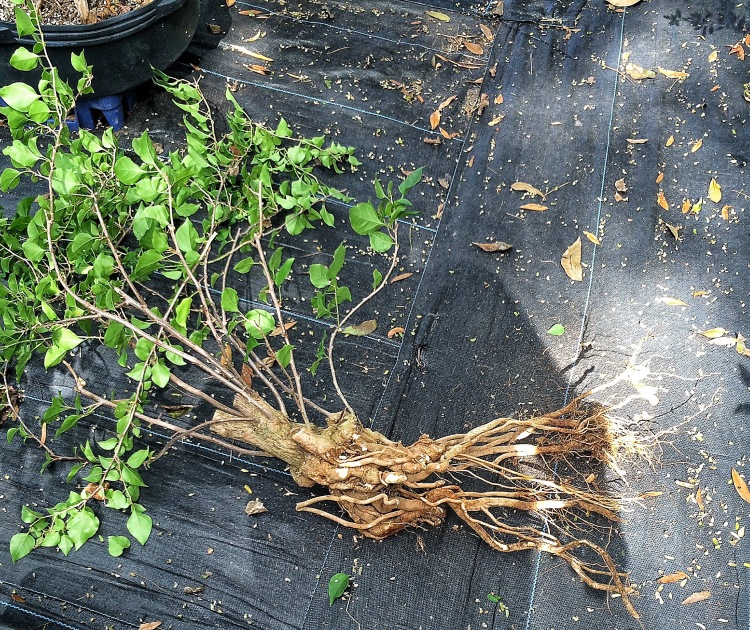 Looks like the Sentinel robot from The Matrix. And the hole left over looks like I just extracted a tooth.

Next I begin- The Prune. 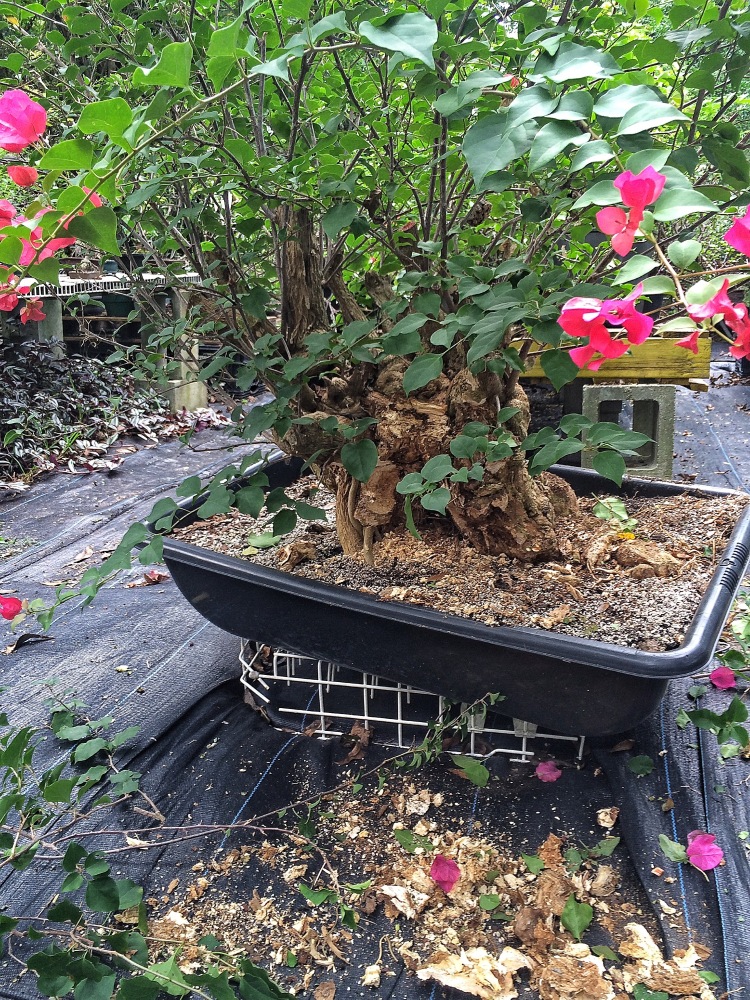 Benjamin was able to sneak a few pics of me.

I don’t like too many pics of myself on the blog, I might start getting panties in the mail and, it’s easy to say that my wife wouldn’t like that at all. But look at that forearm and the wavy hair. Those broad shoulders……

Anyway, here’s the tree,  cut back.

Now to figure out the front. 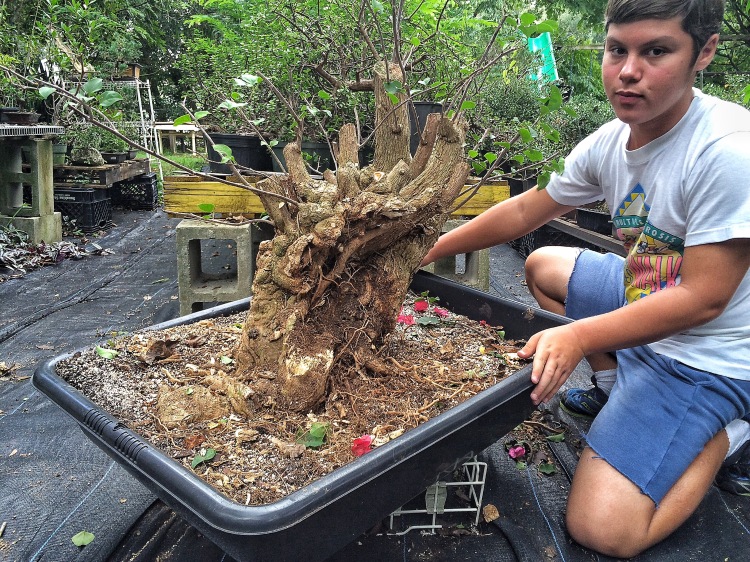 This side might look good in the flat world of the Internet. 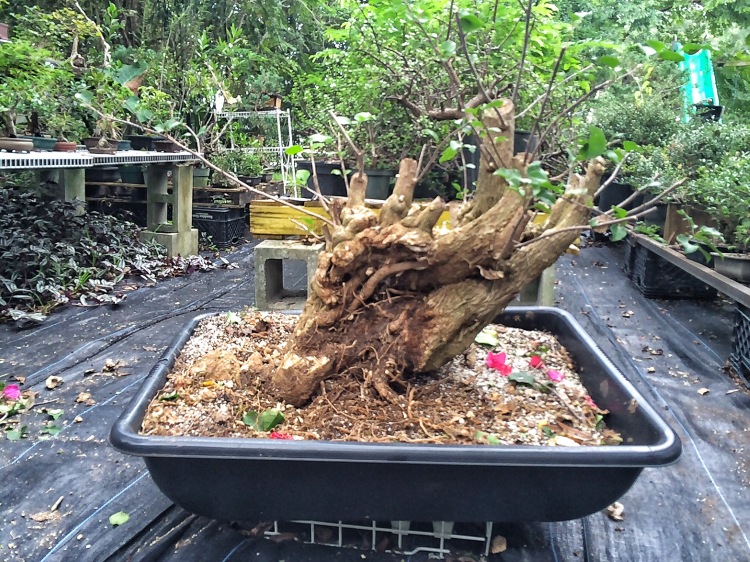 But the branching doesn’t support it.

Everything is going back. So, it’s the other side.  Will it fit?

We gently rake out the roots, keeping as much as we can

It just about fits.

We need to rotate it ever so slightly though so, out comes the big boy saw.

Ah, that’s better.  A tree this big, with the amount of roots it had, needs a lot of chopsticking

Now it’s all done except for the fine styling.

Which can wait. I must say that I tend to ignore my bougies a bit too much. I don’t think I’ll ever get the ramification that Erik Wigert gets on his trees. And since I don’t have a good after pic, I’ll steal some of his. 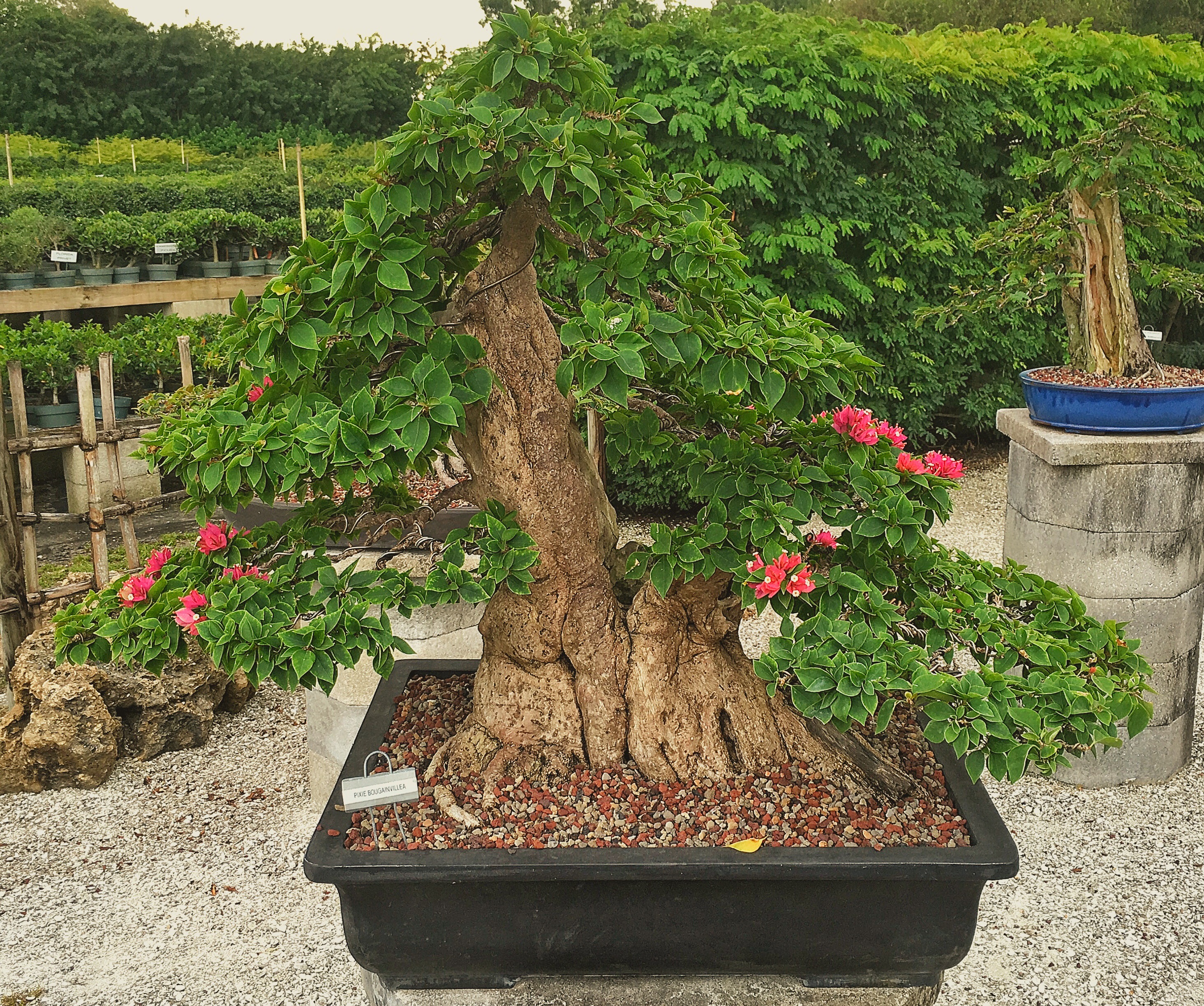 Now those are some bougies!
Erik is having his open house this weekend (November 7&8, in N. Ft. Myers, Fl). If you’re in town you should try to make it, it’s a free event and this year it features Marc Noelanders (of the famous Noelanders Trophy in Belgium).

Check out Erik’s website for more info (here’s the show schedule). Hope to see you there!

In the next post, I’ll revisit a tree I found just before I got sick last year. Let’s see how it’s been doing.