I had a mission. I had to deliver this big tree to Erik, who in turn will deliver it to Nathan, in California. 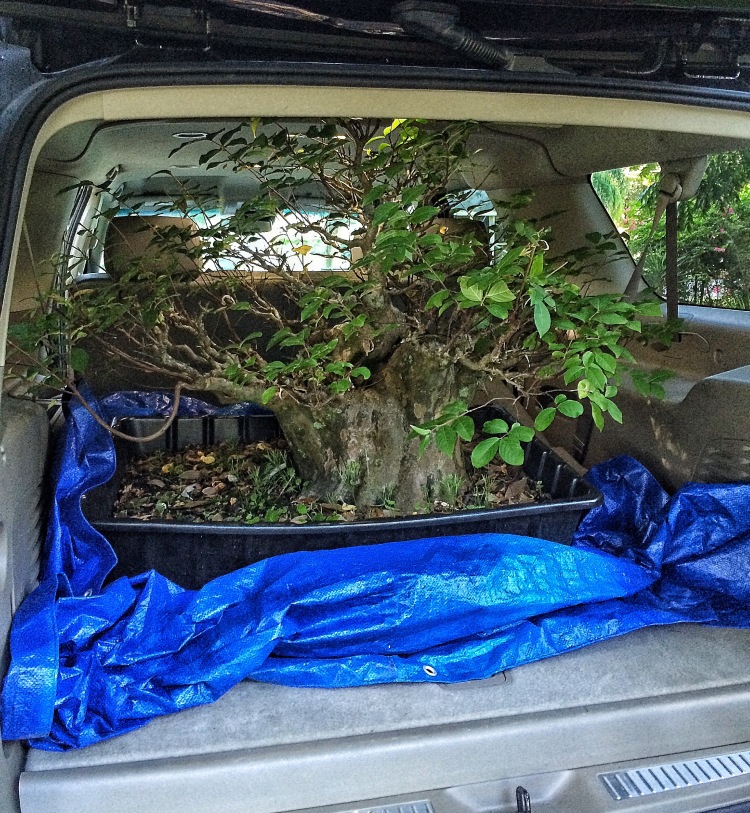 Let me tell you about its world and about Texas Radio and the Big Beat. It comes out of the Virginia swamps, cool and slow, with perfect precision. With a backbeat, narrow and hard to master. Sorry, click this YouTube link and you’ll understand that reference.

Here’s the story of the tree, it’s a crepe myrtle, a big crepe myrtle. My friend Ryan, or, as he is more popularly known as, The Mighty Thor, collected it one fine winter day.

That is indeed him and his wife. His YouTube handle is EveryDayThor. Here’s one of the best Videos he’s posted. If it were still stylish to say it, I would say that you will  “lol” after watching it. Or even rotflyao. I know I did.

Anyway, crepe myrtles are used often in the Florida landscape and this is a big one, as I might have said already. Ryan developed it for years. Then he gave it to me; he wasn’t able to take care of it, with all his traveling and superhero-ing.  I couldn’t take it and keep it though. I told him I’d take care of it until he could again, or we found a buyer. Then, after the alien invasion was thwarted and his half brother was imprisoned, he was able to take it back. It’s been a few years but he finally found a buyer. In California. But Ryan had no way to ship it. So it went to Schley’s Nursery in Deland and then back to me and then, from my nursery, I was to take it to Wigert’s. Erik is driving to California next spring, to deliver it to Nathan. Seems convoluted but it’s simple really. And the excuse for taking the tre was the 2015 Wigert’s Bonsai open house.

The pic above is from Wigert’s Bonsai’s Facebook page. I’ve stolen quite a few pics from there for this post. That’s the tree Marc will do a demo on.

I drove down with my friend from Cincy, Evan.

I had two stops (plus that tiki man to deliver) before the open house. First, an initial consultation with Marty involving building a landscape scene with this house-

Which should be interesting.
And then I had  a private carving session with Mike. He had lots of trees. This is just one, his sea hibiscus that needed some serious work. 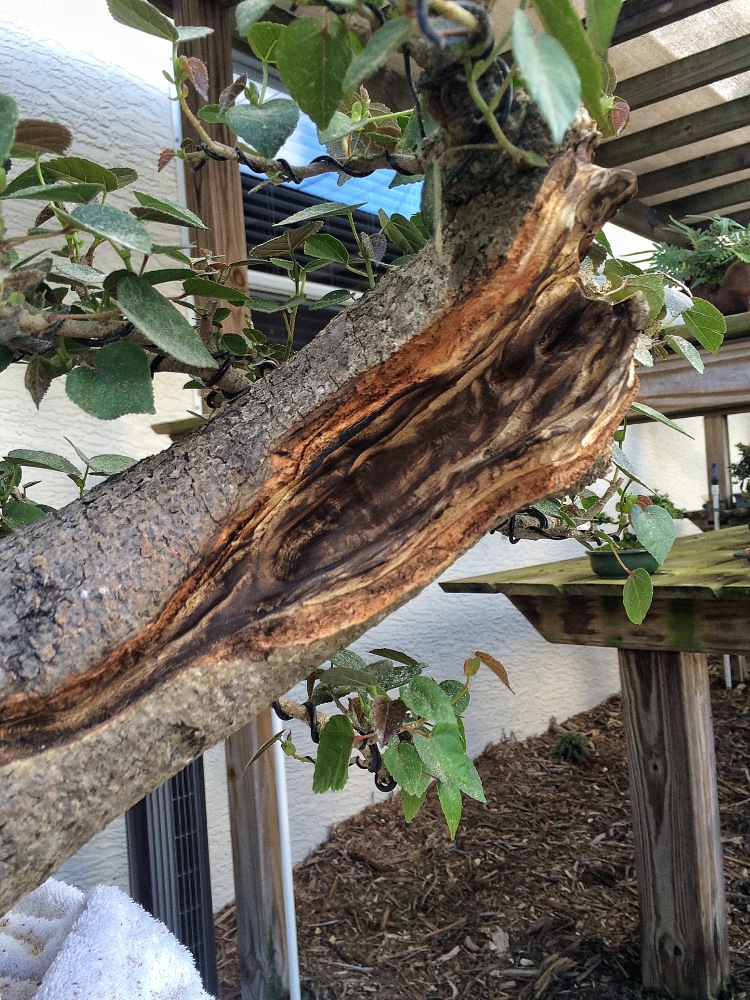 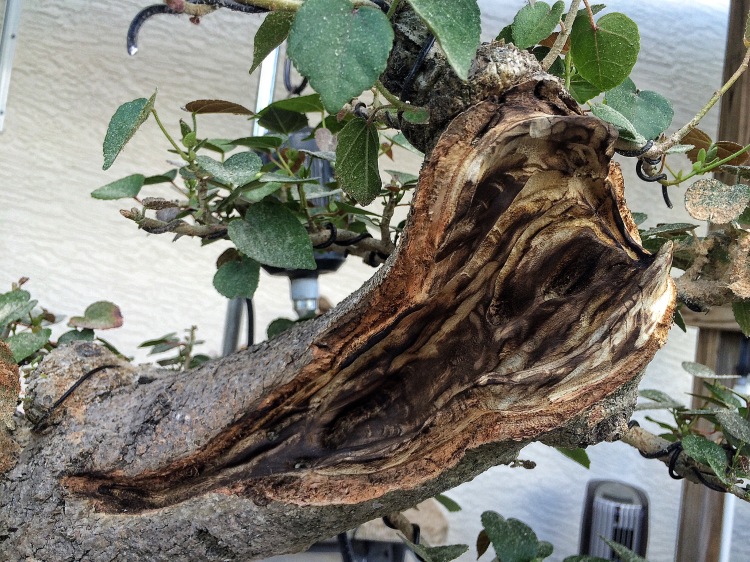 It’s a little black now because I had to torch it a bit, but it’ll look good with a few coats of lime sulfur. This might help you see the detail, here it is in black and white. 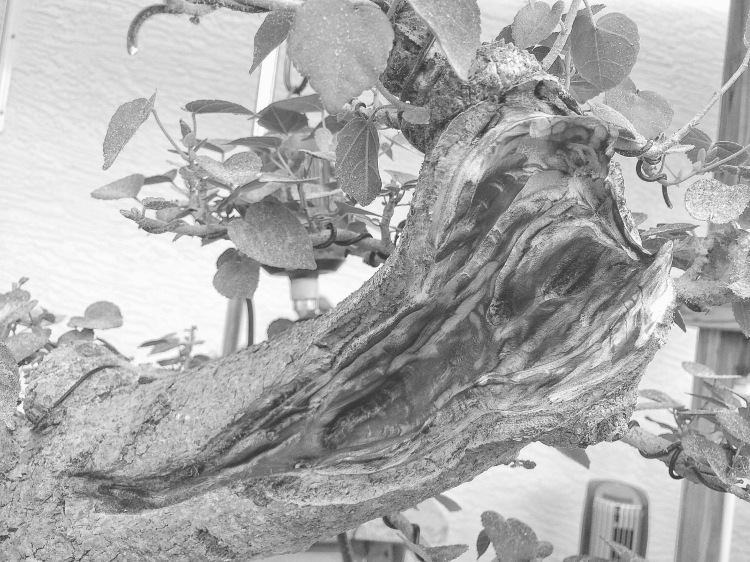 I worked on quite a few trees, about five hours worth I believe. I think Mike (who is the Bsf president) will be writing an article for the Florida Bonsai magazine to promote the 2016 Bsf Annual Convention (on Memorial Day weekend). I’ll be giving a bring-your-own-tree carving workshop. Check it out, the registration will be opening soon (Bonsai-Bsf.com). The headliners are Bjorn Bjorholm and Juan Andrade. Both spectacular artists and stylists.

Getting back to some more of the carving, here’s a buttonwood I refined.  Before. 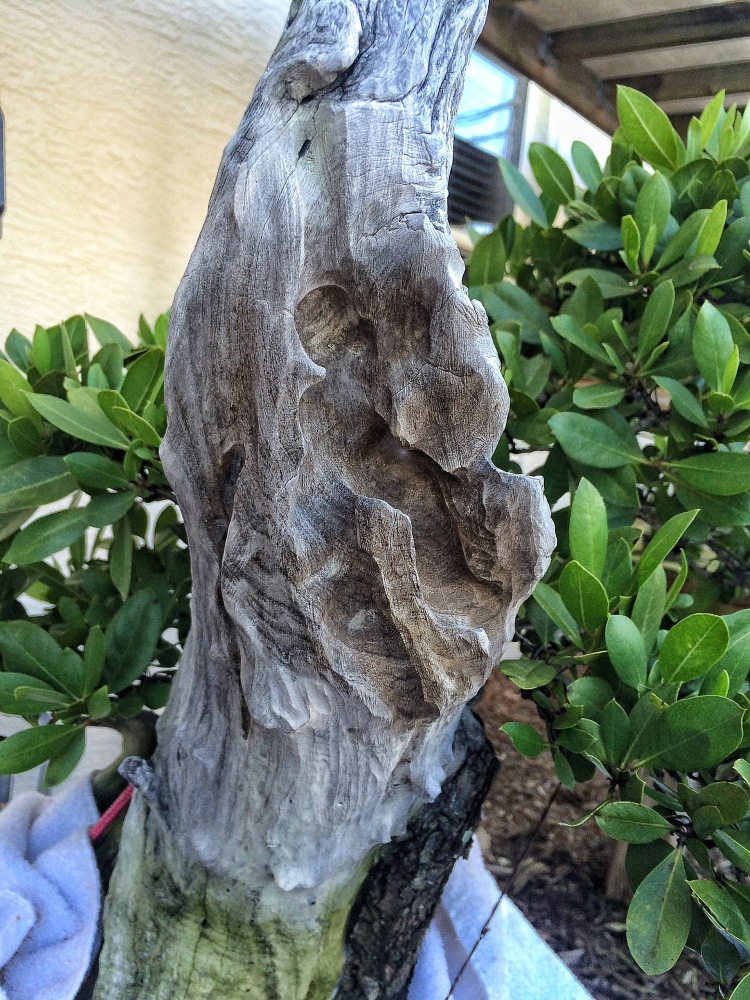 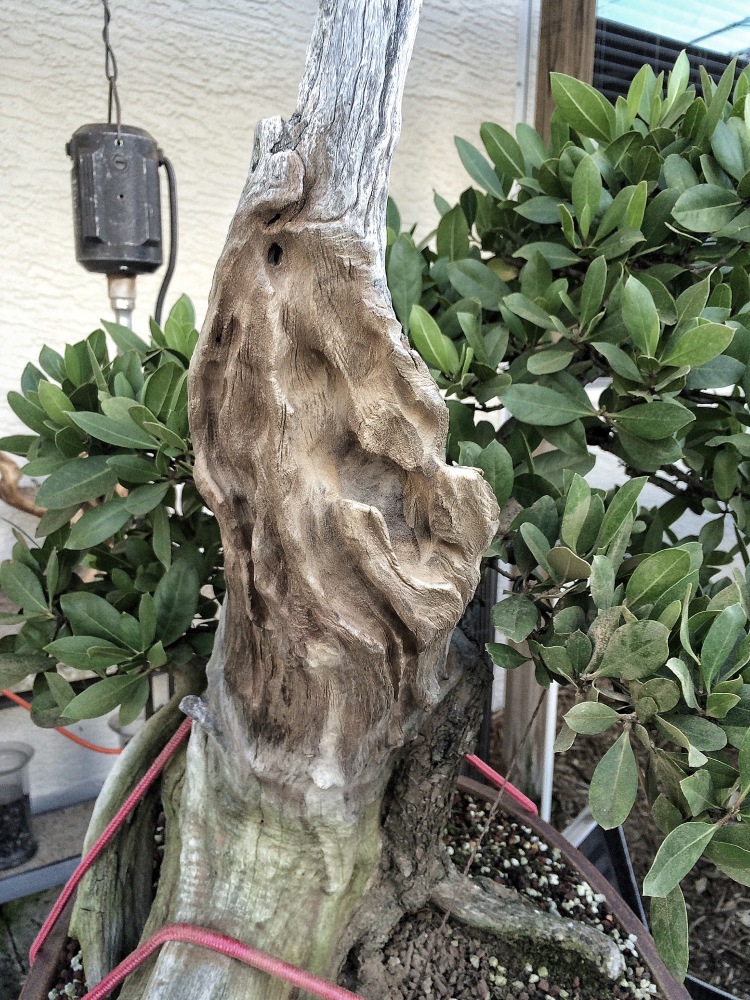 After my session with Mike, we had to rush to our hotel to get a good nights sleep for the big weekend.

Sunset from the Pt. Charlotte bridge on the way to the hotel.

Bright and early the next morning, after arriving at Erik’s nursery,  I was greeted by a nice surprise: two fans, one wearing an American Bonsai Tools t-shirt.

We’re taking over the market….
On the schedule for today was a workshop that Evan was taking with Ed Trout, the Gentleman of Bonsai.  These three pics are by Ed’s sister, Pamela.

Sweet tree, it’s a kaneshiro ficus. Ed is, by far, one of the best teachers in Florida. If you can’t find what you’re looking to learn, in Florida, from him, maybe bonsai isn’t your thing, because Ed is a treasure trove of knowledge and experience.

There was also a demo by Marc, at 9 am, which he kept complaini…uh, wondering about. He couldn’t understand why anyone in their right mind would attend a demo at 9am.  Of course it was a full house.

Jason Osborne was assisting him. 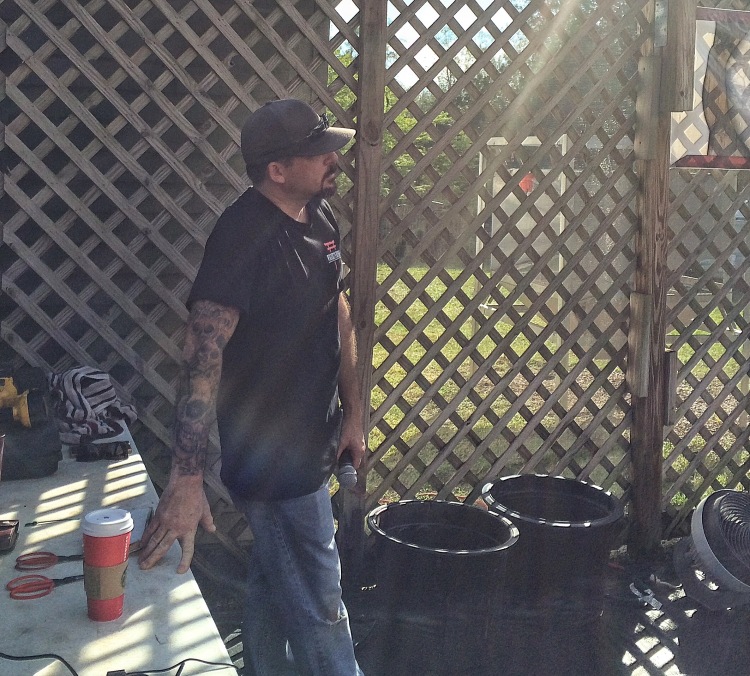 I had Jason over for a Studygroup meeting not long ago. We will see more of him when I show you Sunday’s highlights.

There were many old friends (literally and figuratively) as well as new ones too.

This is JJ, owner of Old Florida Bonsai with her husband, Richard (that’s the nursery where I carved the big podocarpus in this post)

A view into Erik’s collection.

The raffle lady, Angela, peddling hopes and dreams of bonsai raffle victory to all the attendees. You can’t win, after all, if you don’t have a ticket. She’s really good at her job. As you can see.

It helps when you have Marc’s finished demo tree on the raffle table too. Boobs only get you so far. 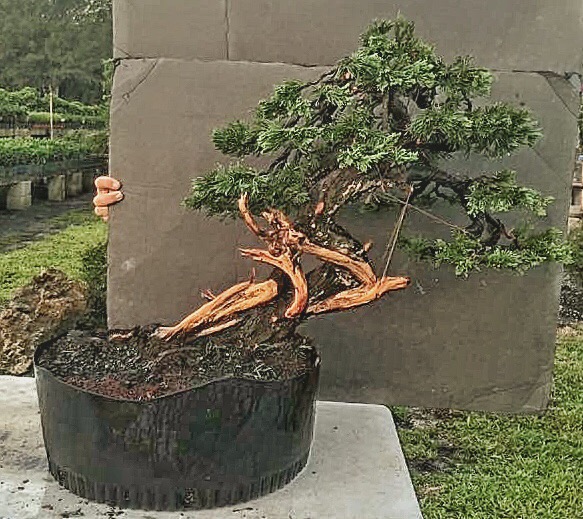 Then it was time for lunch. Erik gives away free hot dogs for those so inclined. Tony, my brother from another mother, handles the wieners. 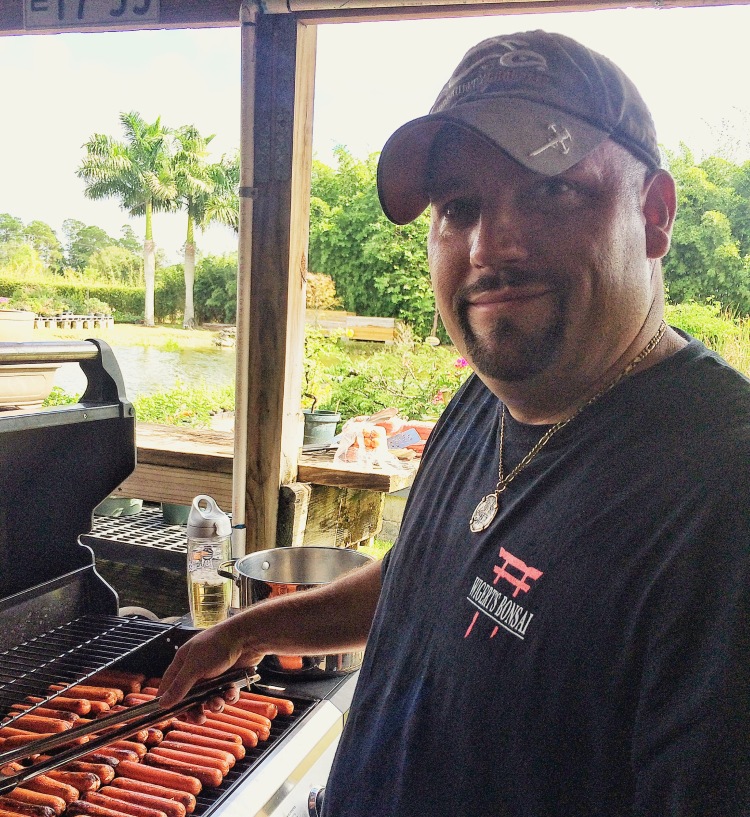 There’s a joke there but I’ll let you make it.  Tony is Angela’s husband.

Tony had a gift for me, a sweet ilex vomitoria “schillings”. 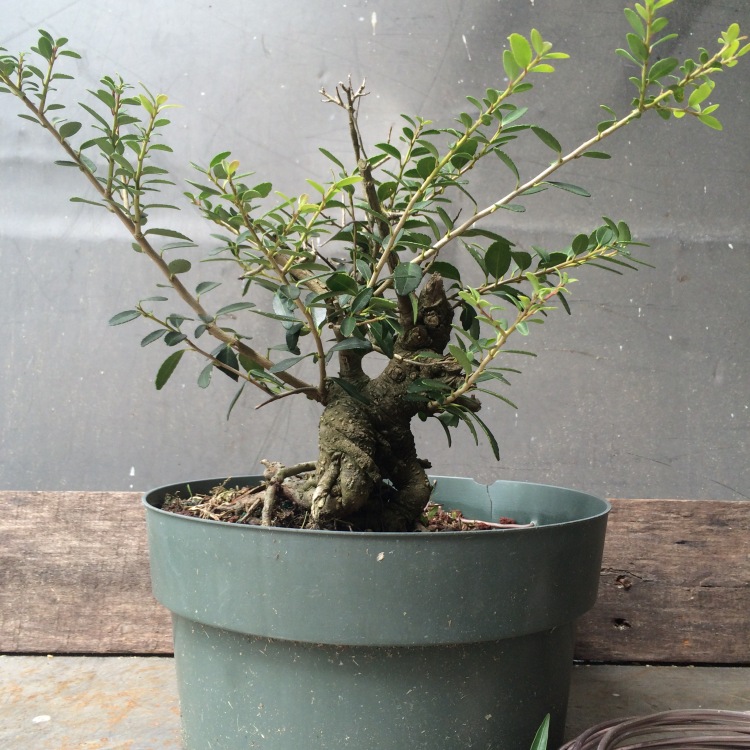 Thank you sir. Look for a post on it next spring.

The event has gotten so big that there was even press coverage. Here’s Erik, answering questions and, of course, sending the reporter towards the free food, cuz that’s what reporters look for first. 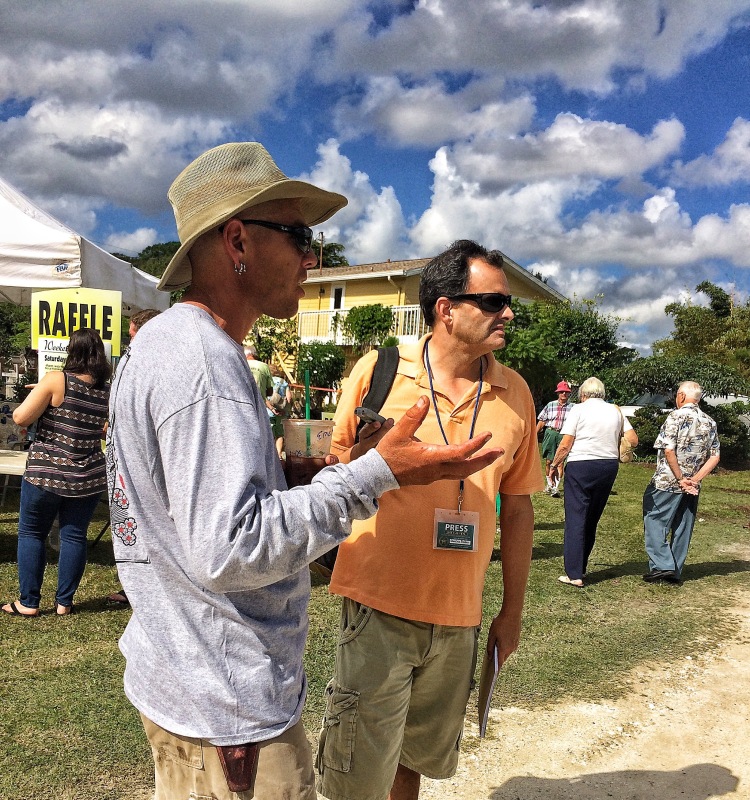 He can smell those dogs cooking. I think he even asked where the beer was. Let’s hope he writes a good story because, sadly, there wasn’t any.

The afternoon brought a demo by the First Couple of Florida bonsai, Dorothy Schmitz and Ernie Fernandez.

Ernie worked on a buttonwood and Dorothy a juniper. 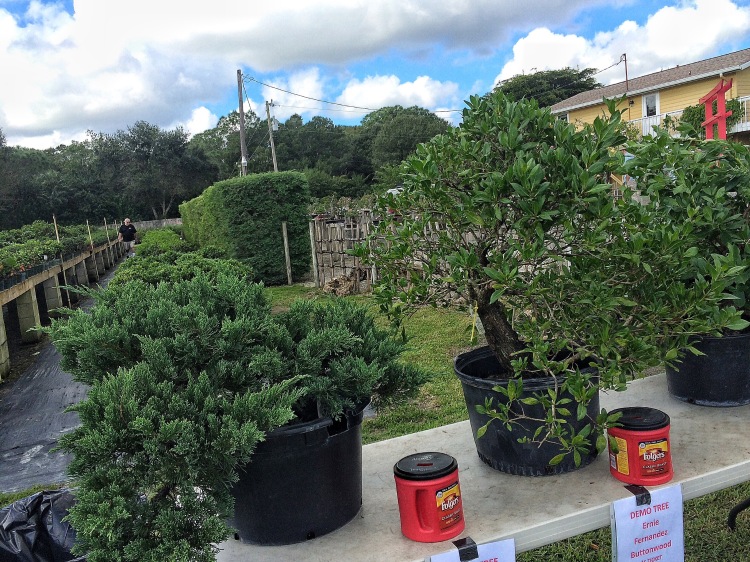 Those trees got a lot of tickets as well.  Needless to say, I didn’t win any raffle trees.

At the same time as the dual demo, Marc lead a workshop on huge podocarpus.

He provided a sketch of the future look he saw in every tree. That really helps a student to see what should come next.

And other than some serious rain….. 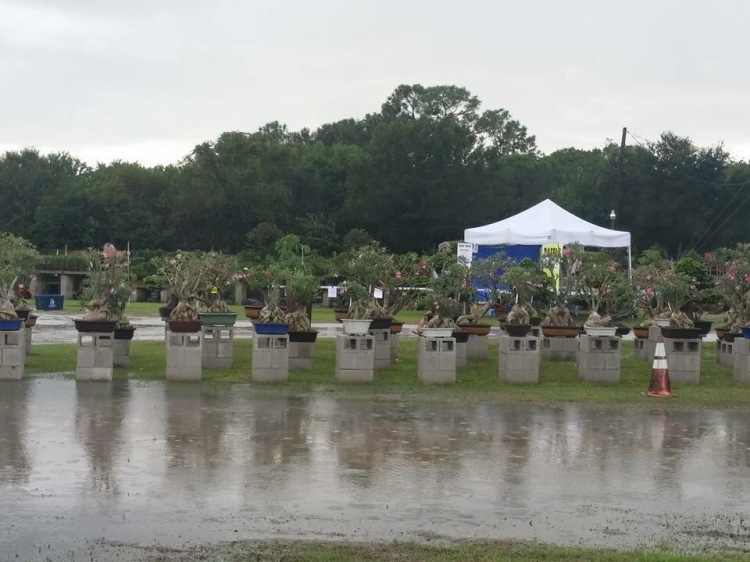 ….and some hobbit feet from Seth. 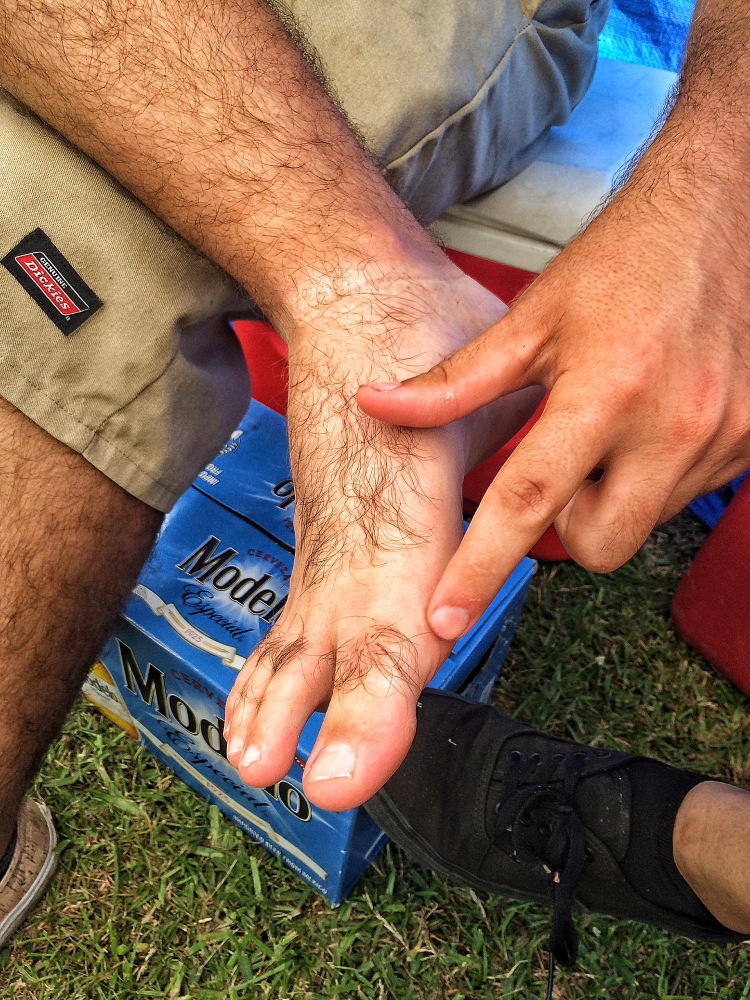 The day was done.

It was time to wind down. I was able to finagle my way in with some serious dinner companions. 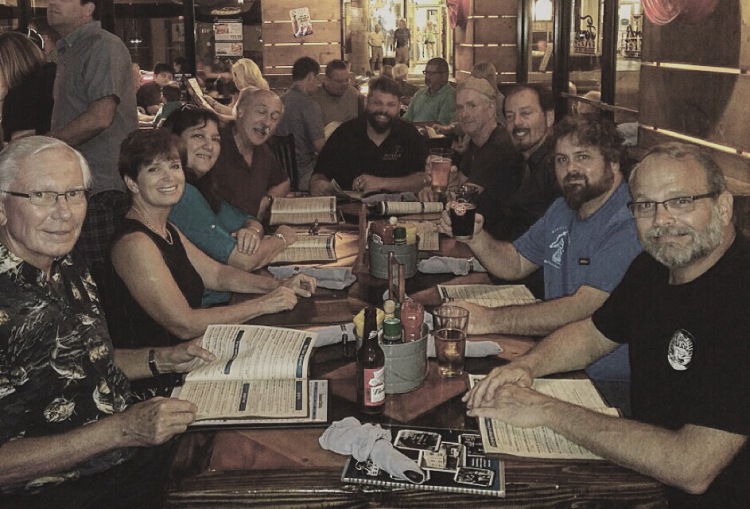 From the left, Mr. and Mrs. Harris. Mrs. and Mr. Kreig, Glen Lord (of the famous Lordiculture Empire), John Powell (who was there installing another facet of Erik’s Japanese garden, I’ll show you that later), Marc, me, and Evan.

We went to a place called Ford’s Garage.

Basically a burger joint in beautiful downtown Ft. Myers. The food is good but don’t get the tuna steak sandwich. Trust me.

Then, because they’re all old and I wasn’t driving, it was off to bed for an early start tomorrow. I thought old people didn’t sleep?

The next day, while Evan captured the sunrise……

I had some emergency business to take care of. 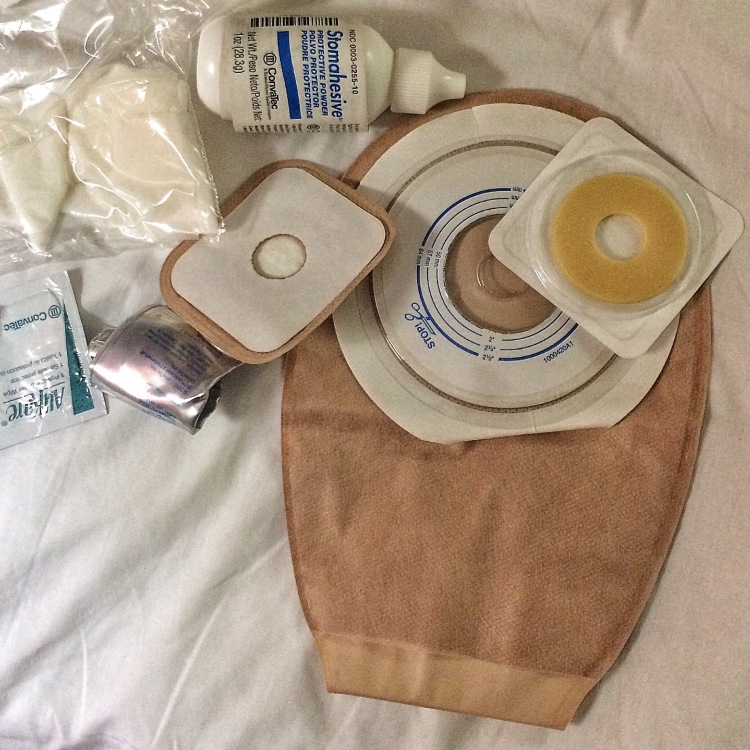 With all the carving, running around and sweat (it was a record high November day in Ft. Myers) I had sprung a leak. Unfortunately, I’m not very proficient at changing my appliance (my wife is an artist at it, thanks dear) so I would spring a leak later Sunday again anyway with the new bag and I had to duct tape myself together. But I didn’t, let that ruin the day, as you will see.

Marc led two workshops on Sunday, one on bald cypress, and the other using cedar elm. Neither of which I got any pics of, sorry.

And there were two demos. One from Mike Lane in the morning…..

…and another from Jason Osborne, who I was honored to help out (and also so I could get some good pics) 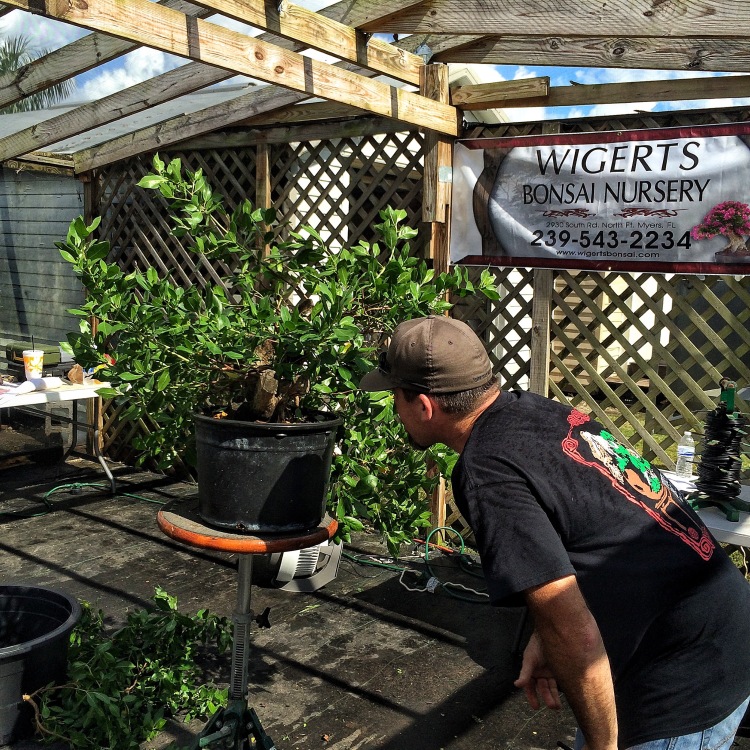 This next pic was taken by Evan. 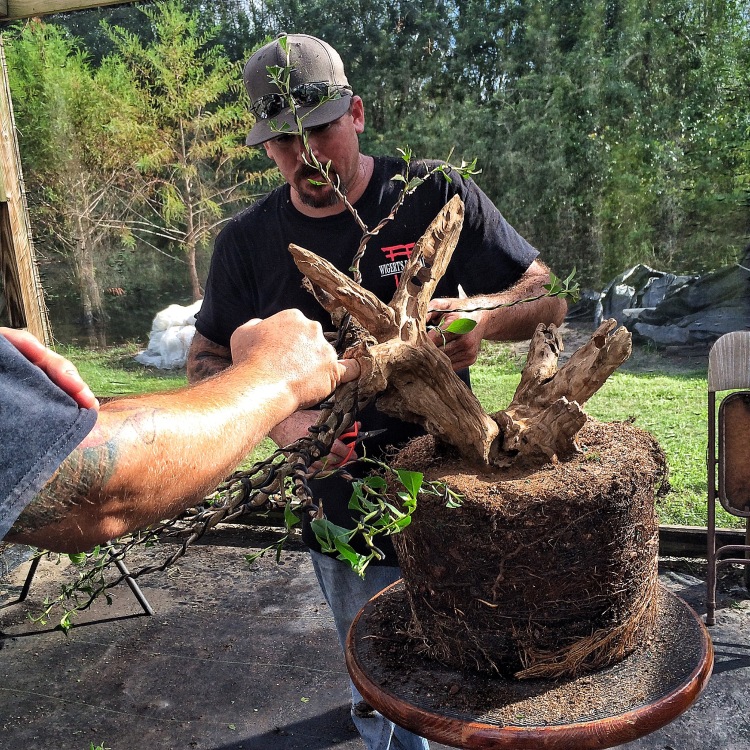 John Powell, out of Texas, is a classically trained Japanese garden expert (he studied in Japan). Erik has had John in for the last several years building the site and demonstrating the philosophy and techniques used (as an example, it’s not necessary to use strictly Japanese plants, just something that fills the niche).  Here’s John’s work this year.

They moved those rocks with a tripod and block and tackle, no machines. And, because someone will ask, this is a close up of that bougie in the left corner. 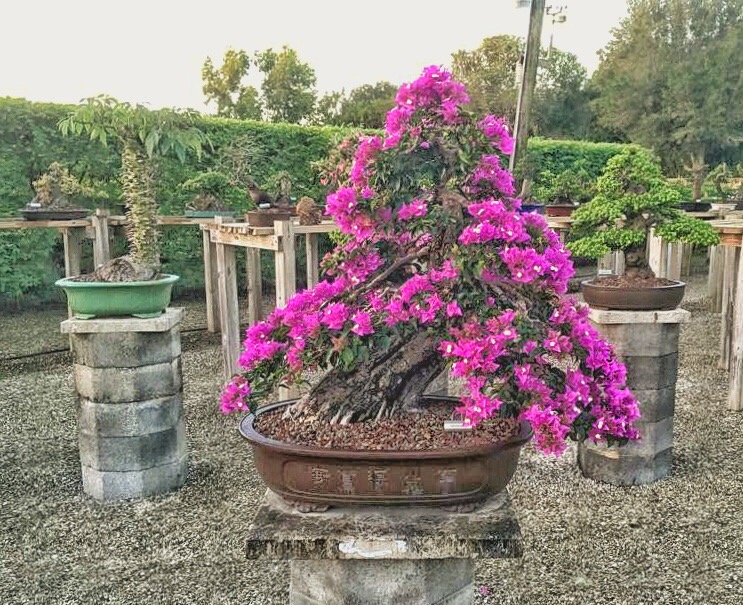 Nice, huh? Erik’s collection is, by far, one of the best in Florida.

And that brings us to last event of the weekend, the styling competition. I decided to enter it after I learned what kind of tree they were using, a Chinese hackberry. It was my first time doing so. I was reluctant entering because of my professional status but when I looked at the trees, Chinese hackberry (celtis sinensis) I decided I wanted one (you get to keep the tree) as I didn’t have one yet.

This was the pic from Wigert’s Facebook page advertising the competition.

Coincidentally, I was given the tree on the right. I honestly didn’t like it.

There could be no outside help.

The time limit is 30 minutes, no more.

You can try to psych out your opponents (there were 15 other competitors, believe it or not. It was raucous) but don’t touch their tree.

Beer was allowed (I think that was my true advantage)
After thirty minutes (on the dot) we had to drop our tools and step back from the trees. Now, there are some of my readers who are marveling at the short (very short) time allowed to style the trees. So was Marc, the judge. 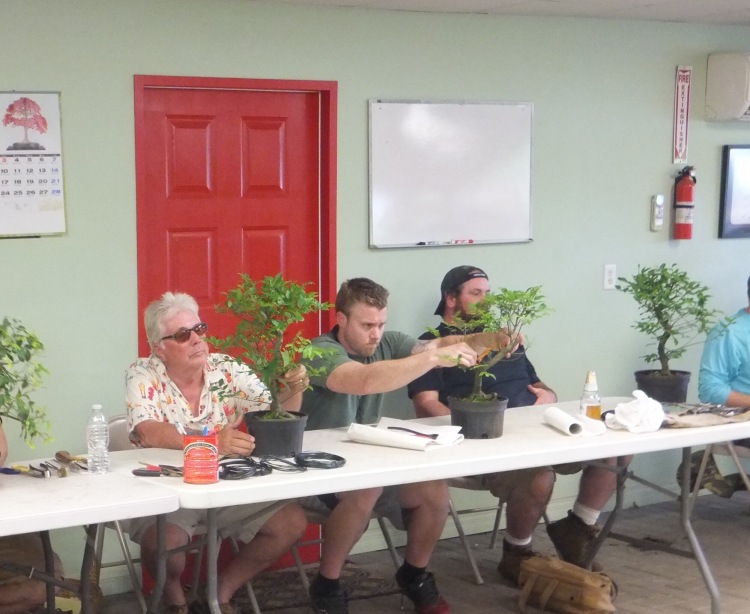 Then, all the competitors were asked to leave the room while Marc judged and explained his thoughts. He told everyone in the room the winner and then Erik let us back in. I hadn’t gotten the chance to look at anyone else’s trees after the styling, so I had no idea about my chances. When we came in, there were three trees on the table.

These three were the top three. Mine was there.  He explained the pros and cons of each and then announced the winner.

It was my tree. 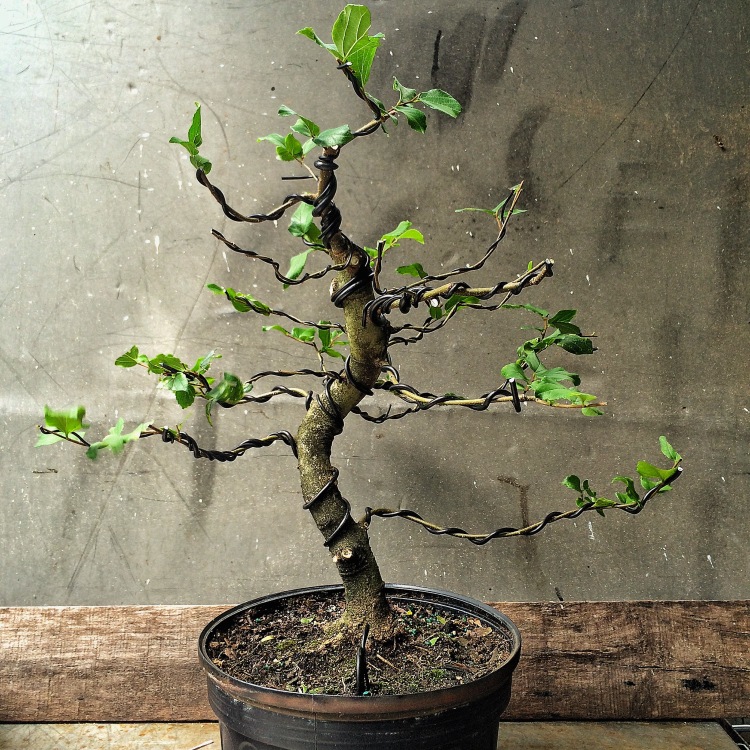 I couldn’t believe it. I was embarrassed and happy at the same time. 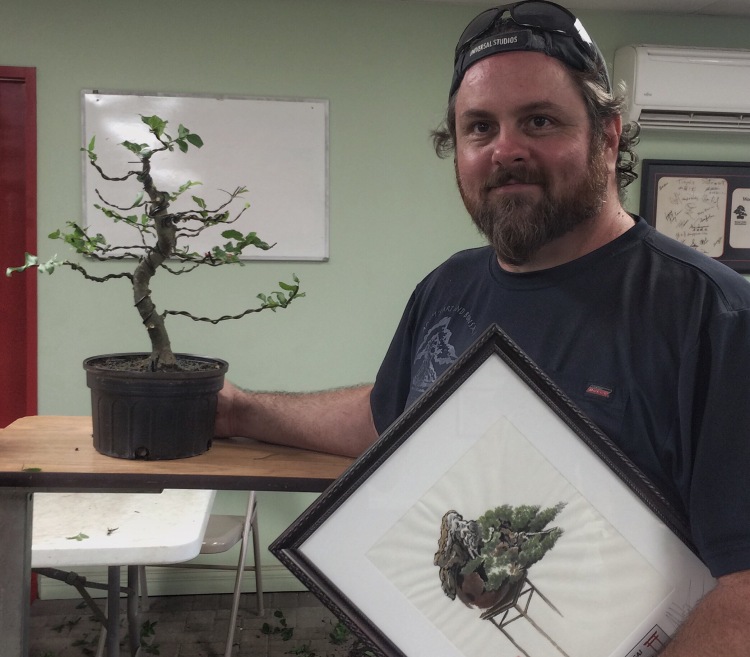 You can see how red my face was. Although that might have been the beer.

After that, it was dinner at Joe’s Crab Shack, hugs and kisses and hearty handshakes all around. And then the three hour trip back to Orlando.

What a weekend. Next year Erik is going to have Robert Steven from Indonesia. I can’t wait.

Thank you to all the photographers I stole pics from, especially Andrea, Evan and Becky. And a second, heartfelt thanks to Evan for driving and putting up with my oddness. See y’all next post when I return to my normal routine.