There I was, day two, enjoying the sweltering afternoon sun at the Brevard Zoo, hanging with my peeps at their annual showing at the zoo, trying to sell trees and keep cool, when Reggie asks, “Hey, where’s Rob? He’s supposed to be doing a demo right now.” Well, this is what Rob was doing:

He posted that on his Facebook about a half hour before he was to go on. Rob is very creative and he’s been pushing the envelope as far as bonsai display is concerned. You’ll remember his display from the two blogposts I wrote on the 2015 Winter Silhouette show (Here and Here). His display at the zoo this weekend  was no less creative, it featured a forced perspective shadow box. 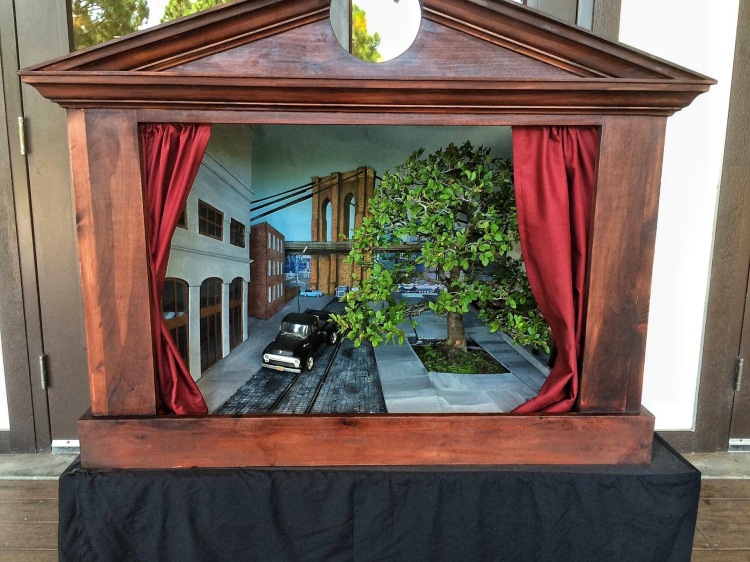 That’s an elm in there and he built/painted everything else. Pretty cool. I believe it will be on display at the 2016 Winter Silhouette show as well. It’s on the 3rd and 4th of December this year, in Kannapolis, North Carolina. Go to the official Website for all the details. I’ll be there again.

Anyway, like I said, it was day two of the Zoo Show and I had already done a demo the day before on a jaboticaba:

What it looked like before I wired it out. 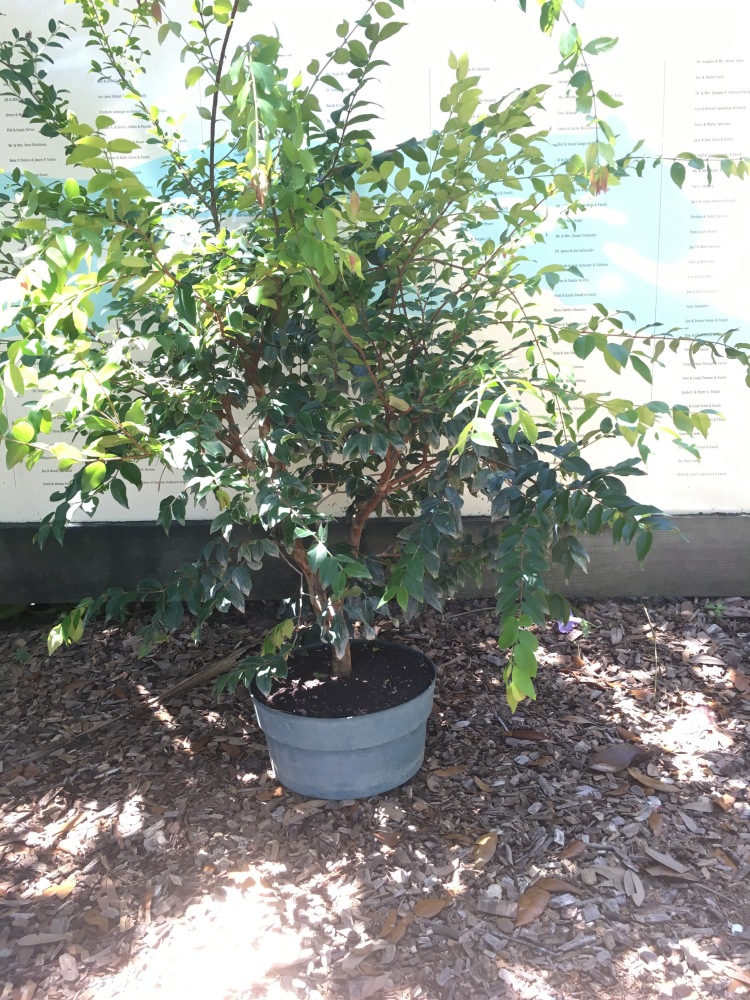 And I was sittin’, sippin’some Jin and juice (see what I did there?) enjoying the a/c inside the exhibit room:

Here are some trees I liked: 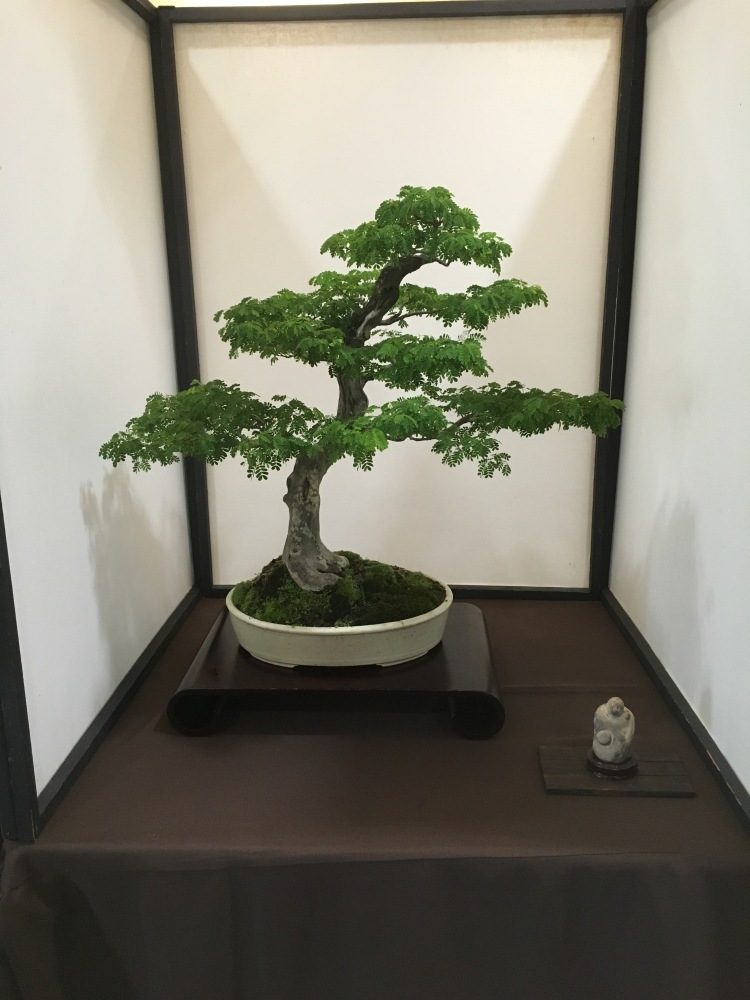 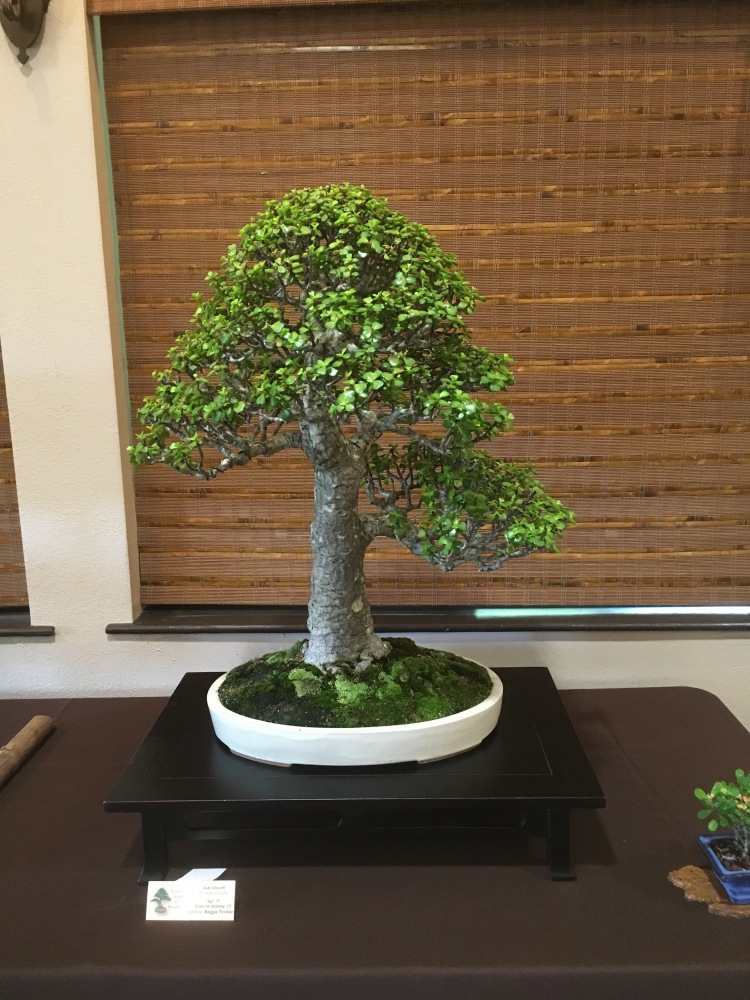 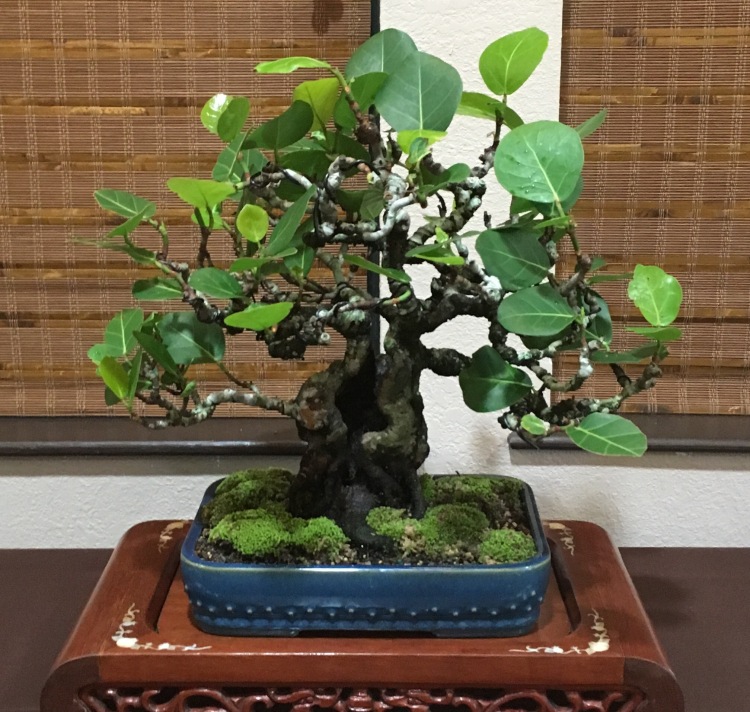 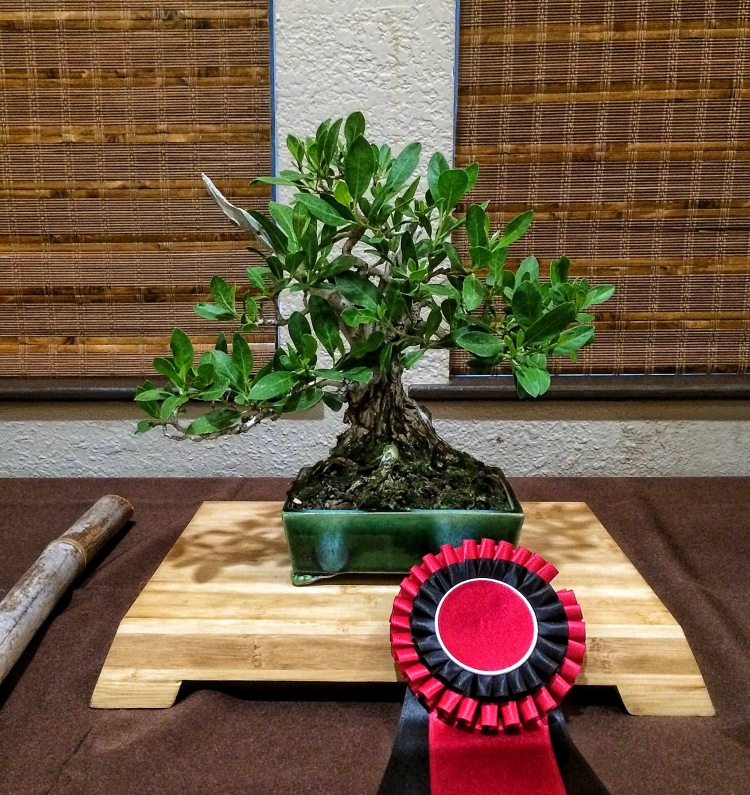 But then, because I looked bored I guess, Reggie asks me to do the demo. Of course I said yes, I’m an attention whore, don’t you know (aren’t we all?). Here’s the tree.

A ficus philippinensis, which means it’s native to the Philippines. It was the last tree and probably the least developed.

The first thing I did, for my enormous audience…… 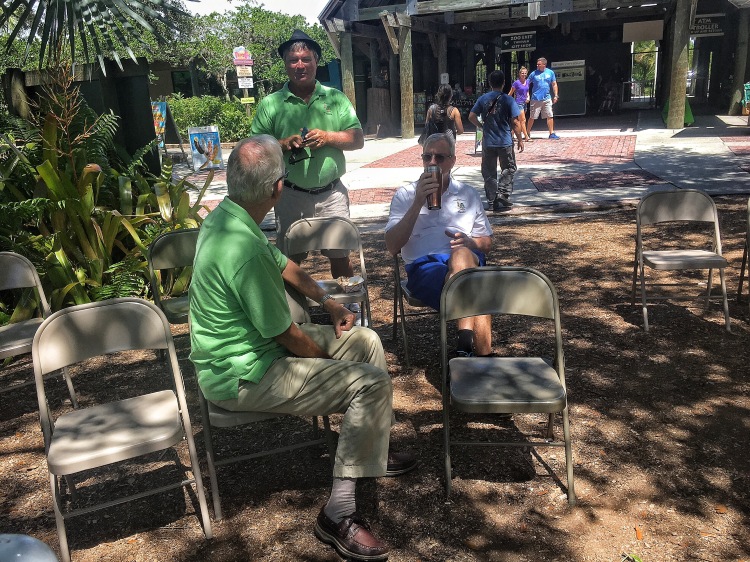 …..was to straighten out the roots. 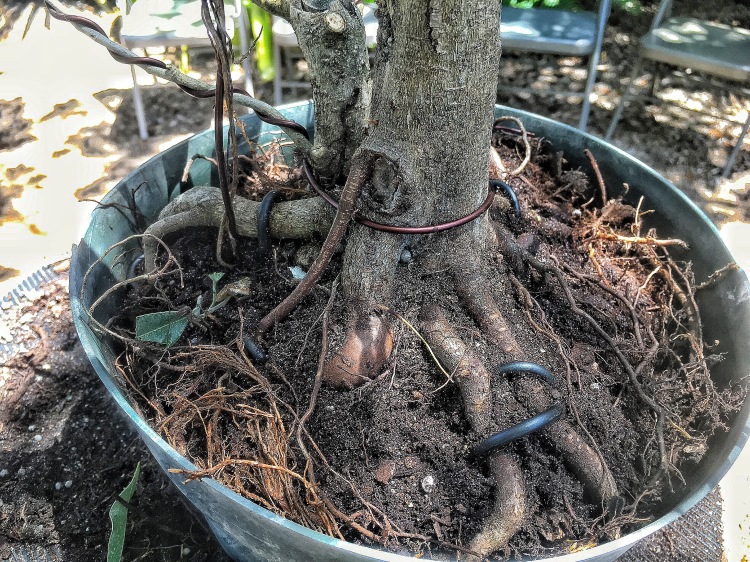 If you are paying attention, the pics aren’t in order of the work done. I was giving a demo so I couldn’t really take to many pics. Example, in the above pic, you’ll see, in the back/left, where I stuck the top of the tree into the pot. I chopped it here:

And stuck it in the pot to create a second trunk.

But I did that first and wired it second. You get the idea.
The finished tree after the demo.

The one feature of the philippinensis, that makes it great for bonsai, is its ability to self graft. So the smaller, back “trunk” (the cutting ) will fuse with the trunk and make for a bigger tree, faster. After it roots, of course. Which it should. I think.

Many people would have just chopped the tree about eight inches above the soil line, and that would have been a perfectly correct thing to do. But what would I have taught to my audience (all three of them) then? In fact, I was so impressed with myself and liked the idea I came up with at the demo so much, I purchased the tree afterwards, so I could continue the lesson for ya’ll.

To reiterate this lesson, here’s one of my famous yellow legal pad drawings. 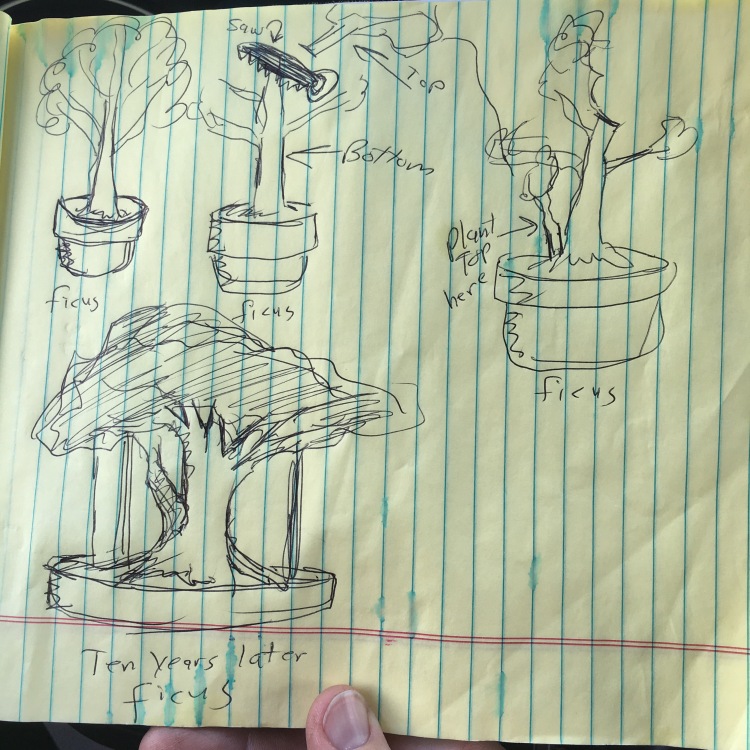 Maybe seven years. I hope I make it that long.

I took the tree home and fertilized it and added a bit more soil. 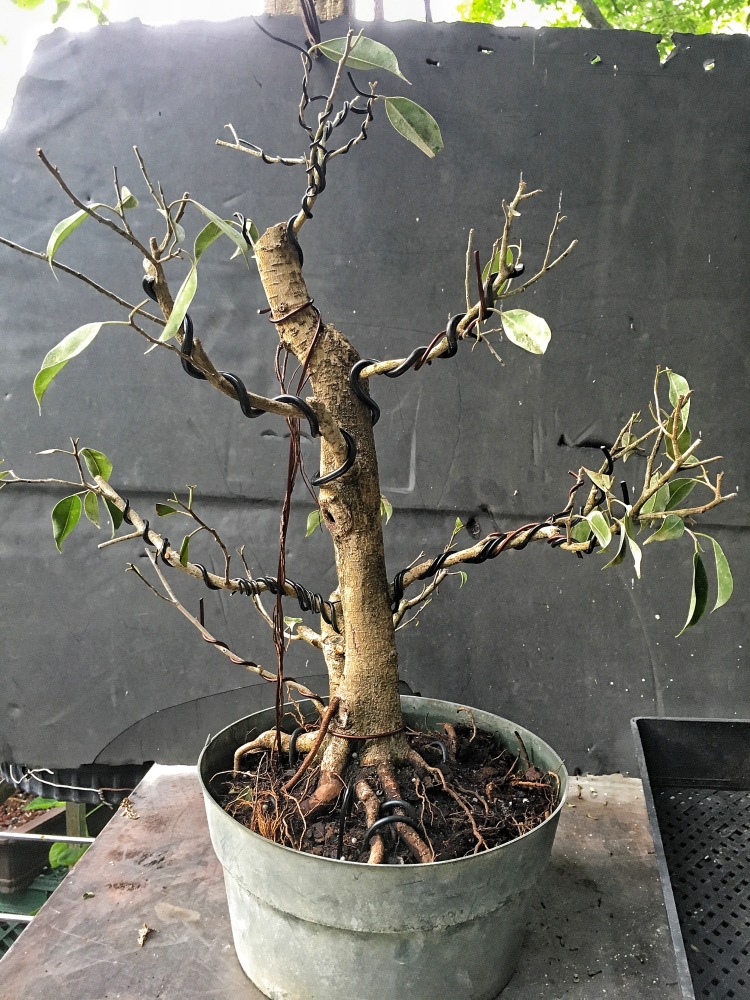 I’ll probably shorten it by another 4-5 inches but, right now, I have that aerial root on the left (which originates way up high in the top) secured in an approach graft with the first branch. 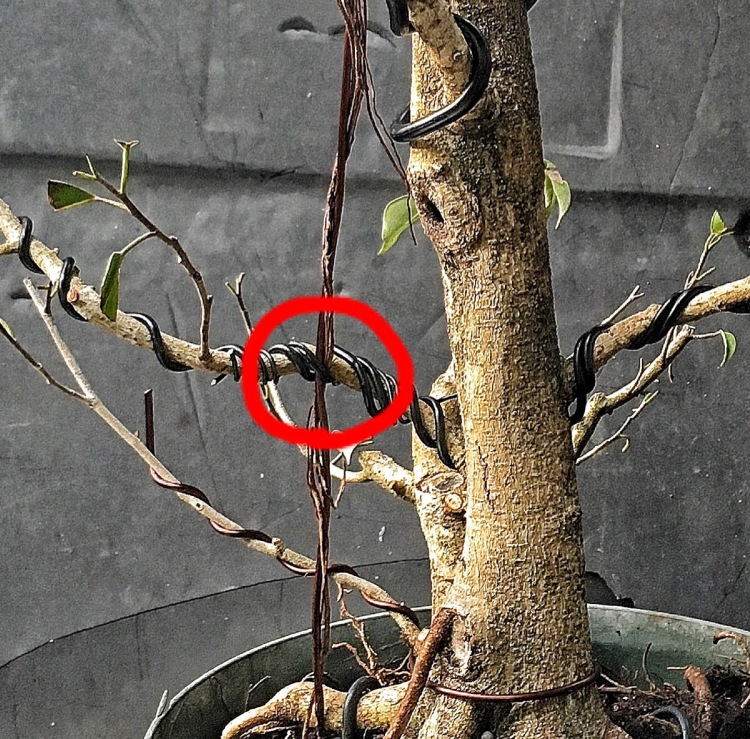 It shouldn’t take too long to fuse and then I’ll chop the top again about here: 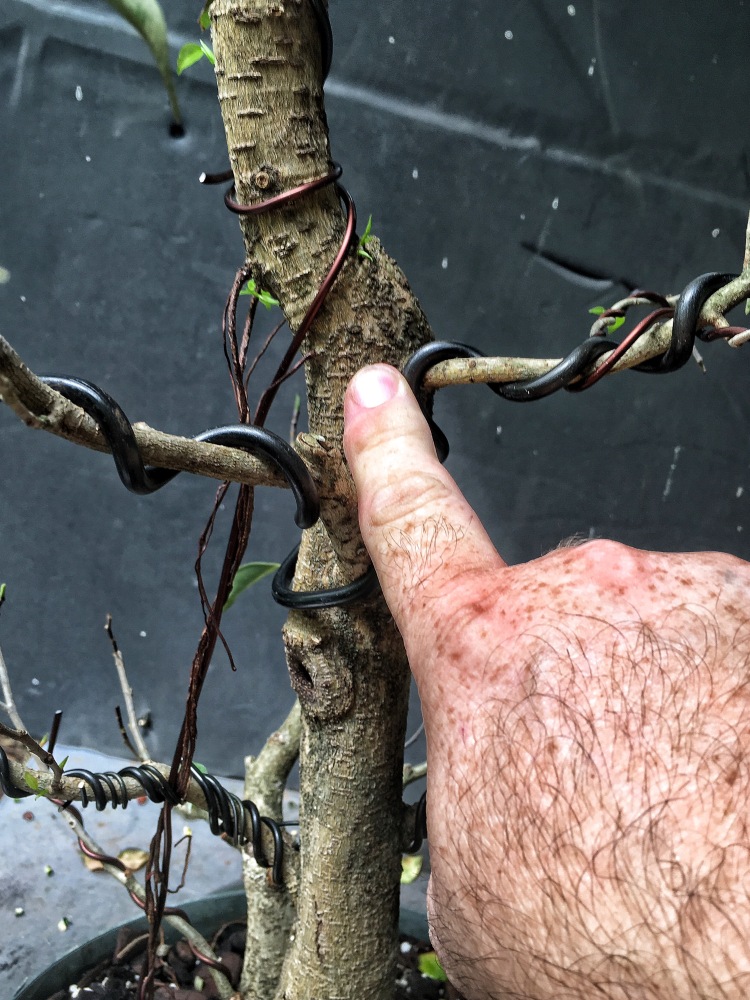 …and maybe even stick it into the pot as well here:

Look for an update next year in the spring.

Oh, two more lessons for you. One: this is the correct posture when taking a pic of a tree…. 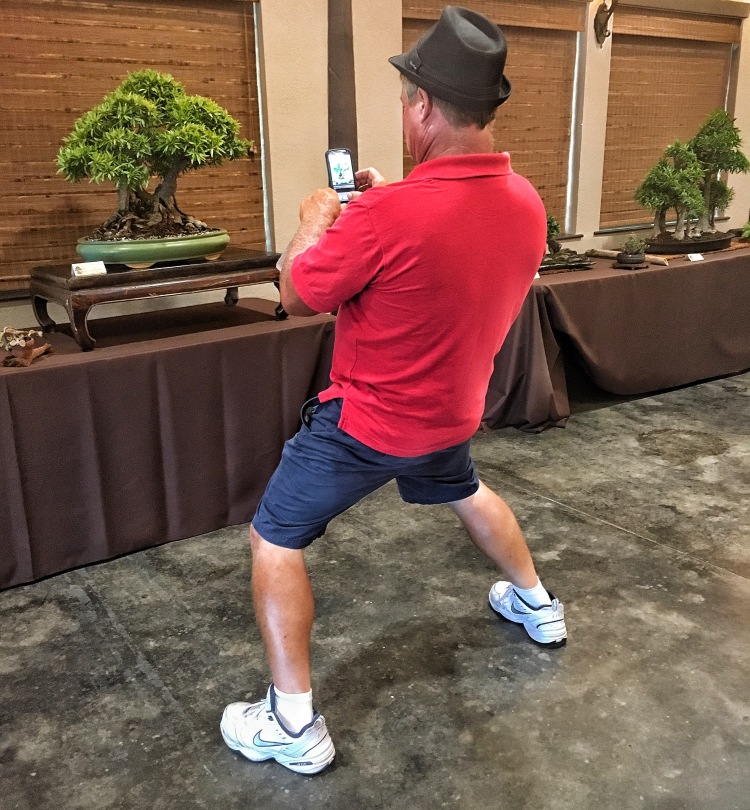 …..even though it looks ….ummm….funny. You should get the pic with the point of view about 1/3rd up the trunk. That’s the proper viewing angle.

The last lesson? Make sure I’m not behind you to get a pic of you taking a pic because I will put it in the blog. Sorry Donnie.