It all began with a suggestion from Paul Pikel. There I was, flush with funds from my Bsf styling contest win at the 2015 Bsf convention and I couldn’t figure out how best to use the money. He said I should use it to go to Kannapolis, NC for the Winter Silhouette Bonsai Expo. Sounded like a good idea. It was. You’ll see.

Here’s a very brief (not really brief, there are so many pics I’ll have to break it into two posts) write up of the trip.

I wasn’t going alone. I traveled with Rob Kempinski (for those of you who know Rob, you’ll understand my trepidations),  Seth Nelson (ditto for Seth),  and Angela Winzeworth (she made the trip more pleasant, glad she came along)  Seth is the curator of the James J. Smith Collection at Heathcote Gardens in Ft. Pierce. He was showing as the collection’s representative (even though they are refusing to compensate him for the gas. That’s just wrong) Here’s his display at the expo.

This was actually the third tree he chose.
Rob is currently the past president of the Bonsai Clubs International. Here’s his display.

Then we learned how big the tables were. It wouldn’t fit on them, with a stand and all. So his next choice was another big (big) f. Salicaria.

Then Rob said he was taking a big (big) salicaria….. 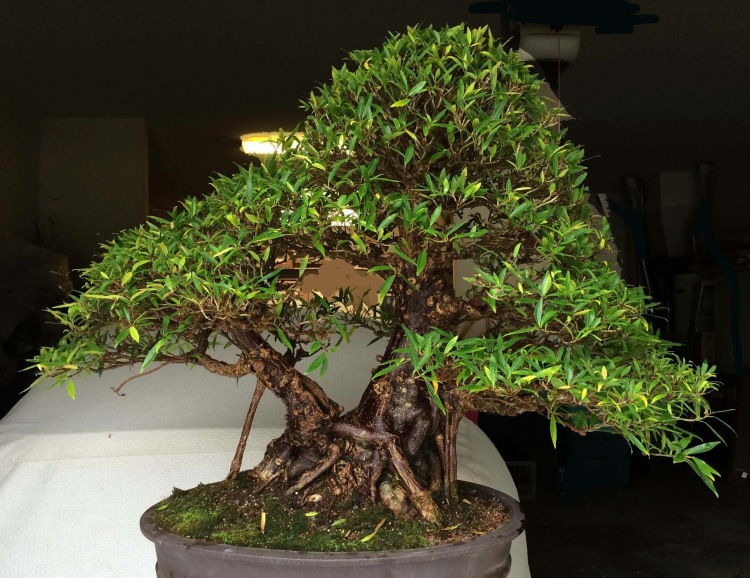 …..so Seth chose a big ficus microcarpa instead.

This one is just merely big.
I chose to exhibit two small trees, an American hornbeam and a dwarf jade. Here’s “how” to my prep. First, I pruned the hornbeam about a month ago.

About that time, I decided to make my own stand, so I had to pick a piece of wood I was going to use for it. I cut it to size. 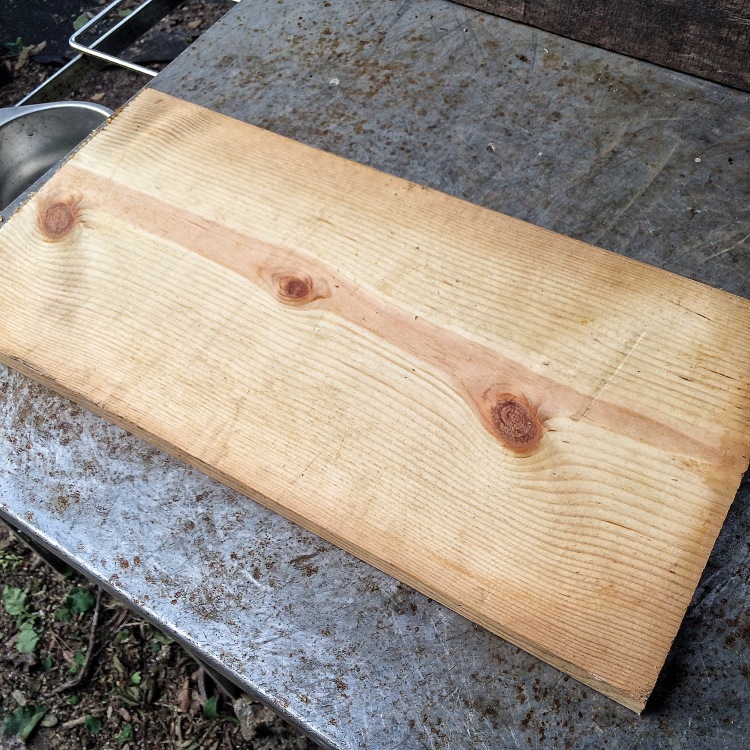 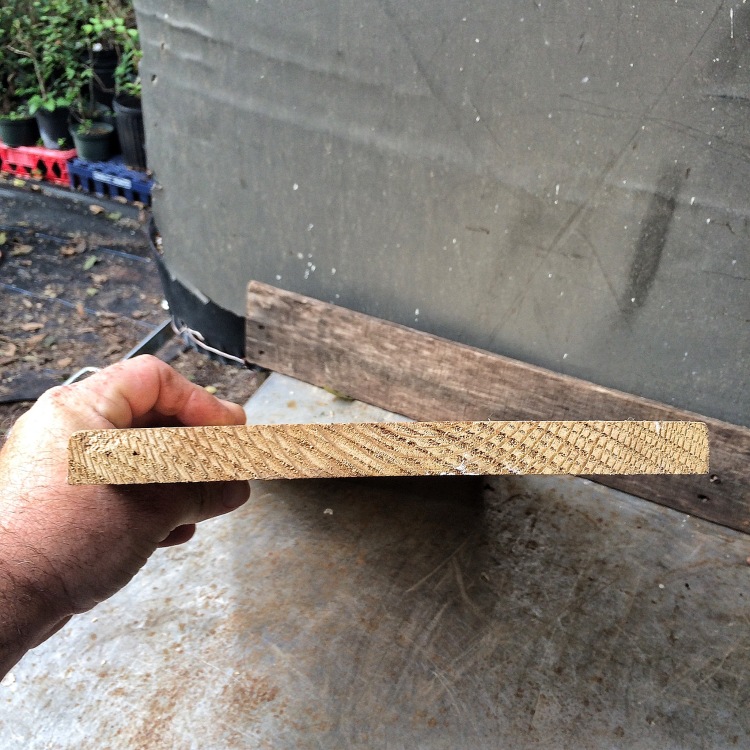 Then I threw it on the ground and stepped on it whenever I walked by, hoping for some weathering and grime. At this time I played with the idea of a Brazilian Raintree as my second tree. They can be deciduous trees in the dry season, which for Florida, is technically in the winter.

It’s coming along well. But I wanted to use this stand.

Which really requires a cascade style tree, so that excluded the Brazilian. Maybe next year with, a different stand.

I made that stand too. The base is a front brake rotor off of a car.

The twisted wire is 1/4 inch round steel stock I found on the side of the road. It was already twisted, I didn’t have to imprint my personality on it in the least. I added a few more pieces to give it some structural integrity.

It’s welded together. The platform is a chunk of red cedar from a piece of reclaimed wood that was left over after Hurricane Charlie’s wrath.  It was a scrap piece off of a log that I carved into a tiki man. 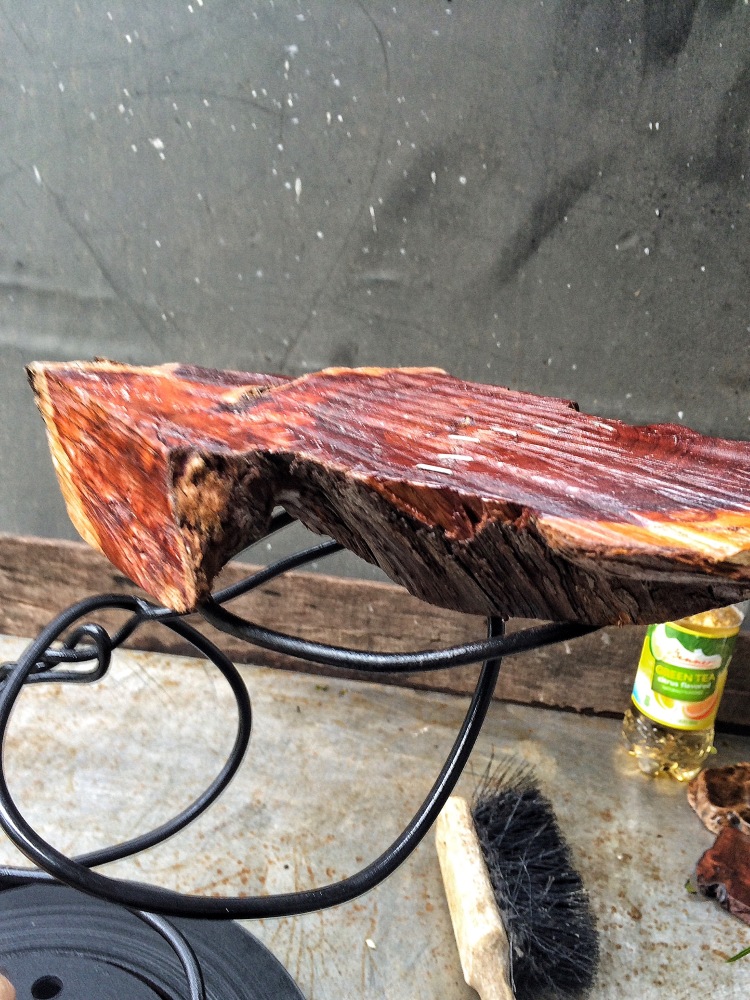 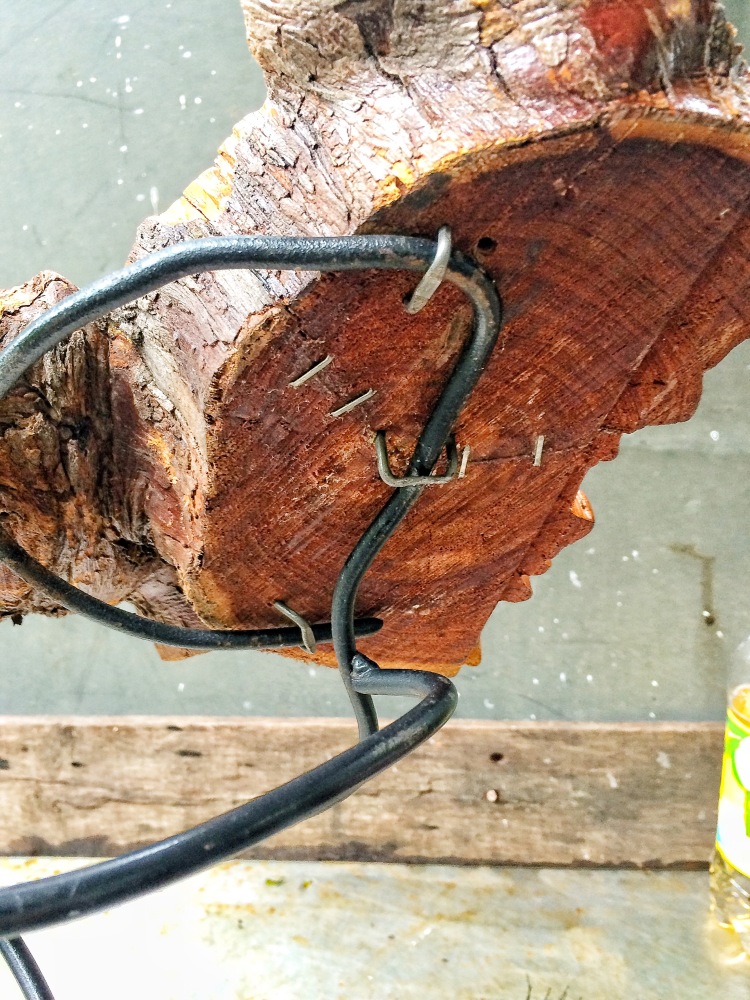 The cedar is attached with big staples. Those little staples are holding the piece together after the wood split, that and wood glue. I think it adds to the design. Wabi Sabi and all. 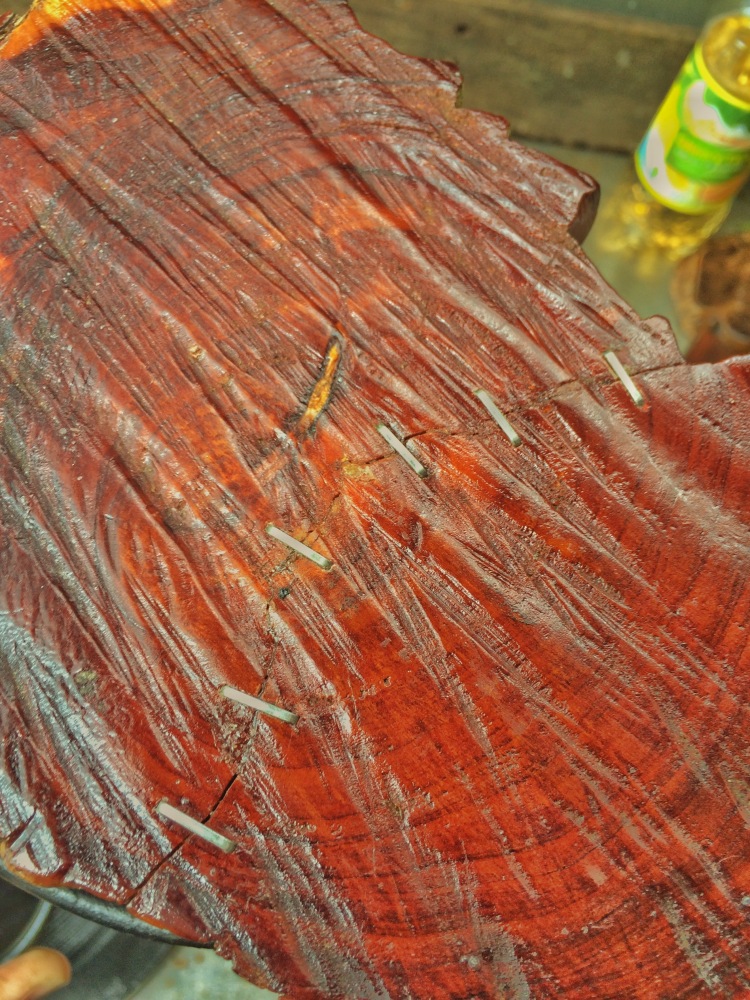 Here’s the tiki dude I cut that wedge from.

Speaking of dudes, look what I am now. 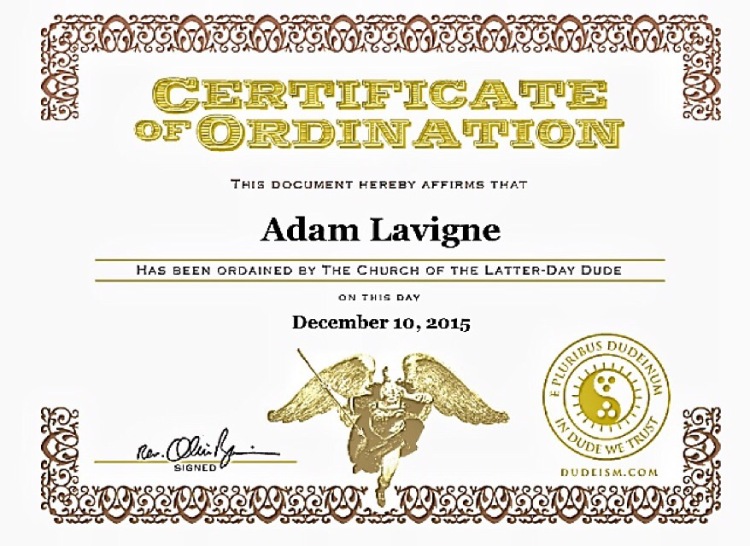 Cool.  Certified and certifiable, right? I’m available for weddings and officiations. Now I just have to develop a taste for White Russians. But I don’t smoke, although it may seem like I do, at times. Speaking of which, I had flirted with the idea of using this tree as well, a bougie.

I would have too, if it was blooming. Next year for sure. Just gotta get the timing right. As for the suitability of a blooming bougainvillea in a winter show, now is the natural time for them to bloom, in the dry season. I chose, instead, a Portulacaria. 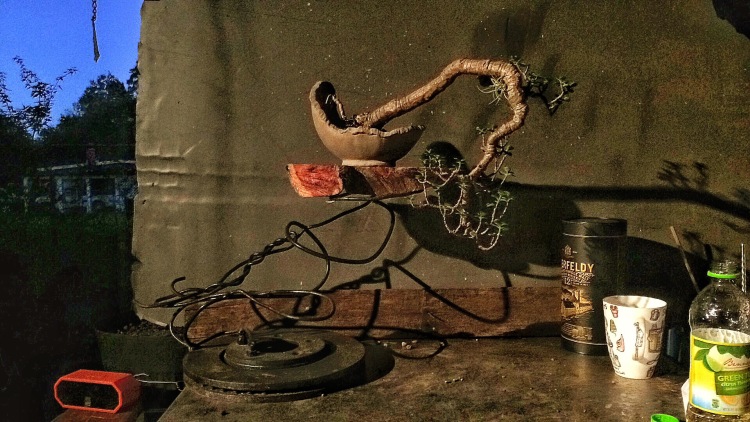 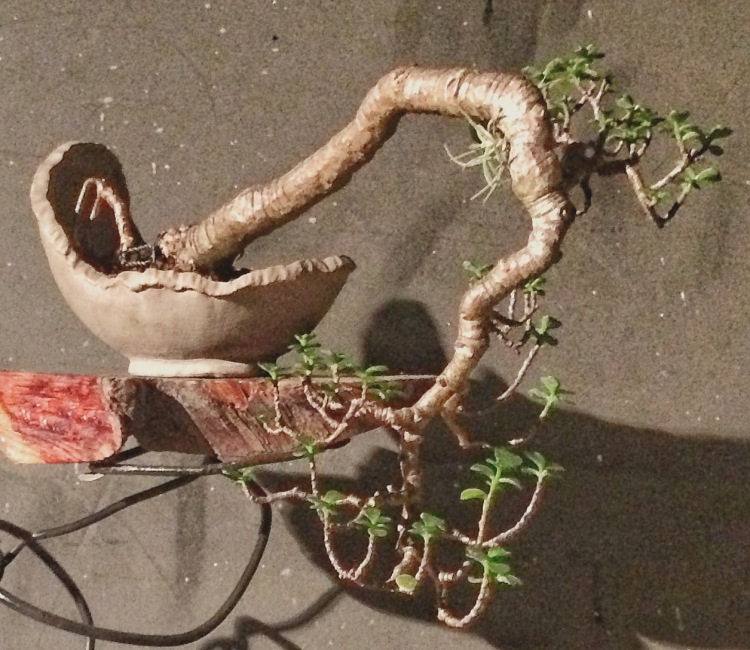 I needed a strong, stylistically unusual tree for that stand. I think I chose well.
I did get grief for the thinness and the light ramification of the foliage.

It is true that one can ramify a Portulacaria so much that a quarter, dropped on a foliage pad, cannot pass through it. But the style, the habit, the idea, of this specific tree just does not match with a lush, dense canopy. I don’t care what can be done with it (and I have several dwarf jades, in tropical tree styles, with dense canopies), this tree calls for a sparse, almost struggling looking, branch structure. I actually removed leaves and branches for this look. I am an artist and I do things intentionally.

I almost used the rum bottle for an accent. That would have been epic. But instead, I used this cool euphorbia.  In my own pot, no doubt. 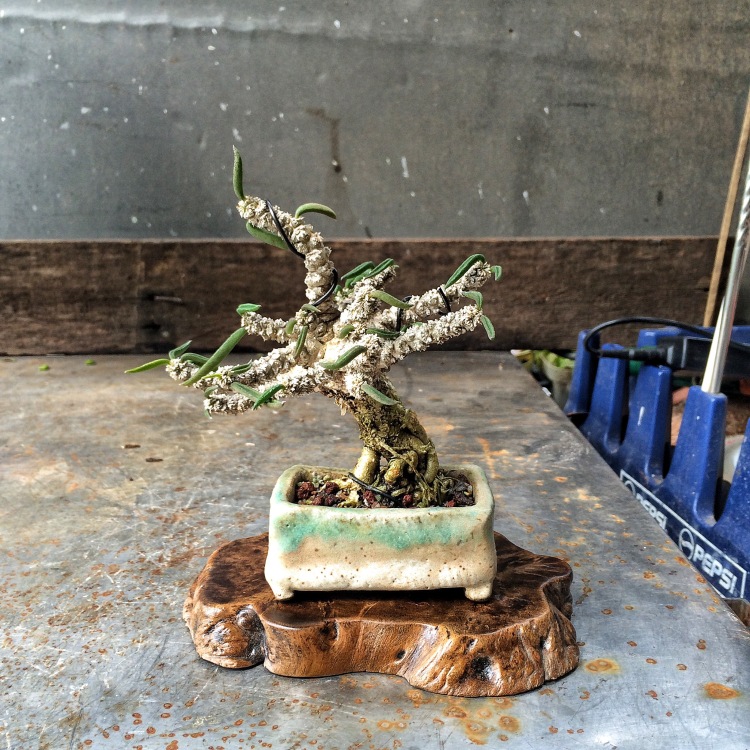 The accent for the hornbeam is this little haworthia in a Dave Loman pot.

Then, a few days before the show, I mossed the hornbeam and carved the stand. 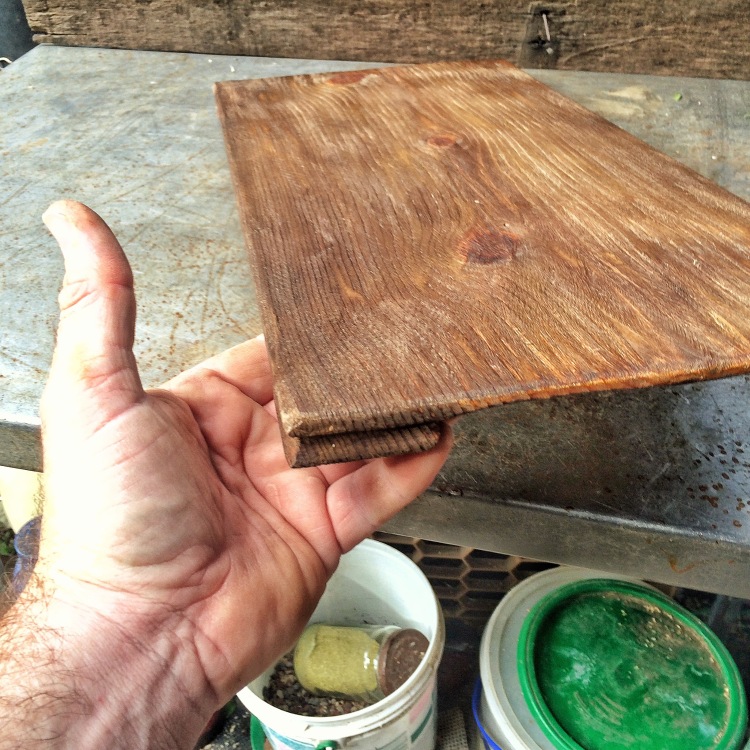 And the night before we left for the show, I defoliated the tree. 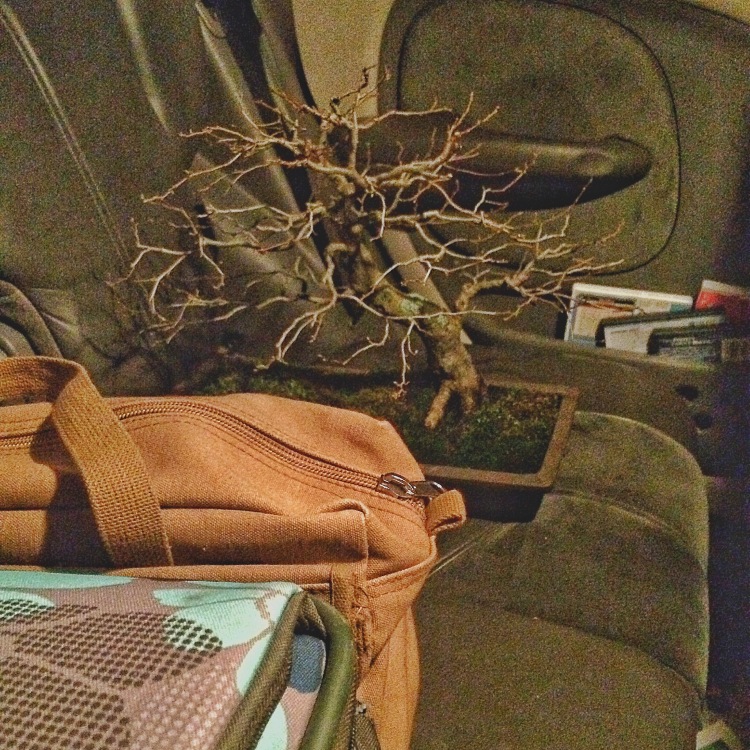 At Rob’s we had to pack his truck.

It was still dark when we left. The trip to Kannapolis was a ten hour trip. We took two vehicles, Rob’s truck and Angela’s 1999 Pontiac. Seth got to ride with Angela (which makes sense because they are bf/gf and all) and I got to ride with Rob. It was fun, actually. I got to talk to him, which was an education with all the experiences he’s had. Not bad at all.

Here are some pics from the road:  a sign seeming to say “please throw the toilet paper in the toilet, not on the floor” I’m not sure if I want to know the reason for that sign. 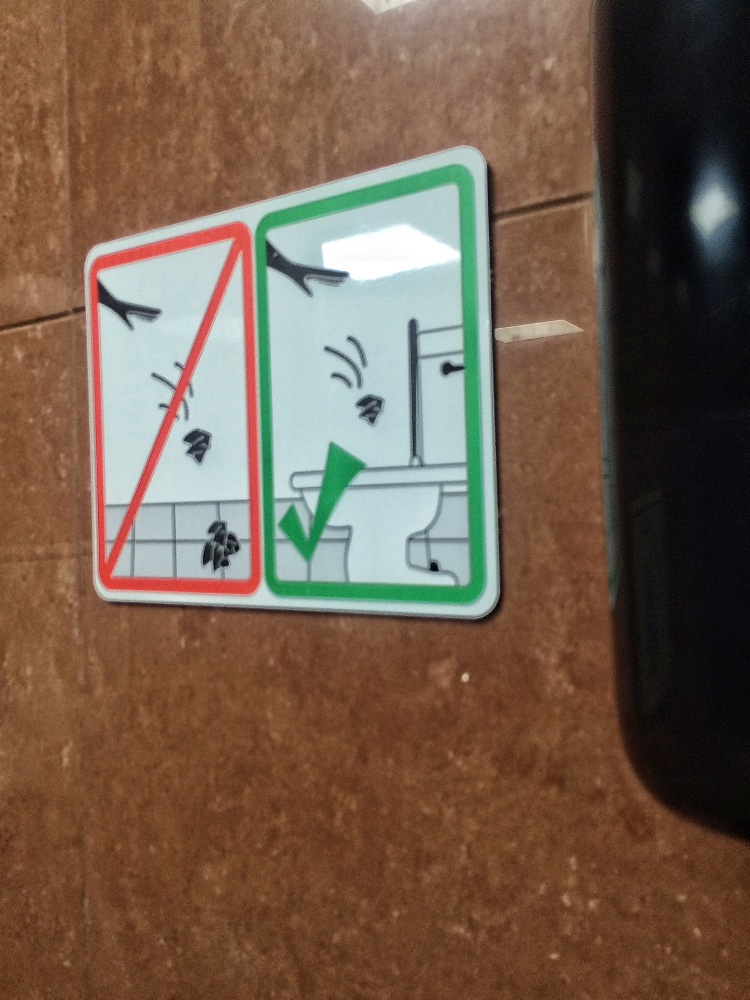 A pound of peanut butter and chocolate!

There’s the Pontiac, rolling down the road.

They managed to keep up.

I have to pee! (That was one thing, old men with their prostates and young women with their small bladders. We must have stopped to pee in every county seat on the way). 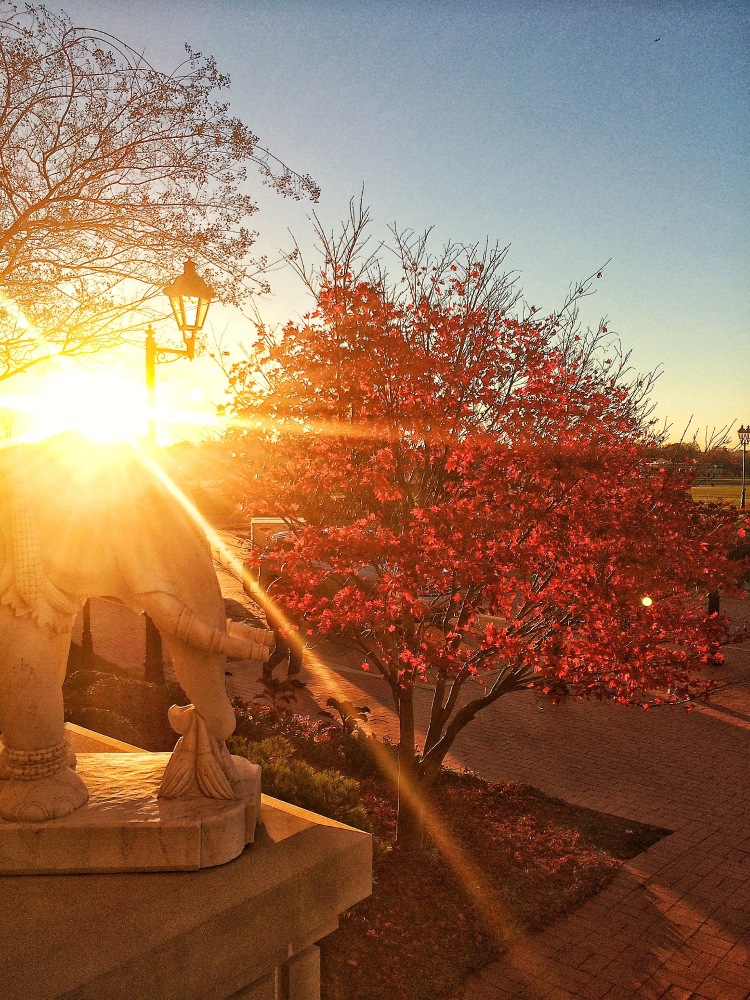 It was just about sunset when we got there.  Seth and I set up pretty quickly.  All Seth had to do was moss his tree. 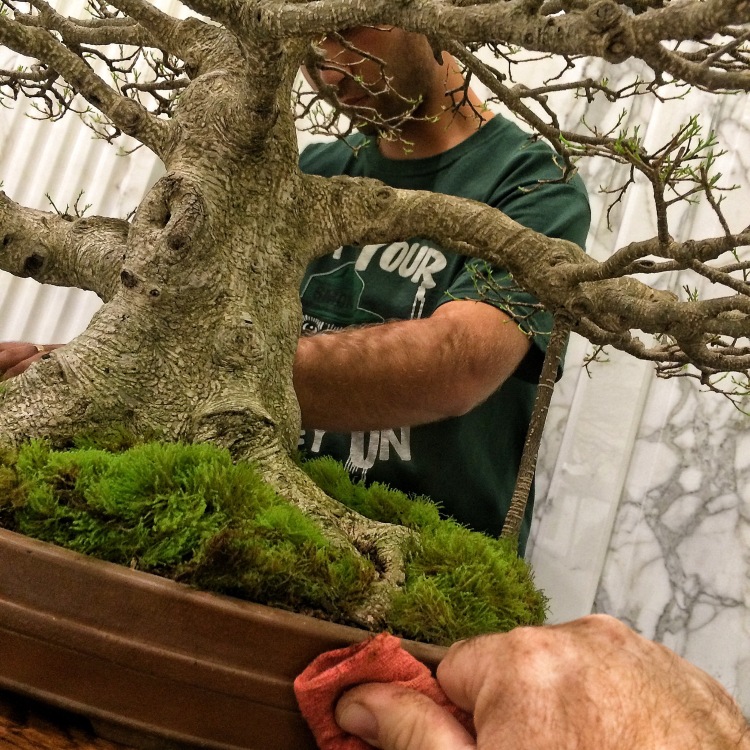 That’s Seth in the middle, Rob on the left and Angela on the right. Rob let Seth borrow a stand for the show.

I just had to make sure the angles were right.

Rob lent me the jita under the little haworthia companion planting. 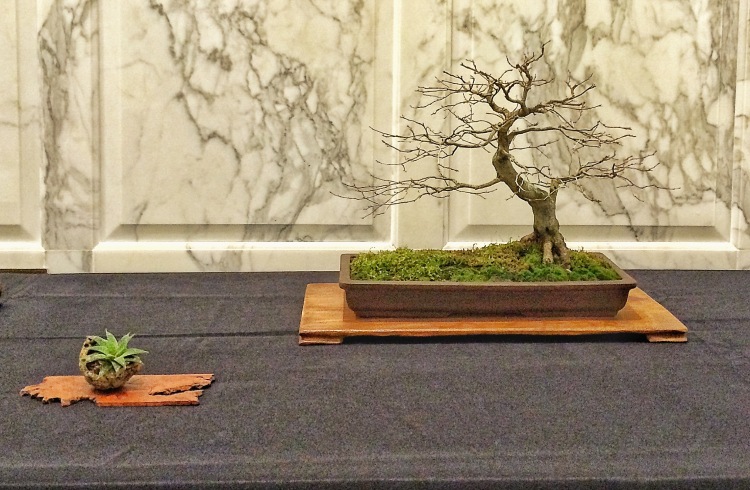 Rob, on the other hand, had a huge erection to handle………it was so hard…to handle, and so big, he actually required Sam’s help in the endeavor. 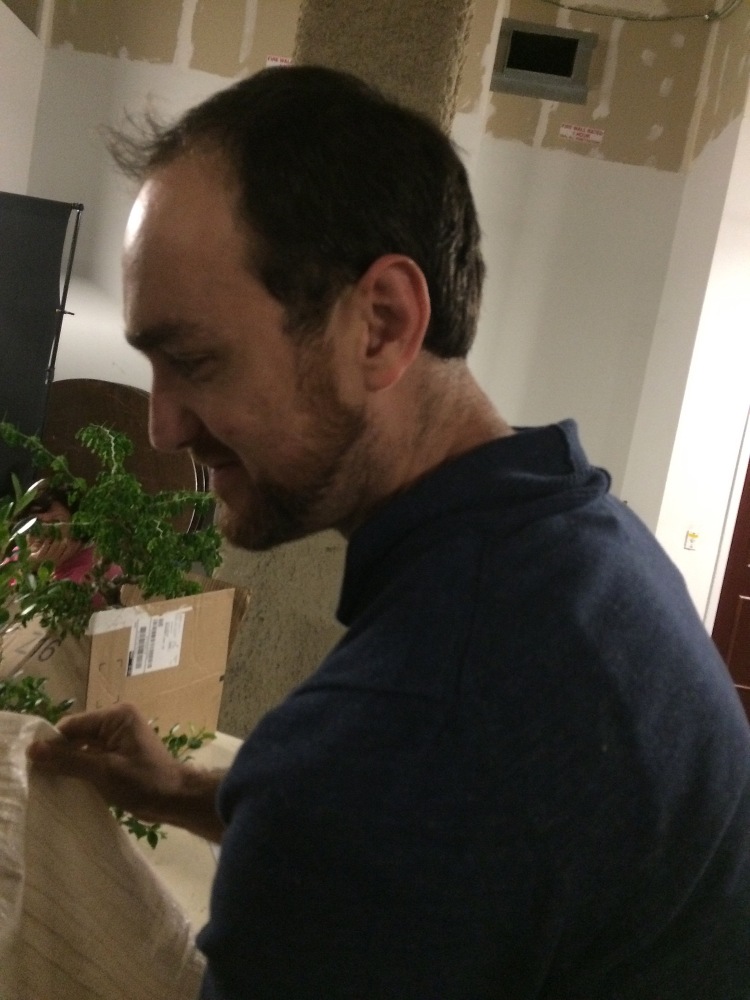 It went fast though, Rob is an accomplished screwer, from way back.

They had to repot two trees into their temporary “pots”.

In case you were curious, the title of the post is referring to this tree. That hopper that the ilex is planted in has a functioning pivot point and it’s balanced at the “static equilibrium”.

And then attend to the details. 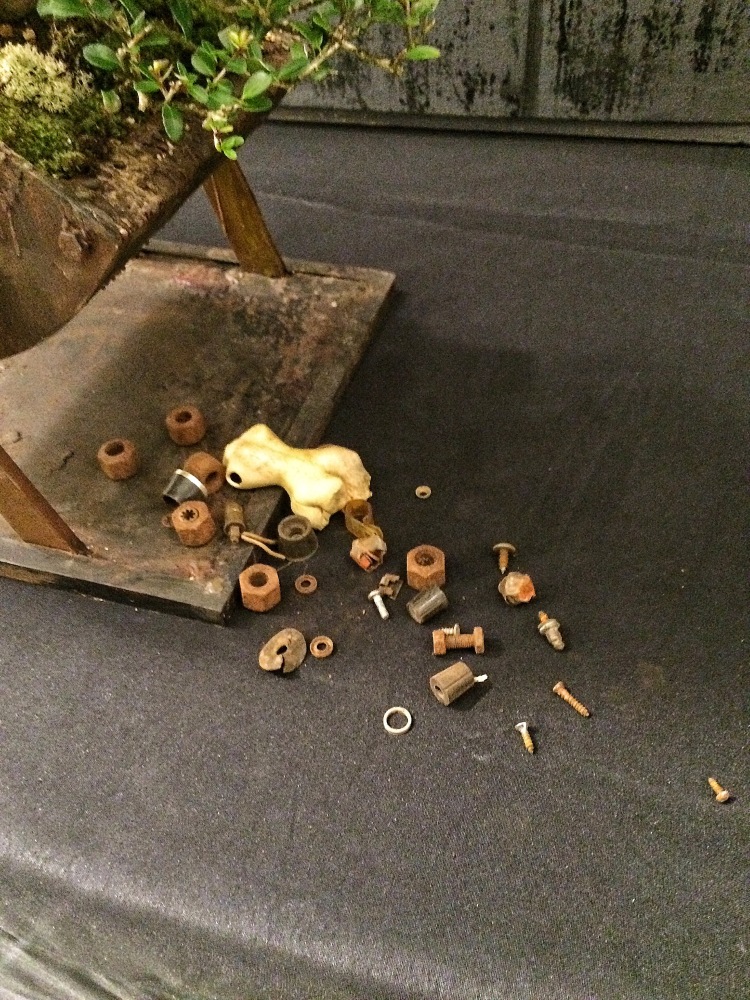 These were masakuni. Not to brag (but really, just to brag) the scissors half buried in the moss was my idea. 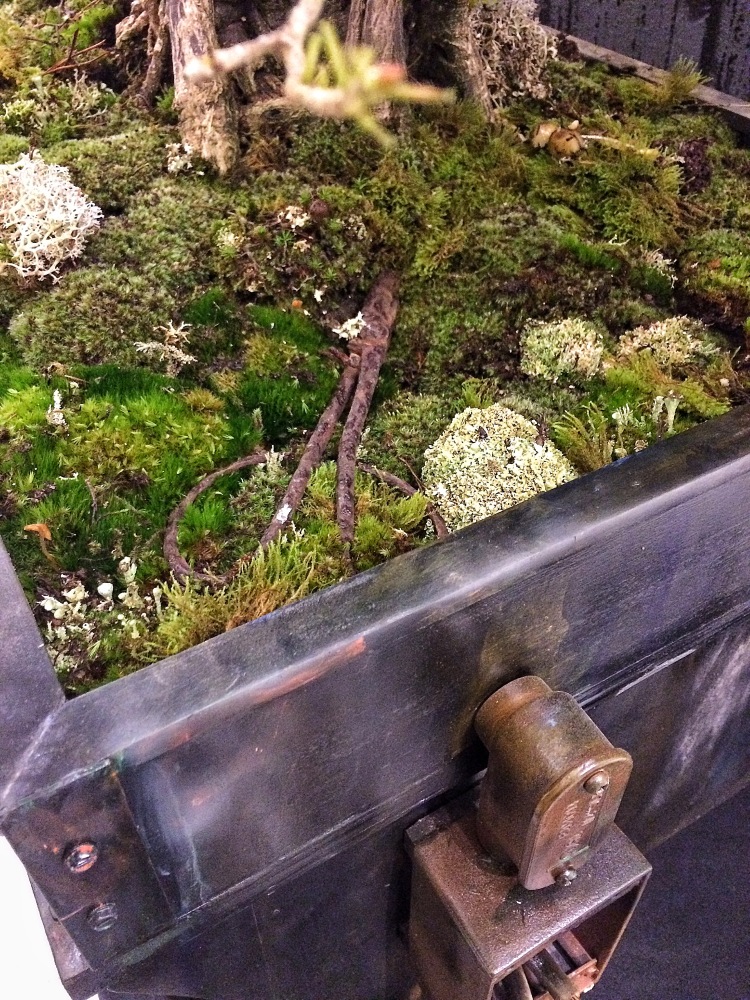 Seth and I played some uke while the two guys finished playing with the erection.

You could tell by the astounded looks on their faces just how mesmerizing the erection was. So big and…….big, sorry.
Finally, they were done. 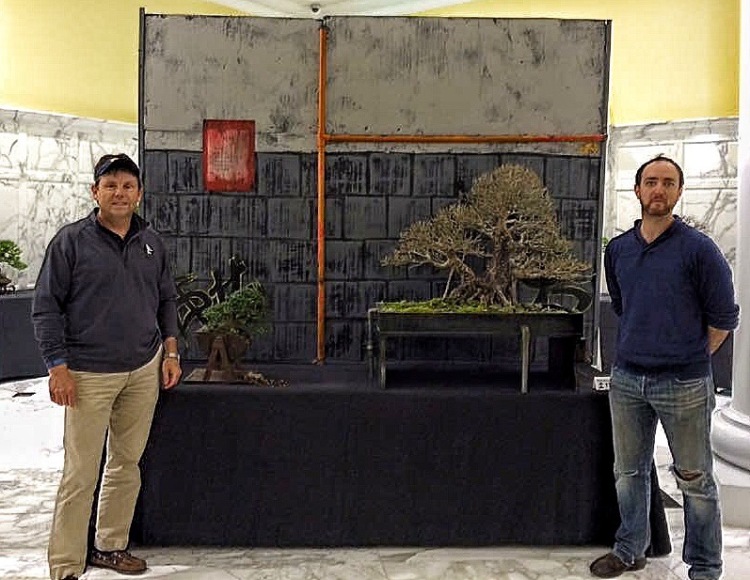 I’m not gonna tell you what it means.

That night, we stayed at Rob’s sister’s house in Charlotte.

Marlana and Rob. Rob is actually a twin. It’s hard to believe that there are two of them. Marlana and her hubby Rocko took good care of us while we were there.

The next day saw the opening of the show (you’ll have to wait for the next post to see all the trees, there were more than 60 of them!).

I feel for the photographer (Joe Noga) having to photograph all those trees and put up with fussy bonsai artists. He was saintly. Sam was the official helper. 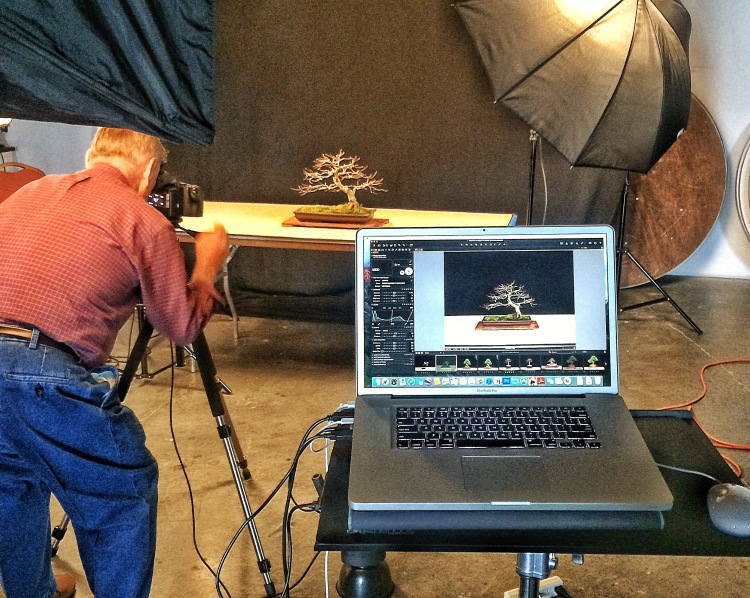 That night was the banquet. This is as dressed up as you’ll ever see me. 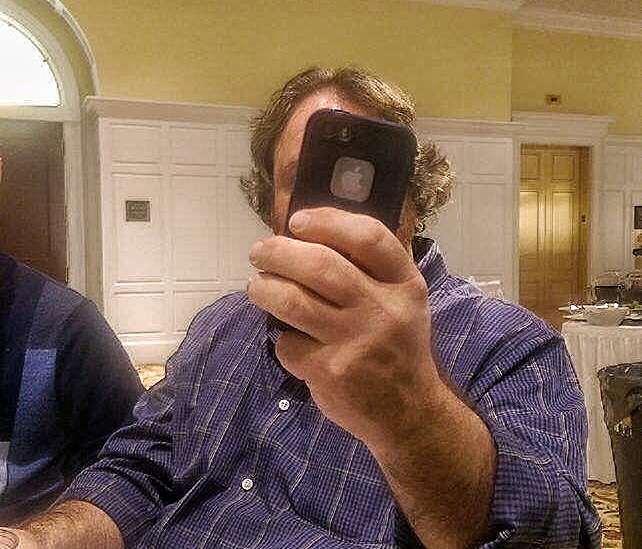 The two best dressed were, believe it or not, Seth and Angela. They got the title of bonsai-prom king and queen. 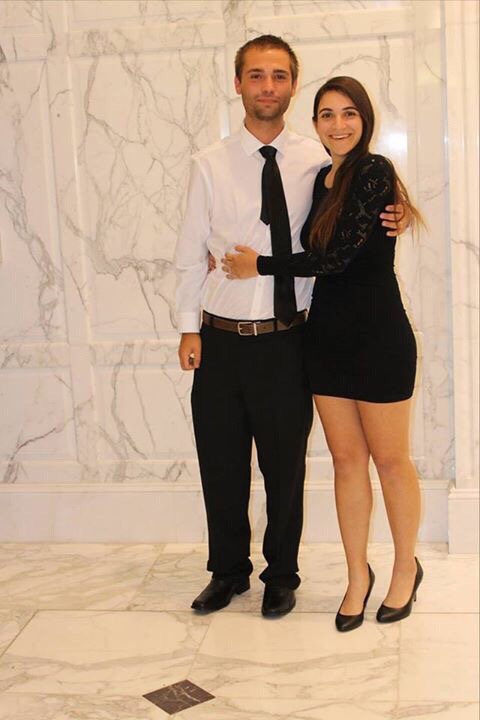 We need more young, beautiful girls…..I mean, people,  in bonsai. The next morning we went collecting with Rocko’s son, James.

It was a little cold that morning. Yes, that was frost.

The tree is some kind of native two needle pine.

It might live. Rob had inspired James when he bought a little euphorbia (just like mine)  at the show as a gift gor the boy. 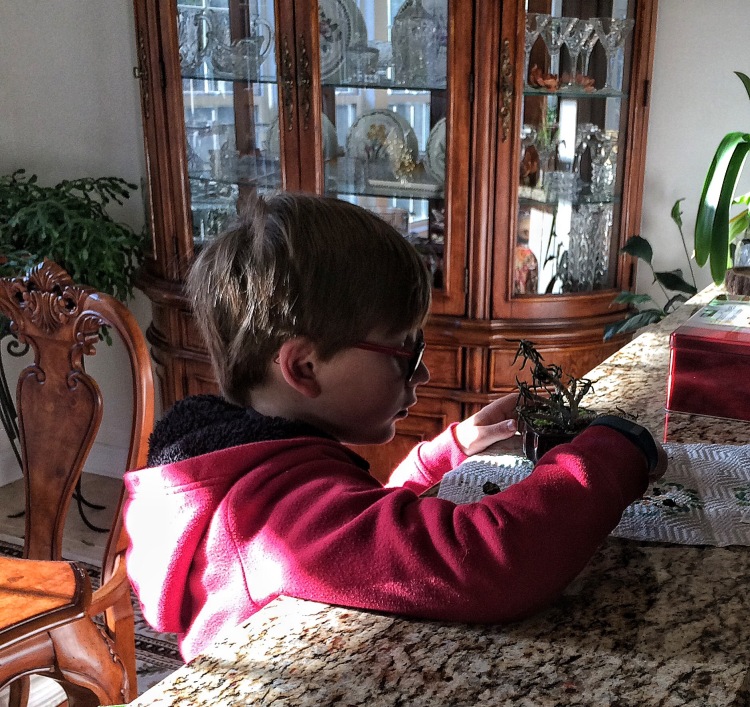 That’s Rocko in the background, along with Marlana and Rob. I can’t tell you what Rocko does for a living. If I did, I’d have to kill you.
I should talk a bit about the vendor area and the talks/demos that took place.

Owen Reich worked on an old elægnus. Bill Valavanis gave a PowerPoint presentation and styled a juniper.  Ken Duncan and John Geanangel put together a boxwood planting on a rock. I’m going to point you to Bill Valavanis’s blog for coverage of those programs.

I got some neato momentos from the vendors. 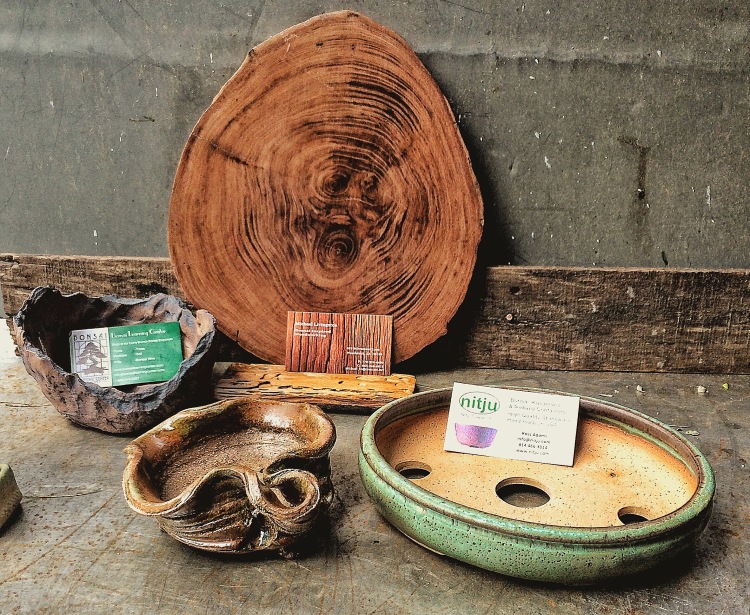 Can you see the face in the wooden slab? That free-form pot is by Sonny Boggs.

The last day, Sunday.  The awards were announced. There were four judged awards and a people’s choice.

I am proud to say that Florida took home three of them. 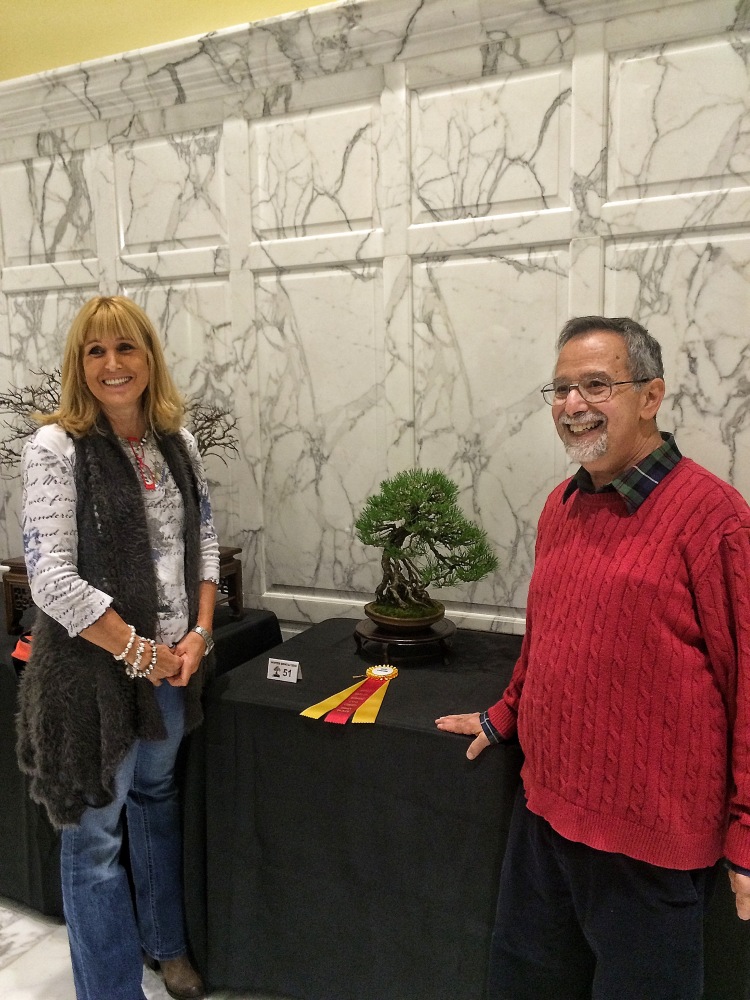 And lastly, but not least, our own Seth takes home the award for best broadleaf tree with Jim Smith’s ficus microcarpa “kinman”

“……the quality of bonsai in Florida is rapidly becoming more refined….”

I’m afraid they may not let us in next year!

Many thanks to Steven Zeisel and the many people who helped to set up/tear down the show. See you next year!

And thanks to Rob for letting me hitch a ride, and his sisters family for allowing us to crash in their home and for taking care of us so well. And thanks, Seth and Angela, for laughing at my bad jokes.