I tell you what, sometimes I live an interesting life. One time, when I was still in the Durable Medical Equipment field, fixing wheelchairs and such, I once removed a bougie for a guy, a big bougie, actually, which he let me keep, and still charged him for an inner tube and labor for fixing his wheelchair. 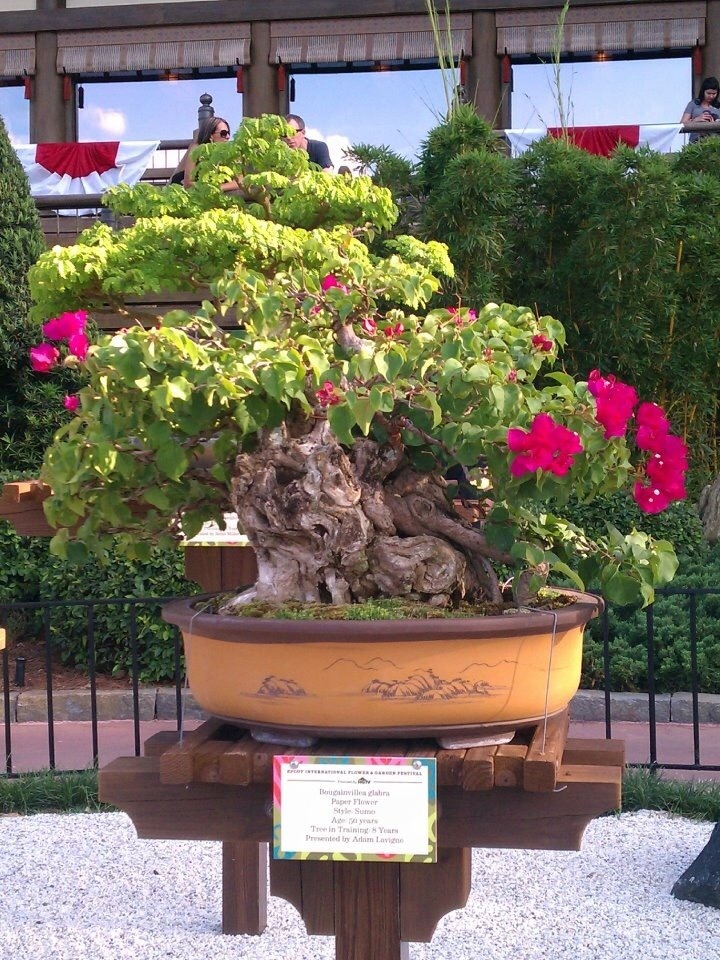 It was my first Epcot tree.

I know, I know, but the guy really saw me doing him a favor for getting rid of an unwanted plant than giving me a valuable bonsai.

But that’s another story for another day (yes, it’s about an 8 foot tree, not a shohin by any measure).

Today’s blog post is about an equally impressive tree, a schefflera that’s about 40-50 years old. This was how I first saw it. 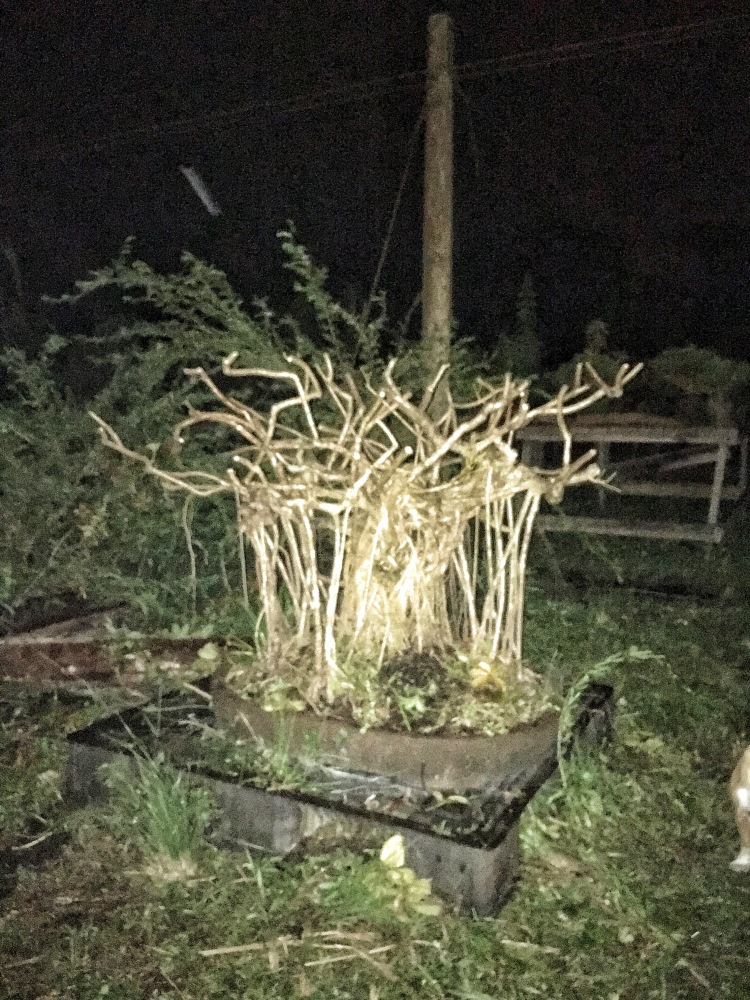 In the dark, at Jupiter Bonsai. There was beer involved. The tree belongs to Greg.  Somehow, I agreed to take his tree back home with me…

….and, either find a pot for it, or make one. So we loaded it up in the van (Don’t hate on my luggage, it was on sale at Target) and back to Orlando I went.

I made some phone calls, followed some leads, chased a few rabbits down some holes, but, alas, there was no pot big enough, for this tree, in the state of Florida. What’s the matter with the pit it’s in? Well, it’s a terribly faded mica pot from Korea.

Dave and my son unloaded it for me. They love me. 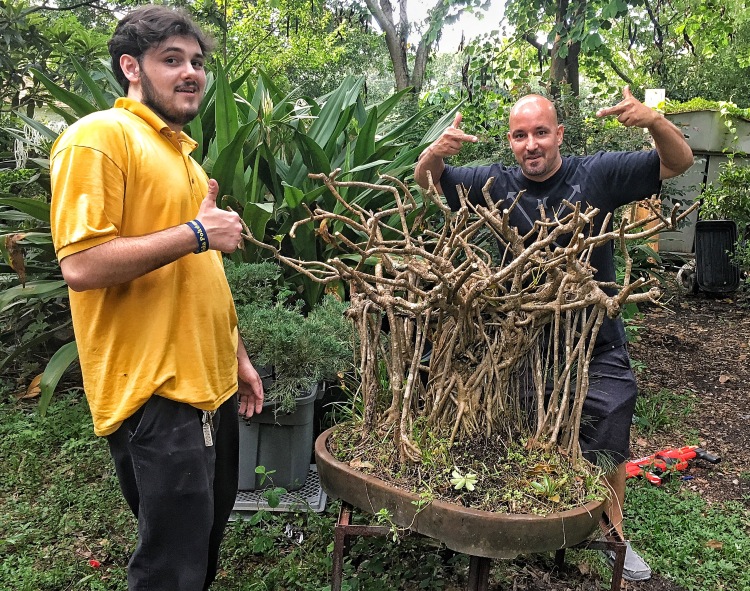 As for the pot, good thing I’m the creative type, right? And I have experience with making slabs out of concrete and using a new product called ShapeCrete. I did a blogpost on it a few months ago and I’m getting the hang of using it. I got this. I can handle the challenge. It’s just a matter of scale, right?

Here’s the tree a few weeks ago. 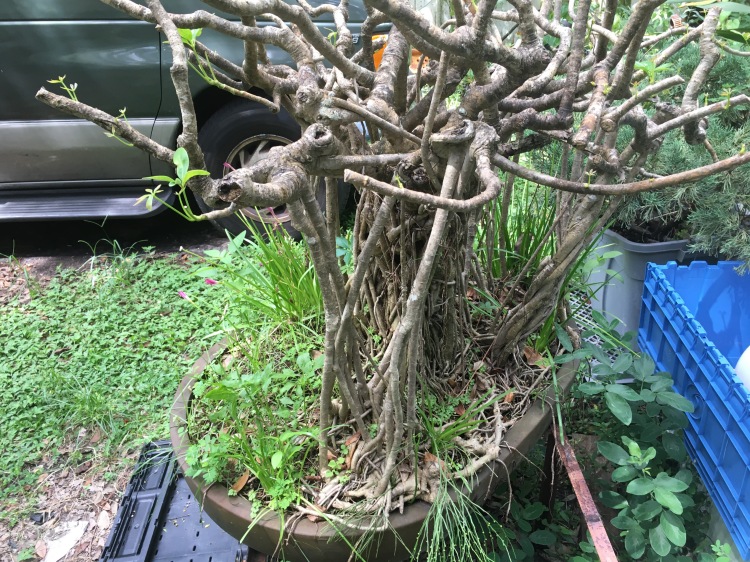 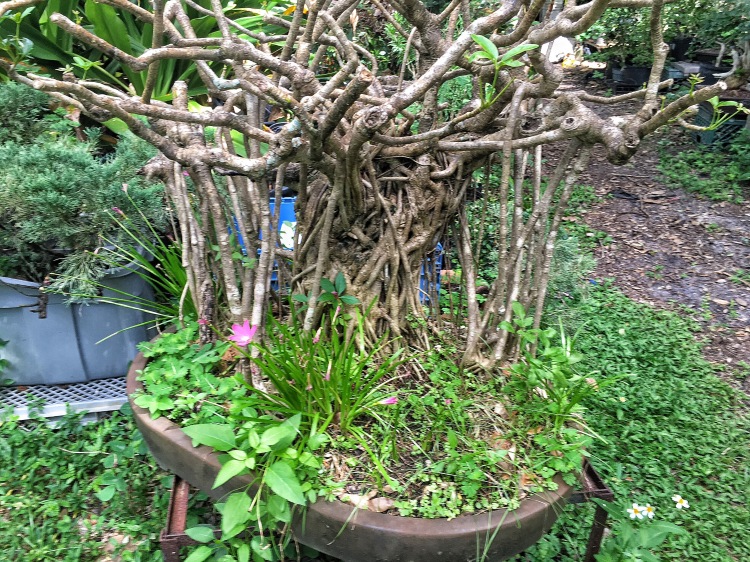 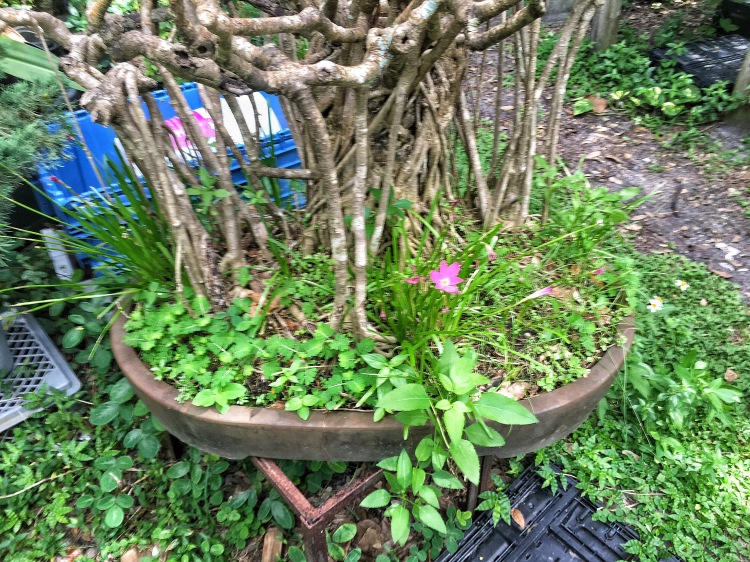 Measuring the pot, and the ultimate width of the canopy, 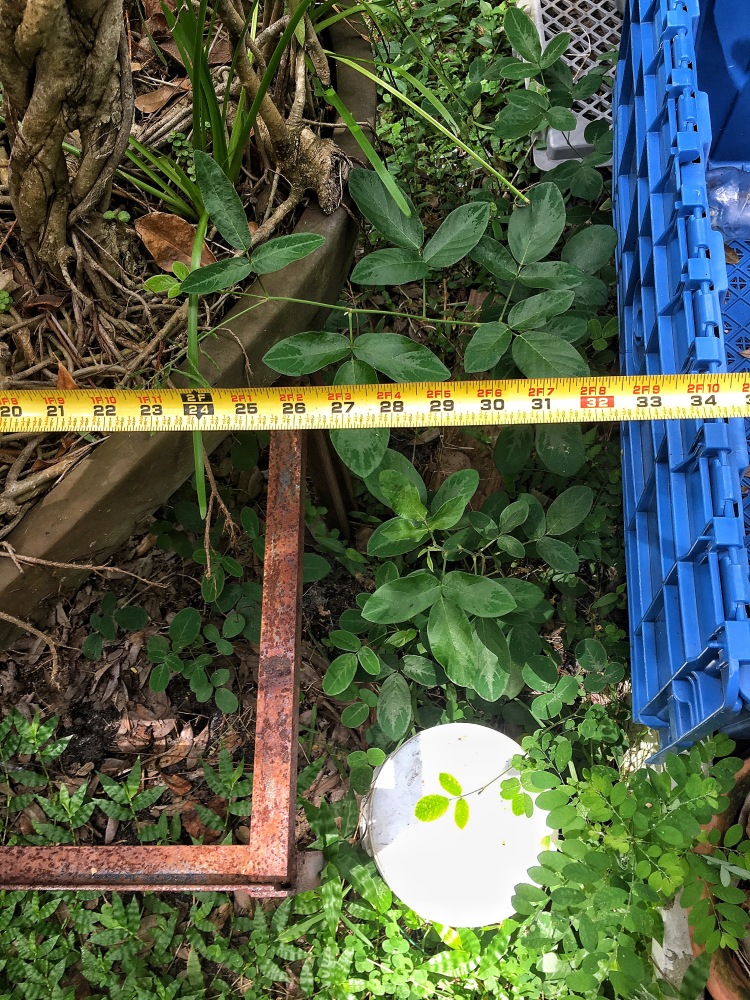 …….I’m guessing the new pot needs to be something like 28″x 41″ or so. And this will be a pot, with sides and drainage holes, as opposed to a slab. For a few reasons. First, I don’t like slabs much. No offence to you slab lovers out there but, I don’t know…..it seems too easy. Secondly, a concrete form with edges will be stronger and less prone to breaking because of structural integrity. That’s why I-beams and tubes are used to build structures as opposed to solid bars.

In order to make edges for the concrete, because it is technically a liquid until it cures, I’m going to need a frame. And, like all good craftsmen, I will do my maths on the wood.

It’s always cool to find writing on the studs in the walls of my old, 100 year old house.

The next few pics are self explanatory, I think. 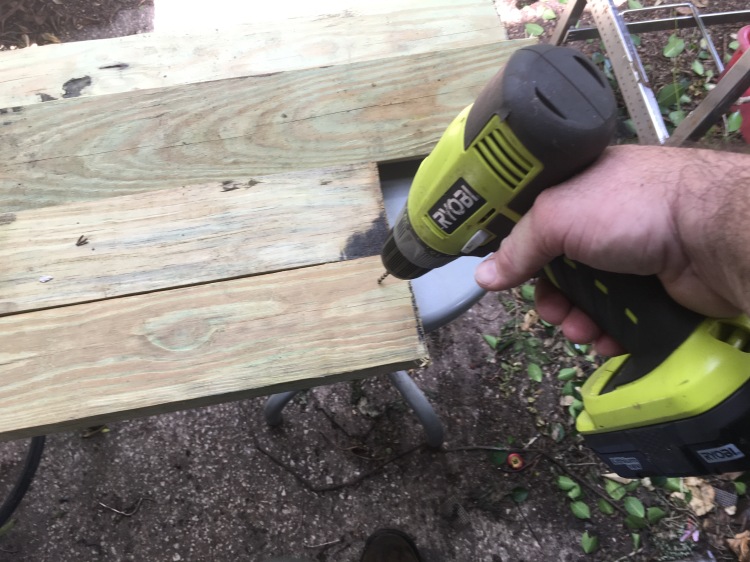 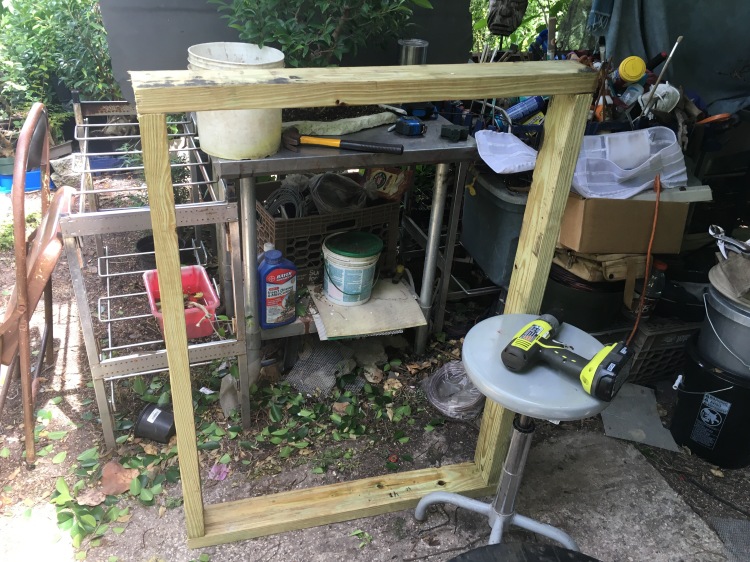 When I’m done with this pot, I can use the frame to build a bench top. 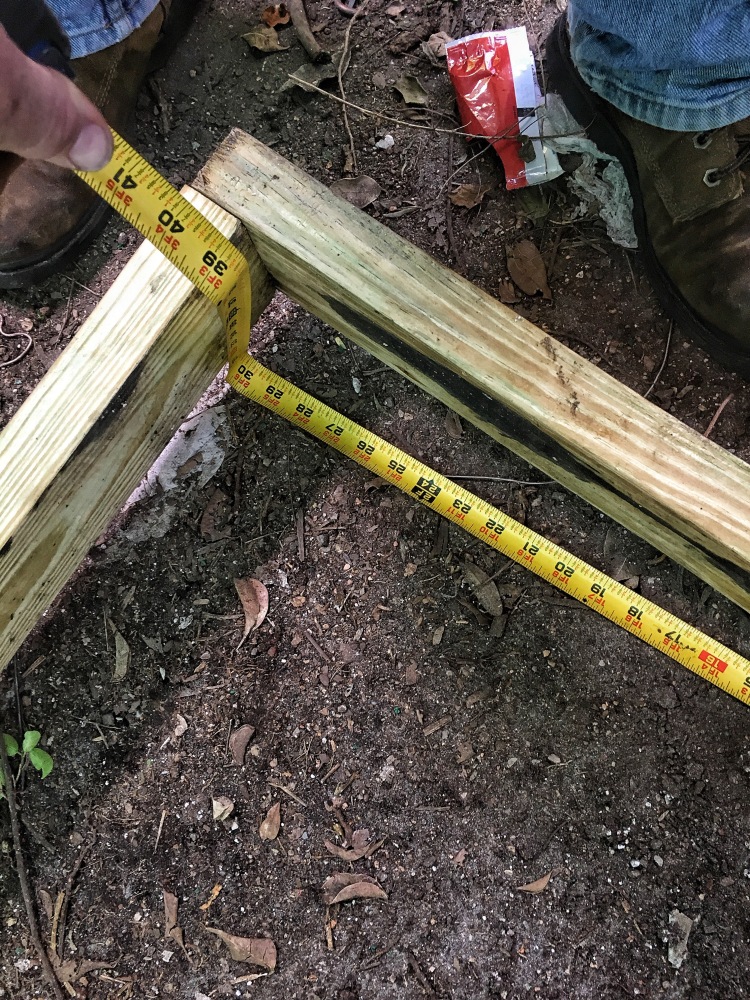 Looks about right to me. 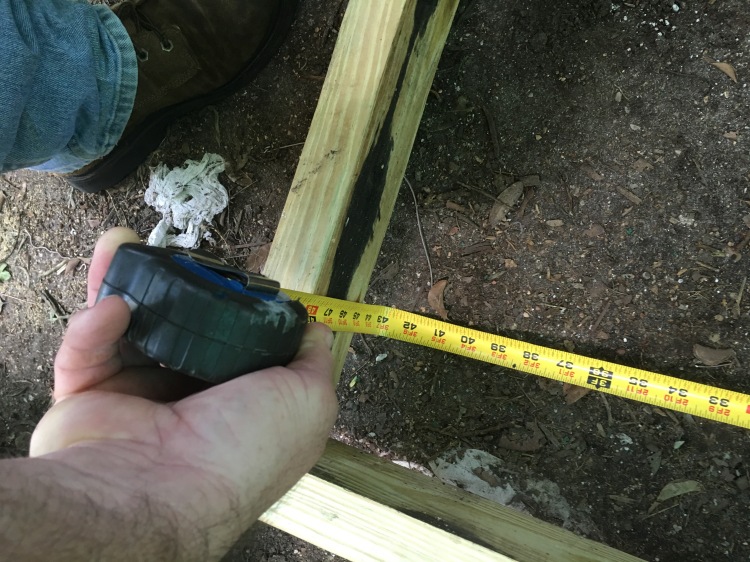 The pot’s edge finish I’m going for is in the same style as my “sexual chocolate” pot from the first ShapeCrete post (you’re gonna have to go read it now).

Which involved using a plastic sheet to roll out the ShapeCrete on and then place it into a form.

You need to roll the concrete out bigger than the frame so that, as you lower the sheet into the wooden frame, the sides are formed. 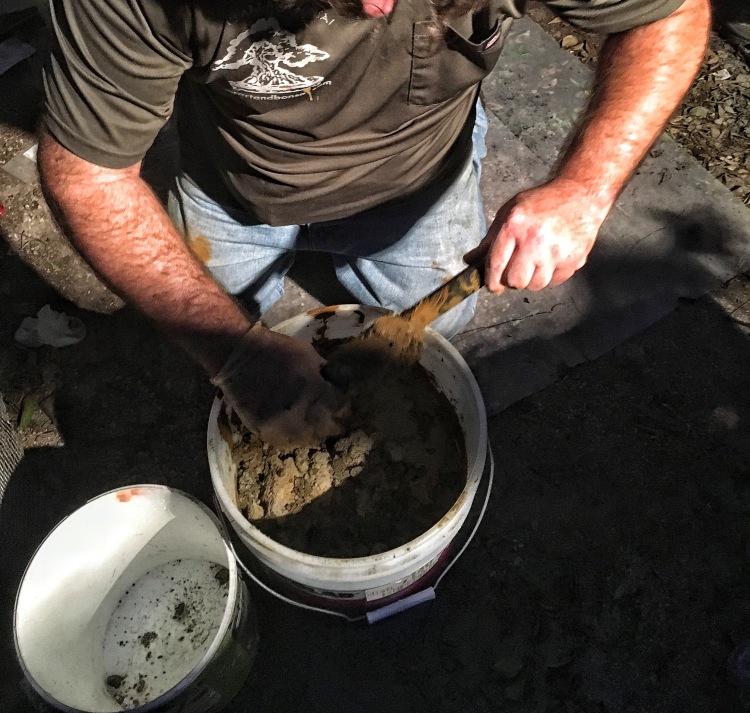 I ended up using 60 lbs, dry weigh the, of the ShapeCrete, to make it.

I love this product. It  has accelorators added to make it cure rock hard in about 24 hours. 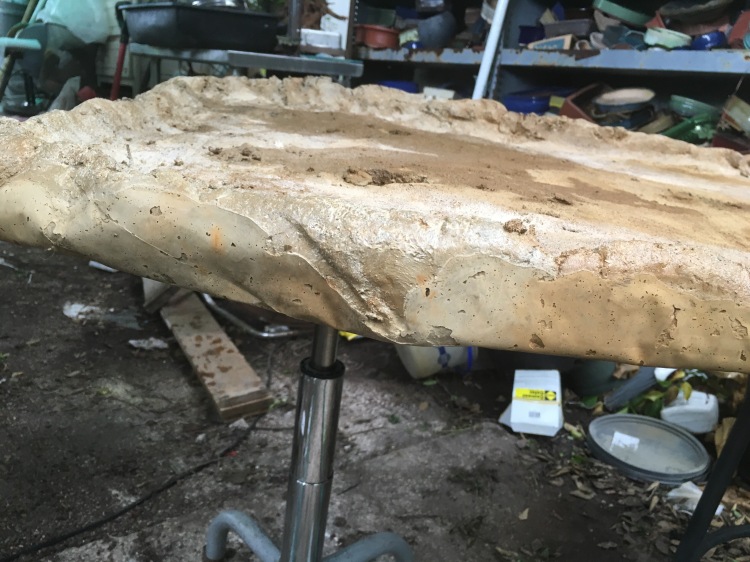 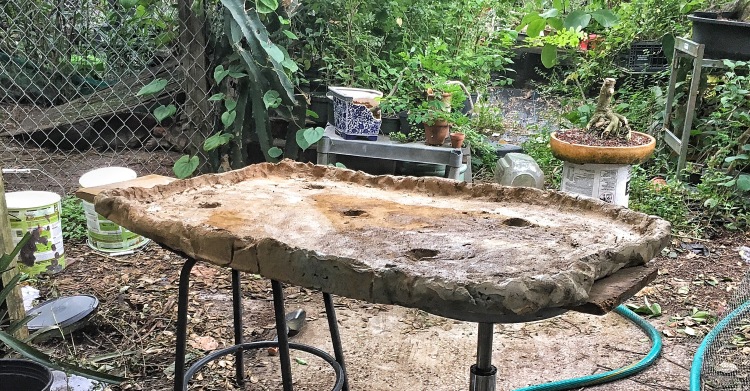 It cures in 24 hours but doesn’t reach full strength for 28 days. And you have to soak it in water to leach out the alkalinity for a week or so.

Some of the things I did waiting for the pot to cure. 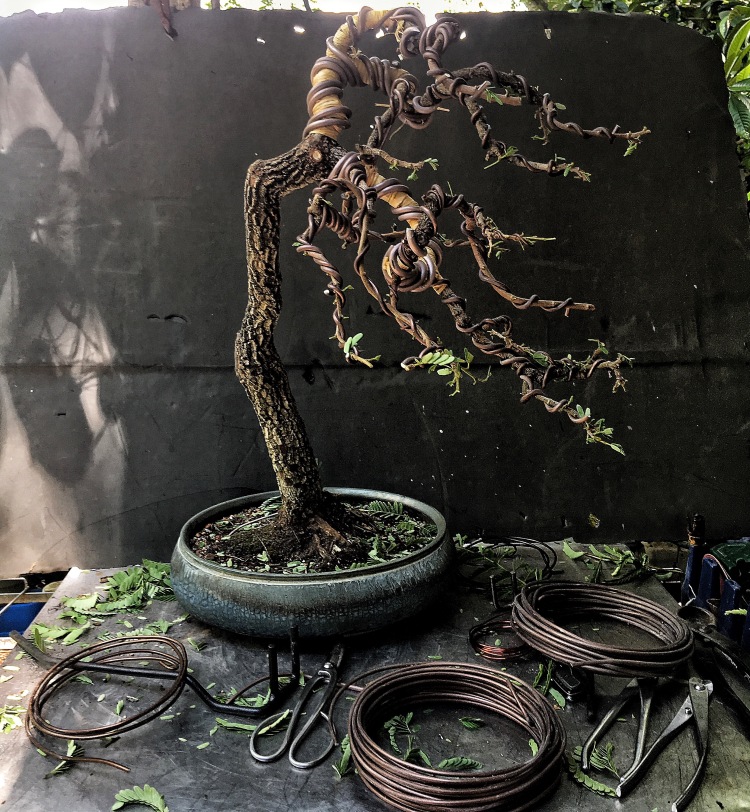 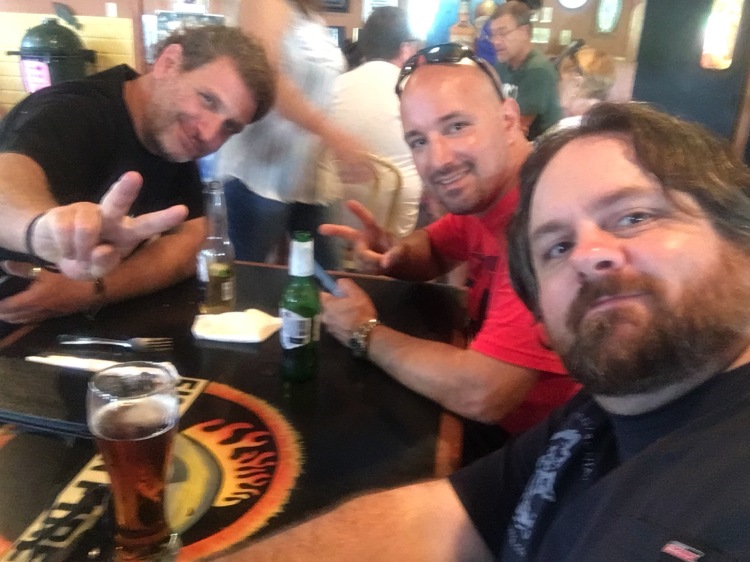 I feel like a woman waiting for her menses. 28 days. A lunar cycle. My birthday, if it was February. And finally, it’s time to pot the tree. 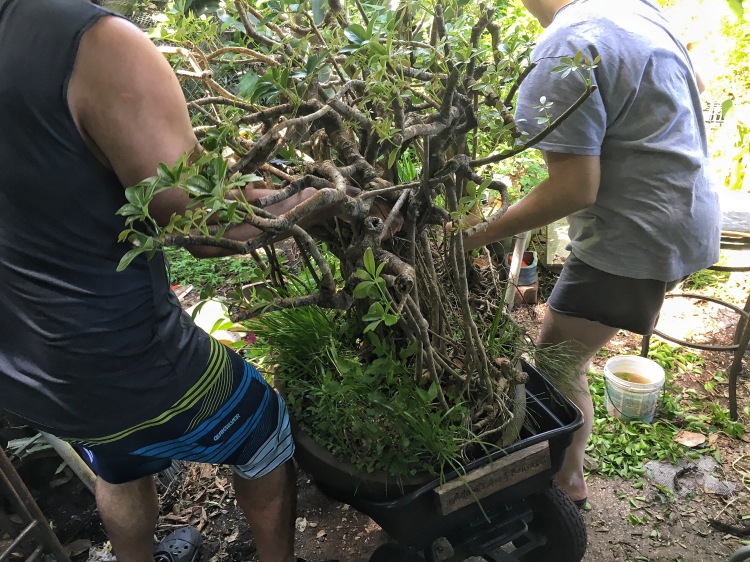 It took me a little more than an hour to weed this beast.

The rain lily bulbs were on the bottom of the root ball, under all the roots. 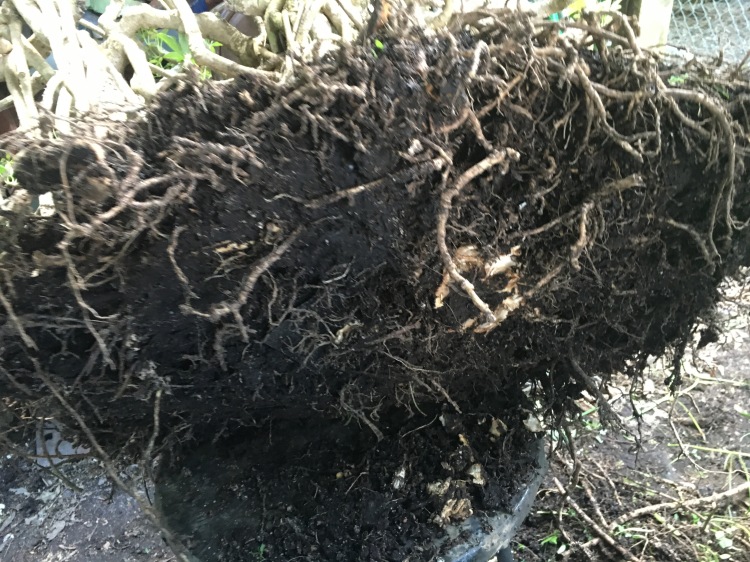 I had to pull them out from the bottom. 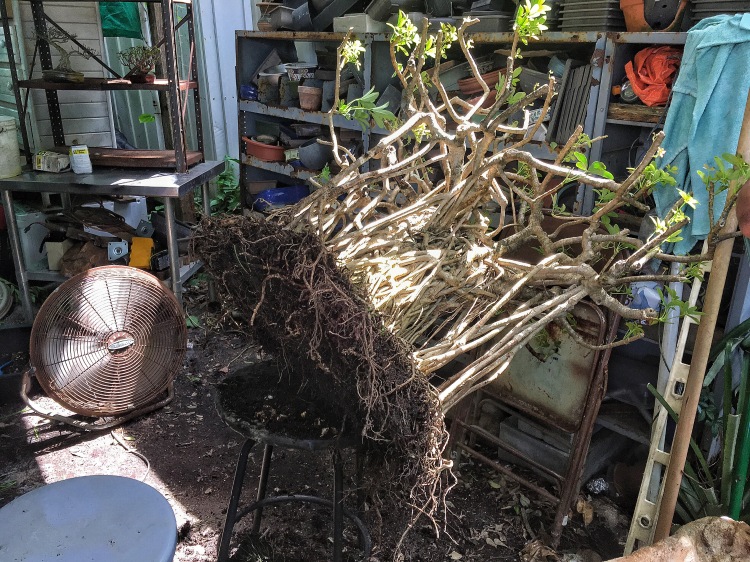 And the soil was muck. Nasty stuff.

A quick hosing washes most of it off. It had a lot of roots. Understatement of the year.

We prepare the pot.

A good layer of fresh bonsai soil and…. 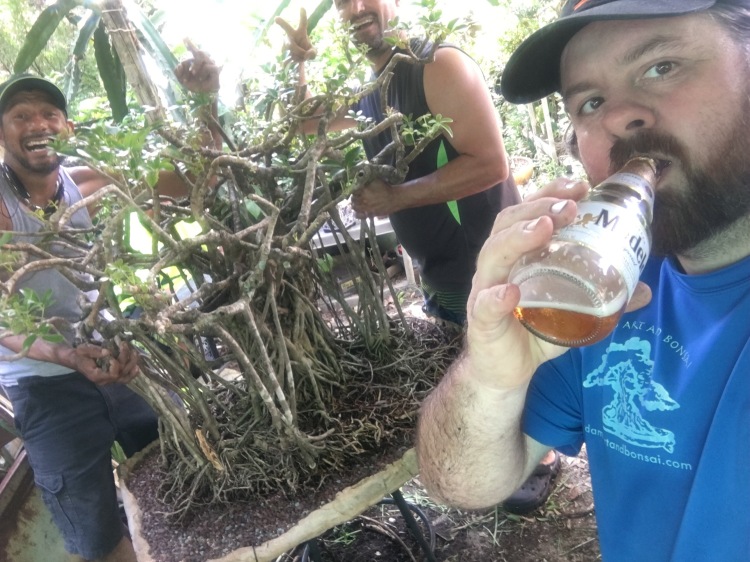 after a little liquid refreshment…..

I think it fits! And it’s not as heavy as you’d think.

Guaracha is just showing off his muscles.

We move it (actually, Guaracha and Dave moved it for me. I’m not supposed to lift more than a gallon of milk, thanks pendejos!) they reminded me, it’s usually the best idea to wait to water it until it’s in place.

It took about 8 gallons of soil.

I love the finish and the color.

It just needs to fill in more and maybe a little wiring. And then I have to deliver it back to down to Southeast Florida.

That should be fun.