I wasn’t going to write a blogpost on this tree but, interestingly, when I posted it on the Socialmediaverse, I got a bunch of people asking me to do a write up. 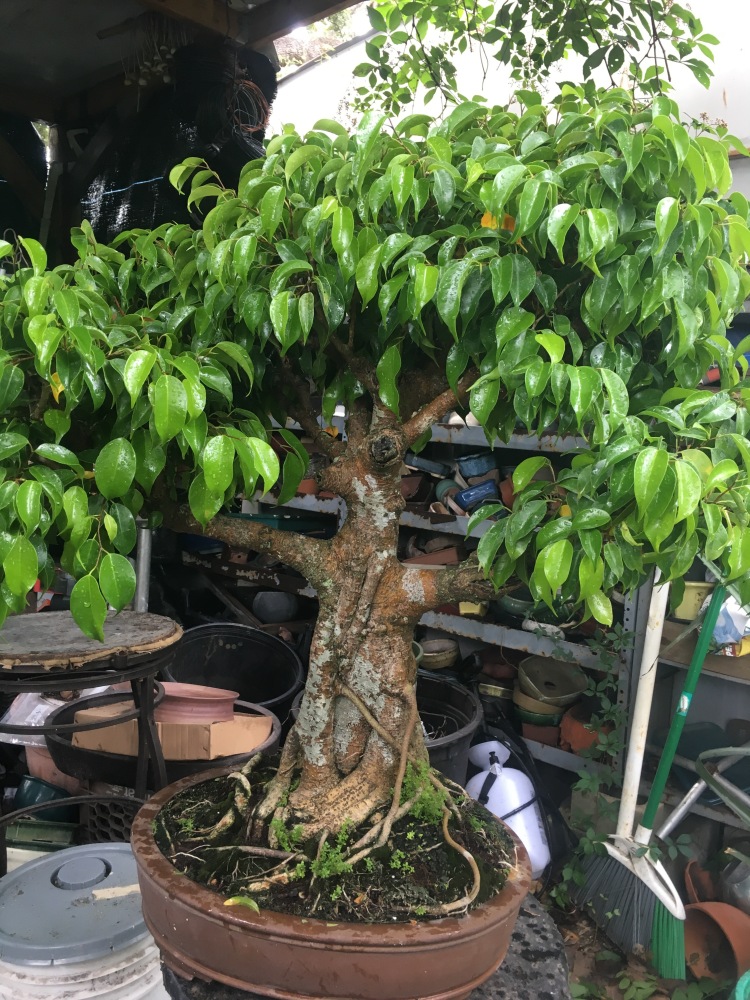 It belongs to Cosette, who got it from her dad.

My job is to style it so that Cosette likes it. At the moment she doesn’t.

As some of you may know, the ficus Benjamina is not a well liked tree in the bonsai scene in the West. Not talking about Japan, because there aren’t many Japanese nurseries that use any ficus (though Kimura has one) but in the East, it’s used extensively, especially the southeast Asian countries.

In the West, I believe the contempt is two fold. Firstly, many people consider it an indoor houseplant. And once you describe a tree that can withstand being indoors,  there’s a knee jerk reaction against it (to explain what that means to the non Americans, knee jerk is referring to a reflexive response that has no thought, reasoning or even emotion behind it. It may have begun with those things but the response is now conditioned so that when one might say “hello” you reply “hi”). But there are many plants we use for bonsai that can be indoor plants. It’s usually the understory trees (meaning they grow under taller trees) that work best. A notable example: azaleas. Yup, the classically Japanese bonsai subject that usually ranks very high, if not at the top, in lists of the most beautiful bonsai in the world, can be grown indoors.

The second reason people dislike Benjamina as bonsai is their propensity for dieback. This post will describe a technique for the proper pruning to minimize dieback. But to address the prejudice against Benjamina simply because of the dieback, let me give some examples of other, notable, bonsai subjects with significant dieback: maple species, bald cypress, pine, juniper, and several other species of ficus. Now, before you all get wrapped around the axle about me including pine and juniper in that list, I know what your arguemebt will be: one has to learn the proper pruning techniques when working with them. And I think I mentioned, about 60 words above, that there is a proper technique for pruning Benjamina.

Amazingly, it’s very similar to how one deals with a juniper.

When doing a clean out before pruning, remove any interior branching and old or damaged leaves. 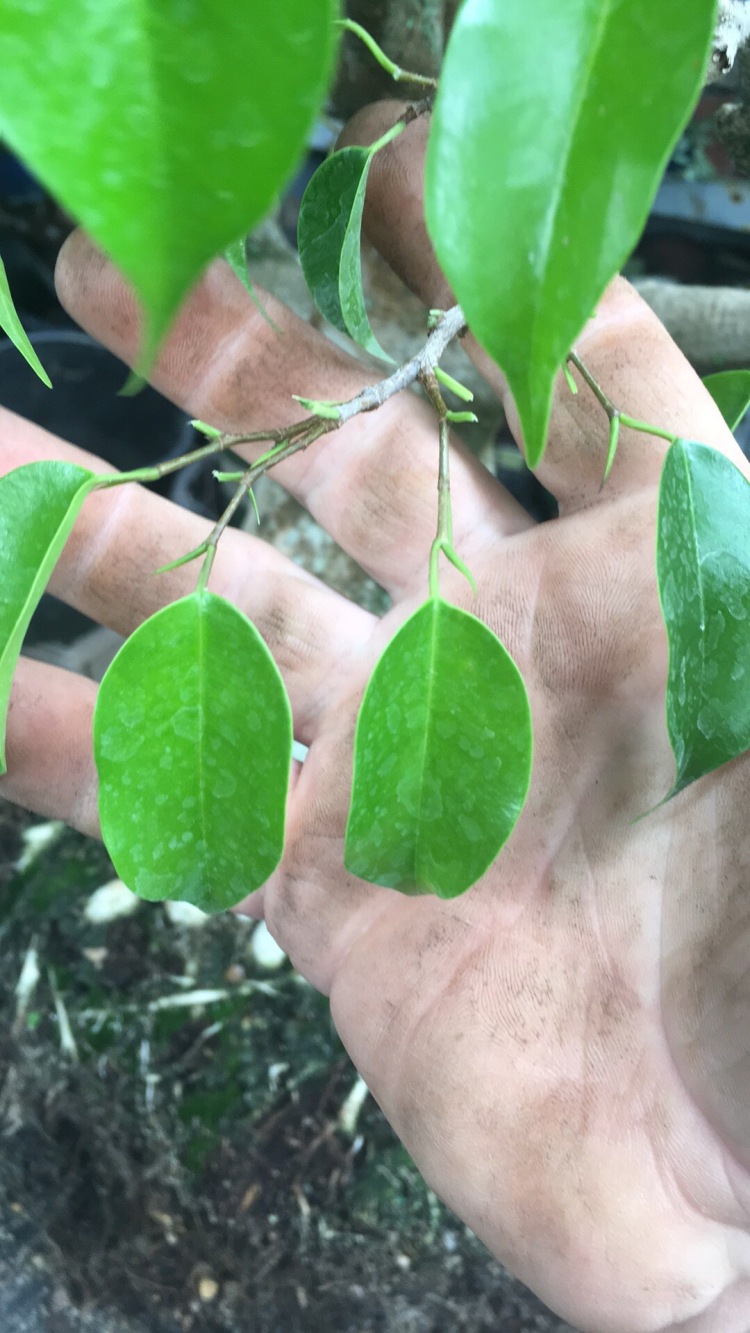 But leave growing tips. On a ficus they’re called a stipule. Those are the pointy things at the base of the leaves on the above picture.

These would be the interior leaves and branches to remove. They do nothing but take energy from the plant, being as they don’t get light, just like on a juniper. Get them outta there.

There is an Achilles heel, much like spider mites on a juniper, that Benjamina have. They are the first to get a bug called a thrip.

You’ll know it by the leaf folding in half. Prune off those leaves and treat with a systemic insecticide.

Here’s the tree just about cleaned up except the top left. 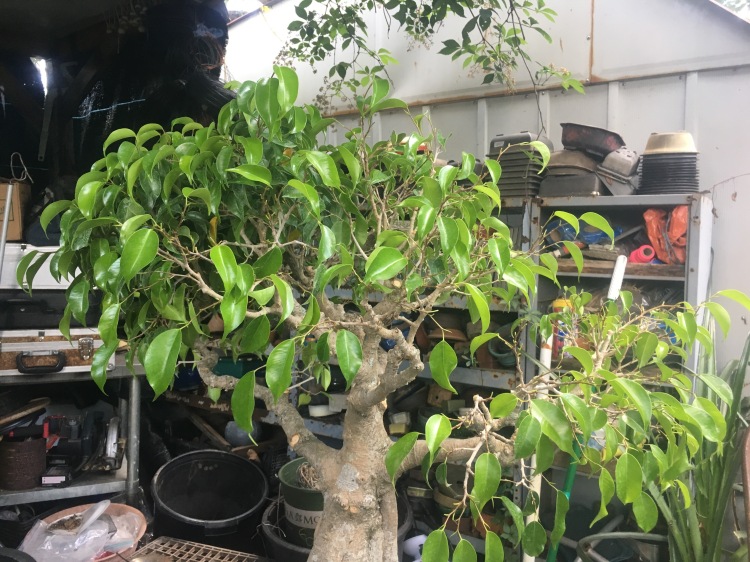 I can, for the sake of brevity of work, just cut out some of the branches I won’t use in the final design.

The question now is, how does one do that to minimize dieback?

Same as with a juniper. Cut to another branch with strong growing tips.

Now to get rid of some larger branches.

By leaving the strong growing tips, I’m not worried about any serious branch dieback. Time to do some chopping.

Here’s where I get to brag a bit about the Benjamina. It heals wounds faster and better than most ficus.

I’ll get to that in a minute. First though, a repot. 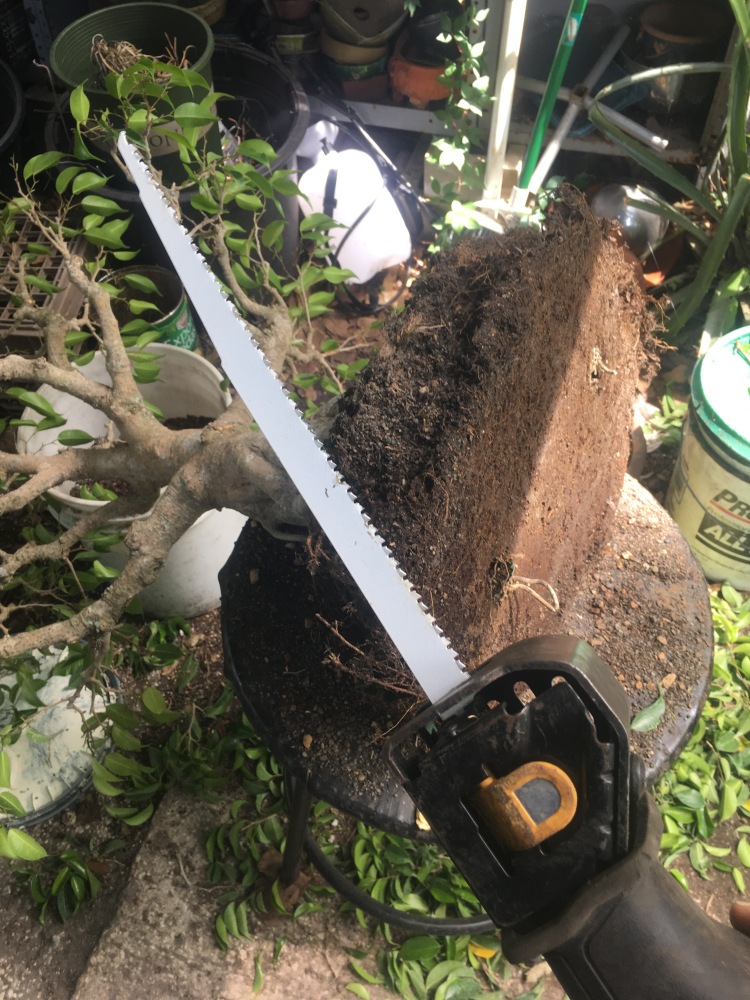 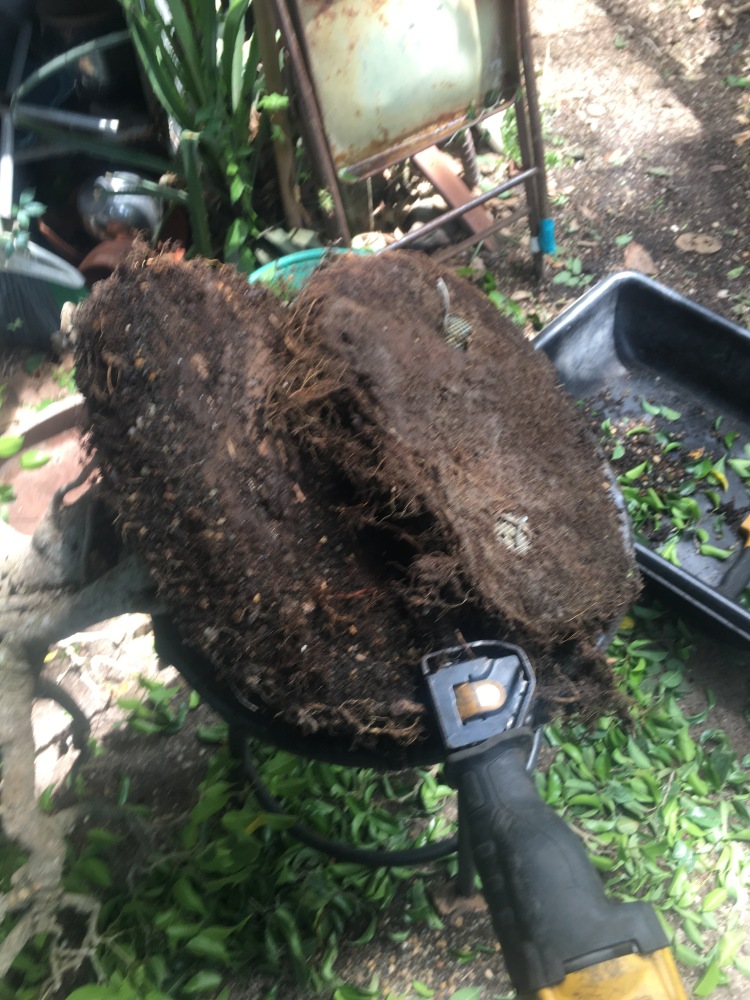 That’s right, the good old reciprocating saw manuver. It’s one ficus I use it on when I need to reduce the root ball.

If there’s one mark, one legacy I can impart on the bonsai world it is this:  Please untangle your ficus roots! 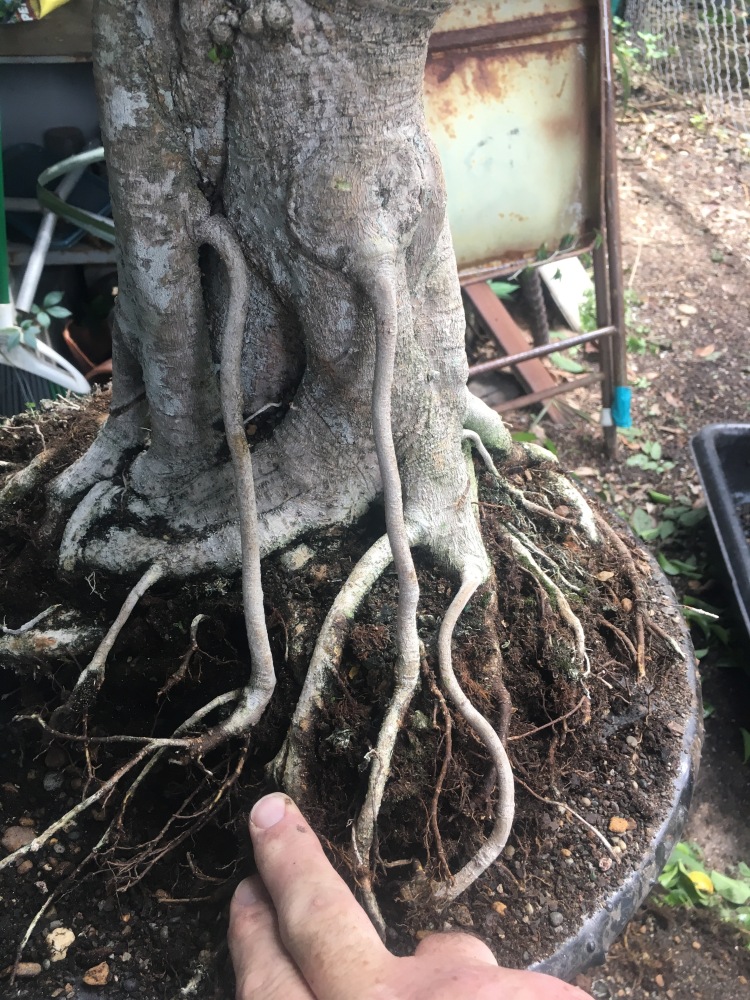 On a Benjamina, which grows the best trunk and nebari without the need for grafting, it’s just a matter of straightening them, pushing the roots against the trunk, and tying then down. 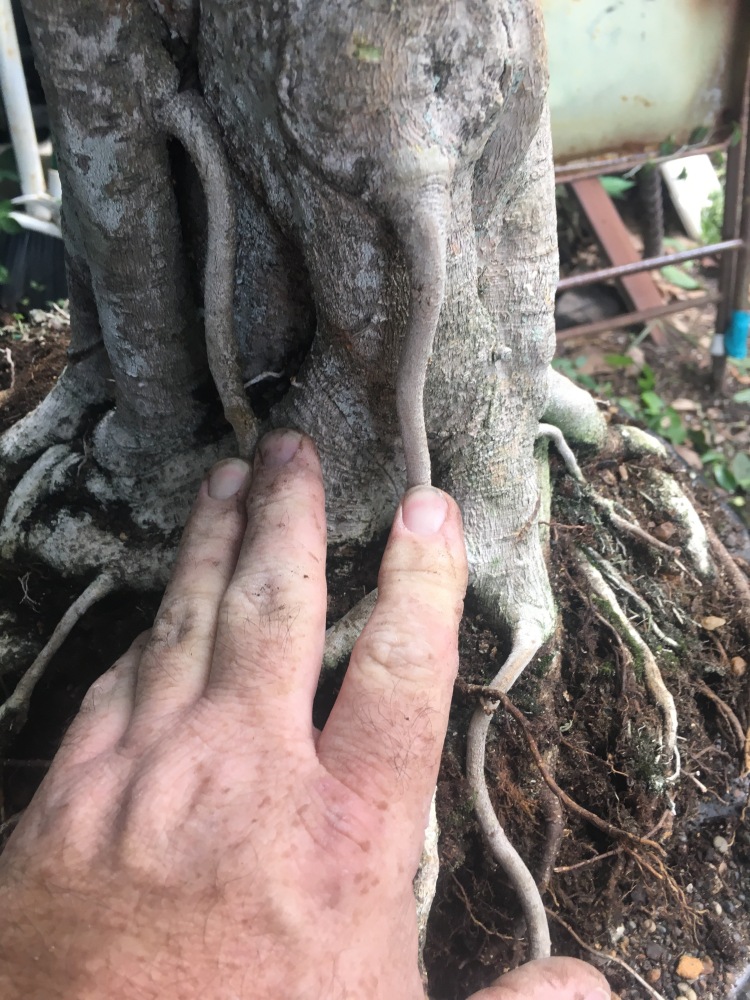 On the front of the tree you can see how well they fuse. 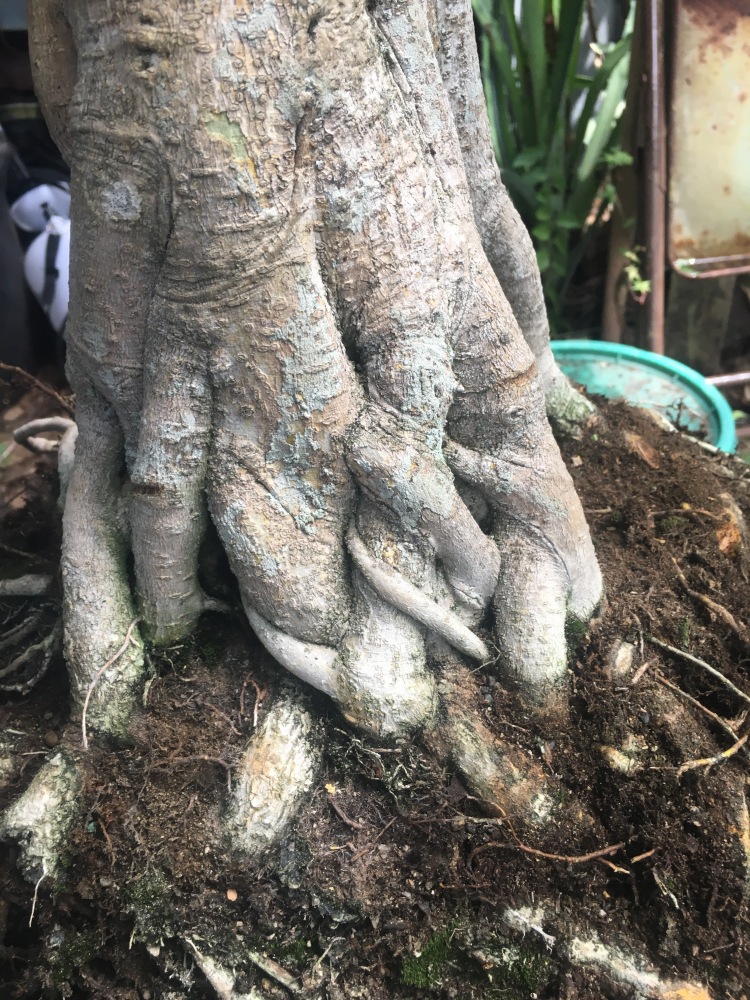 It makes for a twisted and mature look on the trunk.

I don’t like these crossing roots but I can’t do too much about them now. 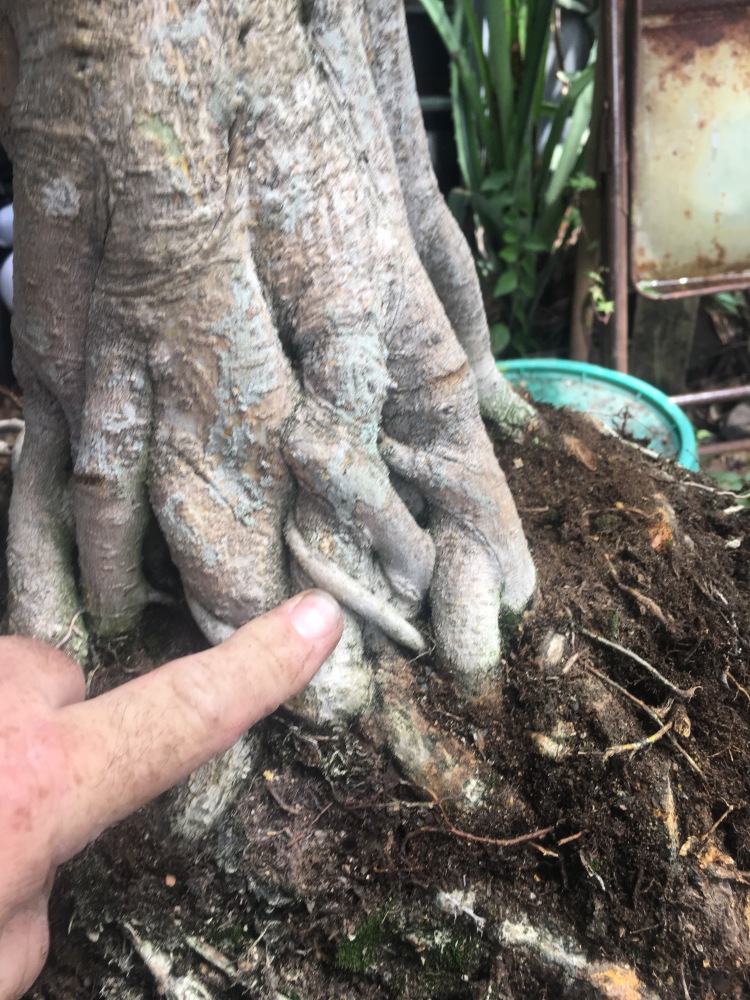 If I cut them out it would look terrible, they’ll flatten out in a shorter time than closing the wound from any editing I do.

Tying down those roots. 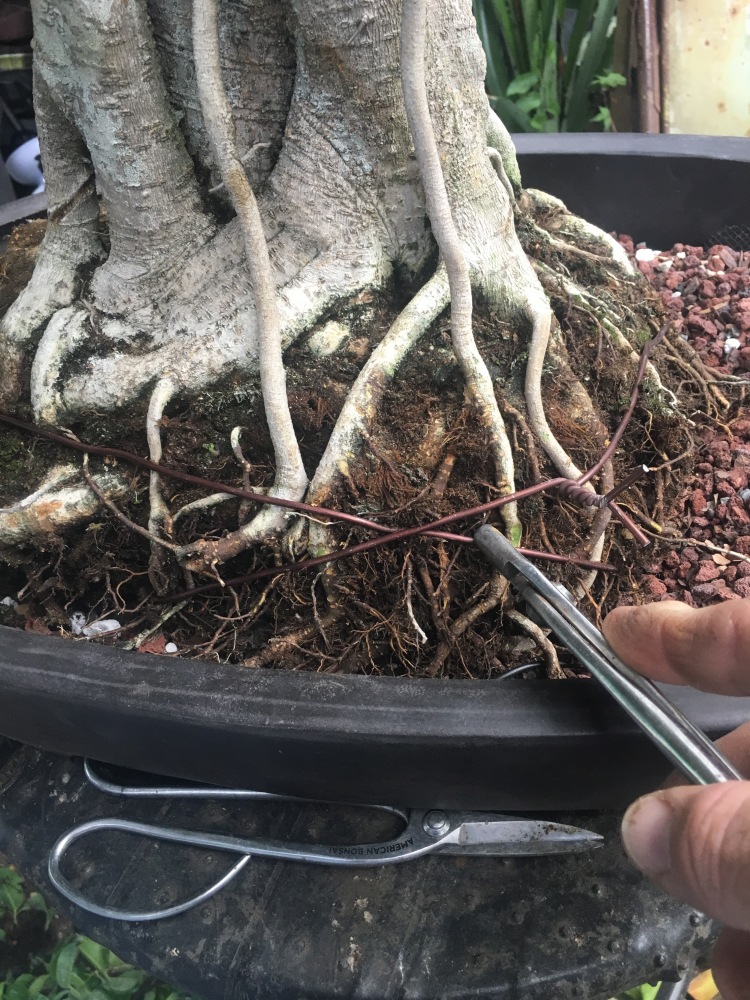 To me, it looks like a scarecrow with those two heavy branches so close on each side of the tree.

One has to go. Let’s chop of the left. 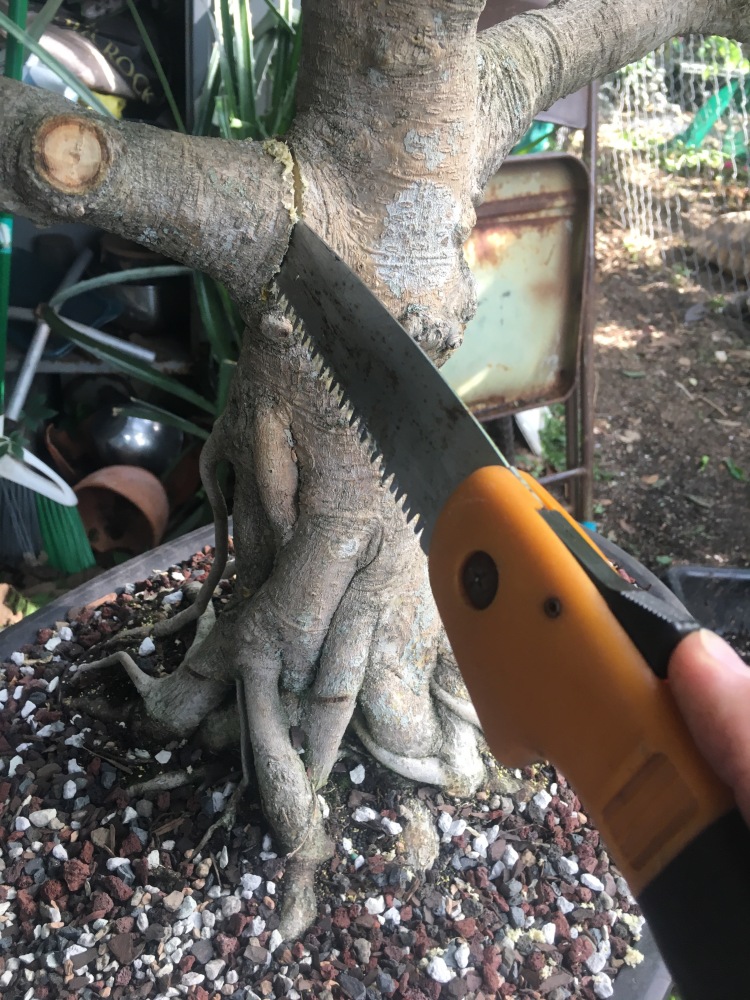 I’ll be using some duct seal on the wound, after some carving out of course.

After the knob cutter.

Get out the big gun.

Smooth……ish. After the mini grinder and a sharp knife.

The “eye” shape helps the sap flow better in order to heal the wound faster.

Here’s are some other wounds I cleaned up as well. 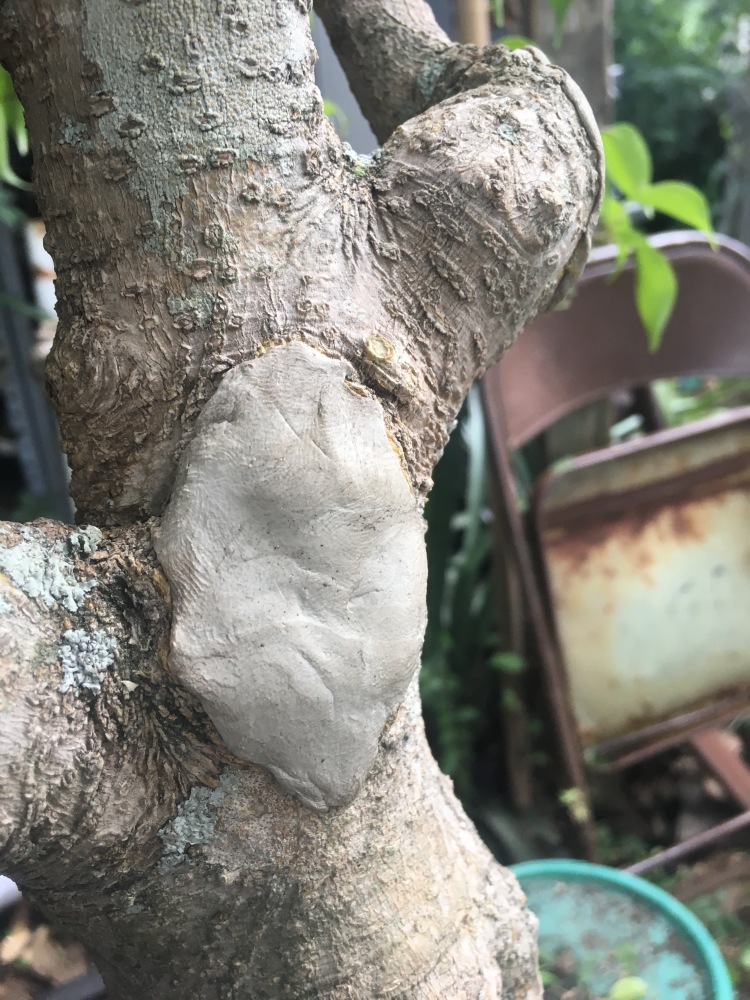 That grey putty is the duct caulk.

How about some wire?

This is the only big branch that needs moving. It’s in the back but it’s parallel to the trunk plane. Parallelism isn’t pretty. 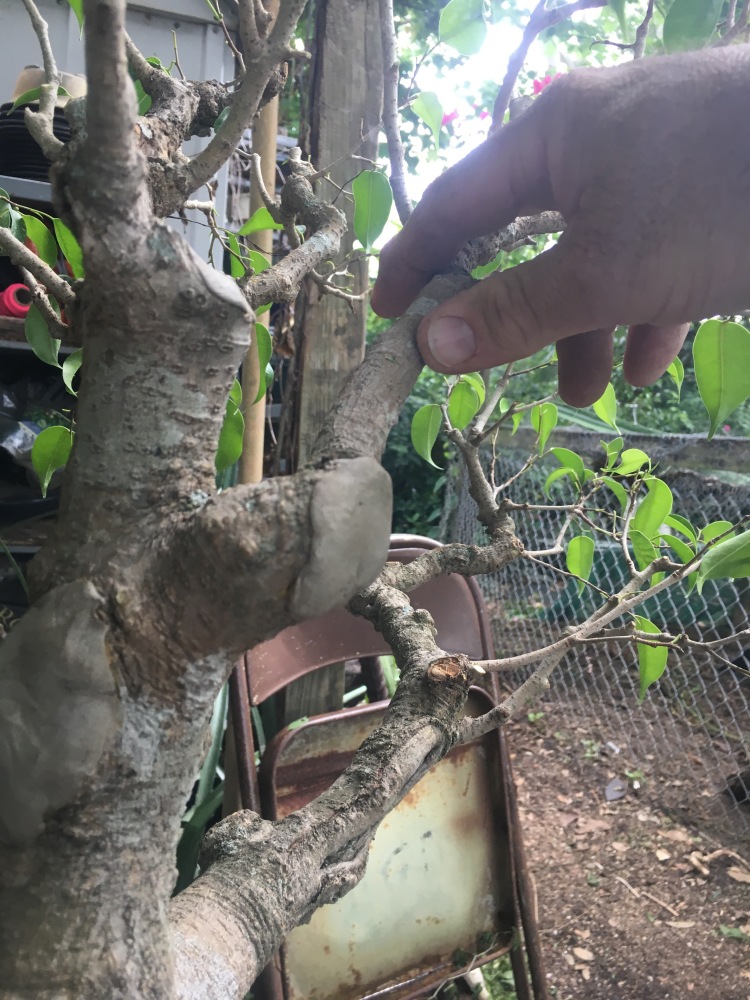 It needs to be more of a back branch. 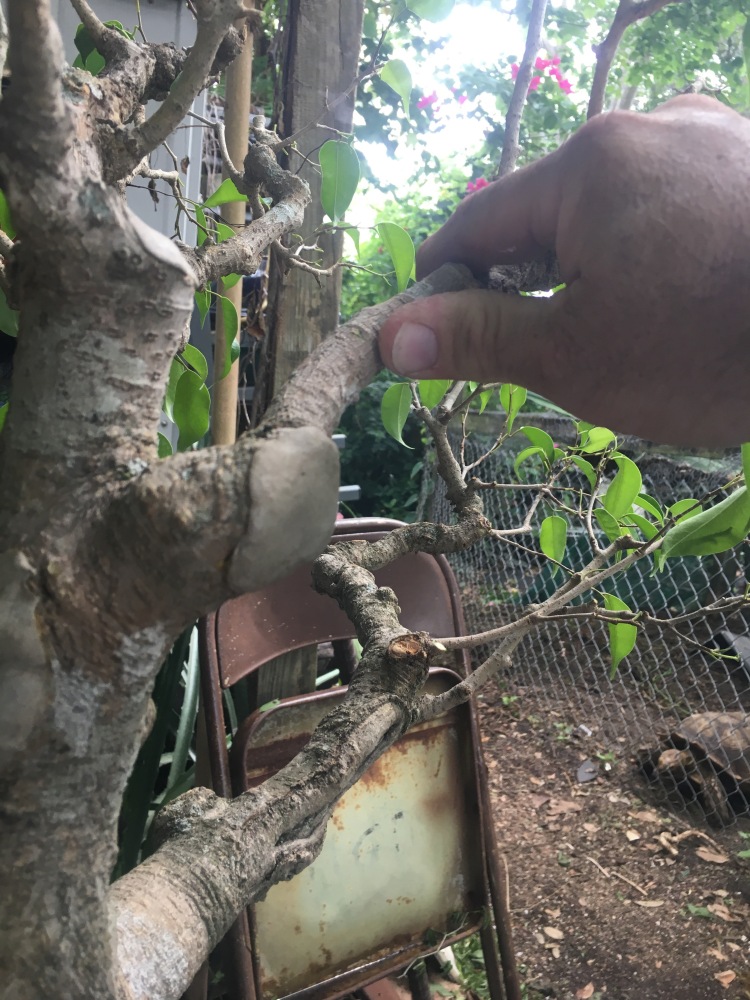 I’d say two of these will work. 6mm aluminium.

My wife was skeptical.

A couple more branches here or there…. 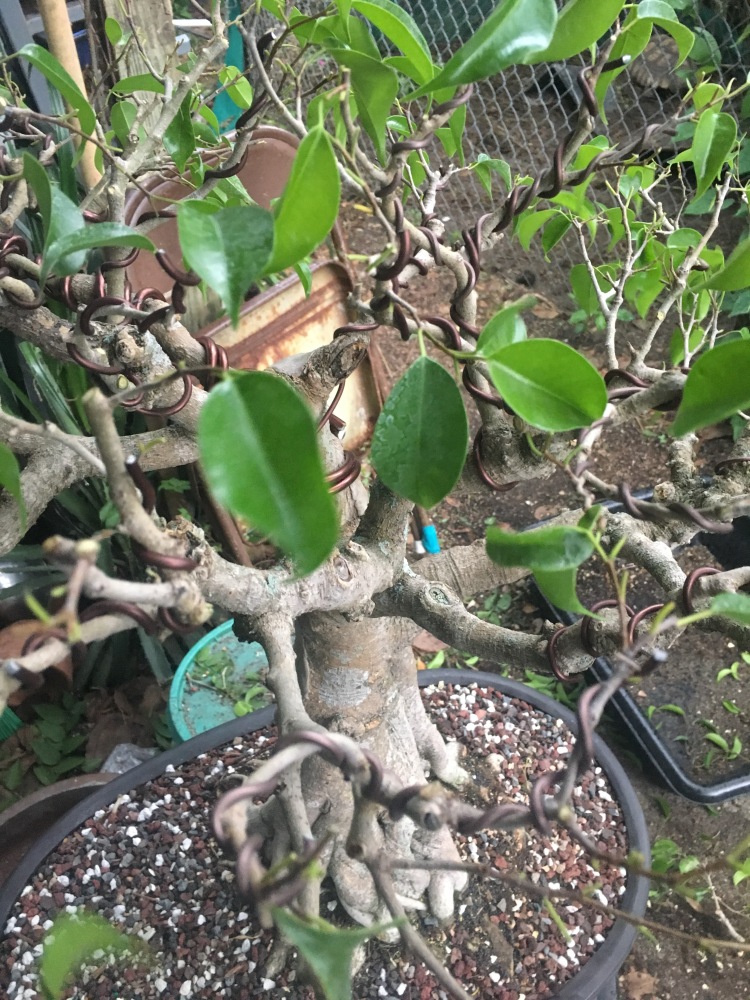 And we go from the scarecrow look…..

Yes, that was the front.

To a little more refined look.

Structure instead of a bush. 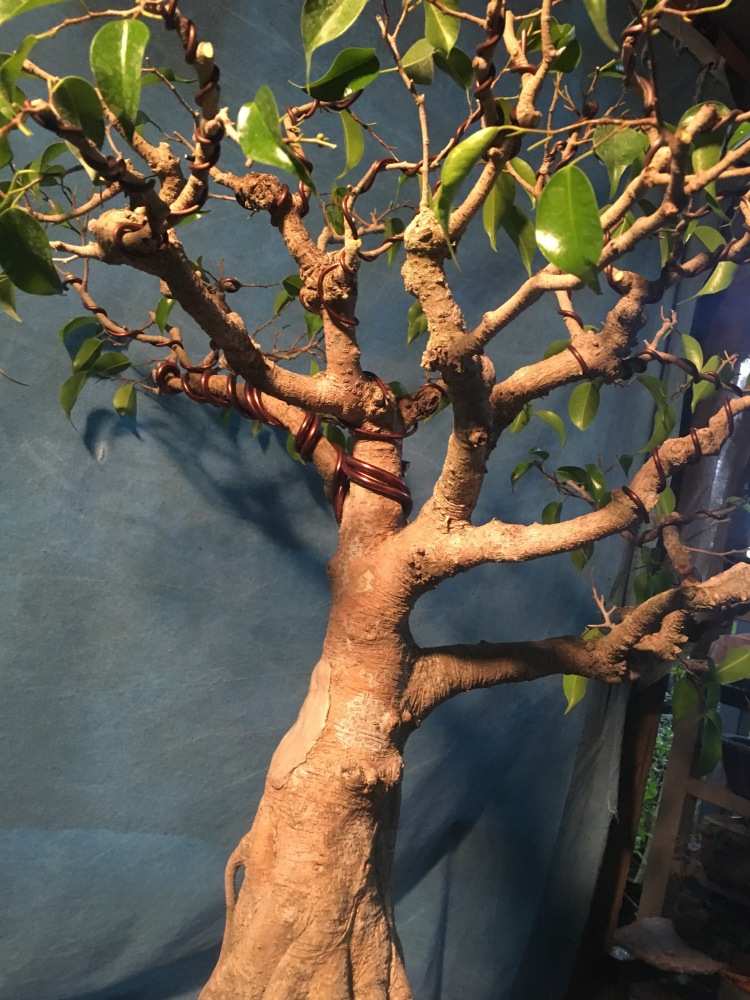 Look at the subtle trunk movement without that branch.

I’d like to see it in a more shallow, cream colored oval with a dark clay body.

I think I tamed the beast and, most importantly, Cosette, the owner, likes it now (sorry Cosette’s dad…). And, bonus, Cosette is a potter and is already thinking of a new pot for the tree. That is very gratifying.

And with that, I think, my work is done.