Propagation. Taking cuttings, growing from seed, air layering. That’s not what bonsai is. Bonsai is taking trees that have been grown by farmers, or nurseries, with the first, second, back branches  there already, and styling them so they are all purty and you can pose in front of them with a serious look on your face (almost that constipated look….really) and post it to Facebook (because Instagram is for losers you know). I mean….I mean….growing a tree isn’t bonsai, no siree. For the true bonsai artiste, the tree must be at a certain level of growth and refinement already, before those professionally trained hands can touch it. The tree must be, to use some cross industry jargon, fluffed.

Ah well, maybe I’m just an asshole but I disagree. If a bonsai person can’t work on any tree at any level, like Suthin, or Guy Guidry, or Ed Trout and several others can, then they are either maladjusted snobs or horticulturally deficient. Rant over. Let’s talk airlayering.

The tree above is a golden raintree (Koelreuteria elegans). Not a bonsai.  It’s an invasive tree in Florida and I’d like to get rid of it. But the problem is, I have an overly zealous friend who likes to cut trees down but doesn’t like to clean up after himself. And I told him to not machete the poor thing because I don’t want to clean it up either. I’m tired you know. So what does he do instead?

That’s right, he cuts a ring around the tree to kill it so I wouldn’t have all those branches and leaves to get rid of. Problem is, he did this about 2 months ago, the tree is still alive, and the cut, miraculously, is healing back.

I told him at the time that it wouldn’t work and he asked why. I reminded him of the airlayer we had just done. What’s happening here is, basically, the water and nutrients go up through the outer layers of the wood, as shown by the red arrow (coulda used blue I suppose, but that’s why the top hasn’t died yet).

The yellow arrow represents the sugar or energy going down through the cambium. Since the bark is cut, the downward moving stuff collects at that site. If we were to wrap it with sphagnum moss, like with an airlayer, that downward energy (and hormone) movement would cause the tree to grow roots. Kinda neat. In this trees case though, it’s just healing back. Like I said, neat. And this  is why I’m ranting and raving about propagation today. You see, my other friend, Cullen (I only have a few, I’m running out of them you see….) got a couple of Brazilian raintrees at the last Abs/Bsf convention and I’m pretty excited about them. Here’s one.

Not much to it. A big trunk, some sparse growth. Here it is with a broom for scale.

I didn’t have a banana. It’s too tall and lacking in any taper for a good bonsai. It needs a trunk chop. But I’d rather not waste that trunk girth (that’s what she said), so an airlayer it is. The question is, “Where?”

It has an interesting nebari.

The trunk, no matter where I end it, has little movement, except in the muscularity of it….

That’s the best place, usually, to airlayer: at that wide section. 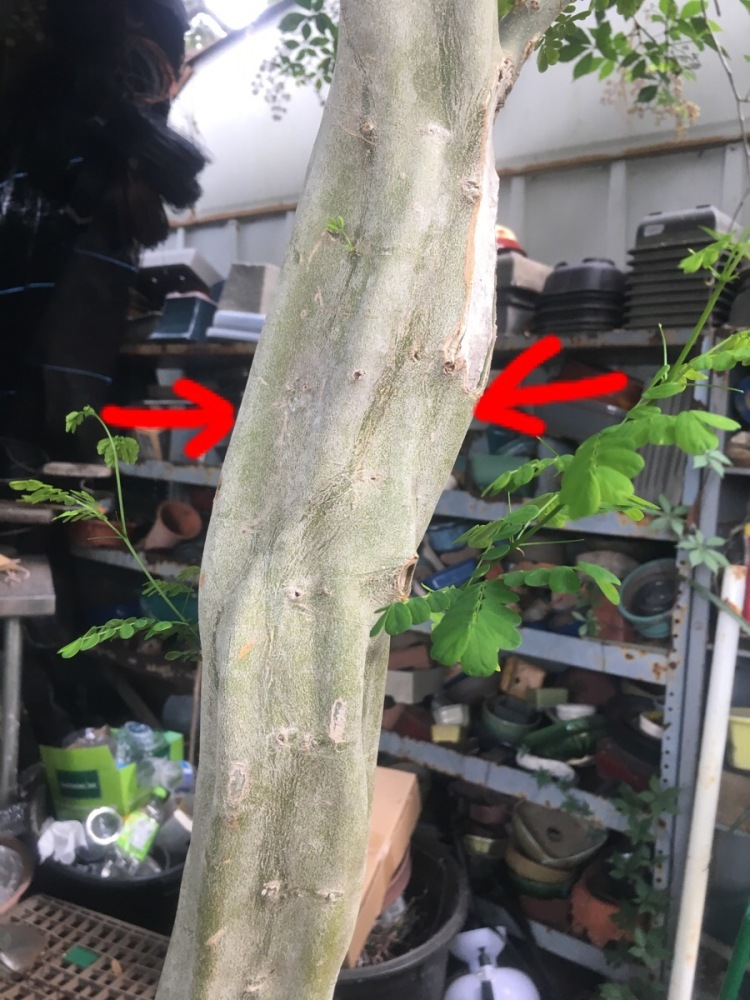 Let’s get to it then. First step: sharpen your knife! Next, be careful with existing wounds. This section is a good place for the airlayer but it’s too close to that cut.

So I’ll go below my thumb.

And the rule of thumb, make the ring about the thickness of the trunk or limb you are layering.

And lots of fertilizer.

Make sure you mix it in. 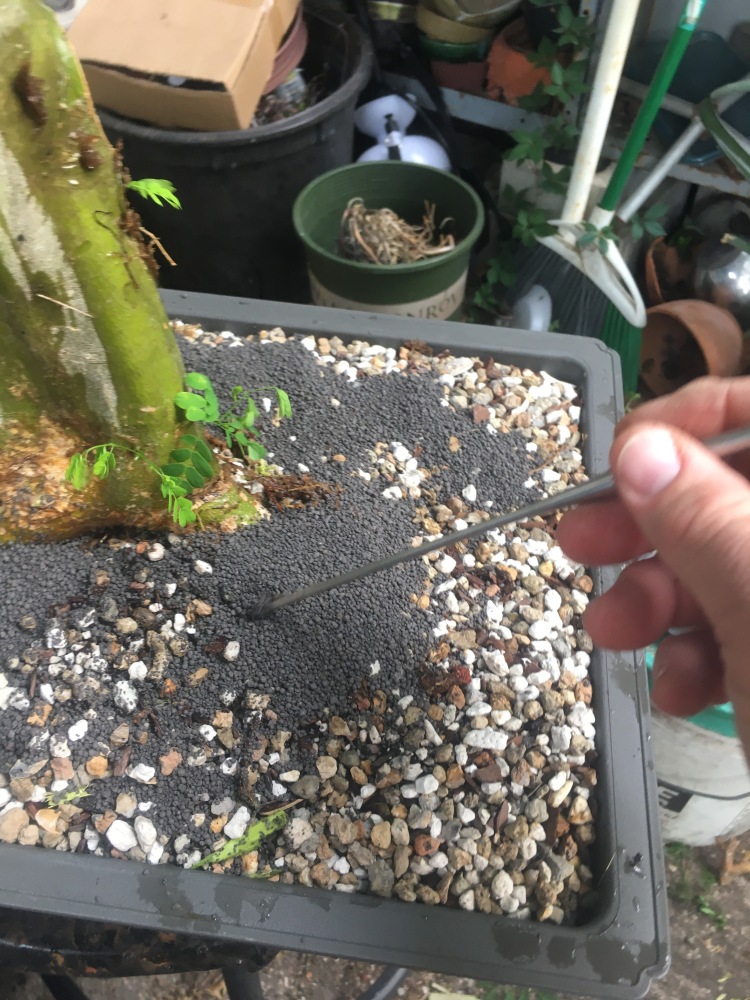 This soil mix is a little porous, or dry, as they say, and I don’t want the tree to wilt while I’m, as the professionals say, in process.

So the modus operandi is to cover the soil surface with the leftover sphagnum.

The other raintree is smaller and has another situation.

Because of the lack of taper it is literally two trees. Or two potential trees I guess. 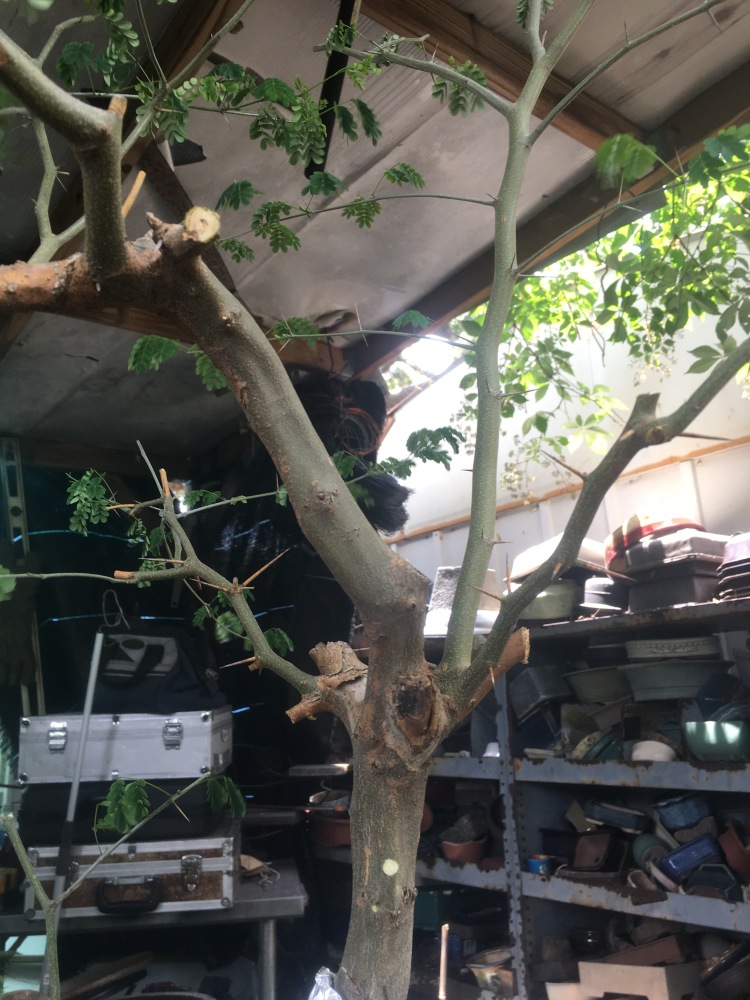 This one I’m going to try something new, I don’t know if it will work or where the idea came from first, but I’ll try it. 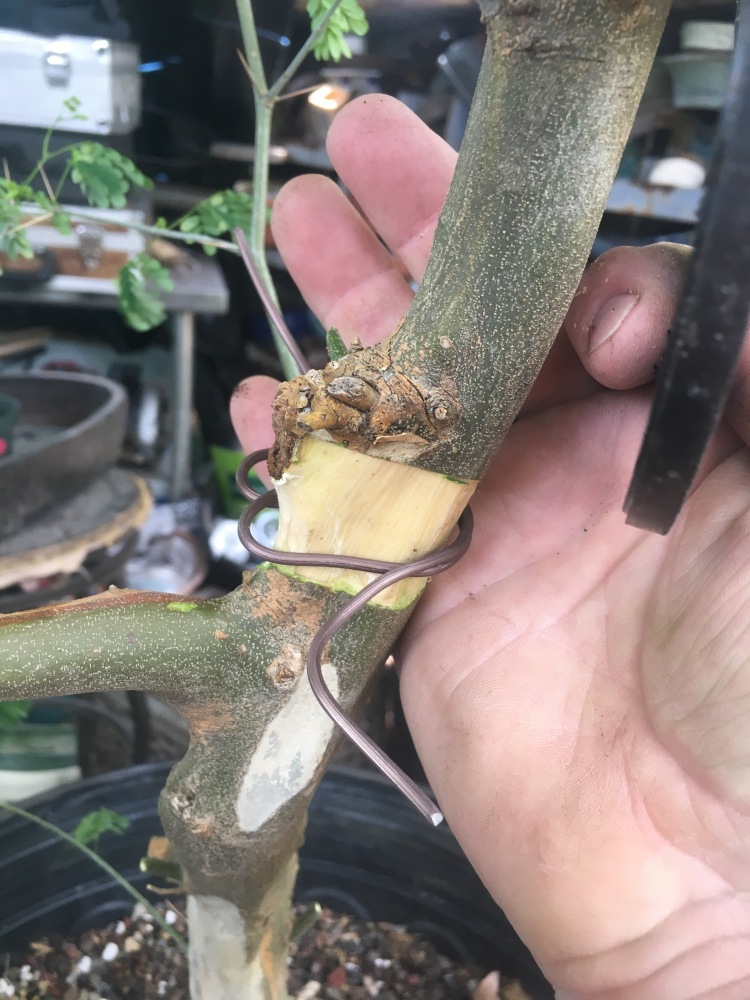 The wire is a platform for this plastic cup lid. 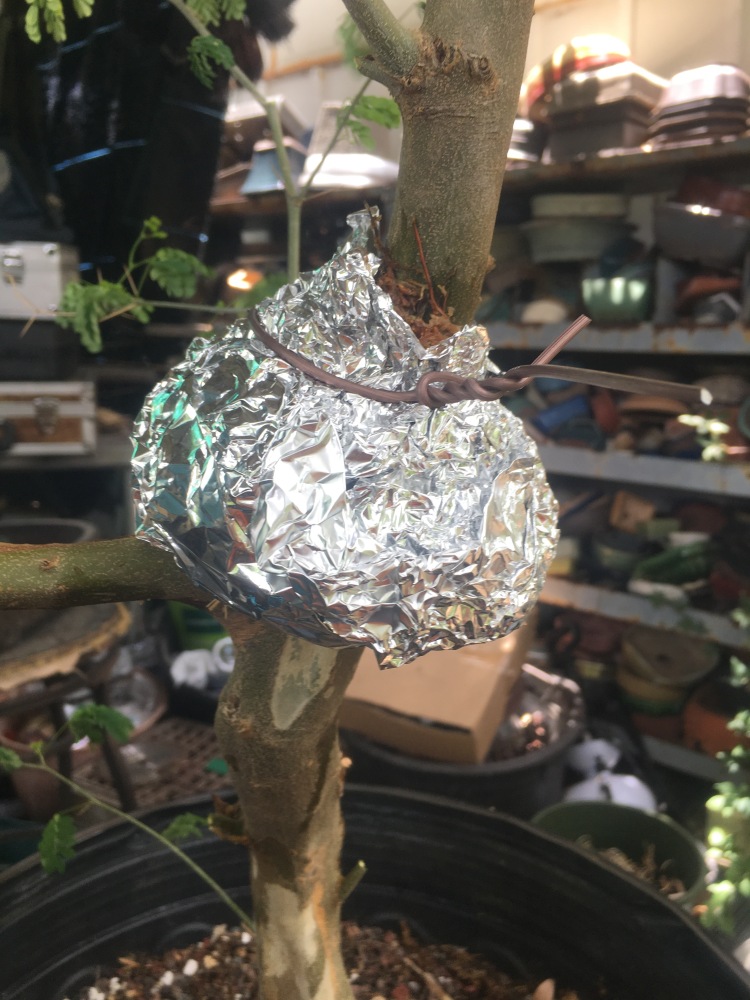 The idea is for the roots to spread out horizontally instead of ball shaped like a regular airlayer.

Usually you have to spread the roots out after the top is cut off the bottom, which means that you could damage the new, tender roots. I’ll let you know how this works. If it does I’ll take credit, if not I’ll assign blame.  Maybe I’ll go further with roots and plant it on a wooden board, spreading out and stapling each root until I have the perfect nebari. Maybe. If I do, it’ll be just to show that it can be done and that I did it. I don’t really care for perfect nebari. I like interesting root spreads.

The next tree-BONUS!- since I’m on a roll, is a hackberry I picked up at Dragontree Bonsai Nursery, at the beginning of the year.

From the floor of The Nook it hits the ceiling.

That’s maybe 8 feet tall. Good candidate for an airlayer. The question here is, again, where? I got the tree because of this Shari.

So I don’t want to damage it at all. Above that we have some taper and movement. 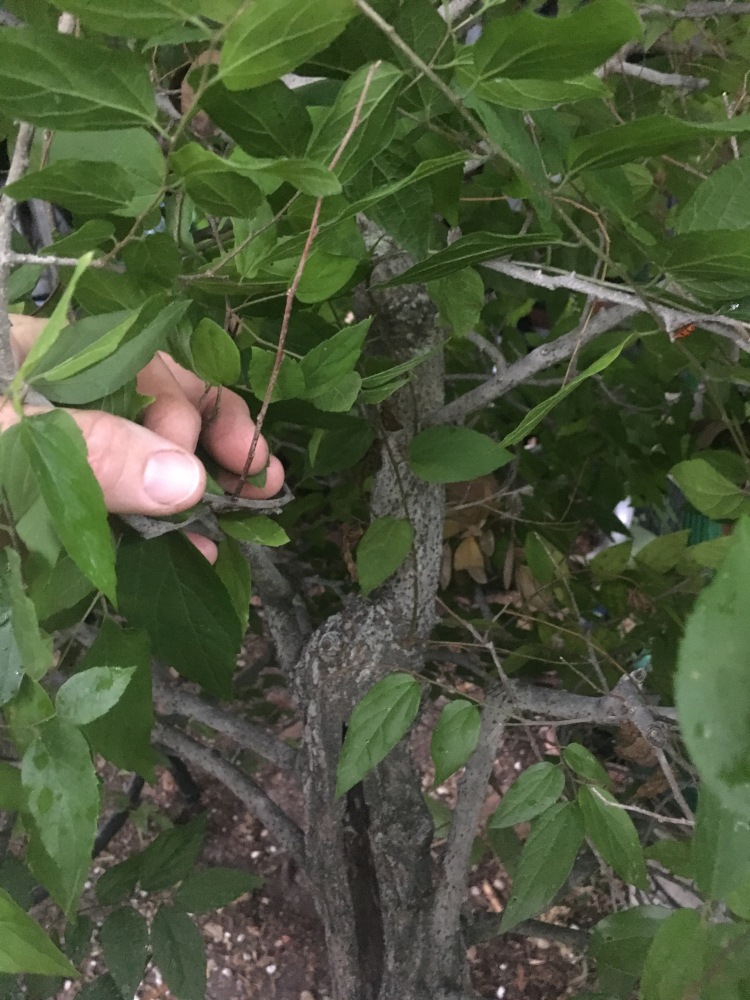 I’m gonna tell you, I’ve been looking at this tree for many months.

It’s been tough to figure out where the story ends.

Looking at the canopy….. 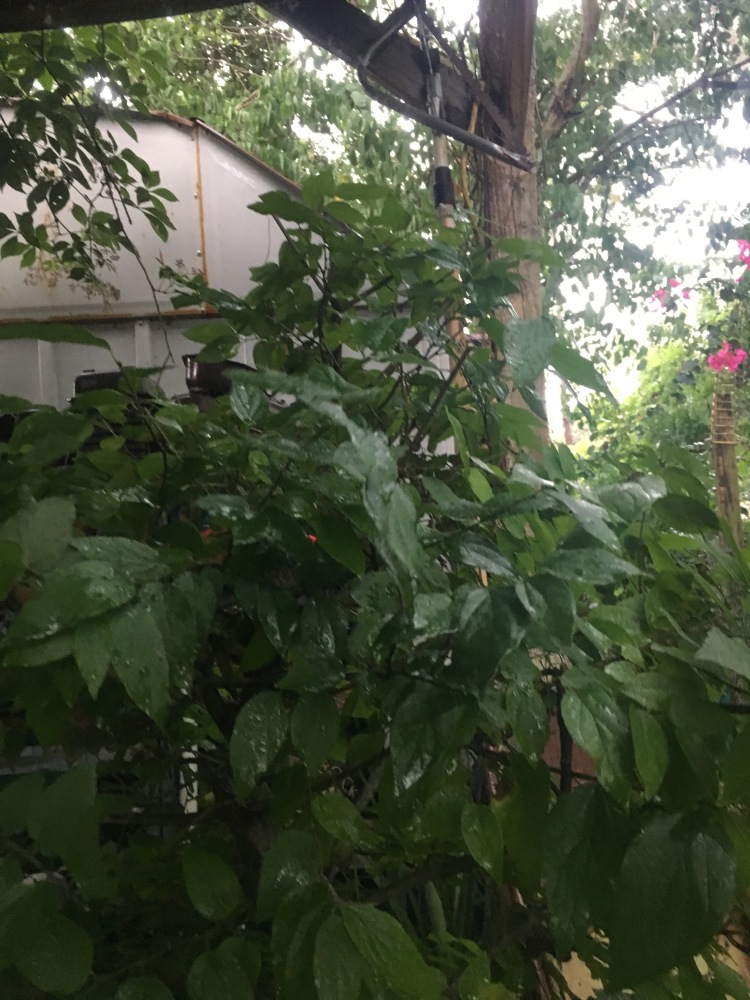 ….I think I figured it out. Let’s do some pruning first, to get a look at what I’m doing.

There we go. About 4 feet tall now.

The height and the gradual taper are suggesting a classical trunk to height ratio, to my eye. So the air layer will be way up top. 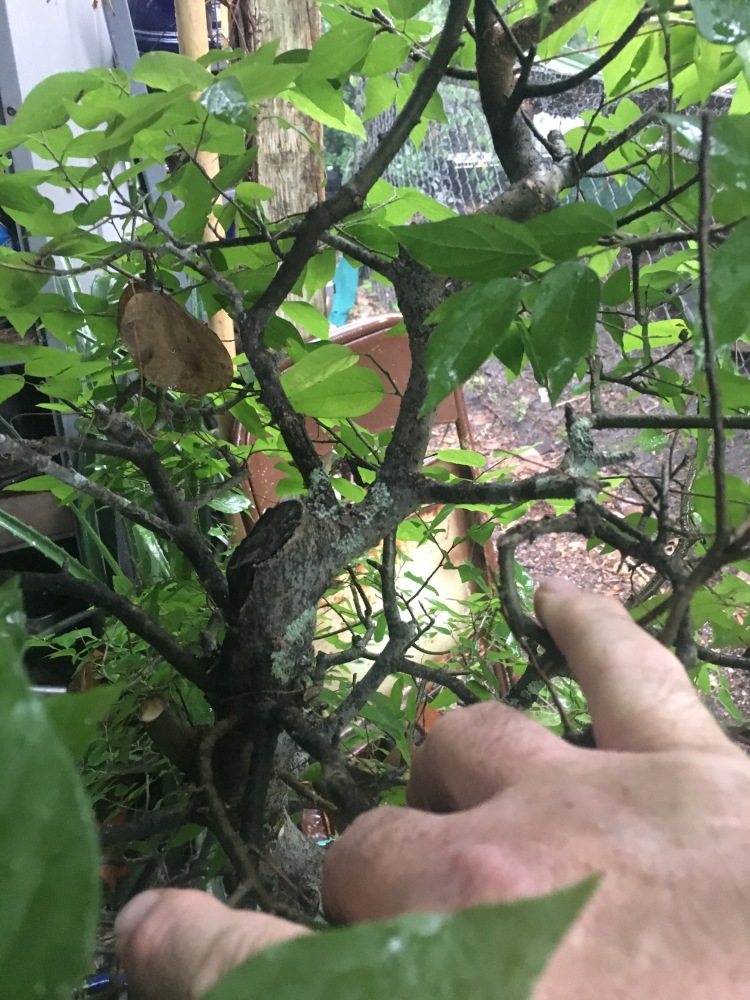 This’ll be interesting. That wound is right where I need to do the layer. 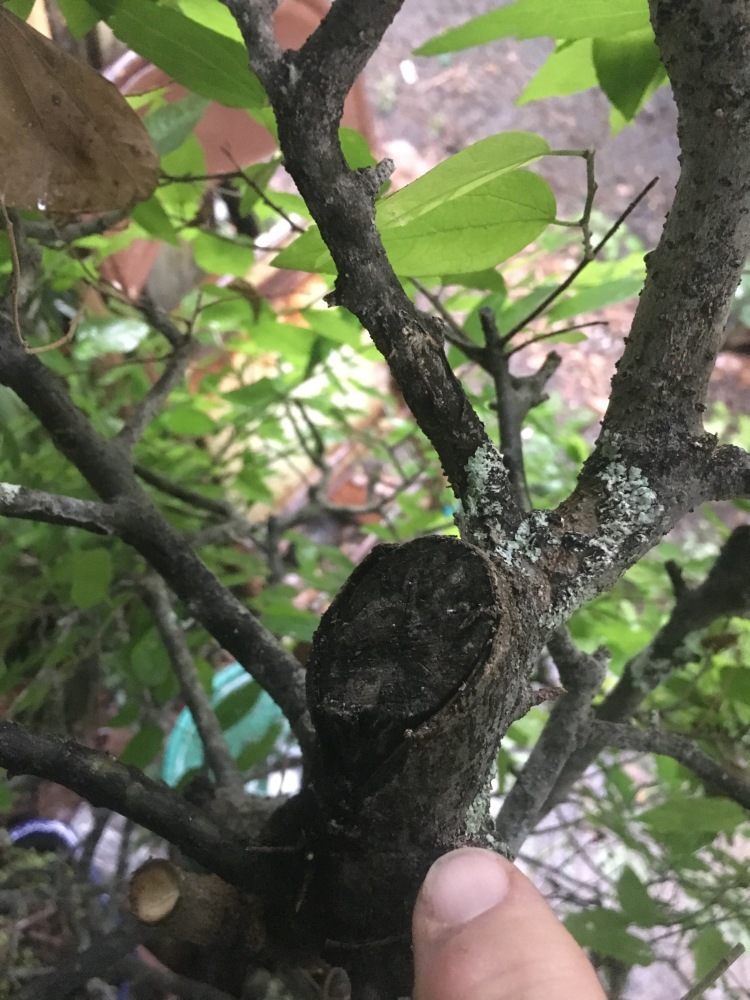 It’ll either make an interesting root spread, if the layer works, or I’ll kill the top. Either way, that top needs to go. So let’s try to save it.

​Kinda hard to get the knife in there. 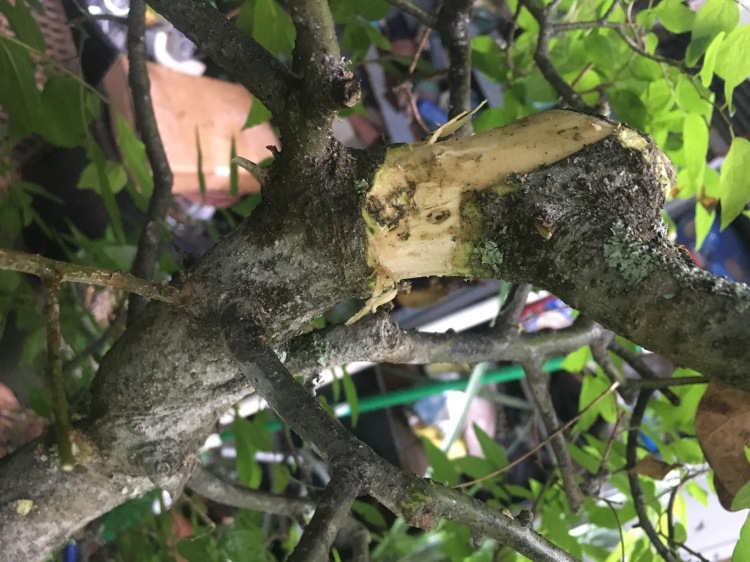 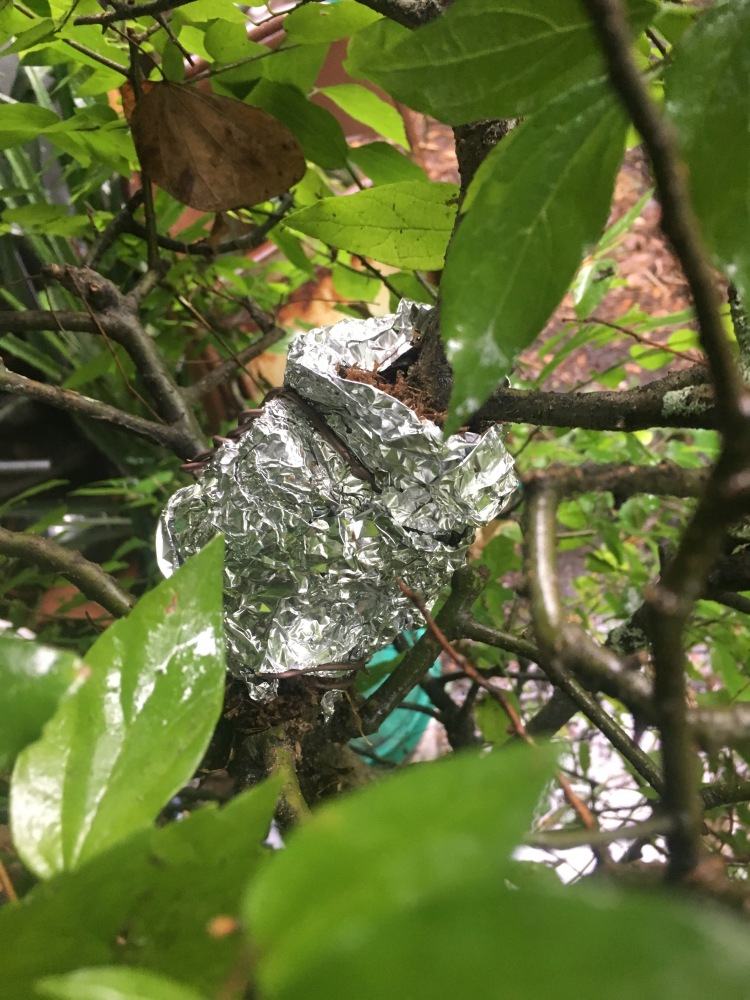 For the curious, I use foil because it molds itself to the moss, and it keeps the layer site a little cooler in the Florida sun.

Now, I feel confident to prune and do a rudimentary styling on the tree. Because of my studies with the scientific literature concerning plant hormones and the role they play in plant growth (or death) I know, or am fairly certain, as to what happens when I am cutting and pruning a plant. Think of hormones like a computer program. They tell the tree what to do, regardless if it might kill the tree carrying out those instructions (which is why I said death earlier). You can read about hormones and bonsai in the epic blogpost, I use some fancy words to justify my defoliation habit, go figure. It’s a page turner.

Pruning for shape and structure.

I’ll need some wire too.

This needs to be here, for example. 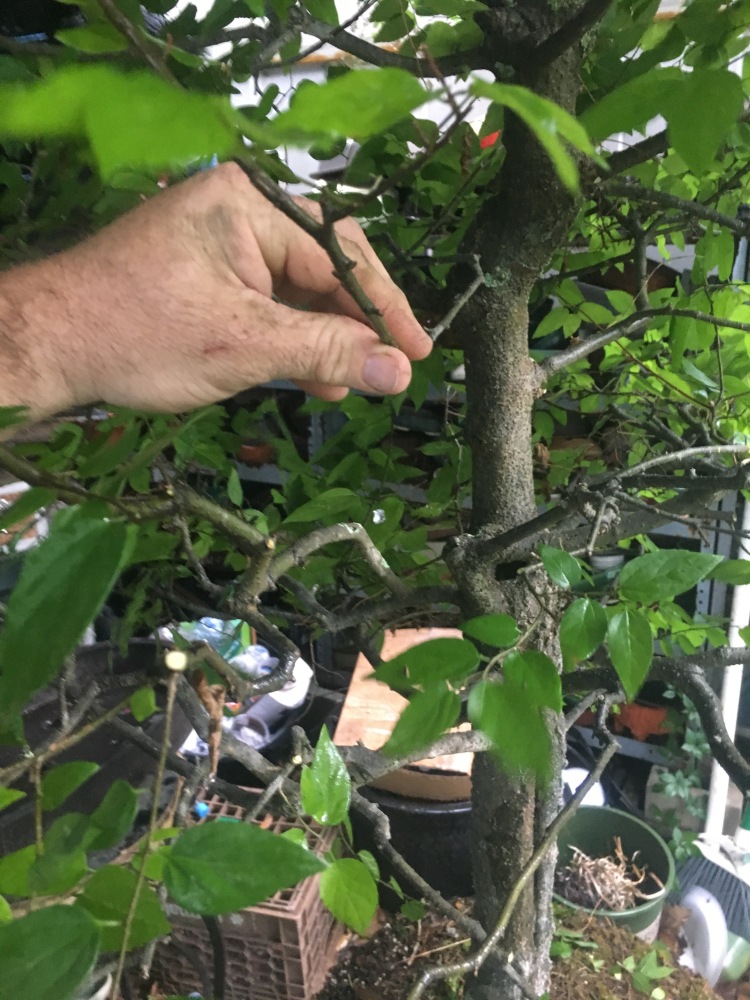 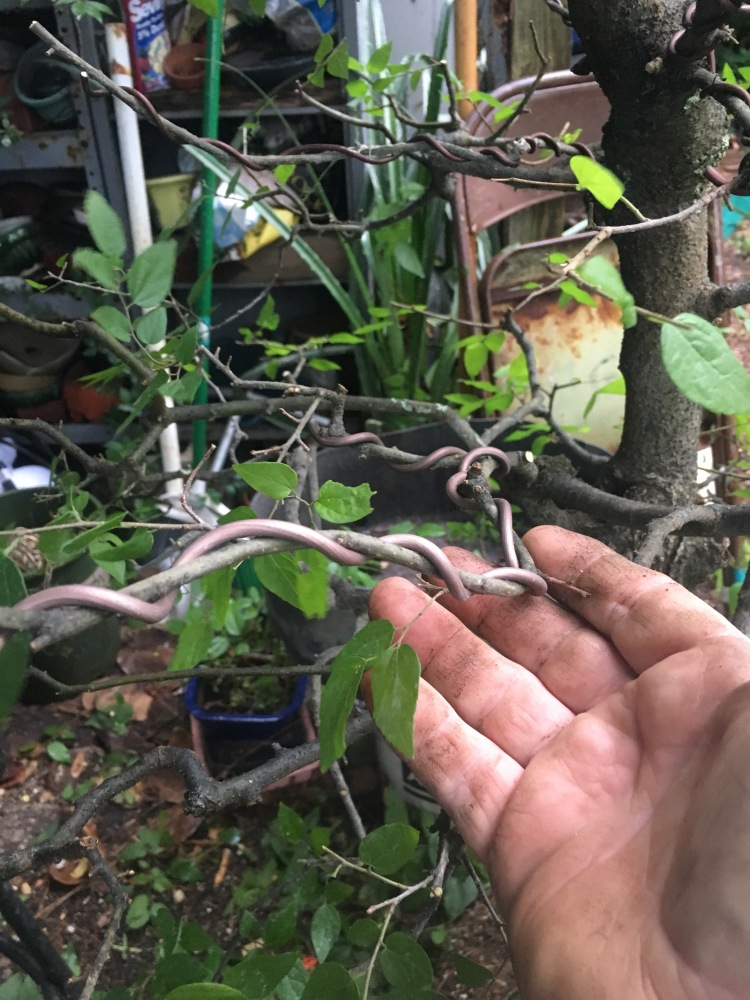 Getting some good movement.

I’ll do a few blogposts on this tree I’m sure.

Again, heavy ferts, some new soil on the bottom of the pot and as a top dressing.

And it’s still too tall to put in my normal tree pic taking spot.

You get the gist.

To review. A fat airlayer.

And a tree that every stylish bonsai person will say it’s too tall, that kinda looks like the eye of Sauron.

Keep it secret. Keep it safe.