“The highest reward for a person’s toil is not what they get for it, but what they become by it. ”  ~ John Ruskin

Ok, for those of you who googled good ol’ John, he did have some odd ideas. But this one quote is pretty spot on. Just like me, and a broken clock, he can be right at least twice a day. Or, as one of my favorite sayings states, even a blind man can tell you that the sky is blue. So, though the quote above can be seen through the veil of an overlord cheering on the mindless toil of his slaves, it can also be seen through the eyes of a lone, struggling artist trying to find one’s place, and one’s life, in meaningful and artistic labor.

Here’s a Brazilian raintree. I got it from Gail, less than a year ago (I wrote about it in This blogpost)

This was how you saw it last, below. From the above pic, you see I’ve repotted it, defoliated and removed the wire. 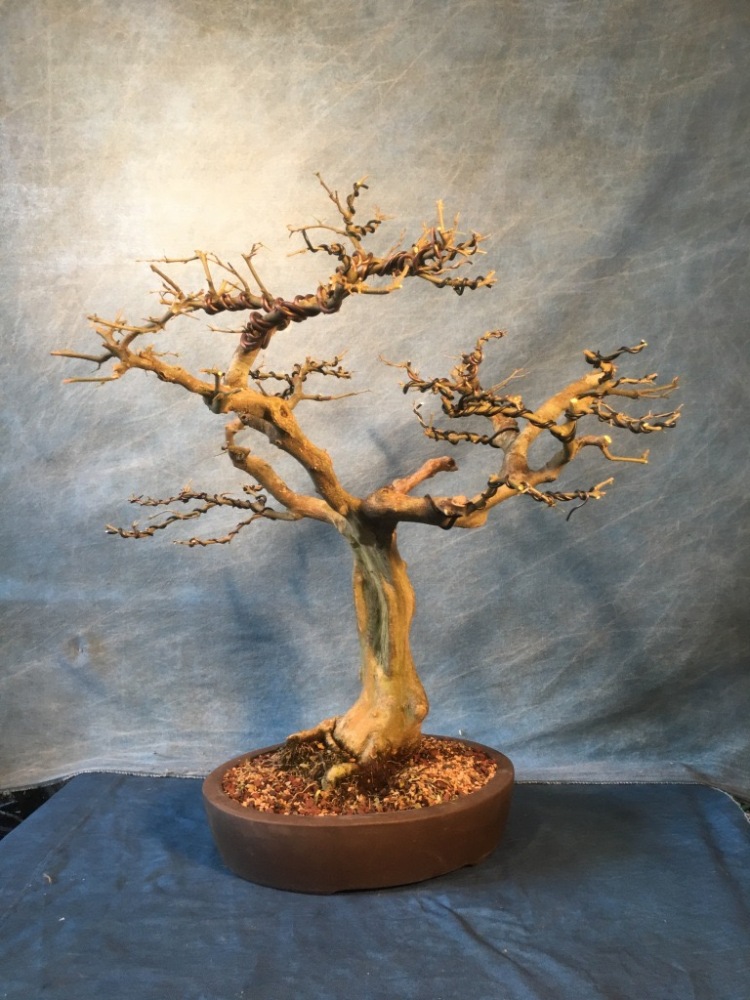 I’m also going to work on this orange jasmine (or lake view jasmine or whatever they’re calling it, it’s a murraya paniculata, first seen Here September 2014) 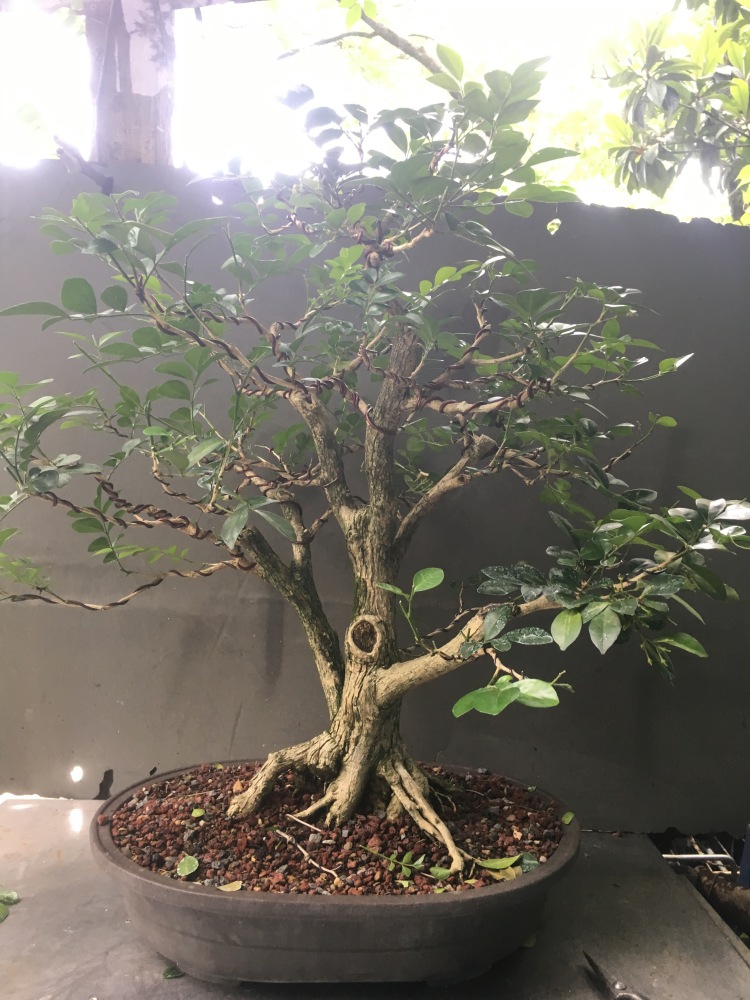 It’s been grown out, cut back, wired, unwired and rewired since then. 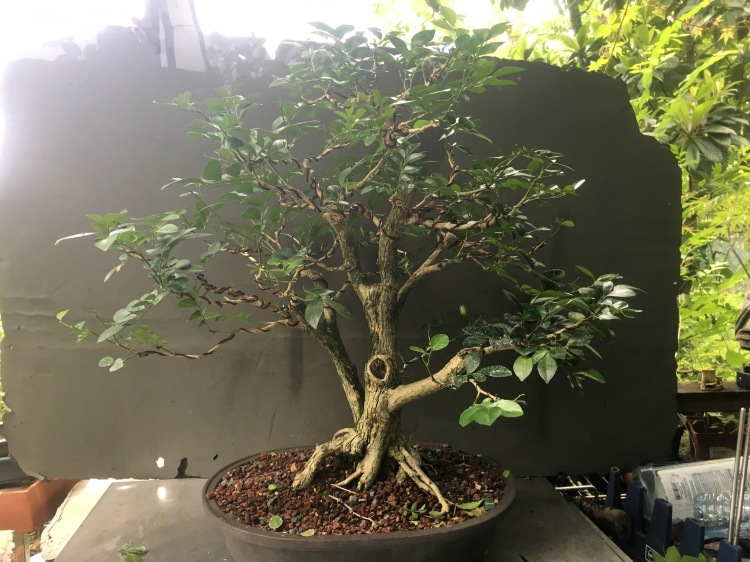 At the end of the 2014 post I promised to get it ready for the 2016 National Show. Longtime readers will know that I got sick soon after the original 2014 post and many projects fell by the wayside. But I’m better know and I’m finally getting back into my old projects.

I love this hole. In Japan they call it “uro”. To me, they bring back memories of my childhood and how I would draw a tree. I’d always put a hole in it for squirrels or raccoons to hide in or make homes. Ah, To my youth (My sweet roisn dubh)

Let’s get to work. Here’s a Hidden Mickey for you disneyphiled out there.  I am in Orlando, after all.

Starting with the Brazilian raintree, my main goal with wiring a tree like this is to match the character of the branches to that of the trunk. 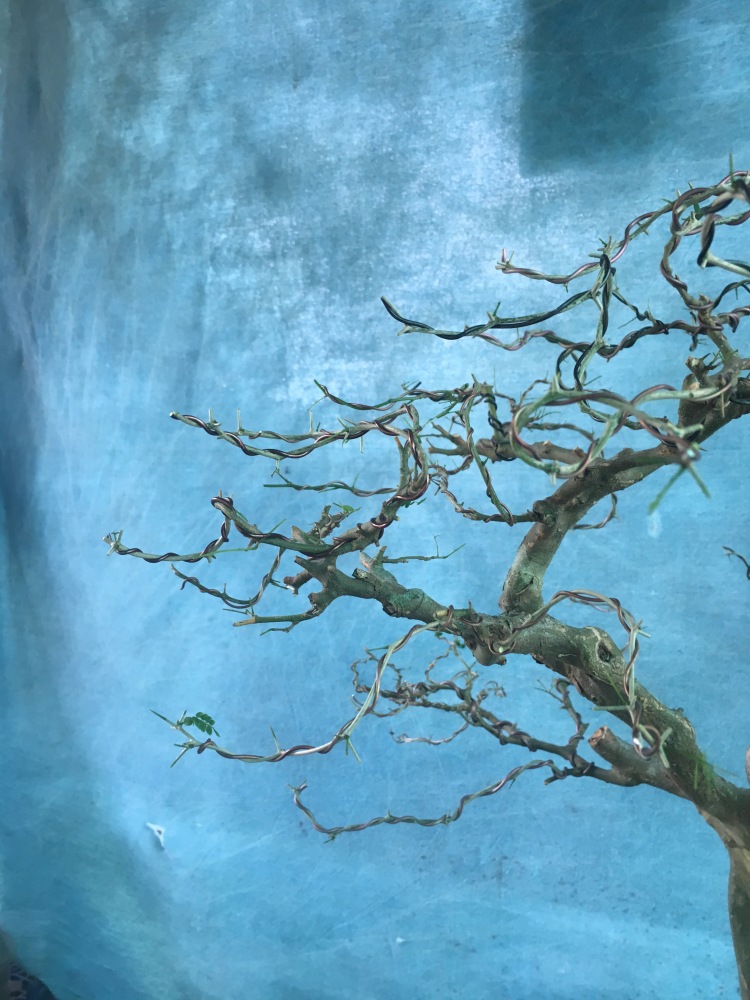 Do you see the stump?  I lost a big branch there from dieback.  Brazilian raintrees have a pretty drastic response when it comes to die back. So when you prune it, it’s best to leave a stump to allow for the inevitable. Otherwise it’ll dieback into the branch or even the trunk. Which is how I lost the branch.

Now, the orange jasmine needs defoliation and unwiring. The wire is just starting to cut in. 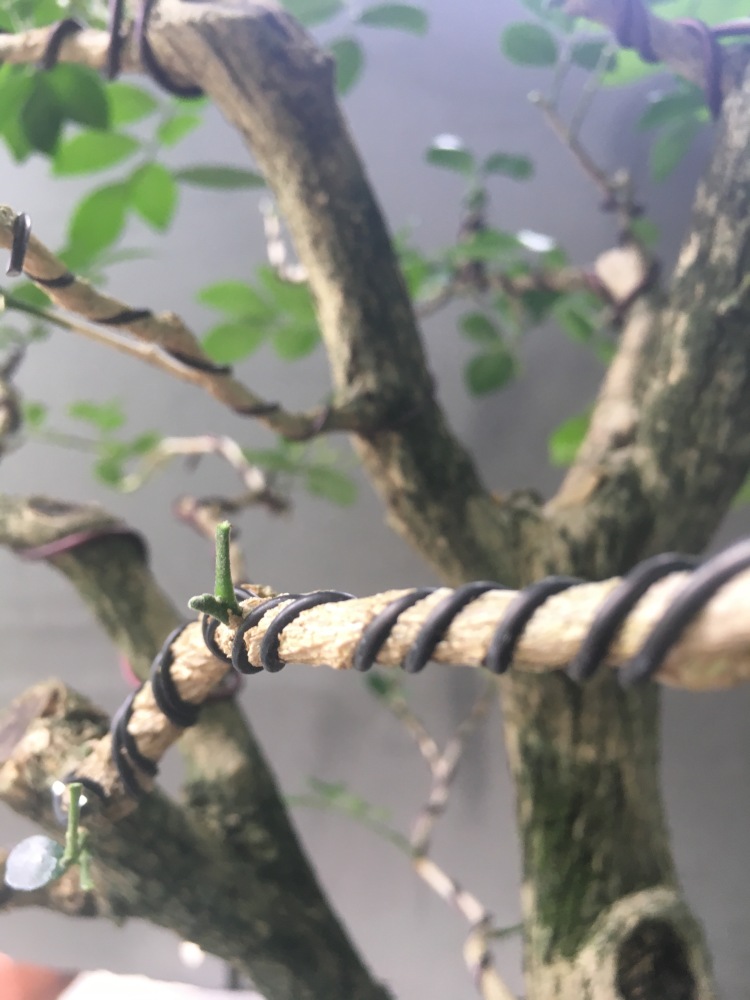 To defoliate a murraya, first you have to realize that they, like the Brazilian raintrees, also have compound leaves. The whole structure in my hand is one leaf.

The things that look like leaves are called, appropriately, leaflets.

Here’s a tidbit for you. See this structure?

That’s where a flower occurred. Many trees will flower on the end of branches, effectively stopping any elongation of that branch. If you allow a tree to flower you need to find the new growth tip to cut back to (try to do it before the fruit develops, you can see that I’m late on this, I have an excuse, I was in Louisiana on tour when this flowered)

What’s better is to not let it flower, if you are trying to develop branches. The tree uses a lot of energy producing flowers and fruit. It’s better to direct that energy to branch development.

Let it flower for a show. There are some azaleas that have been denied flowering for up to ten years and then, boom, nothing but blooms for the show.

There we go. You can see the structure now. 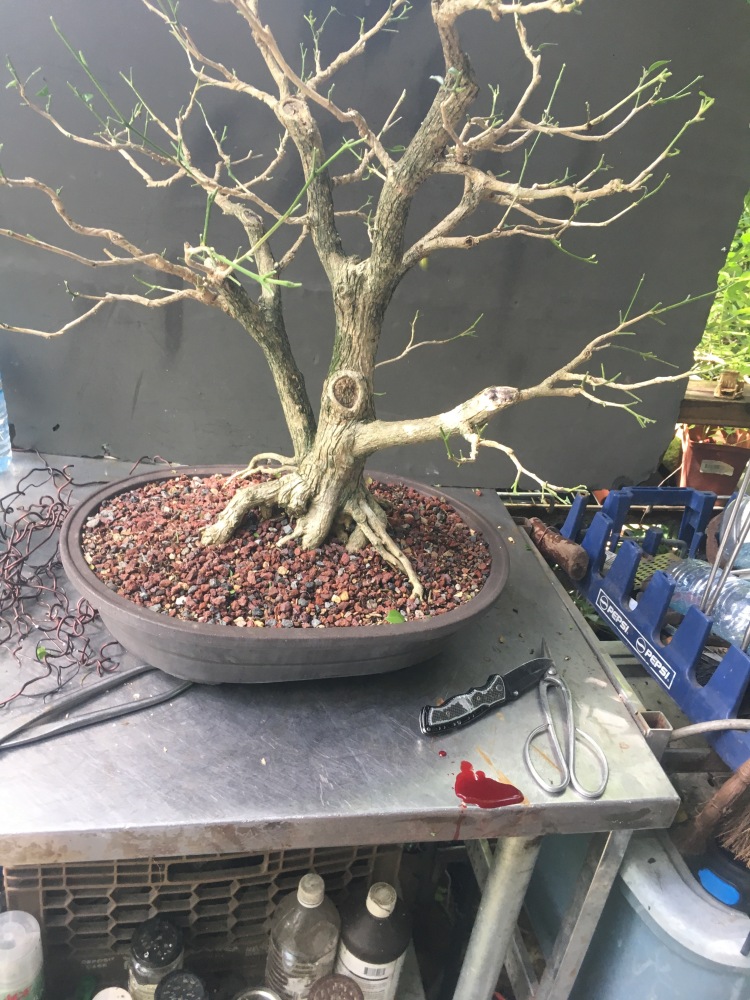 You can also see the blood. Damn, that hurt. 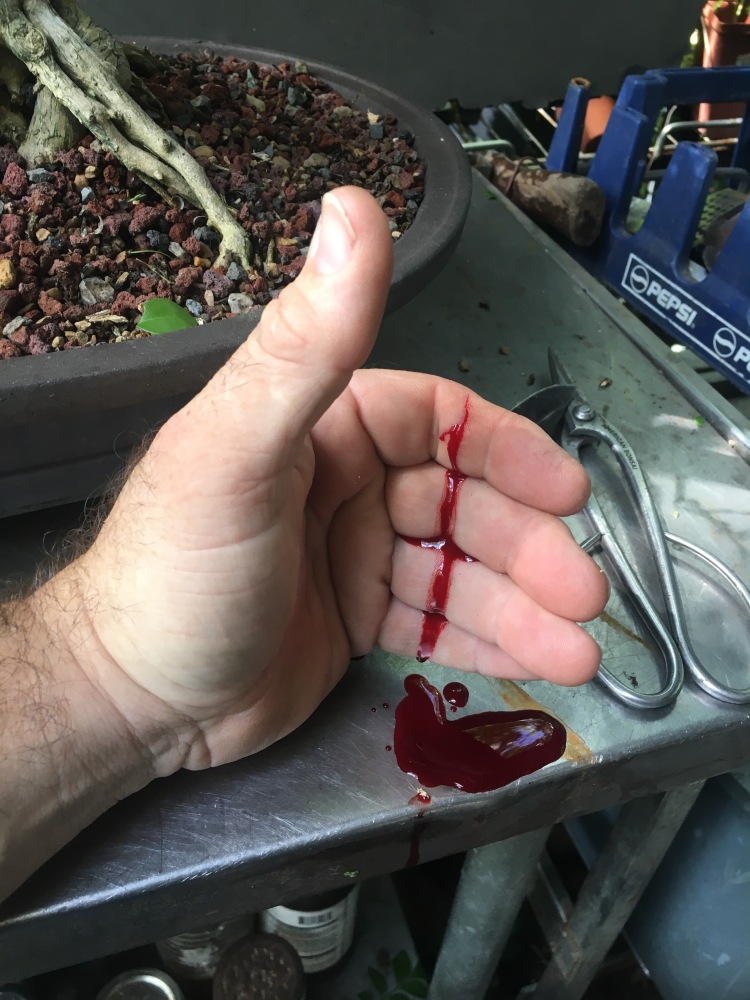 It bled a lot too.

Someone on Facebook  said that bonsai is all about “blood sweat and beers”.

And it is, often. But, to paraphrase the old saying, “pain is temporary, wiring marks fade, bonsai keep growing, and chicks dig scars”

Use the gel type, it doesn’t run down your hand. Back to the trees.

What did I mean when I said that the branches should match the tree? Look at the structures of both bonsai. 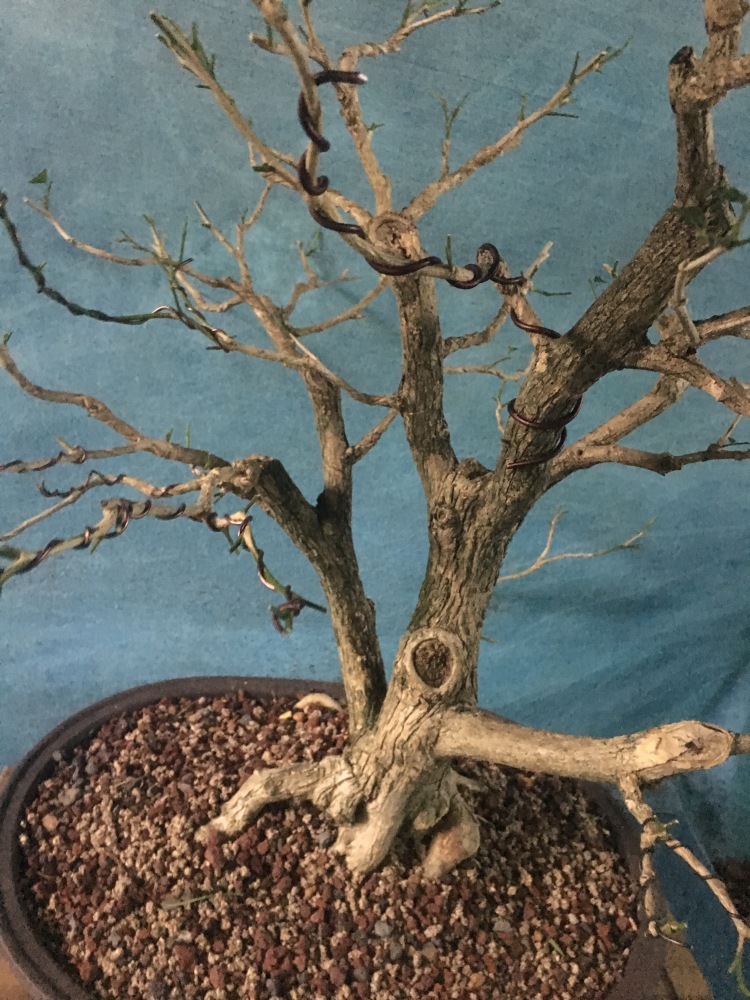 The Brazilians trunk is twisted, muscular, it breaks many rules. I could cut it back and try to make a more traditional style. Follow the rules, so to say.

I don’t think I need to. It looks like a tree. It works, even with those unconventional “bones”. The branches match the tree, twisty and curving back on themselves.

The jasmine, a more traditional looking upright deciduous looking tree, still has some “flaws” as they say.

There are some straight lines, the taper is more natural than what the modern interpretation calls for. But again, it looks like a tree. And the branching flows more like the trunk. Up and out.

It was originally styled by one of the only living bonsai masters in the USA, Suthin Sukosolvisit. He was touring Florida (back when he did that still) and I took the tree to his BYOT workshop. It was in a 15 gallon container and was probably about 4 feet tall. I only knew Suthin (at that time) for his work on shohin trees, so I was expecting a heavy chop. Nope. He listened to the tree, let it show him the way. As he made the cuts, he explained the concept of taper, branching. He showed me a better way to look at trees. It’s not about imposing our will (or insisting on the absurd idea that a tree must be designed into a specific “style”, like windswept or semi cascade or whatever). I learned (both on that day, but also from constant questioning myself why I was doing what I was doing) that the tree knows what it wants to be, either by the way it is growing, or by the overall growth habit. That’s a hard lesson to swallow as an artist, of a person that should be able to take a blank canvas and throw pigment on it to express an idea (I hardly ever did that as a painter, I was a found object artist. I used to walk he streets and fields, wander the back alleys and forest trails, and pick up trash, magazines, old broken toys or smashed window panes, and make my art out of these things. Perhaps this is why bonsai as an art attracts me. Truly, with bonsai, you begin with a thing that already Is. You then help it become more of what it Is). But Bonsai is not a blank canvas type of art. It’s like trying to play a blues song. Or a flamenco song. There is a framework and a progression that follows. But the organic component controls the chord changes, the time signature; you can’t make a cascade bald cypress or a formal upright wisteria. You can try but it’s like singing a punk song about going to the Starbucks to get your venti skinny vanilla latte with extra foam and soy milk.

What else? How about I take another quote out of context to help prove my thesis: “Avoid Gurus. Follow plants.” Terrance McKenna. He’s another man with interesting ideas, about the nature of time, consciousness, reality and evolution. He also took a lot of drugs (hence the “plants” thing). But, like I said, taken out of context, his quote fits this narrative. Like I said, I find things and make them into my own story.

What am I becoming? Whom do I follow? What have I learned from all the teachers I’ve studied with? Well…..that’s a tough one. I’ve learned a craft that helps me to feed my family. But I’ve also learned a few other things.

I started this post off with a quote, perhaps I’ll end it with another one, this time from one of my favorite books, Siddhartha, by Herman Hesse “When someone is seeking,” said Siddartha, “It happens quite easily that he only sees the thing that he is seeking; that he is unable to find anything, unable to absorb anything, because he is only thinking of the thing he is seeking, because he has a goal, because he is obsessed with his goal. Seeking means: to have a goal; but finding means: to be free, to be receptive, to have no goal. You, O worthy one, are perhaps indeed a seeker, for in striving towards your goal, you do not see many things that are under your nose.”