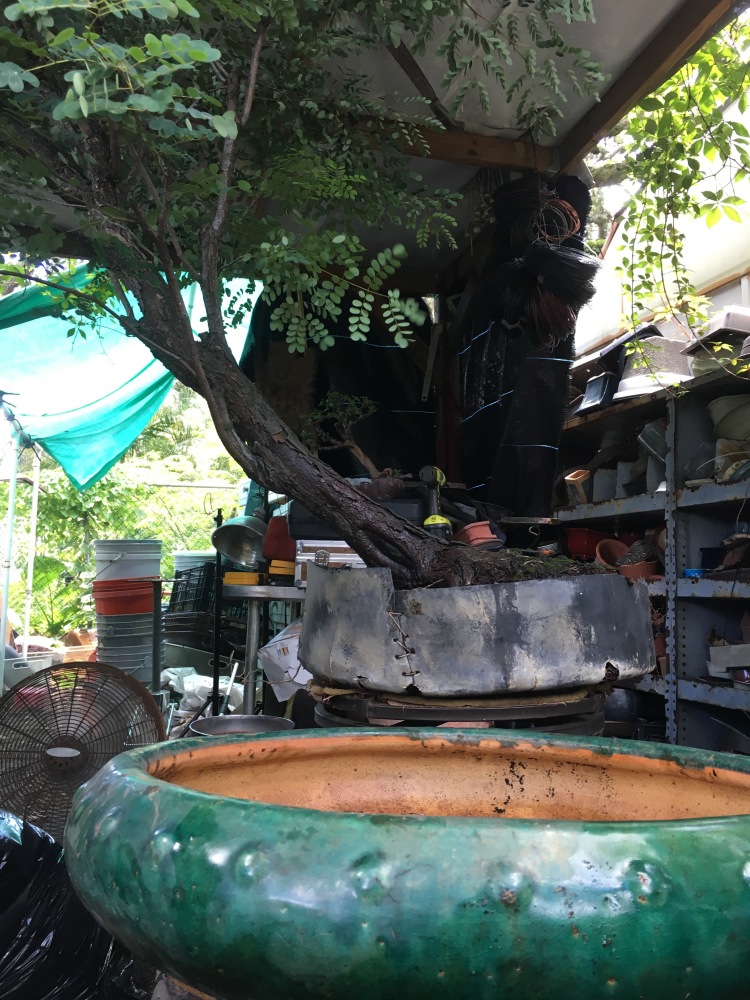 We (that would be David and I, not the royal “we”) are going to put it into that green pot. It looks small but…

We also have a big Brazilian rain tree to get styled and potted up. 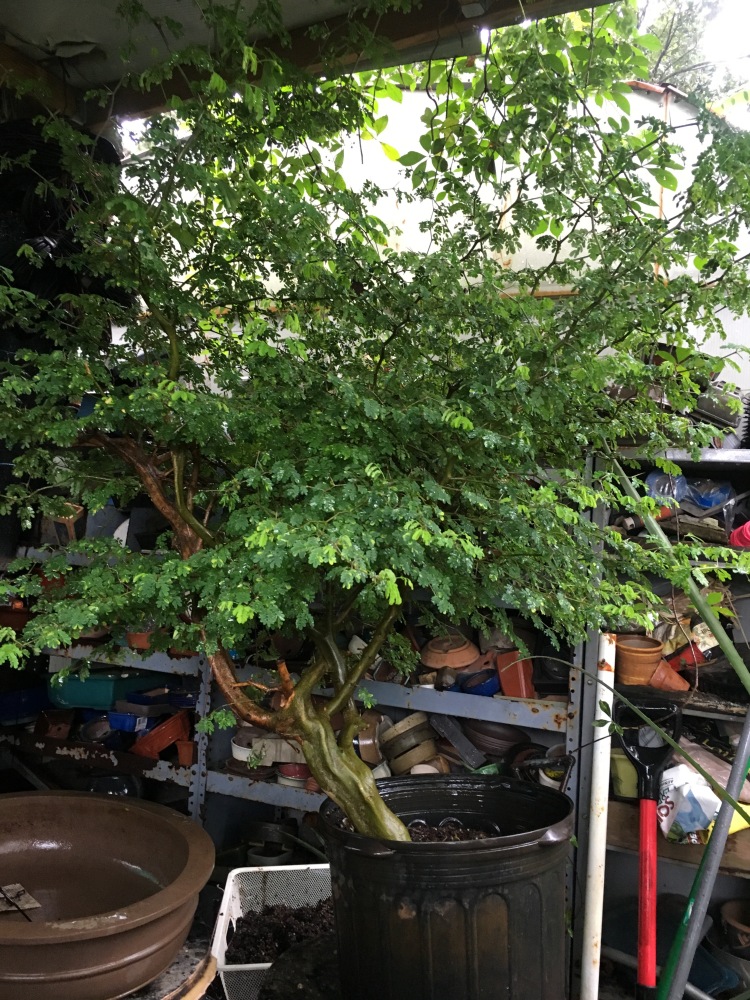 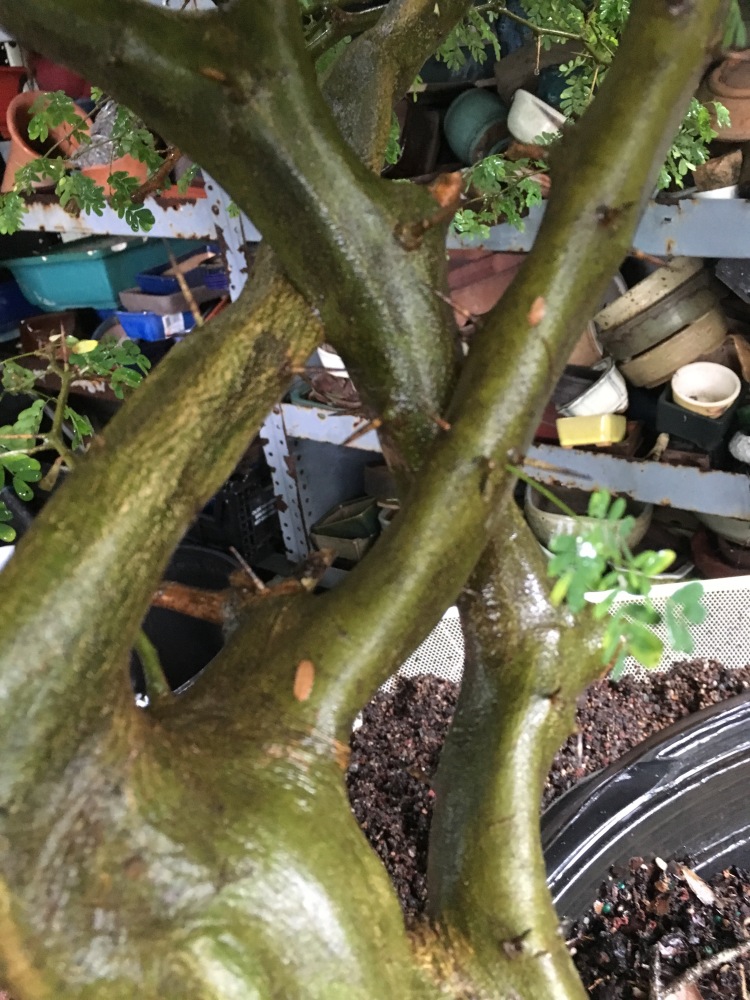 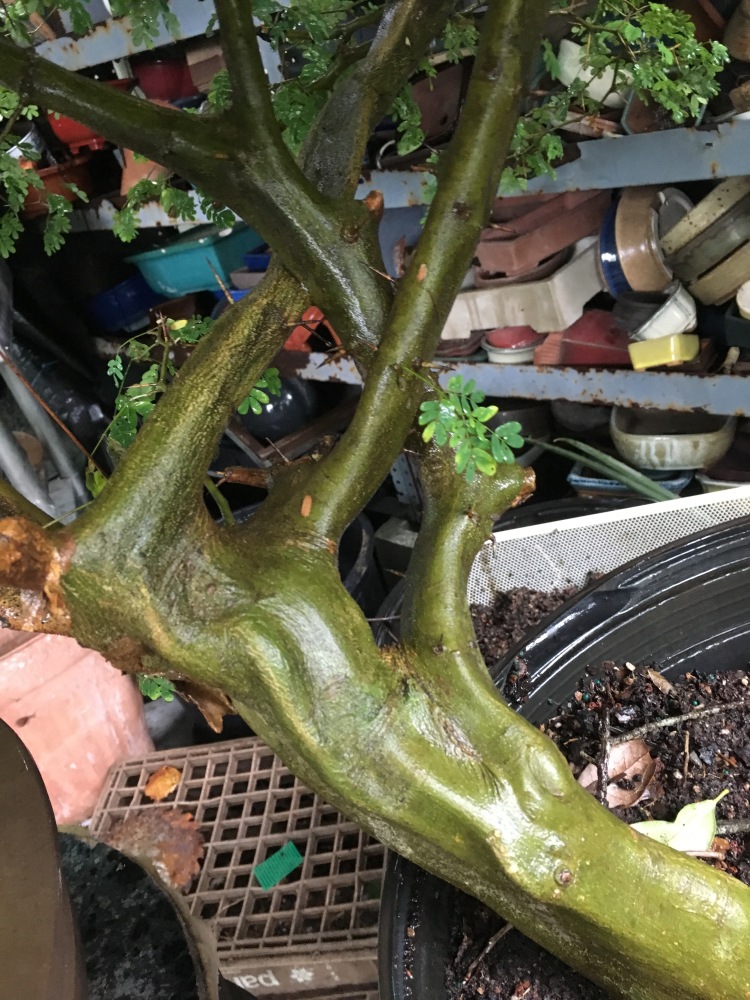 Let’s see how much I can mess it up. As always, I start at the bottom.

What do we have under the soil?

Very often, on a BRT, the roots will be a bit wonky. 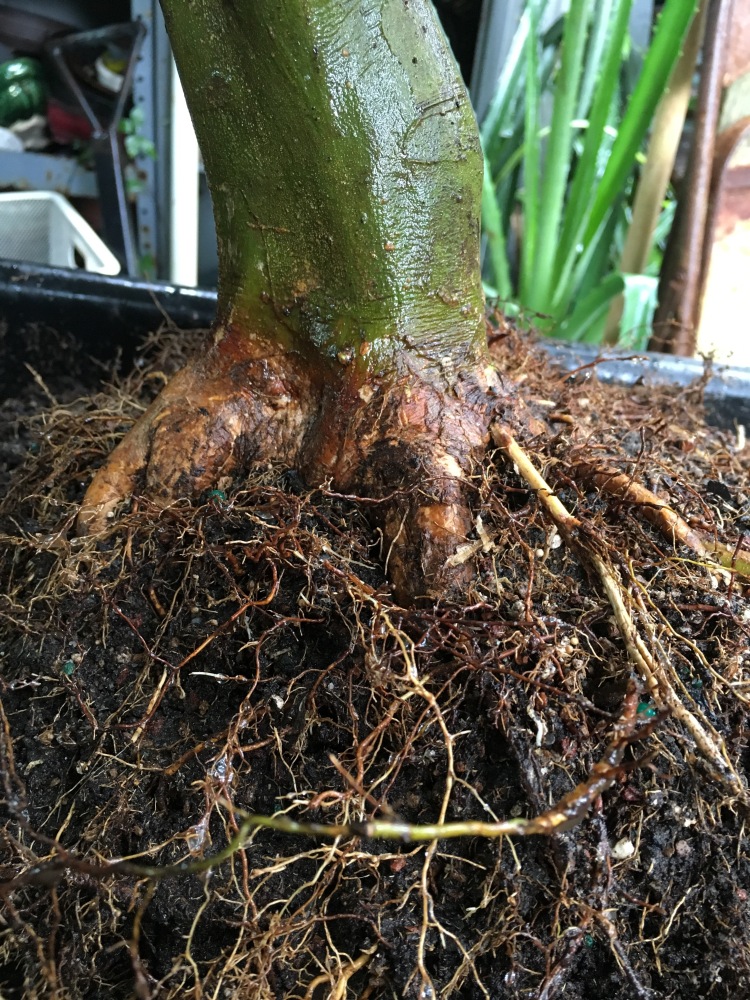 Let’s look at the pot. It’s an interesting design. I got it from The Bonsai Supply down near Ft. Lauderdale.

You’ll notice the rings. That’s a design concept that allows you to tilt the pot at the best angle for the tree.

This was one of the first produced so there is a flaw: if you tilt it, the drainage hole isn’t at the lowest point. 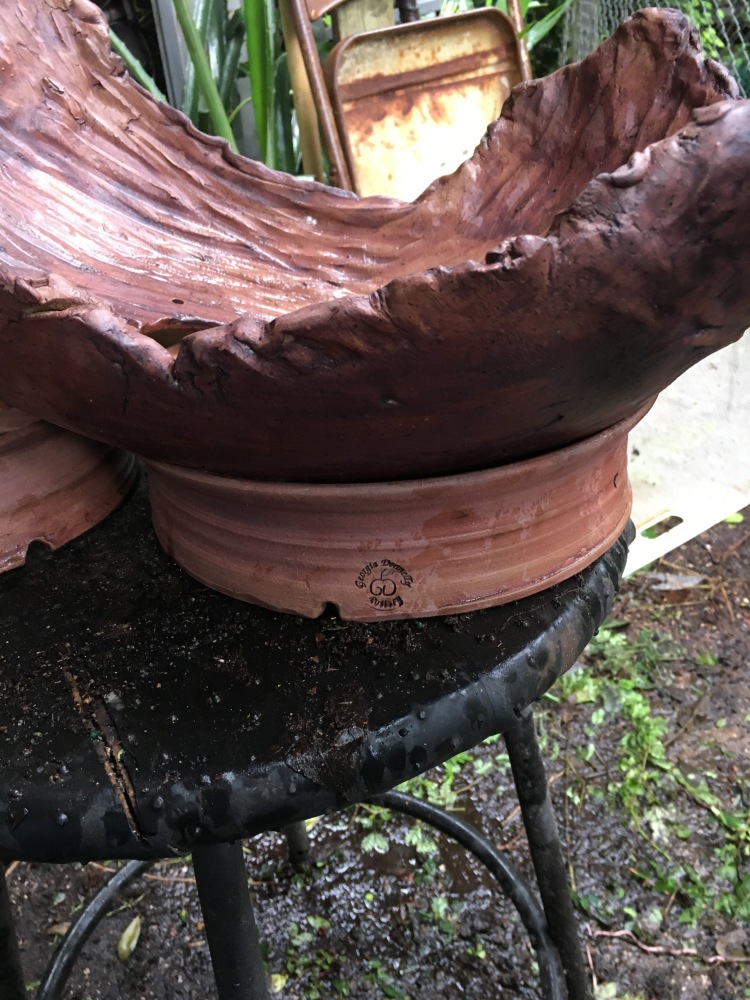 So you’d get a pool of water and possible root suffocation.

The new ones have a bunch of holes all along the bottom so it’s not a problem now but on this one, what to do? Let’s try something risky. Let’s drill a hole.

The real secrets to doing this without shattering the pot is to let the bit do the work (don’t force it), make sure there’s a brace on the back side of the hole as you drill (wood is best) and to keep a pool of water to cool off the ceramic.

This is the bit I’m using, a masonry one: 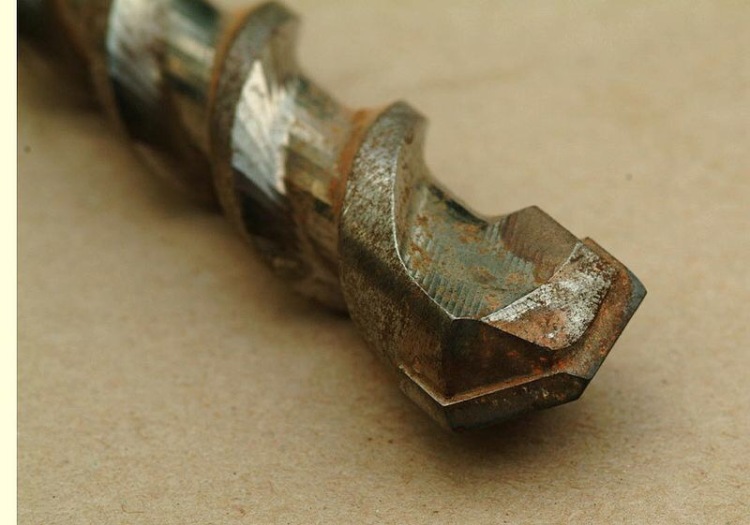 Slow and steady. I’m just about through but this is where the breakage usually occurs. The outside flare on the brill bit tip will catch on the edge of the hole and shatter the pot. 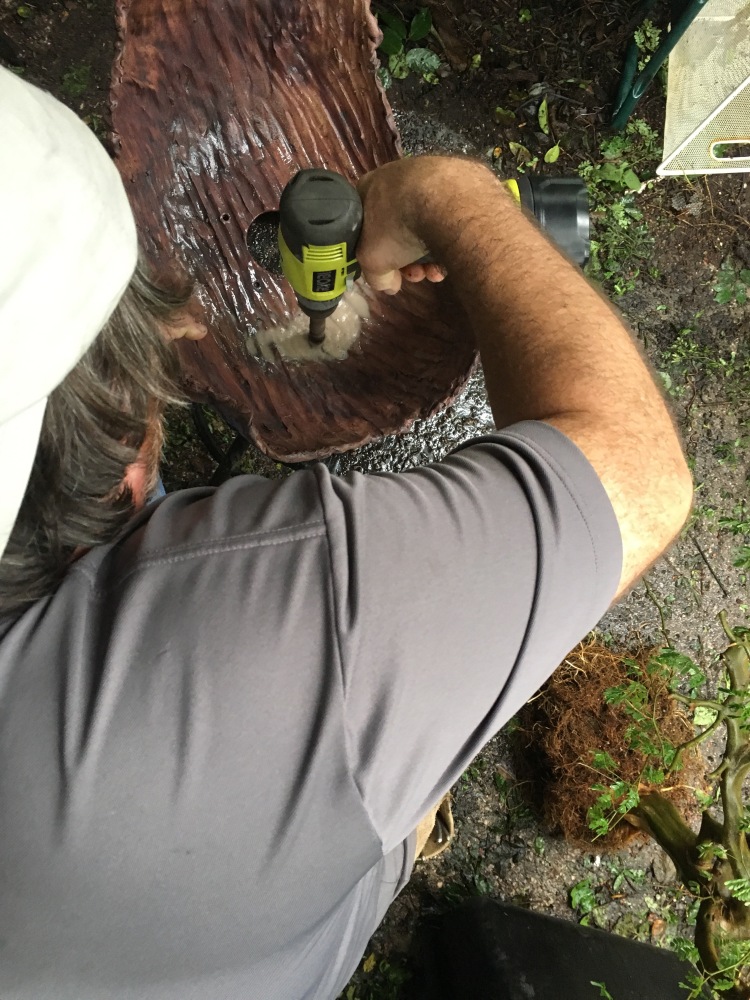 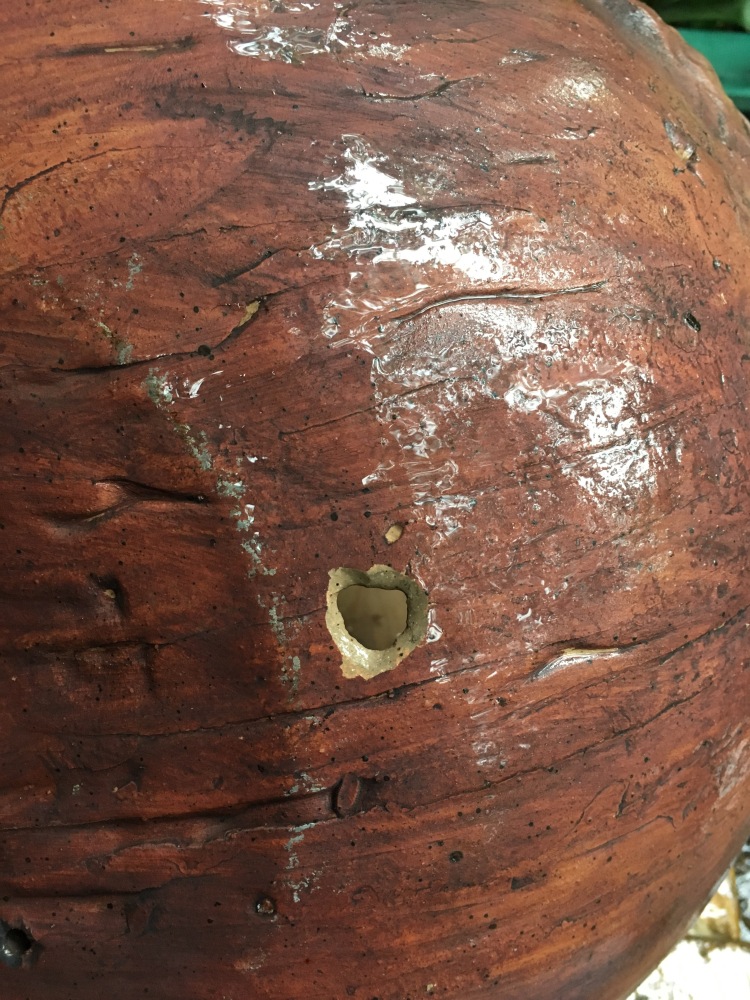 …..it doesn’t need to be perfect, it just needs to work. You can’t see it anyway. 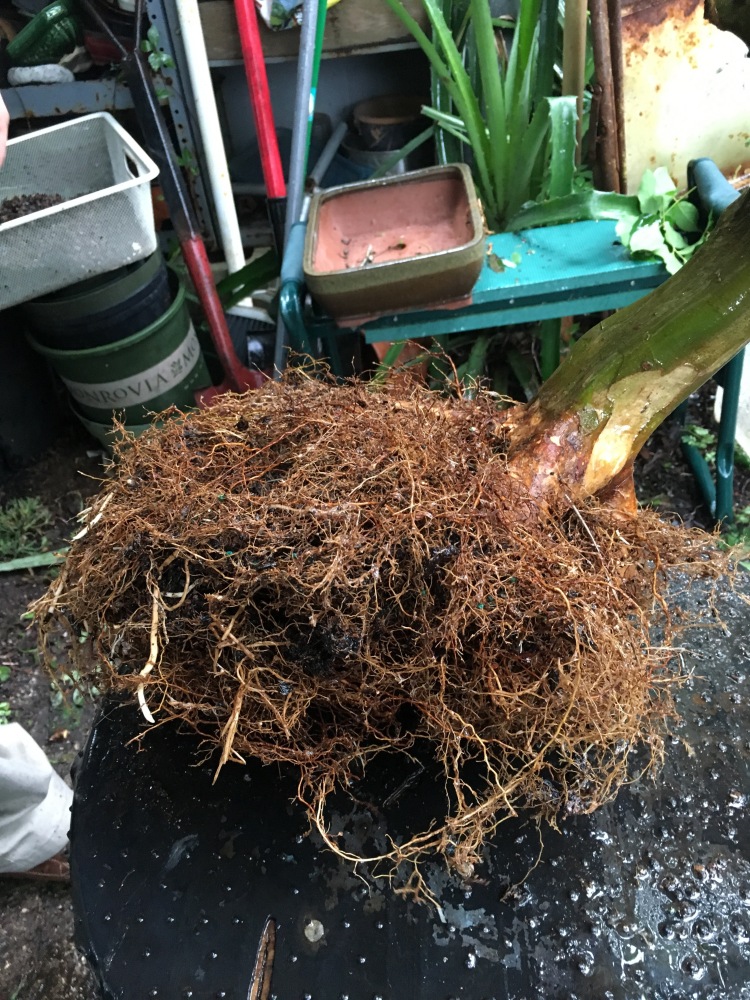 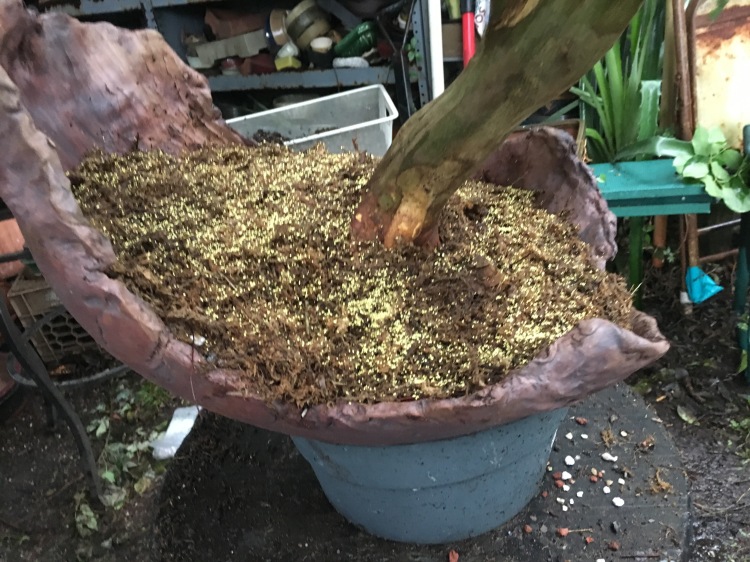 Now to the top. You remember the weave?

Let me go back in time about a half hour and show you what I did.

It’s a mess up top. That weave is interesting but not “bonsai” interesting.

Oftentimes, the simple line is easier to look at (relatively simple, for me) 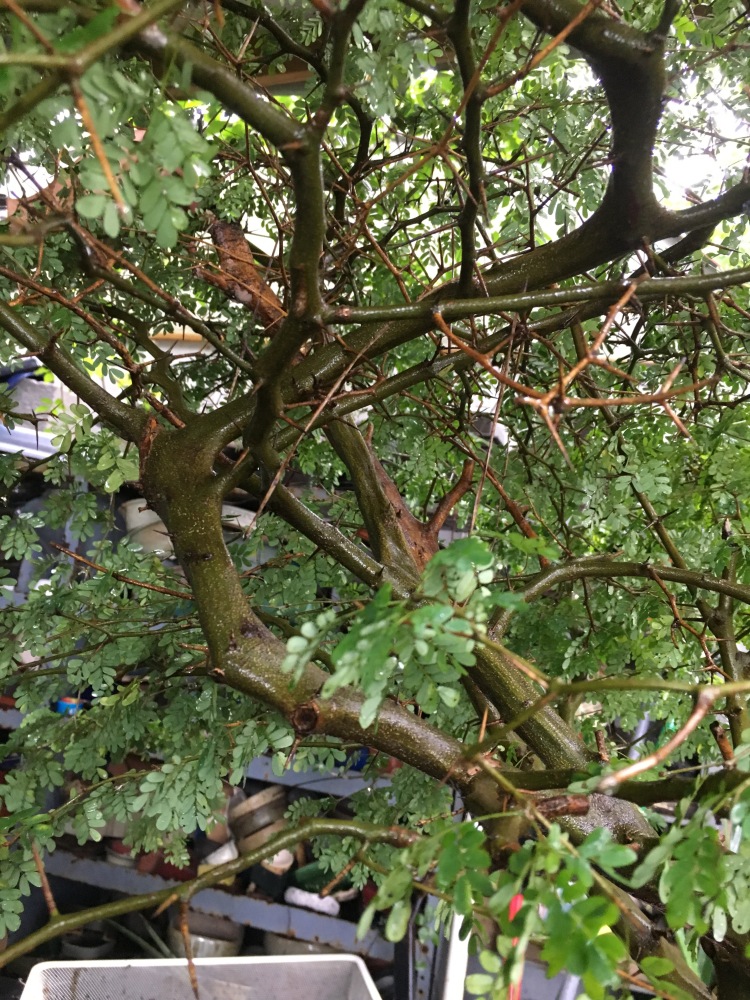 Just wait a few pics and you will see what I saw……off. 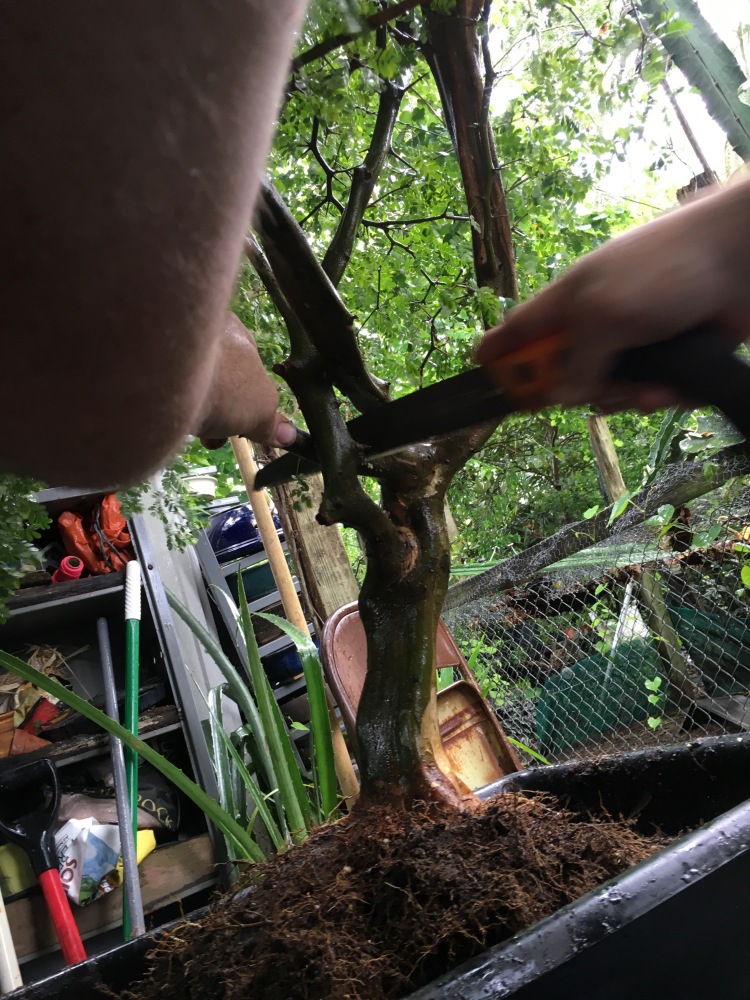 Now, there’s a big dead branch. Usually, I’d keep that. I’m a big proponent of deadwood, as you may know.

But, damnit, I just can’t figure it out in the design. It doesn’t work. 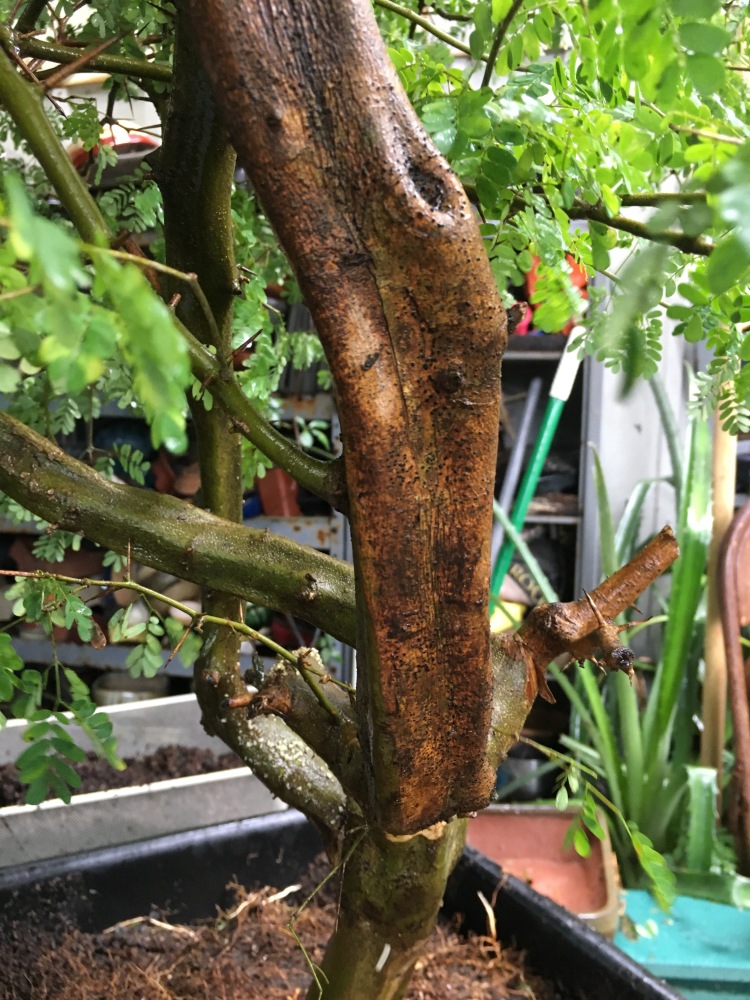 Getting there. What a waste.

But I’m not going to waste this branch….

I can air layer it off. Or, rather, David will. 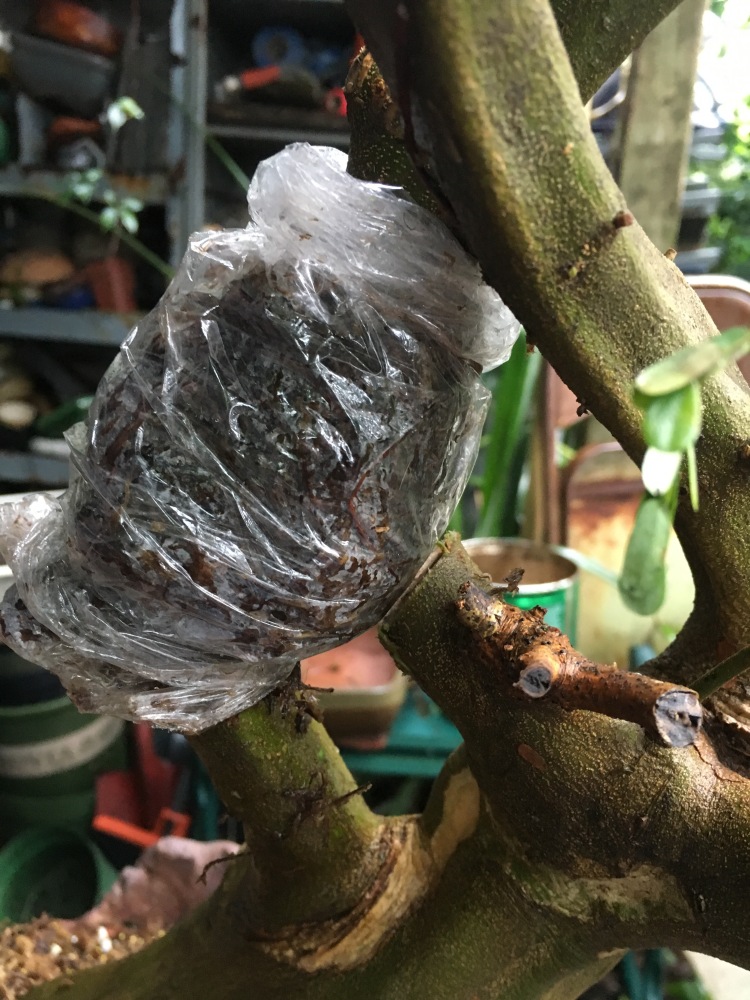 For the constant reader, yes, that is plastic wrap instead of aluminum foil. I’m out of foil.

Some wire, pruning, bending, and I sit and contemplate.

yessssss……David took a lot of pics of me looking at the tree. Four posterior pics for posterity, so to say.

Let’s get that lysiloma finished.

It’s against the rules but I’m liking the dual Jin on top. The foliage is very much like a Brazilian raintree but it has more red in the coloring. Here’s a good example of an awesome tree by Martha Goff. 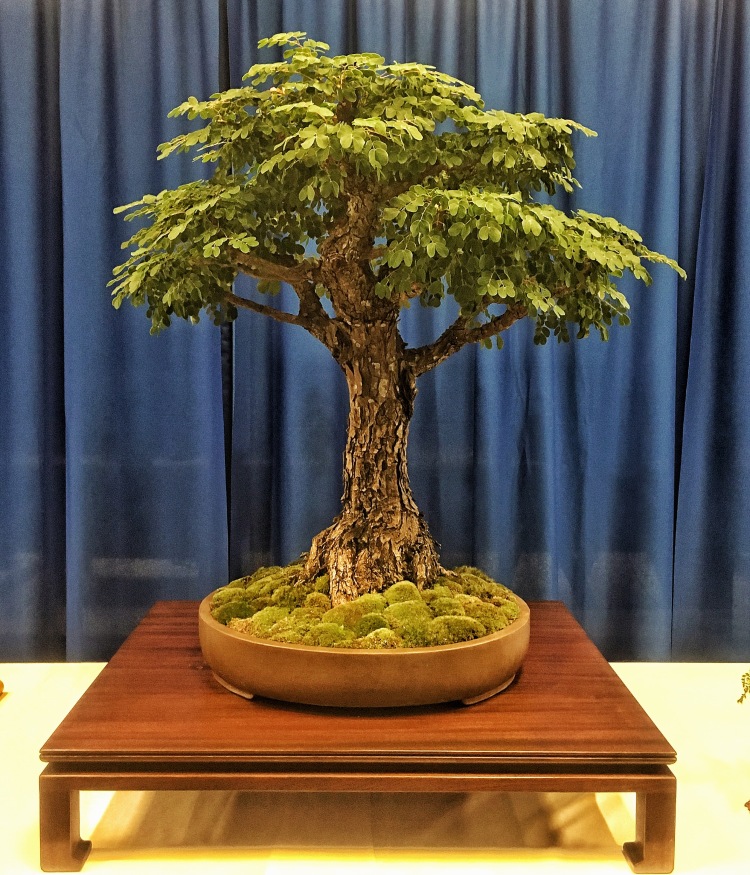 He trunk is about the same size as on my tree. Very different style though. I love her tree.

The horseflesh goes out into the full sun. 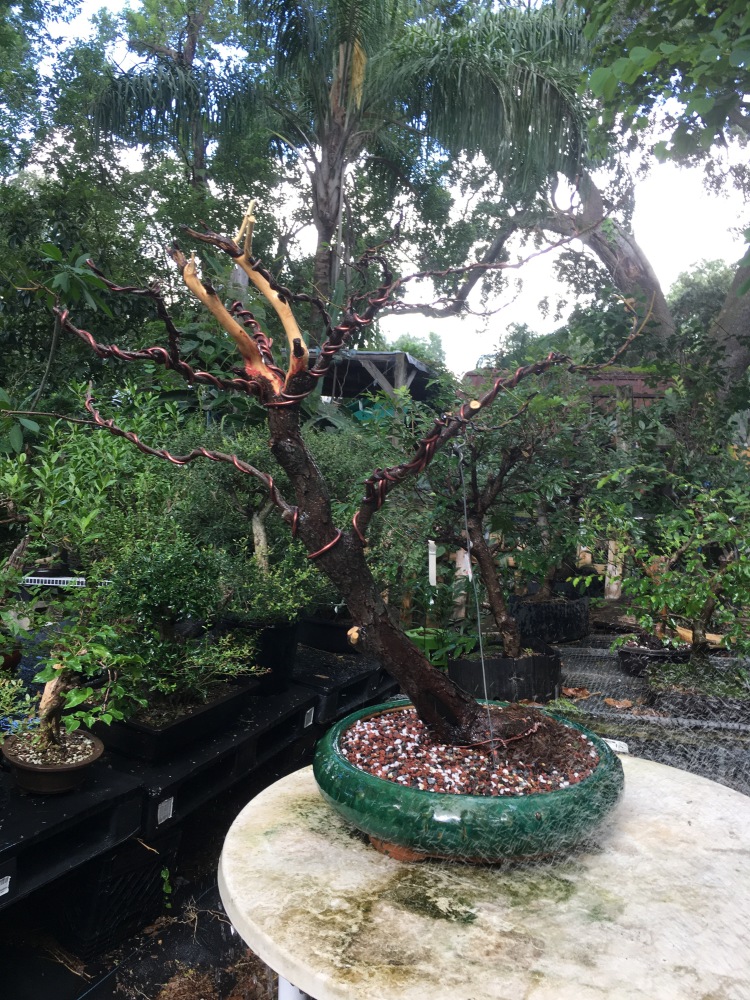 Yup, full sun. Here’s how I determine aftercare when repotting. Since we are removing roots, it’s important to understand the mechanisms that are set into motion when repotting. First, I usually defoliate the tree. This basically stops transpiration, how the tree “breaths” which is through the leaves. Transpiration also causes water loss. Roots are how a tree takes in water, so when you cut them, you are diminishing the trees ability to “drink”. If I don’t defoliate, like with a pine or juniper, I might put the tree into the shade for a few weeks, but broadleaf trees are able to be defoliated, so I can put them into the sun right away. This stimulates new growth and, with new growth on top, you get new roots on bottom. Simple horticulture.

Back to the raintree. There’s some serious hardware on it. 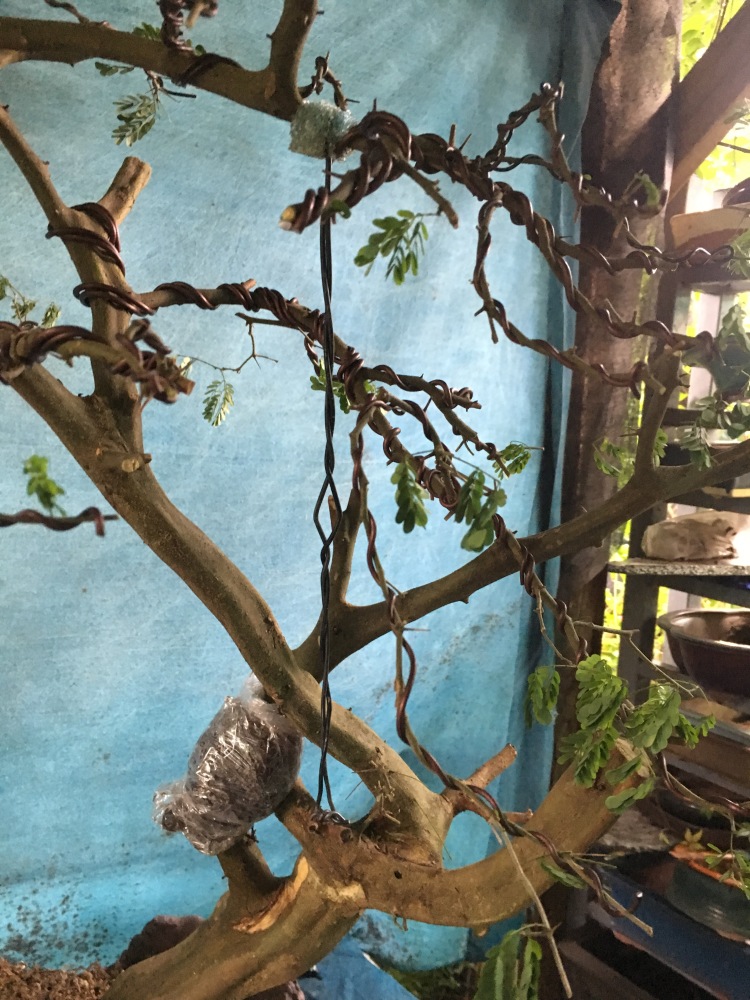 It’s hard to see the design with that branch I’m airlayering off still there. 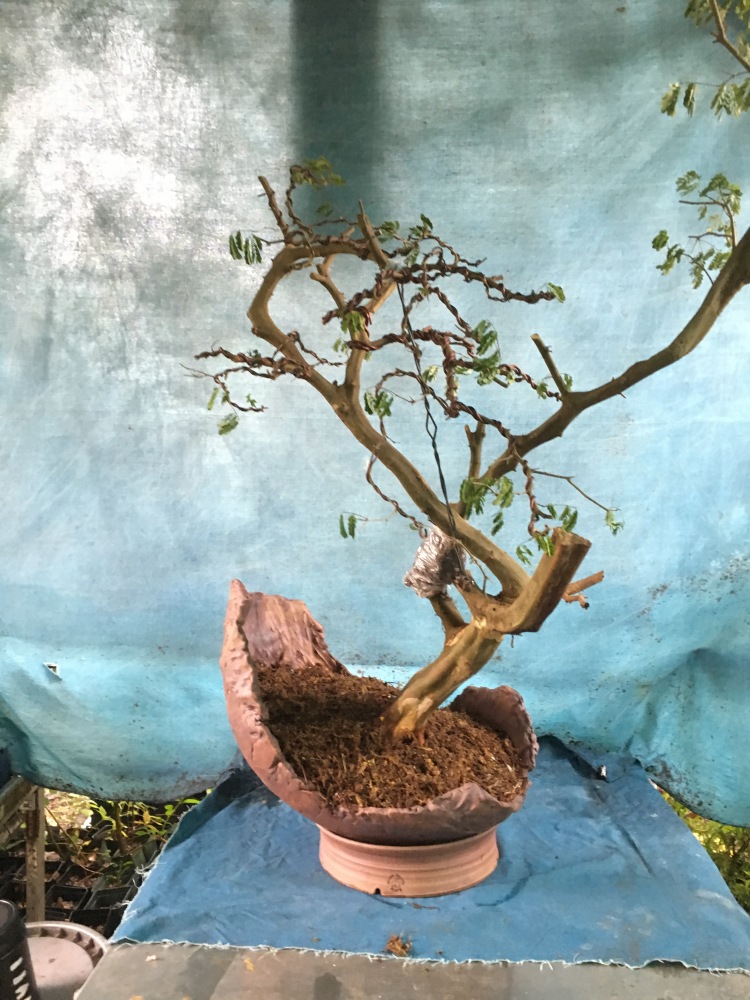 And that big branch stub on the right, it’s like a plank in your eye. 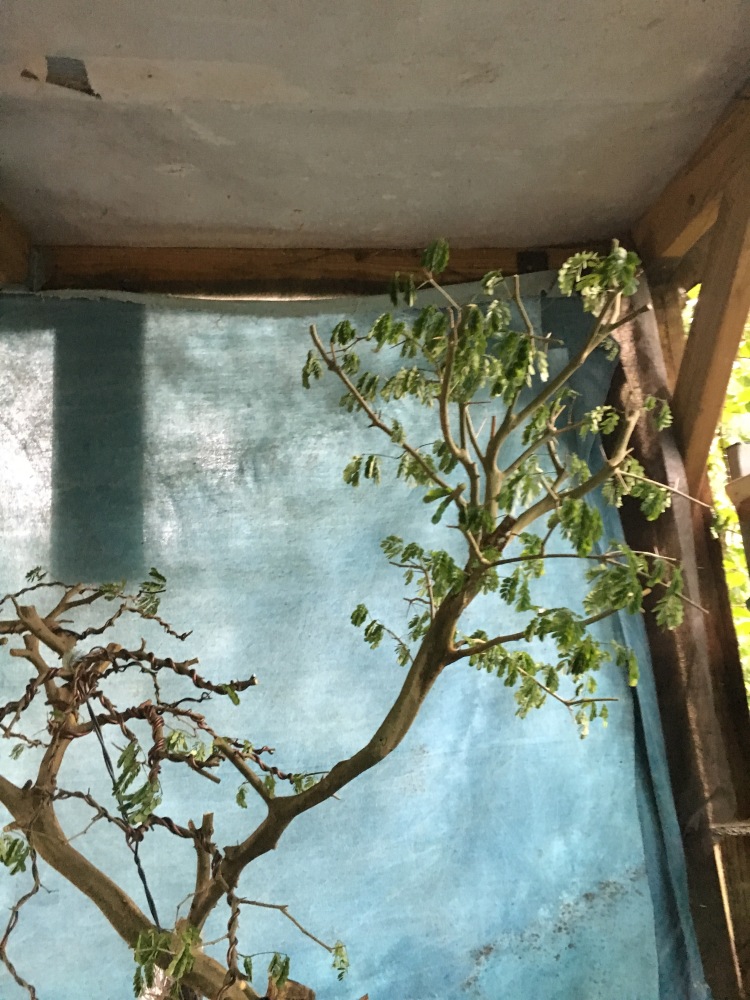 You see how I just couldn’t waste that one branch though? It’s a good tree by itself. 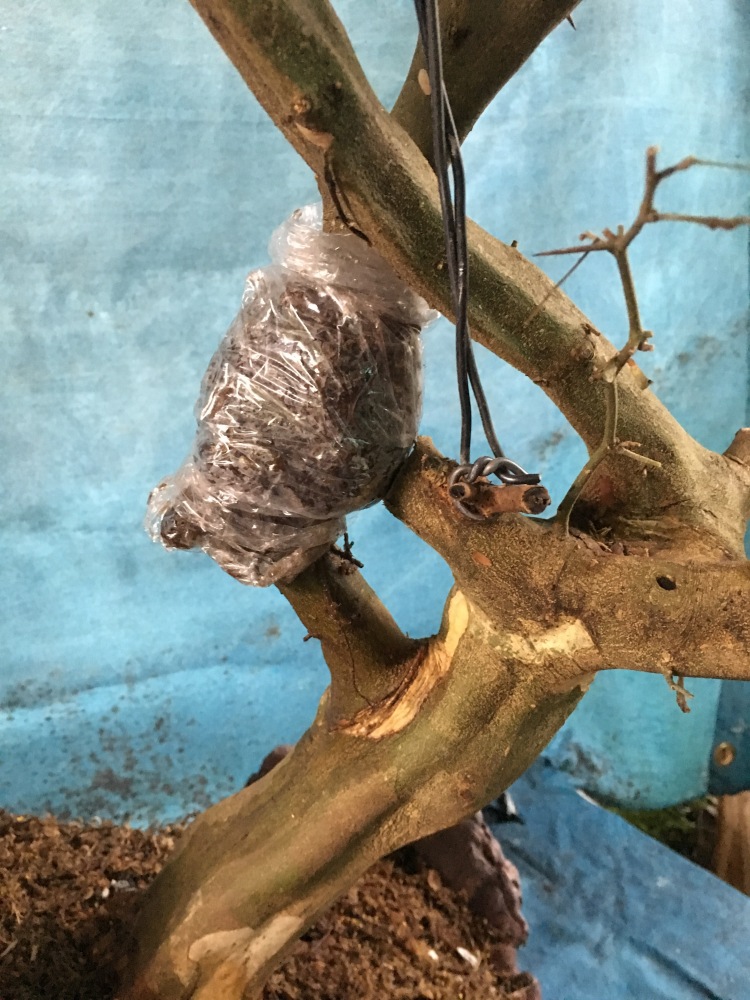 Let me play a bit with some photo editing….

David and I suddenly realize that we’ve made a big S-curve. ​Oh well, it’ll work out.

Oh, what do they say about men who grow big bonsai? You know that answer.

Coming up next, a tree called a pigeon plum, David gets dirty, and maybe you’ll see some breakdancing. Maybe I’ll make some pickles too.