Seriously, unless you’re an avid reader of the blog there’s no way you could guess who I got the tree from.

Here it was in its first appearance. Which was several years ago. 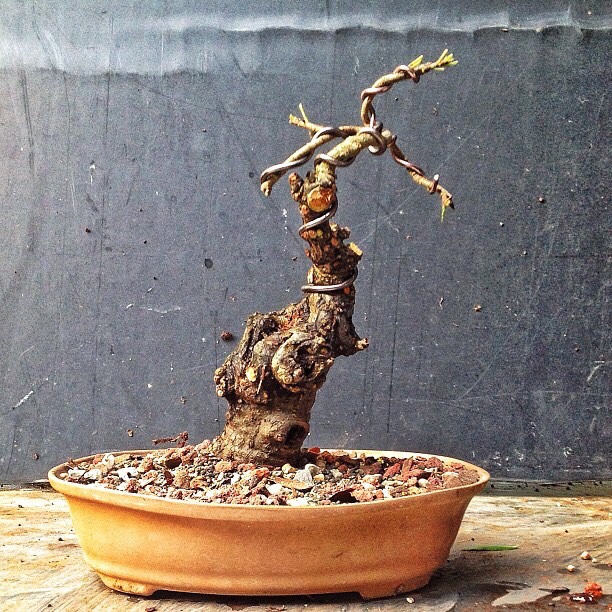 And now, today (after a quick defoliation).

And after a quick wire removal.

The pot it’s in is a Bellota, by the late Paul Katich.

I’m going to repot, rewire, and make some choices.

I get this all the time “uh oh, wire scars!” On a ficus or any fast growing tropical tree, wire scars are no big deal. It means that what this means to me is the branch is “set” in place. And I don’t have to rewire as heavily. Don’t feel like you’re a failure if you have wire scars. Take a look at even the most high end trees you see on the internet. They all have wire scars. Even Japanese trees. The ones that don’t have the one thing that can’t be faked: they have time. Time heals all scars, even wire scars. 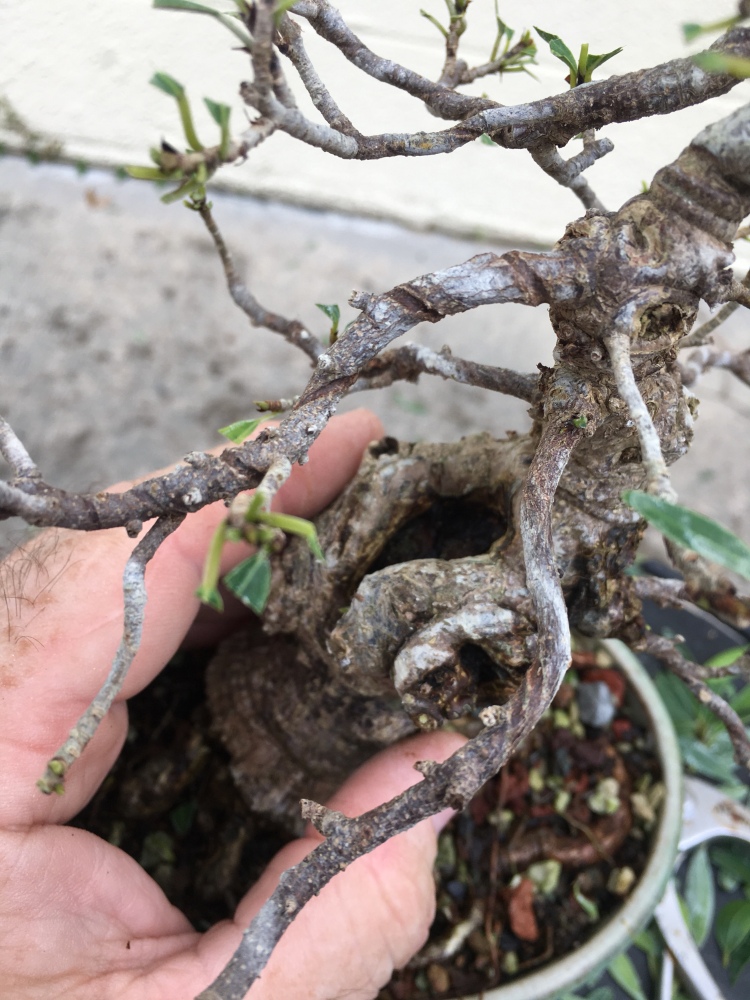 I get this question a lot “how do you defoliate?”

The answer is to leave the petiole attached to the branch stem. Or cut off at lest 55% of the leaf (many artists won’t cut off the whole leaf, thinking it’s not healthy. My view is you need to remove enough of the leaf to cause the tree to abort the old leaf and push out the new bud at the petiole’s, or leaf stem’s, base.). So when you see leaves like below…. 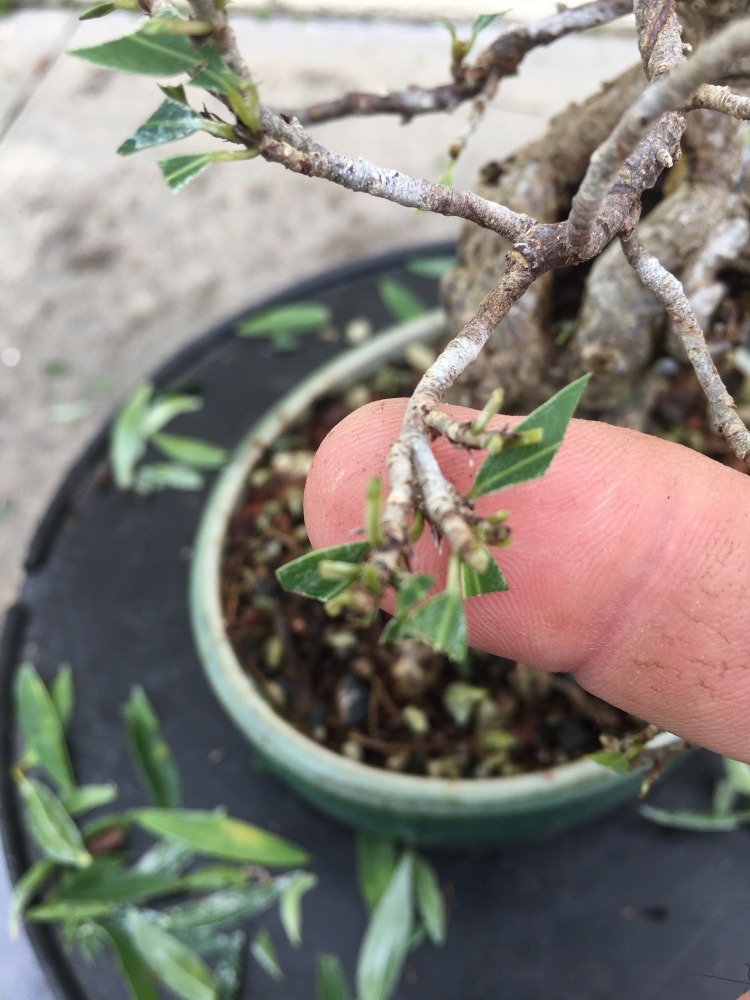 That’s just me being lazy on the first defoliation pass through. I’ll go back and “refine” the leaves. Ha!

Now that we can see the structure, we need to simplify each branching to only two twigs on each fork (which means it’s not a fork, considering a fork should have at least four tines on it, being the root of fork is “four”. A fork with three is technically a thirk. So it follows the a fork with only two tines is a twerk. Although it is kinda weird to say your’e using a twerk to toss your salad before serving it up……..but I digress).

Anywho, it may seem that it’s counterintuitive that I’m trying to build ramification by cutting off branches, but the structure will look much better this way and develop faster. 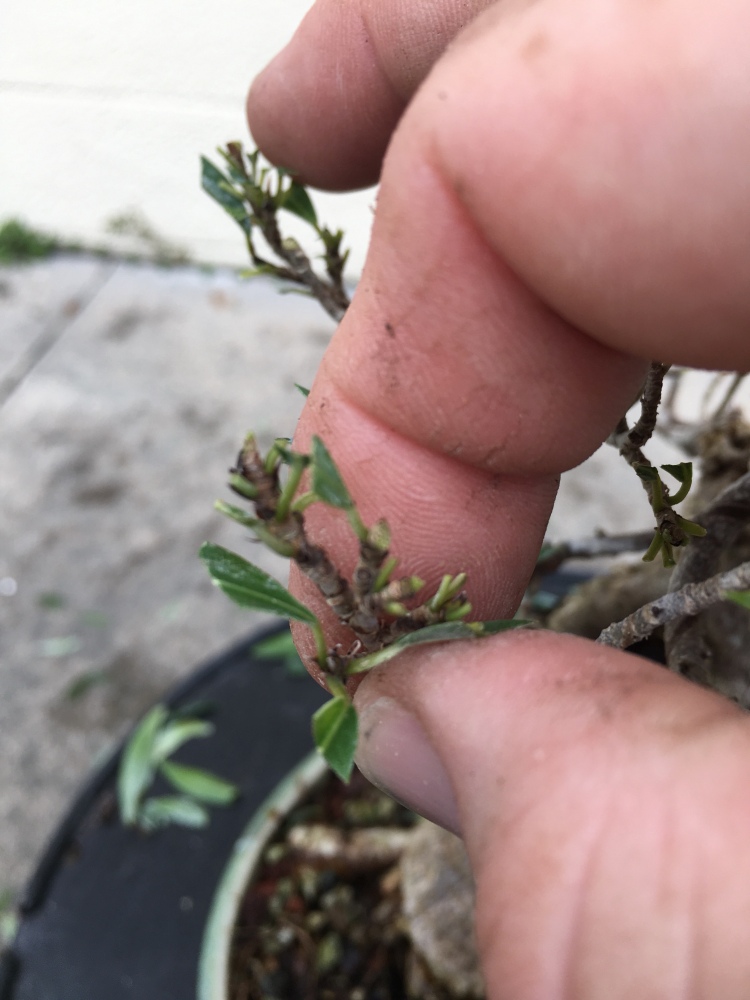 Example, we have four twigs coming out of this tip. 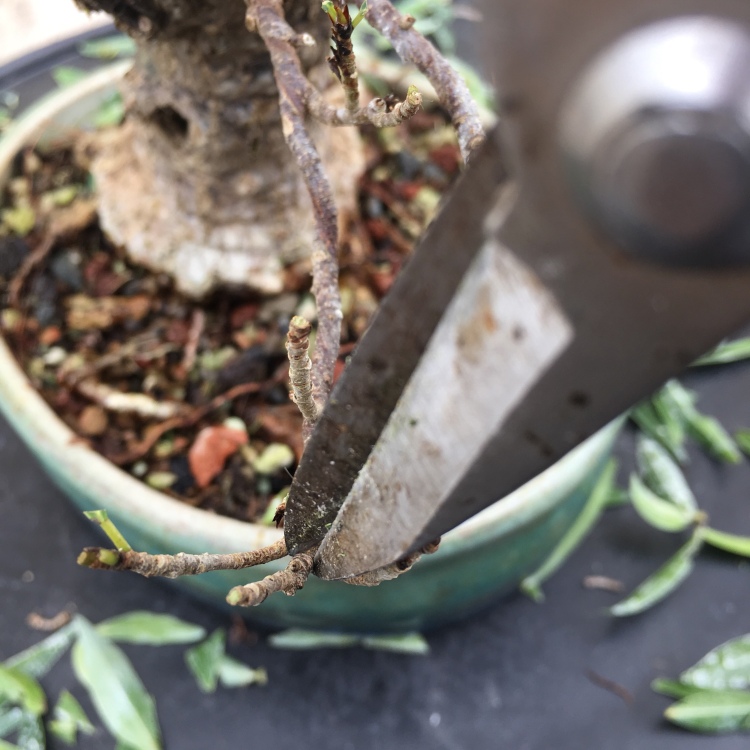 And we have a cleaner structure.

Another reason we prune like this is, in nature, a branch will self prune these types of branches using hormones (like auxin) and abort the less vigorous shoots.

I’m at my children’s school, waiting to pick them up, and I only have scrap wire to use, but that’s ok. You can re-use aluminum bonsai wire. Which is what I use almost exclusively. And have been called everything from a sissy to a low brow to a four year old for this. 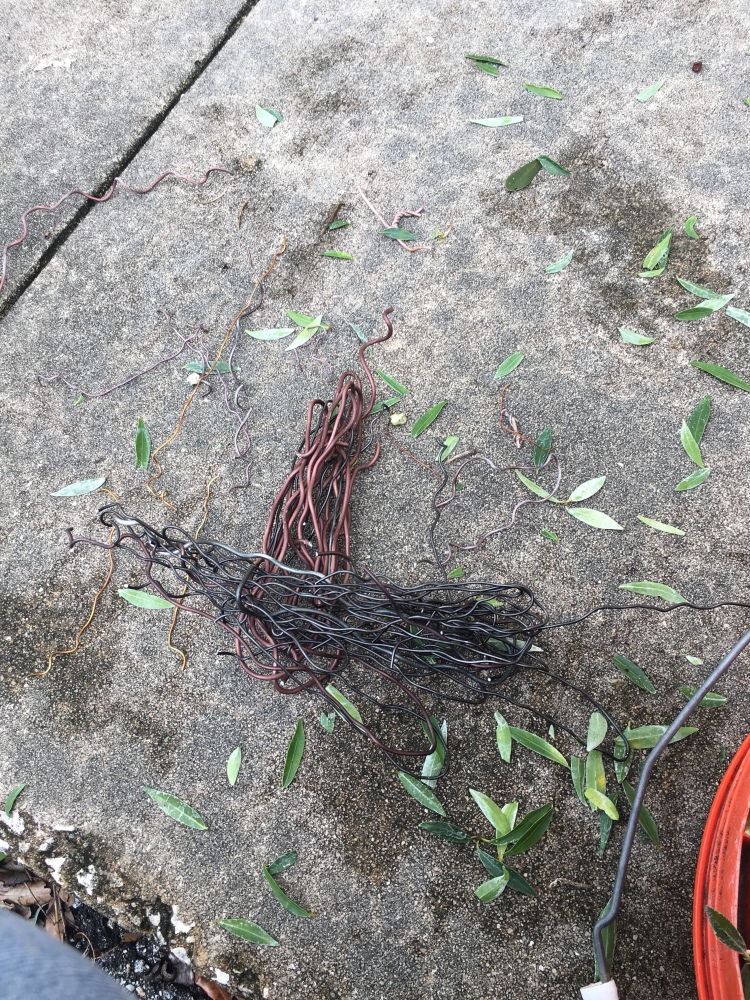 But who, in their right mind, would even suggest using anything but aluminum on a fast growing tropical tree like a ficus, huh? If you can answer that, I’ll give you a dollar.

Not only can aluminum be re-used, but it’s also almost infinitely able to be repositioned.

This branch needs to not only be wired into position, but also twisted so the “pad” is in a better viewing angle.

In this case, I’ll be twisting it clockwise (as you view it).

That means you twist the wire onto the branch in a clockwise spiral. 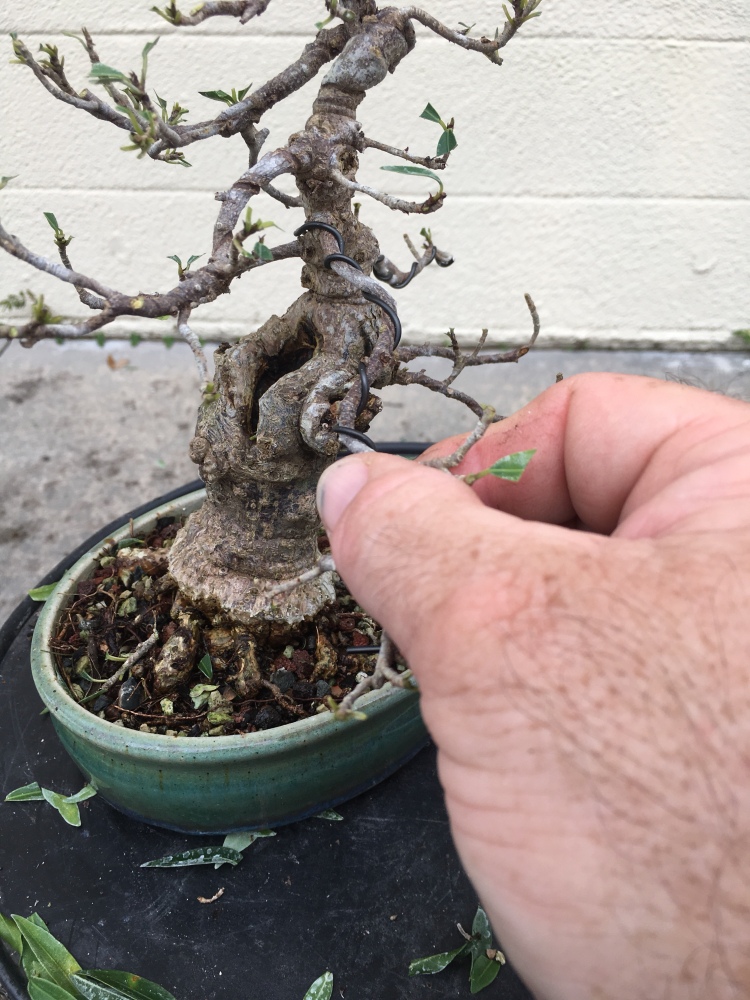 And, when you twist the branch, the wire tightens, preserving the holding strength.

If your wire is applied in the opposite direction of the way you are moving the branch, it unwinds and the wire becomes ineffective.

Now for that promised editing portion of the blog. It’s going to be exciting. Ready?

I don’t think we need this branch anymore. It’s too skinny and too low. 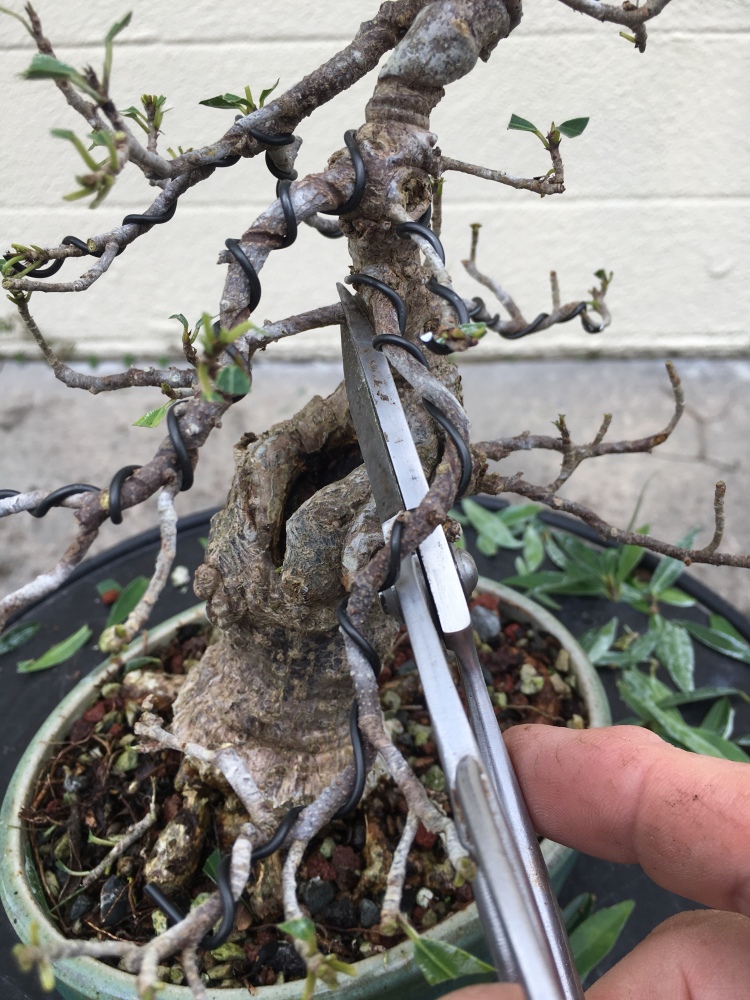 Now we are cookin’ with gas.

The kids have been picked up and it’s back to The Nook for pot selection. 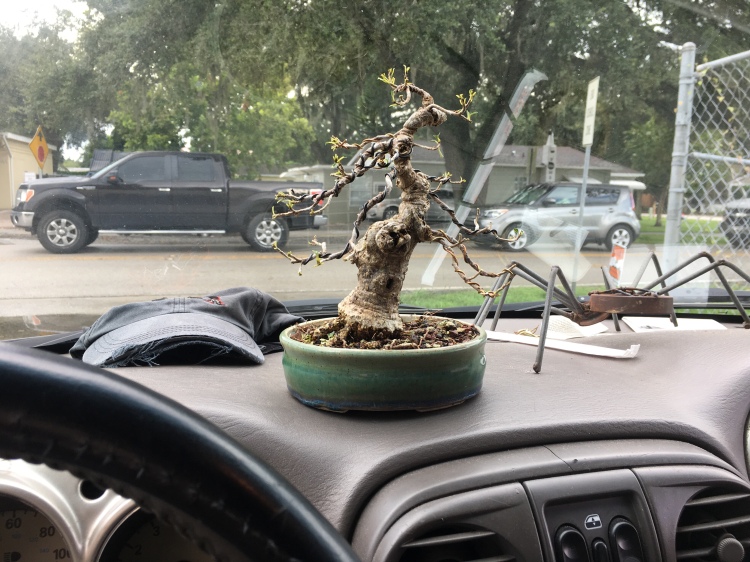 Don’t ever feel guilty for having more pots than trees. As you will see, choices are important. 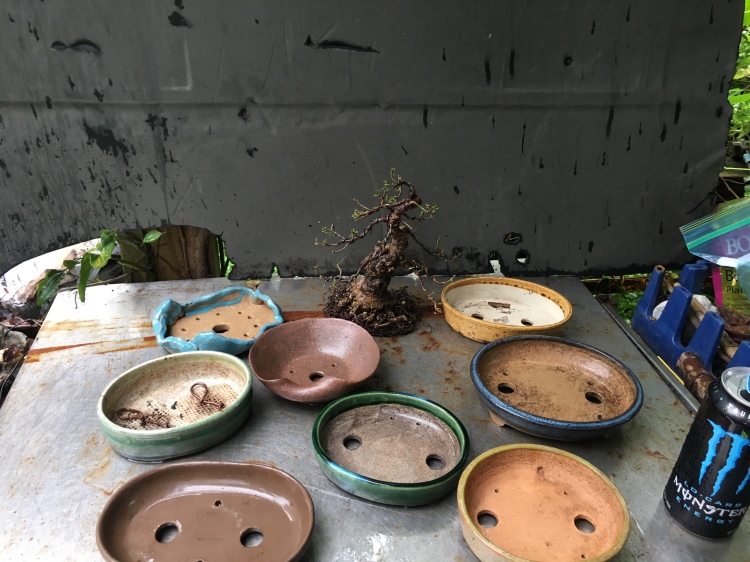 And you don’t have to water a pot. Unless it is pot. But that’s only in certain parts of the USA.

Whenever we repot, it’s important to improve the root structure. Just like a branch, if you prune a root it will spit into two or more rootlets. Below, where the bright white blob is (sorry for the undifferentiated blur of visual noise, iPhone camera…) 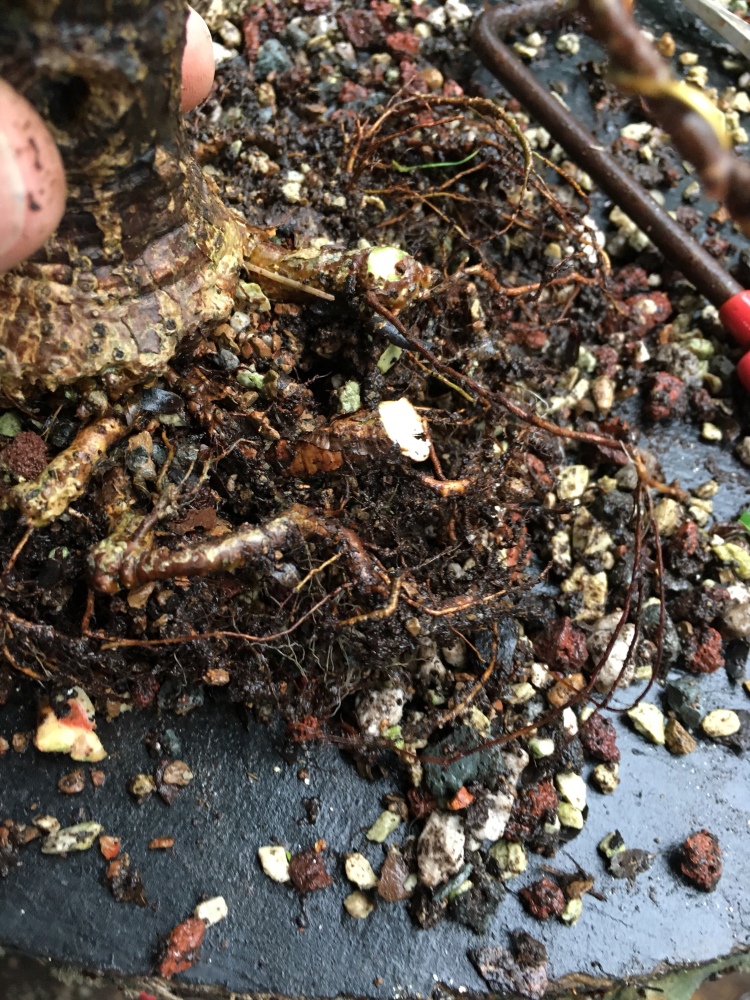 Your roots should have taper, ramification, et al, just like your trunk and branches.

The fitting room is open. How’s this…..

Not bad, but I need more pizzaz, more color. 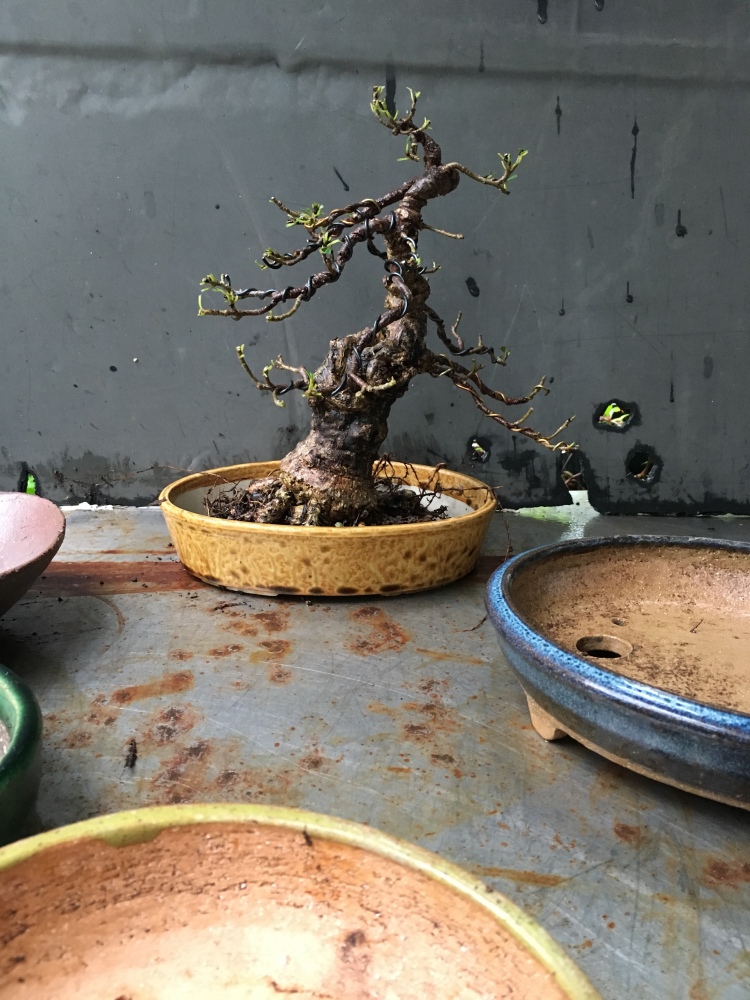 But it’s just a little too shallow. Maybe for an exhibit, if I ever show a tree again, that is. I’m going into a hermit phase….

This is a good green, but again, too shallow. 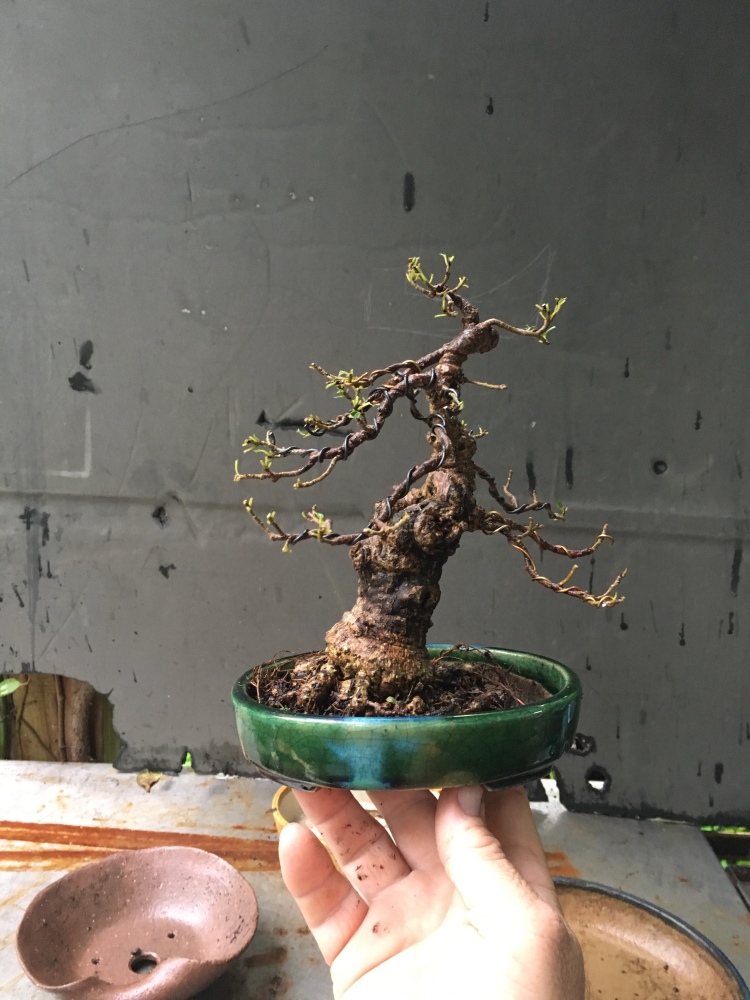 Aha! A nice color, good depth. I think I have found a new pair of shoes. 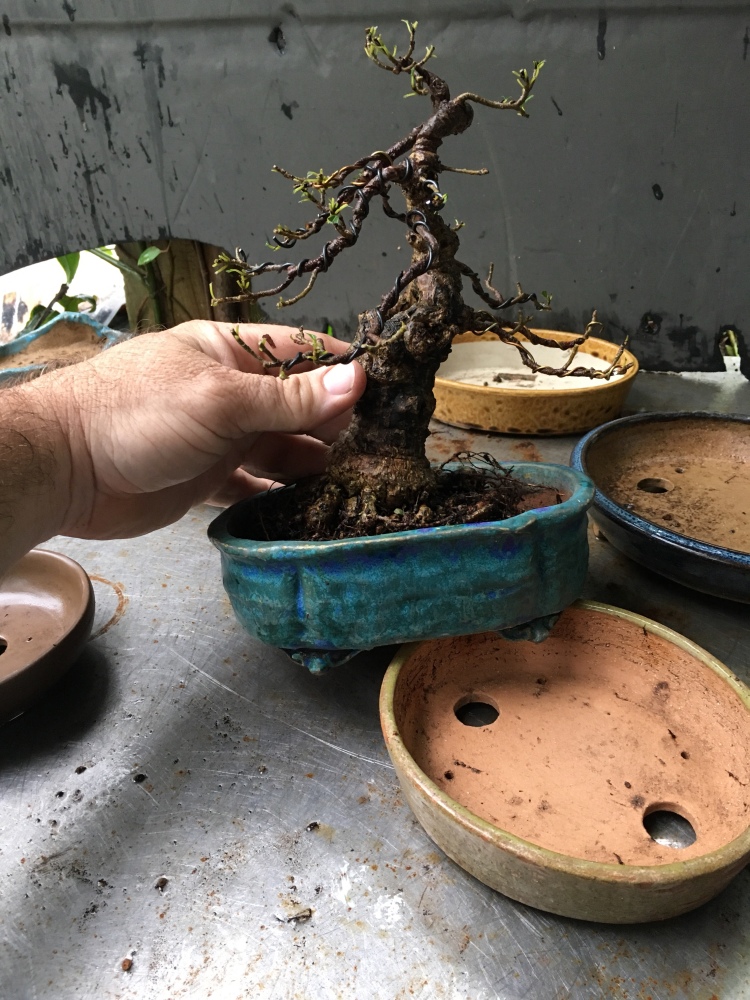 I especially like the cobalt drips on the rim. 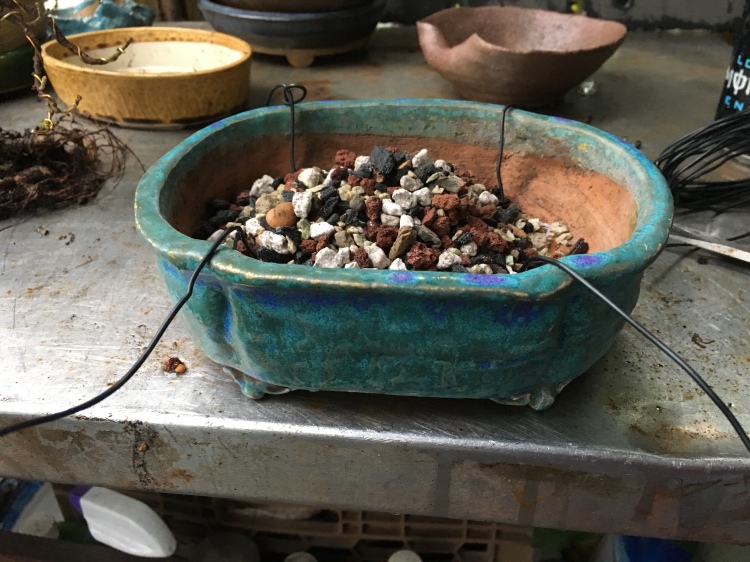 I’m not sure of the maker, but I’m sure someone knows who it is. 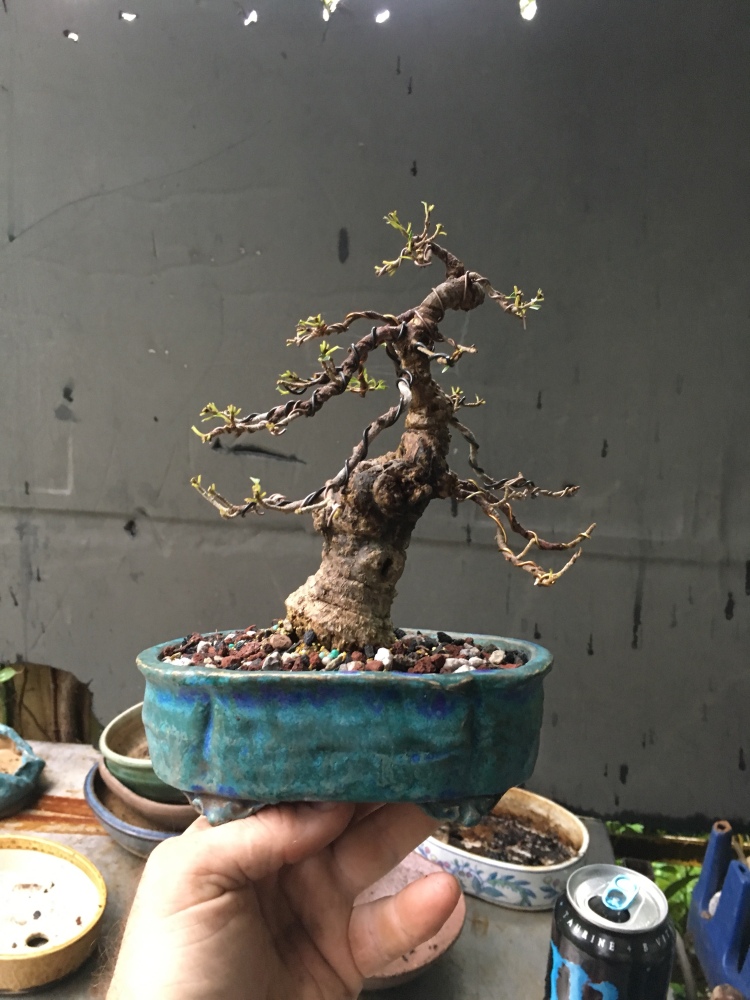 Well, I do have another tree. Another ficus salicaria that needs work. 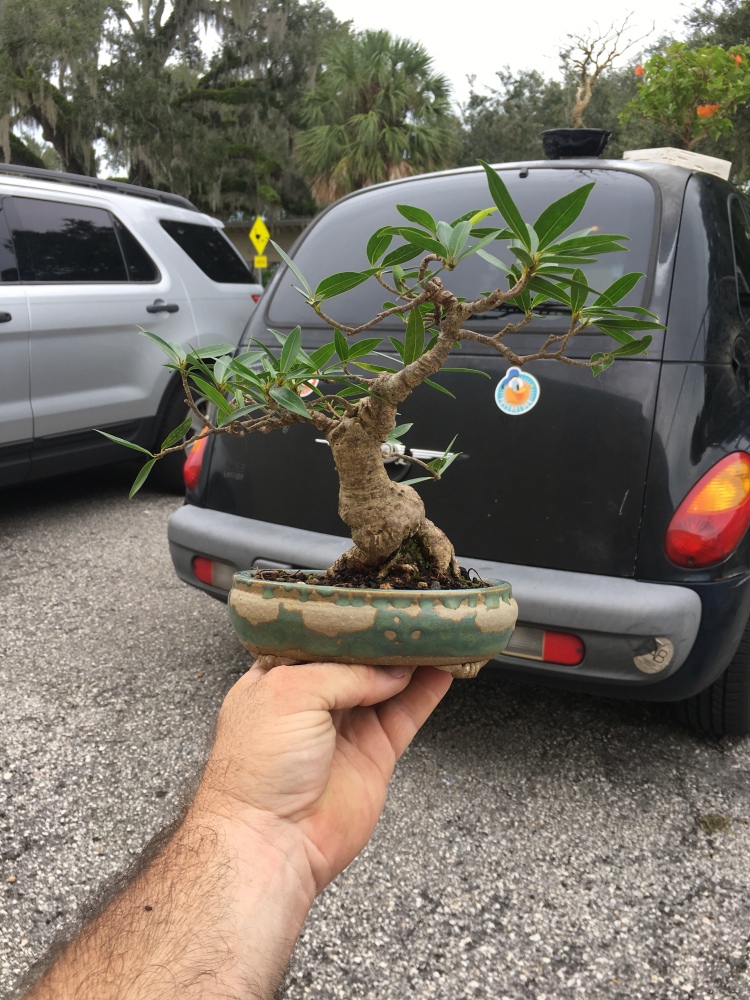 I made a game out of it on my social media pages.

I gave everyone a chance to pick the front.

I could’ve gone with either of the three choices.

Here’s the new pot. This year I’m going for deeper pots in most of my shohin, someone told me I’m a little shallow recently.

You recognize it, it was the pot that the first tree was in. 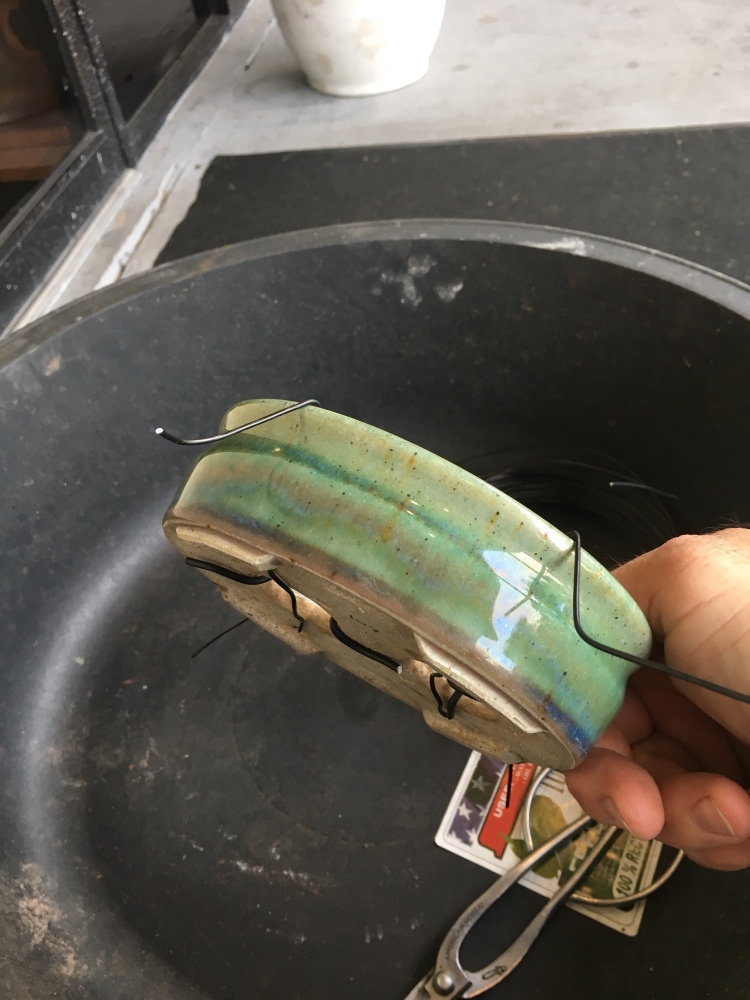 The roots, a little mo’ better than I thought. 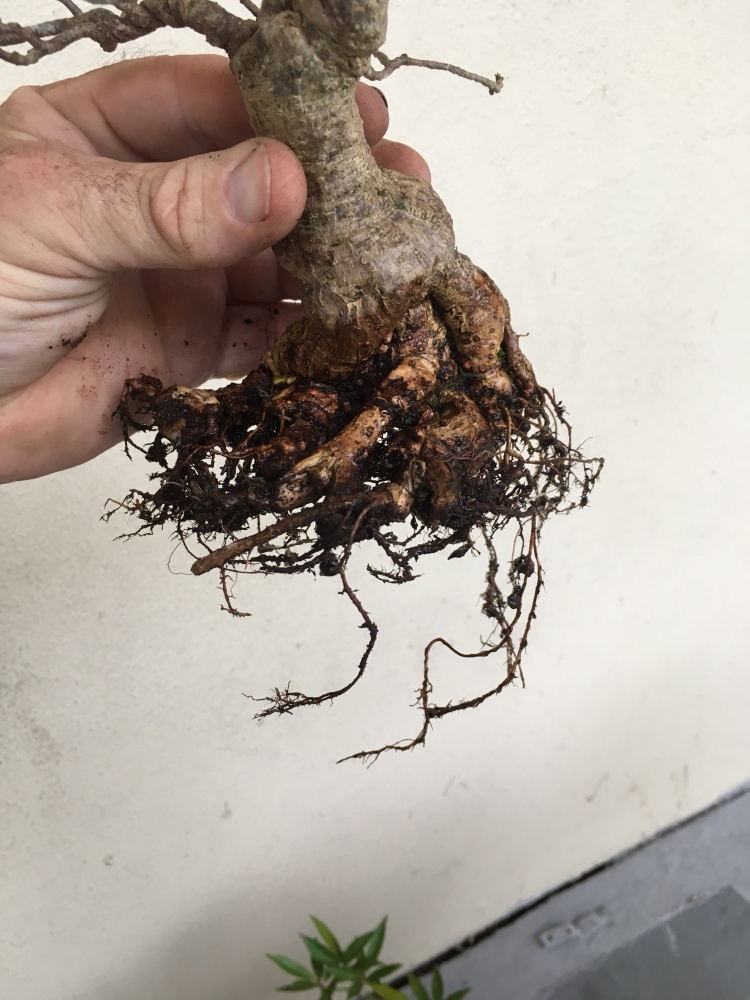 And my choice, the final result.

I guess the first tree needs a glamour shot too, right? 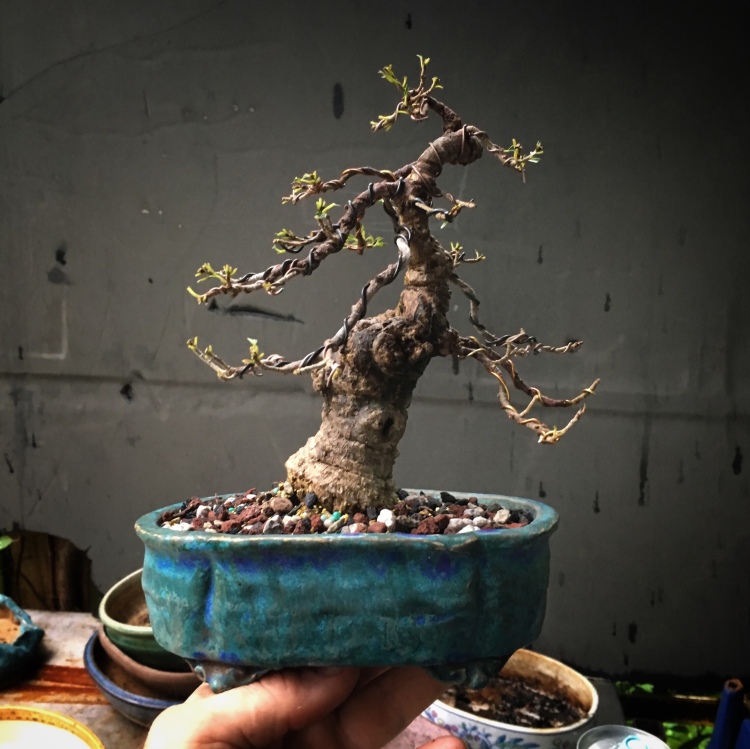 I just cropped, and added a vignette circle to it is all, darkening the corners. iPhone digital trickery (part of my tag line on Instagram).

Now, my loyal readers, I haven’t forgotten the blog title, the challenge falls to you all: Can anyone guess who sold me the tree originally?