Almost prophetically, the first two words mean….well, that’s a tough one. Like many words and phrases in other languages, the literal meaning isn’t the whole meaning.

This is Dale tending his kiln during his last pottery firing.

On the morning of New Year’s Eve, I found out that Dale passed away. It was not unexpected, but it was still a shock. He wasn’t a good friend, I had met him several times at the Bsf conventions years ago and had interacted on Facebook and Messenger several times. I had no idea what he thought of me. But, reflecting and thinking about him these last days, I’m beginning to really understand what I think, and feel about him and his bonsai legacy. 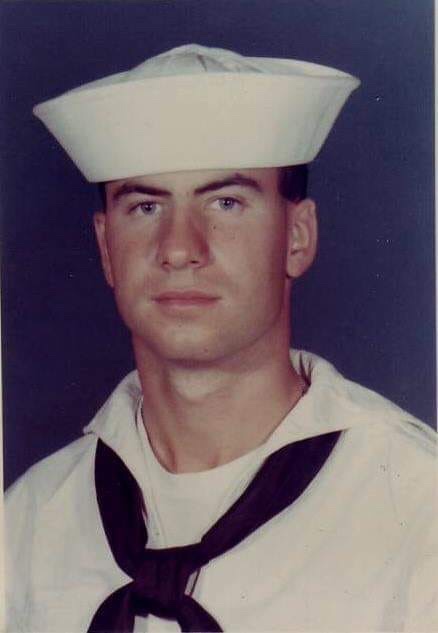 Here’s Dale somewhere around 1970, he was in the US Navy.

Dale had a long and successful time in bonsai. It is not my intent to list all his accomplishments and accolades. I’m not the one to do that. I can only write about what I know about him and my impressions of the man.

He had many different types of bonsai but, even being from Ohio, he shared a love of tropicals like I do.

Unfortunately, I only own two pots from him. This beautiful one, one of his premium brands….

And this neat round one.

It’s kinda funny that they’re both just about the same color, it’s more of a reflection of my tastes than his, as most of his pots were not this color. I believe the second one is in his trademarked “Dry Riverbed” crackle.

His usual style was unglazed, or with an oxide stain, and the textures were carved, rustic or with his crackle. 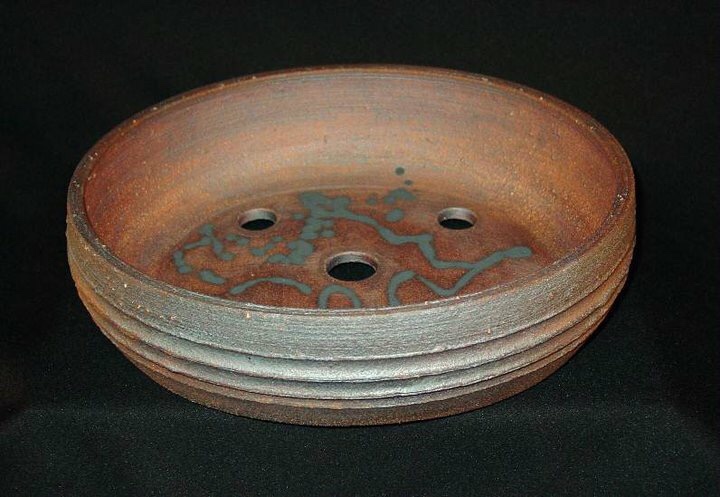 For the first pot I own, what I mean by premium is he had two ideas in pottery. His Facebook page (Click here) is called Wild Things Bonsai Studio and Yakimono No Kokoro.

Yakimono no kokoro. It, too, is a hard phrase to define. Yakimono is sometimes related to cooked meat over a fire (like yakitori) but in this instance, it is the fire part we are interested in. 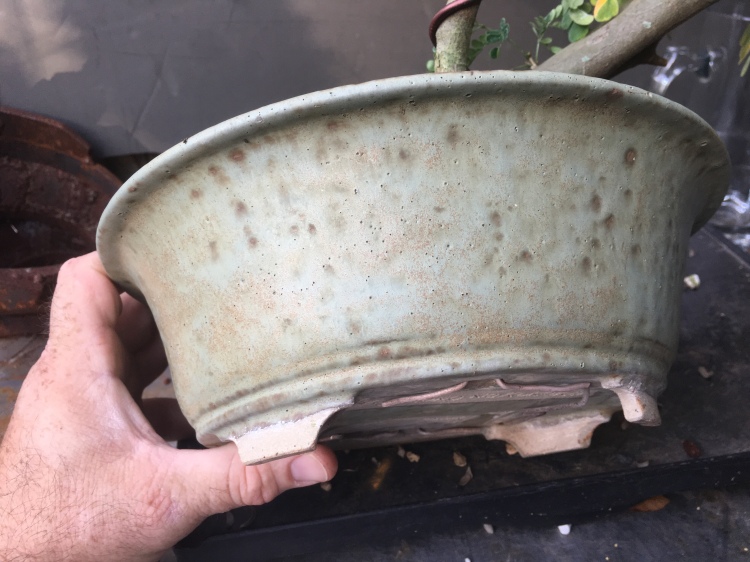 Interestingly, one of his favorite shows, about making knives and edged weaponry was Forged in Fire.

It could be interpreted that Yakimono no Kokoro means “a heart, forged in fire”. I wonder if he saw the connection. I’m sure he did, he was a smart man.

This is the bottom of the other pot I own.

This is how I remember him from that show. 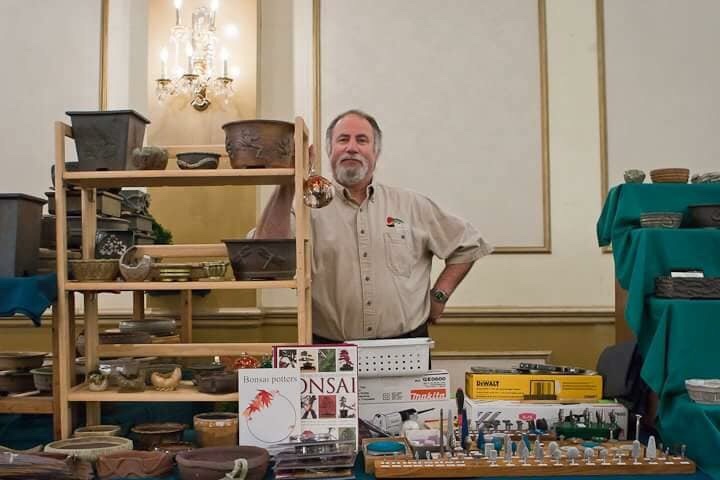 Not my pic, I pulled most of the ones I’m using here from his Facebook page.

When I met him, it was at a Bsf convention and he was just like this, behind his vendor table, watching the world.

He seemed to always be watching and learning. These last few years, even after all the time he practiced pottery and with his mastery, he took it upon himself to learn raku techniques.

He was also very outspoken. He had opinions and was a conservative who liked motorcycles and guns, voted republican and even liked Trump. As for bonsai and his pottery, he has a distinctive “Dale” style. You can tell a “Dale” pot from a hundred like them, because he was a pioneer in the bonsai ceramic culture in the USA and the world. I don’t think we’d have half the potters we have today, if Dale hadn’t paved the way.

But his was not a subtle style. And that’s the rub. I will only touch upon this for a bit but I’d like to point out the hypocrisy I’m seeing on social media at the moment, with people who definitely would talk badly about Dale, and now are mourning and typing that easy three letter word, RIP, instead of something original (One guy, who is the worst about backtalk, and in his typical tone, even wrote “That sucks”. Classy).

For transparency, I do not like everything he produced. Some of his pottery is too coarse for my tastes and (style-wise) for my trees.

But he was an artist.

And I respected his right to do his art as he saw fit. That’s the difference between intermediate and advanced artists, one group wants you to do as they do, wallowing around in the cold soup of the status quo, while the other wants you to follow the muse, wherever it may lead you.

Dale and a motorcycle…..and a cat

I think I even annoyed him many years back when I wrote an article for the Bsf magazine and said that samurai carving tools weren’t good for hobbyists. But I believe he had forgiven me in the end. I had purchased some of his last carving bits a few months ago and he told me I’d better do a video using them.

There’s always a battle in any small art community for purity in technique, in execution and subject matter, and in taste. Dale didn’t care, and that pissed off people.

And I’m glad it did, because he made an impression on the American and international bonsai scene.

Dale, thank you. I wish I could have been a better friend, especially towards the end, but I’m not very good with dealing with sickness. My experiences throughout my life have not left me in a good place with death and I just don’t know how to respond to it.

This is what hung over the entrance to Dale’s bonsai garden. It now hangs over the gentleman’s garden in the above picture in orange, Mitch Boatman. Mitch really became a good friend of Dale’s in these last few years. I envy him, but he worked at it too. Mitch is becoming one of the pre-eminent suiseki diaza and bonsai wood carvers in the country. He is also on Facebook, if you’re looking for that kind of work.

All things must pass.

All things are transient.