This tree is screaming at me. Its almost deafening.

It’s screaming louder than the last time I spent too much time out with the boys and came home to find my wife, She Who Must Be Obeyed, rolling pin in hand and rollers in her hair, wearing her faded pink bathrobe and fluffy white bunny slippers, “explaining” to me that she was not pleased. Yeah….

I’ve seen many times on the Internet forums, from people not familiar with how trees and plants grow, the question “What’s wrong with my tree?! It’s getting yellow leaves and they drop off!” 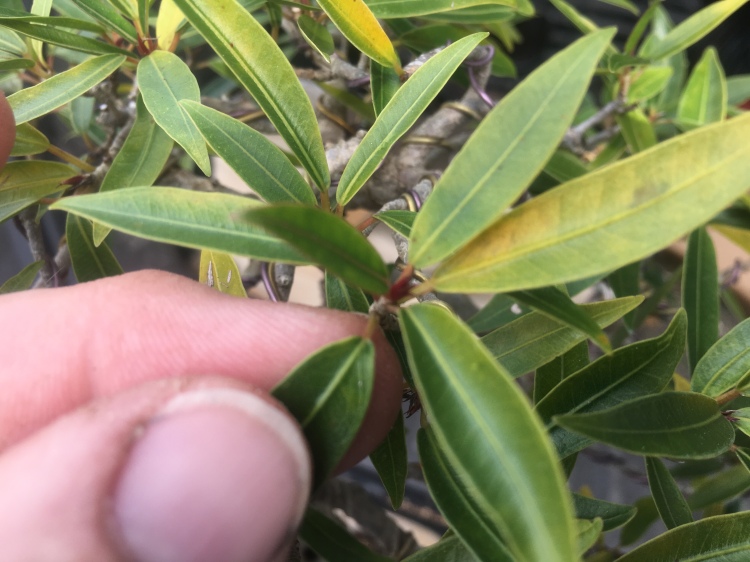 And, in no uncertain terms, this tree is dropping leaves. In terms of an organism with no mouth, tongue, lungs, or voice, I’d say it’s screaming. And, much as with ones wife, we should learn to, not only listen, but to understand what is being said.

Trees don’t keep their leaves forever. And, it being springtime, what’s a better time to change your wardrobe than when it’s time to start growing again? 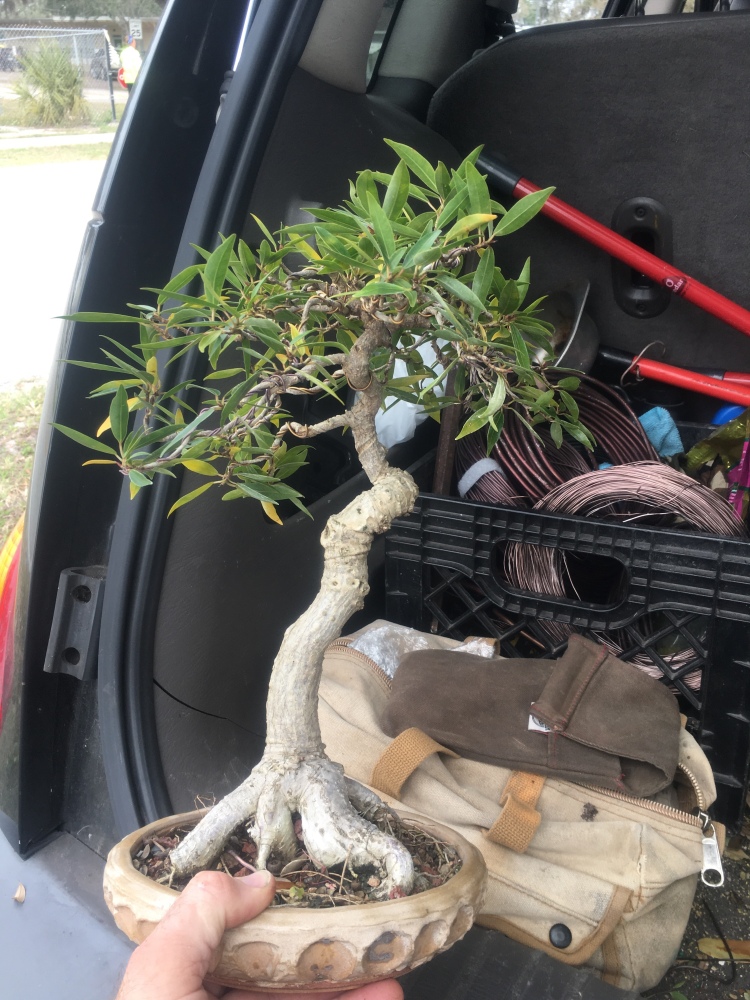 I’m thinking of doing a Filk Song version for bonsai called “Quick start my Art” about how one can use a trees growth processes and the hormones that control them to accelerate growth and development.

In this case, instead of waiting for the tree to drop its leaves, we can move the tree forward a few weeks by defoliating.

Which brings us to the scissor.

In this case, I’ll be leaving the growth tips. It’s early spring and leaving the tips on here will kick start the new leaf emergence.

There we go. You’ll notice I still have the wire on. I believe I applied it last fall. It’s a good way to get the branches to stay in place without too much wire marking to wire in the fall when the tree isn’t growing too much. 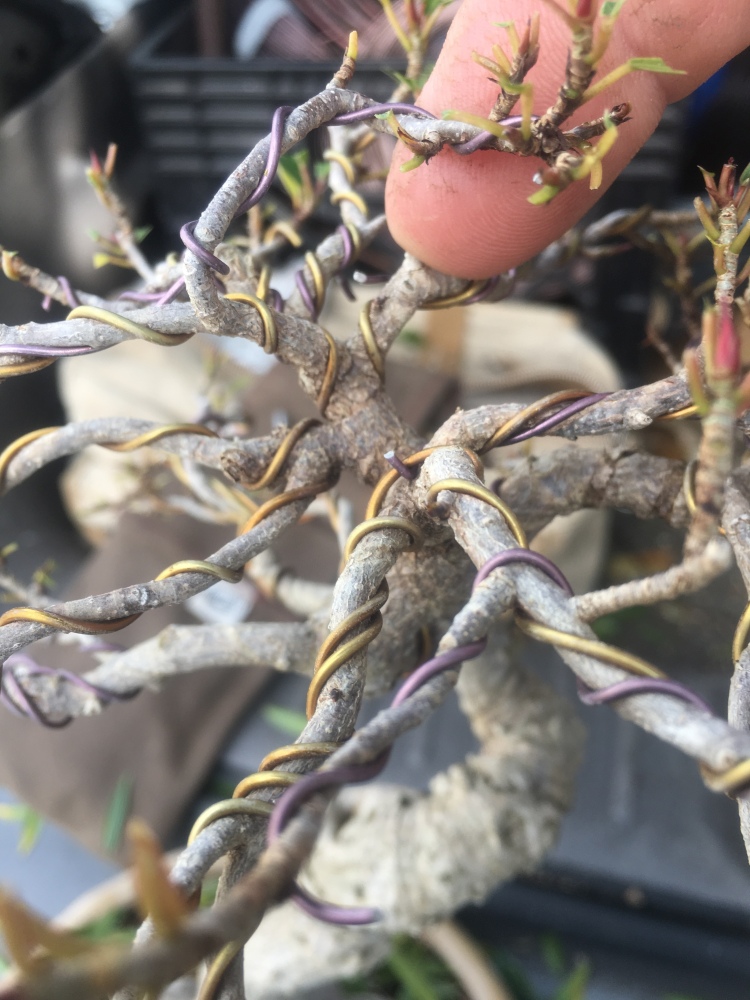 That’s the whole tree by the way. It’s one of my oldest, and that root base is amazing. 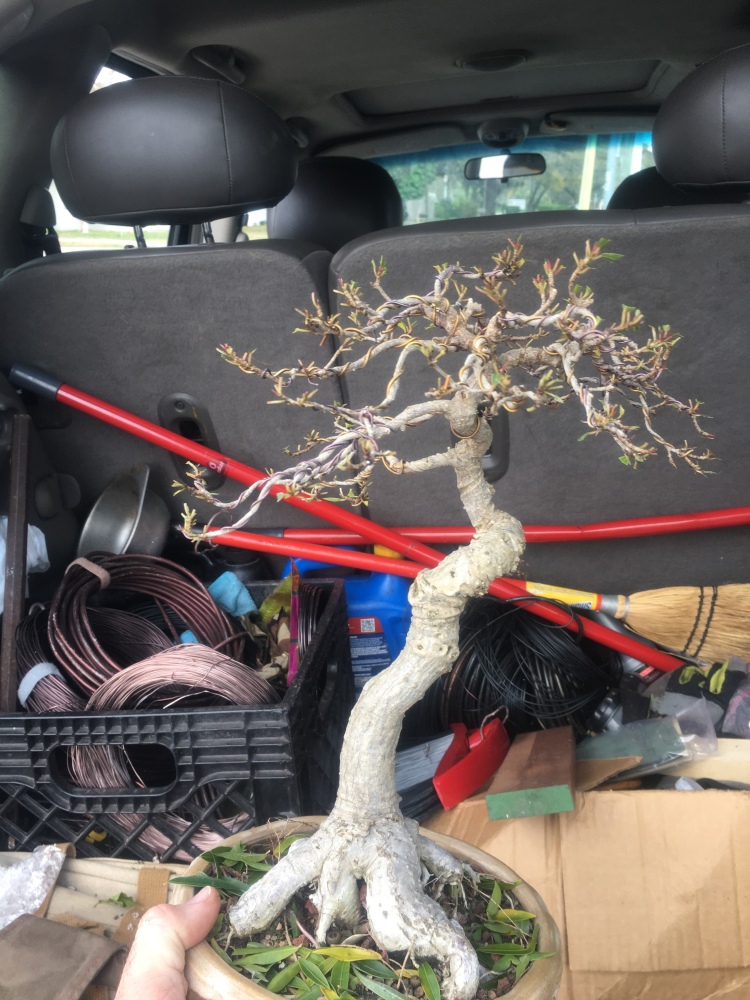 There’s way too much wire, what kind of psychopath uses this much wire……….. 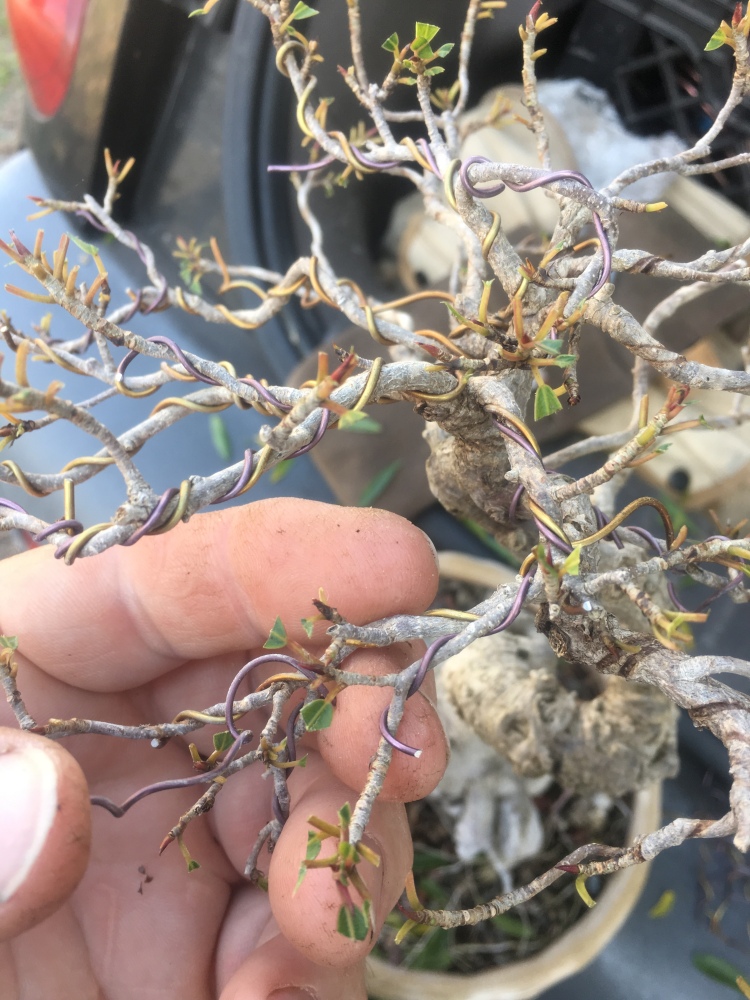 There’s at least a kilo, right? I’m an imperial guy and my brain thinks in pounds and ounces, but that could be a kilo. Right?

Well, if you scroll up and down, and compare with wire and without, there’s a little upward movement. But I’ll wait until a month or so to rewire.

I’ll just let it grow out for now. I should add a bit of fertilizer as well. 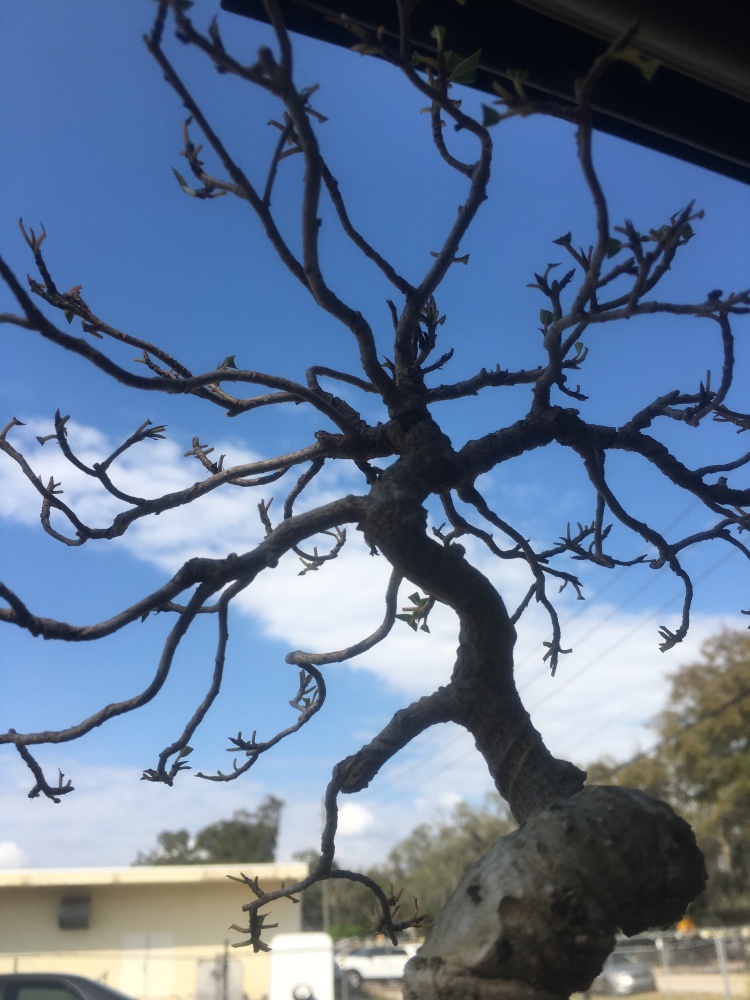 The next tree is another willow leaf ficus. It once belonged to my friend Juan , who passed away several years ago.

I showed it last August at the Komorebi show I co-hosted in Miami with my friend you met in the last post, David (the next Komorebi, K19, will be in October, and it will be a two day event, bigger, better, faster, stronger!) 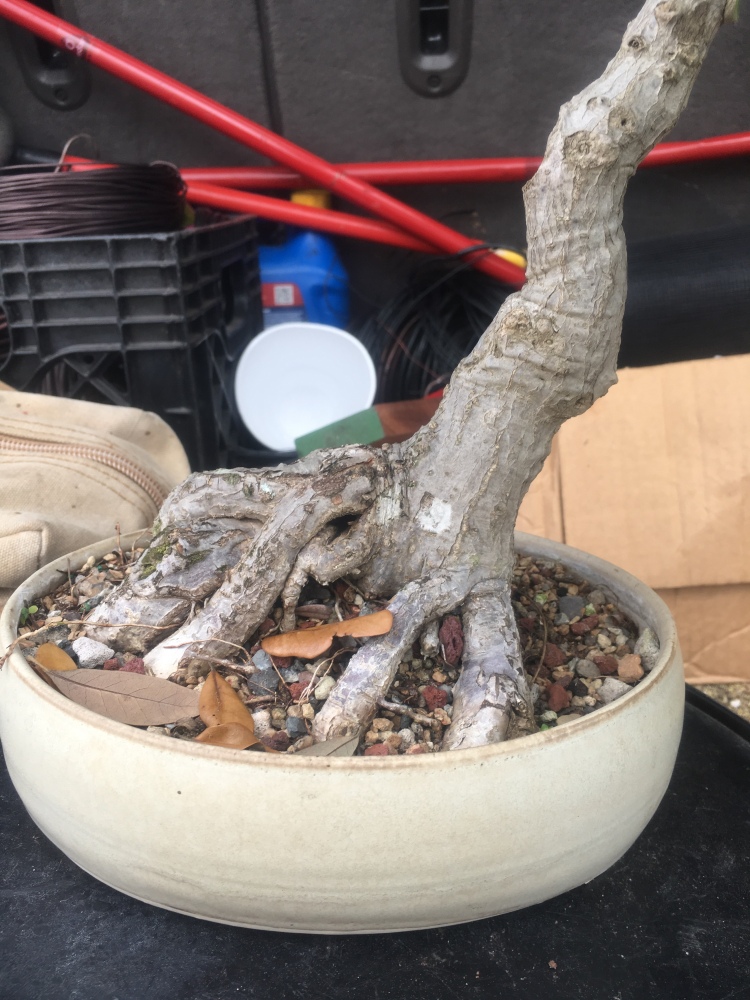 I unwired this tree in December, defoliating it in the process, so the leaves aren’t as old as the first trees leaves.

In this case, the tree is telling me to cut the grow tips off. The branches have elongated over the winter and could use some back-budding. 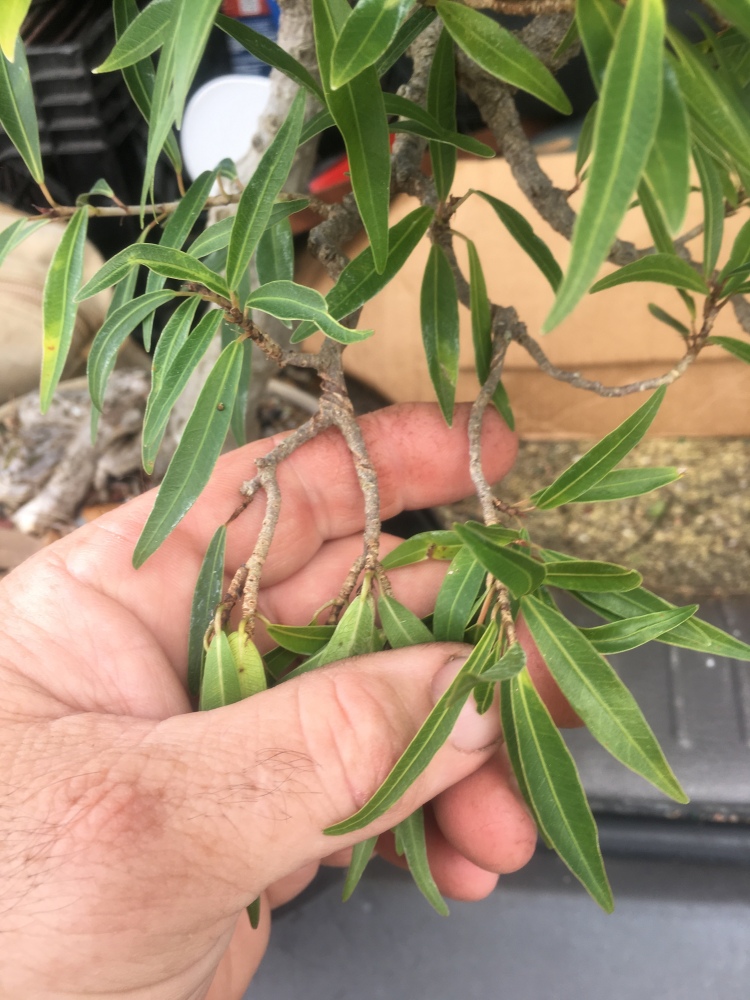 There are some older leaves but that’s ok, there are always older leaves. Just like on a pine or a juniper, if the foliage is damaged or yellow, get rid of it. They take energy instead of give energy from photosynthesis. 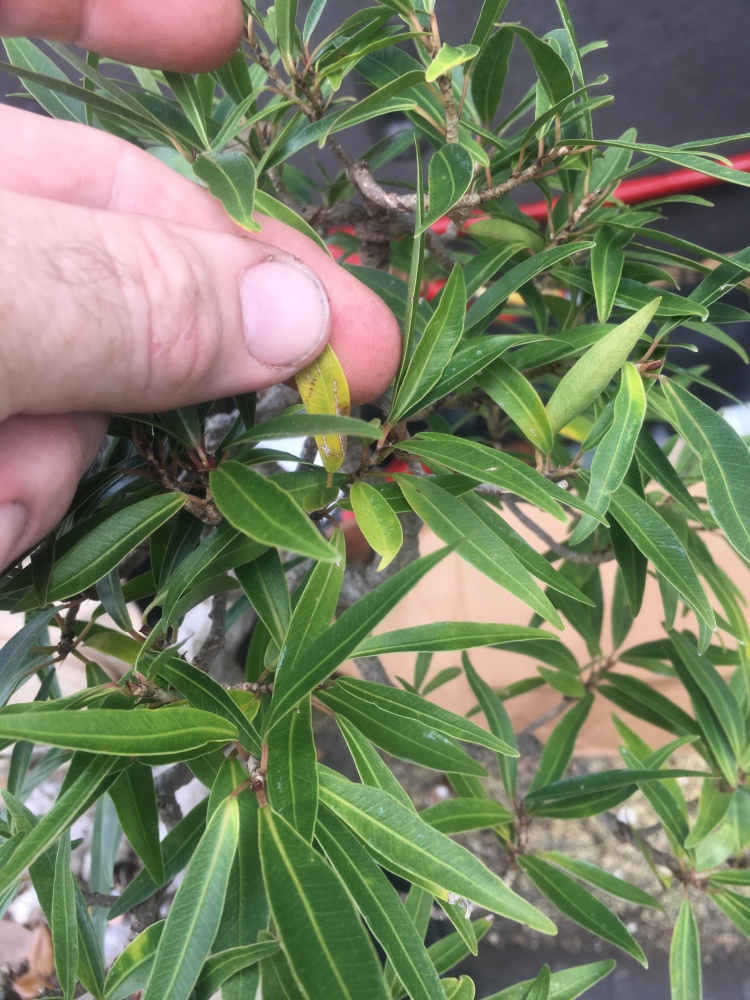 Out comes the scissor and…. 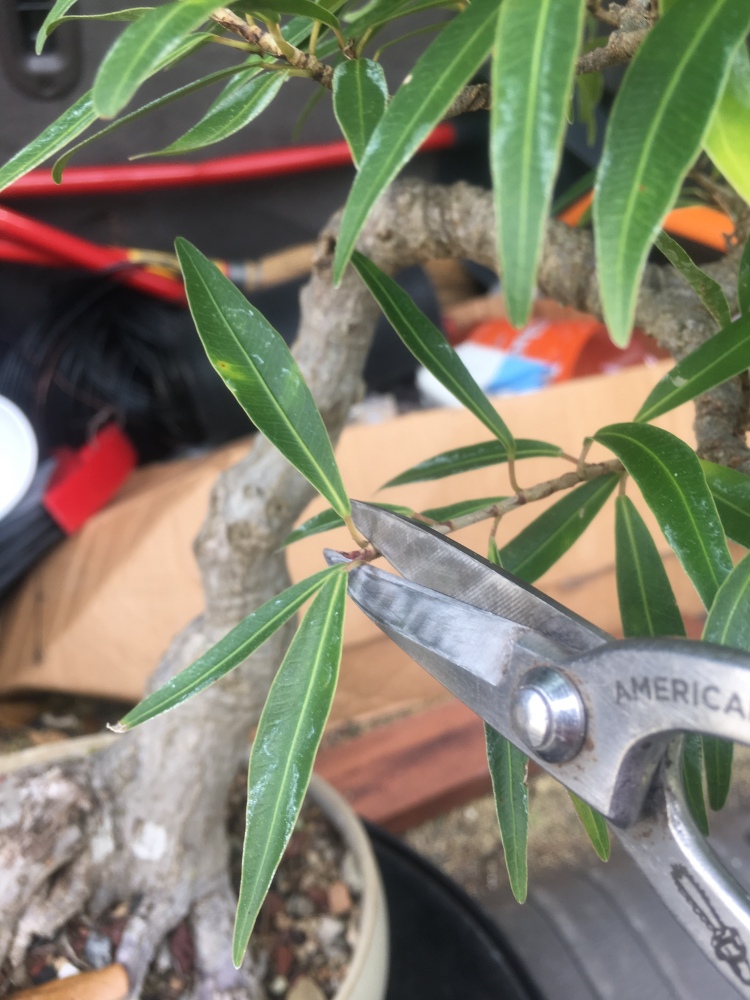 I’ll also remove any unnecessary budding to concentrate the hormones and, therefore, the sugars, which will help with the back-budding. If we leave a grow tip intact, the auxin (the main growth hormone) will suck the energy to it. Auxin collects in the grow tips and, by removing those tips, and the dominance of that auxin, it allows the cytokinins to do their job (which is to activate new buds). 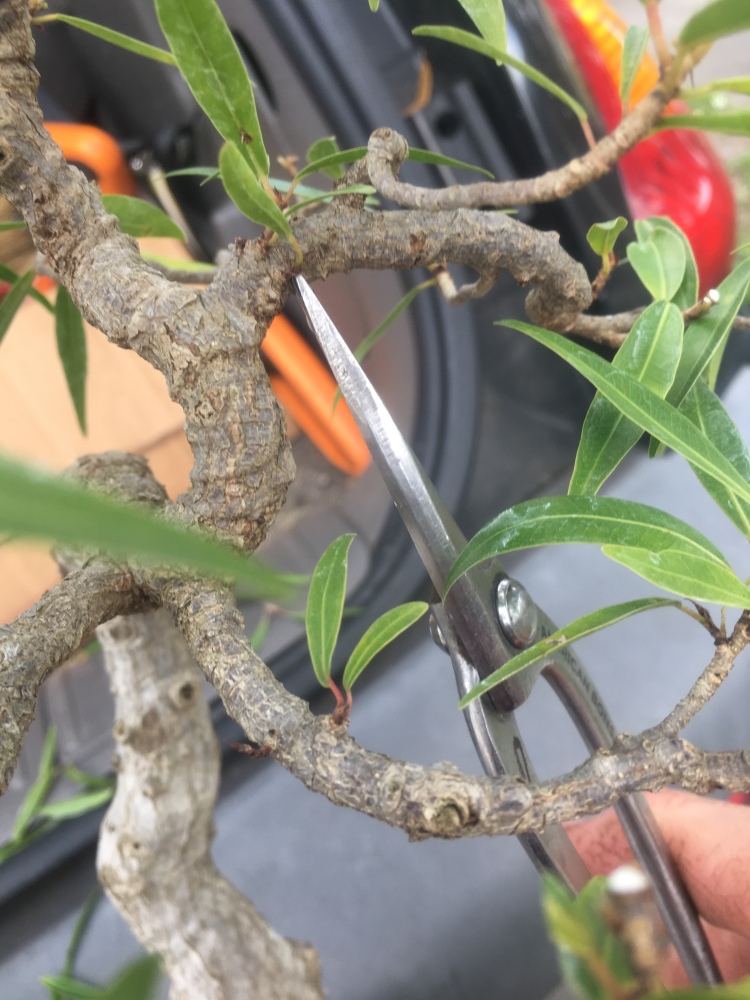 I know, too much science. If you do bonsai and you are a professional, you should be able to explain what happens when you do something. At least.

For most, just knowing that, by cutting the tips, you’ll get back budding, is enough.

This time, I’ll not defoliate. Just to satisfy some curiosity.

What will happen is, it’ll back bud, definitely, but (my guess) it may drop its leaves anyway. If it does this, I’ll know that I could have accelerated the growth by defoliating.

I won’t wire at this time either, just so as to keep all things equal (wiring can slow growth as it restricts and even stops sap flow). 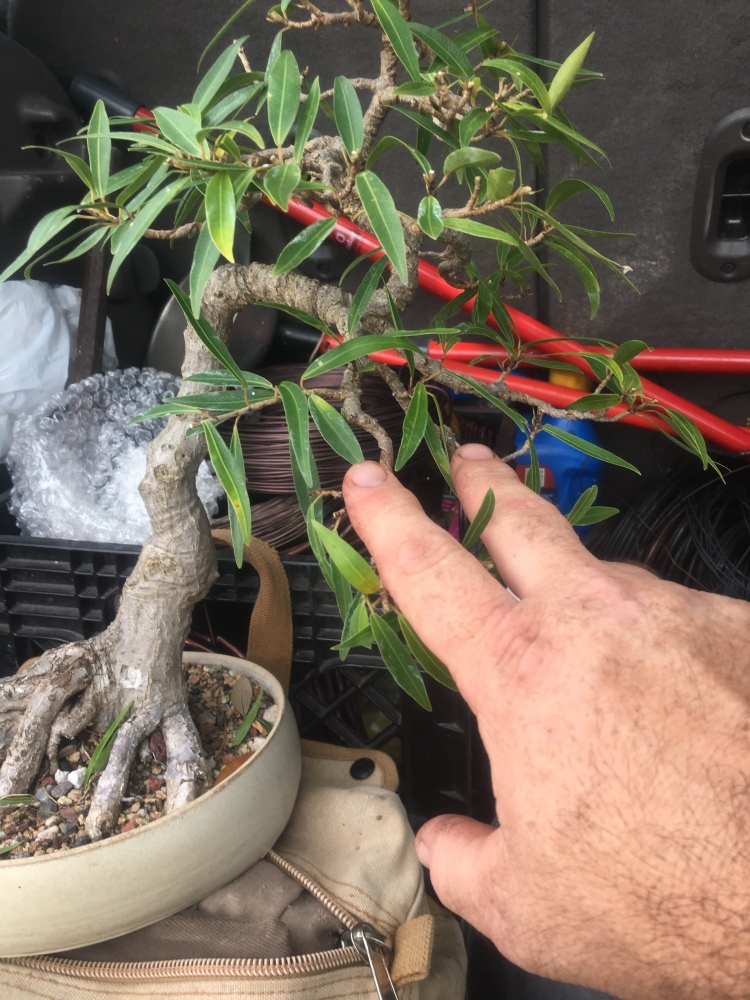 This next salicaria has dropped most of its leaves and put out a few new ones already. I may wire it out later. Not now though.

Below, that’s the new growth, that beautiful bronze leaf (FYI, that red coloring on most plants new growth is a chemical that keeps the new, tender leaf from getting sunburn. Cool, huh?)

Now the next tree has been un-wired (autumn), defoliated (winterish) and fertilized (about that same time) and it hasn’t stopped getting shaggy.

The leaves are new, bright, smallish. I had kept getting it ready for a blog post but I never did get around to it. It was going to be my “growing tropicals in the winter is a thing” blogpost series like the ones I did last winter on those green island ficus.

Maybe when I update the first three trees in a month, I’ll style it out and get it into a decent bonsai pot. It has a hell of a nebari on it.

And that’s it for now.