One of my favorite trees. But, as is often the case in life, we tend to ignore those things we love the most.

The roots are overgrown. 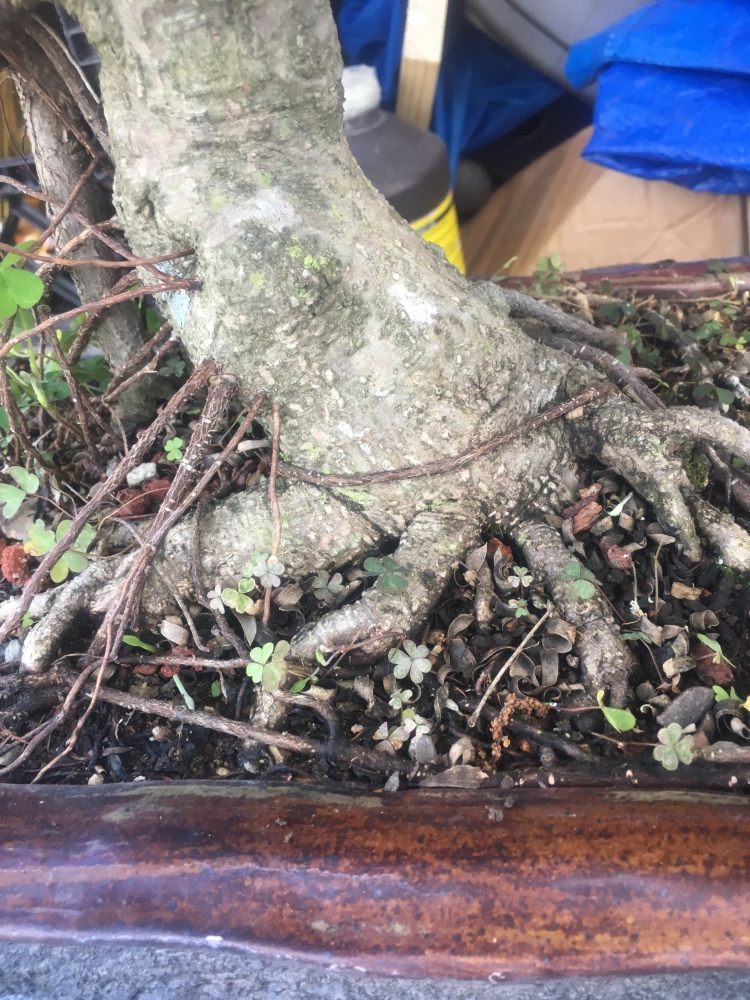 Ii is dressed it in some fantastic clothes though….or, well, in a fantastic bonsai pot, that is.

I’ll show you more of it in a bit, when I get to the repot.

Those roots are so gnarly, I swear it can get up and move by itself on the bench. 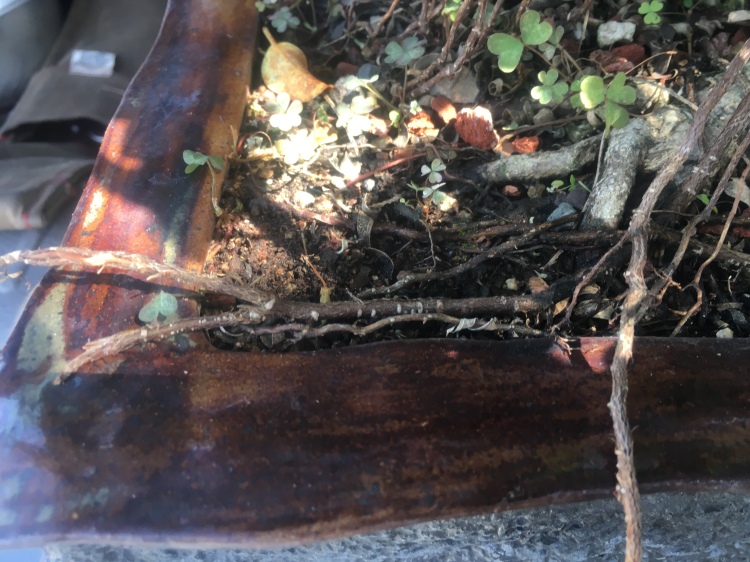 Here’s the establishing shot, as they say in the movies. The tree, glowing, all Komorebi style, in all its glory.

It looks good from afar, I know, but up close, you can see the real problem.

The scourge of ficus worldwide, the plague that makes nurserymen and greenhouse managers shudder with fear and trepidation……. 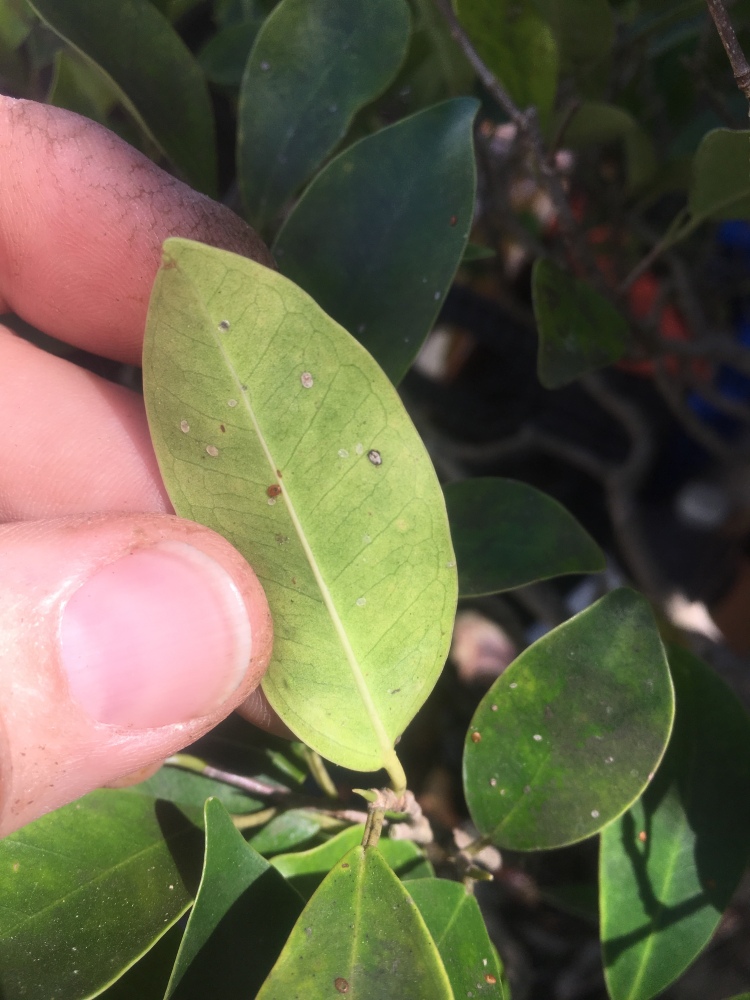 Squashed some under my thumb. Damn that’s satisfying.

That’s ok, what I’ll be doing next (the constant reader knows the drill) will take care of them, PDQ.

First, let’s get rid of the dead twigs. 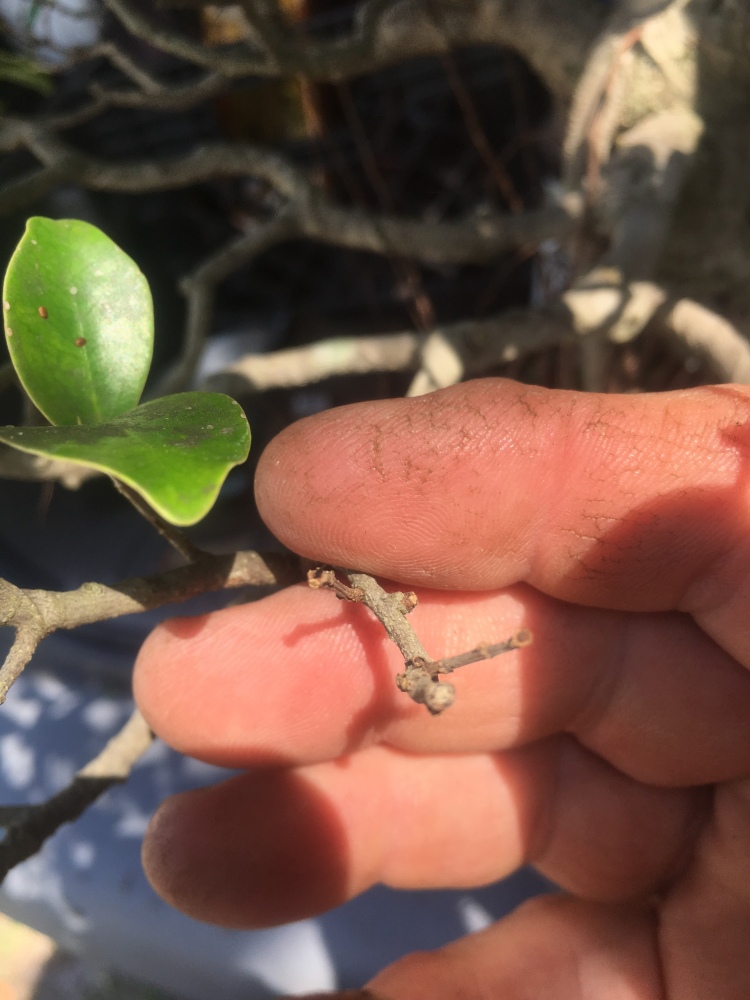 Of which there are a few. It’s an ironical occurrence but, the more we allow a ficus to grow, the more twig dieback we get. It’s almost as though the more work we perform on a ficus, the healthier it is. 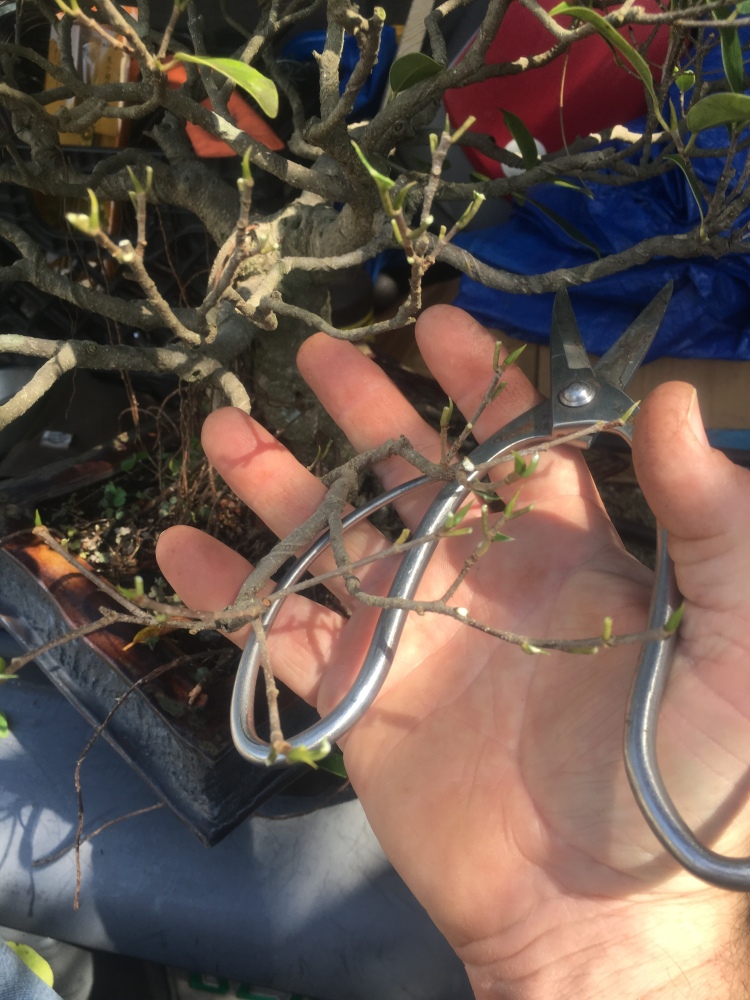 Maybe it’s just because I was ignoring it.

The tree needs to be defoliated, maybe a little wire.

I’ll leave some of the new leaves. 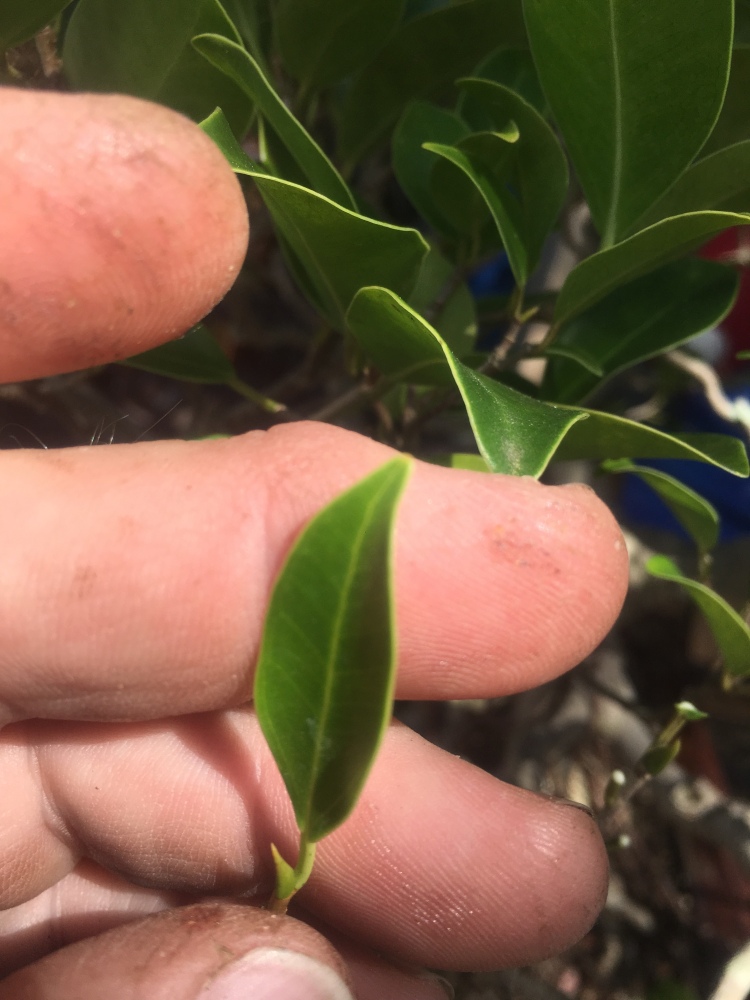 Why am I working on the tree now? Well, it’s telling me it’s time. First, the new leaves that have emerged above, and second, the new buds popping below. 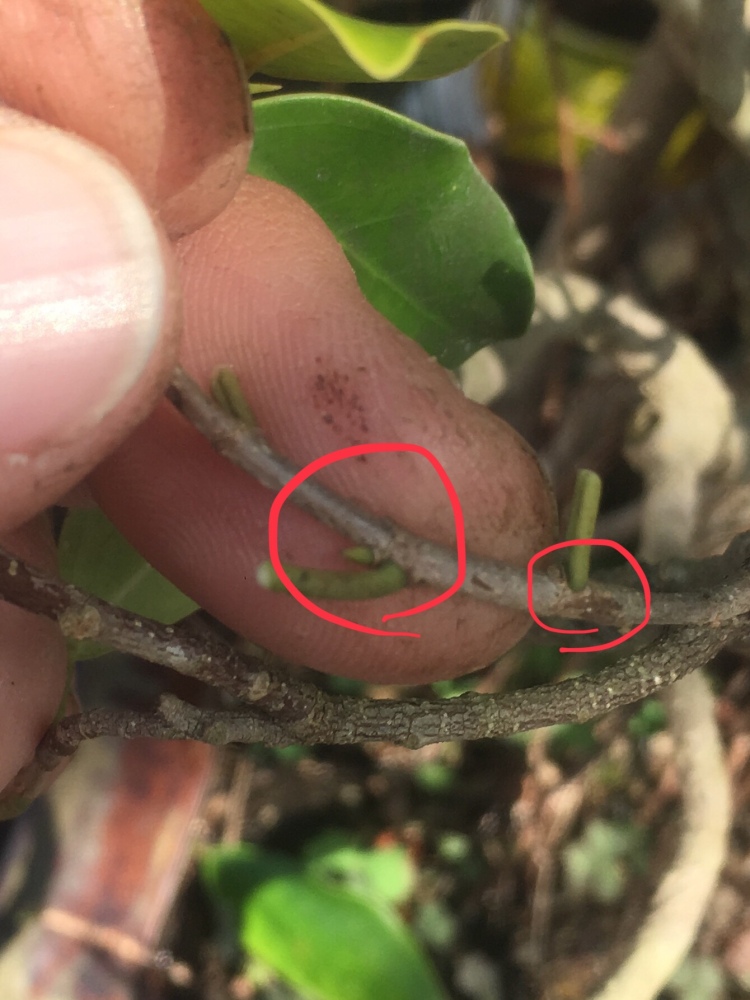 This is what I mean when I say you need to listen to what the trees are saying.

This shoot below is strong for some reason. Trying to analyze it, it faces west, where it gets afternoon sun until about 3-4-ish.

It’s in the back of the tree……some trees grow towards the light, some away from the light. I’m not sure why it grew so much more than any branch though. Maybe there was a tiny wormhole leaking fertilizer from an alternate but adjacent reality (where there was a more diligent and responsible Adam) onto the one root that fed this branch.

I’m not a physicist or mathematician, so I’m not so sure of how the math works there, but I do know the branch needs needs pruning.

After a thorough defoliating session.

This is a ficus microcarpa…just the plain Jane old microcarpa. I think I’ve done well with the ramification, on a difficult to ramify species.

Needs wire and a repot but the kids are here, time to go home.

I posted this pic on the social mediums. It’s the back of the tree actually. 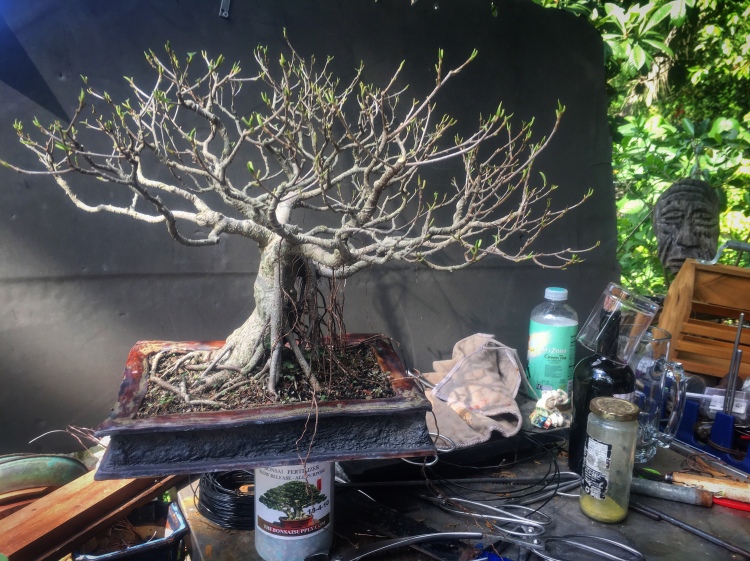 Repot, for the win!

I have my implements on hand, two types of root cutters. Let’s see how hard it is to…..

Damn…..that was easy. I was expecting a fight.

This vessel has an inner lip that makes it hard to pull out, sometimes……

I talk a lot about organizing roots, and combing them out radially.

Especially for ficus, but you should do this on every tree. 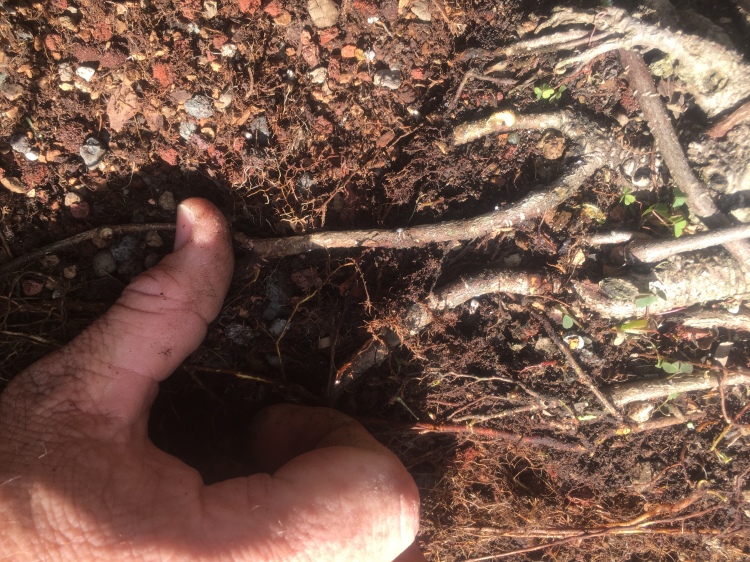 Not only is it more aesthetically pleasing, but giving the roots an ordered way to grow, they’ll thicken and make for a mature root system, quicker. 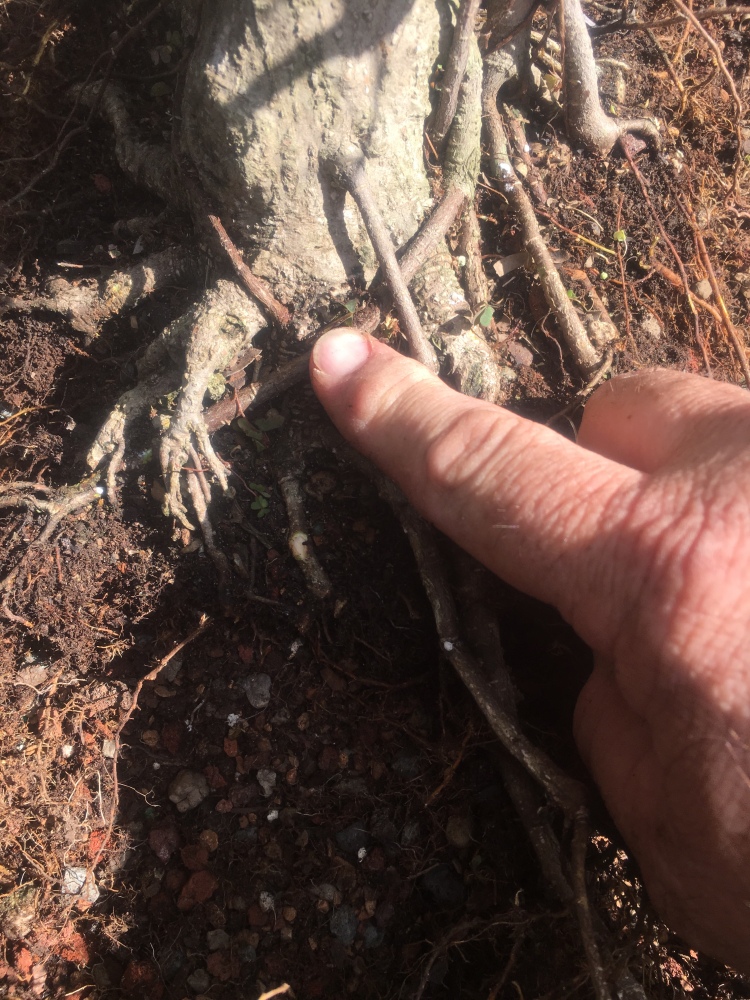 The “in” thing nowadays is to take a young tree and tack the roots onto a flat board, splayed out, and bury it. This technique makes a nebari (the surface roots), very quickly.

The tree has a few, but maybe just one more…. 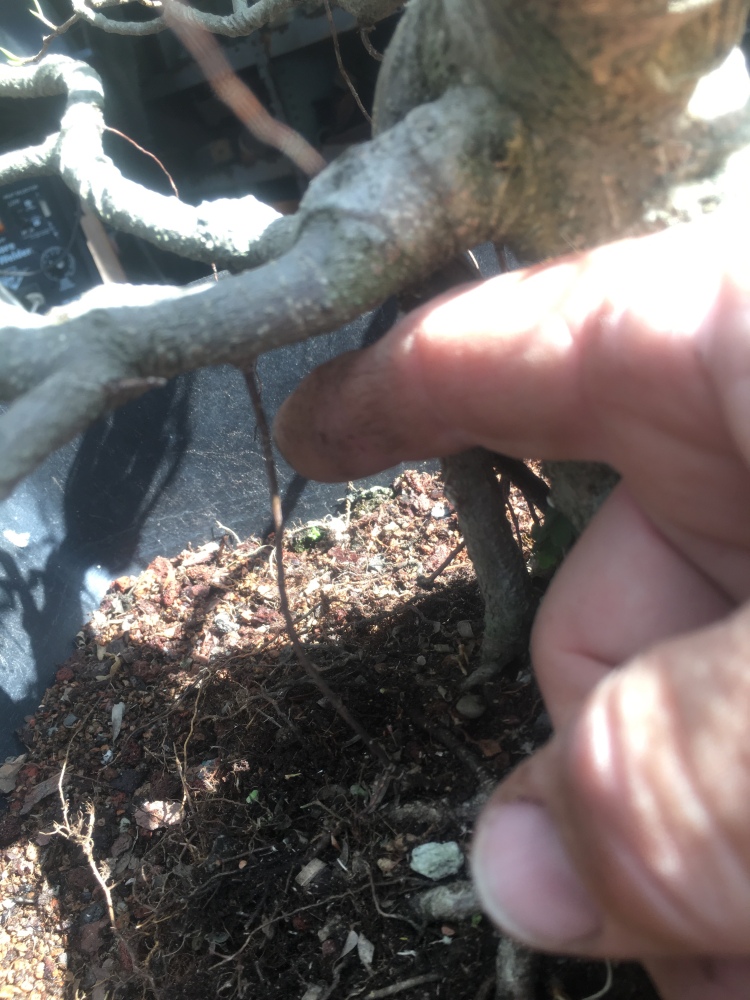 As for the roots at the base, you shorten the thicker ones. They’ll divide much the same as the branches. 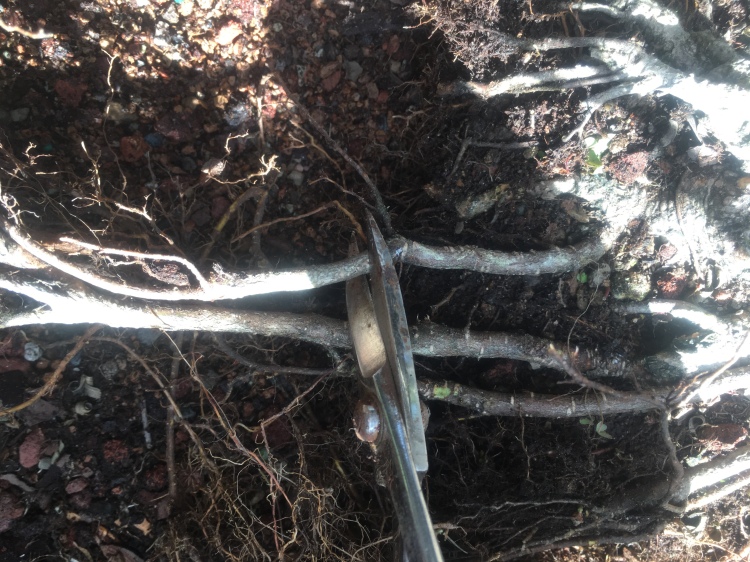 There we go, from chaos to order.

Now, for the pot. It is signed by the potter.

Unfortunately, Daniel doesn’t make pots, or even do bonsai, anymore. 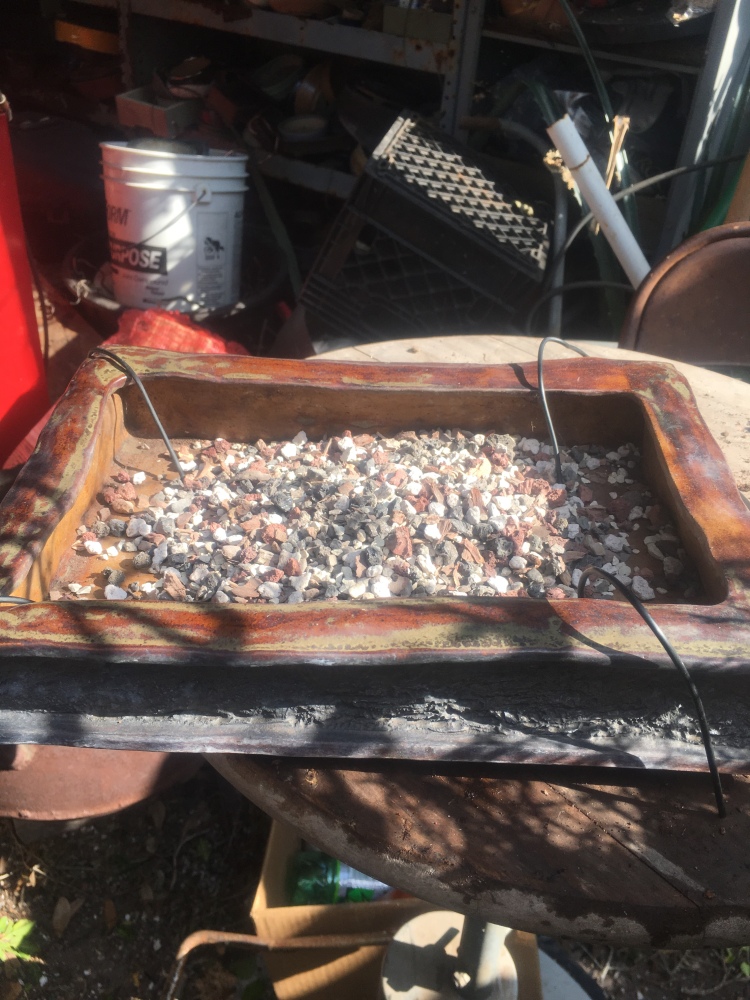 A good base of fresh soil…..place the tree and wiggle it down like they do in the Macarena, into the soil. 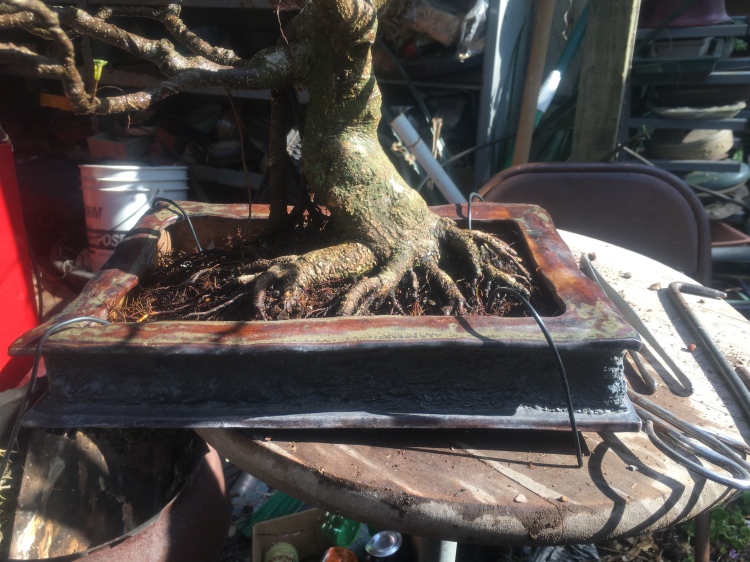 Backfill, add some granular fertilizer (this was given to me to try by Jerome and Mari at The Bonsai Supply).

But any good granular (slow release) will do. Like my daughter says all the time…”Fun Fact!”

-With fertilizing, it’s not so much what you use, but that you use something, that makes the difference….

You can use BioGold, Milorganite, Green Dream, Osmocote….whatever, just use it and, specifically, use it according to directions, especially with application rates and schedules (let’s retire the myth of the half-strength fertilizer application, once and for all)

I like to hide the granules below the soil surface. 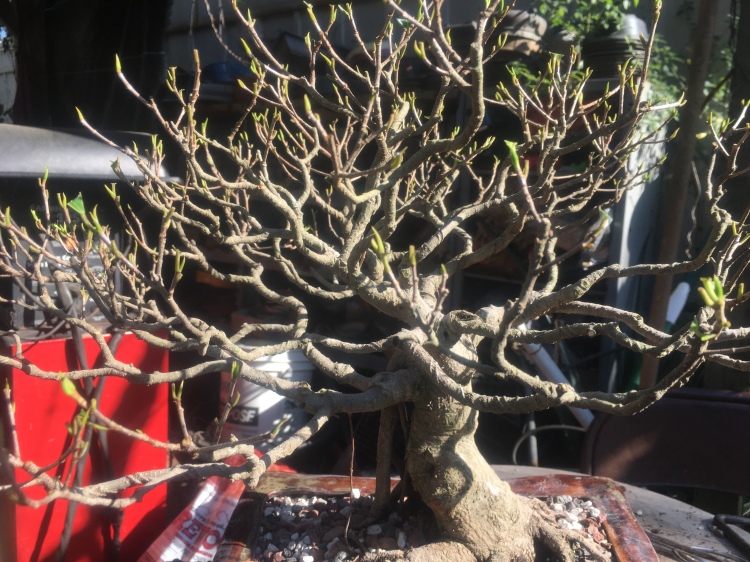 Not too much wire today. But some branches need to be moved. 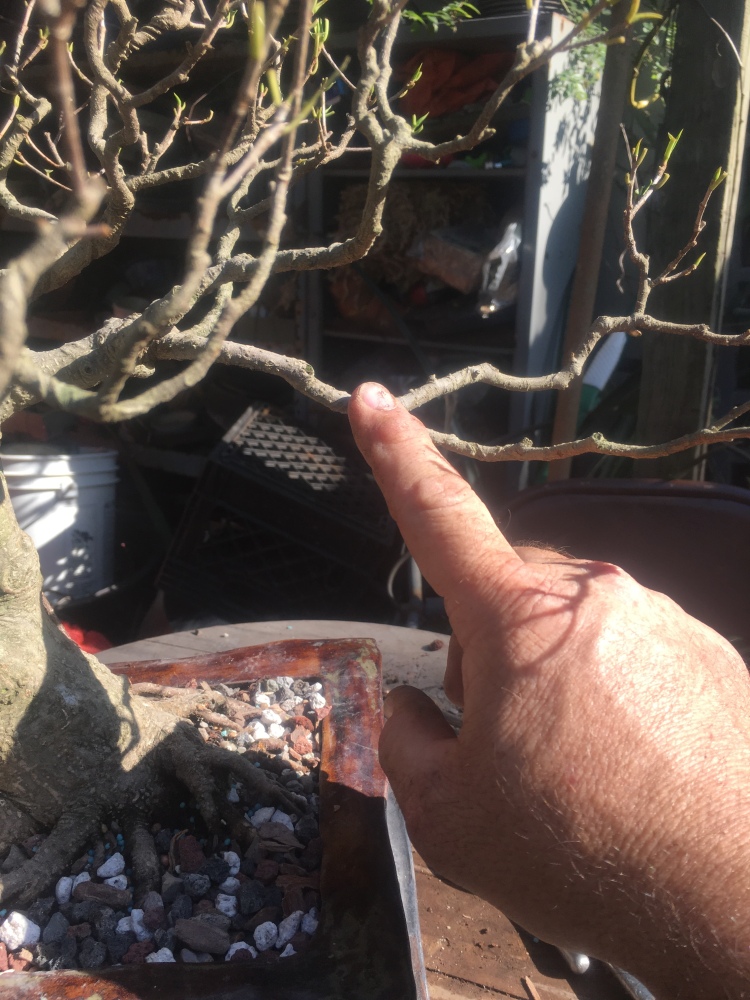 Or made to look old. Straight growth is young growth.

That’s ok, I do my best work in the dark.

The freaks come out at night, you know.

Very unusual for me. I’m a bourbon and beer kind of guy. 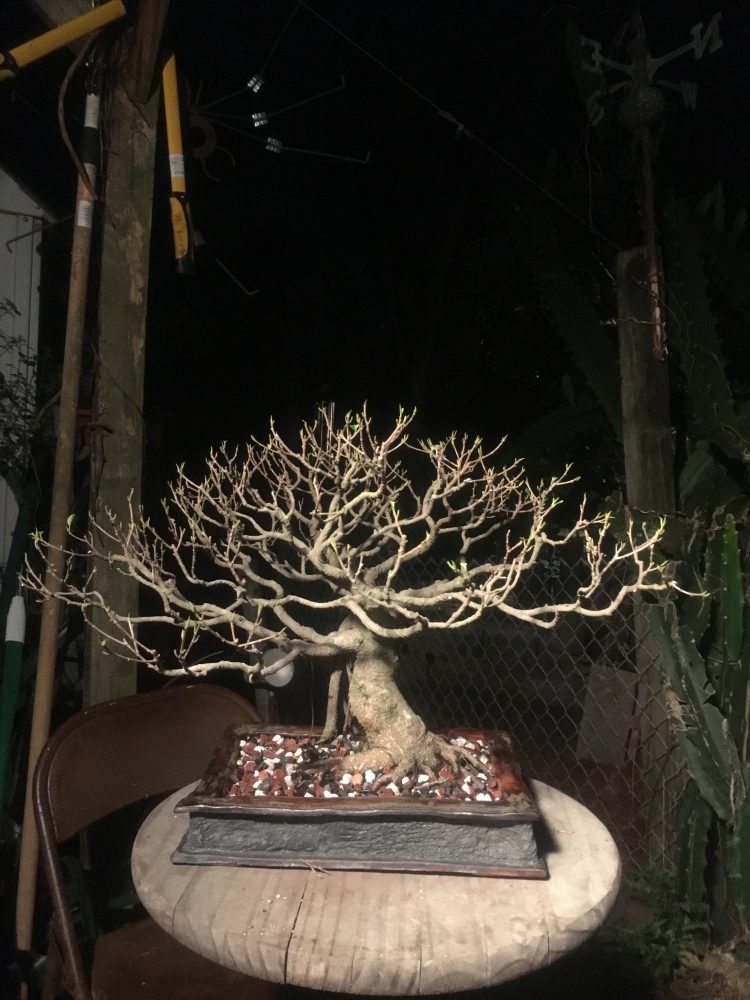 Here’s that branch from earlier with the straight growth….

And not just side to side but up and down. But just enough to blend in with the rest of the tree. 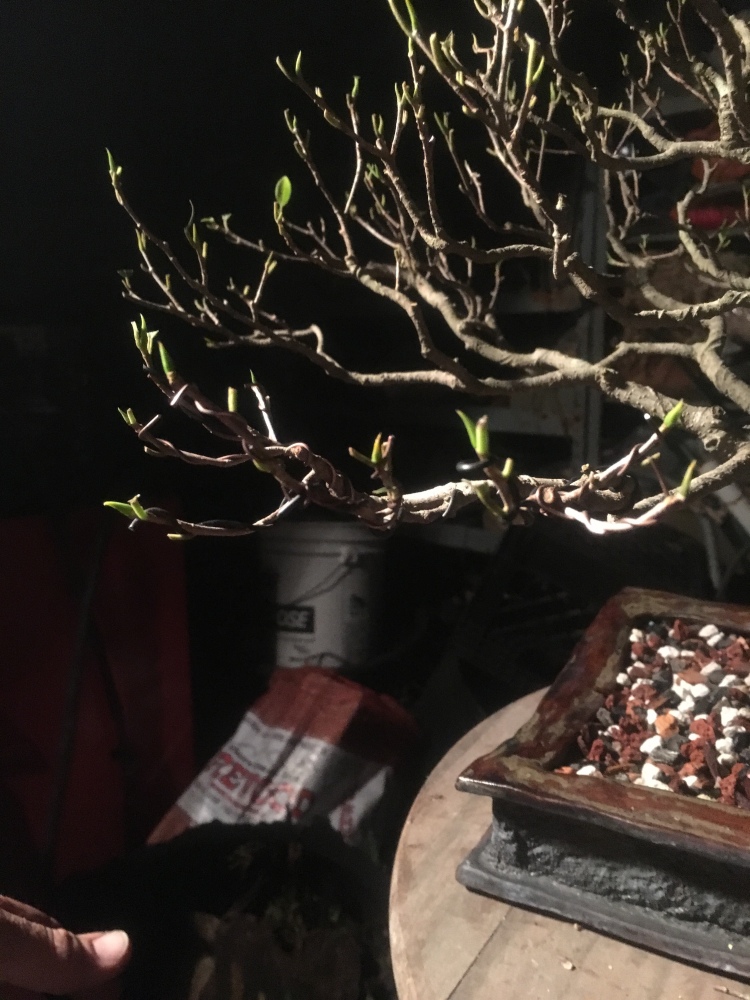 And now for the artsy fartsy moody shots. 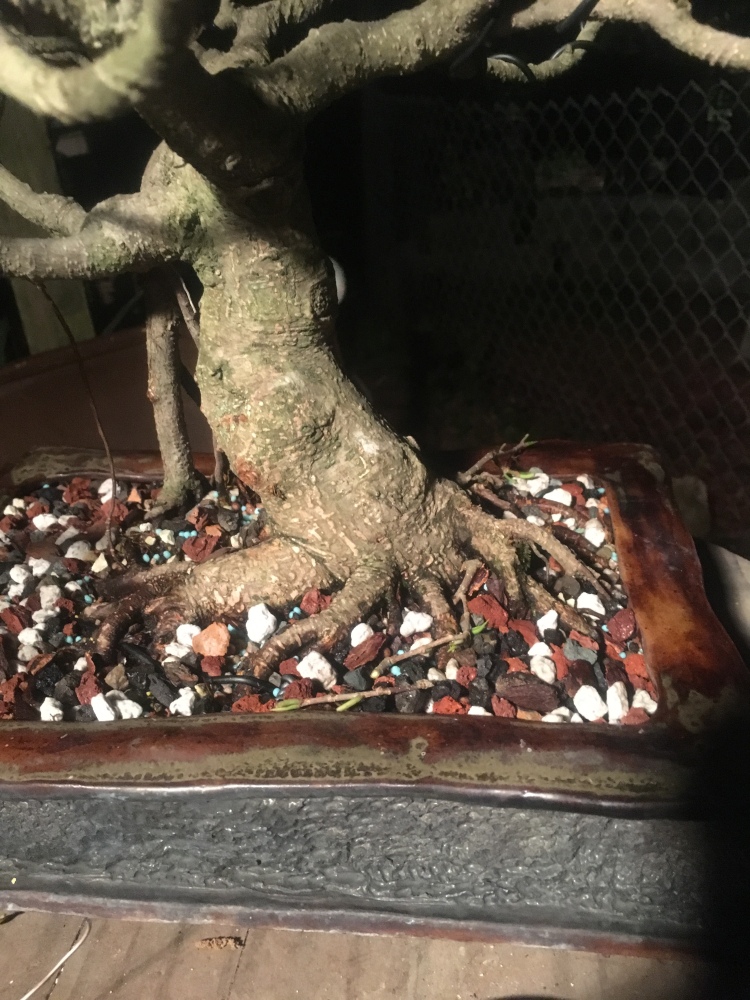 And, most importantly, the parting shot. 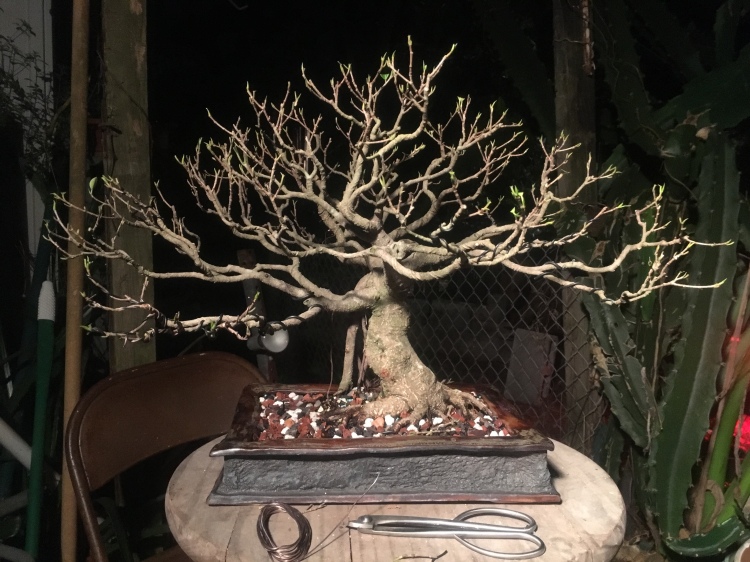 I call it a tropical broom. Tropical trees, unlike temperate ones, tend to be wider than they are tall. And a bit more stout and curvy.

I guess you could, maybe, call this the “whisk broom” style (or whisky broom style as it could seem like I’m a bit drunk…) but I like “tropical broom” better.