It’s been a long and winding road with this Brazilian raintree. It made its debut Here, in 2012. That’s like, 7 years man!

Another fantastic showing was Here , where it was planted it in its current pot.

If you read both of those (like, why didn’t you? Huh?) all the carving and concrete work I toiled on are going to be tossed aside, like a deuce in the night, for a new vision (yes my friends, it’s “deuce” not “douche”, in that old song). 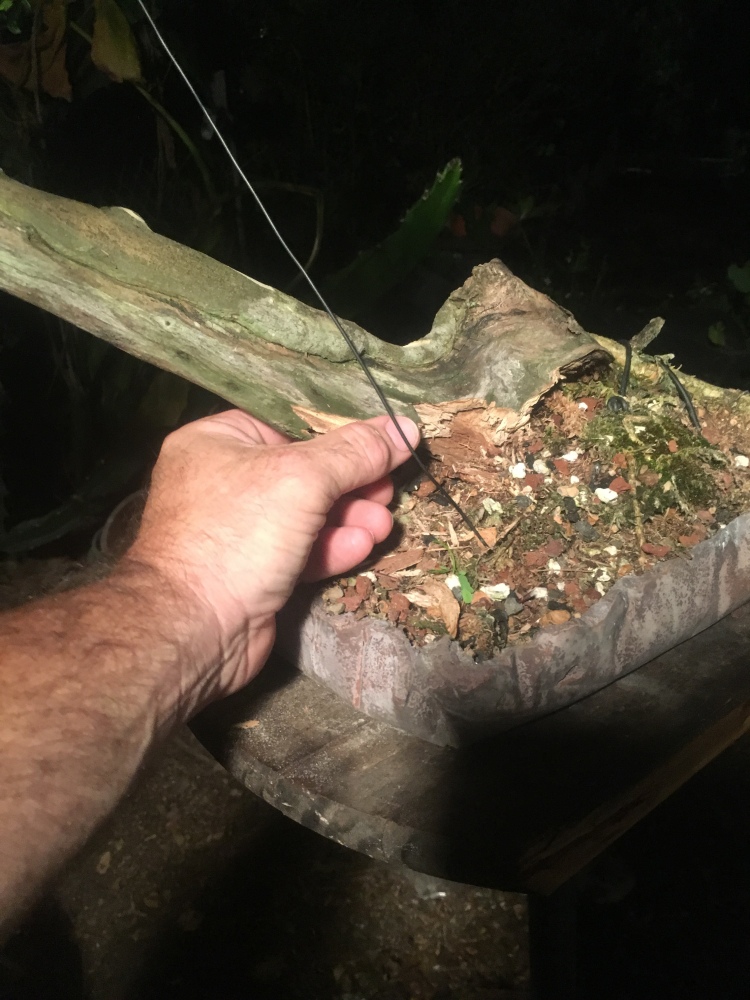 The carving at the top is still pretty much in good shape, but (and take note), as often happens, the deadwood at the base has rotted away. 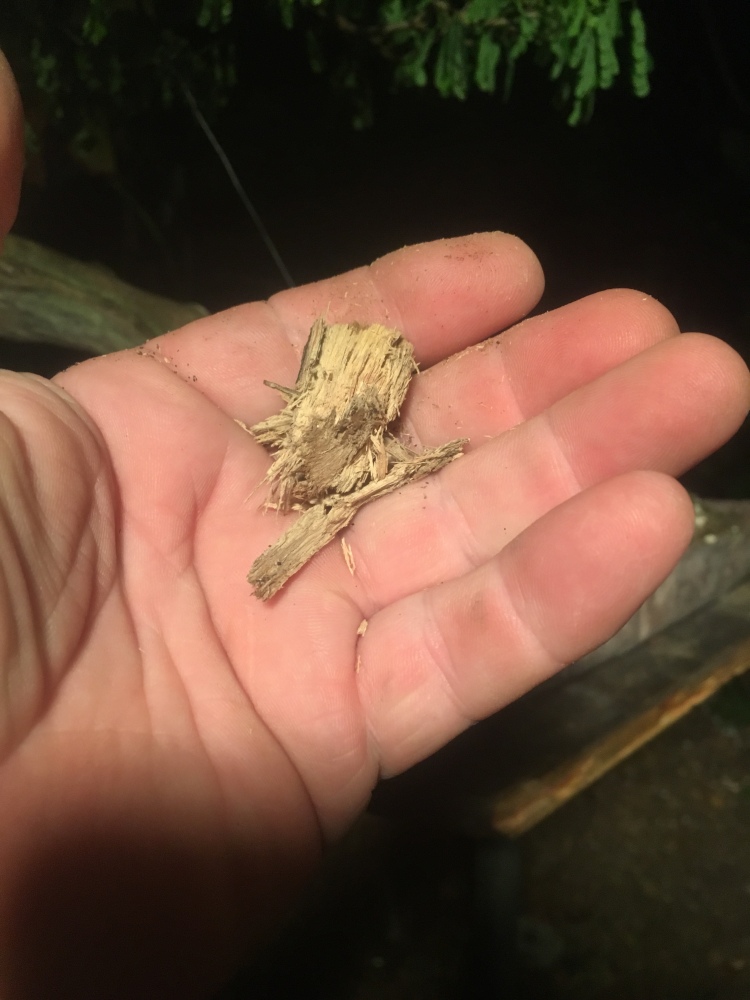 But I have achieved the goal of strengthening the live vein. In those previous posts (you haven’t read them yet?) on the tree, that vein was less than the width of my pinky.

(since I’m the only person in the world that uses my pinky as a unit of measurement, it’s about 3/4 of an inch wide, or 19 mm, for the metrically inclined. You all should adopt the Adamist system of measurements. It’s way more accurate. My system for liquid measurements is…..inspired….)

The first work tonight is on the deadwood; to get rid of all the soft deadwood and then do some rough shaping with a knob cutter.

As you see below, with the loss of all that mass at the base, we have a bit of obverse taper.

Ok, a lot of reverse taper.

So much inverse taper (see what I did there?) in fact it looks like a pencil rendering of El Ingenioso Hidalgo Don Quijote de la Mancha, tilting at a windmill.

Or one of those illustration and animations that Pink Floyd used in The Wall videos and movie (you youngsters should look that up. There’s some scary parallels in those images).

Now that that’s done, let’s turn to the pot. (you’ll notice the rock? I had to put it there to stabilize the trunk, but the roots have developed enough that it’s holding it up by itself)

Here’s the new pot. It’s a container made by Dave Lowman I picked up at an auction in Sarasota.

I really love his work, especially the crescent and amorphous shapes they’re the most natural in the country (his Website).

And, as has become common for these evening picture shoots, the obligatory blurry soil and root shot. 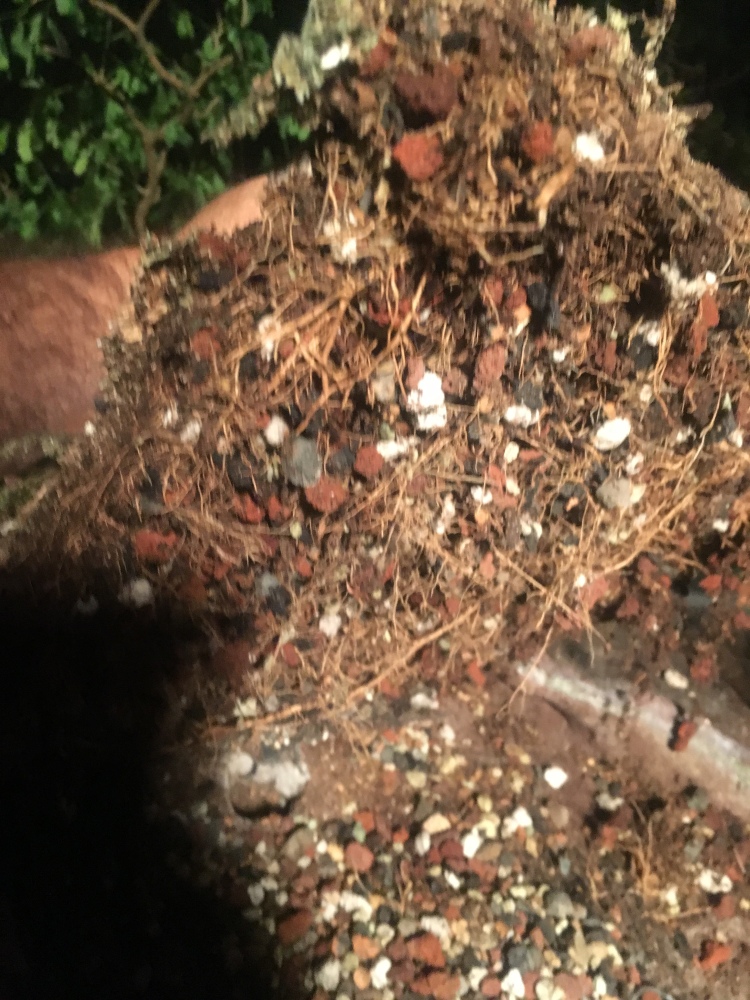 The stone is pretty well embedded in the roots. 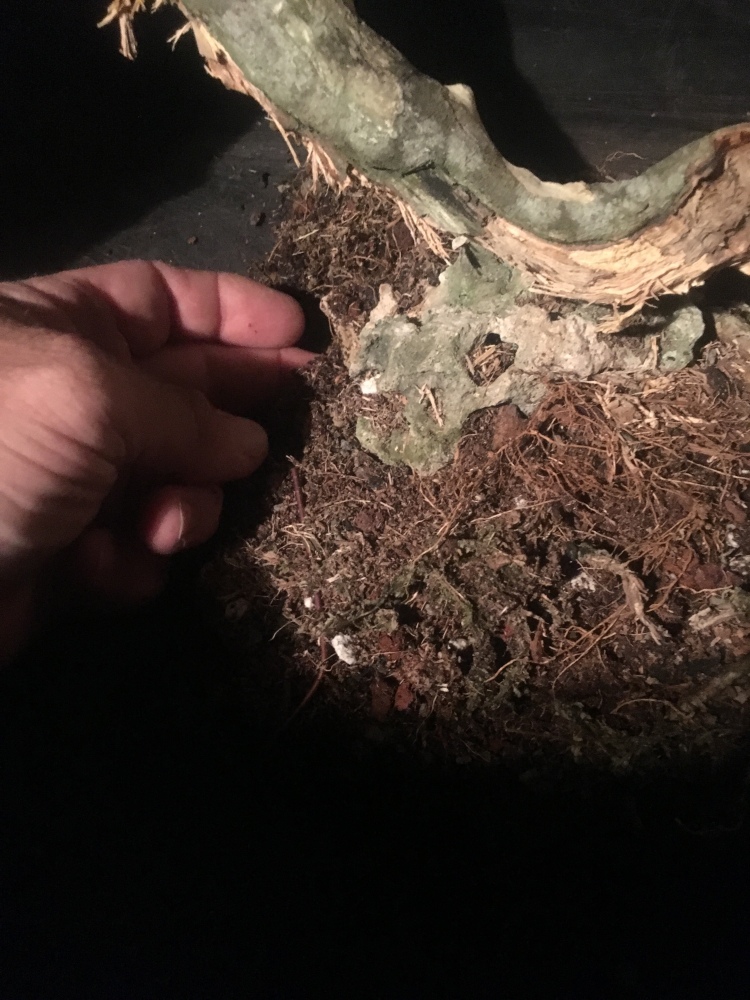 It’s the only naturally occurring rock in Florida, they call it “capstone”. It’s our bedrock and what our aquifer is made of (well, there’s the water of course, but there are caverns under Florida filled with water that crazy people cave dive. Not me. I once saw a program on an educational channel where a guy in a car followed the divers through a city with a tracker of some sort, as the divers explored the water filled caves. The divers eventually came up in a small sinkhole in an abandoned lot. Some of the passages required the divers to take their air tanks off to fit through. Scary).

The old container. Made by me, of concrete.

The color was achieved by mixing red and black powdered coloring.

I call the effect “sexual chocolate”.

or I call it that, at least until Eddie Murphy decides to sue me I guess. 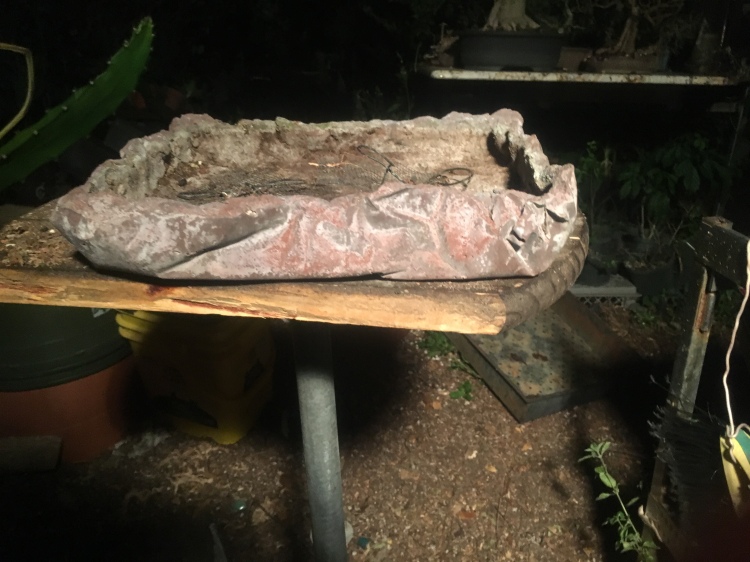 I loved the tree in it but a Raintree needs more room to grow roots.

The new planting angle. It is evolving and moving more and more to the side. But I like it. More drama and tension that way. 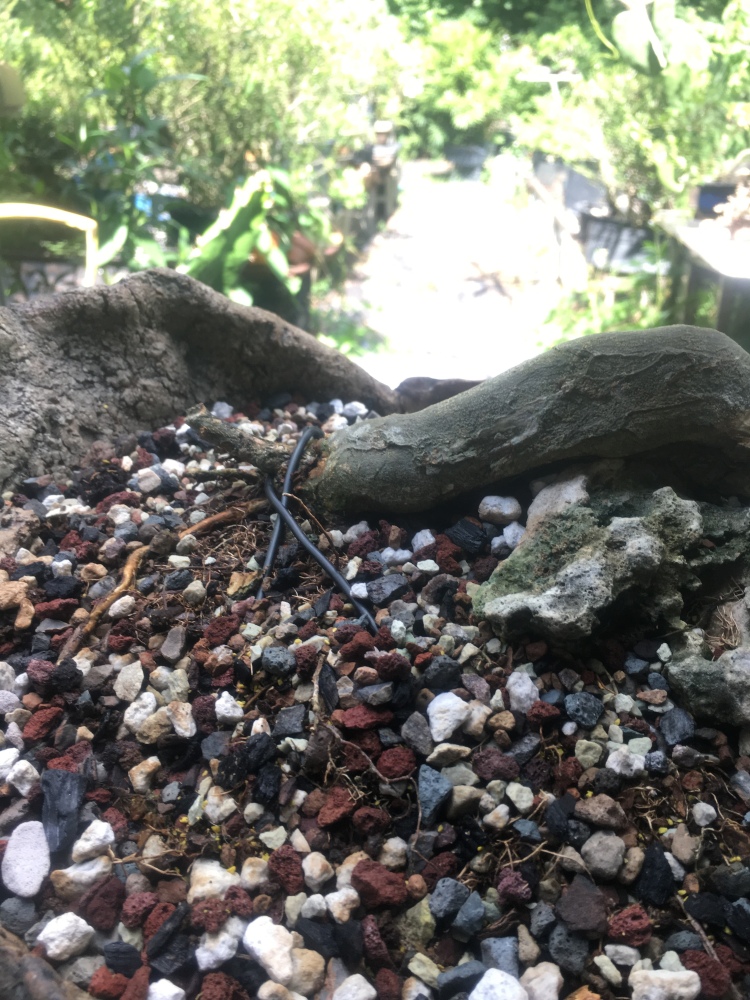 Some serious bondage to tie the tree down.

And the rock is back under the tree.

But I had to add a rock under the rock because the pot was so much deeper. 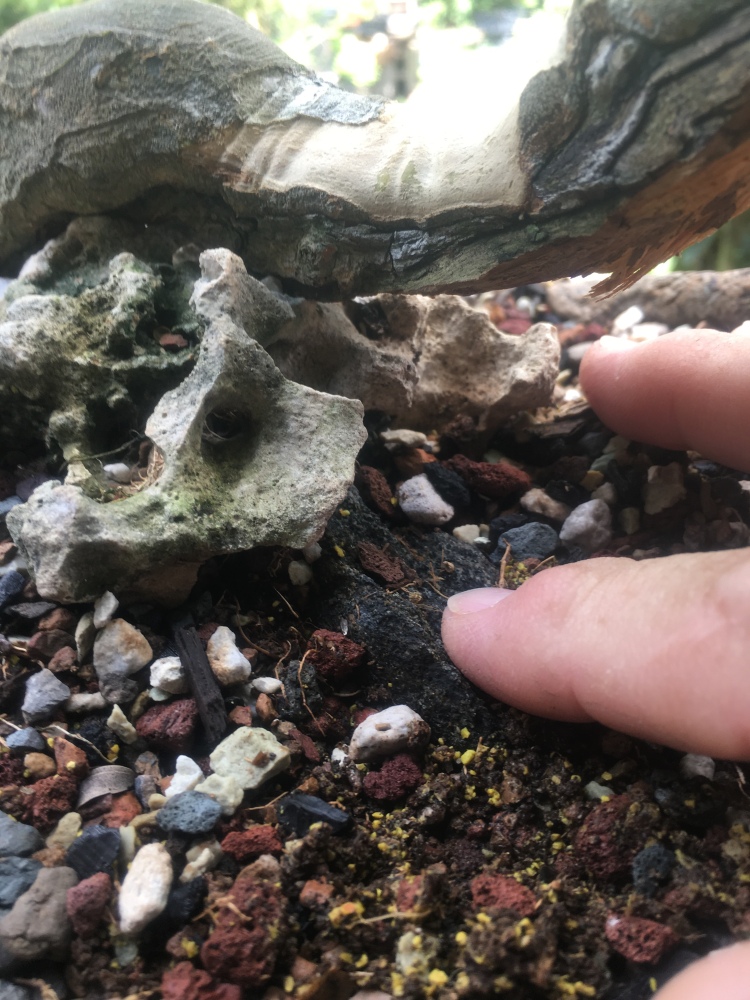 Time to tackle the top. 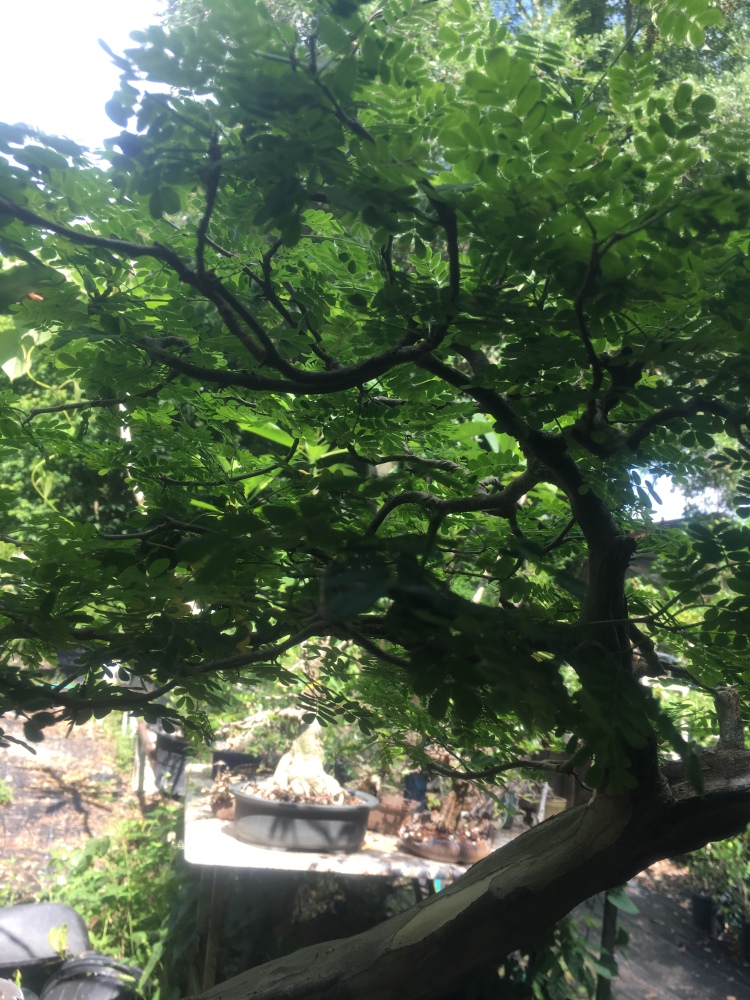 The effect of the light shining through the leaves is called, in Japanese, komorebi. That’s what me and my friend call our American bonsai show we hold every year in Miami. There will be more on that soon!

I just need to move some of the main branches down and adjust a few secondary ones.

First, defoliation nation! Maybe that’ll be be my next t-shirt design text……

Looking at the profile, I need to fix a little on the deadwood. 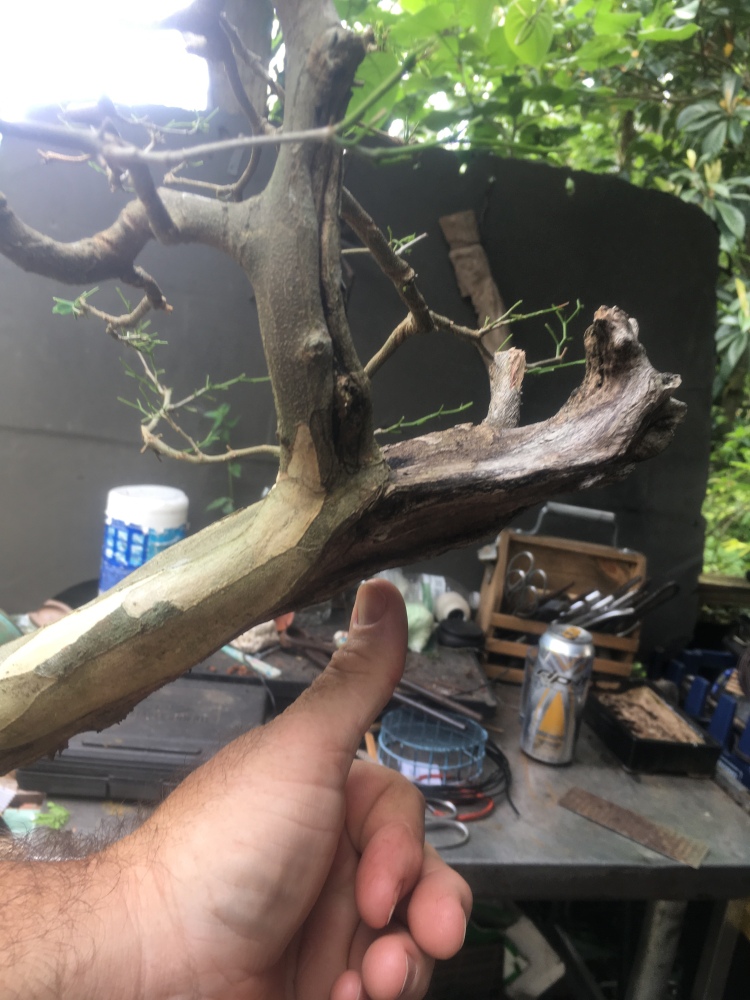 Using a knob cutter is a good way to rough out the main movement of the deadwood.

No power carving yet, except for this . 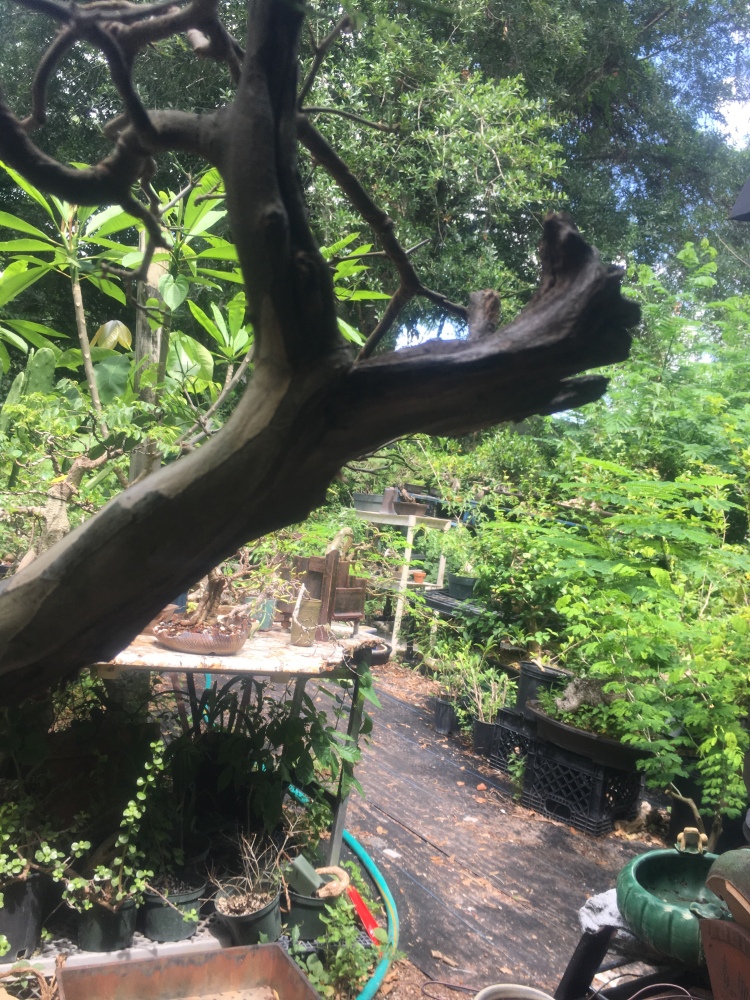 I’ve been hitting on this a lot in these recent posts, taper is important. Therefore, the main pruning this session will be towards that goal. 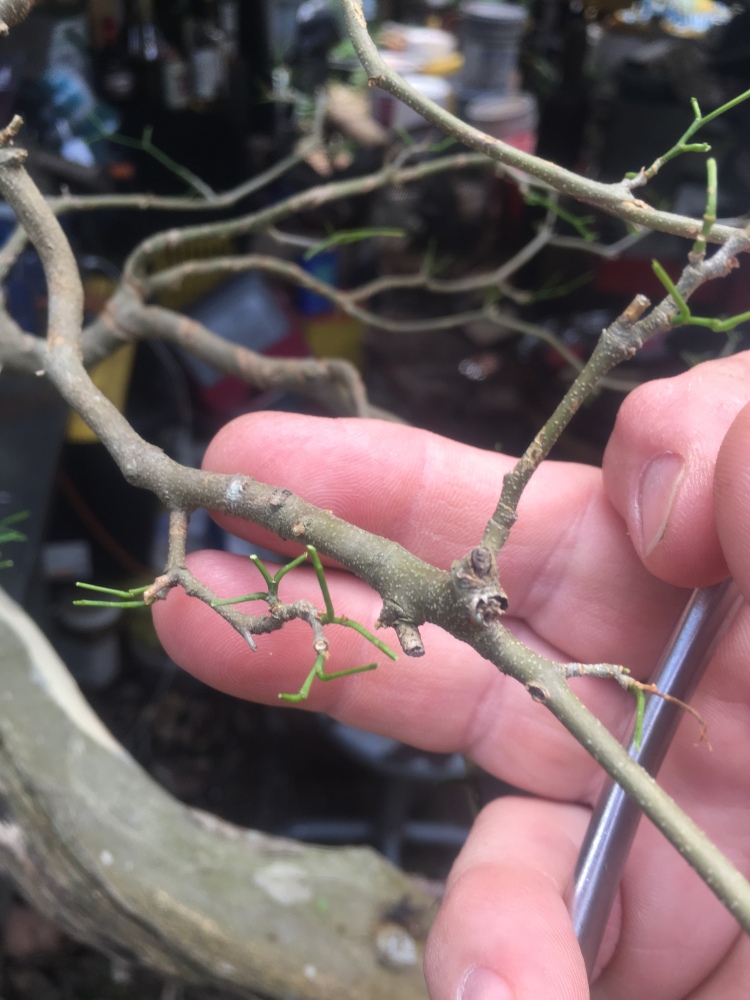 Taper! And movement too.

After going through the whole tree and cutting it back, the wire came out.

As I said, I didn’t need to do extensive wiring, just some of the bigger branches to reorient them.

I plan on doing a carving post later in the summer, maybe with an accompanying YouTube video.

In Florida, we have a slight summer dormancy in August and that’s a good time to carve. The roots aren’t growing then, so the shaking from the machine doesn’t break off fragile new roots.

If you look closely…..

I left some of the cut-off leaves on the soil surface. I’m experimenting with a concept I spoke about concerning the hormone xylene. It is a gas that’s given off by rotting plant matter (the leaves) and is one hormone that, among other things, stimulates root growth. (This is not a scientific study, but more of a trial. I have always maintained that there are scientist, and bonsai people. But there has never been a bonsai scientist. Anecdotes are not satisfactory data points for scientific studies. Sorry).

I’ll let you all know what happens and give an update on the footage situation when I carve the tree. Or I’ll completely forget about it, which is pretty normal for me.

Next up, is a buttonwood, stay tuned!