Here’s an interesting fact: I live in Florida, I have four studygroups where at least one buttonwood per day shows up to be worked on, they are native to the state and always win the Florida Native award at our convention, I love carving, wiring, and refining them, but…..I don’t own one in a bonsai pot. I have some in nursery cans, and training pots, but not a single one in training.

Needless to say, the subject of today’s blog, a buttonwood, belongs to my Monday morning client, Janice.

I’ve been going to her for about a year and a half, or so. If you follow my Instagram she is the owner of all those beautiful bougainvillea I post so often. This buttonwood (conocarpus erectus) is one of her favorite. She got it from the Buttonwood Queen herself, Mrs Mary Madison.

I can’t recall if I’ve blogged about it before, at least not in its own blogpost (I searched for it). But it’s time for it to be the Star now.

Here it is in February, 2018. It looks like I styled it once at this point. the bones were all there, with superior deadwood, good trunk flow. The branches just needed direction.

At the time of the pic, I don’t think it had been repotted at all. But in this post it will be its second repotting from me

The tree responded very well last year and even grew over the winter. I’ve been going against conventional dogma (dogma: /ˈdôɡmə/ noun, a set of principles laid down from up high by an authority that should be treated as the absolute truth and not to be questioned by Adam) and continuing the processes of fertilizing, pruning, etc., over the winter, and it shows. Most buttonwoods drop leaves, here in Florida, when they are “dormant” during the cold months (they are technically classified by the USDA and the US Forestry Dept. as a deciduous tree, as they can go leafless during winter, due to cold or drought)

But it’s not even dropping leaves now, after the first flush of growth.

….and no pests that I can see. We’ve been plagued by a bug called a “chili thrip” which has been going through populations of landscape plants like Schefflera and Indian hawthorn (it was named in the greenhouse trade in chili pepper culture, hence the nomenclature) but has begun its cross species trek into buttonwood. In the wild, there’s a check on them from other predatory bugs, but the overuse of broad spectrum and systemic insecticides in ornamental plant management has many unintended consequences.

Such as: on bougainvillea, we get a small caterpillar called a “looper” that resembles an inch worm. It eats the leaves voraciously. Many people are using the neonic insecticide, imidacloprid, with brand names of Merit, Premise, etc, to control them. It does kill them, as it’s a has a systemic mode of action, meaning the plant absorbs the insecticide and it becomes present in the plants tissues. This mean that, when a bug ingests a plant leaf, it kills the bug. Neat.

Unfortunately, the insecticide also kills predatory bugs that live on a bougie, who, in turn, keep a nasty spider mite in check, of which said spider mite sucks the juices of the flower, causing a weirdly crinkled bloom (well, not really the flower, Bougies have bracts, which are modified leaves, that’s another lesson). To keep everyone happy, except the caterpillar, use instead an insecticide called BT, which targets just the caterpillar. (It’s not really an insecticide but a bacteria called Bacillus thuringiensis, you can get a powder and mix it or a pre mixed spray. Non toxic, safe for everything except caterpillar type bugs)

Anyhow. Back to the buttonwood. 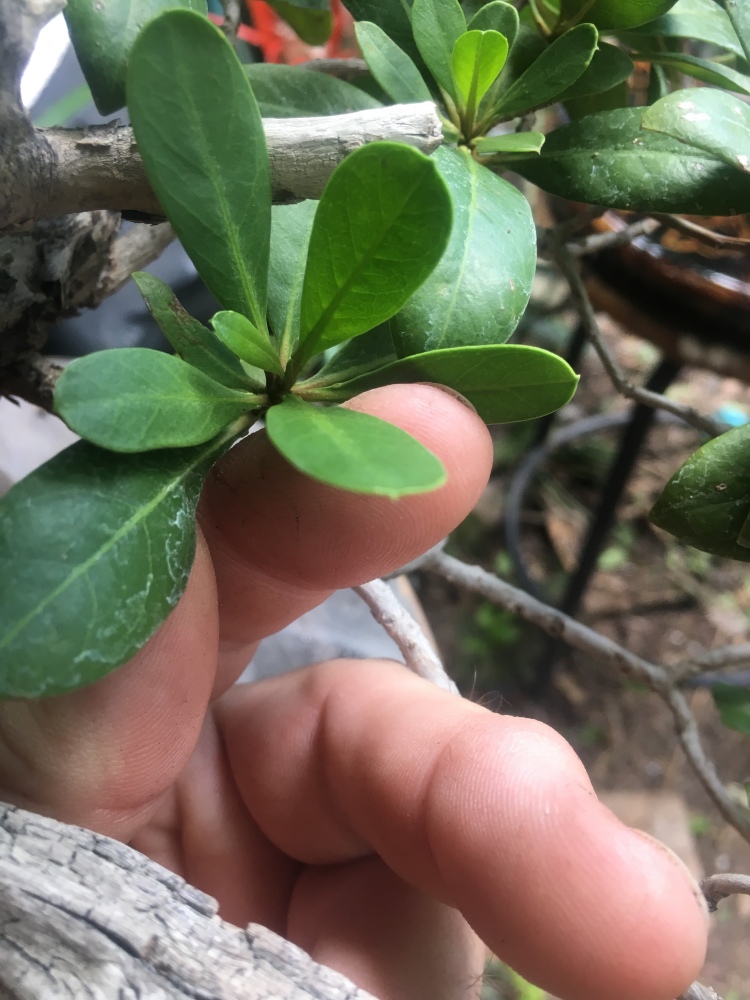 This is a large leaf from one of my stock trees. 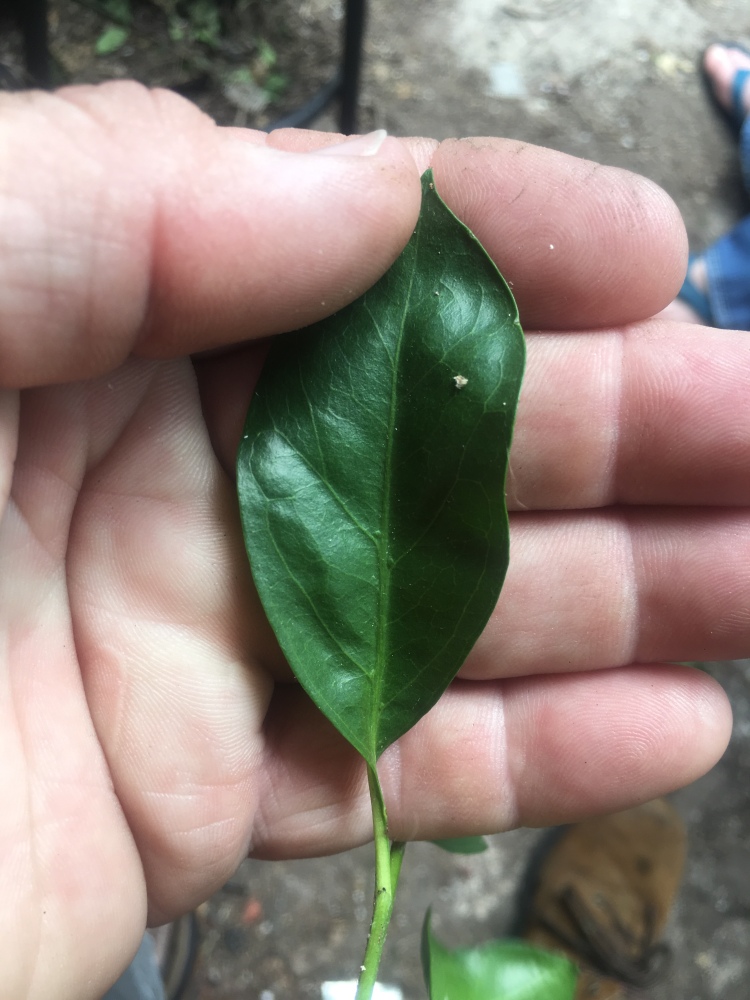 People are always asking about how to get small leaves on a buttonwood (and any tree, really). Well now, I’m here to help!

The best way to get small leaves on any tree is to….ready for it? Do you have your pen and paper in hand?

The best way is to….not worry about it. Your first inperitive is building the branch. Thickness, taper, movement, and then ramification. That means more secondary, and tertiary branches. And through making more branches, you’ll get more leaves. More leaves mean….ready?

A tree is like a small (or big) solar energy collection machine. But it only needs just so many square inches of the photovoltaic material we call “the leaf” in order to survive. A tree with few branches will have big leaves. When we cut the grow tips or defoliate a tree, the hormones throw the tree into gear to grow as many leaves as it can. But, here’s why more branches mean smaller leaves, the tree will stop the leaf growth (generally) when that surface area is achieved

Basically, if a tree loses all its leaves, it will grow back twice as many, in response, but they’ll tend to grow back half as large.

What my goal is, at this pruning and maintenance session, is more branching. To do this, we cut will all the grow tips. 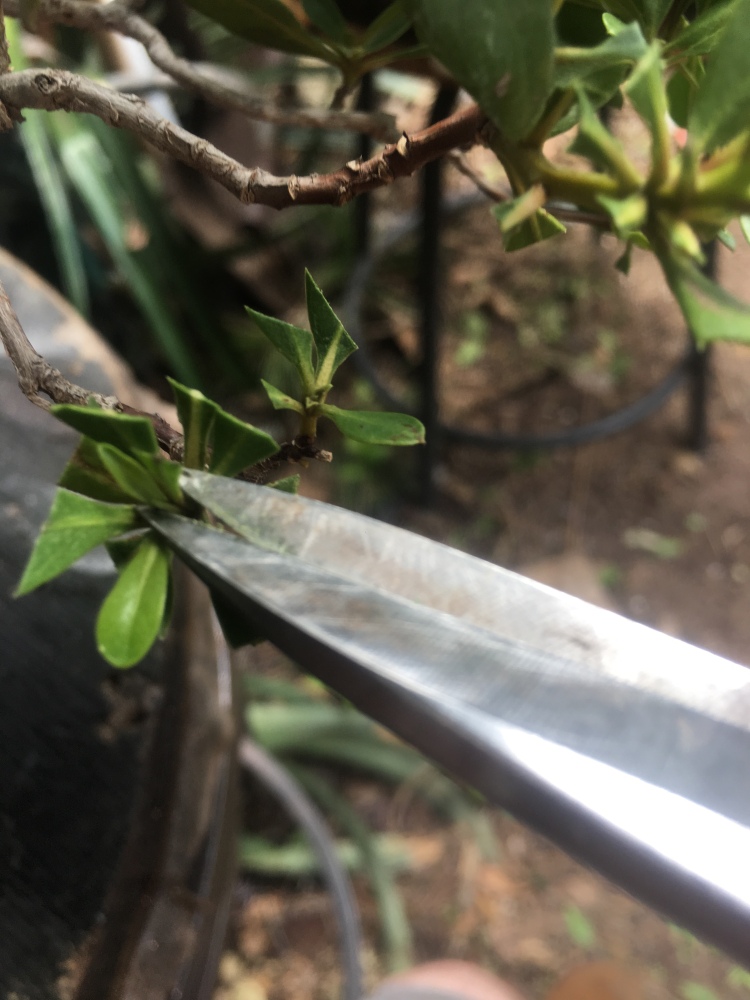 This removes the auxin at the tip, allowing the cytokinins to become dominant, which stimulates dormant buds to grow.

Hormones aren’t just for teenagers and elephants in must.

Aha! A flower spike. Called an “inflorescence” by the botanist, on the buttonwood, it’s the end of a grow tip. 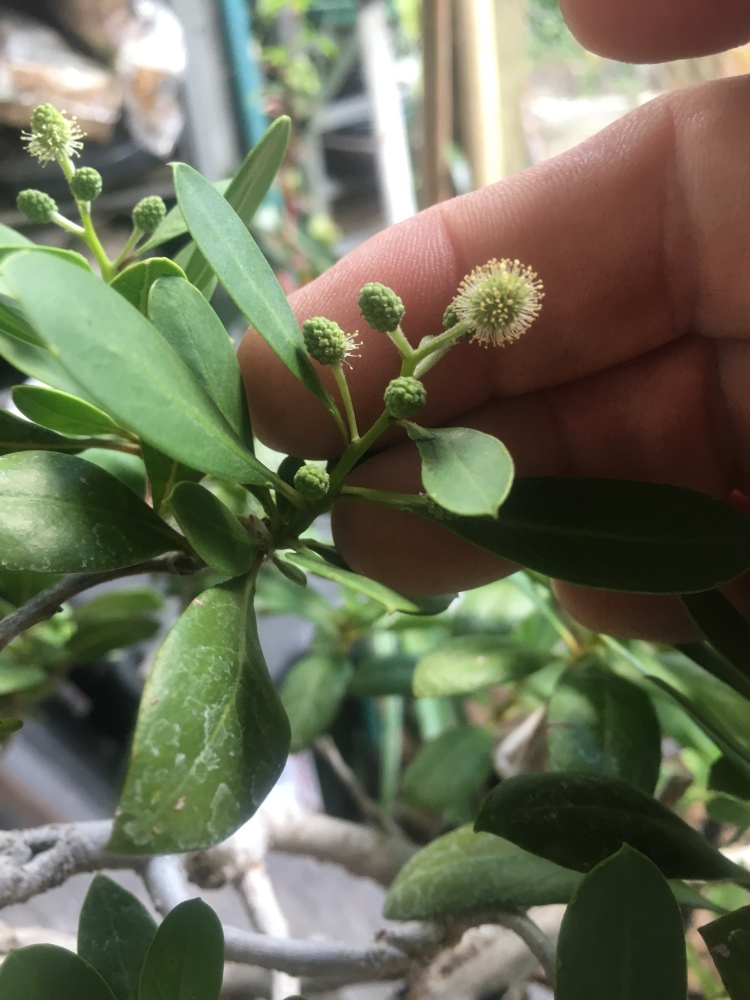 Which means that the branch won’t elongate as a single branch but as a fork. Flowering, amazingly, causes ramification. 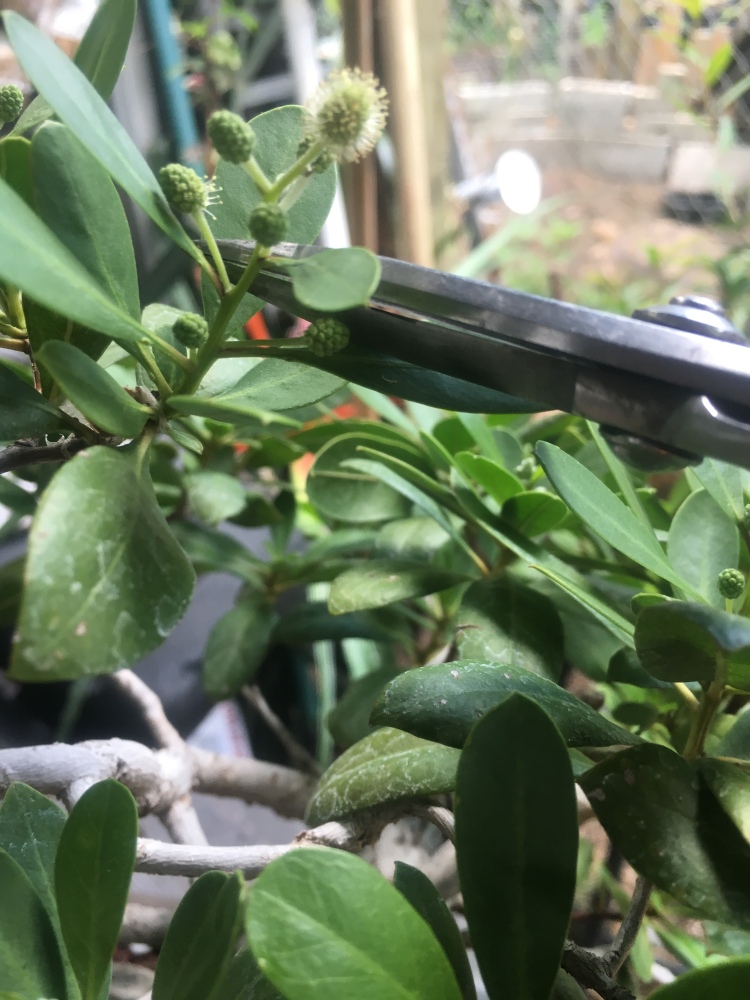 But, considering I’m working the tree (and repotting) I’m going to remove them so the tree doesn’t waste energy making more flowers and seeds.

I’ll still get more ramification, but even more quickly.

Let me speak to that “more quickly” line I just used. I’ve said this before, about taking a quick path in developing a tree, and there’s been pushback in the bonsai community about it. Especially from those I like to call “perpetual intermediates”. People who, on a forum, know all the rules, know all the jargon and specialized terminology, know all the “professionals” and like to name drop them, always have a quick critique (without real “why”, if you’ll notice) use all the “correct” soil ingredients and the most expensive accoutrements. And they act accordingly: like Bonsai (capital “b”) is an exclusive club that requires hazing and belittlement of any beginners that happen to ask an innocent question. Amazingly, though, you don’t tend to see many (or any) of their trees.

With all that said, my question to those that deride trying to develop a tree quickly is this “Why is that a bad thing?” (this questioning is what really annoys people about me. If you tell me something, especially in the form of a commandment, I’m going to tend ask “why?”. This is the real meaning to my name Adamaskwhy. Although I do relish all the emails and questions, the name is an embrace that I, Adam, ask the question, why. It bugged the hell out of many of my teachers in school too)

If we can get a tree to thicken, or ramify, or just grow, faster, then why not? If the results are the same, then there is no reason not to use a quicker method. Let me give you an example.

About a hundred years ago, someone had this idea that we could use this new industrial product, spun and annealed copper wire, wrap it around a branch, and bend said branch to a position that gives an illusion of age, more quickly than the previous methods (before wire, the options were: using clip and grow techniques like directional pruning, weights attached to the ends of branches, and even silk or rope bindings to hold a limb down. The later is known as Kinbaku or Shibari……wait, that’s just a joke. Do not google those terms….). The use of wire gave the artist more flexibility, more design options, and a, yes, faster method in developing a tree. At the time, many “traditionalists” said it was not in the spirit of bonsai to use wire.

Nowadays, if you don’t use wire, you’re not considered to be a serious bonsai practitioner. (A “perpetual intermediate” doesn’t understand the Master’s Creed “yesterday I was a student, today I am a student, tomorrow I’ll be a student”).

The buttonwood defoliated and pruned.

My favorite tool for the job of removing a tree from a recalcitrant pot is just a simple, American-style, steak knife. I got this from my mother-in-law’s very exclusive, and collectible, knife set. Mucho dinero, if you understand. If you can, steal only the best, if you can’t, the dollar store variety is good enough. 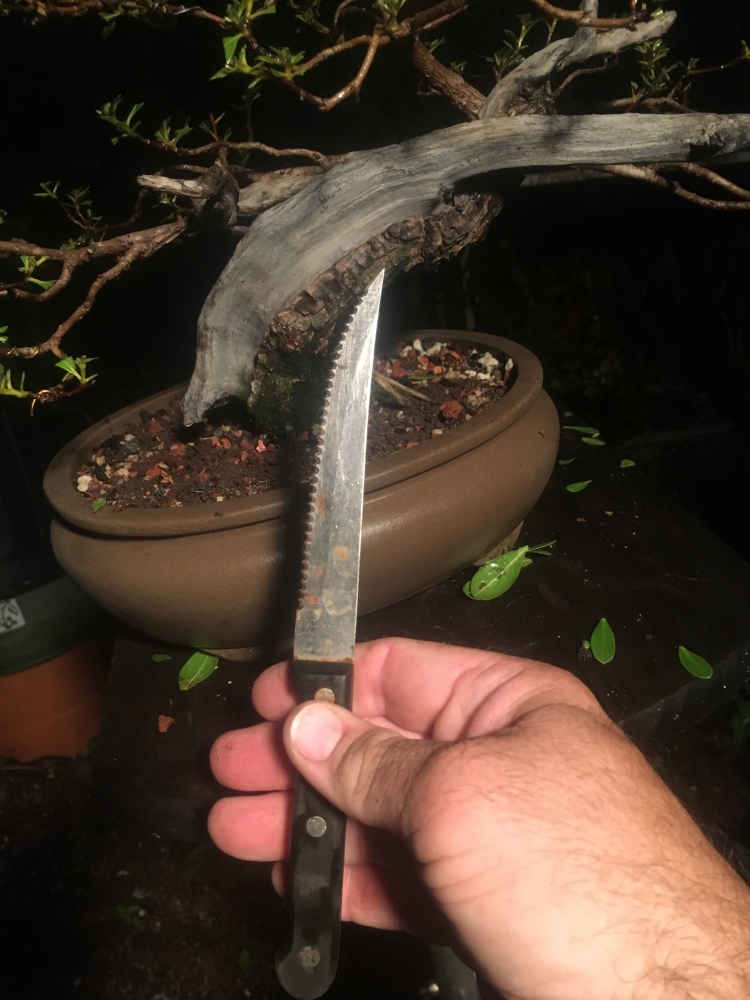 The technique: simply cut alongside the inner lip of the pot until the tree comes loose.

Now you gently rake out the edges. If your buttonwood is newly collected, you may have a bunch of roots like this, but they only originate from one or two main roots, so be very careful, rake gently.

I prefer a single tine root hook for this purpose. Less to entangle and rip the roots. I liken buttonwood roots to al dente spaghetti. Flexible but very tender and snappable. 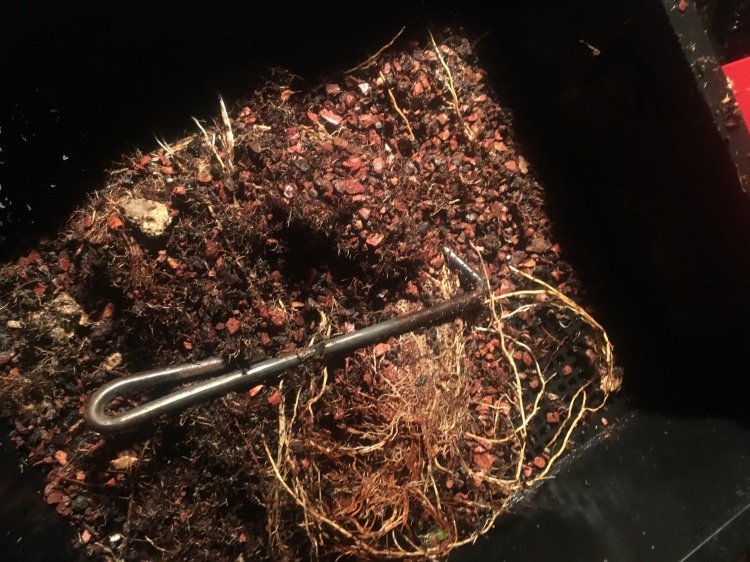 This tree has a good, 360 degree root mass. But I still don’t rake it all the way out or bareroot it.

The buttonwoods roots do well in a mass like this. And being a collected tree, don’t need that “traditional ” nebari root spread. But you can encourage it.

Below is a new root emerging from just above the soil line and creeping toward the dirt. Don’t break these off. A root like this will thicken quickly and it improves the root spread.

That’s how the two roots on the right began, actually.

Freshly repotted, in my standard mix (one part each of expanded slate/shale, pumice, charcoal, zeolite, pine/fir bark, and two parts lava) but I added about a handful of the old soil back in, to make for a more water retentive mix. Buttonwood grow in the estuary or marsh zones of the Florida coasts. They are adapted for water, and do better, especially in a hobbyists collection, with a more wet mix. 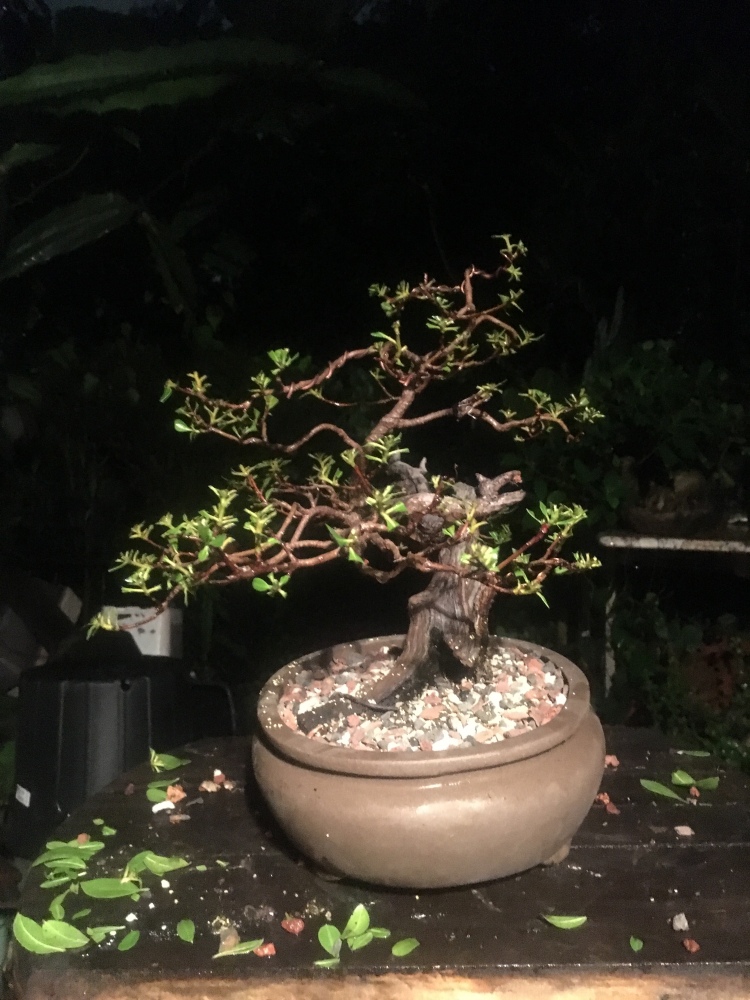 If the tree were in a professionals collection, or a high level bonsai-ist’s, you could use a dryer mix. A dry or wet mix can regulate the growth rate of a tree. And, surprisingly, a dry mix makes your tree grow faster. If a tree is happy, it doesn’t have to grow all that much. And a well watered tree is happy. It’s when we push it, making the roots stretch , or fertilize, that’s when development happens more quickly. But pushing a tree is when it’s more likely to die as well. 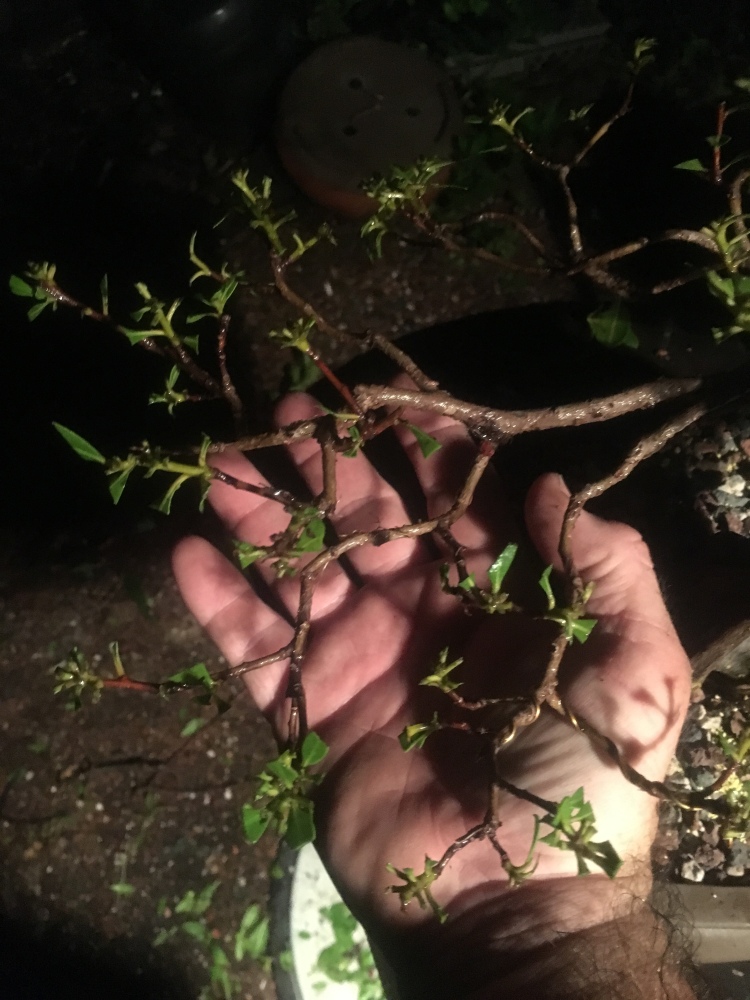 A tree grows fastest when we defoliate, or drought, or after a cold snap. It’s a hormonal response from the tree. Just don’t do it too much. Hormones make a tree do what it does, but….but… it will push a tree until there’s just no more energy left for it to grow. 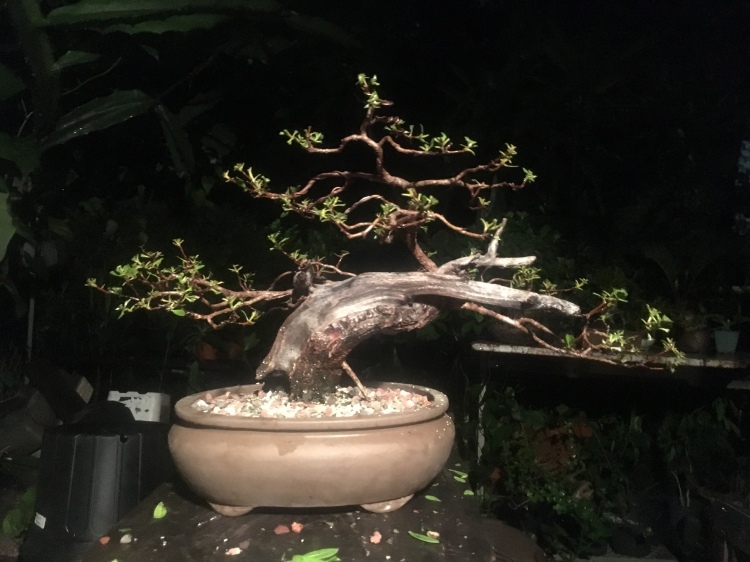 Back at Janice’s place, among her babies.

Ready for the summer growing season. After a repot like I did (again, stress) it’ll push growth like it’s a new seedling. 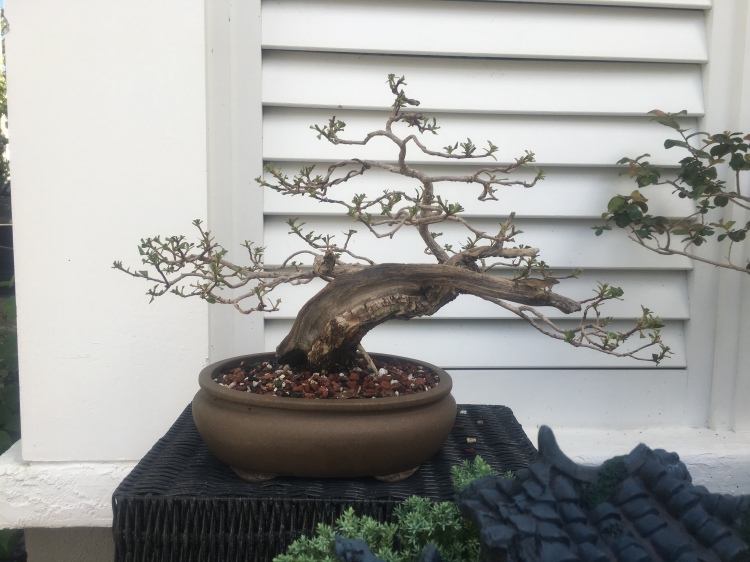 Watch my Instagram or Facebook for updates throughout the season and you’ll probably see the tree next year.

Oh, here’s a link on a use for buttonwood other than bonsai. Enjoy!