The portulacaria afra is known by many names, for example, even way down in South Africa, where they are native, they have a few names: spekboom, or porkbush, or even elephants food. In the succulent community they call it (inexplicably) dwarf jade, even though it can grow into a small tree.

In bonsai, some people call it “not-a-bonsai”. We shall not name names nor shame those mutterers much more than necessary.

As you can probably guess from this post (and all the other Posts I’ve written with portulacaria as the subject) , I believe it’s a valid bonsai subject (and it’s really just a matter of taste whether a person thinks one plant can be a bonsai or not. My criteria, if you can make it look like a tree, then it’s valid. Period. Bonsai is the art of making a small plant or tree look like a big and old tree. You can argue all you want about woody stems or Japan, but bonsai has entered the Art World and that means it can and will change. Sorry guys) . And besides, there’s no accounting for taste, I mean, as an example, who even likes lima beans?

This particular tree came from a friend down in the Palm Beaches. He is having me develop it while he does some serious land improvement on his property.

I’ve been allowing it to grow and get healthy in my nursery, but now it’s time to do some work.

As you see, the growth is pretty strong.

Most of it doesn’t fit into the design though, so……goodbye!

Look closely at the pics: observing how a port (or any tree) grows wildly will help you to develop a good tree in the long run. 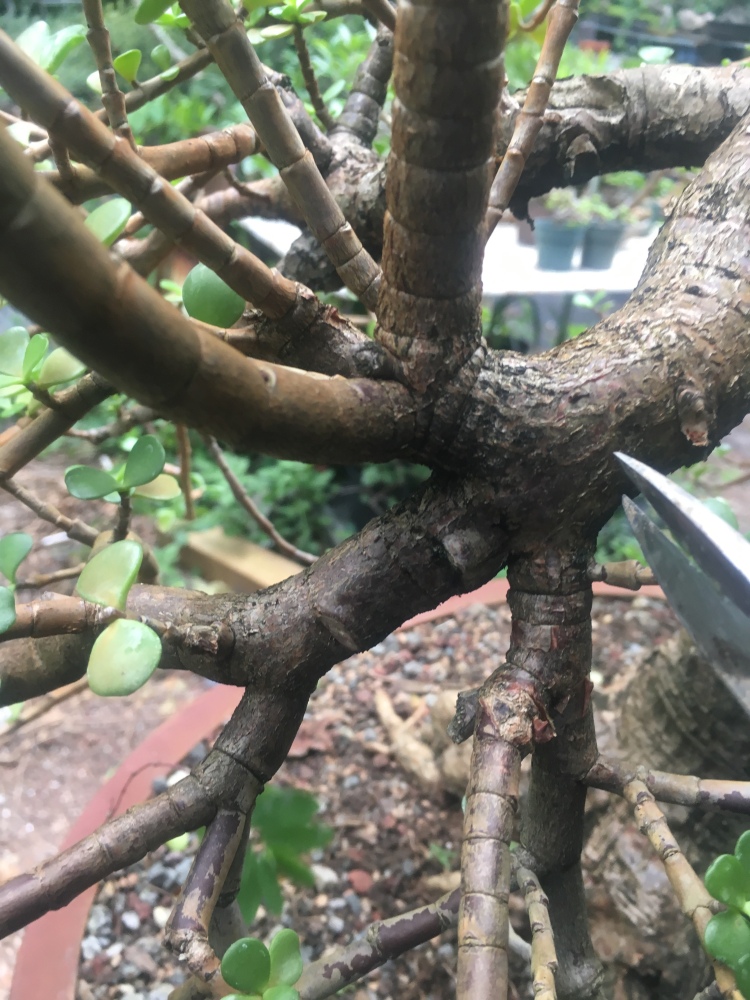 Wild growth is straight up, mostly.

But some branches weep. Now, it might they are weeping because of all the suffering in the world, but probably it’s just sunlight and hormones. And a little to do with turgidity, hydraulic capacity and cell wall rigidity. 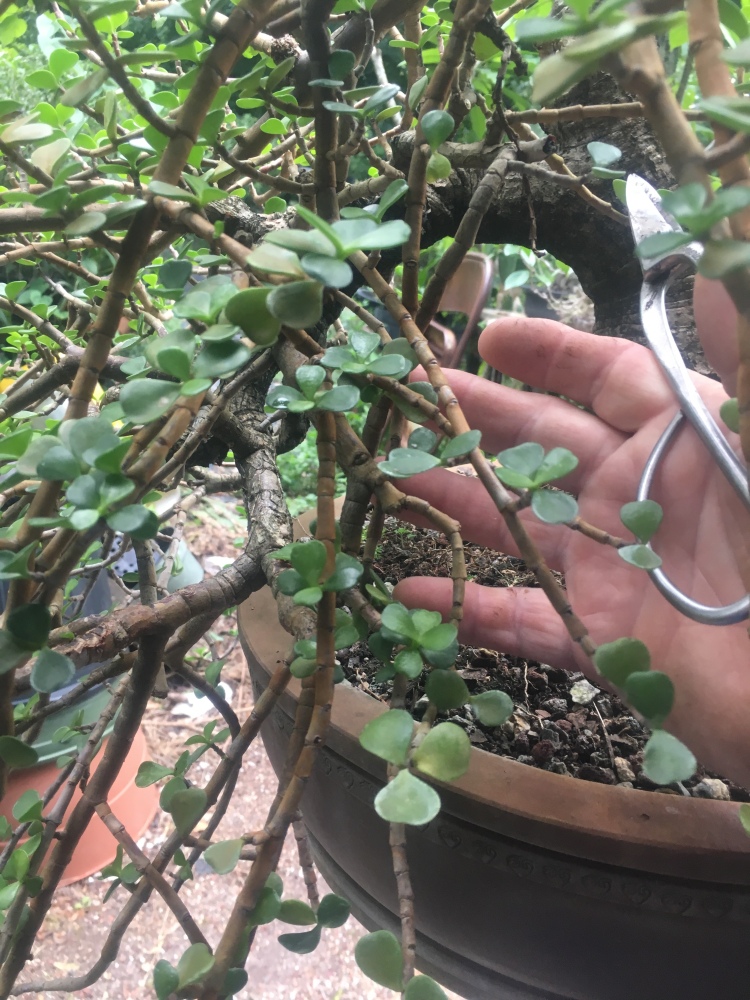 Now is the time for the tough choices.

I did. I chopped it. 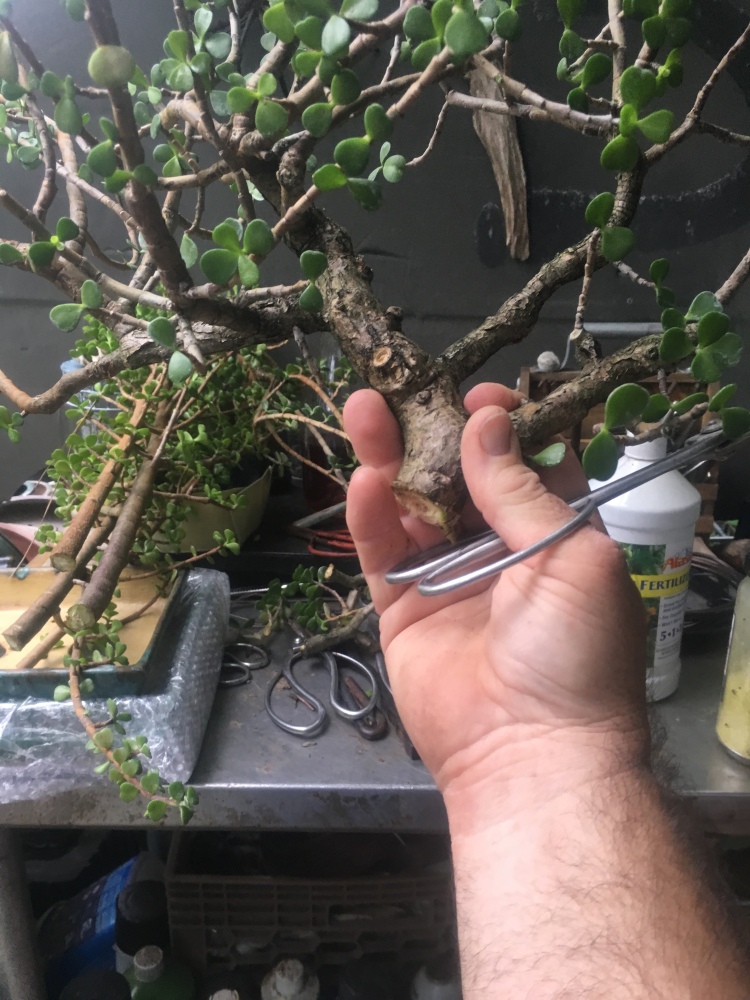 Not only that but it’s a chop-a-delic massacre!

Enough for a crop of cuttings

I must apologize. I know there are some readers out there that have trees smaller than the branches I just removed and there’s a certain anxiety in seeing the mayhem I’m visiting upon this poor tree.

But sometimes you Just gotta start the game over.

The top has a good leader. It can stay as it’ll draw the growth up. Well, maybe. 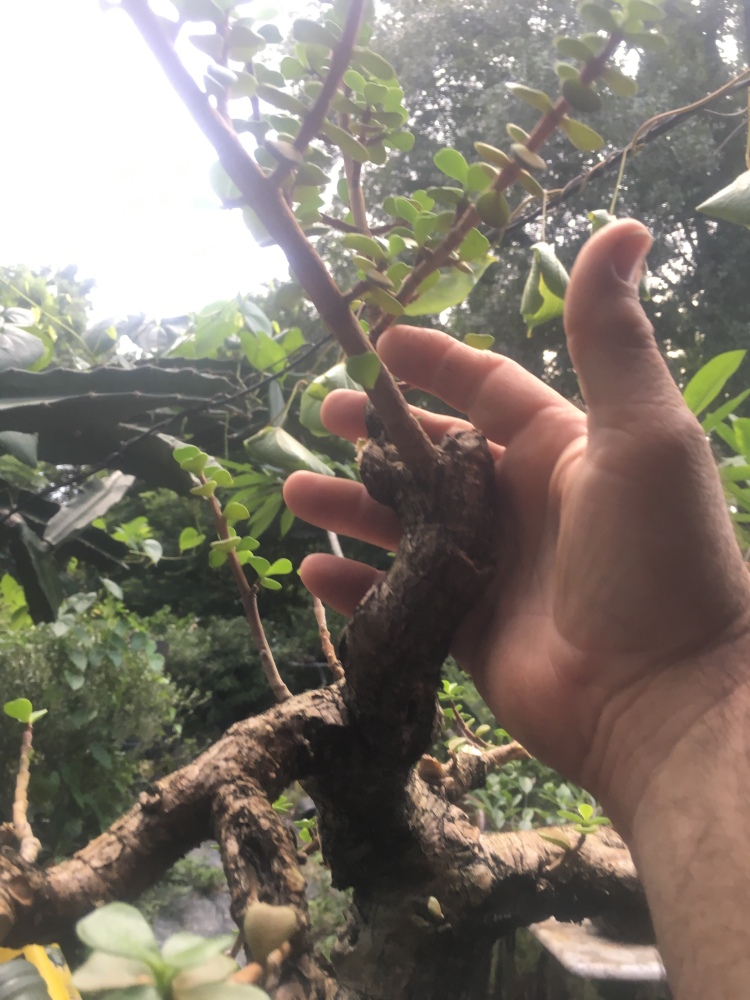 The main branches have good taper and a gnarly character. 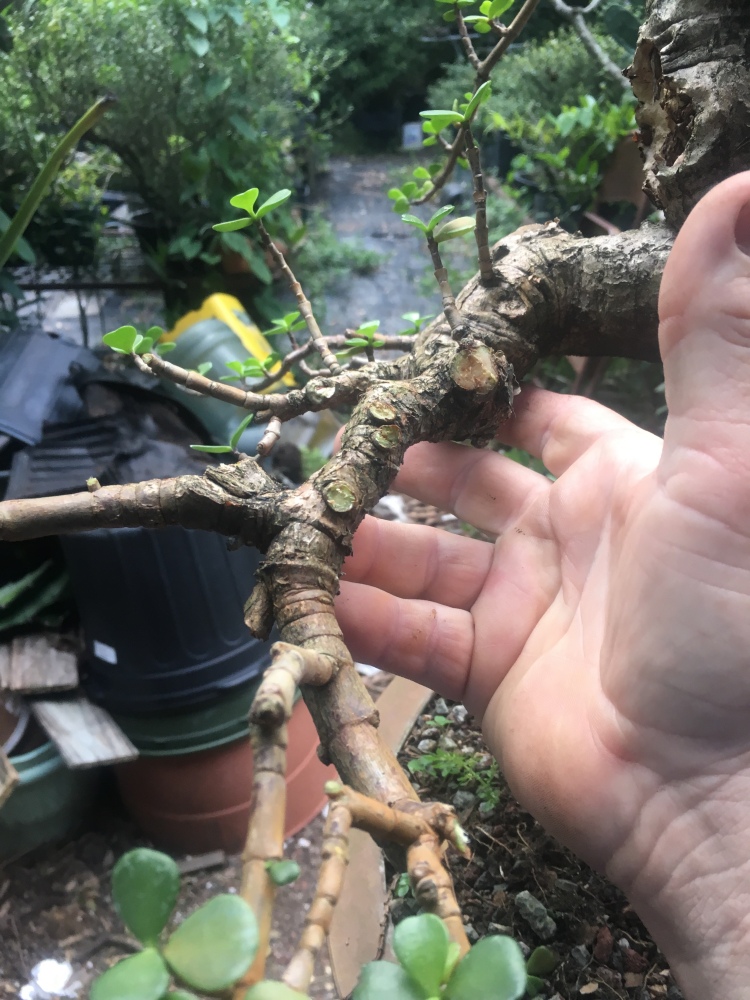 I am keeping some of those long shoots. Well, for now.

The next step is to change the front a bit.

The current front is the above pic. That big root is pointing right at you. When I first started in Bonsai, a long time ago, it was taught to me that roots or branches on a bonsai that are pointing at the viewer are a no-no. Called, un-ironically, “eye pokers”. Me, of course, being the anti-authoritarian, cuss that I am, asked,

The answer that was presented to me was, in Japanese culture, to point at a person is considered rude.

I think in every culture that’s considered rude.

The real reason we don’t like eye pokers is that you can’t see them. You see just the single point, well, POINTING at you. There’s no taper, no movement, no nothing.

Art, Bonsai, is a visual thing. If you can’t see it, it has no impact.

Look as those roots! 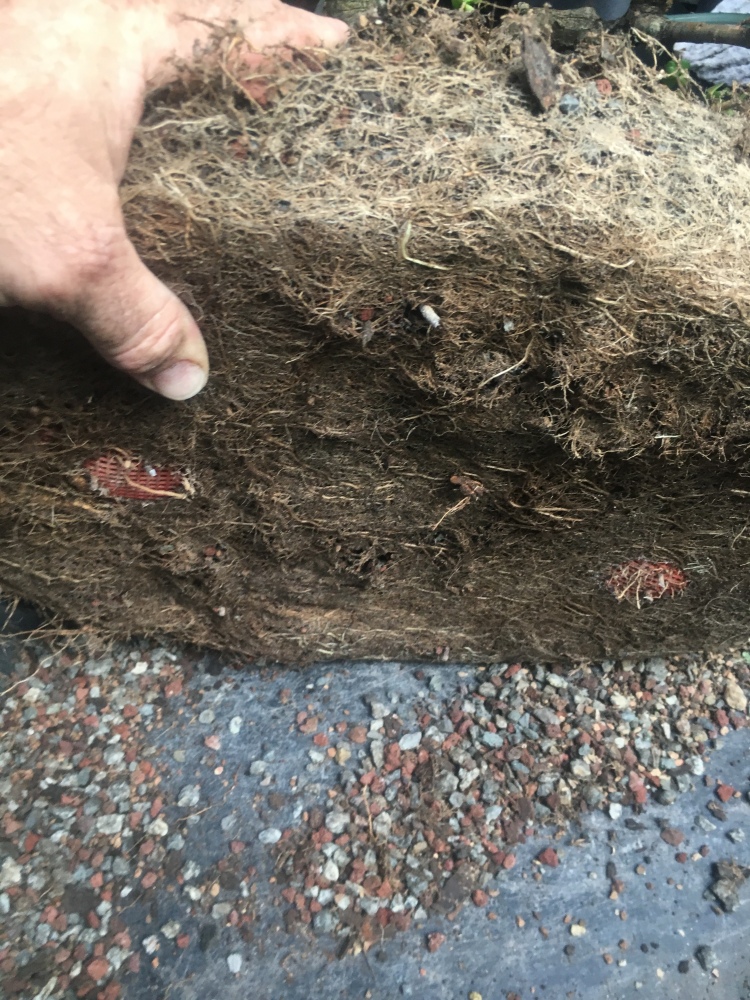 The technique with portulacaria is that we don’t need to rake out and bare root the tree every time we repot it. 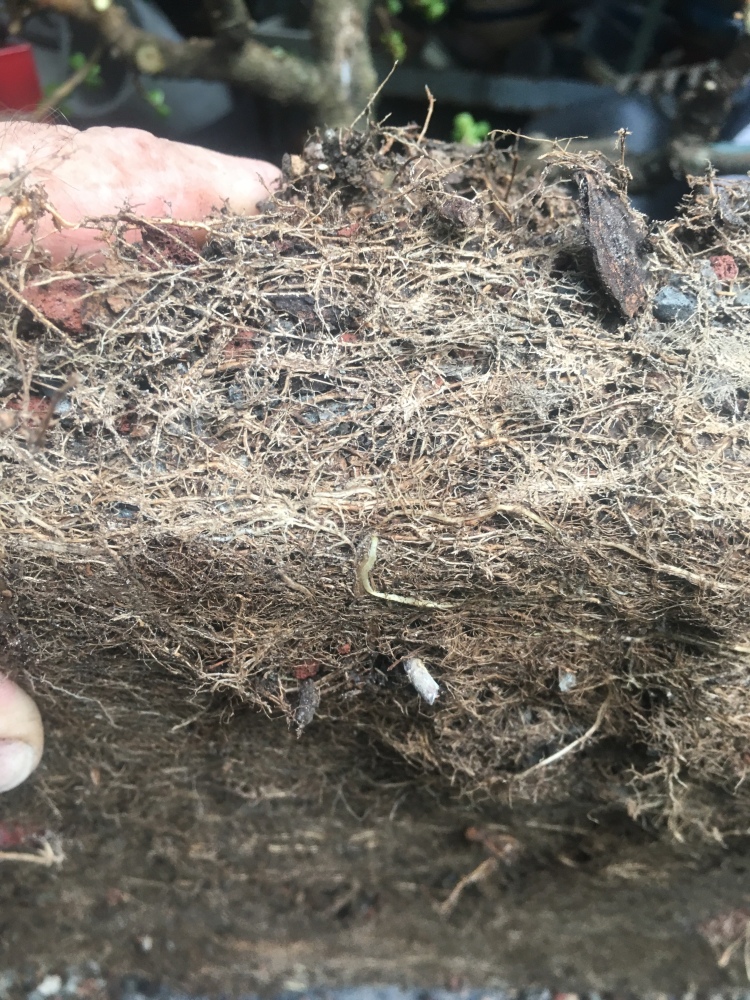 Just a gentle combing of the winding and terminal roots ends so they grow radially from the trunk. I prefer a single tined rake for that reason.

I don’t even like to cut heavy roots back like you’d do on any other tree. Sometimes you need to though. 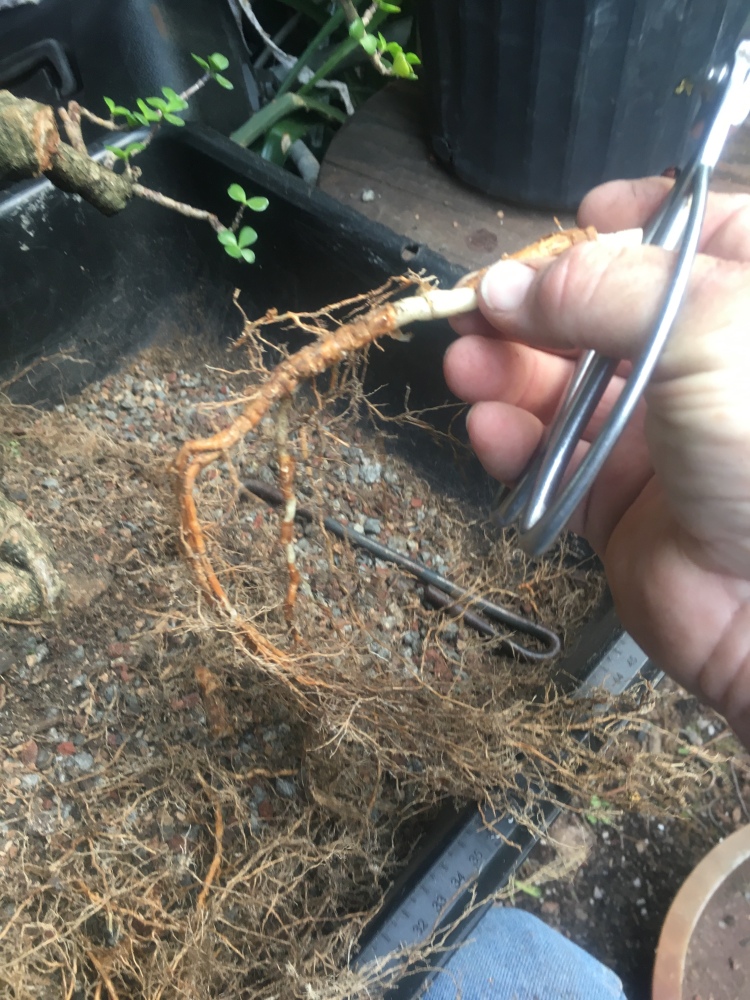 I will throw a little of the previous soil, sifted of course, back into the pot. I’ve observed mycorrhizae in a portulacaria root system and that’s a good thing. 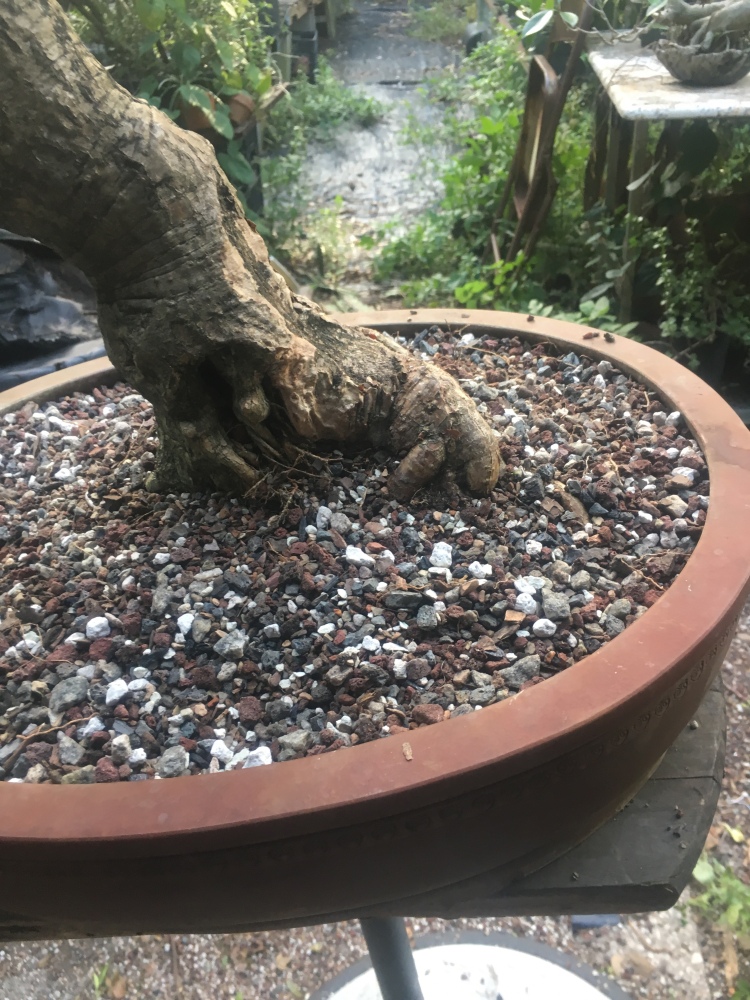 I prefer a granular, time release fertilizer for portulacaria (and all succulents really) because they tend to not hold much moisture and the high nitrogen pushes growth.

And of course, the pre emergent weed preventer.

I’ve had a few discussions recently about pre emergents. They work by inhibiting the germination of weed seeds. Some people are afraid of it because they think it’s some evil chemical that is unnatural and synthetic. Truthfully, everything is a chemical. So when I say “hormone” or “nutrient” what I’m really saying is “chemical”.

The companies that developed the pre emergent treatments looked at trees that naturally had few weeds below them. They took the leaves, the stems, the roots, the fruit, and the seeds, and experimented until they found the compound that inhibited foreign seed germination. Then they figured out how to make this compound, how to apply it, and now they sell it.

And it works. The process is to remove all existing weeds. Wait a week or two and remove the weeds that grow in that time (you missed some, admit it). Then apply the pre emergent (a good name brand is Preen). The secret is, every time the soil surface is disturbed, re apply the product.

The way it works is the hormone that prevents germination creates a barrier or film on the soil surface. If you disturb that barrier, you’ll get weeds.

Anyway, back to the tree.

Except on the wee little branches (which will grow quickly now)

A few adjustments and….

This tree will stay under cover for about a week, so that those few places I cut in the roots have a chance to dry out and scab over. This prevents rot in the root zone.

The hardest part about these trees is the repot. Be gentle, don’t water for at least a week, and then sparingly until you get new growth.