I found a sweet, yet odd shaped, willow leafed ficus at my good friend Don’s house.

Who, I might add, is getting quite a large collection.

Short and stout. It looks to me that it was a root cutting that’s grown out. 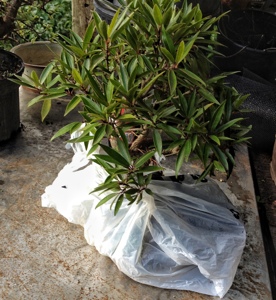 Bag it and tag it!
He wouldn’t let me buy it but instead insisted on trading. I gave him a good podocarpus and promised to help him pot it up.

Nice trunk and a good leader. And whats important is that there are choices.

This is the back, probably.

Side. You can see how flat it is. Not much for back branches. But, if I know anything, I know I will get beaucoup budding from this here ficus salicaria.

Good roots to work with. Let’s say we clean them up a bit. 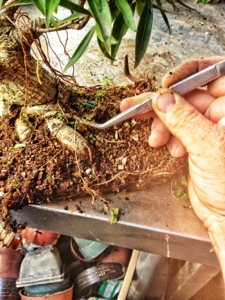 Please attend whilst I pluck, like errant follicles, the weeds growing here.
Ya, right

If I wasn’t potting the tree, I would be be using tweezers to weed. They are actually easier. I’ve seen people use chopsticks too. If I want to show off I’ll use them. 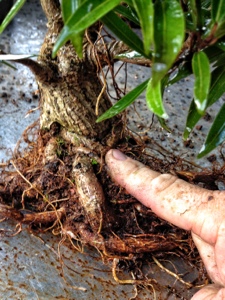 Sometimes I feel like a plastic surgeon. This root must be excised.

So, looking at the roots on this side,it is definitely the back.

The roots on this side are so purrty.
A note on the roots. This is the absolute latest I will be working on tropical plant roots. It is late August or early September (I’m in Orlando. In the north, it may be a good stopping point in mid August.). The roots of a ficus act as sugar storing organs. Hence the reverse taper they show. (a root usually will be fatter at the trunk and taper to a point.)A ficus, more often than not, will be almost shaped like an eye. Thin at the trunk, fattening in the middle, and then tapering to a point. This organ holds the sugar reserves and, when we trim them, we make the tree work harder to make up for the lost sugar. If you root prune too late in the year the tree won’t have enough time to recoup, and it could die. All this is moot, of course,if one has a heated greenhouse where the nighttime temps won’t go below 60 degrees Fahrenheit/15 Celsius. That’s the magic number for root growth. I’ll be in the 70-80’s until November. You should give at least a months growing time after root work for those roots to recover before winter (or summer. Some trees go dormant in the summer when root temps are too high. And if you cut those roots off they won’t grow back and the tree dies) 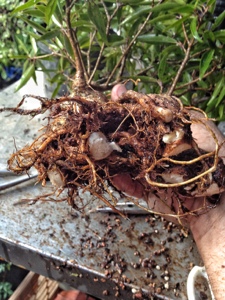 Make clean cuts on the bottom of the tree. Clean cuts heal quicker. 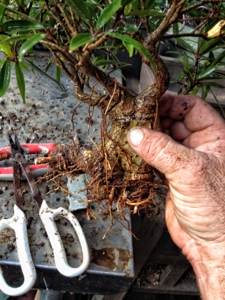 I will let the aerial roots reach the soil and fill in the back of this tree. 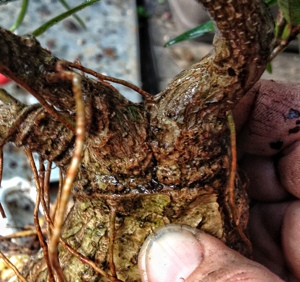 This seam shows where the cut was and how much to new shoots have grown.
As I said earlier, this was a root cutting done by a friend named Mike (who happens to be in charge of the breeding program in the U. S. of a small hoofed animal called a Klipspringer. I know some important people!) most root cuttings on salicaria will sprout all along the outside edge and cause a severe bulge (reverse or inverse taper)

Like that. The way you remedy this is by choosing the strongest and cutting off all the rest. 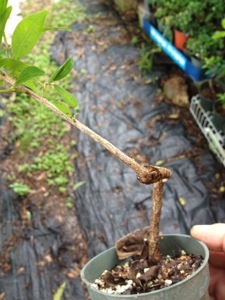 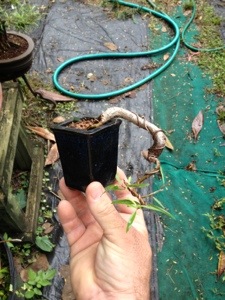 Speaking of reverse taper, I’ll need to cut here to make sure I don’t get a knob.
And I have three branches coming out of the same spot. 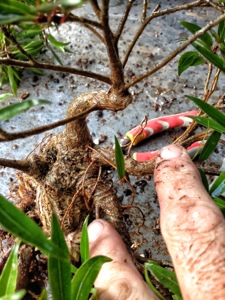 The choice is between these two.

Normally, I wouldn’t hesitate to remove the middle one but that’s the only one that is leaning to the back.

And the tree is a bit like a politician. Lacking in depth.

I’ll bow to my experience and hope I get a good branch growing in the back.

There it is.
Time to pot it. 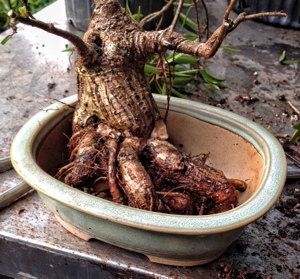 This will do. It’s a nice pot. Maybe a little too deep as far as a ficus goes but not traditionally. 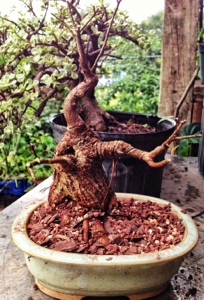 There is some scarring from wire that was left on too long. If we wrap the wire so that it crosses those scars it will help mitigate them when the branch thickens.

Talk amongst yourselves; this is the most boring part. 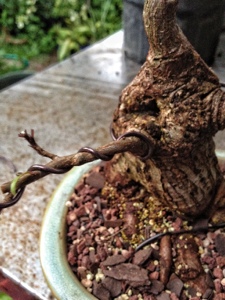 There. Now to bending.
Even though this tree has shape I am treating it as an initial styling. 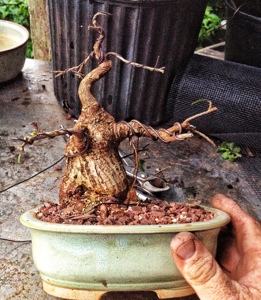 Mainly because of the big branch I removed. 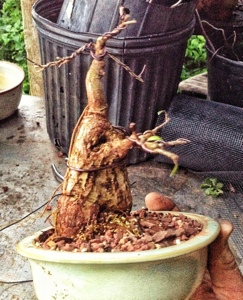 These two views show the serious lack of back branches.
I will trust that they will grow. Cross your fingers.

I could cut this here and let it grow out but I like the shape of the leader. I think it will age well.

This branch here is also a flaw. It should be coming out from where my finger is. I shall encourage any growth there. 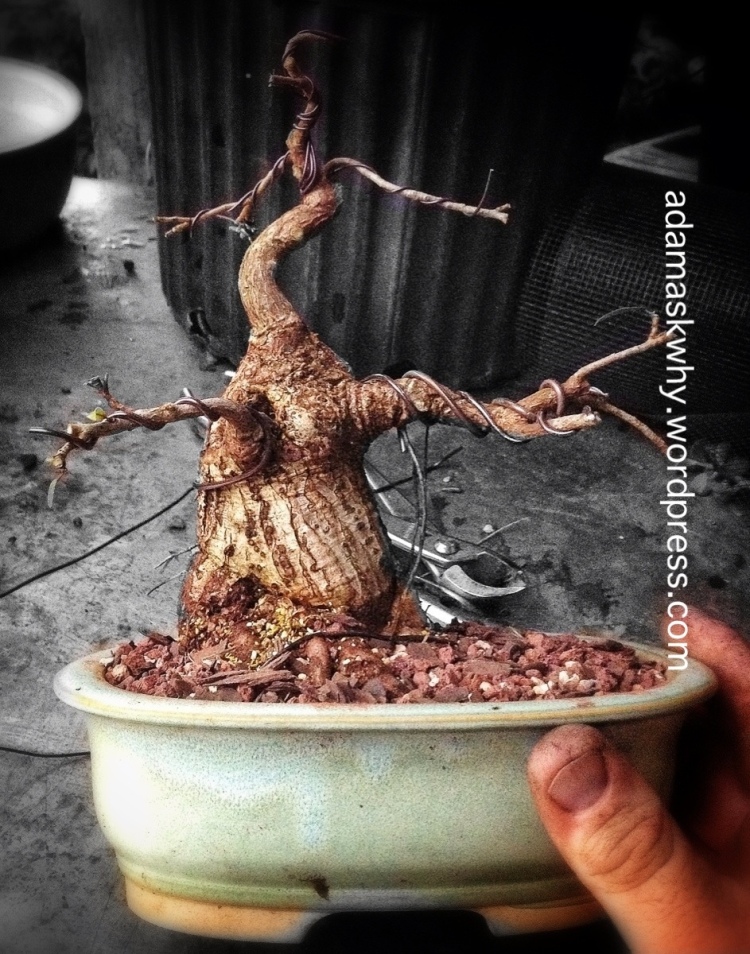 There it is. All prettied up with some fancy editing on my iPhone.
I almost always pot it off-center like that. I’ll explain that in another post though.
Ttfn