We recently had a surprise visit from Frank Heidt to one of our monthly workshops at the Central Florida Bonsai Club. 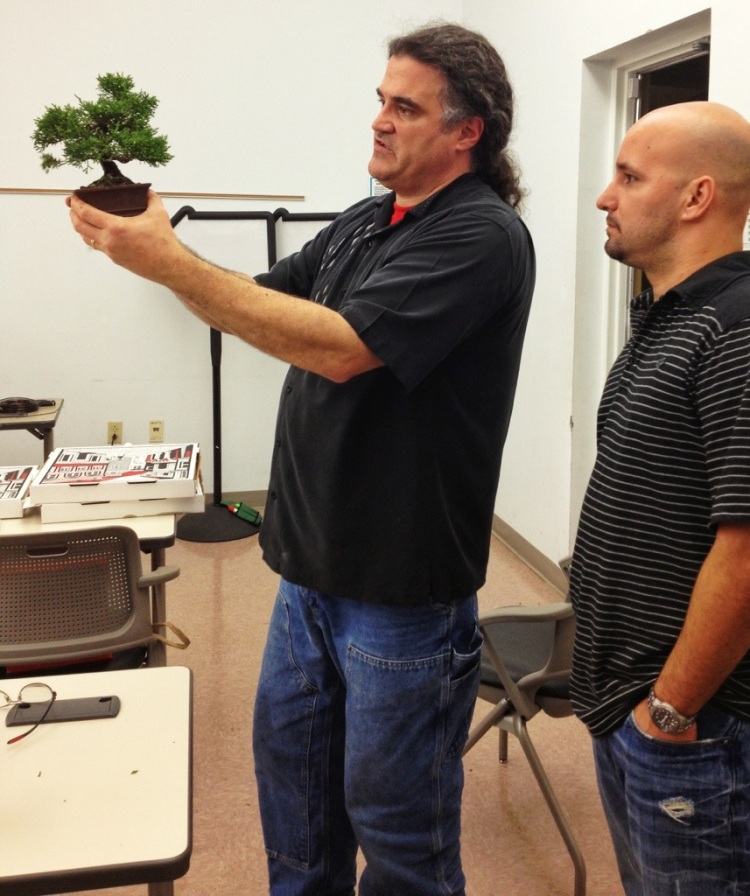 He’s the guy on the left. That’s Dave on the right.
He was in town and needed to get his mind off of things and stopped by.
He’s a very knowledgable bonsai artist who’s training began at the Brooklyn Botanic Garden and of late he’s a student of Frank Okamura and Dan Robinson.
He didn’t want to show up empty handed so he got a tree and was going to work on it.
He got so caught up in looking at all of our other trees that he didn’t have time to work on it. So, graciously, he gave it to Walt.

Today Walt came over and style it. 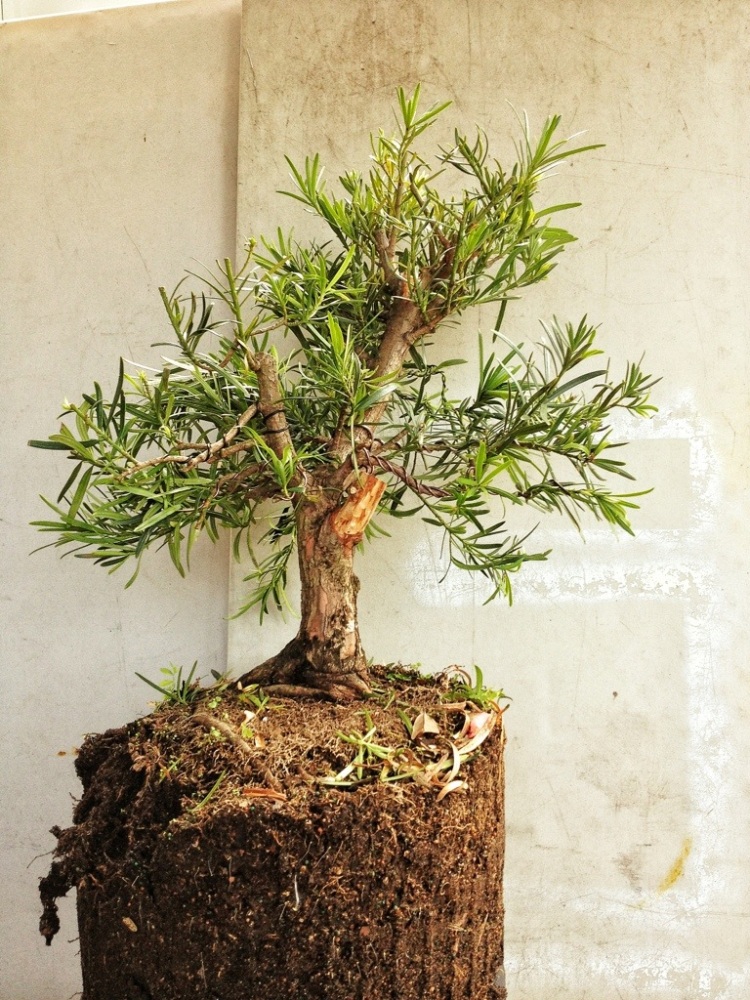 Walt and Frank had worked a little on it at the workshop; here it is now.

There are only two sides which might make a good front.
Here 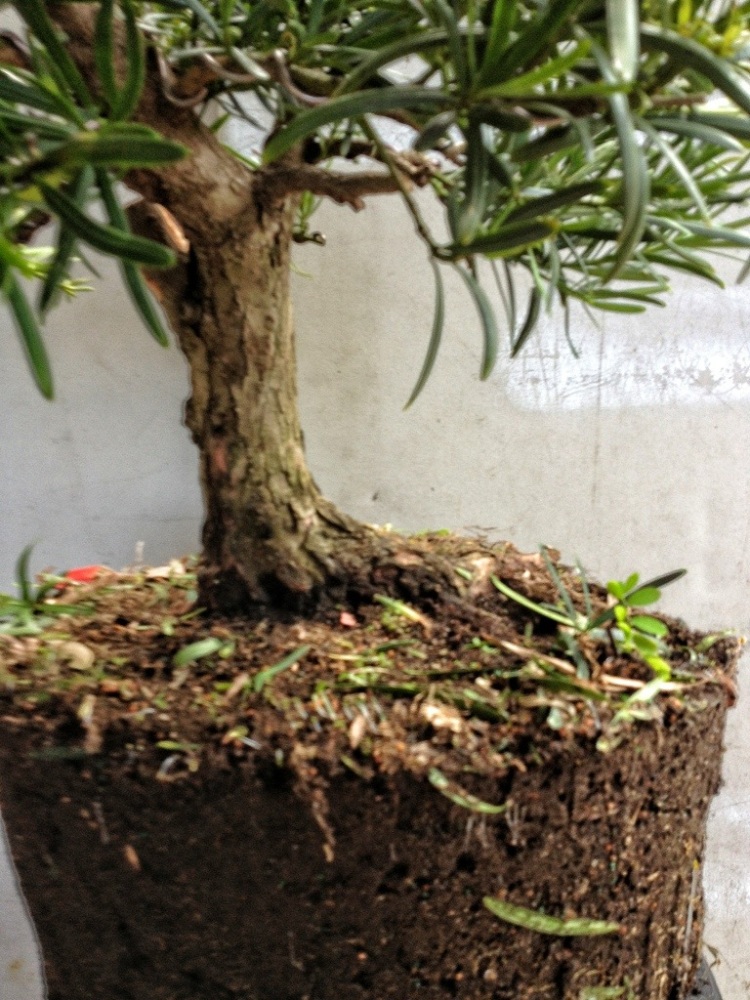 Let’s examine the pros and cons. 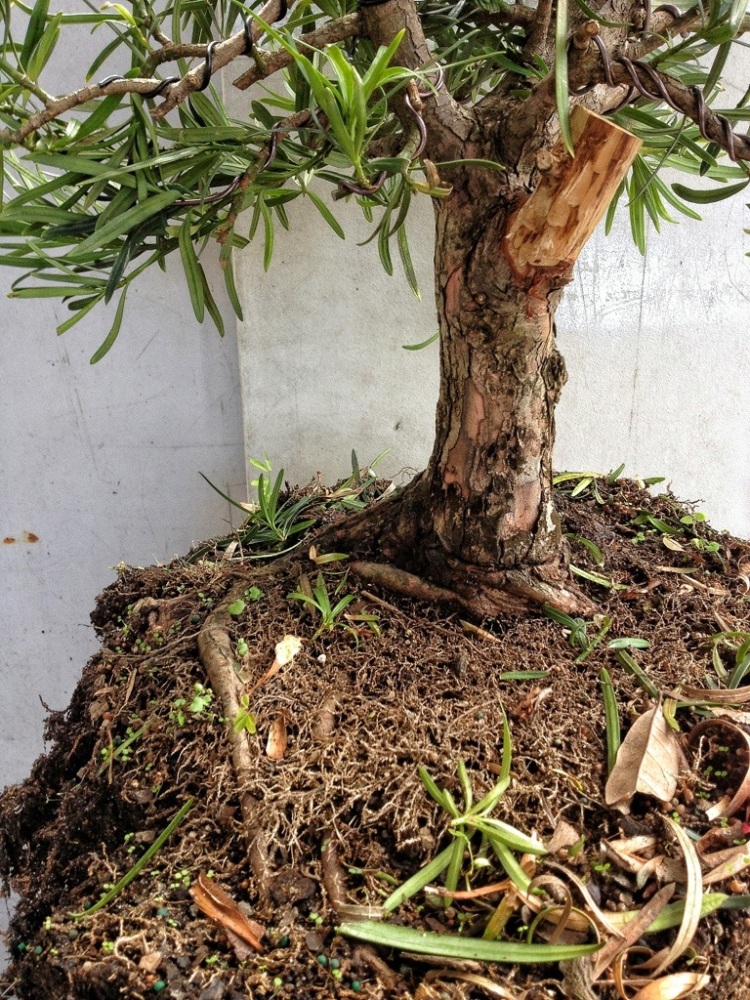 If we use this, besides the crossing root, the biggest problem is the angle of the trunk.

The whole tree leans back.
If we adjust the angle-

Because this will be buried.
If we use the opposite side

The main drawback is this root. But that’s easily taken care of.

This is good though; and it was buried.
Here’s the front we’ll use.

This big branch was removed by Frank. It will make a good Jin. 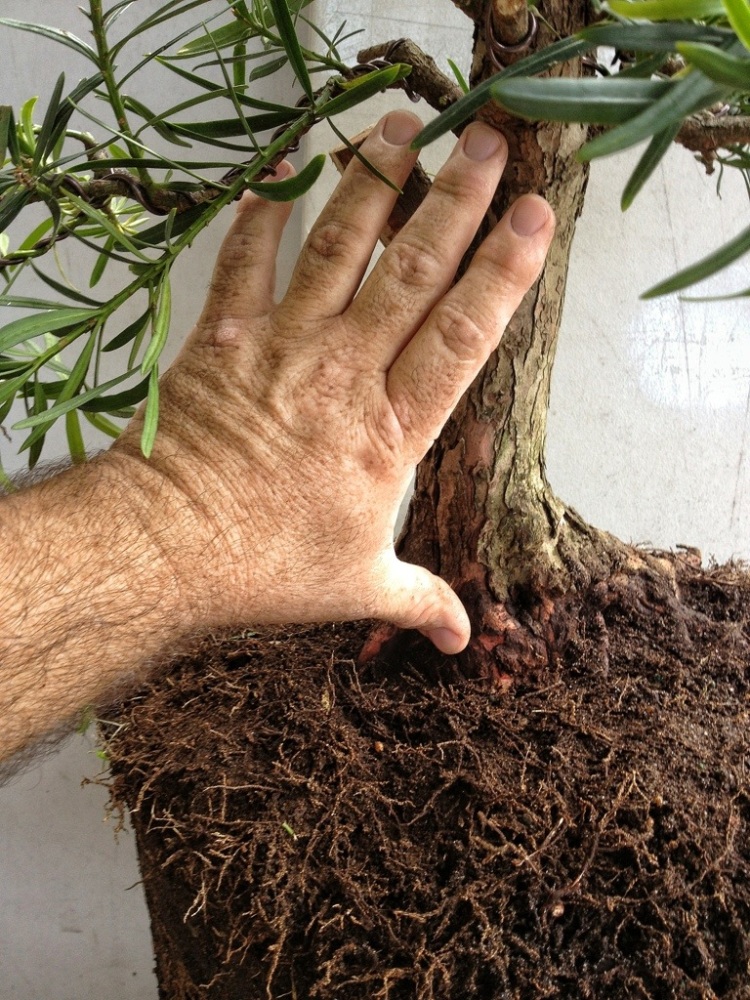 Which, from an artistic point of view, is boring. The mind won’t see any distinction. A good rule to use when styling a tree is the RULE OF THIRDS.
Break the tree into three parts; then either the canopy should be 2/3rds and the trunk 1/3rd or vice/versa. We’re gonna cut the top back a bit

And do a little more Jin work on it. 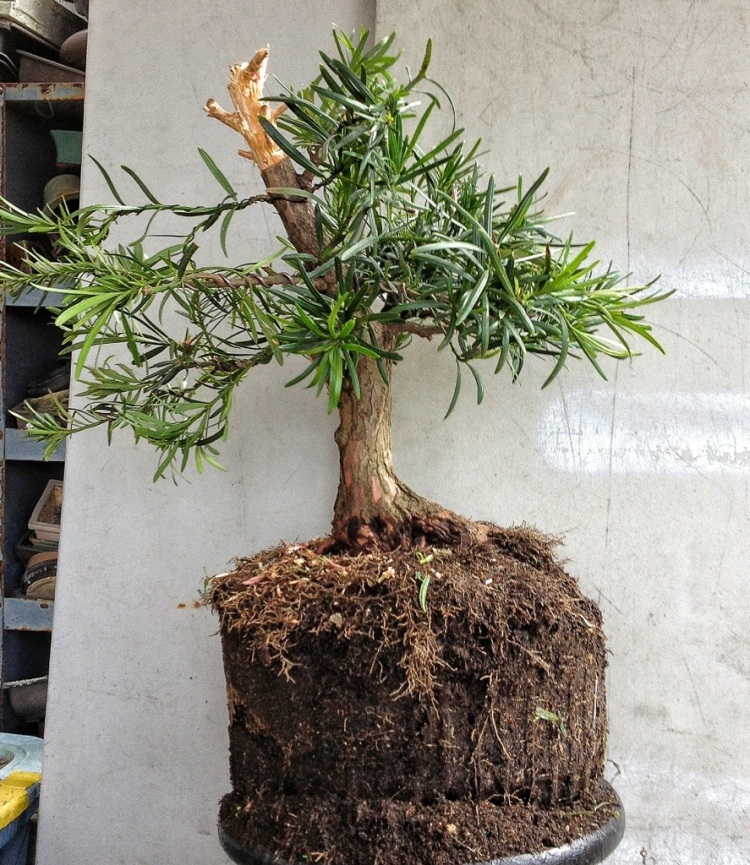 That’s good for the moment. The wood on a podo needs to dry a bit before we can use power tools so we can wait. It’s wire time! 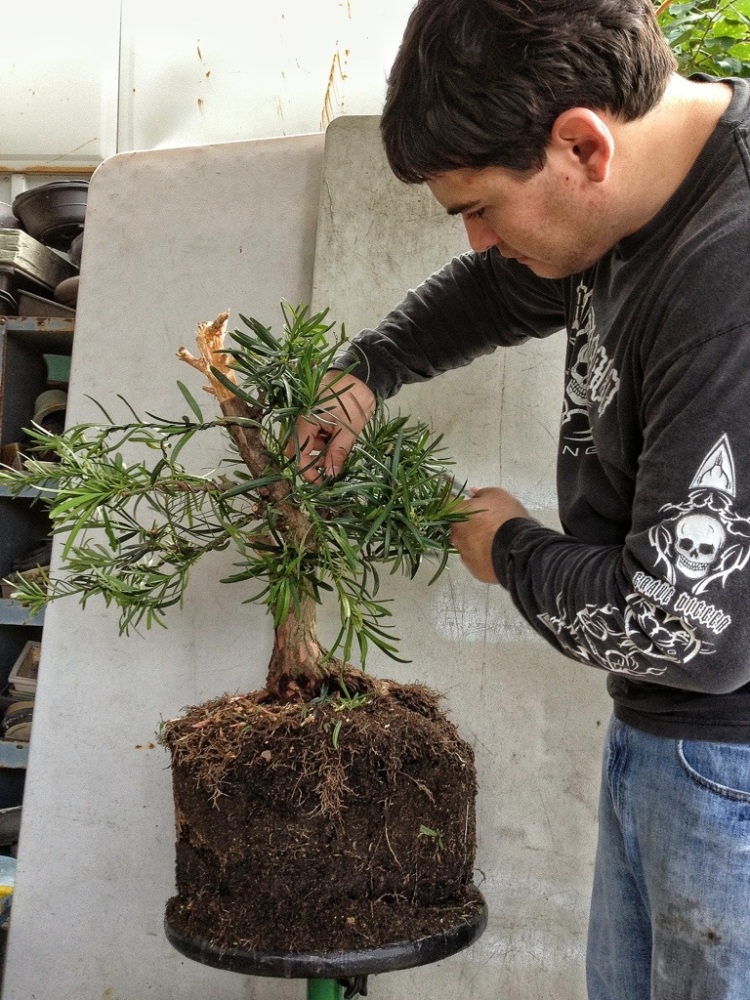 I love having a helper; I’m gonna get lazy.
One tip when wiring a podo

The leaves grow all over the branch so wiring is tough on the younger (un-lignified) branches.
Just cut off the leaves 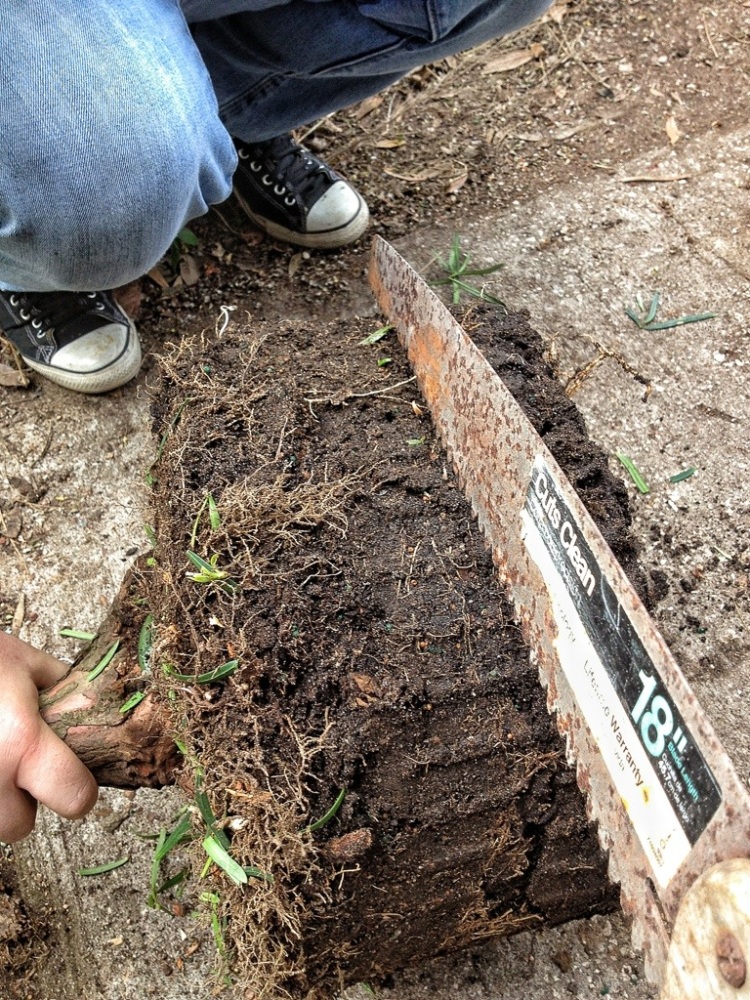 This is January in Florida and the podo is growing. In order to balance all the pruning we’ve done we will cut off half the root ball. 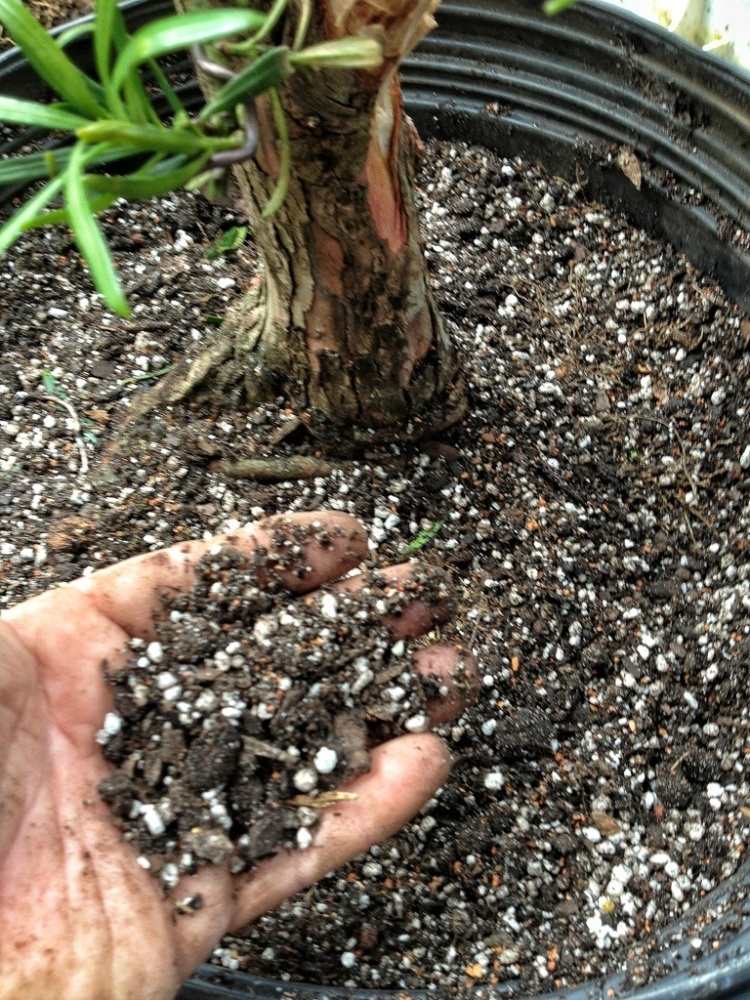 And plant it in some good potting soil, (I make my own) fertilize and water well.
Now for the unveiling 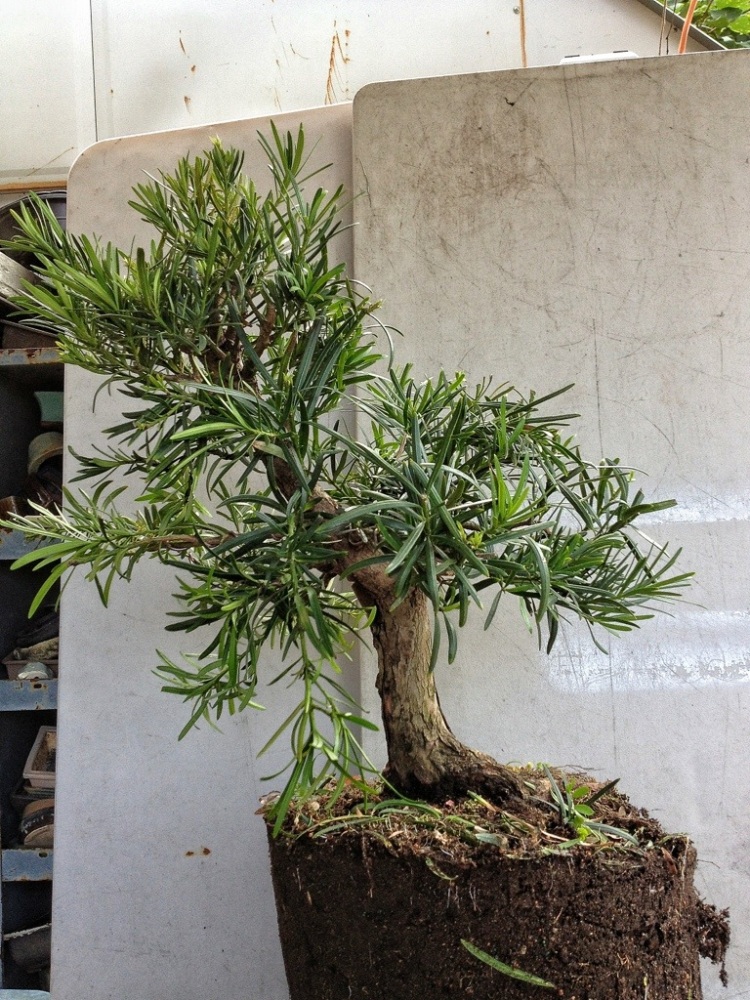 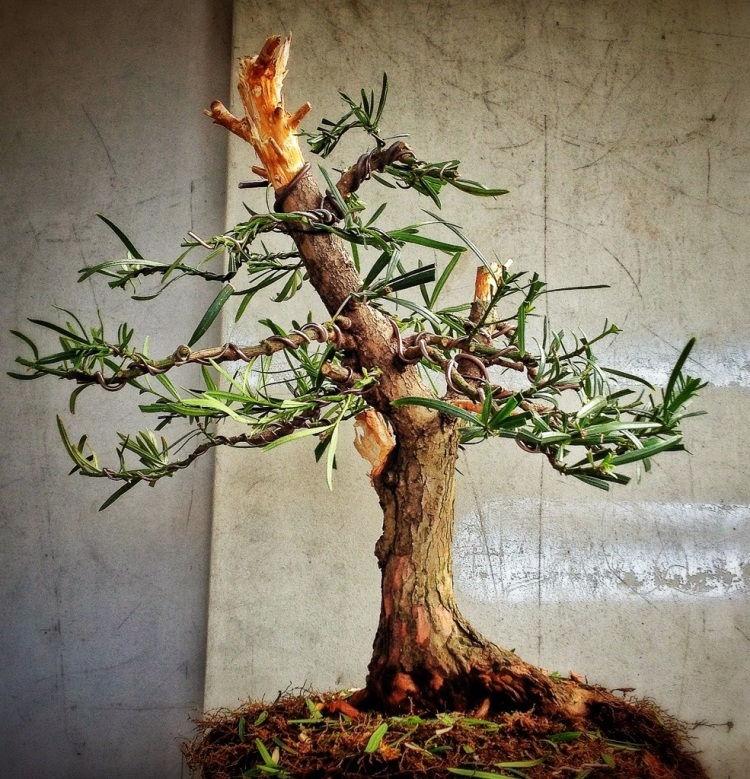 And the after.
Thanks for bringing it over Walt. Great tree!