Okay, I admit it, I have an ilex problem. I collect ilex bonsai the same way that some people collect Hummel figurines, baseball cards, comic books or cats. Or even ex-husbands.
What can I say? they have small leaves, quick growth, they’re able to be kept in a small pot, cold hardy in my area, and just so darn cute.
I had thought to break this post into five different posts about each tree but I don’t want to torture you with so many little stories, so I’ll just hit on the important parts of each tree.

This is our cast of characters.
Let me introduce them to you.
I’ve exhibited this one before. It was in the BSF show 2 or 3 years ago.

This one in the nice porcelain pot is in its 2nd year of a rejuve. I’ll talk more about that later.

This one is a hollow trunked ilex in a handmade pot. One of my favorite. It’s a really natural looking tree. 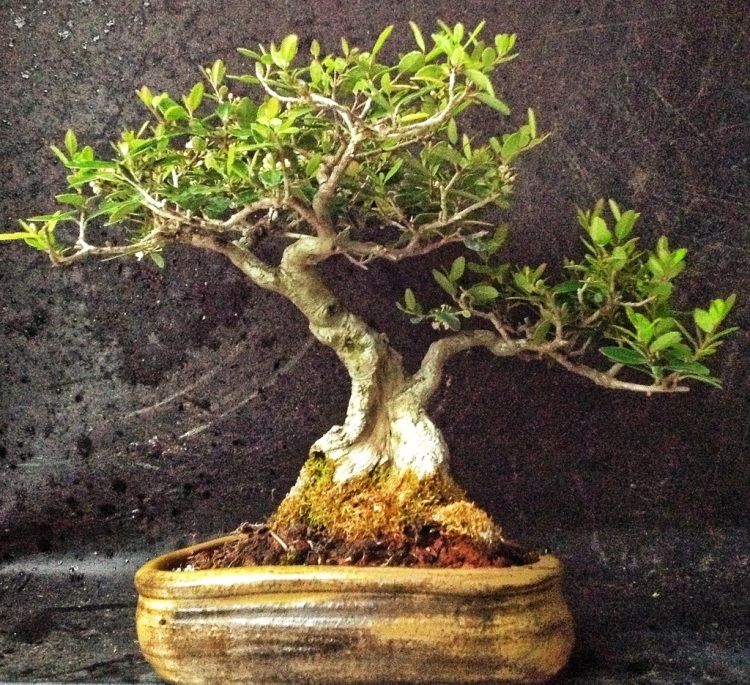 This one is about done with the rejuve process, time for a new pot and some wire.

And this exposed root style tree needs a rejuve. It didn’t get much growth at all last year. 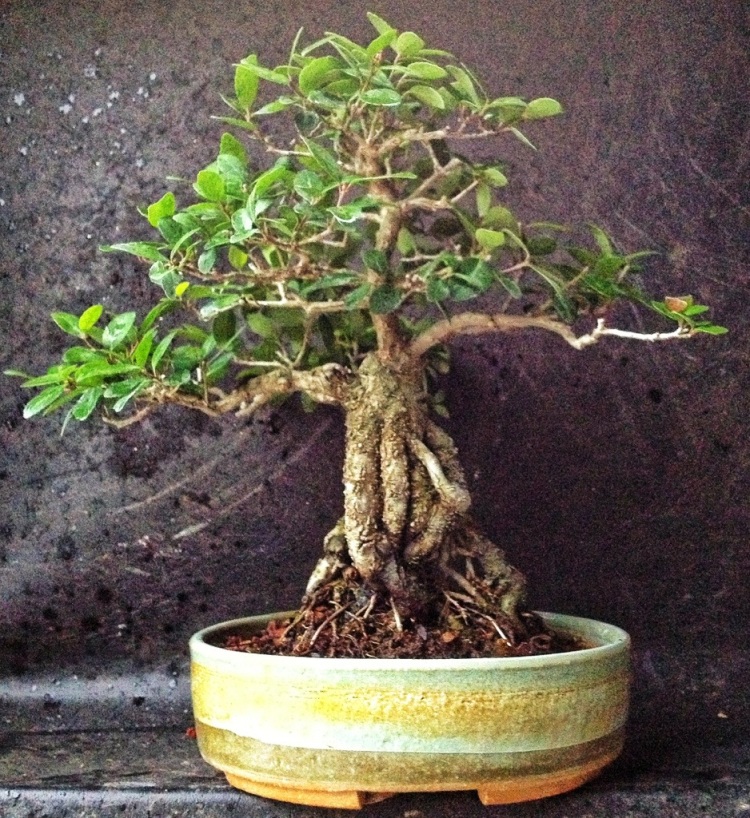 So you’re asking “what the hell is a rejuve?” Right?
As I tell each trees story I’ll explain the “rejuve” process as I’ve come to develop it for the ilex. And why it’s necessary. 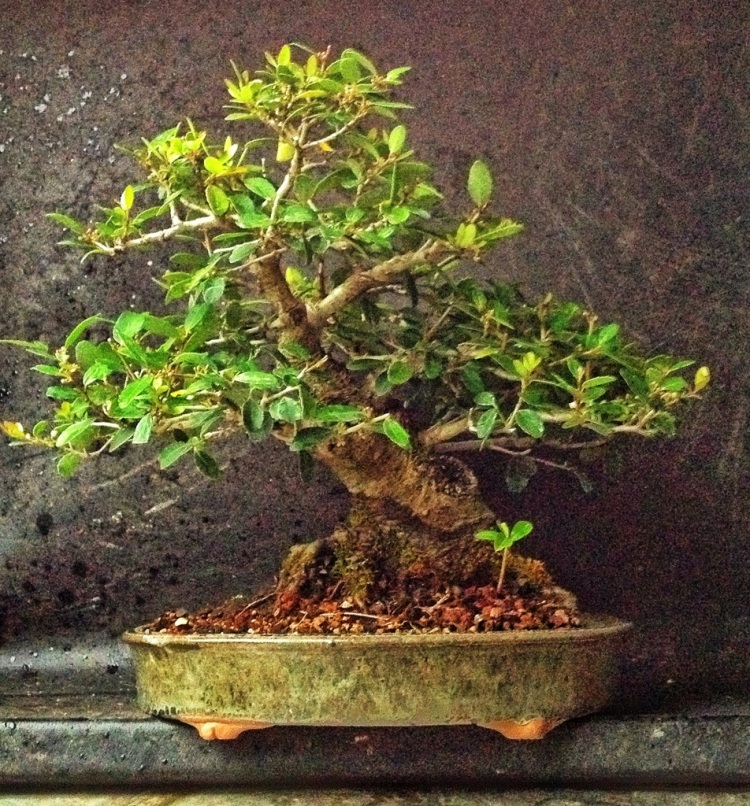 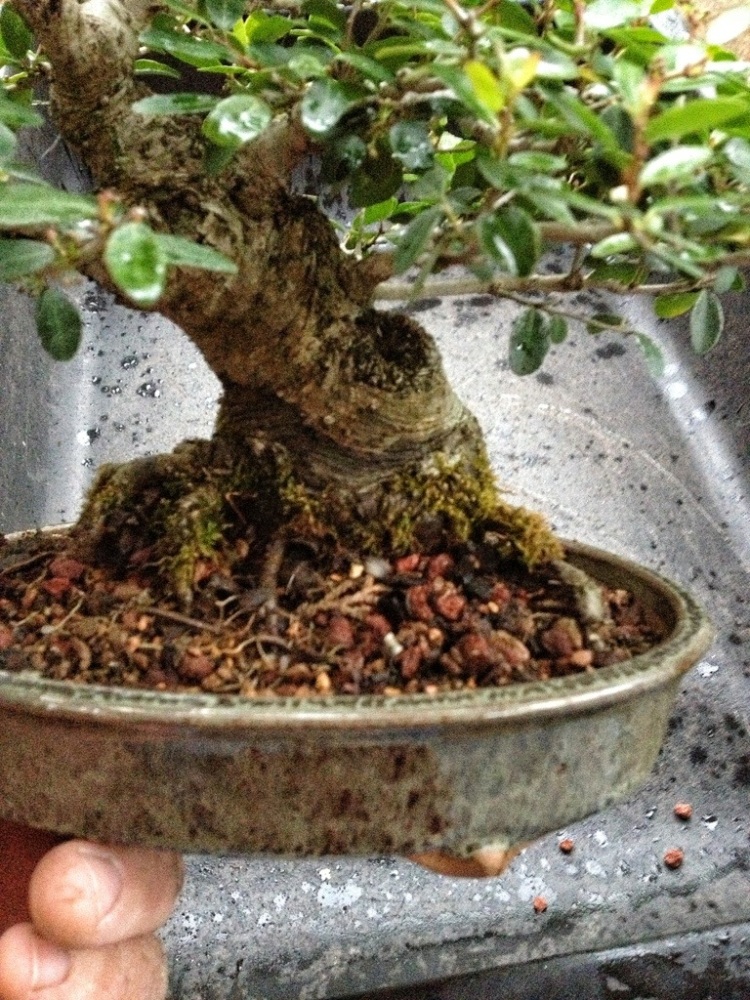 It’s in a beautiful subtlety glazed Taiko Earth pot by Rob Addonizio. It needs a repotting and some branch work.
Mainly here..

That branch is too thick with no taper.

I cut it back (blue arrow) and wired a secondary branch into its old spot (red arrow). As your tree ages, it’s important that this process is done regularly. Taper is the one of the things that give age to a tree. By cutting back and re-growing taper is achieved. 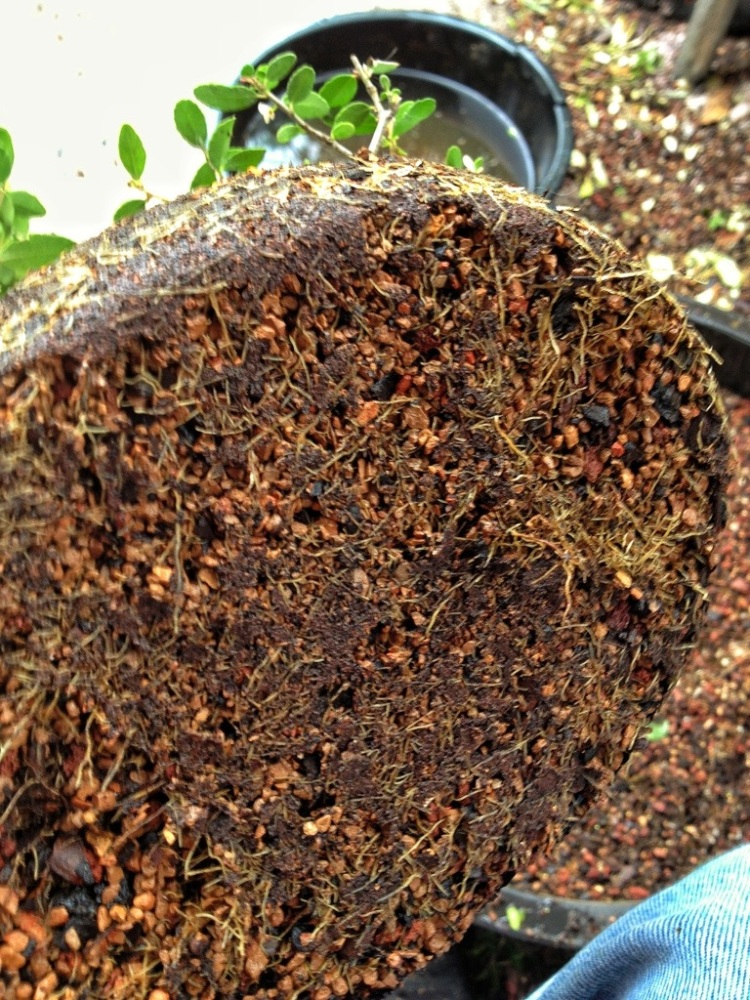 Pretty healthy looking, I haven’t had any health issues with this tree. It’s been 2 years since I’ve repotted and you can tell by the matting in some spots. Not as bad as the “old ilex” in the previous post by any means.
It’s always best to clean the pot, especially making sure the screen on the drain holes is clean. 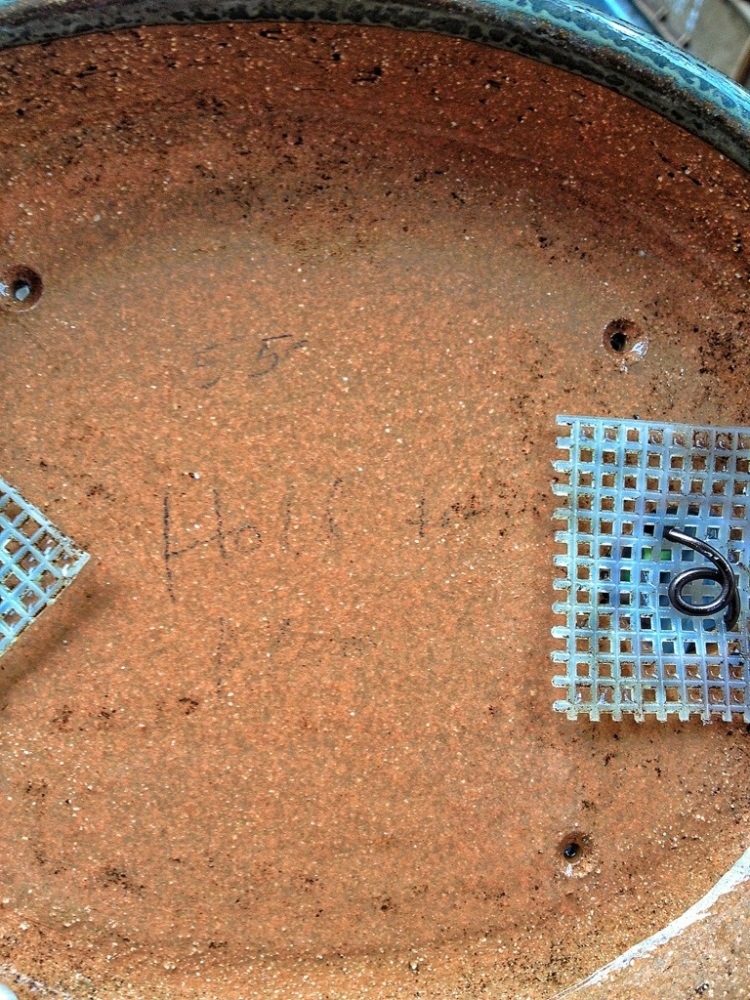 I’m gonna save all the finished “glamor” shots ’til the end.

It’s important to understand that we don’t need to be repotting our trees every year. Each time you do it some vigor is sapped away from the tree. The soil in this pic above is not showing too many roots (an ilex roots will fill the pot) 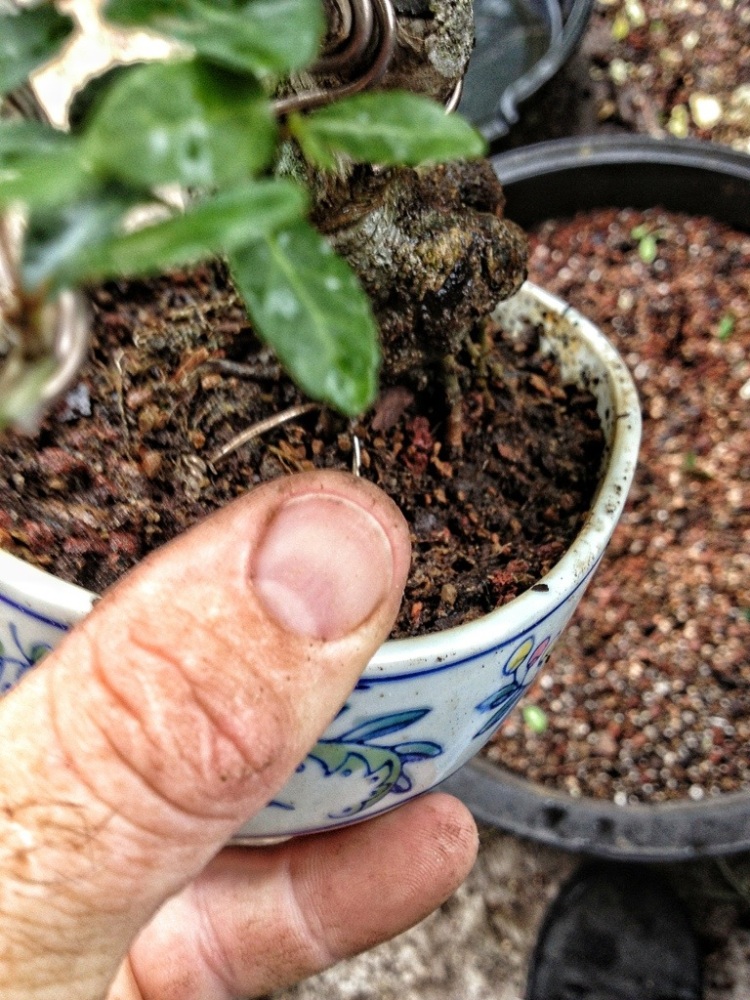 In late summer I restyled the branches
And cut out the older, over lignified branches and replaced them with younger ones that I let grow long.
This is important with ilex; as the branch becomes more woody and stiff, it loses its capacity to move water and nutrients. And the result is that branch withering and dying.
This is the first step in the rejuve process. Let it grow unrestricted.

Fertilize, fresh top coat of soil, and let it be this year except pruning.
Next….

This ilex is one of my favorite: I did not repot last year so that’s definitely on the slate today.
First, clean the moss off the trunk 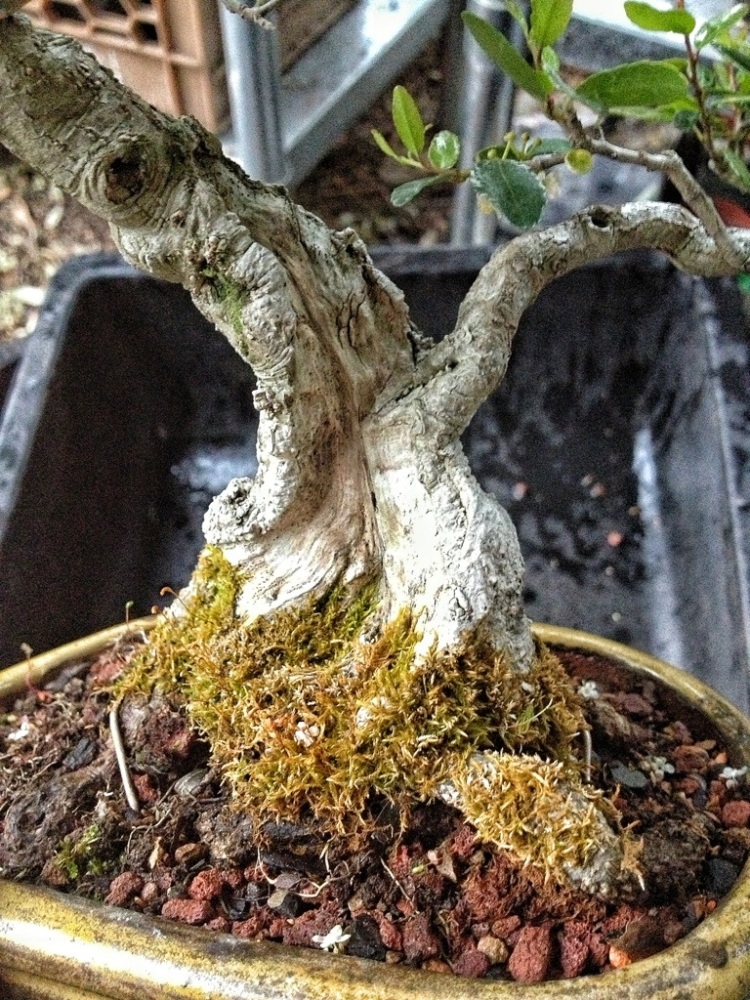 There was a nice moss layer on the soil but something removed it. I haven’t caught the beast in the act yet so I don’t know exactly what it is , but it must be faster than the cats, that’s all I have to say.
Maybe it’s the children? 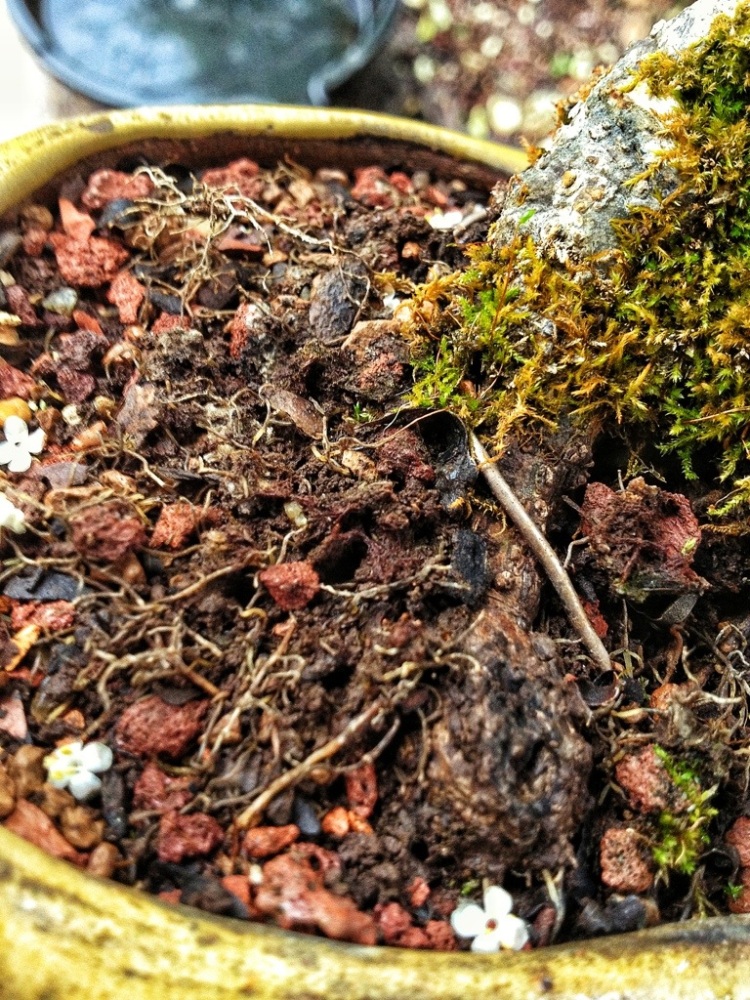 If you look close you will see the fine roots on the soil surface. This happens from keeping moss on the tree. And this is why moss is a good thing on the soil surface, especially on little trees. It allows the tree to utilize the entire soil mass where, without moss, the first 1/4-1/2 inch is wasted space.
But we don’t want moss on the trunk so a toothbrush and some water and… 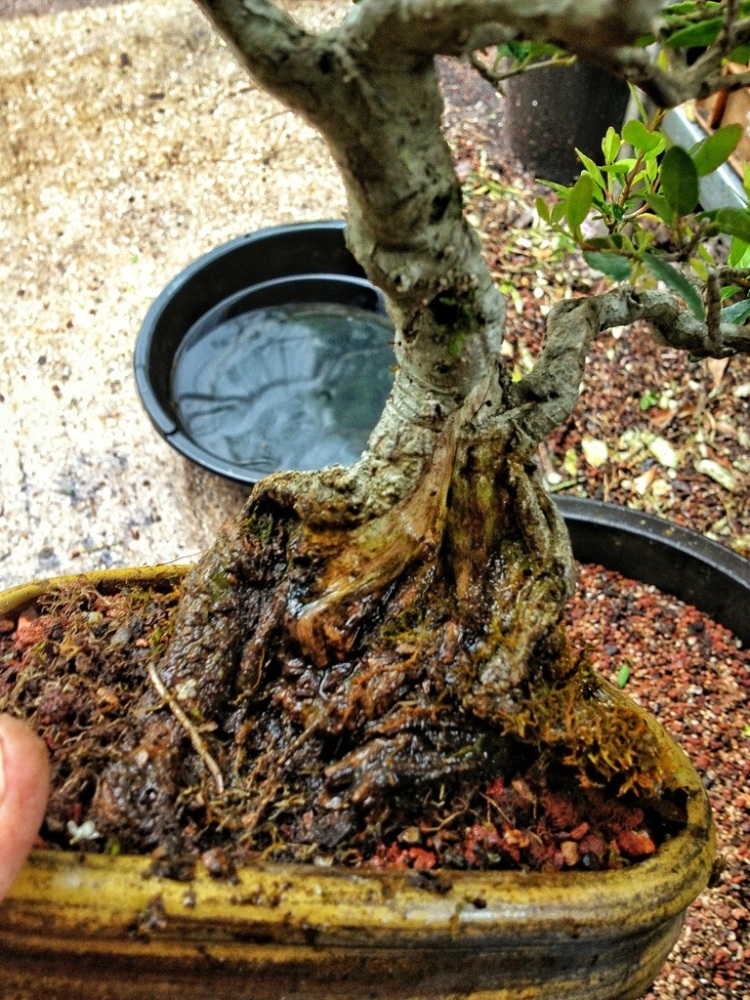 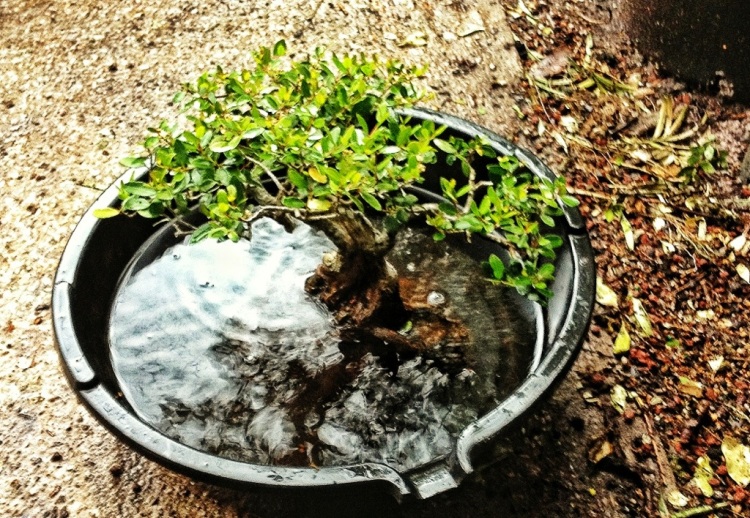 If you’re re-using the same pot, (which requires cleaning, installing new tie downs etc) while preparing the old pot and the trees roots are naked, put the tree in a pan of water so the roots don’t dry out.
And you get a cool photoshop opportunity too…

Kinda looks like a painting, no?
Do you need another tip?

I don’t like fertilizer on the soil surface, it cakes up and just looks bad. I mean, who wants to see poop on the lawn?
Just tap the pot a bit and the fertilizer will disappear. That’s also why I prefer granular poop to the poop cakes. 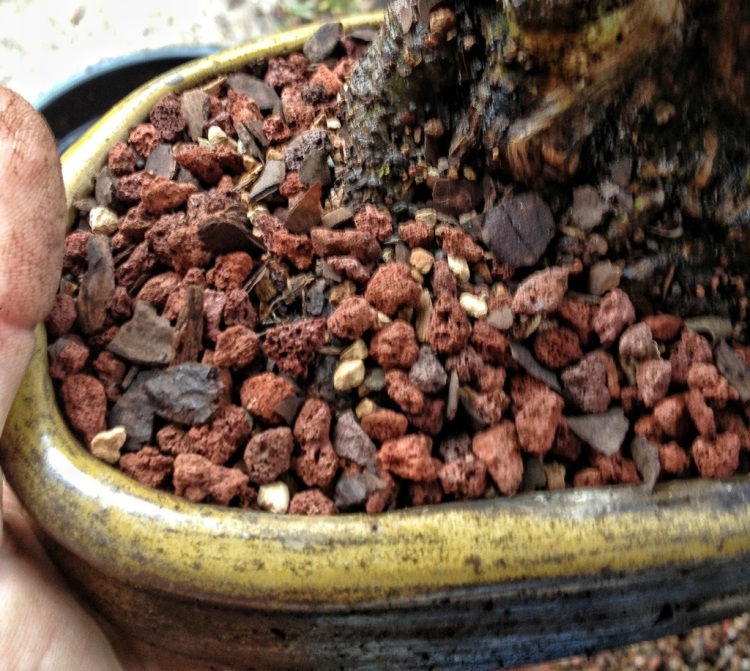 This tree is at the end of the rejuve. Last year, I repotted it into a slightly larger pot with better drainage, let it grow without much trimming, and made sure that it stayed fertilized. It has a lot of flowers so it must be happy.

And the leaves are a terrifically dark green. Coming out of winter that’s a plus.

I’m going to have to remove most of the flowers (I can hear it now “NO! Not the FLOWERS!) as I can’t wire around them.
After:

And a new pot…err, an old pot.
This is an old Korean pot that either is dirty or has patina. 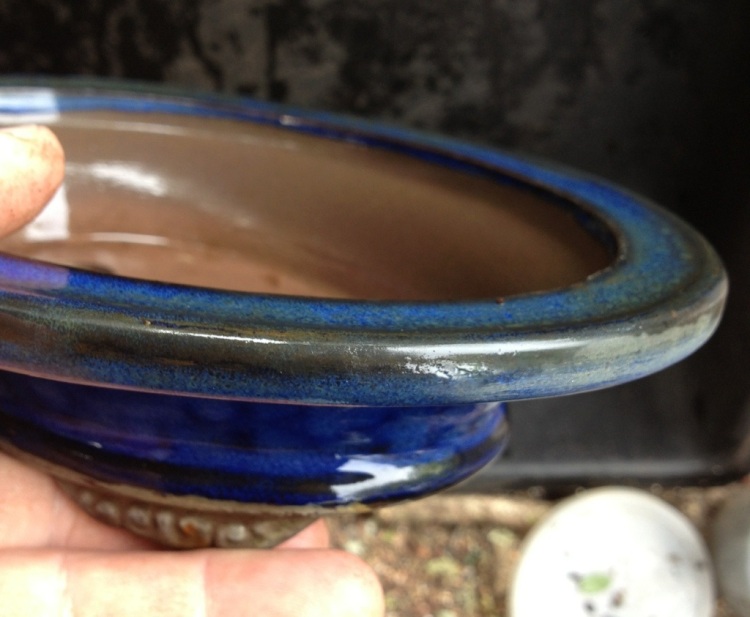 It looks good wet (and oiled up for a show) but wait until you see it dry. 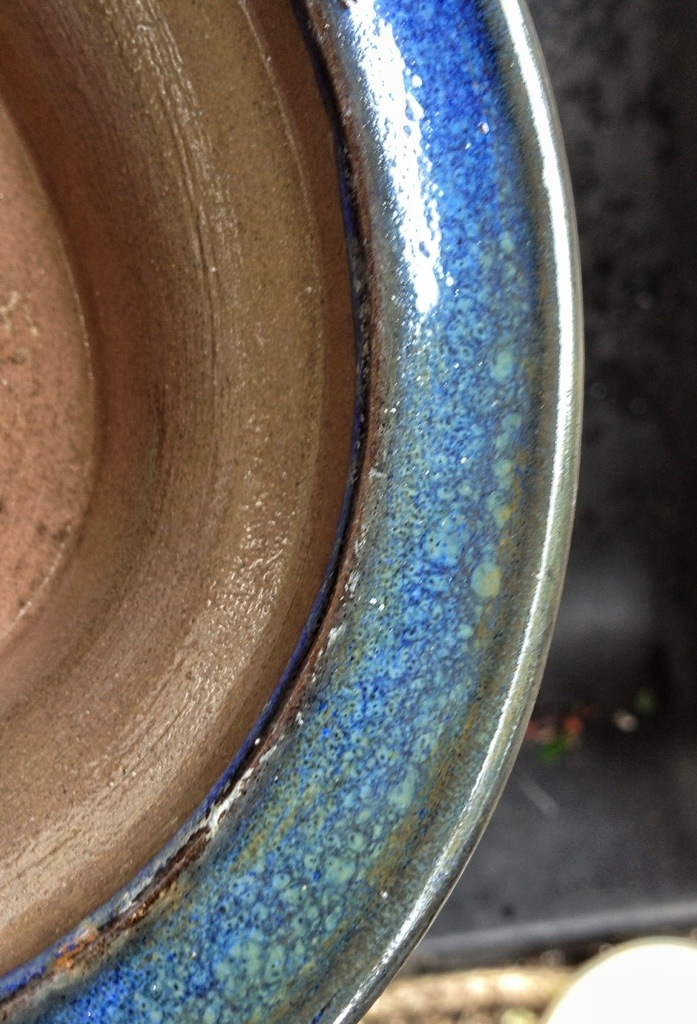 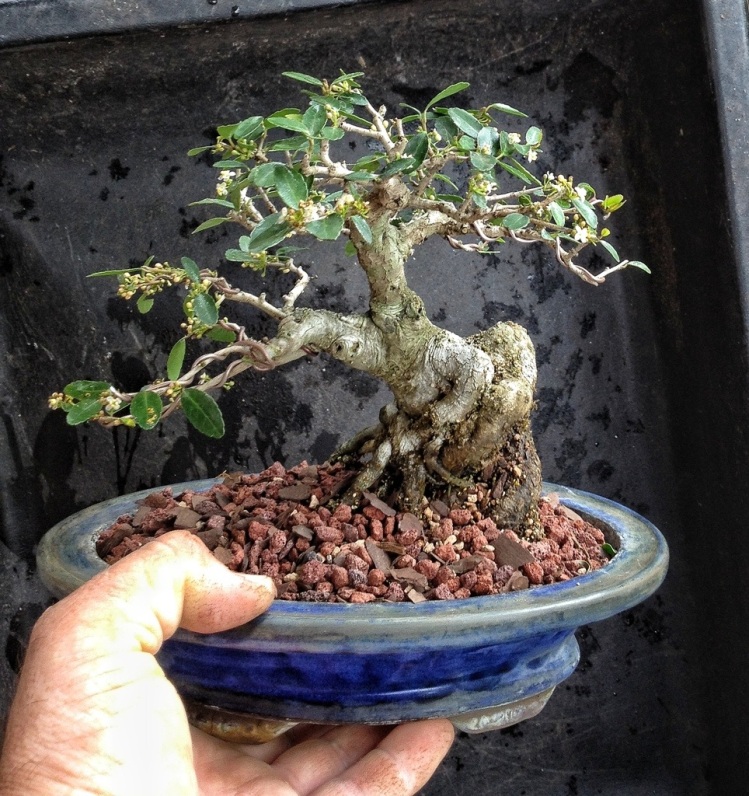 And the dry pot

What do you think? Patina?
Next tree…

Last year I watched this tree just sit. It got very little growth (which can sometimes be a blessing here in Florida, but not in this case. ) and as you see

No flowers or new growth. Time for a rejuve.
First step is a bigger pot

The roots aren’t rotting, which is good. But they didn’t fill the pot either.

This is one of my oldest ilex. I got it at Walmart as a $3.98 landscape tree in a one gallon pot. 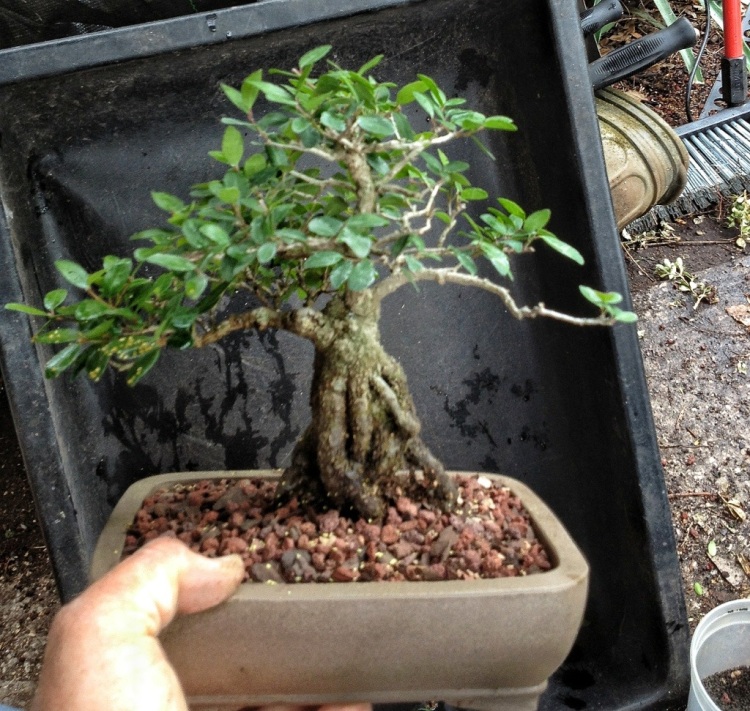 This is it’s home for the next 2 years or so.
Now for after shots… 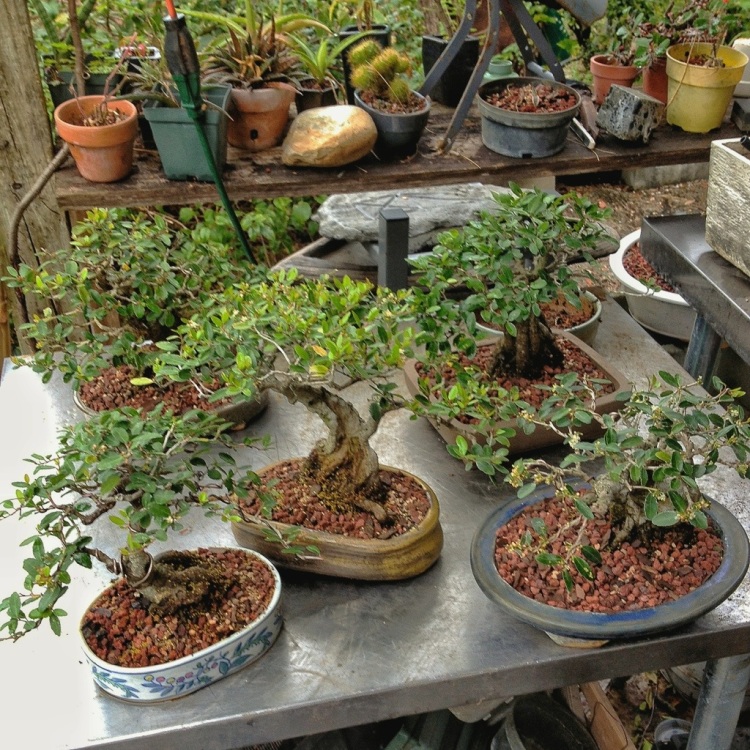 Enough fooling around! Back to the bench! Only about a hundred more to repot…….