Since the last post (clicketh hither) I’ve had some great growth. So much so that I’m glad I was wandering and wondering around the nursery looking for something to do.
If I hadn’t been looking I would have lost shape on some of these and I would have had to start over. 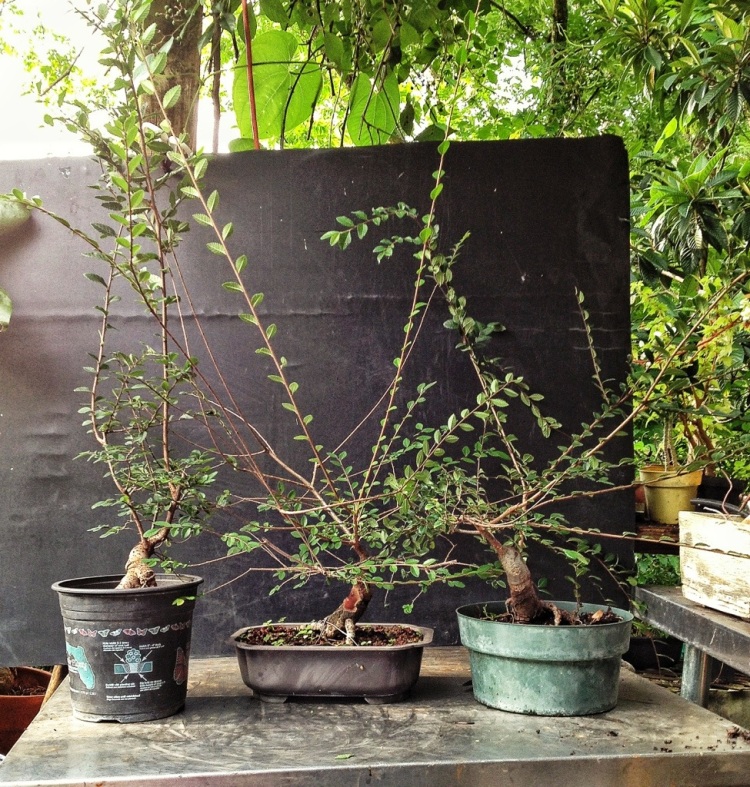 Some of the trees from that last post have been sold so I’m introducing a few new ones. The two main subjects of that one are still here though.
Here’s a new one first

Primarily I’ll be dealing with the mid-season or secondary pruning that’s required if you want well regulated growth and not wild growth.

If you look closely, you’ll see that the first and second branches are growing up.

If I don’t correct them (bad branches) I’ll have a tree with three apices and a big knot.
So it’s to be the wire then….I don’t like to wire in the summer on elms. They grow fast and wire will cut in. And wire cuts on small elms don’t heal as well as on ficus.
First some cleanup and pruning decisions. 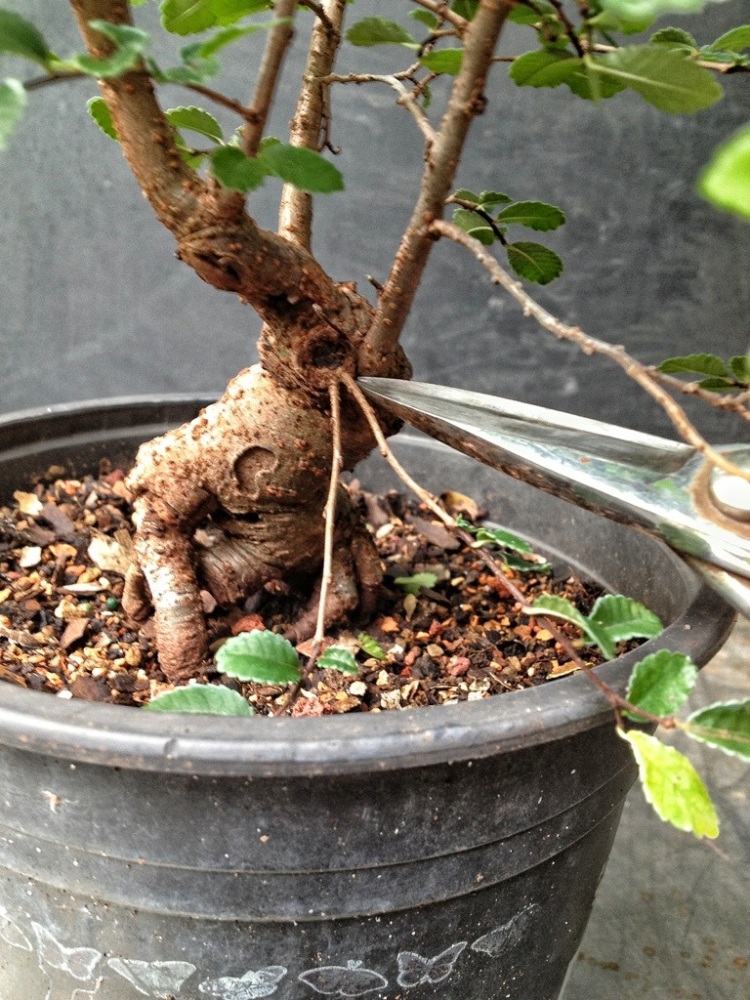 At this point I don’t need these little weak twigs (they’re in the wrong place anyway)
And now is a good time to re-cut the wound (on this particular elm. It must be reevaluated for each tree) to speed up and advance the healing process. 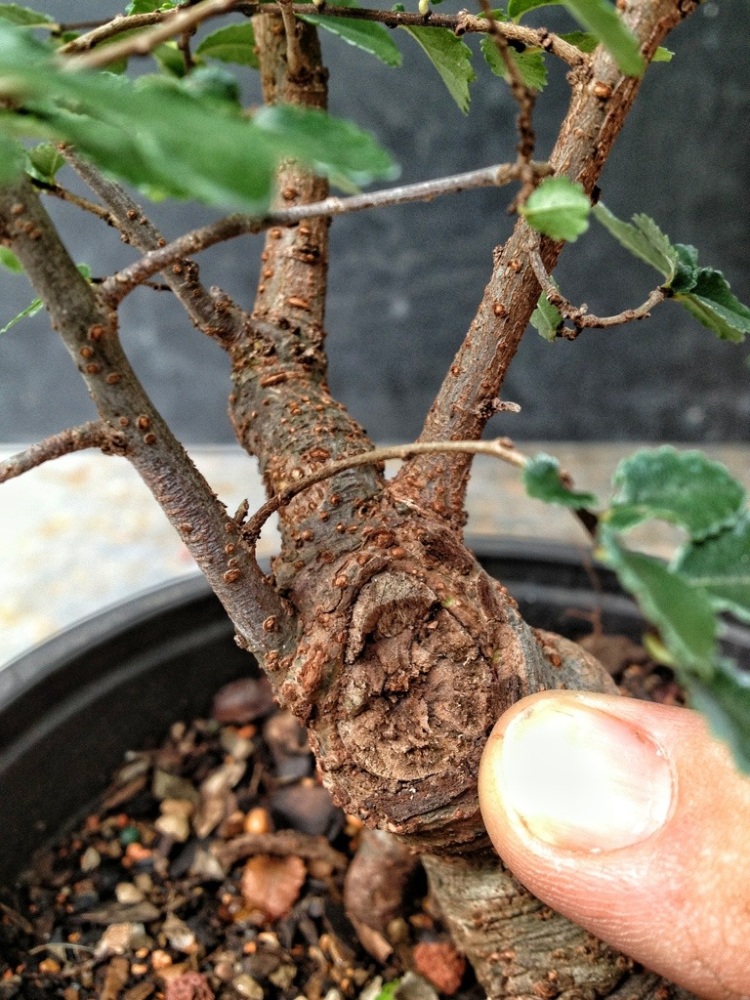 What does that mean?
Well, sometimes the callous will just slow down and stop. To reactivate the mechanism you first smooth down the deadwood and then recut the inside edge of the wound. It works.

This will be the eventual leader

I’m not going to prune the current leader off just yet. I still want some more girth on it and some more healing. This is what is called a sacrifice branch.
Okay.
Let’s cut and wire
Snip

And that’s all I’ll do on this one.
Next is the elm I chopped in the last post.

Compared to how we left it 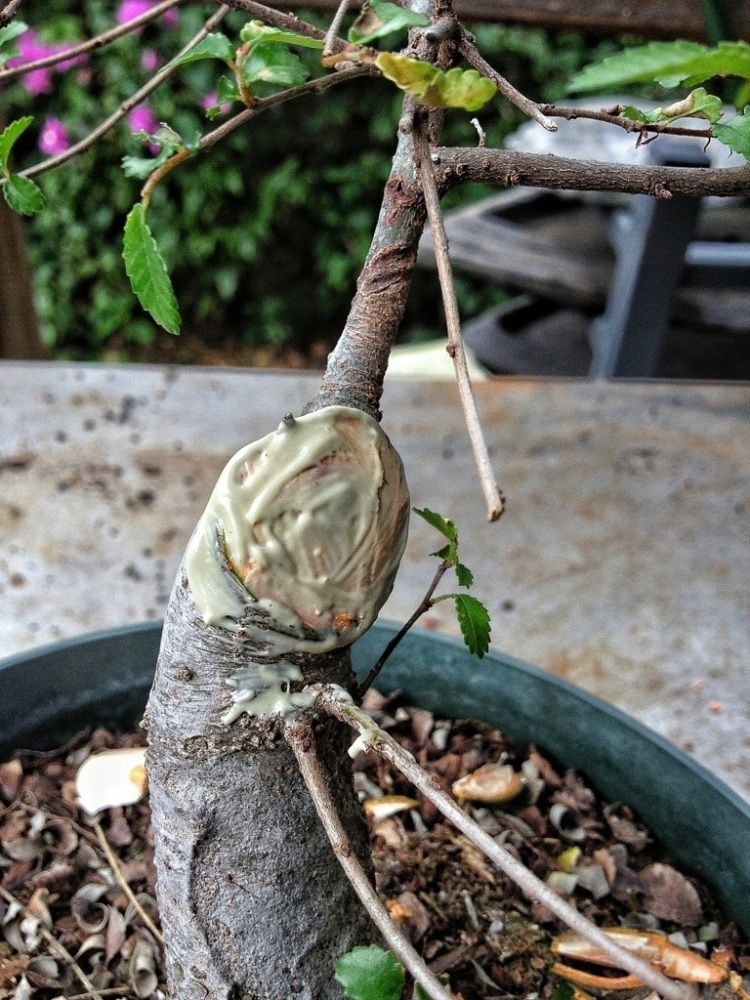 It’s like a whole n’other tree.
Them’s two twigs have all growed up

It’s funny, the one on the right in the first pic looks bigger yet it was the left one that is bigger now.
Or, as I’ve said before, I’m delusional.

Too bad for righty though, he must be removed 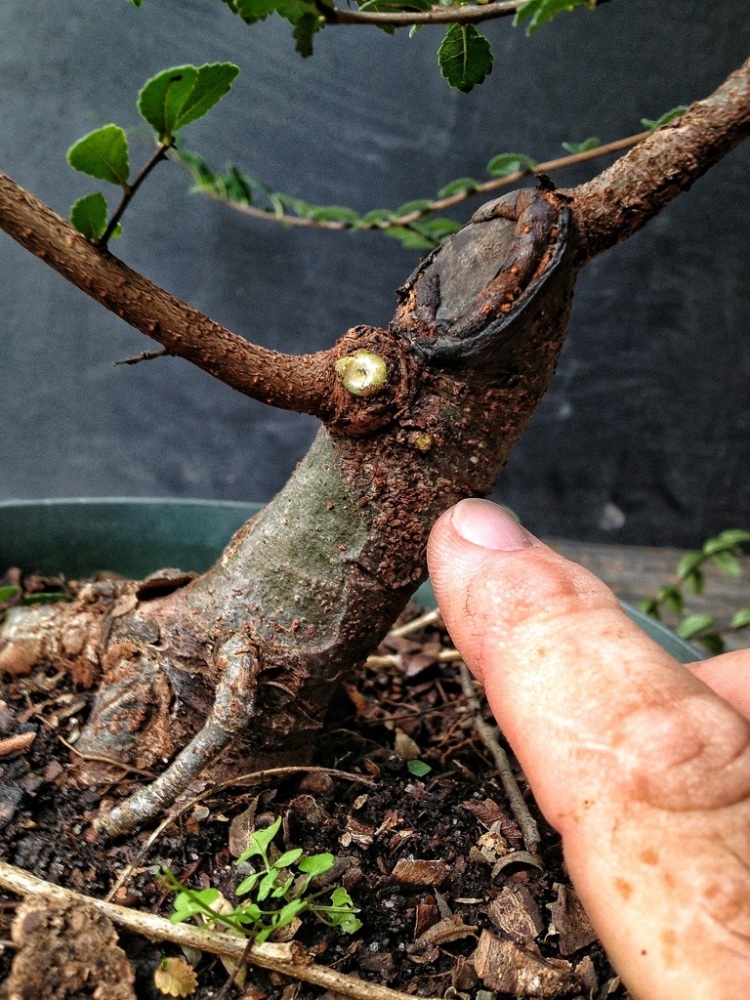 And since I’ve achieved the thickness (in a few months!) I want for “numba wan branch” I’ll cut it back too. 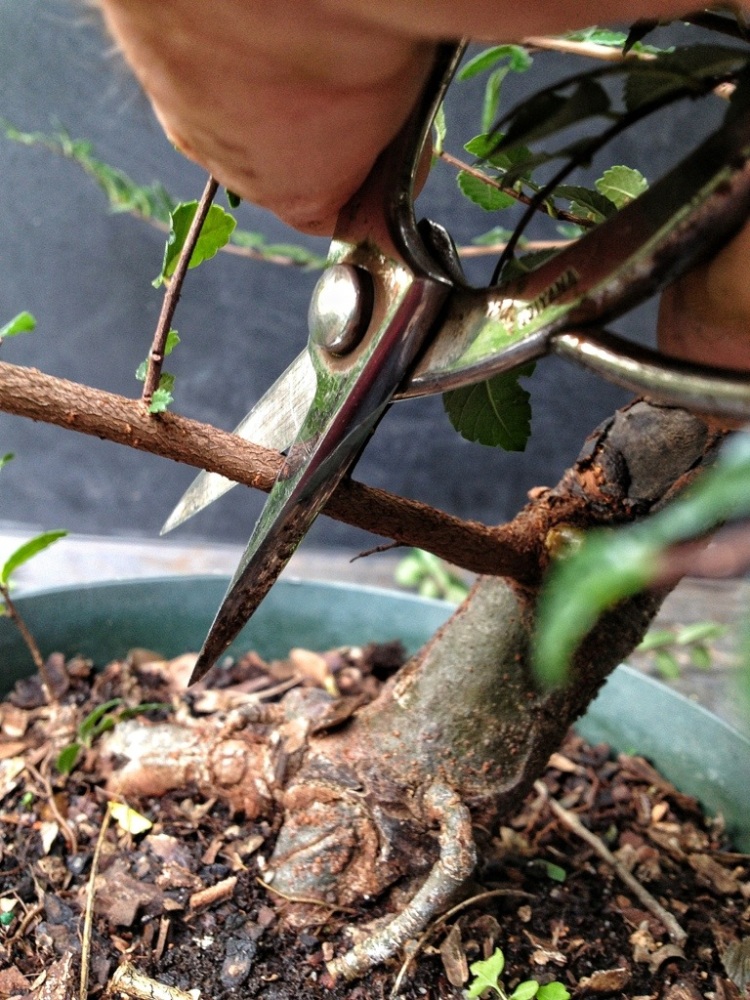 And I think I’ll cut the trunk to a line too.
Why am I doing that with this one and not the previous one?
The growth is so much more vigorous, I just feel (and it is pure feeling. Like a Jedi) that this is what needs doing now. 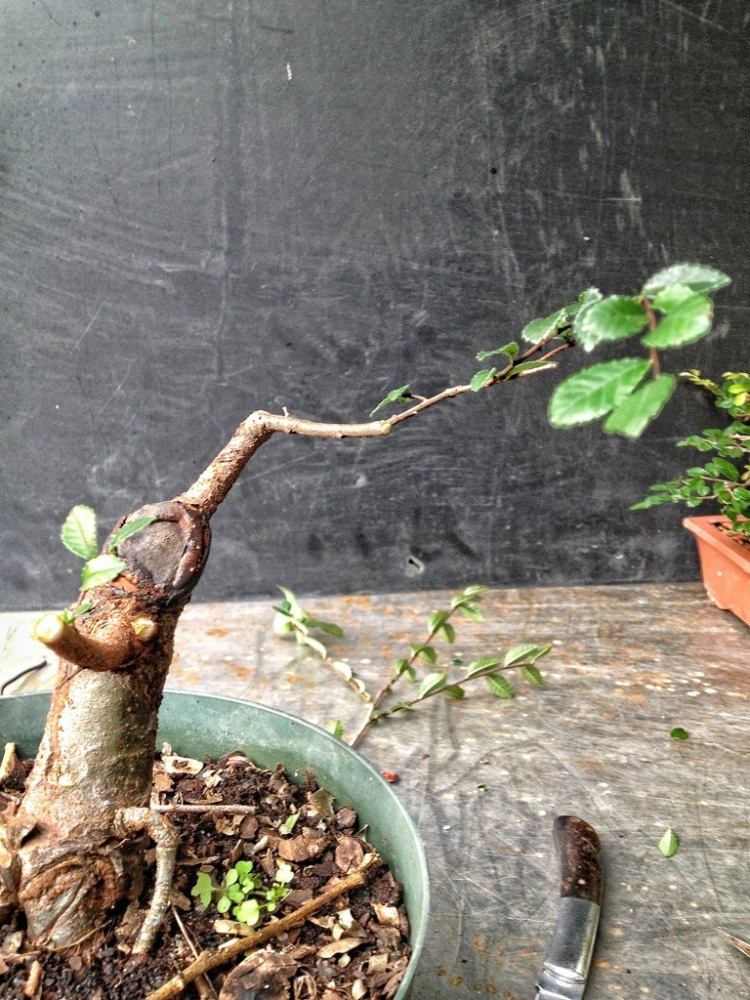 Now for some wire.
One bad result from a trunk chop is that the angle of the new leader is usually too extreme and or leaning too far forward.
That’s why we use wire I guess

Better right?
At this point in the narrative I would like to point out that, even though the leader has been wired and bent, and you cannot see my hands, I promise that I used two hands while bending.
In the next two pics. 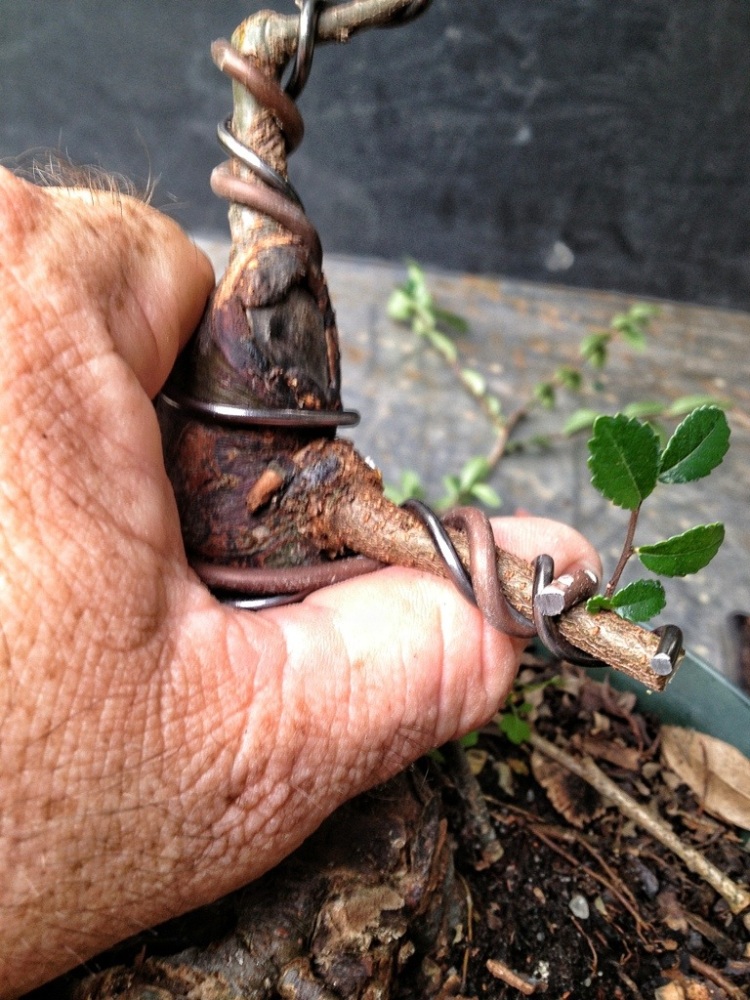 I will adamantly assure you that, in the bending process, I had two hands present at all times on the branch in question.
But, since I have only two hands and no assistants or apprentices, I could only take a photo with one hand at a time on the branch. The other hand held the camera ( I am taking a correspondence course on telekinesis and soon all my branch placement will be done by mind power alone. It’s a pay-per-increment class and the last installment of the curriculum will reveal the final secret.)

And since I’m not a web designer with fancy photoshop capabilities, you will have to take both photos and, in your imagination, pretend I’m actually bending the branch with the proper and correct bracing using two (2) hands.

Seriously though, bend branches with two hands. I’ll show you how in an upcoming post called
“Wiring for fun, profit and effect”. 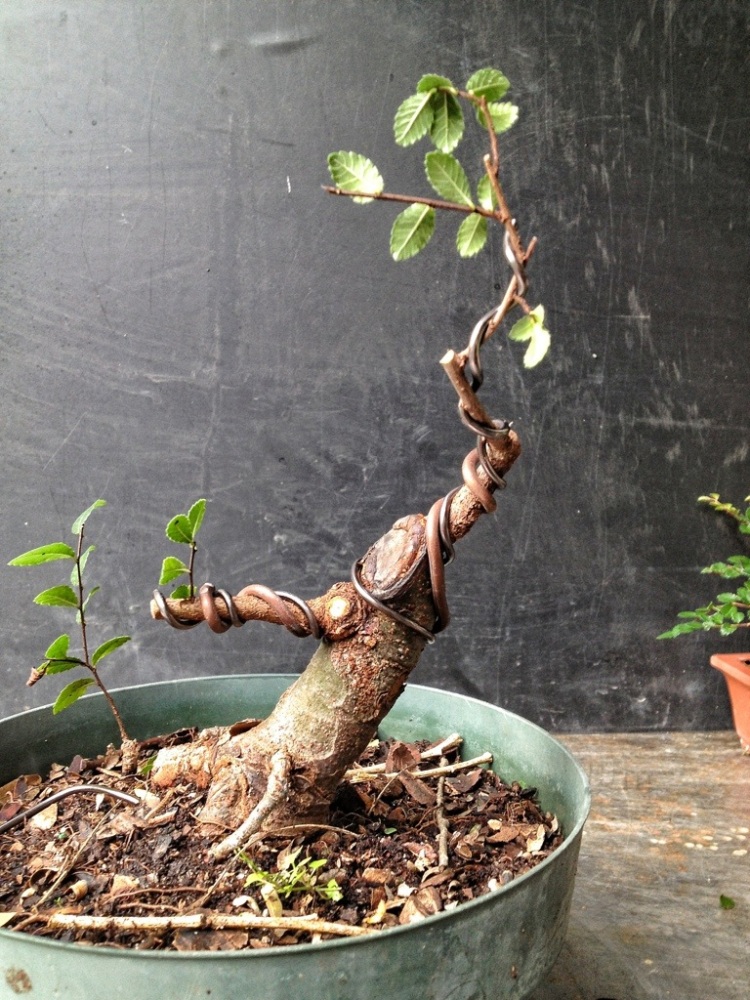 The next tree was one I was going to use for the original S-curve post but didn’t, for some reason. Maybe I am a psycho, er I mean psychic, after all

I chopped this one and potted it into the training pot last year.
A little wound work 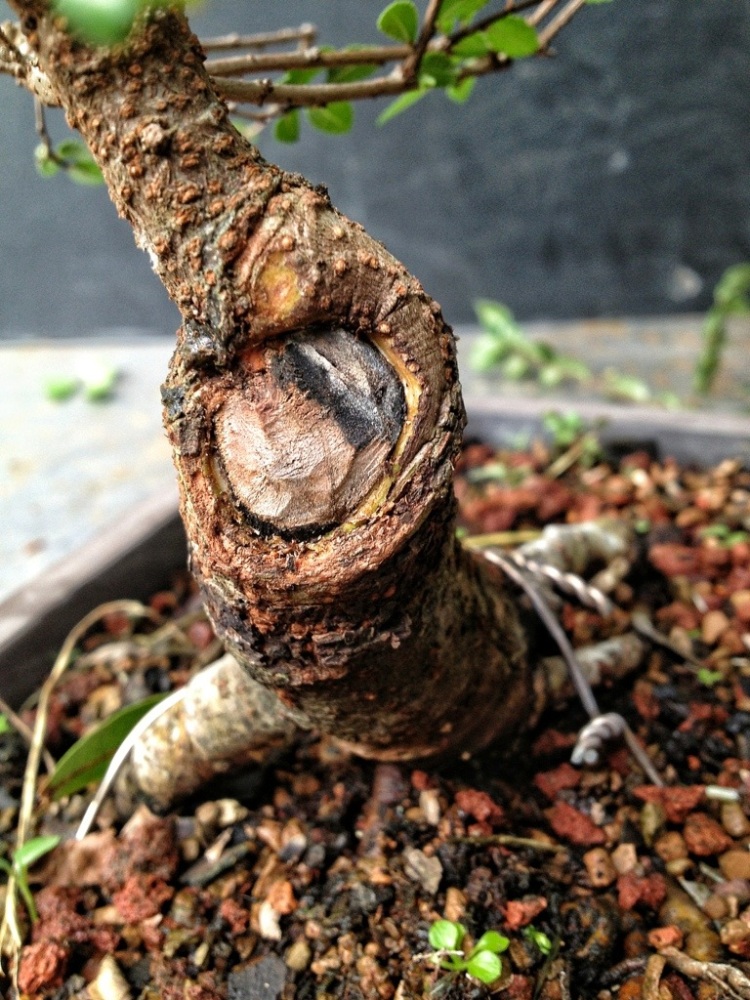 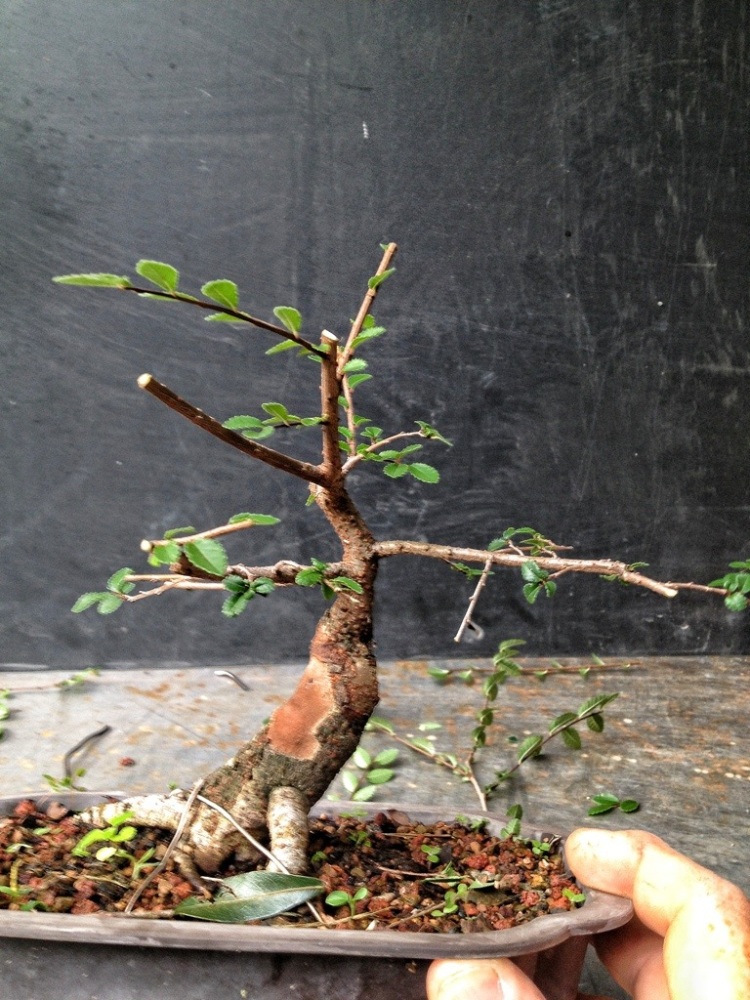 Some wire and two-handed branch placement

And Bob’s your uncle!

And lastly, if you remember this tree

I’ve let it grow, unwired it, cut it, wired it again and trimmed it twice since the last post.
No, really.
See-

The branches need thickening but it’s still developing beyond expectations.

That’s all for now, I think I’ve made enough of a mess 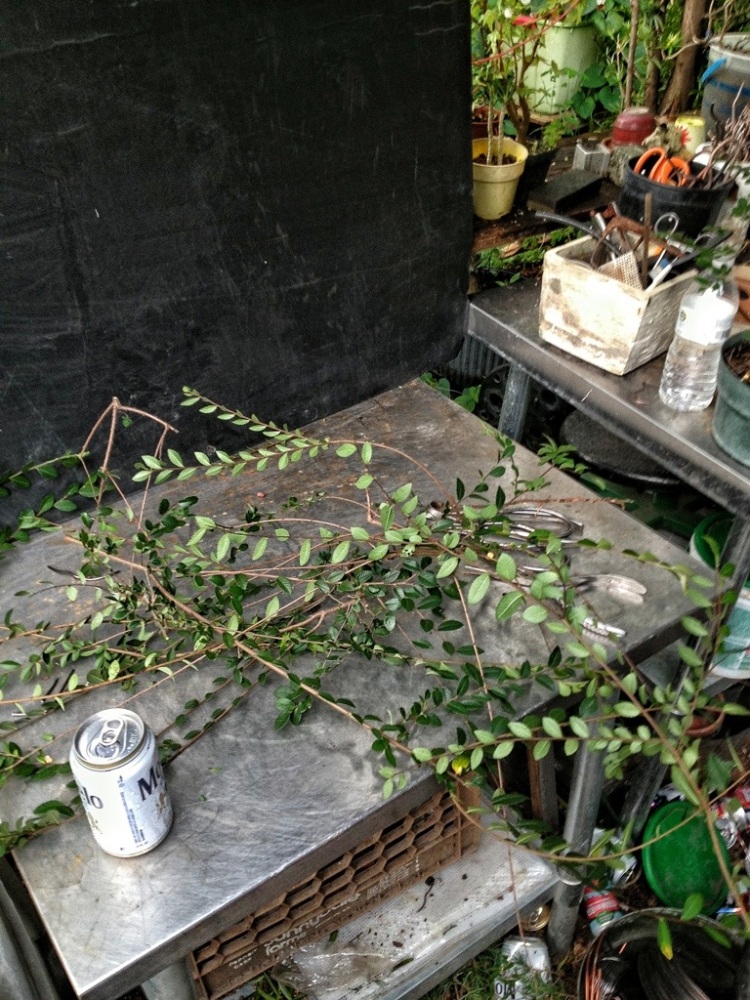 As a parting shot I’ll again (Jeez, he’s always showing off this tree, gimme a break) show you my favorite little elm.

I’m proud to say that it was an S-curve.