I Choose my weapon,
This is still sharp enough, I hope 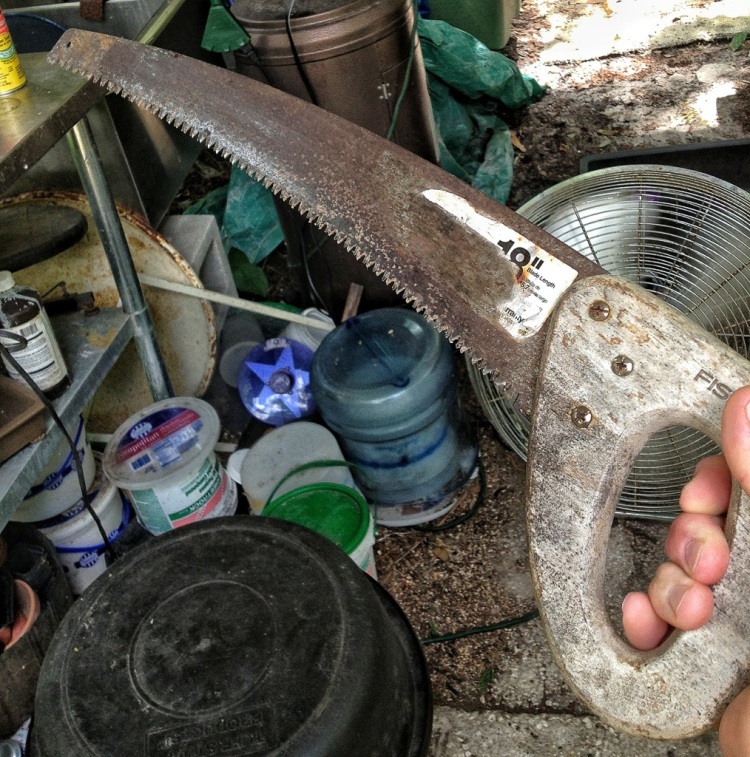 Verdant and growing on both sides: The Greenhouse

What a beauty!
He doesn’t want to leave his lair. He’s holding tight to the ground 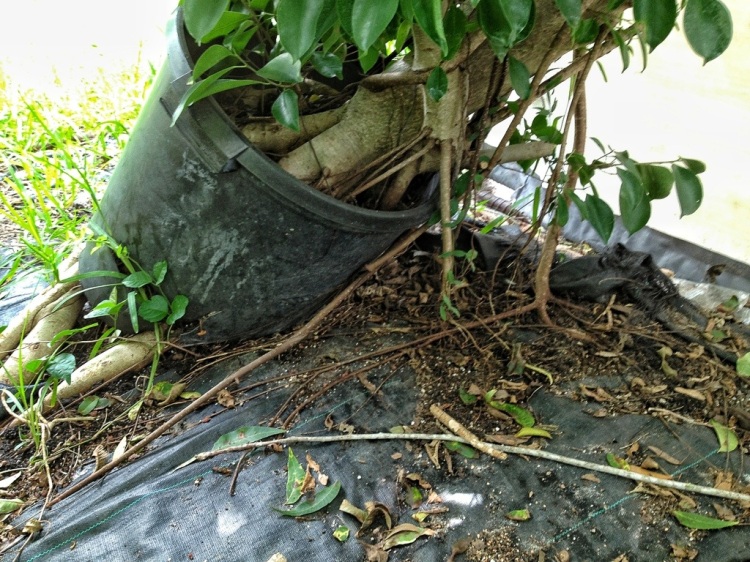 Ficus microcarpa. Though it looks like macrocarpa with those big leaves

I think the pot has given up the ghost 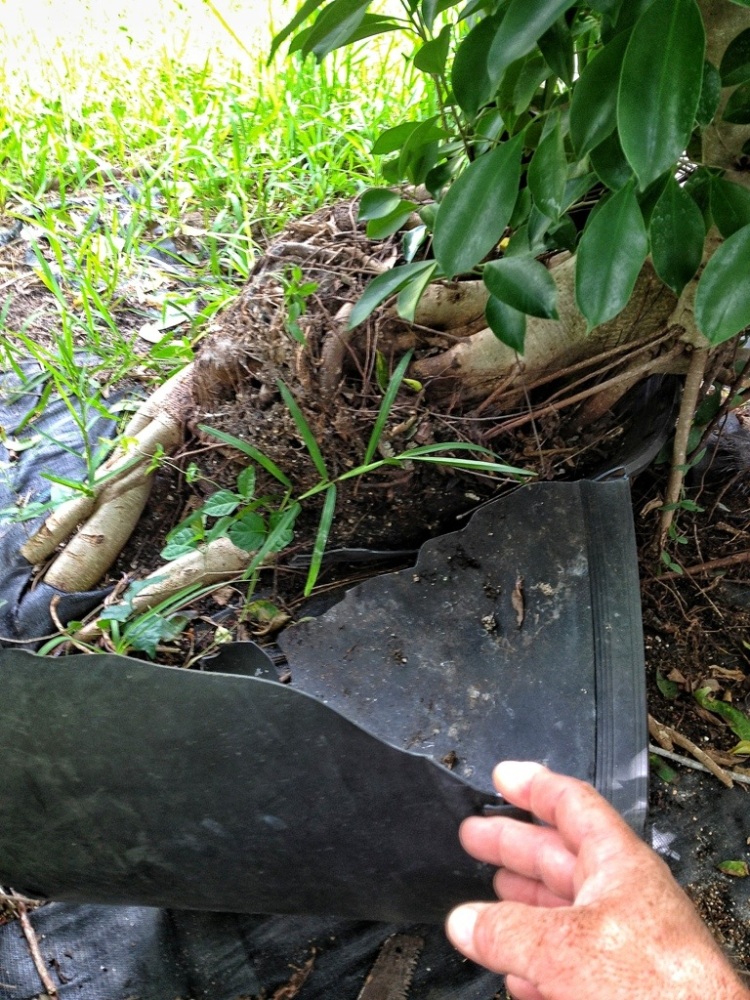 I got this tree from Ray Aldridge, proprietor of Bonsai World in Windermere (no longer in business I’m afraid. In fact, he gave the tree to me when he was closing up shop)
It was a little smaller then.
But I thinks it’s been 8 years or so I stuck it in that spot.
Let me set the scene:
It’s Sunday, high noon, August, Orlando Florida summer with 100% humidity.
Last night I went to Soldier City Saloon in St. Cloud, FL to watch a friend’s band, Papa Wheelee. We got home at 2….ish
They put on a spectacular show (its a cover band) and the bar has cheap drinks.
My only complaint: the band could be louder, turn it up to 11 guys 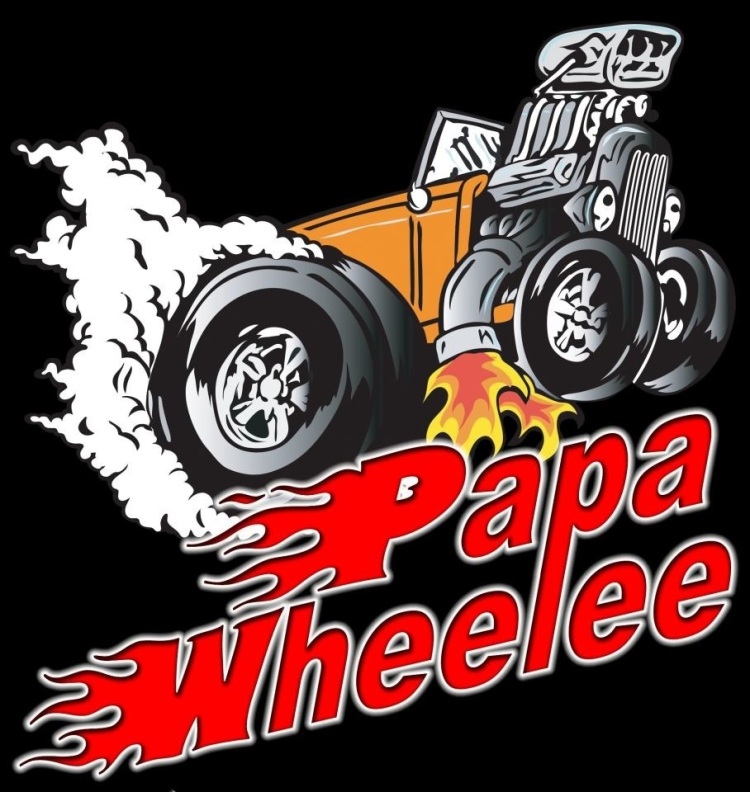 My ears just weren’t bleeding enough after the show.
I was a little wobbly, but I blame that on the rum, bourbon, beer, Irish car bombs etc.
And that’s is why I didn’t start extracting Da’ Beast until noon.
I should’ve waited.
Now, I know I won’t be believed but, generally, I don’t get hangovers.
I didn’t have one when I woke up at 9:30.
Or when I walked out and prepared the implements.
After this cut though

My head began to pound.
Needless to say, it was not fun.
But, I am a bonsai warrior. The trees must be styled, collected, repotted, wired; there is no reclaiming a wasted today.
And today is the day I had planned on this work.
Back to work Adam!
The root mass

Look at all that space.
It’ll fill up in a minute.
And now, so I can lift the damn thing, I’ll do some cuts. 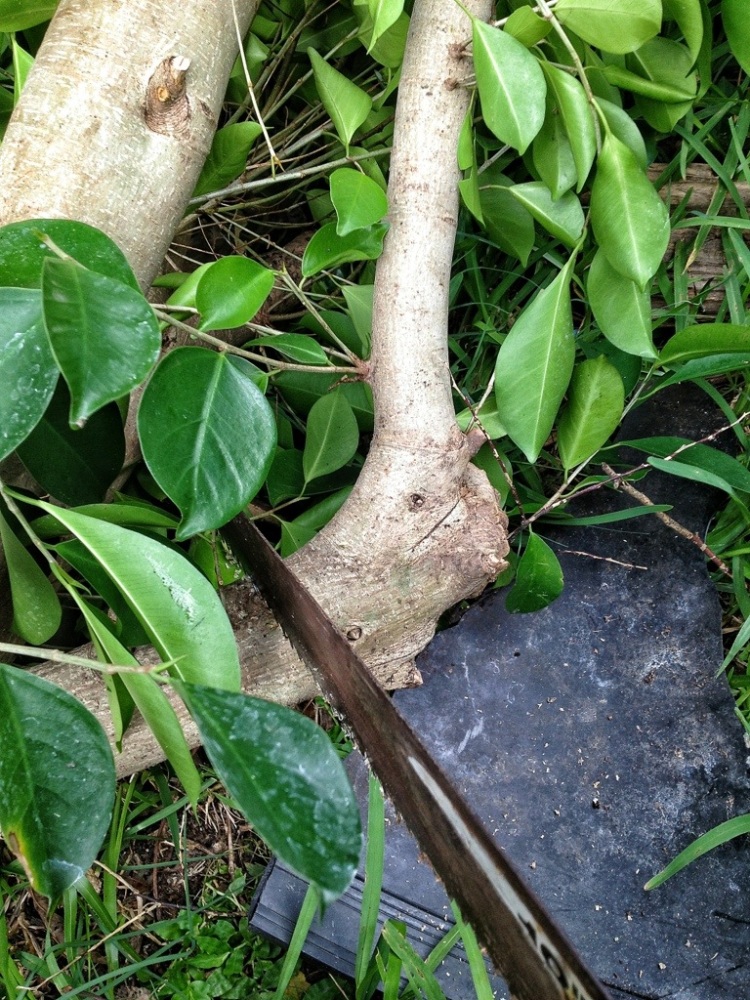 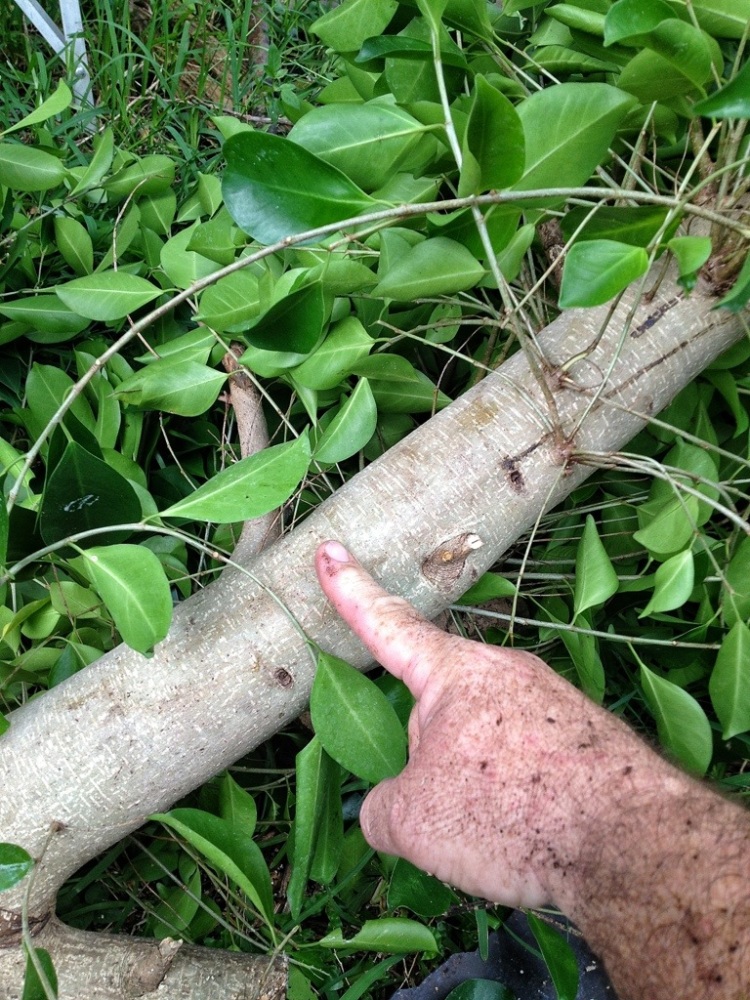 These will root, hopefully. 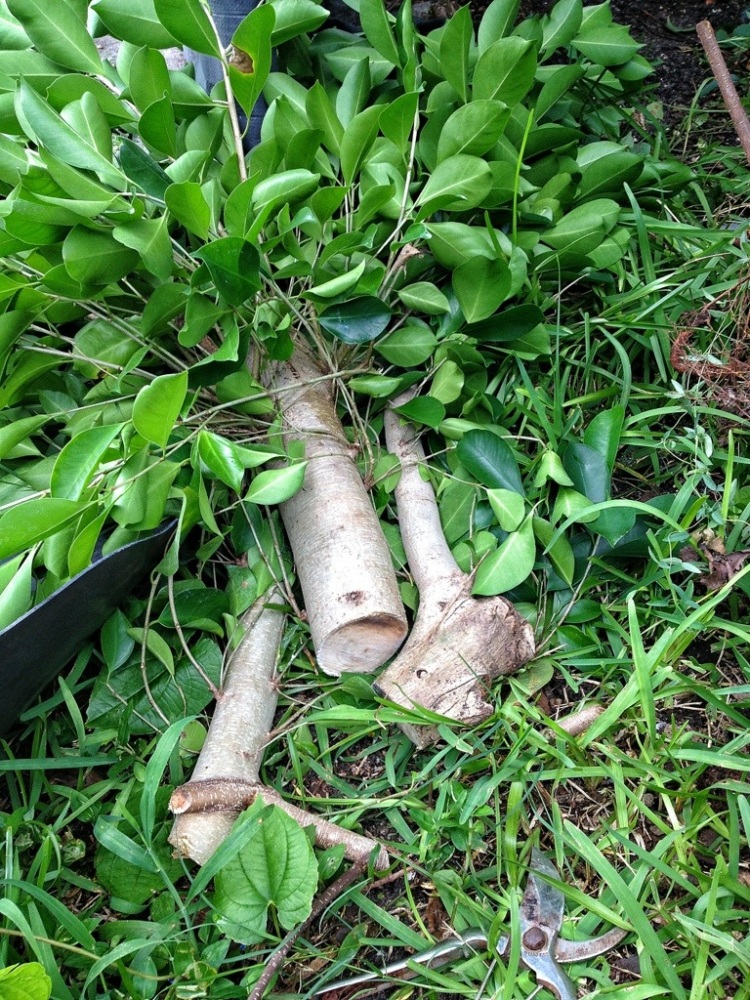 Yeah, right.
My brains may be addled, but not by that much.
To The Nook! (With electricity and reciprocating saws and powerful fans to cool me off. Not to mention a roof and the shade that entails)

And a scant few minutes later…

Now it’s up onto the operating table

A few more cuts, precision ones this time, and a pot and some good bonsai soil, and Bob, will, indeed, be your uncle.
This whole structure has to go, branches, aerial roots and all. 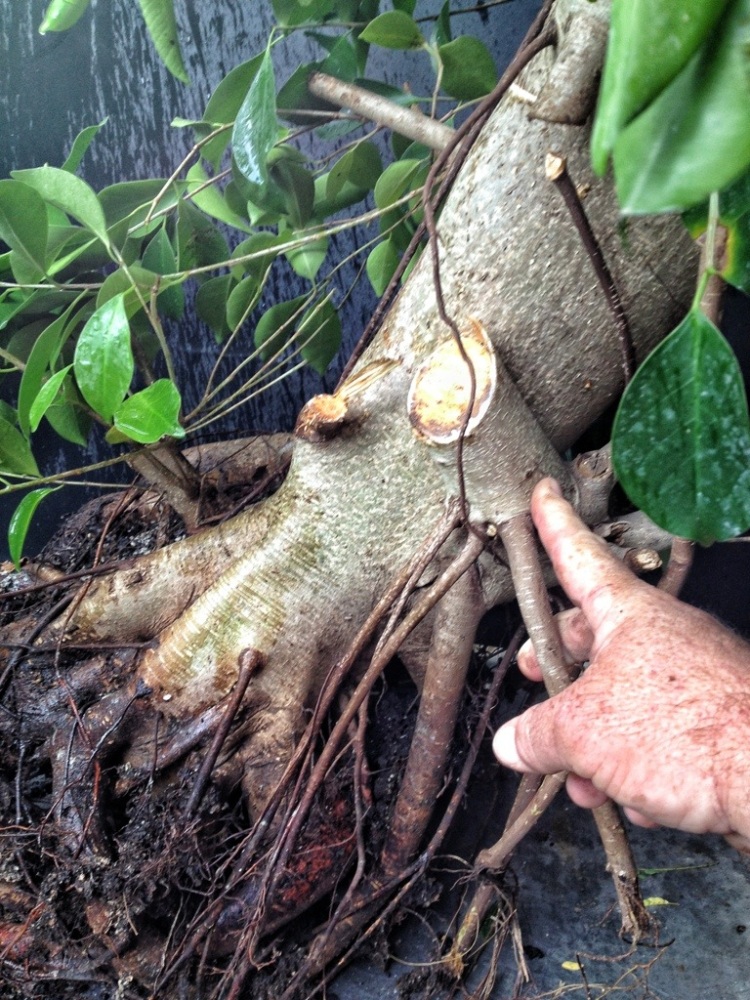 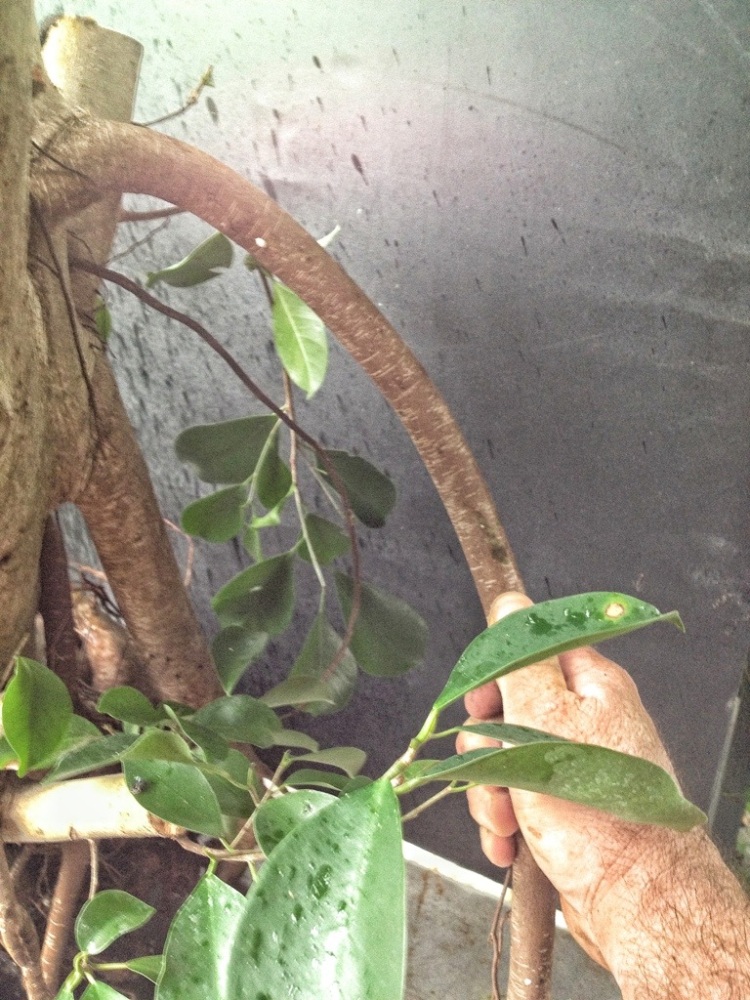 And the unnecessary ones from the bottom 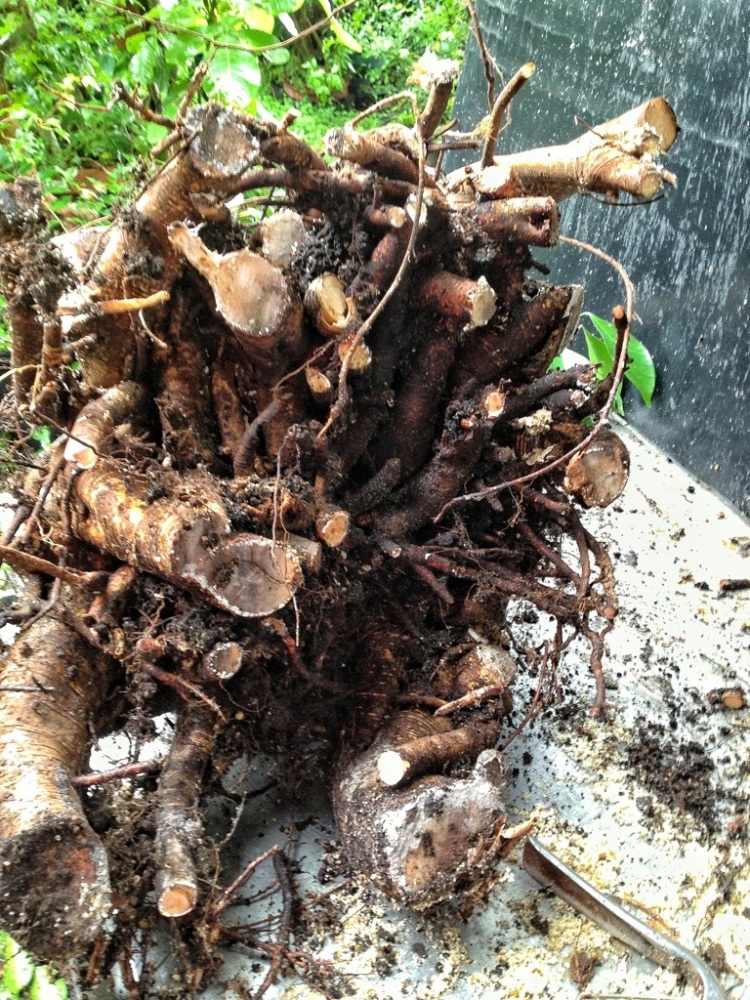 And that’s the tree

One big chunk of ficus log.
A good training pot for a tree this big is a mixing tub

I drilled a multitude of holes for drainage and I’m using my standard bonsai mix.
For my European brothers, I give you the width in centimeters

Close up of the trunk and nebari 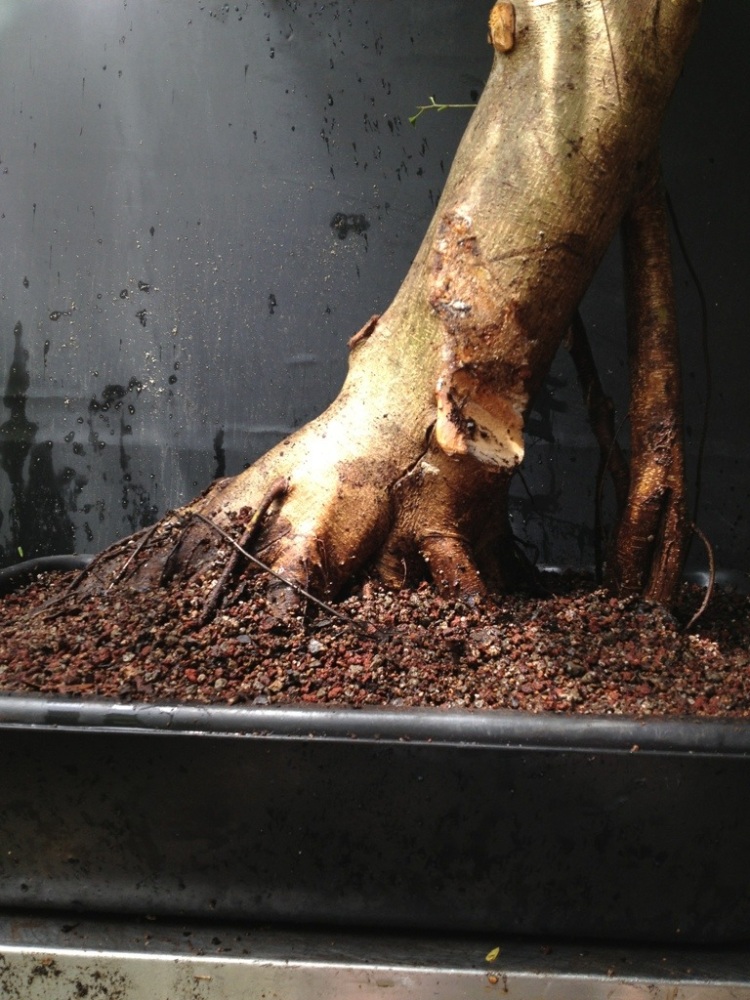 Not much left is there? No branches to wire, no deadwood to carve.
I’ll have to use my….IMAGINATION…
I have some sketches.
Beginning

Obviously what I’m going to draw may or may not actually happen. It’ll be close though. I need branches at the arrows 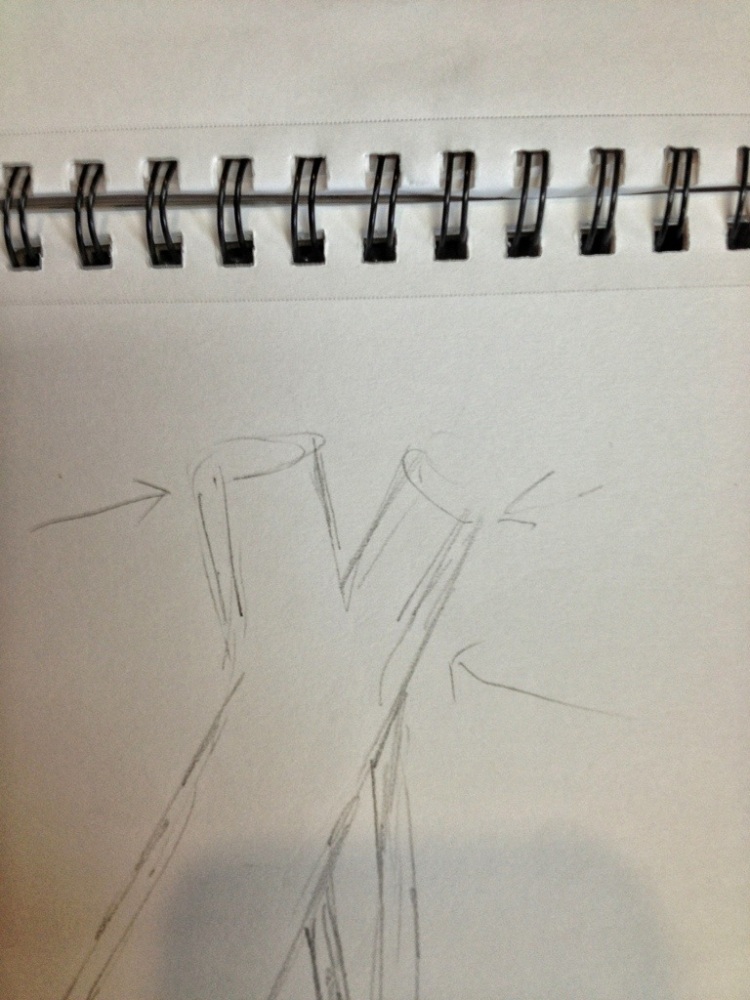 How long will this take?

I will guesstimate (optimistically) about 2 years for the main branching to be in place and about 5-7 years for maturity. 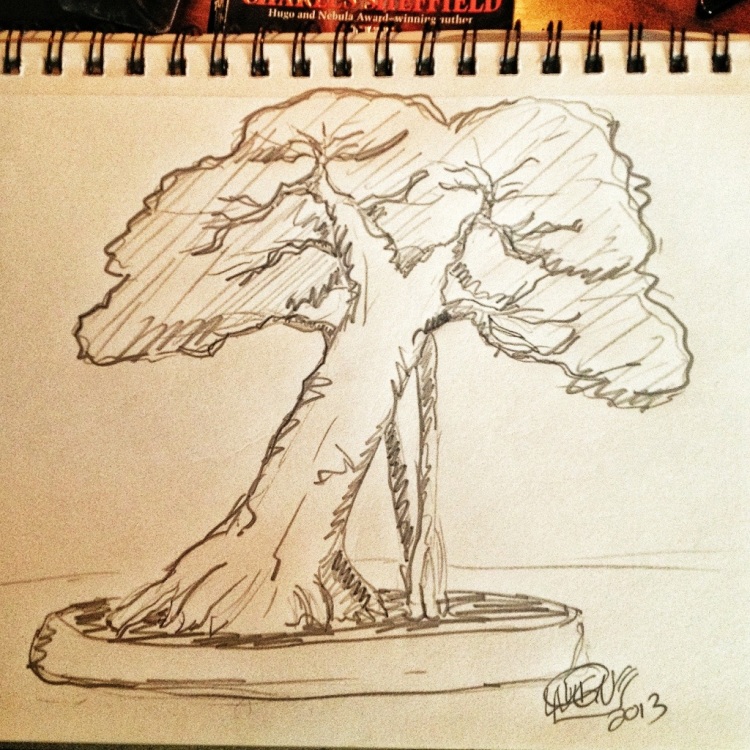 Anyone wanna bet?
I’ll shake on it 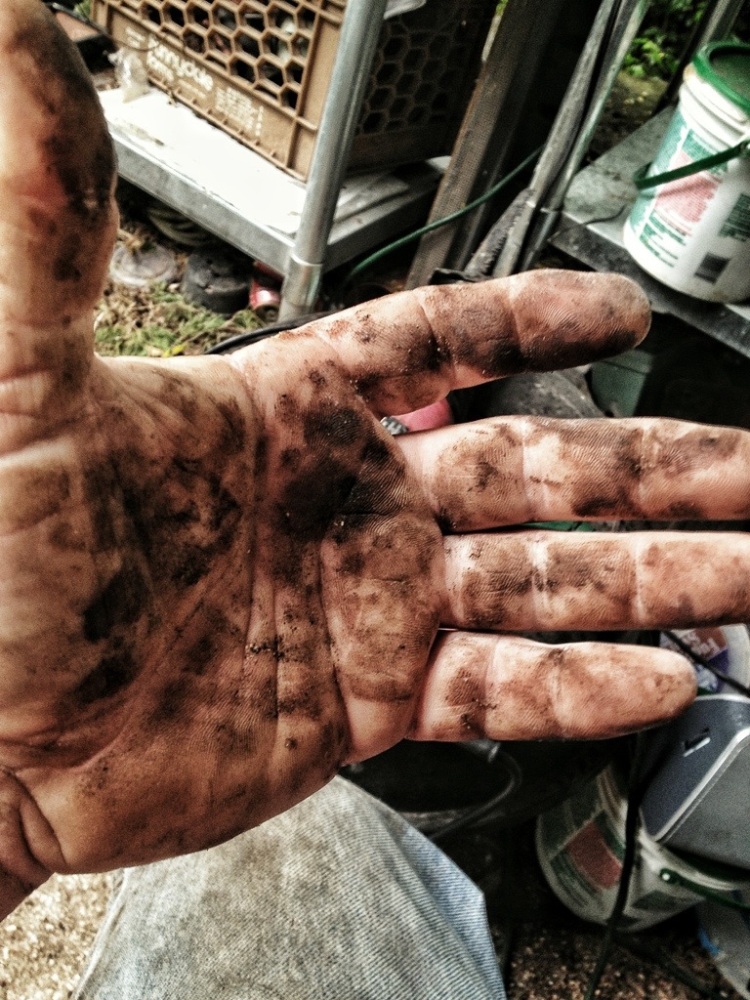