Recently, at Wigert’s nursery, I had the privilege of teaching a carving class to his students.
I didn’t get a chance to take many pictures but I was able to chronicle most of the initial carving of a taxodium distichum (bald cypress).
The tree belongs to Brad 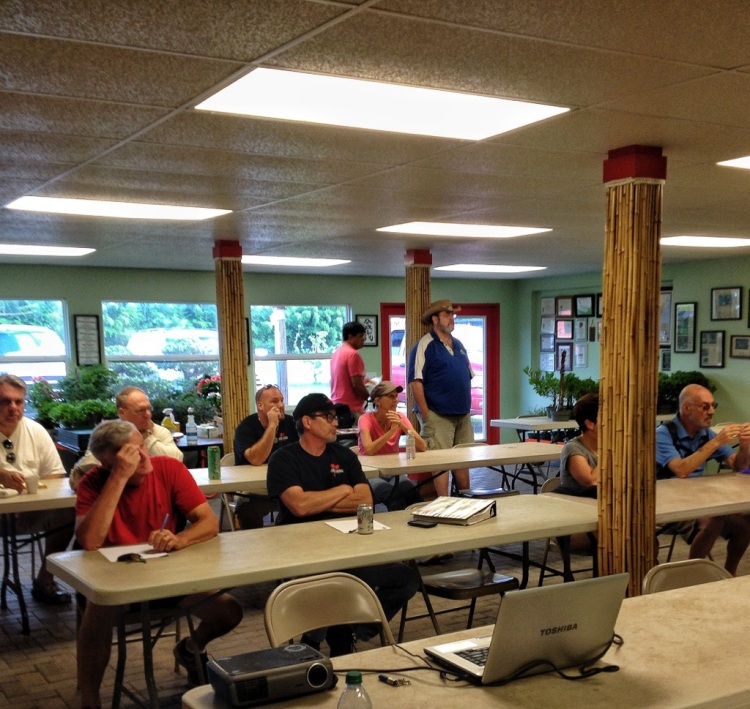 He’s the man in the blue and white shirt. He looks like he’s ready to take a nap.
It should be noted that Erik happened to be talking at that point.
Let’s talk about this bald cypress.
There were two others that were brought to the class that I didn’t feel were strong enough to carve on. One had been collected recently and it had the perfect trunk. I did not want to kill it.
The second one was a beast and, though well established, the direction I wanted to go with it was very extreme and I made a judgement call and decided that it should wait until January to carve on it.
Brad’s tree, though, was ready to carve. It was in a bonsai pot in bonsai soil, it had adequate growth this year and should have the energy to sustain through the winter and spring rebirth.
Unfortunately I didn’t get the beginning pics. It was cut down by about a foot and then after a quick reevaluation, another six inches.

The drawing above was kinda what the tree looked like before the first chop.
There’s some thickening (inverse,reverse or obverse taper) high up.
The pic below shows the two chops

I chose the second chop because of the two existent branches to use as the apex (one of them at least).
Now, one of the main reasons I chose to carve on the tree was the fact that it was already hollow. That pre-existent damage will make the carving less traumatic.
It was also full of water.
Imagine a chainsaw and a tree full of water. Uh huh. I got wet. 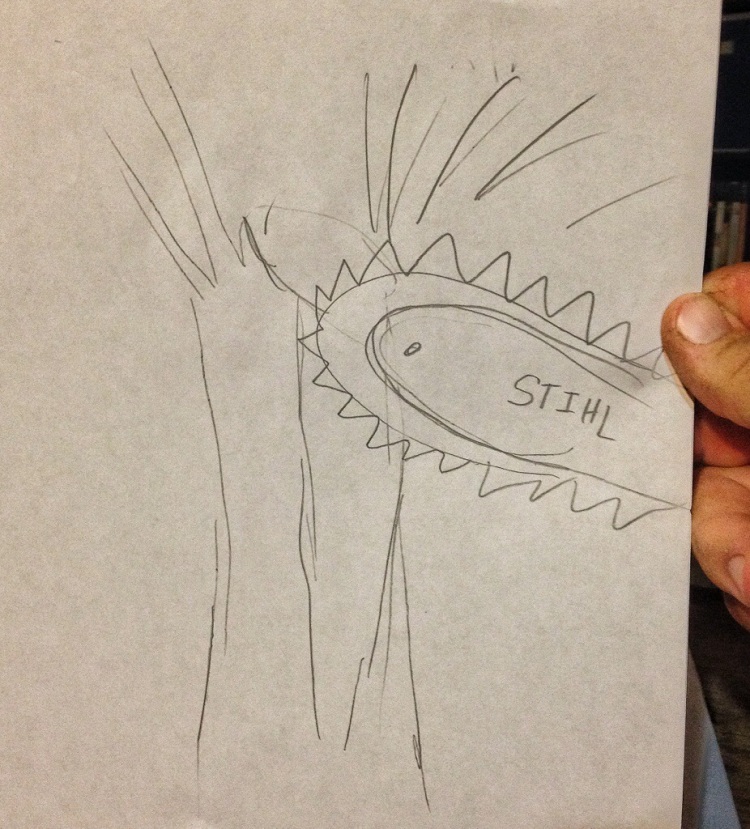 The main reasons I’m hollowing it is to create some taper and give it some back-story. Some kind of historical context. 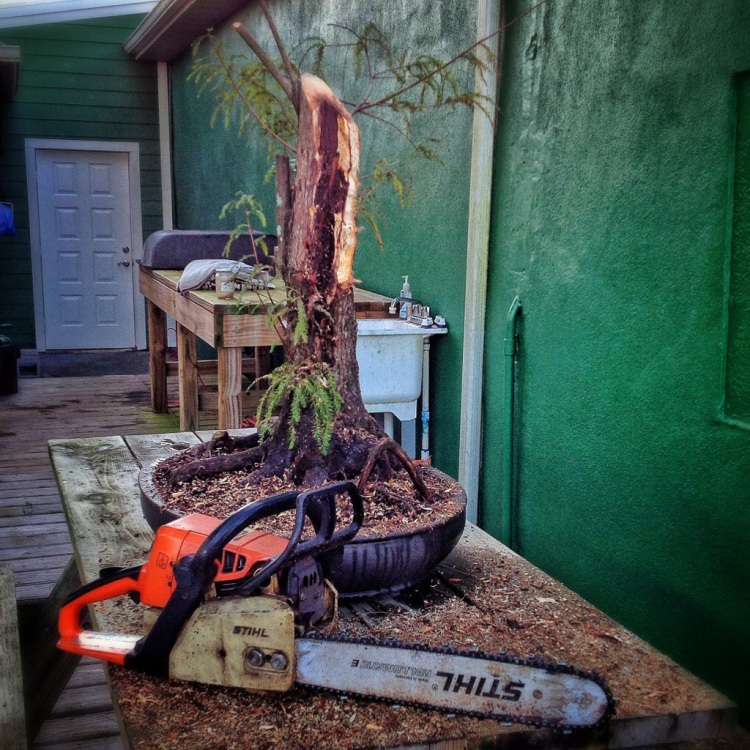 I must note that the chainsaw was borrowed; I would never put a bar on a chainsaw with the writing upside down.
Inconceivable.
Now, the use of a chainsaw is mainly just as a material removing tool.
And it’s cool.
And the chicks dig it.
Seriously though, my philosophy on carving tools is to start with the most powerful tool and work down to the least powerful.
I could certainly do this whole thing with a die grinder and a samurai bit.
But Doing so would decrease the life of said die grinder and dull the samurai bit.
And have you seen the cost of these tools?
So it’s the chainsaw-

And this is the result-

It’s kinda rough.
That’s the theme and the challenge when carving on a cypress.
Next tool is my angle grinder with the Lancelot chainsaw wheel. 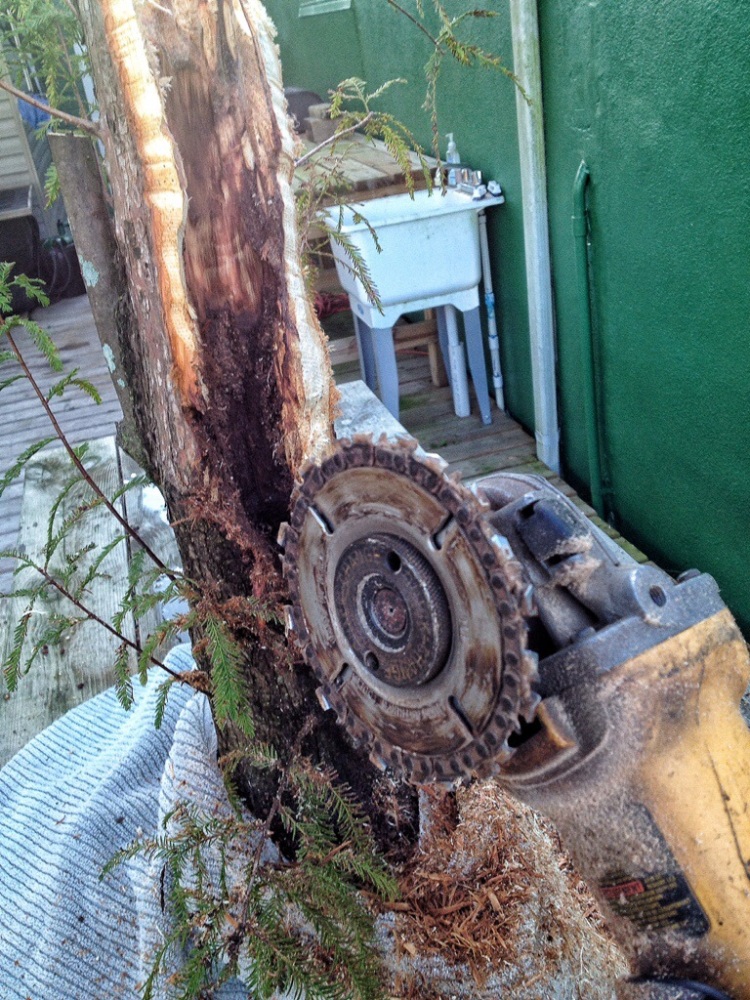 The difference between this tool and the chainsaw is one of bulk removal.
The chainsaw is more linear. You cut lines or blocks out of the material; and also deep trenches because of the long bar.
The angle grinder, using back and forth motions, removes material that can’t be cut out but must be carved out.
And it’s an ideal tool for this, the sawdust really flies.

Which brings us to the torch. 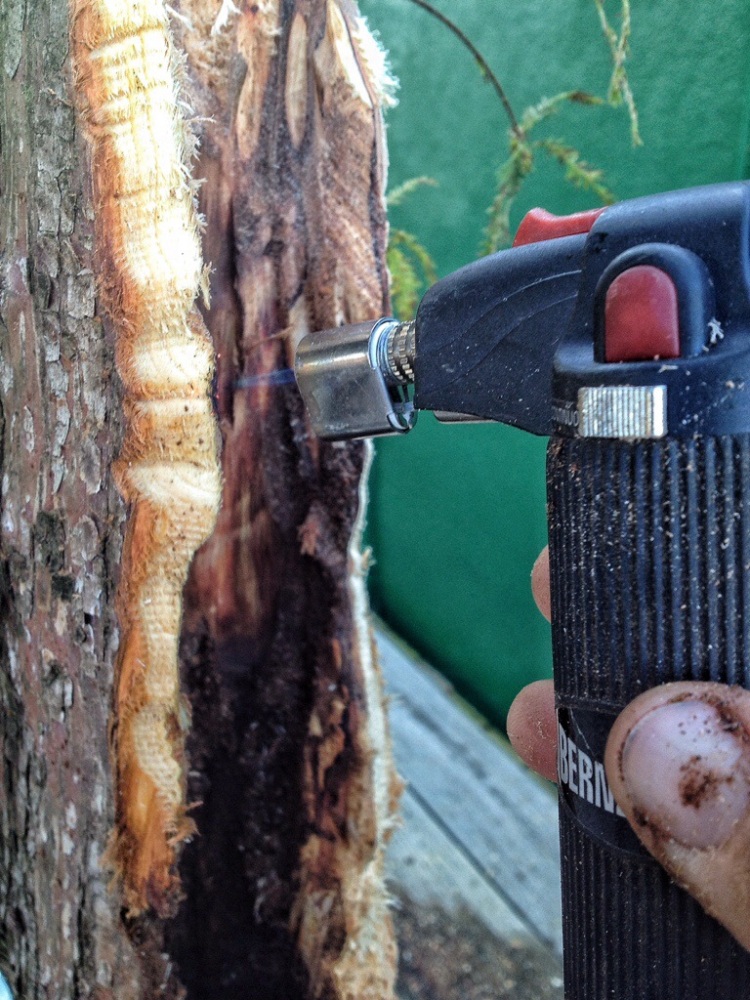 On a bald cypress with wet wood a torch is a necessity; the fibers are just about impossible to remove without burning them away. 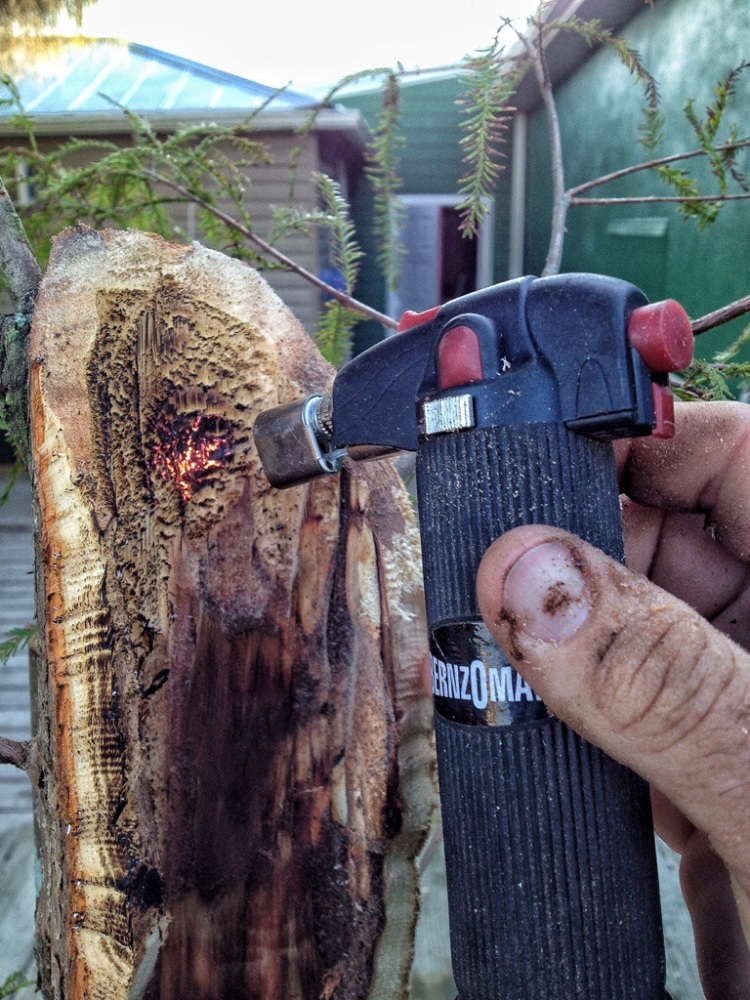 This won’t be the last time you see the torch.
Midway through the carving it’s still a bit rough.

Now it’s the die grinders turn with a rotosaw bit. 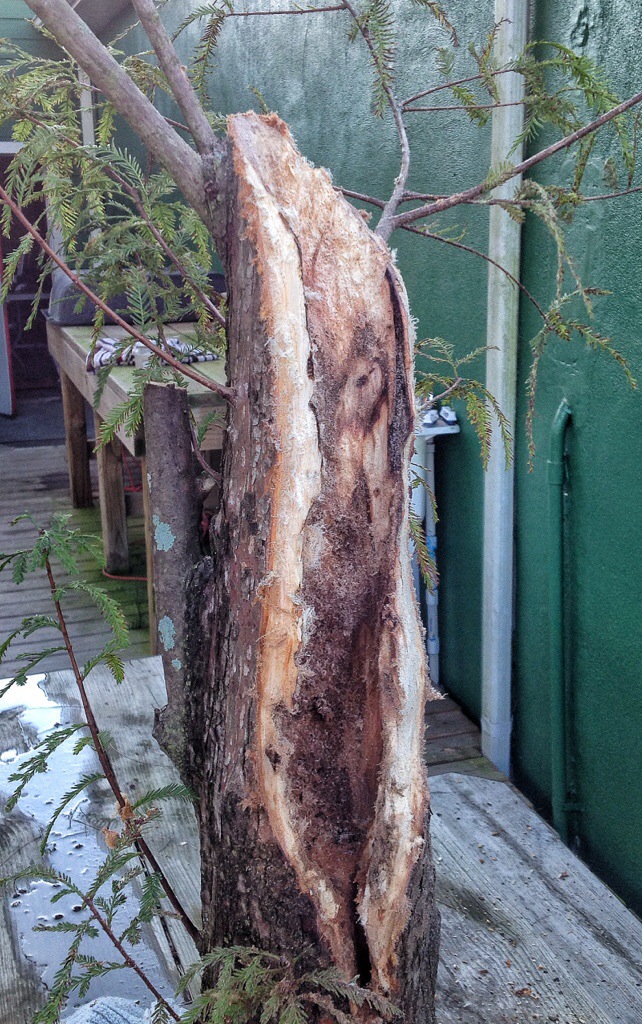 Now for the brush. 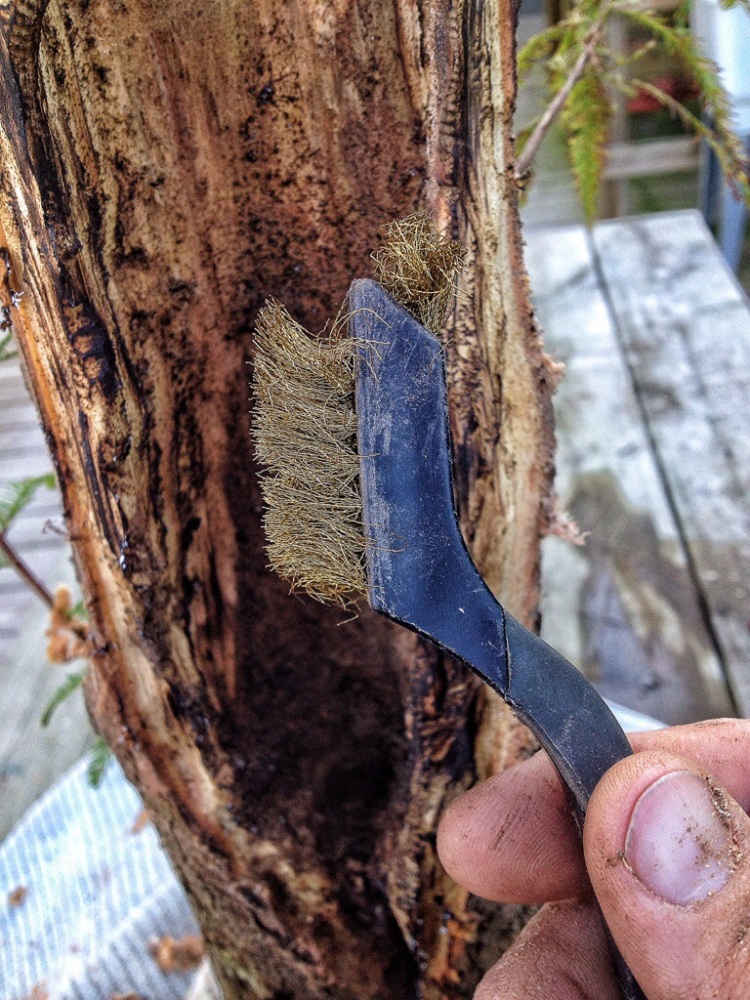 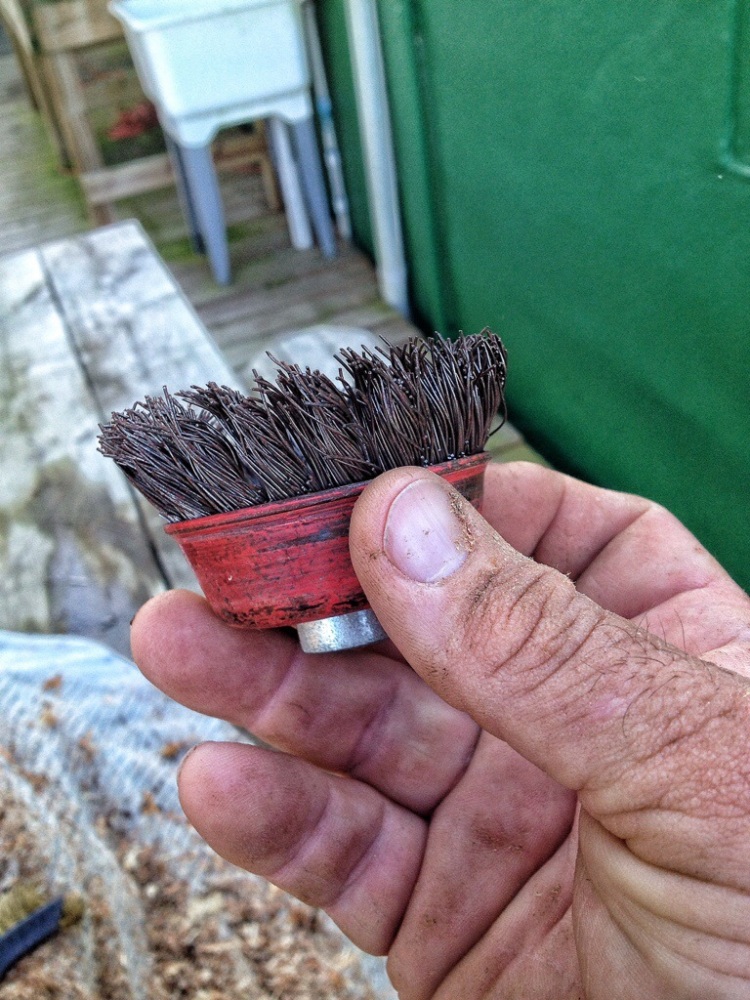 One reason I’m having so much trouble with this hollow I’m opening up was because it was full of water almost to the top of the tree.

And wet cypress wood is not easy to carve.
More brush and fire and brush etc… ad infinitum 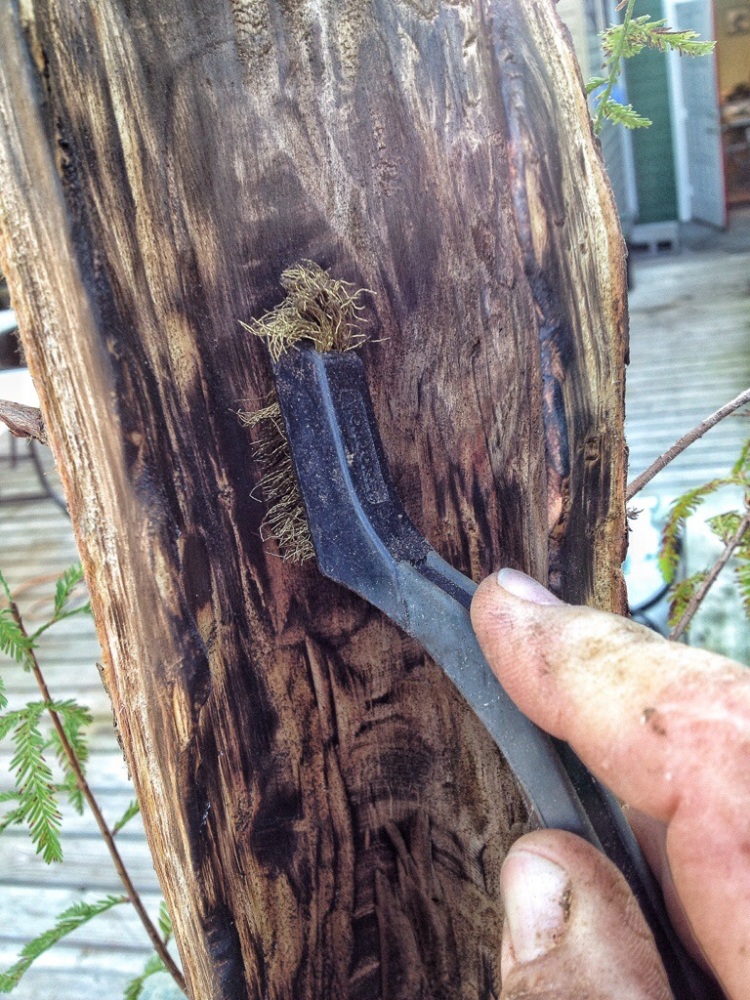 And it’s beginning to smooth out.

From here the next step is either lime sulphur or just plain old time and weather.
People ask about the burnt wood and if I’d keep it dark like that.
Maybe I would. It depends on the tree and if the design needs it.
This carving is too new for me and the branch placement isn’t done yet (which I’ll leave to Brad and Erik) for me to decide whether it needs some darkness.
I counsel patience my friends.
Look at this!
This little dude (looks like some kind of mantis) is inspecting my work.

How’d I do Mr. Bug?
The finished carving (remember, no styling yet)

Look at those wild roots!
This is going to be a cool tree in a few years (that’s all it’ll take too, bald cypress develop fast)
My vision for the tree in pencil and paper: 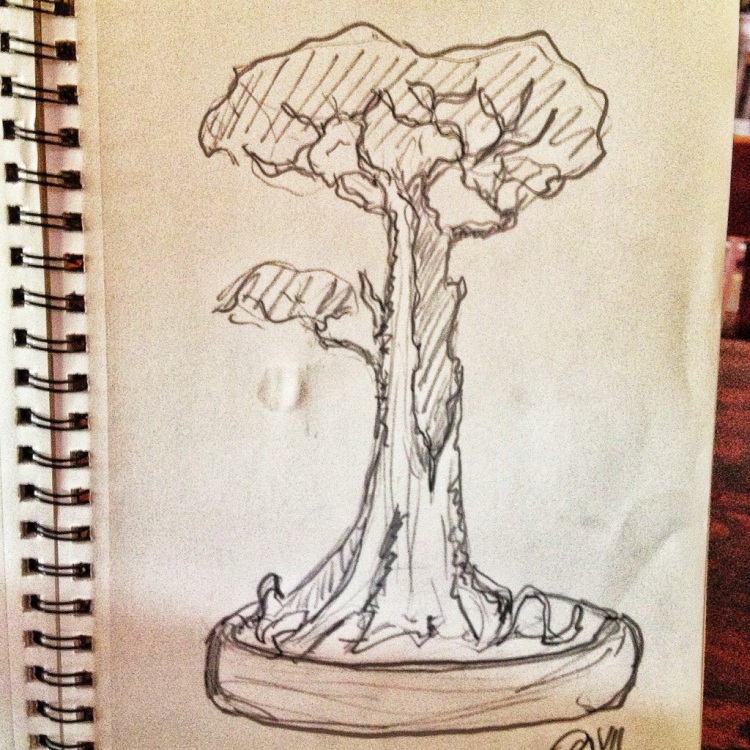 I see a classic, bald cypress flat-top style for it.
It fits.