After the Cincinnati workshop (see the last post) and lunch at the Hoffbräuhaus (beer), it was time to travel to Indianapolis and to my new friends house, Mark Fields.
And this is what I’m talking about, total bonsai, the first thing I see when I get there is a wiring job in progress on a pine. 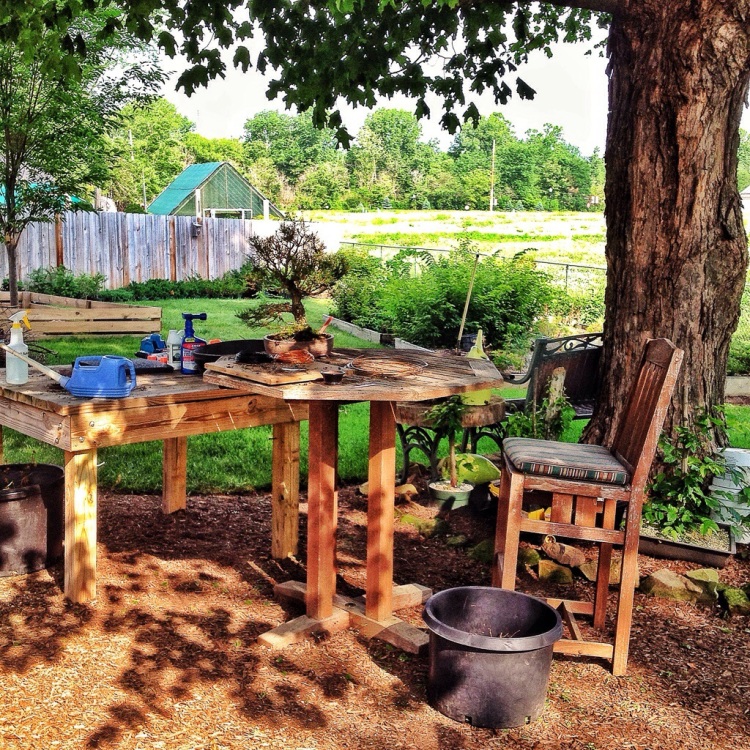 He had been teaching a class earlier in the day on wiring a secondary level on the branch pad. Something that is never seen in books.
I got a quick tour in the bright, Indiana summer sunlight.
This is a jade called crassula ovata “gollum”. 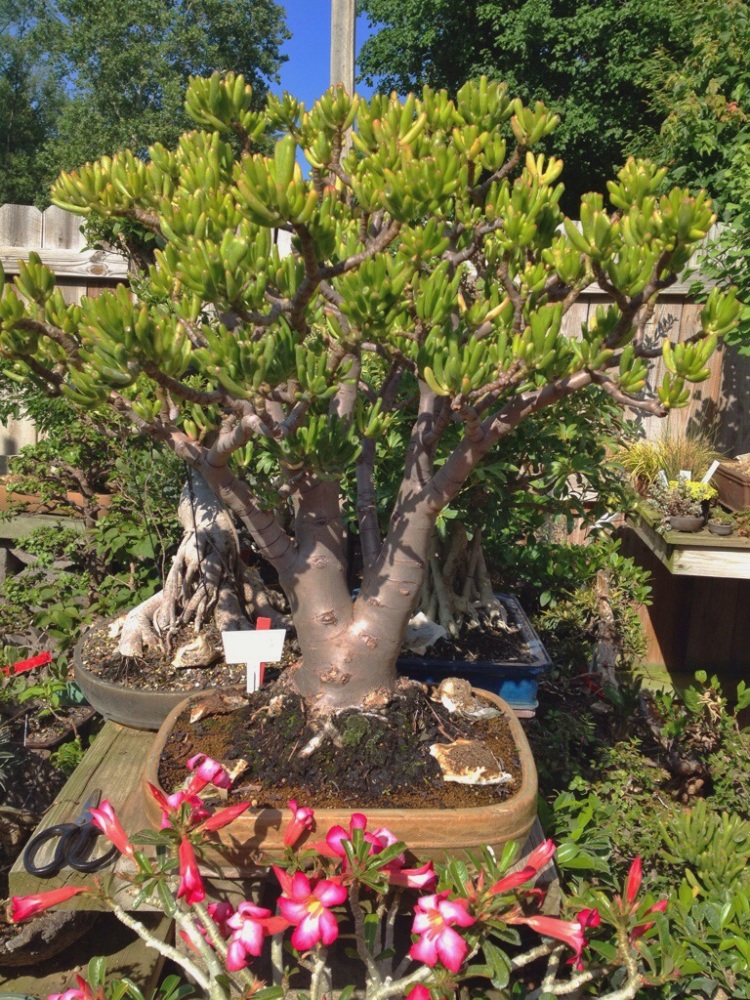 He grew this tree from a small cutting.
This next tree is a trident maple made up of about a hundred saplings that were attached to a cone structure and allowed to fuse together.

It’s pretty cool but also controversial. Is it a real bonsai?
I think so, because, if grafting is a valid bonsai technique (which it seems to be) then this is just an extreme form of grafting. 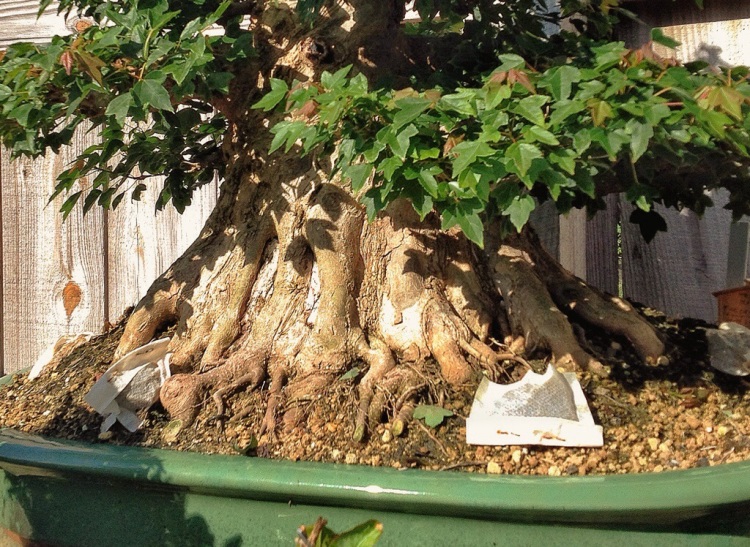 What do you think?
The next tree is a familiar face.
A Neea buxifolia forest. 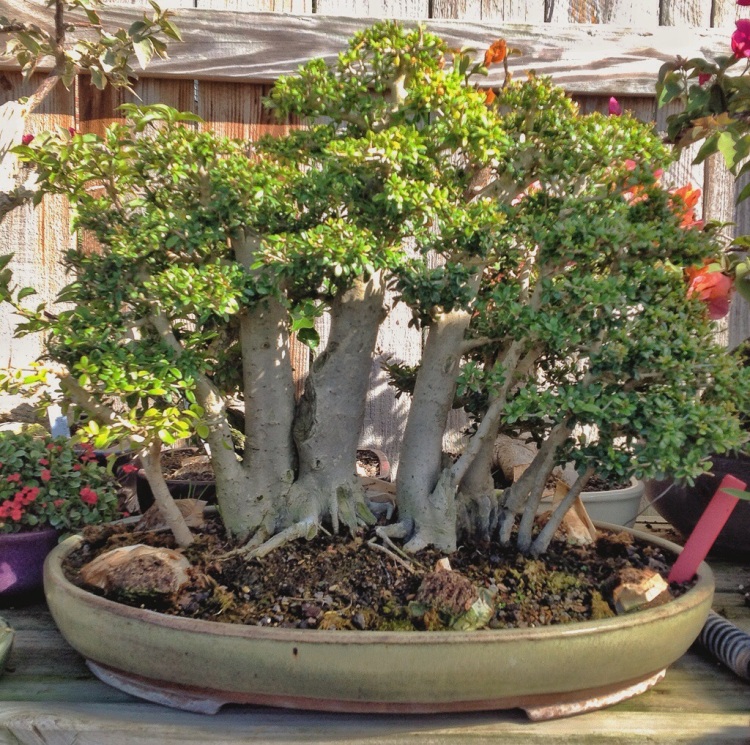 Which was a welcome sight, I’d like to introduce neea to a much wider audience and the fact that Mark can grow them and, indeed, make them thrive up in this frozen tundra is heartening.
Look at this little fella:

Mark had a lot of trees, many tropicals but also many conifers.

Look at the deadwood on this juniper.

And the grandeur this tree oozes. 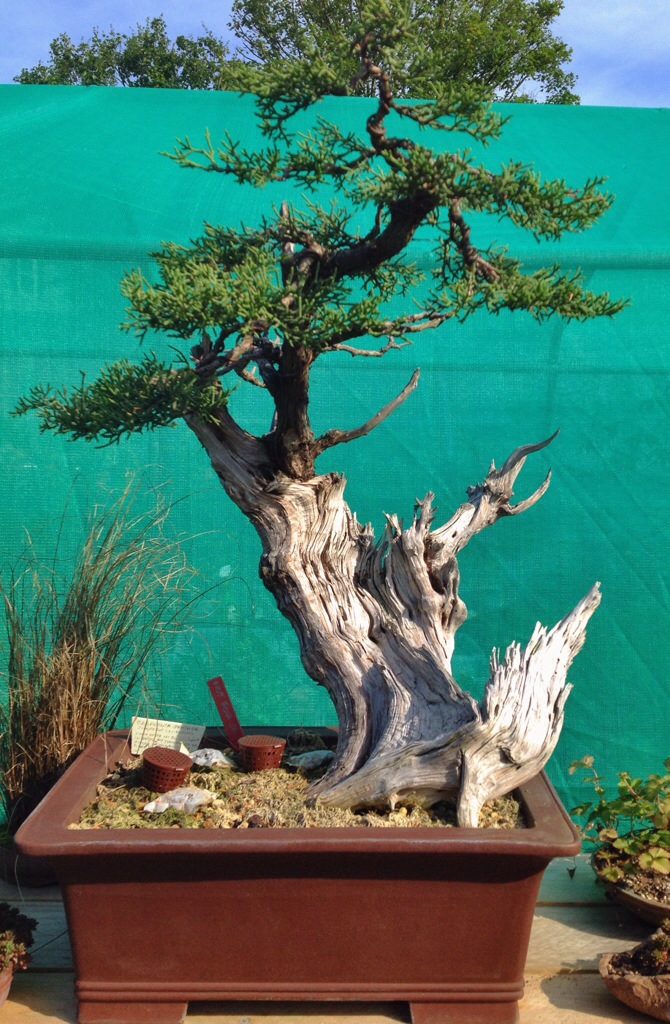 If, in fact, grandeur can ooze.
He also had many deciduous trees, hornbeam, elm, and many maples, like this Acer palmatum…. 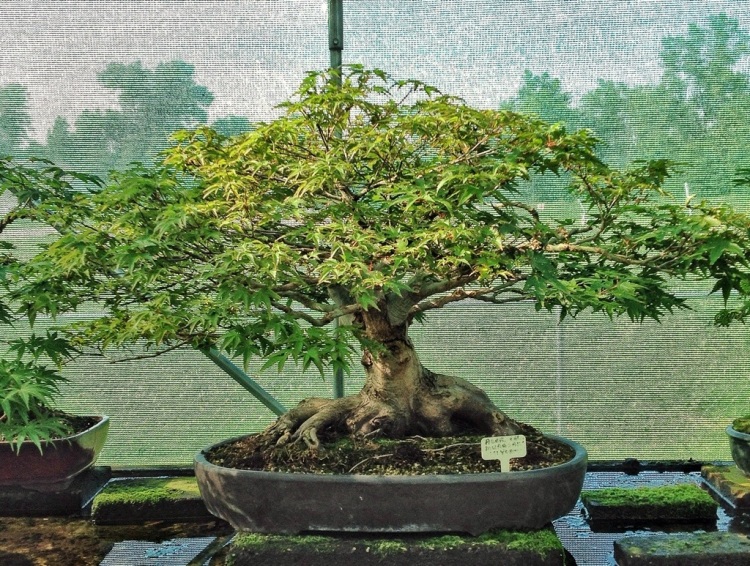 …which are usually grown taller. But I like the short, wide, almost tropical feel to this one.
But of all of these trees, this next one stood out.
A small leafed ficus burt davyii. 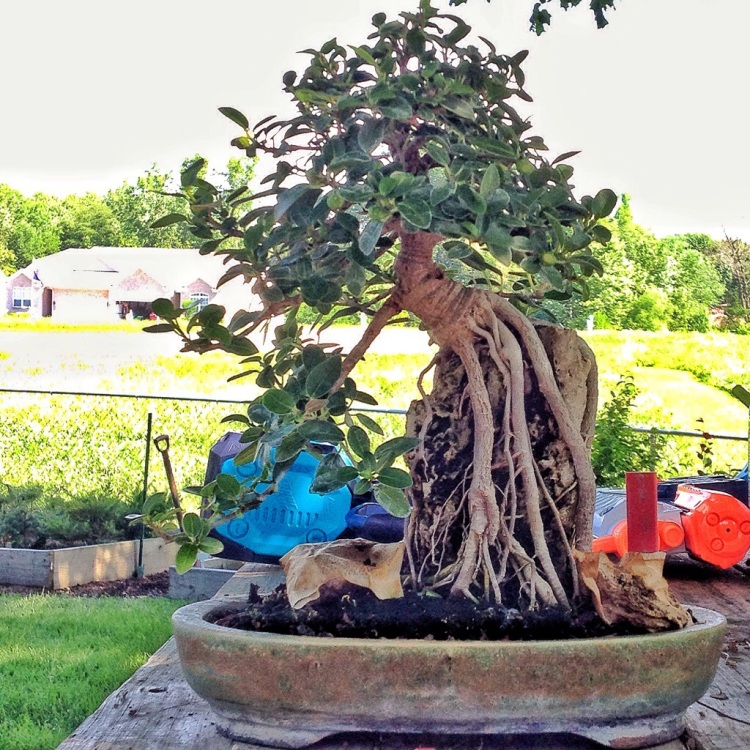 It was grown by Mark from a pencil-thick cutting into that magnificent root-over-rock specimen.
It is probably the best root-over-rock I’ve ever seen and, me being from Florida and all, the best burt davyii I’ve ever seen. And I’ve seen a lot.
I told him, sincerely, that if he put this tree into the upcoming National Exhibition put on by William Valavanis, it could possibly take the best tropical award.
He photoed it and emailed it to Bill and, within minutes, it was accepted into the show.
I hope it shows well.
After the whirlwind nursery tour I once again fell victim to the late northern sunset. It was almost 9:30 pm and the sun was still up and I’d had a long day.
It was time for a little blogging and then bed.
I had a very busy day the next day.
It was the workshop I’d been waiting for the whole trip.
The one with my favorite tree, the ilex vomitoria schillings dwarf.
Which is a weird thing that I didn’t get many pics.

The workshop took place in a Catholic high school in one of the science labs.
I only got one pic of a finished tree (and a grumpy looking man. He wasn’t grumpy, actually very happy, I think he was just giving me his passport photo face. )

I styled his tree into an upright, deciduous tree style (like the silver maples I’d been seeing all over).
In an earlier post I had mentioned that deciduous trees up here grew taller, by half, than they did in Florida and I wanted to make a tree that looked like the ones I’ve been marvelling over since I’d been here.
I promised I’d draw him a pic of the tree as I saw it. 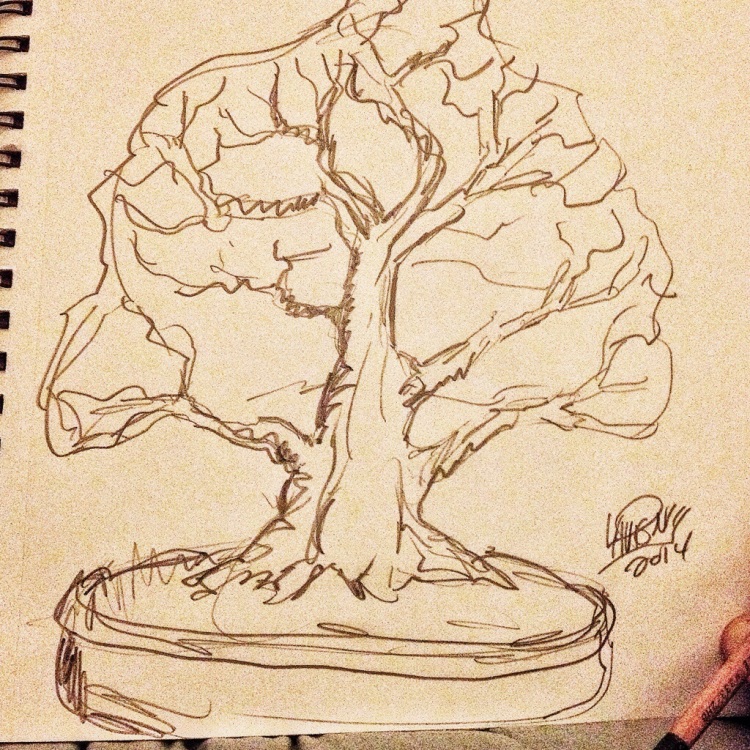 What a great bunch of people to work with in the Indianapolis club.
Thanks for inviting me.
By the end of the workshop it was time for dinner.
Everyone chose Hooters (I was indifferent. No, really, I promise) but, after an adventure looking for an open one, we were stuck with eating at Red Lobster.
Then it was back to Mark’s place for another night.

The next morning’s coffee was a surprise: it took me travelling all the way to Indiana to discover this awesome Puerto Rican coffee.

Which is ironic since I have so many Puerto Rican friends.
With many thanks to Mark’s family and a goodbye to his tortoise….

….I left this ilex in his care, I’d really like to see what he will do with it.

It is a personally collected tree that I brought along because I wanted to bring the best trees I had, but I had hoped no one would want it.
Mark wanted it.
It’s in good hands now, I know.
I can’t wait to see what he does with it.
On the road again.
This trip to Washington Indiana was full of big, empty fields with all the interesting stuff way in the distance. 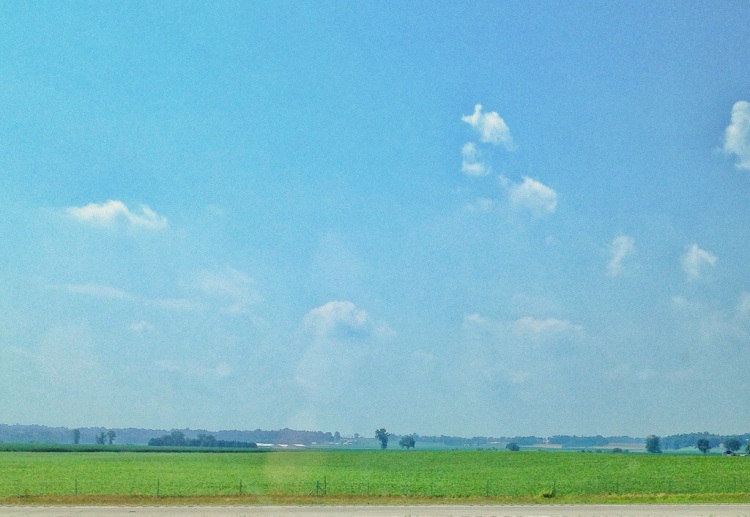 I was on my way to a private session with my friend CD, author of a bonsai blog as well (indianabonsai.com).
He had some junipers and some ficus he wanted help with.

It was on my way back to my accommodations for the night so I met up with him.
He had two junipers that looked surprisingly like a parsonii juniper. 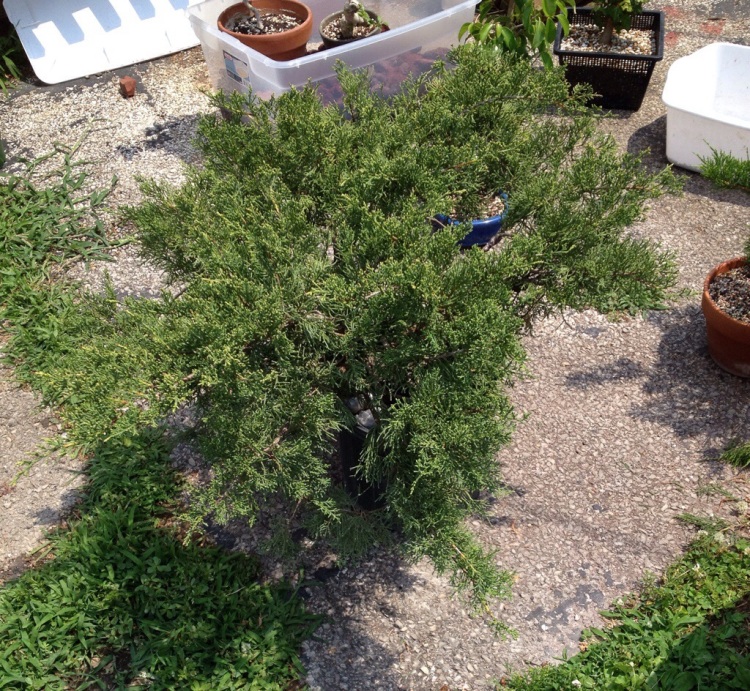 But had a different cultivar name.

The foliage was really similar though.

After examining the first tree I decided that we could do some initial styling but, horticulturally, it might not be a good idea to wire everything now.
If a juniper is in a growing state the bark and cambium layers become loose and wiring/bending excessively can compromise the health of the tree.
This “looseness” makes it easier to create Jin though. 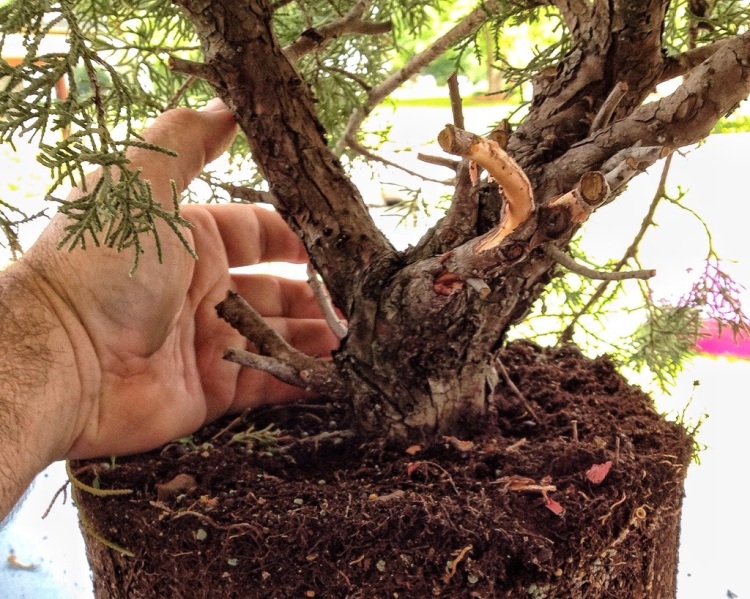 Some hand carving with my pliers. 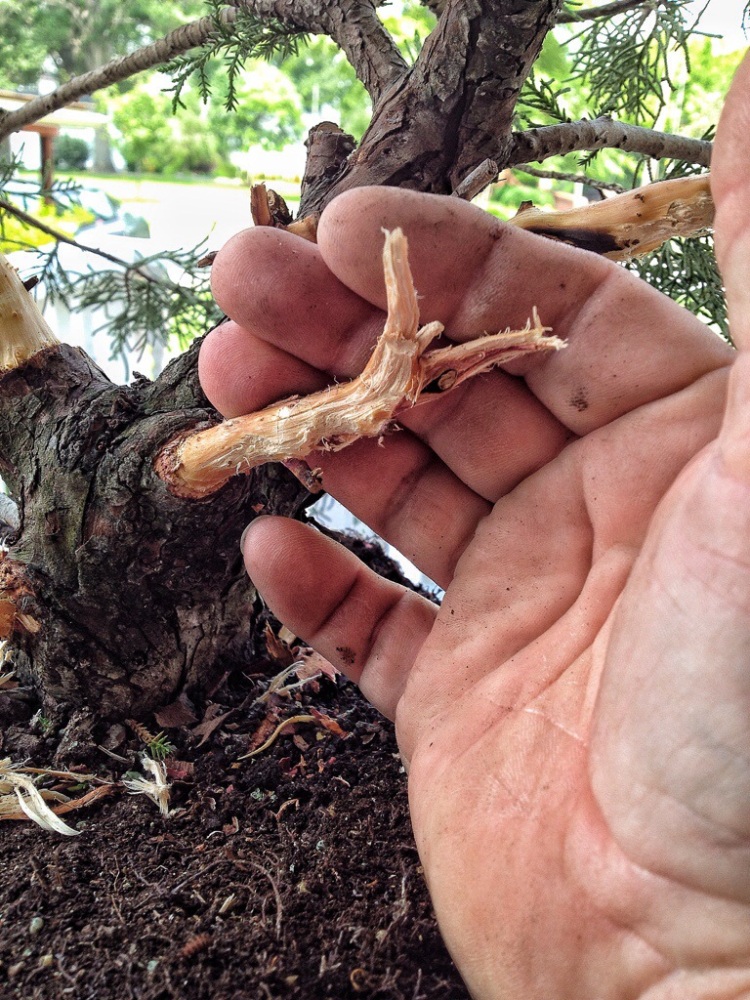 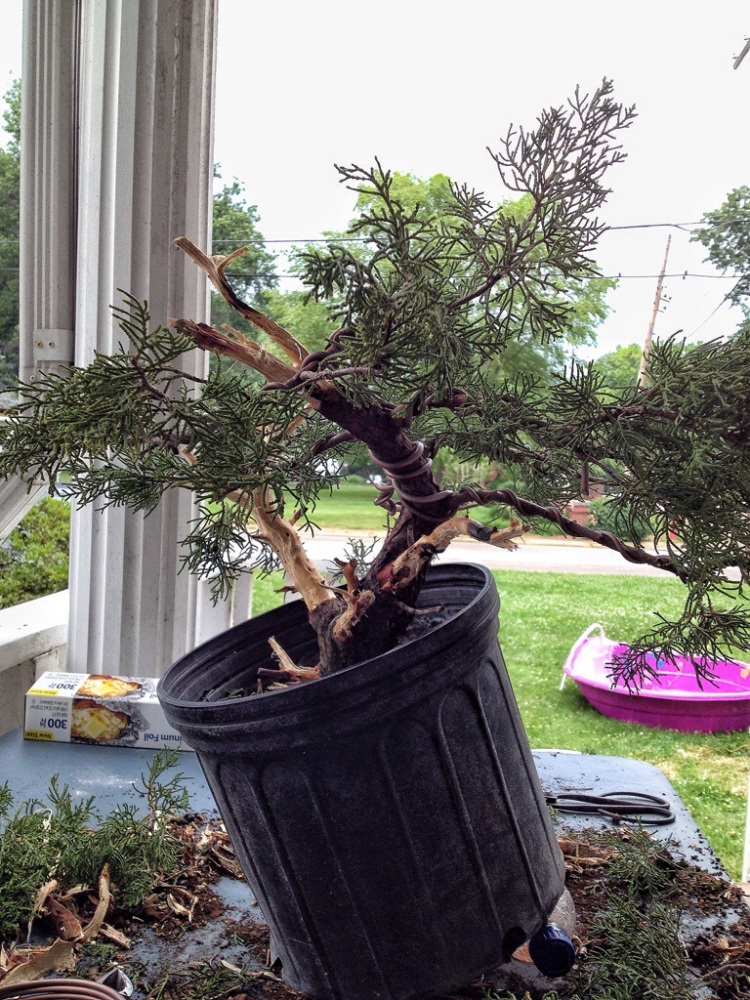 And that’s about as far as I want to go.
We worked on two junipers and the care they need now, after the abuse, is some shade and to provide some wind protection and using the technique of foliage watering, which a juniper responds well to, the absorption of water through the foliage (it needs regular watering too, but since we removed more than half the foliage and trees transpiration will be diminished by that, it won’t be “using” water quite as well and overwatering now might suffocate the roots).
CD had some ficus to work on as well and I immediately wanted to work on this one.

This was the original front but I liked this front better. 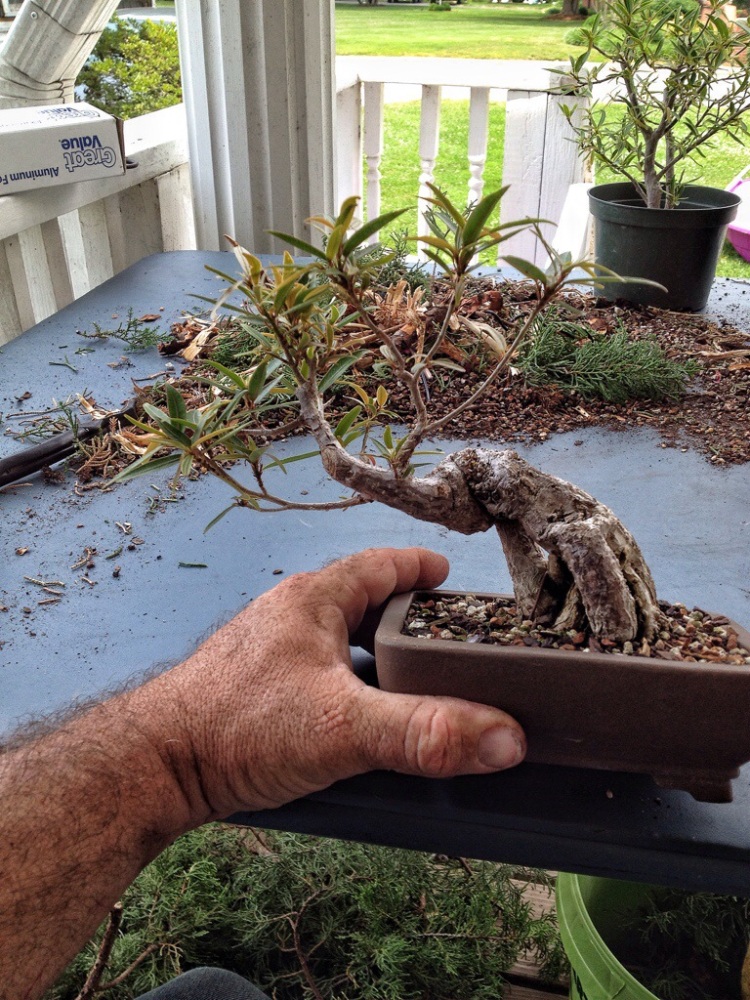 A little wire later and…

I’m not sure CD was convinced that my front was better.

As a side note, he’s a single man at the moment ladies. He’s the quiet, brooding artist type.
He has a beard too.
Anyway, he must have liked how the tree turned out at least a little because I helped him out with a few more trees.

At least, until the skies decided that it was time to go.

I had a four hour drive with many miles to travel before I could rest for the day.
And part of that journey was through a State Park called, improbably, Big Bone Lick State Park.
I just wasn’t sure what to expect.
Fortunately, I arrived back in Covington Kentucky without incident.

I’d managed to stay ahead of the tornadoes and dodged any bone licking that I might have been forced into, and finally I made it back to my home away from home. 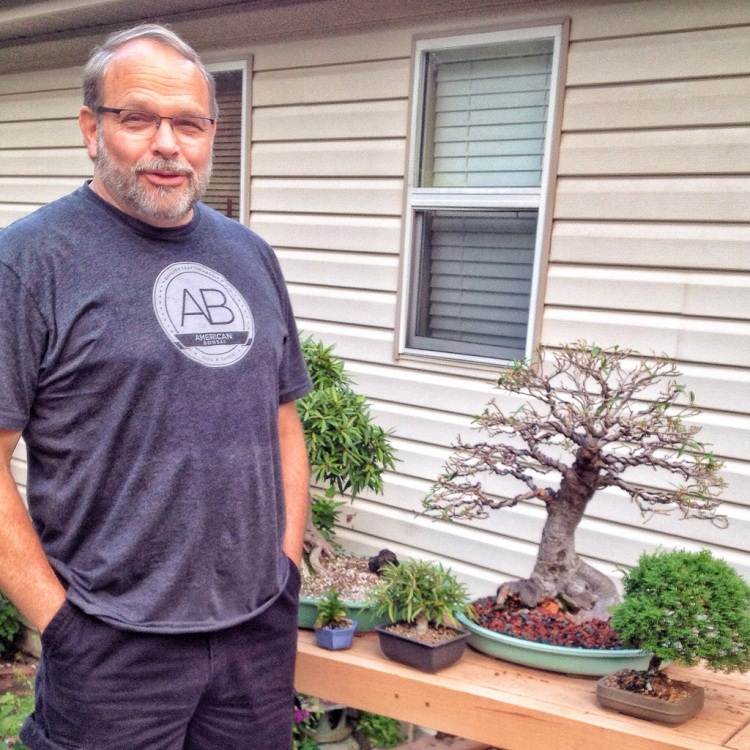 You remember Evan?
I took him out to a little fine dining for his hospitality. 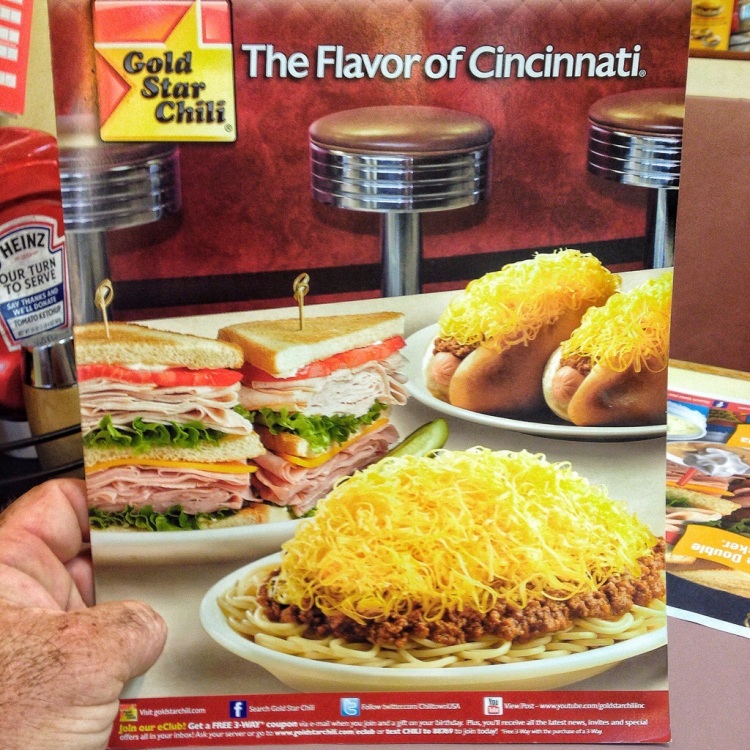 After dinner I treated myself to one more of the awesome, local microbrews. 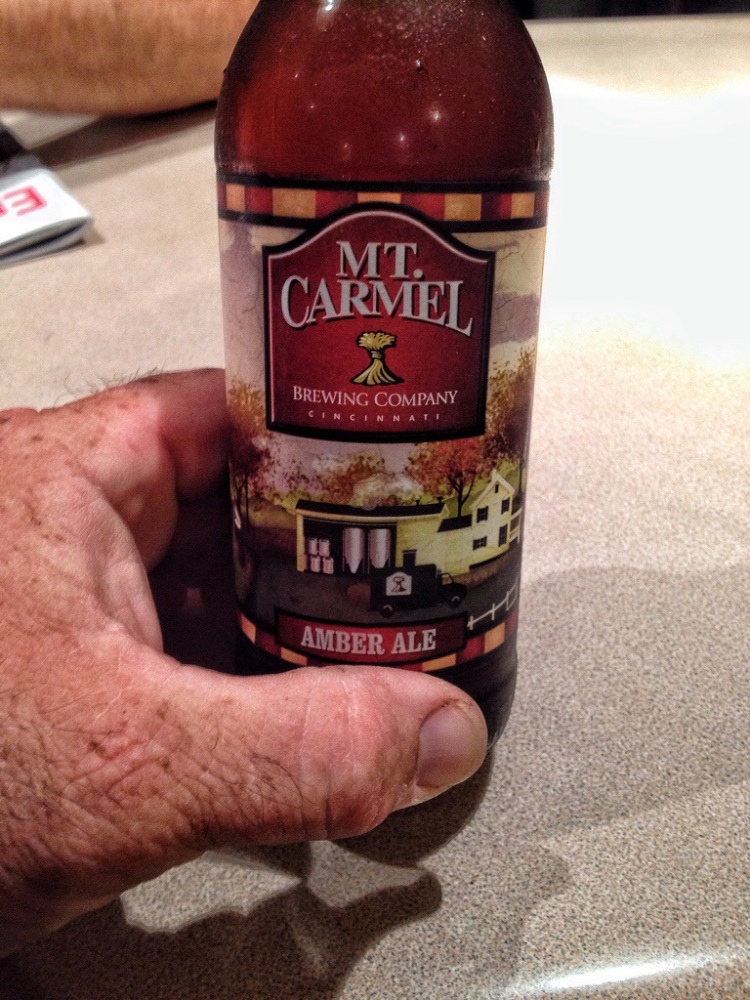 And then it was off to bed.
I had a thousand miles to travel on the morrow.
So far, on my most fantastic bonsai journey, I’ve travelled two thousand miles, met many new friends and worked on some of the most spectacular (and biggest) trees I’ve ever worked on.
Thanks to all the people who made this possible, put together all the workshops and volunteered their homes for me to crash in, to those who fed me and plied me with beer.
I thank you all and hopefully we will see each other again next year.
But now, my thoughts and trail turn towards home.
Just one thousand miles more and I’ll be able to rest my head on my own pillow, snuggle my beautiful wife and sleep, knowing that my family is under the same roof as I am.