I’m writing this post as a reference for the New Orleans club, and I’ll try to link all my neea buxifolia posts at appropriate (or just random) points throughout the body of the article.
The three trees I’m working on are, these two:

And this little guy.

I’ve updated this one earlier in the year.

But it’s story began here.
I’m not going to work on it today, even though it needs it. I’m using it as a visual aide in my upcoming demonstration for the Greater New Orleans Bonsai Society on October 17th.
I think the title of the talk will be “Neea buxifolia: You wanna hate ’em, but you gotta love ’em!”
Hate them?
Here’s an example: see this branch? 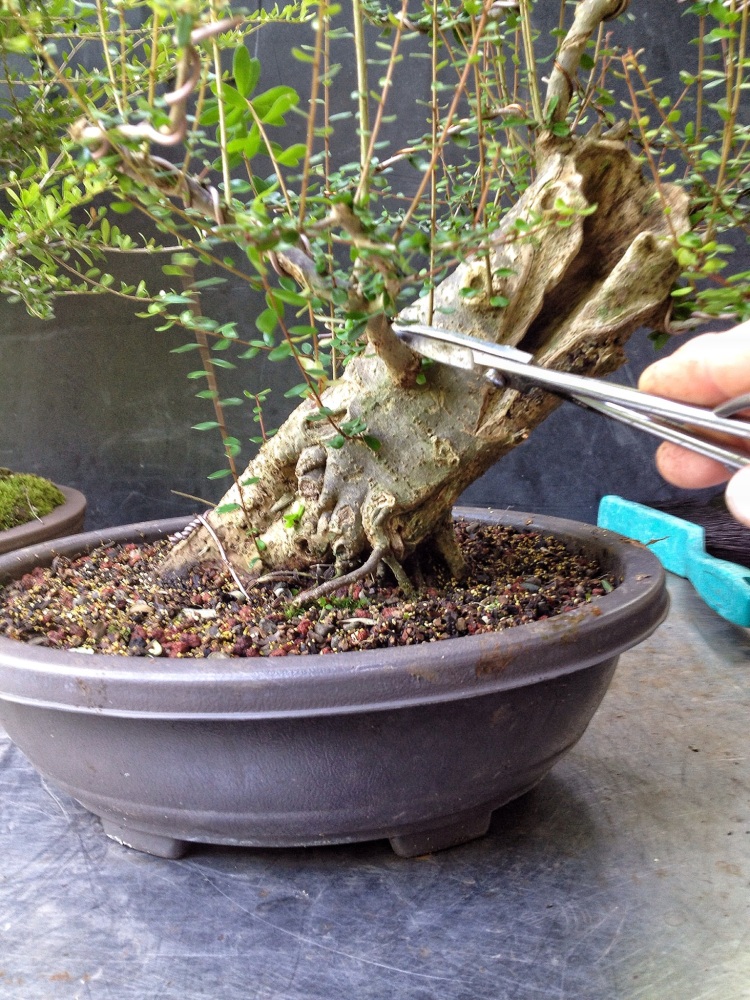 It was wired down for a good half a year.

And it popped right back up.
It’ll probably go, I have plenty of other branches to work with. That’s the love part. They like to grow.

The next tree you’ve seen, even if it doesn’t look familiar.

It has……grown.
It’s as tall as The Nook’s roof.

It was my Epcot tree for the 2014 Flower and Garden show.
You last saw it like this. 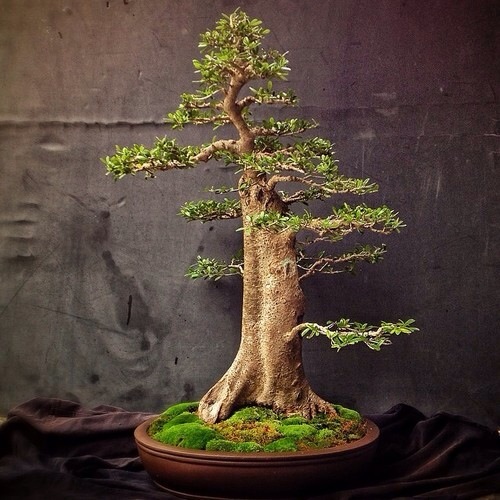 I let it grow this summer to recover after getting the top hacked back by an over-zealous Trim Team participant. 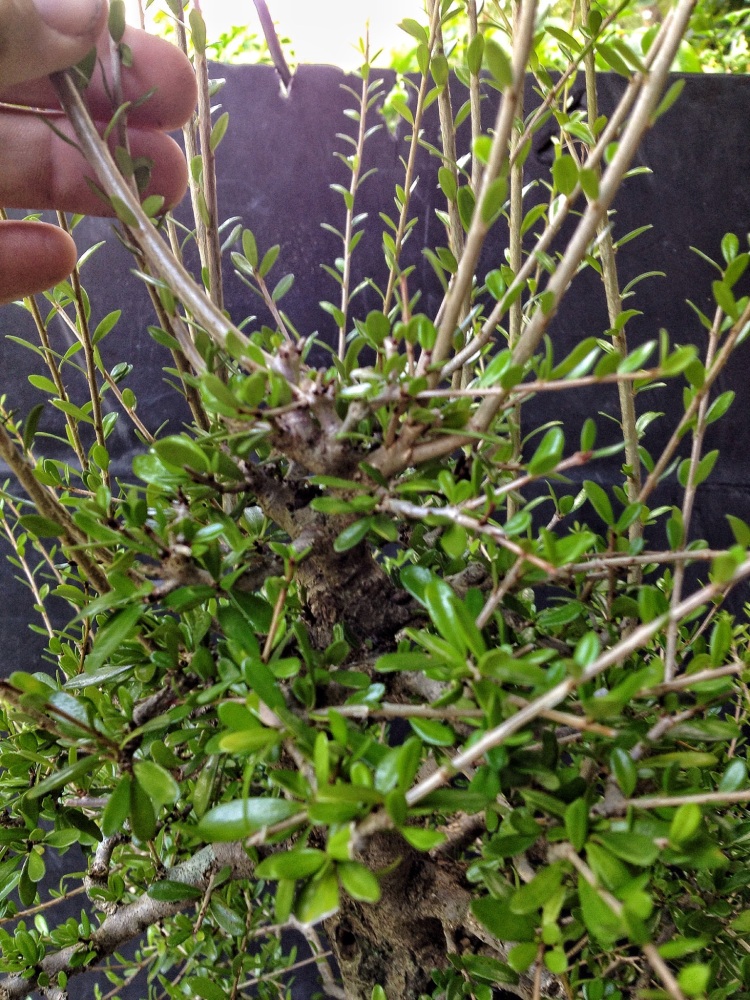 I think it’s filled back in.

Here’s a technique I shall call the “ponytail topiary trim”:
Grab the foliage as though your putting up some hair in a ponytail.
Scissors below your hand. 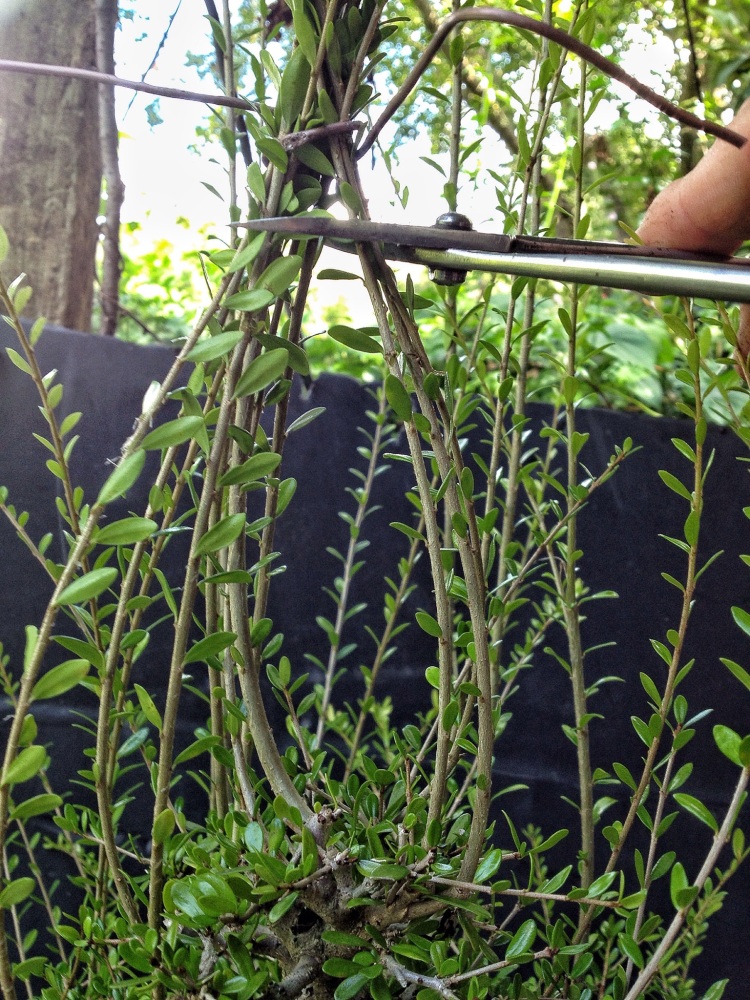 The remaining foliage will fall in a perfectly trimmed dome shape.
Unfortunately, with a neea, this technique doesn’t work because the strongest shoots….

….tend to come from the worst places.

Which adds to my argument that the tree responds to dappled shade better than full sun for back budding purposes.
Trimming these trees are therefore a meticulous process.

Here, I would normally rub out the crotches of the excess growth. 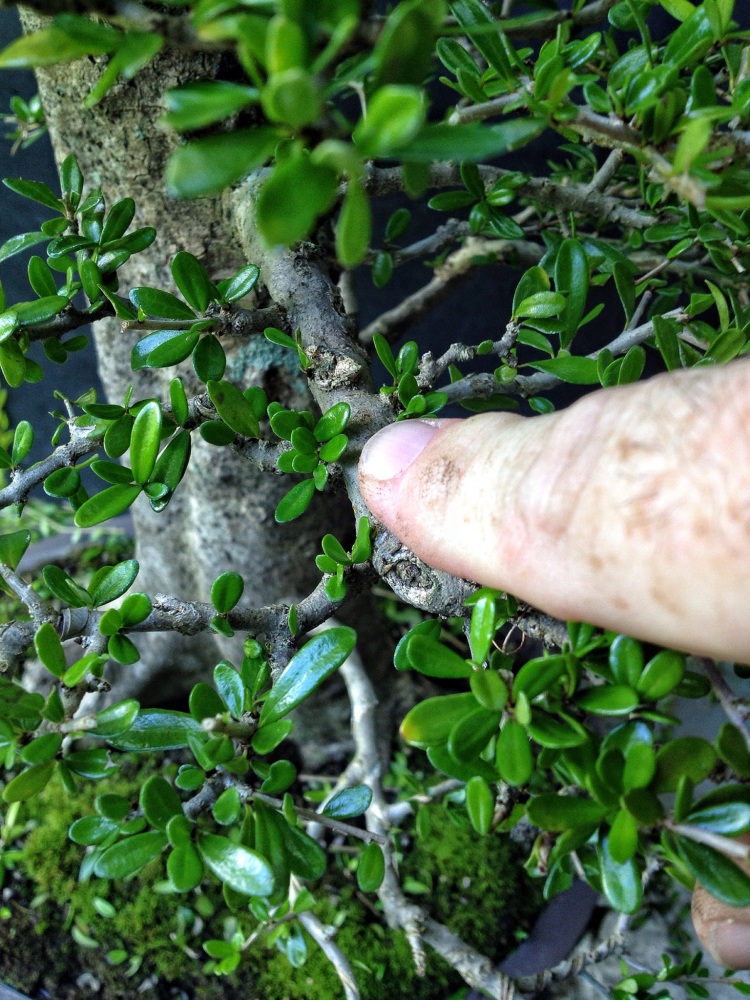 But not tonight dear, I have a headache.
Let’s talk moss.

There’s a love/hate relationship there.
On the one hand, it’s awfully purty.
On the other, you don’t want to mess it up with fertilizer on top of it.
I need to remove it to fertilize since it hasn’t been done since March.
I knew I’d find a use for this tool! 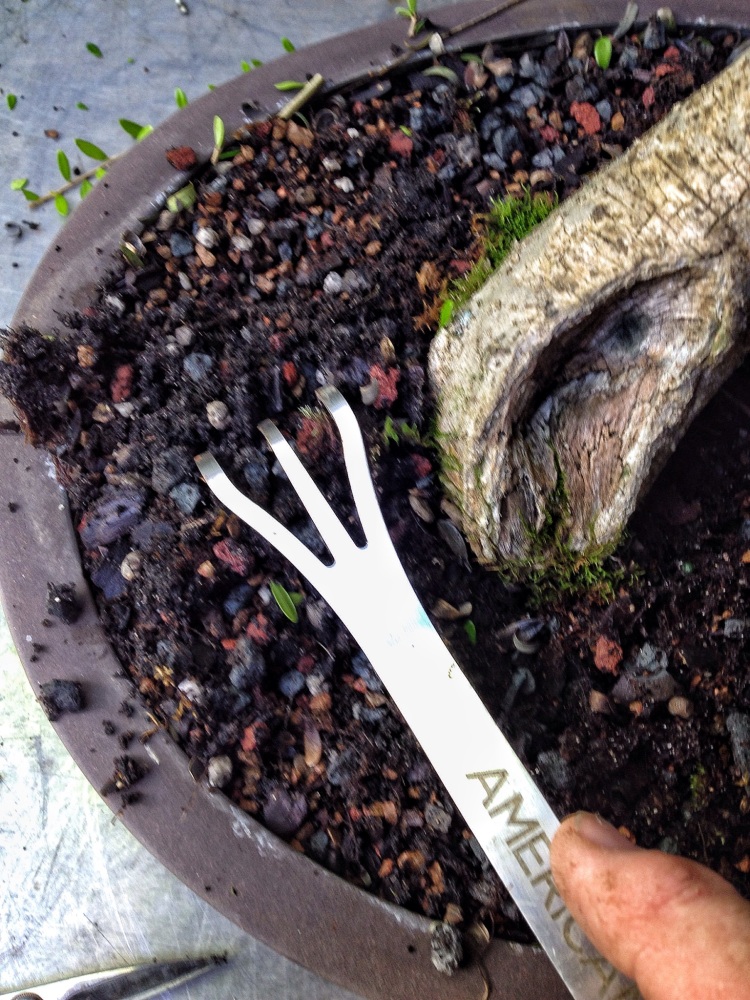 Psssssst! Don’t tell anyone but I’ve only used it as a backscratcher up until now, which works brilliantly by the way. The spatula end works well as a shoehorn too.
One of the benefits of moss is that it allows the tree to utilize the whole soil volume….

….by preventing the very top layer from drying out. But you get all kinds of fine dirt (that stuff on which moss grows best) on that same top layer.
The backscratcher is ideal in removing the top layer of soil so you can put fresh soil back on.
First some fertilizer.

And some aeration by poking holes into the soil.

What to do with the moss?
Should I put some back on?

I think so.
Normally, it’s recommended to start at the lip and work inward.

I prefer to start at the trunk and go outward.
Wait, maybe the official way is inward out?
Whatever the official way is, I do it the other way, because I’m a rebel and an iconoclast and I like to be contrary, so there!
Anyway, there’s only enough good moss to cover half of the soil surface. What to do!?
If your taking a picture, only cover the front. 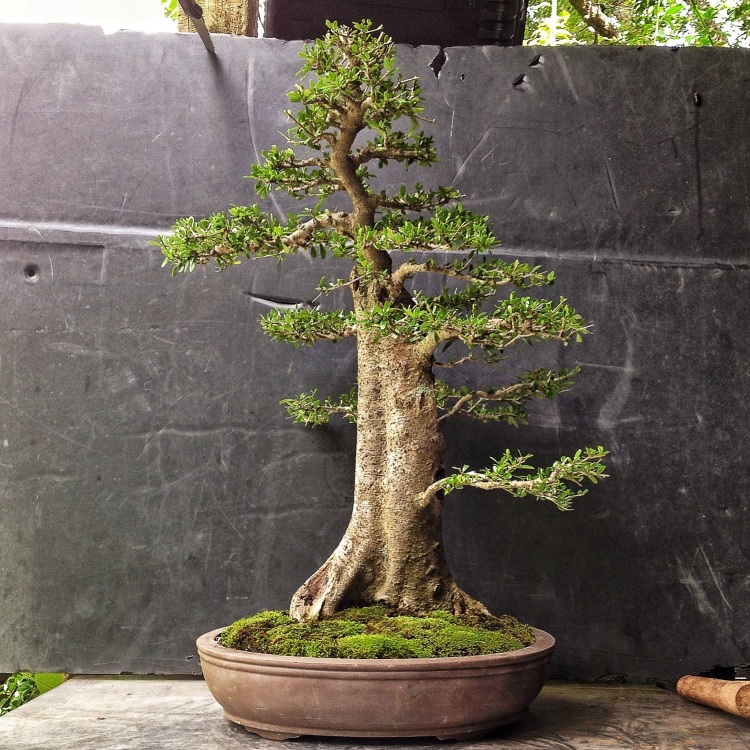 If it’s going back on the bench, do this.

Being closer to the trunk will keep the moss alive and hopefully it will spread.

I guess it doesn’t look too bad in a photo like that.
The last tree is one of my favorites. 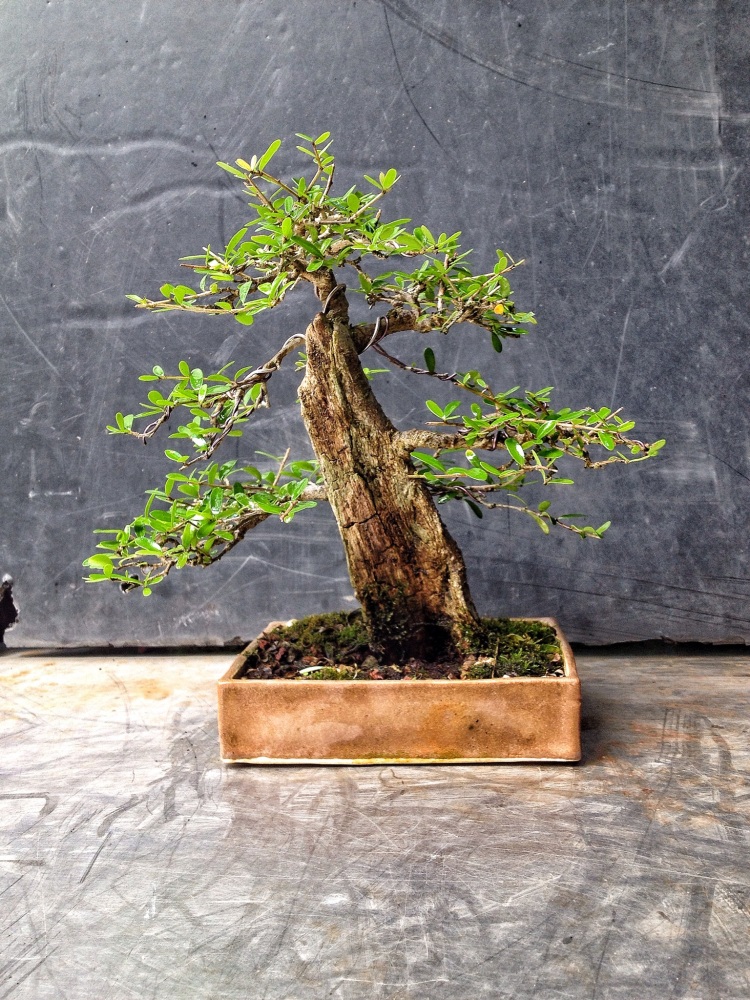 It desperately needs a repot. 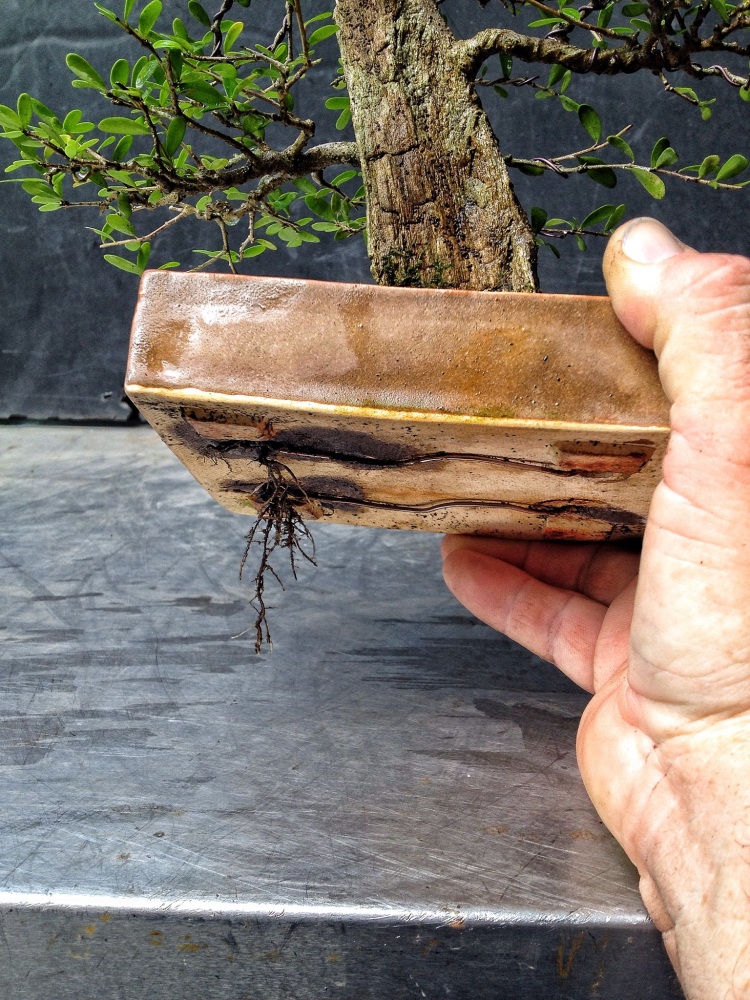 Speaking of which, isn’t that a neat pot? 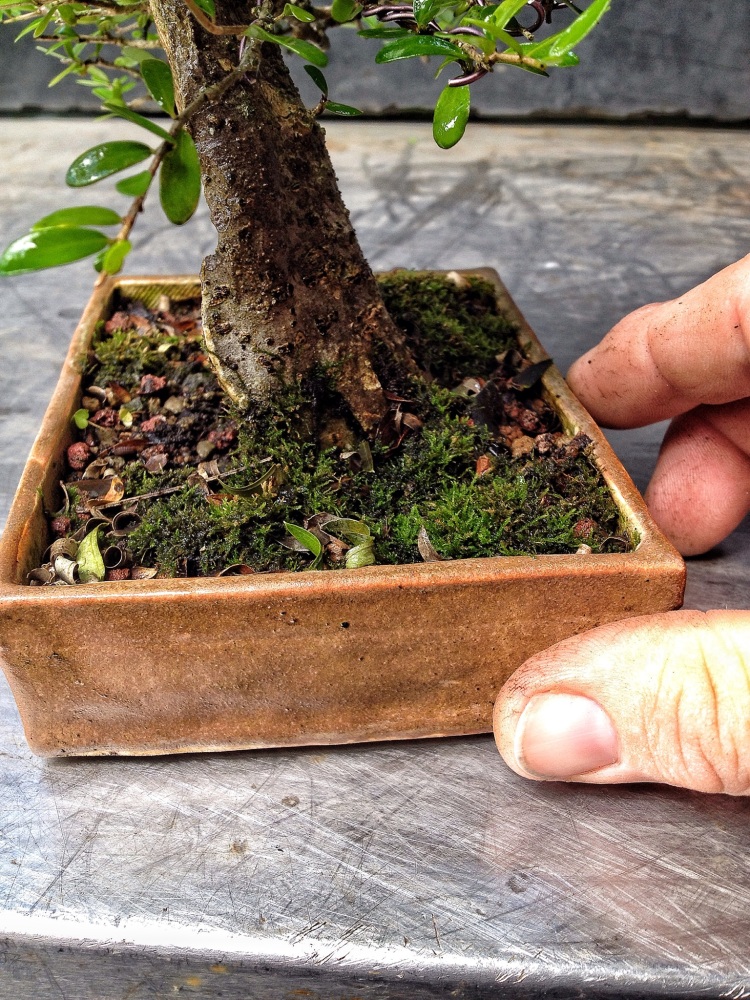 I’m not sure who made it but, if it’s you, please stand up!

Here’s a post about this little tree.
It’s also one of the favorites in the social media universe.
Definitely in need of repotting.

I usually do this in June or July, I’m a little late I guess. I’ve been traveling a lot of late (coming to a city near you!) so I have an excuse.
I usually clean the dead wood at this time as it’s less stress on the roots. I can hold the trunk and scrub. 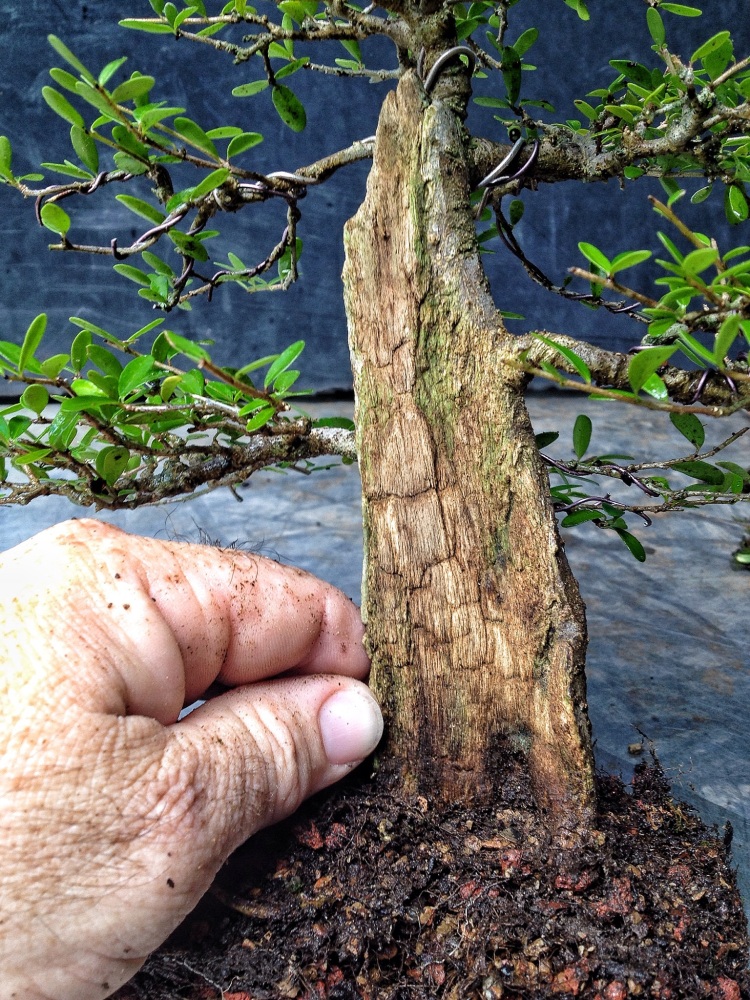 People who should know better keep telling me that the trunk will rot out and deadwood features just don’t last on a neea. I don’t listen anymore, or even argue. This wood hasn’t changed much at all in the ten years I’ve had it.

A trim and some root raking.

And new soil, fertilizer and the old moss back on top.

I didn’t put all the neea links (like this one) because you need to work at least a little, but I put the pertinent ones with most of the pruning, carving and growing tips I know. Happy browsing, New Orleans, I’ll see you in about a week and a half, God help us all….