This write up wasn’t going to happen, but then I posted (on my various social media platforms) this pic: 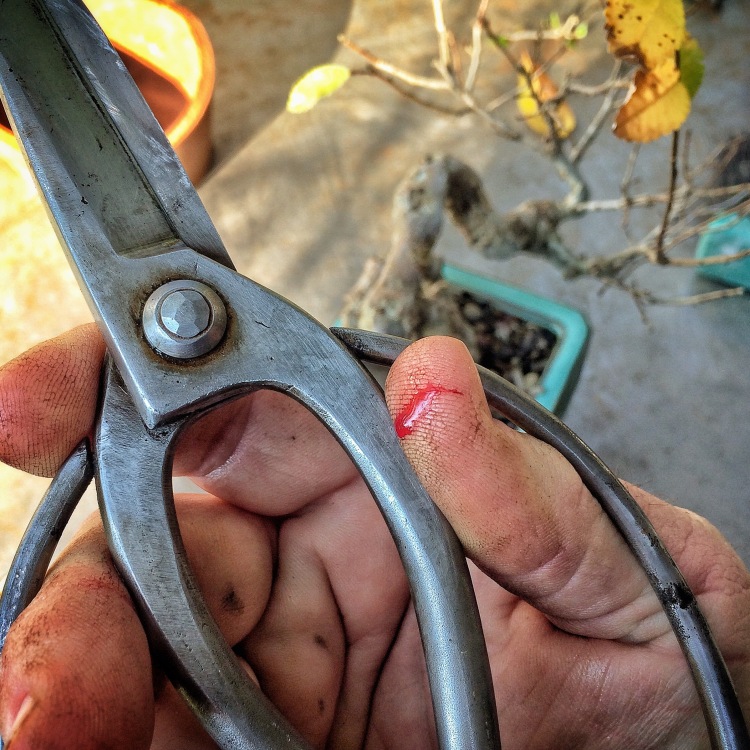 Now, you’d think that people (and you Kaya) would focus on the bloody thumb, but no, NOOOO, they wanted to see the blurry tree in the background. Damn bonsai obsessed people.
Well, guys and gals, here it is: 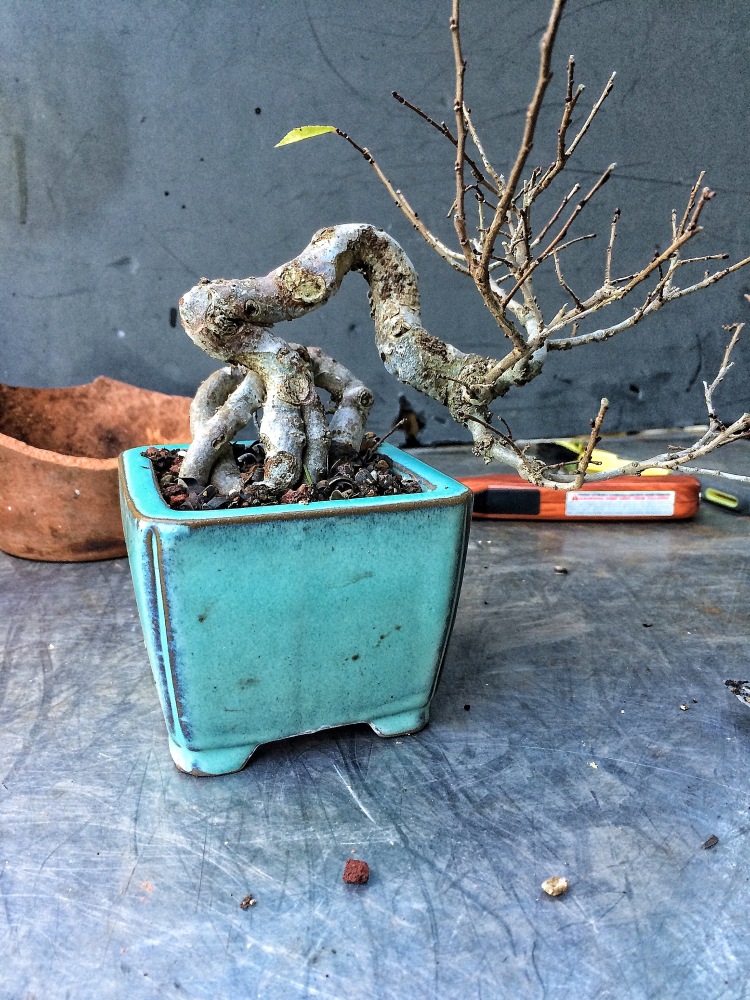 It is an American elm (ulmus americana). I’m not sure if it’s what they call the Florida elm (which would just add “floridana” to the end of its binomial nomenclature, turning it into a, um..trinomial name, I guess) because the main distinction is…..there isn’t one.
It’s the same tree but, considering that there is a sizable population in Florida that hasn’t been affected by Dutch elm disease, it’s more and more called the Florida elm. Maybe the beetle that transmits the disease doesn’t like the smell of margaritas and key lime pie.
Anywho, it’s on the bench to be repotted and trimmed/wired.
It’s a tit-bit-nipply this morning, which calls for a fire to warm my bones, I think. 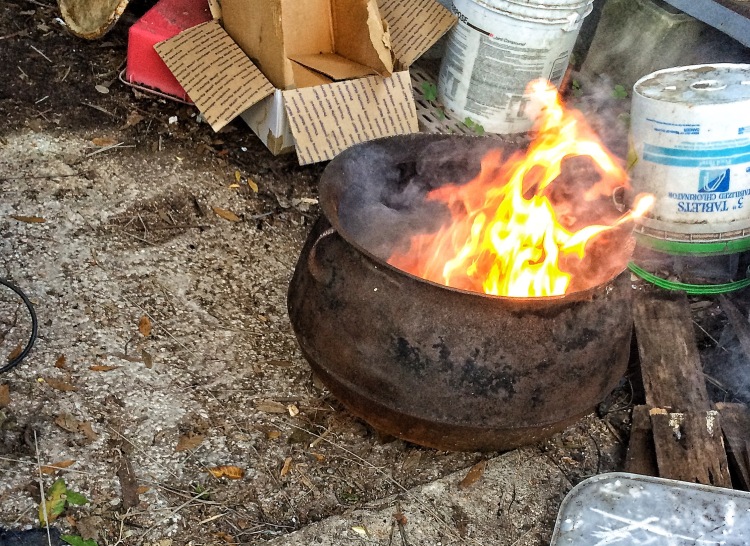 I’ll tell you what, this is such an educational blog, I learned a lesson this morning already. I shall now share my newfound knowledge with the world:
Acetone fumes are a little more rapidly explosive than gasoline when used as an accelerant in the process of lighting a fire. 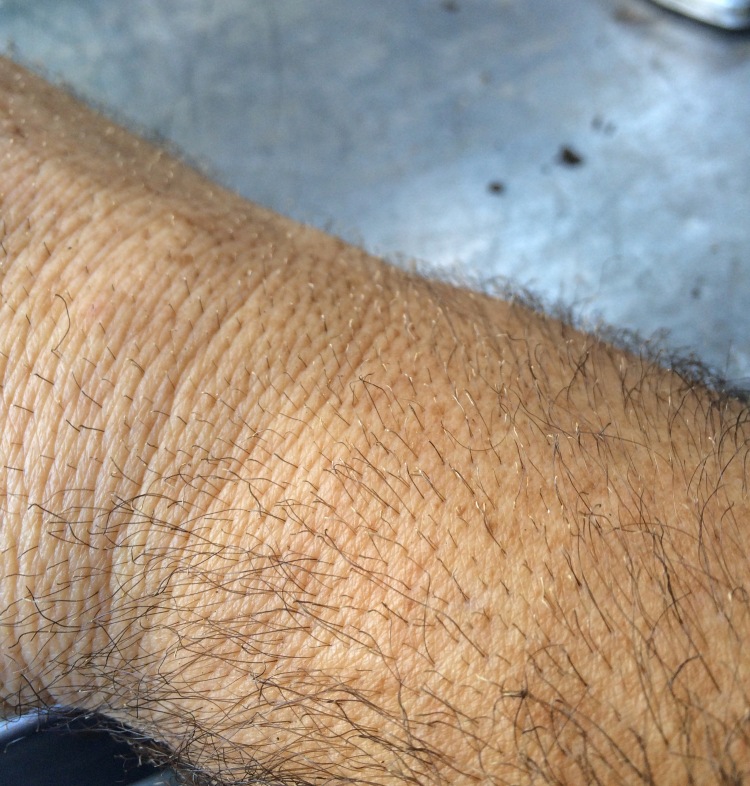 There’s a word that describes the sound. It is “WHOOOSH!!!”
The hair was getting too long on my arm anyway, my wife was threatening to braid it…..wait, I was just informed, by the over-the-shoulder reader (or, as she prefers to be called, the wife) that my arm hair was fine, it’s in…other places , where the hair is too long.
There will be no fire there, I guarantee.
This is the current front. 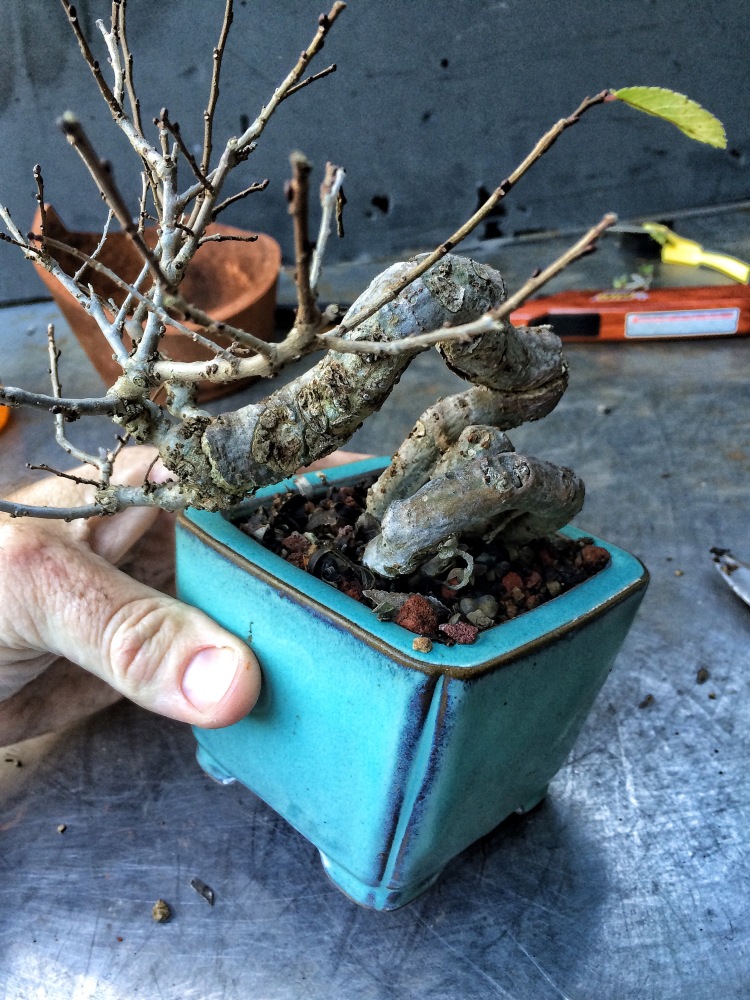 This is a root cutting, which means that, at one point, this belonged to a larger tree but was cut off to fit that larger tree into a smaller bonsai pot. Elm’s roots will regrow from the chopped off point. I do have several posts on the subject if you’re really interested.
The problem with root cuttings is their will to grow. From the cut end you’ll get way too many new branches (which is measured as “at least three but as many as 27”. If you have more than 27 then it’s called “super duper way too many”.)
I made the decision to allow three branches to grow from the end and I’m getting what “they” are now calling (in a snooty continental accent) “inverse taper”. 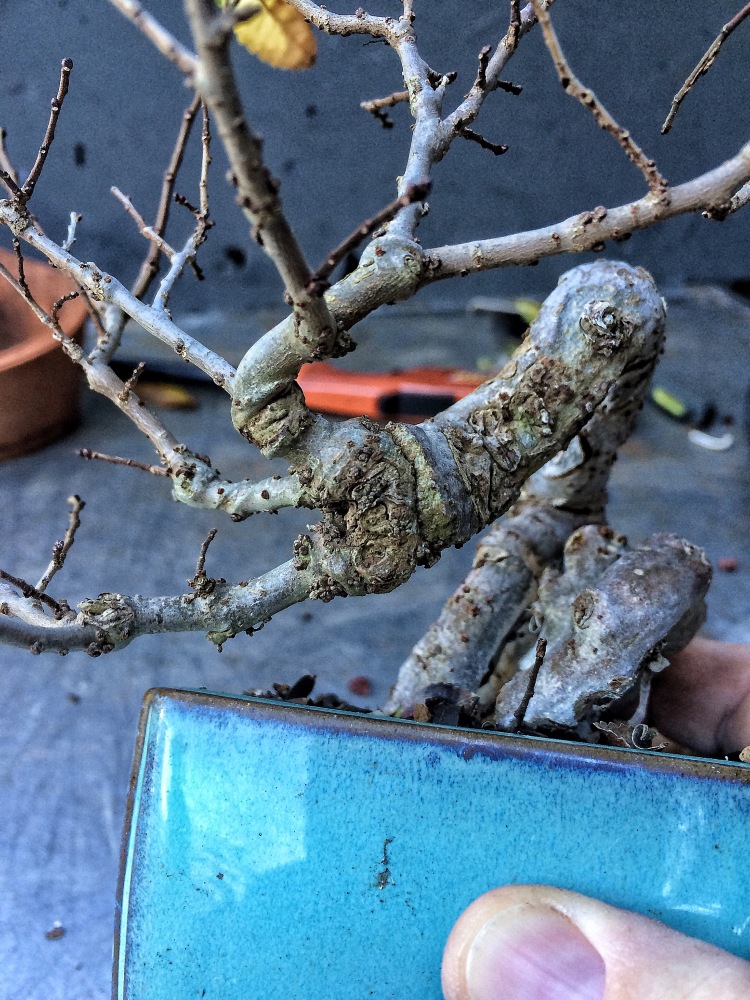 I’ll deal with that later. First, I can’t get the damn tree out of the pot. 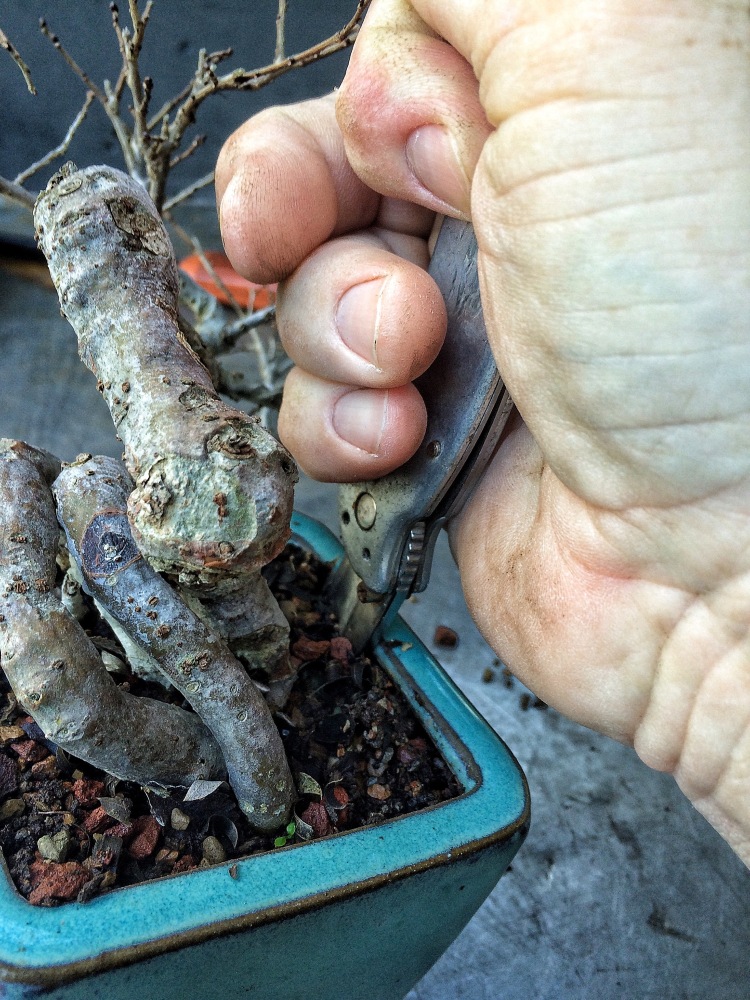 Maybe some pushing from below? 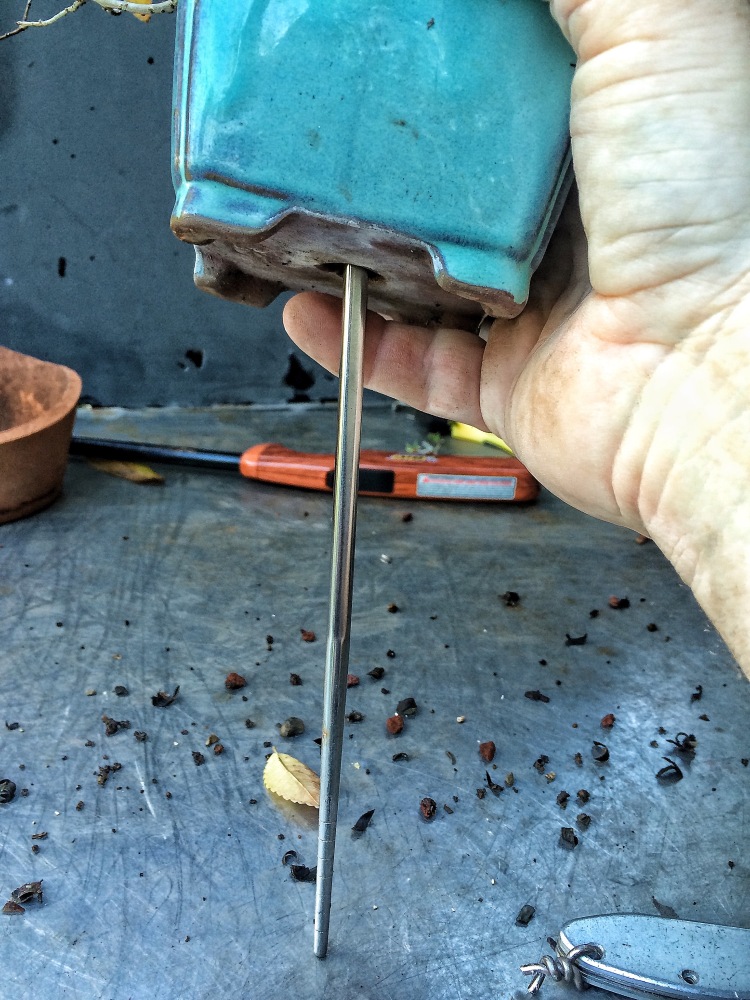 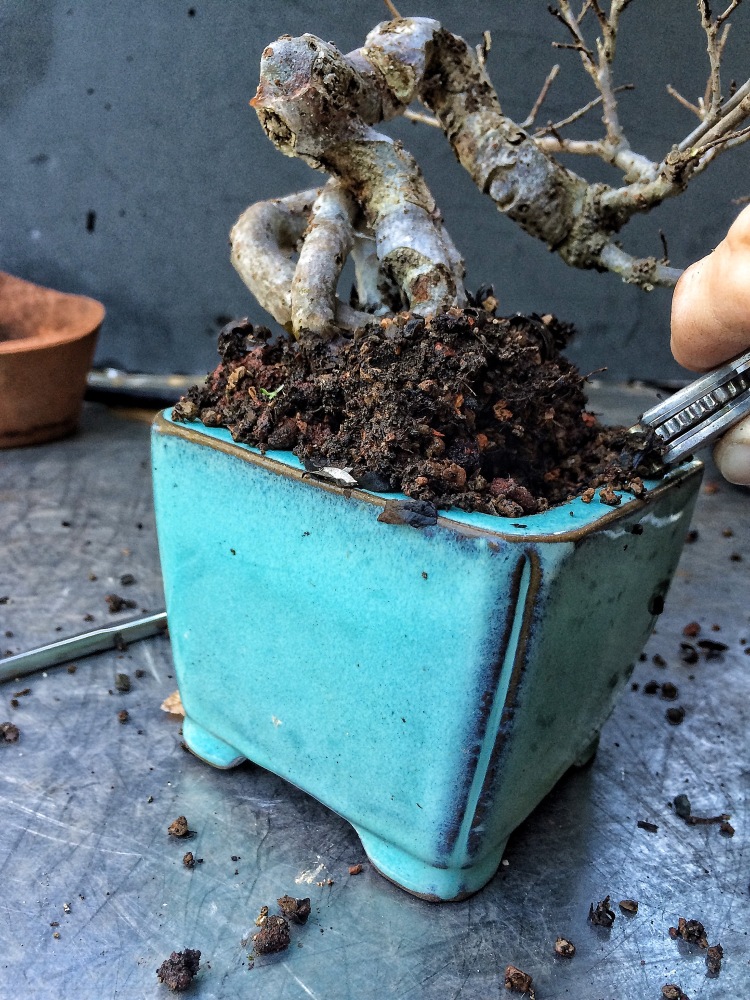 Finally.
Let me introduce you to the new pot. 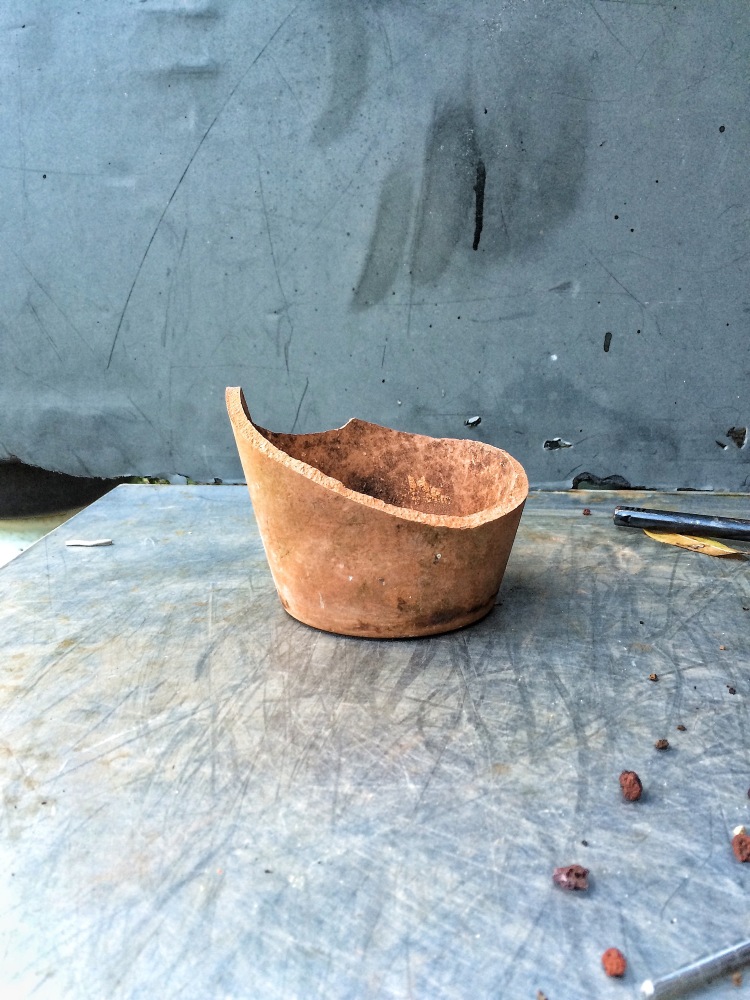 This unique piece is made of a highly refined, Italian clay (and, in fact, the pot was made in Italy). The clay body’s name is roughly translated as “baked earth”. The red color is the result of the high iron content found in the earth from which it was mined.
The techniques that were used in the making of this vessel predate every civilization that is existent now. It’s truly an example of traditional methods and craftsmanship. 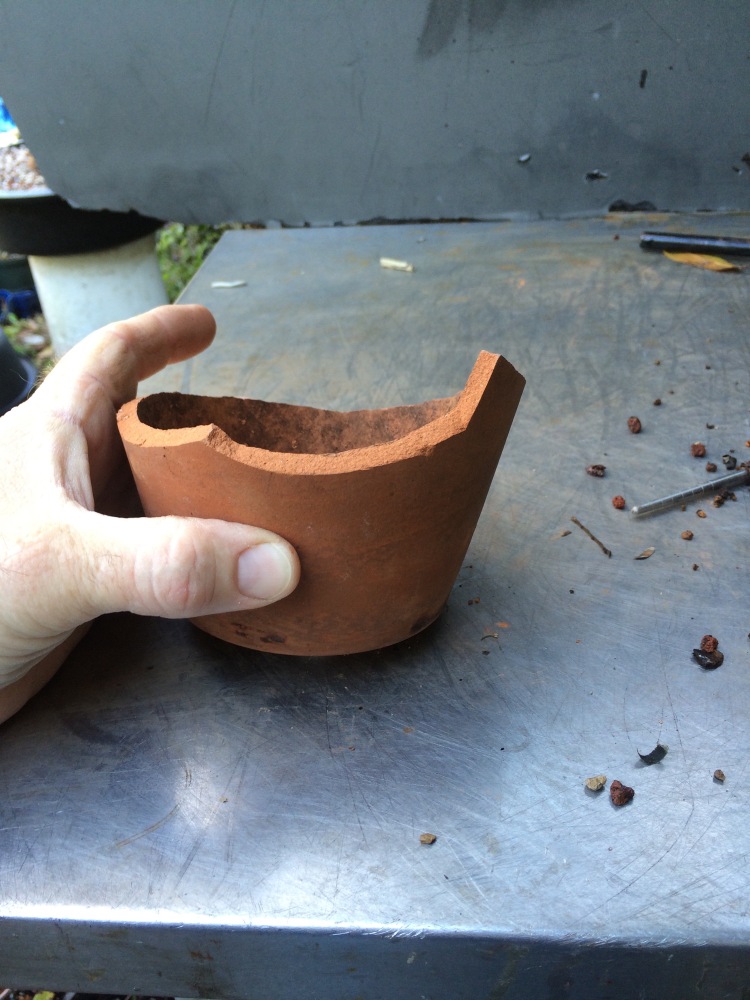 This specific pot was customized for bonsai use (most pots like this have a mass produced elán) complete with hand drilled tie-down-wire holes and a hand chipped, artistic, leading edge. 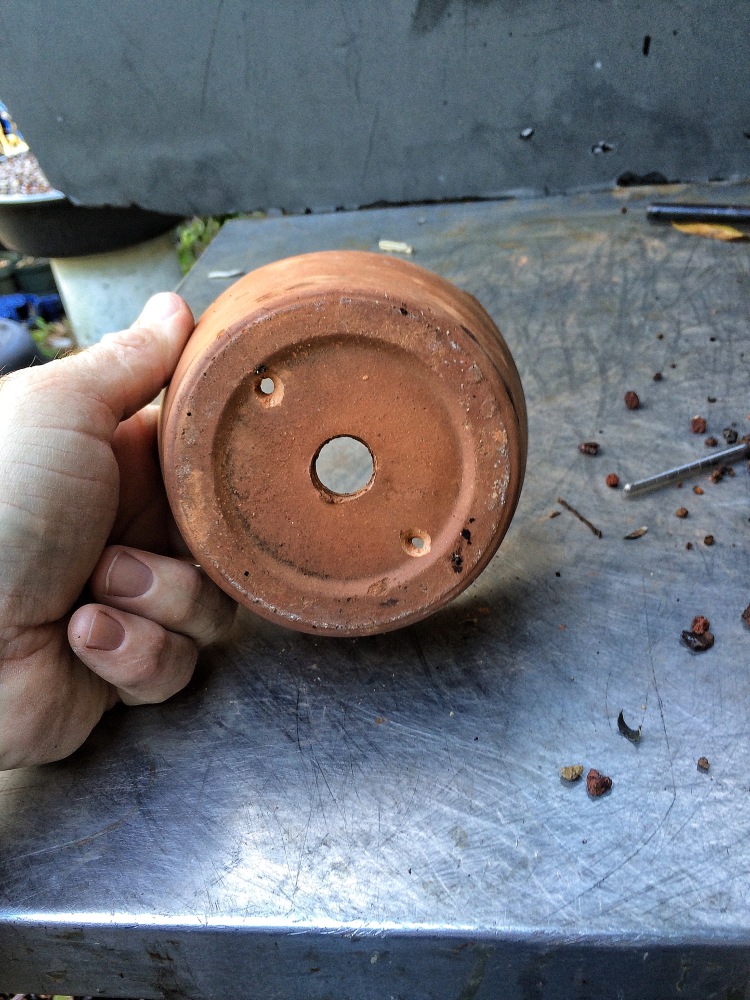 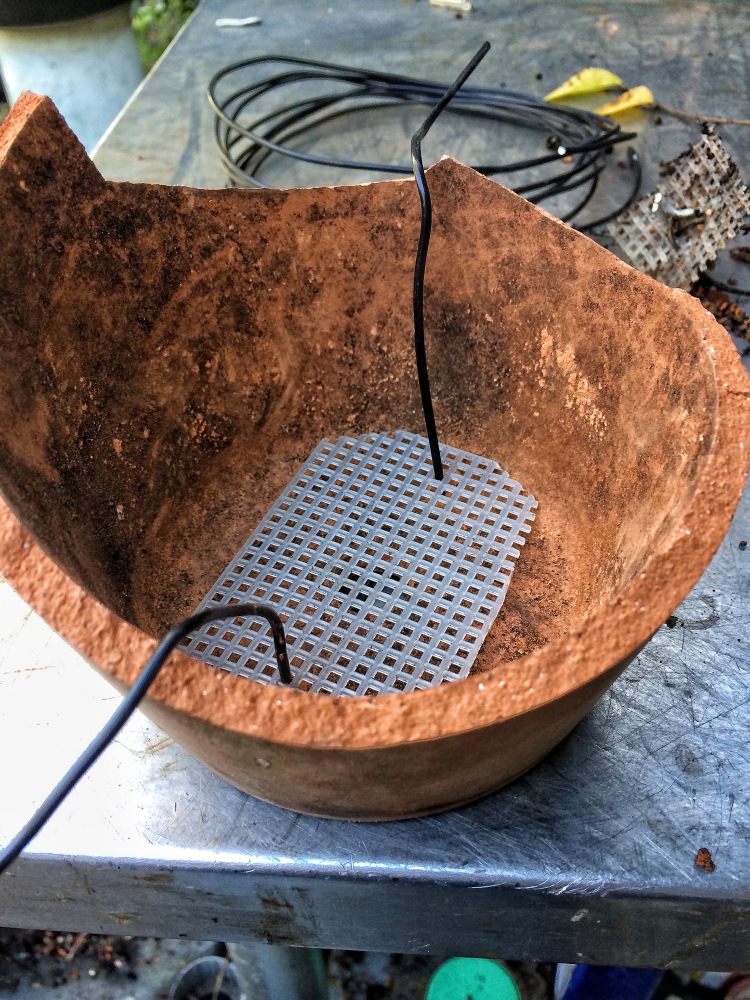 The pot has, to sweeten its value, a patina that really shows its use and age, a detail much prized by many bonsai practitioners.
And with that, I’m ready to place the tree into the new pot. 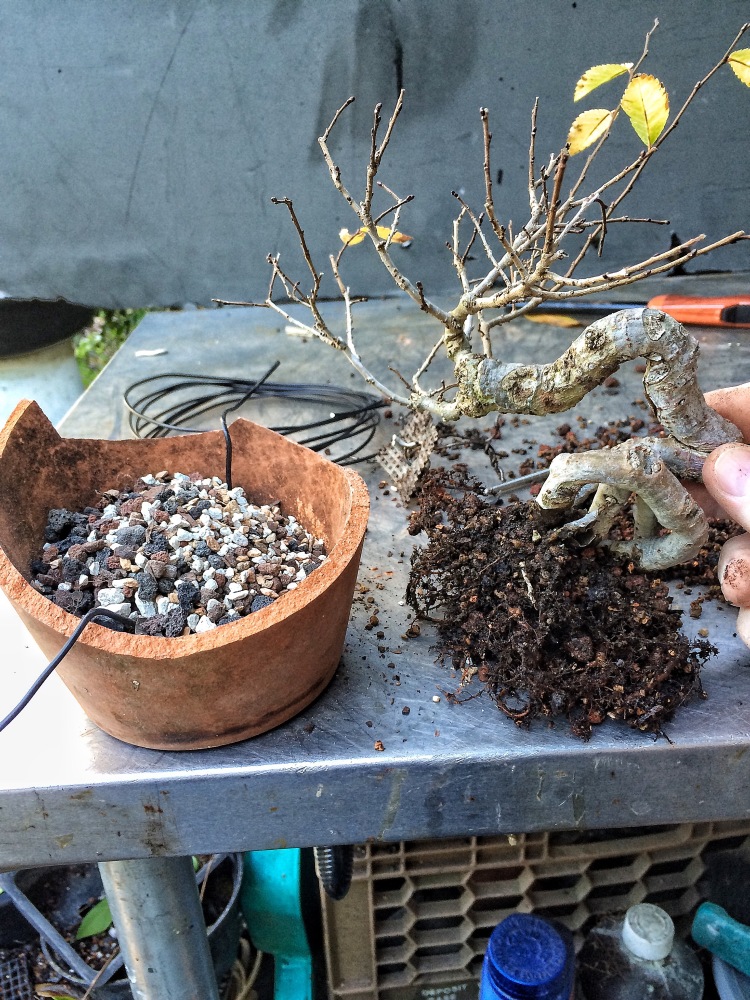 I had said that the front was here. 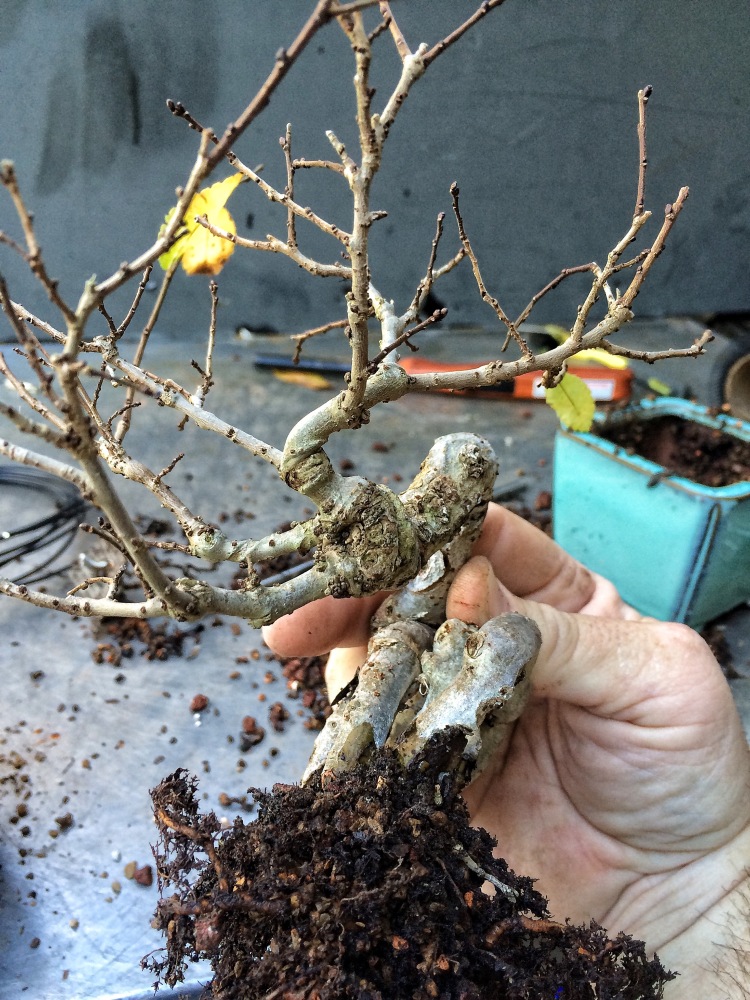 The problem is that all the branching goes in the wrong direction (except the apex, the blue arrow) 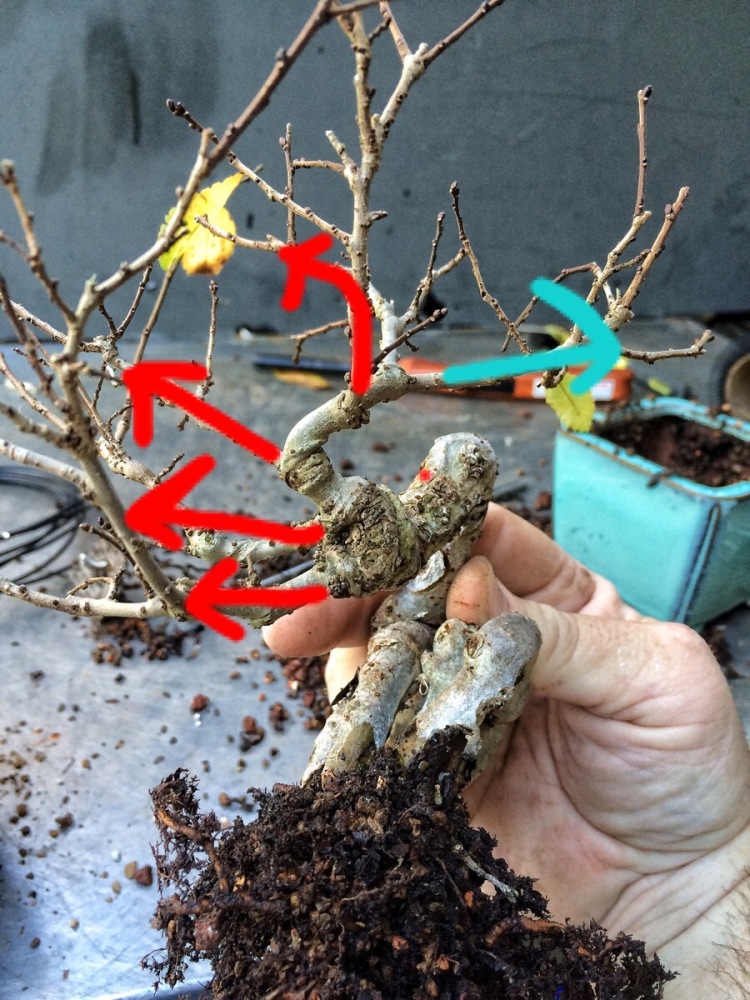 If I turn it around, and use some wire, I think I can just get it to work. 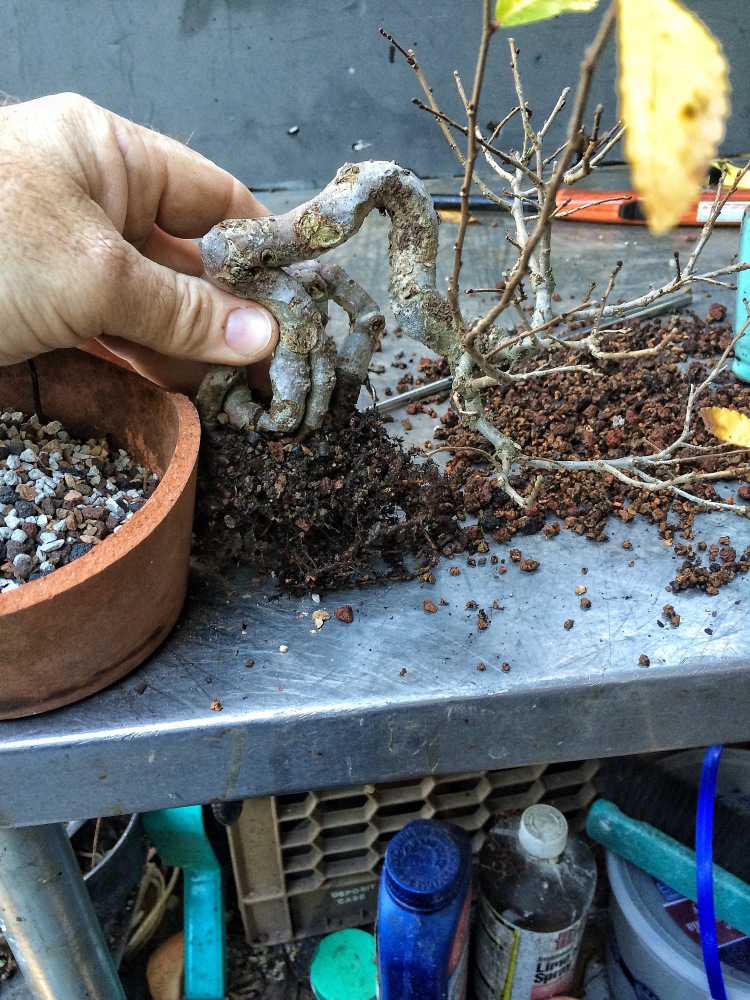 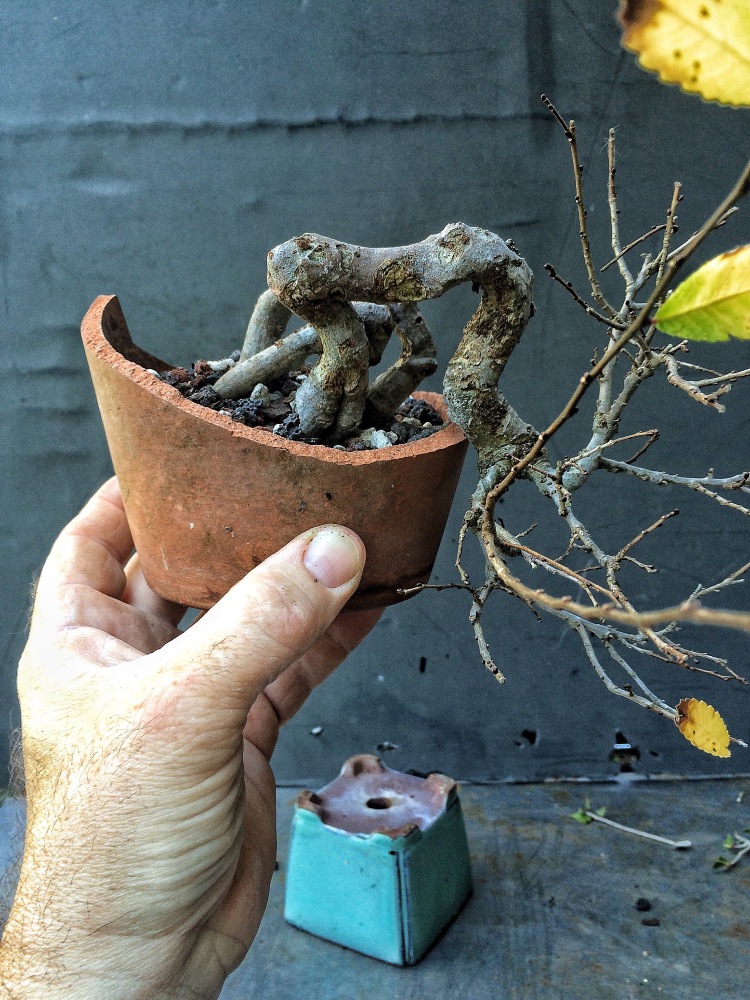 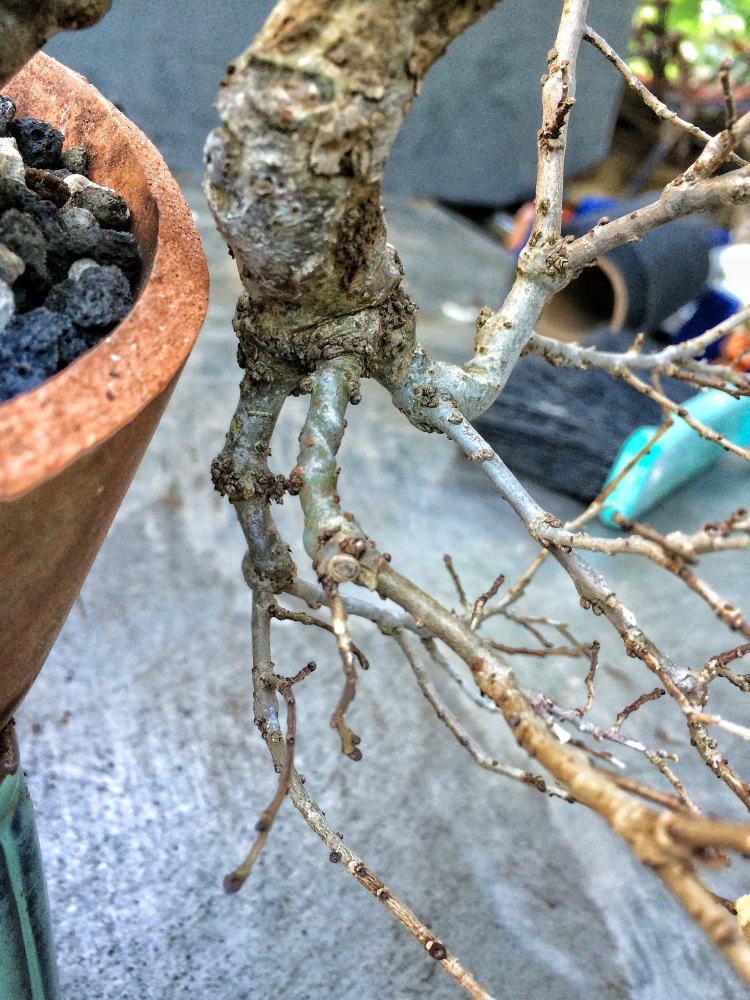 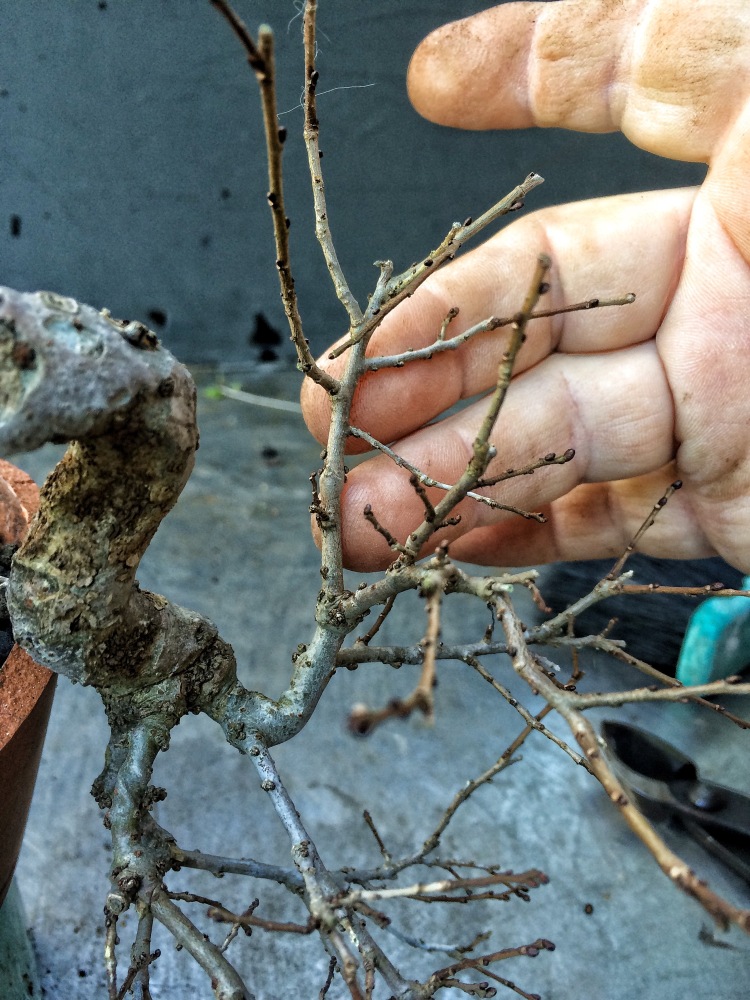 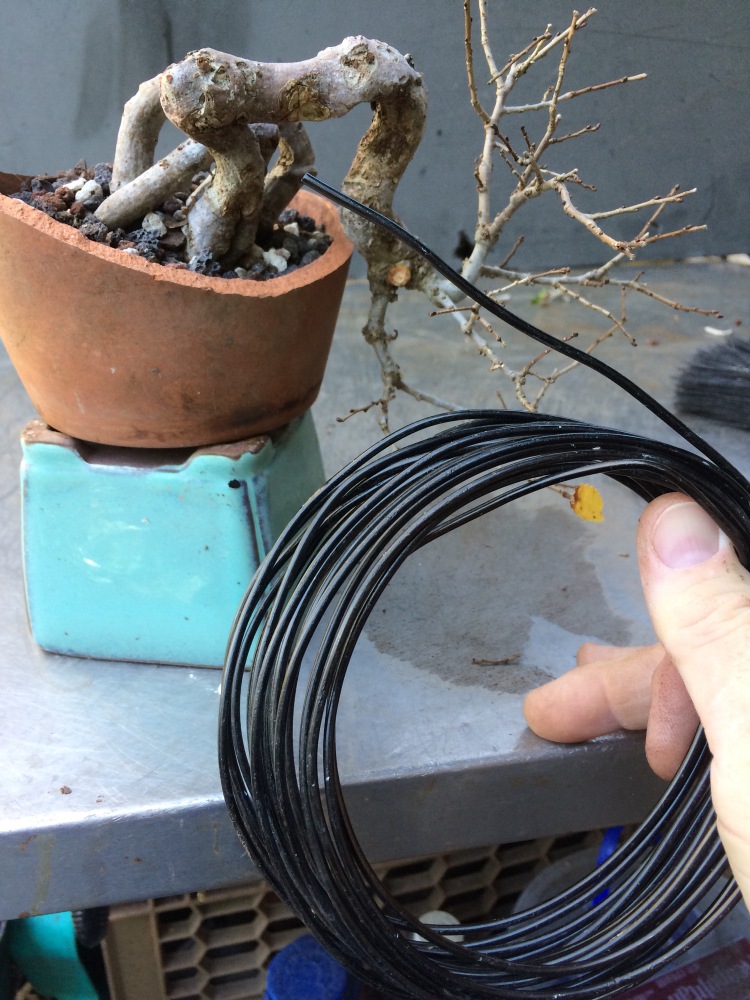 And you now have an uncle named Robert, often called Bob. 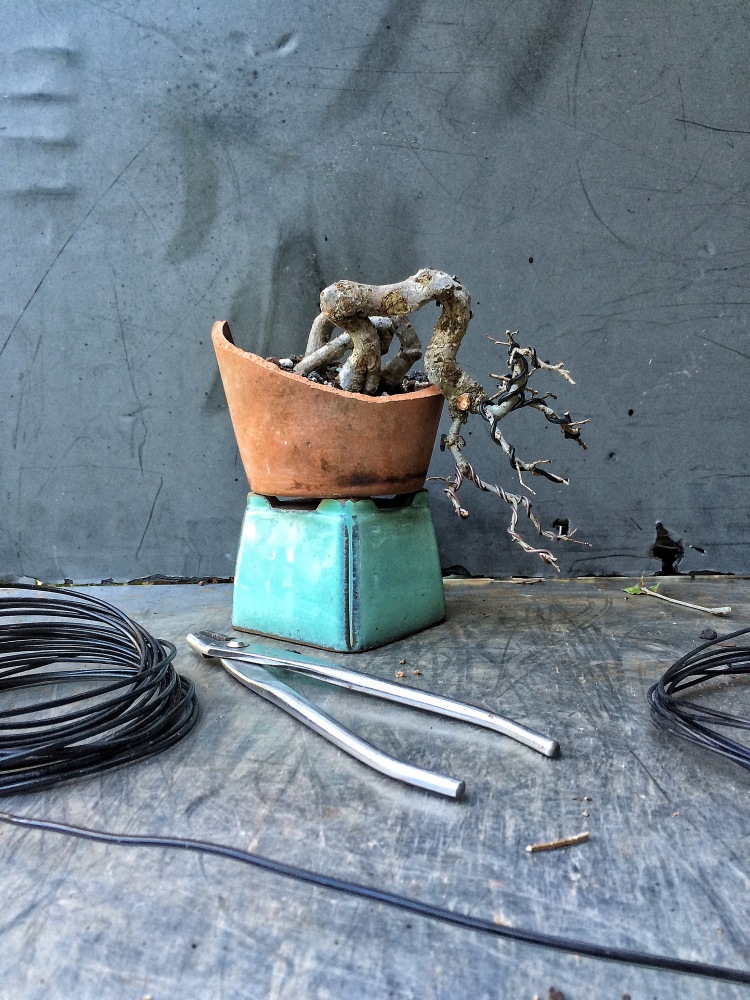 Ok, it is just an old terra cotta pot I chipped into a semi-aesthetic shape but I think it works, along with changing the front and rewiring the structure.
I did lose some ramification in the restyling but it’ll grow back quickly. It’s an elm after all. And the taper will be improved.
And I think, if I ever display it, I’ll use the old pot as the stand. 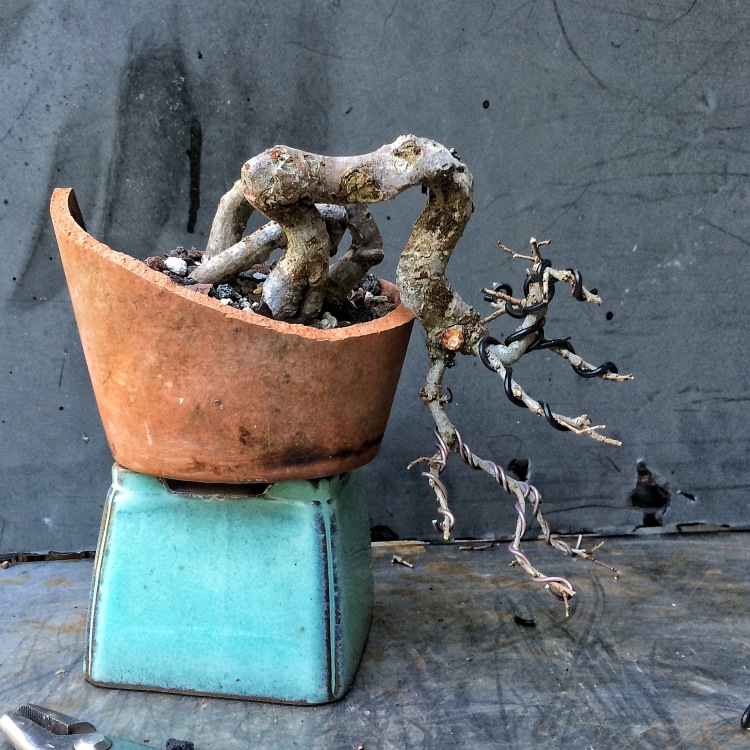 That’ll annoy some people for sure.