I’m thinking that this tree needs to be in this rock. What about you? 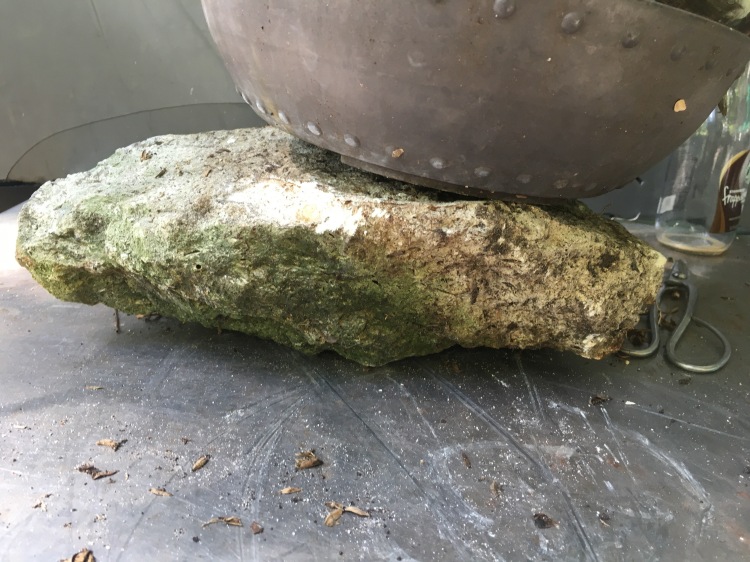 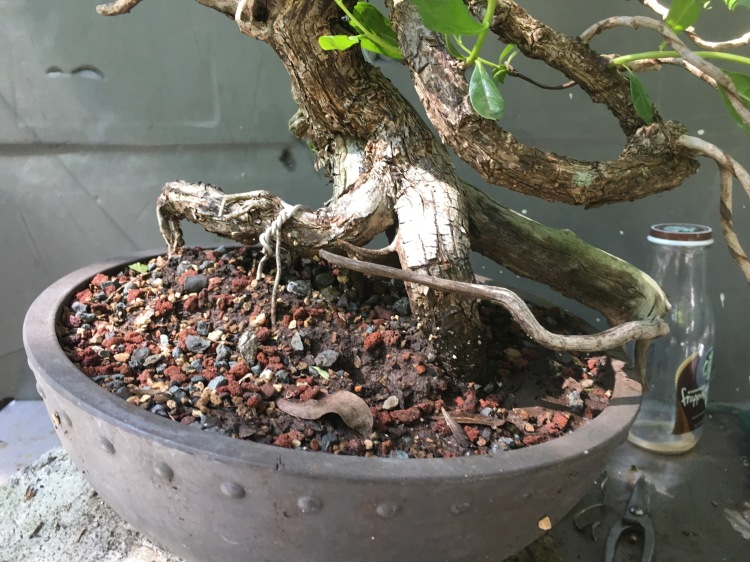 I have experience putting big things into small places…… 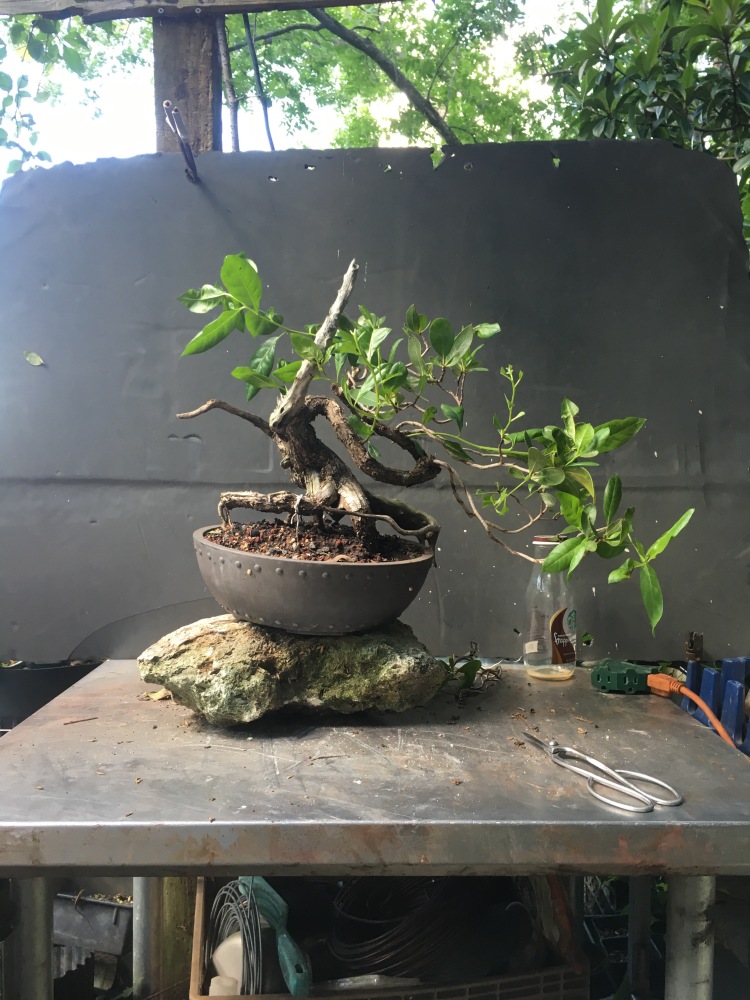 I know how to work my tool.

That, my friends, is a DEWALT 4 1/2 Inch Compact Small Angle Grinder – 11 Amp, 11,000 RPM, Paddle Switch, Model DWE402 sporting a 4″ diamond impregnated stone/concrete grinding cup wheel. Do not use while consuming alcoholic beverage or without ear, eye, and breathing protection!!! Jeans or leather pants are a must as well. I prefer leather cuz I’m a rockstar. Ride the snake, baby. To the lake. 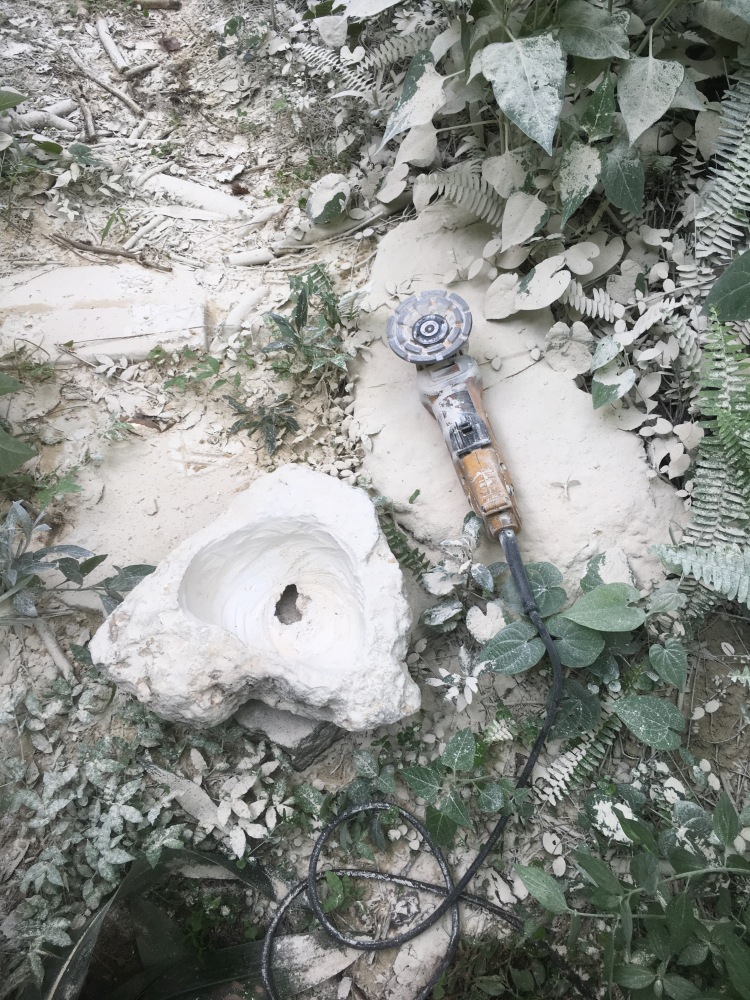 We had a rock. The rock is what some people call Florida cap stone or cap rock, it’s a type of limestone, oolitic carbonate, and the fossilized remains of coral reefs. It’s what the Florida peninsular is mostly made of; our aquifer resides in limestone caverns underneath our feet. We don’t really have any other rock except it. Unless you count coquina….

Fun fact: there is a mysterious castle in Leisure City, Fl made entirely out of cap stone. It was built by a Latvian immigrant named Edward Leedskalnin in 1923 in Florida City using, what he claims, the principals of magnetism, to move the huge rocks, most weighing more than ten tons. More amazingly, Ed, as he was known, moved the castle in 1936 to the current city (10 miles away). He built the castle to honor his lost love, who he called his “sweet sixteen”, who rejected him before he moved from his home country. There is a Billy Idol song called “sweet sixteen” that was inspired by the story.

Here’s Ed next to a sculpture. 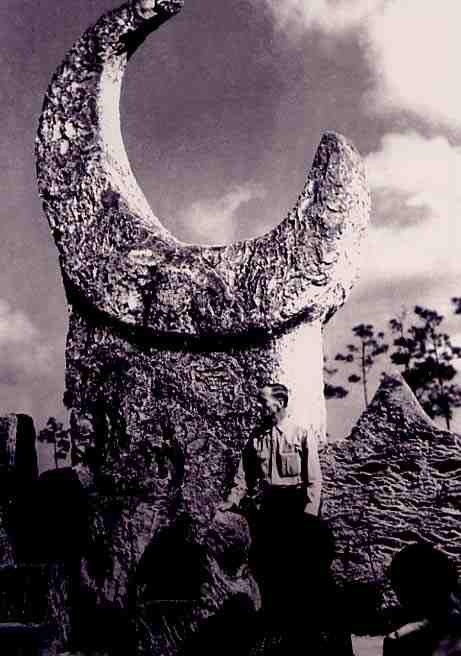 And the sculpture garden.

Stole those pics from Wikipedia.

It’s weird but women like to pose by these monoliths in sexy outfits. Look it up. Here’s a Website you can visit to amaze and inform your brain. And have a chuckle.
He accomplished all this stonework by himself. No machines. Maybe that’s what attracted all those winsome lasses? Makes me feel a bit small compared to his drive and energy. Or more sane.  He even suffered from tuberculosis his whole life. If you’d like to visit, it’s located 27 miles south of Miami on The Keys highway. Pick me up on the way down, we can make a day of it. Get some Cuban sandwiches, drink some rum and smoke cigars, and visit my friend Hiram. He has some nice bonsai. And good rum and cigars.

Anyway, back to my humble little rock. It’s all carved out. 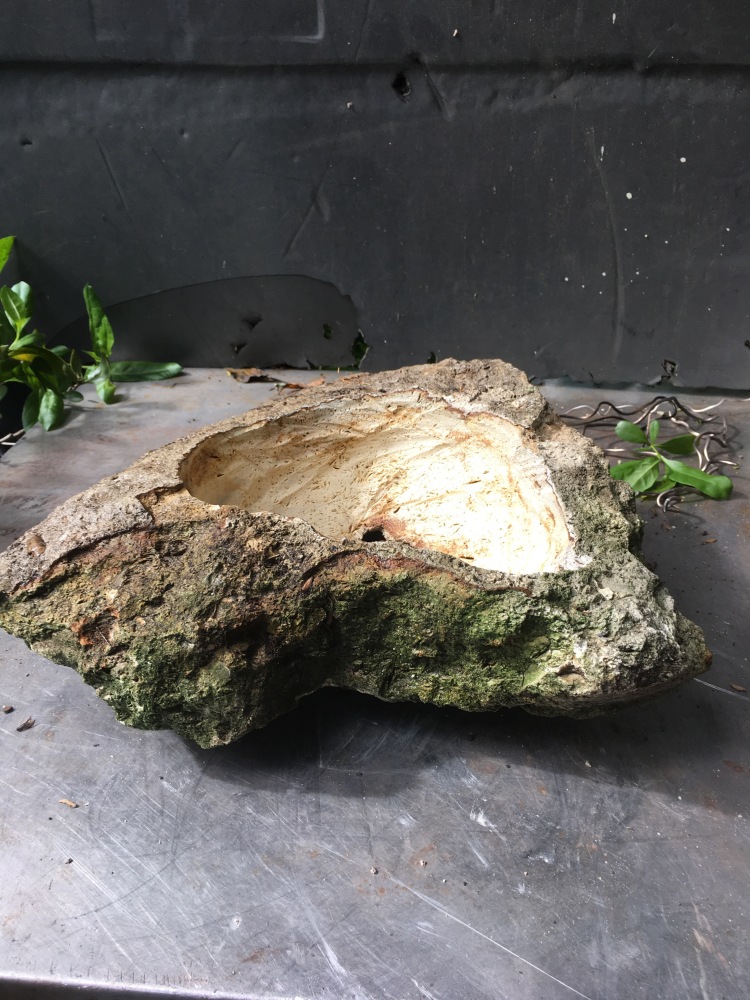 It should be deep enough, and have good drainage.

I drilled some holes for tie-down wires.

And we are ready for the tree.

Maybe not so much.

I carved out a bit more and I don’t think I really need this root.

Not really much going to it or from it. Delete it.

Magically, we have another Jin! 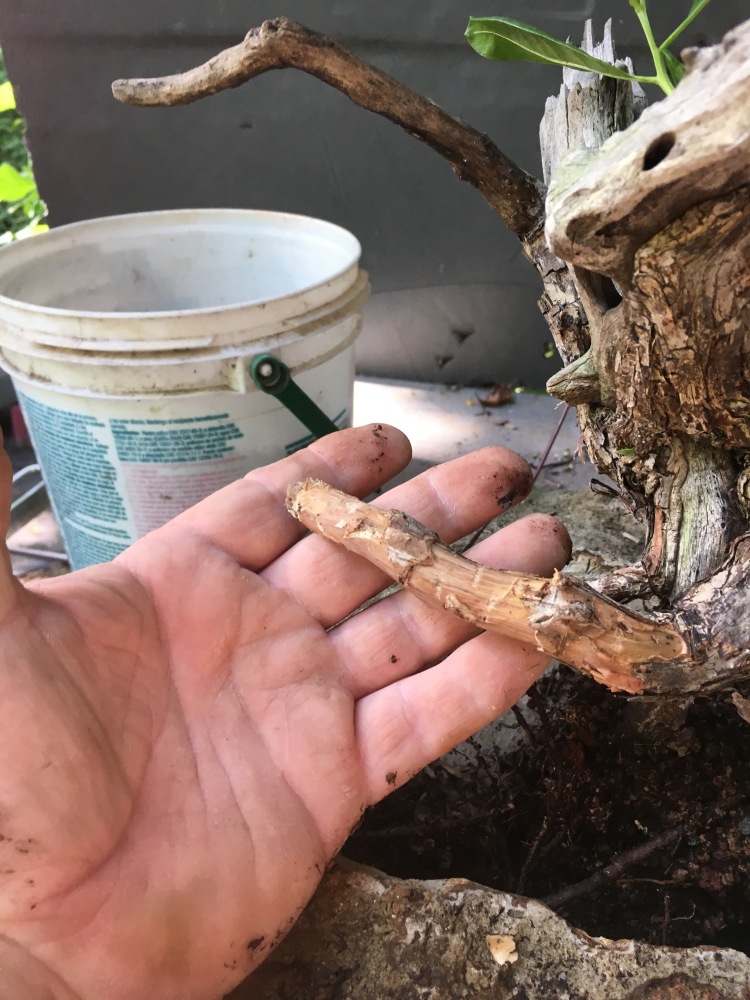 I’ll carve it at a later date.

Now for a little style. I think it needs a bit. 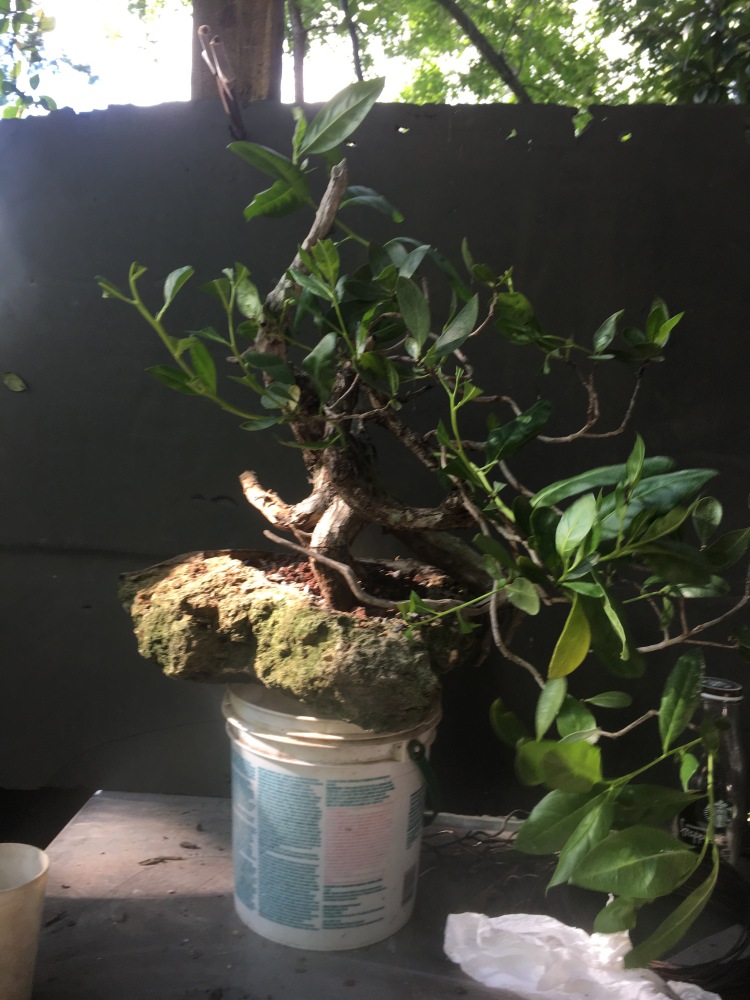 I’m going to defoliate it some. First, to help with transpirational water loss and, second, to see the structure (or more precisely, so you can see it). 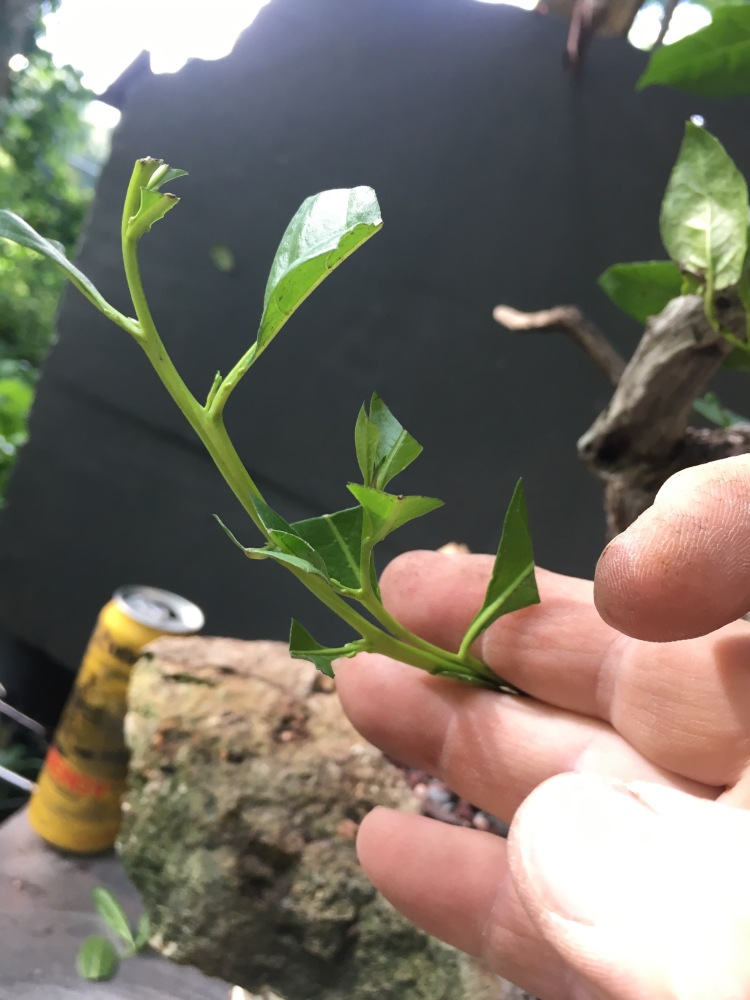 When I defoliate a buttonwood, I leave 1/3 of the leaf intact. There is a small gland, used by the buttonwood somehow (once thought to expel excess salt), that is important to the health of the tree. I try to preserve them when I can. There are some who think that the gland weeps a nectar for ants or some other insect to attract them in a type of symbiotic relationship. The world may never know.

I’ve just recently noticed a similar gland on the bottom of the leaf along the center of the middle vein. 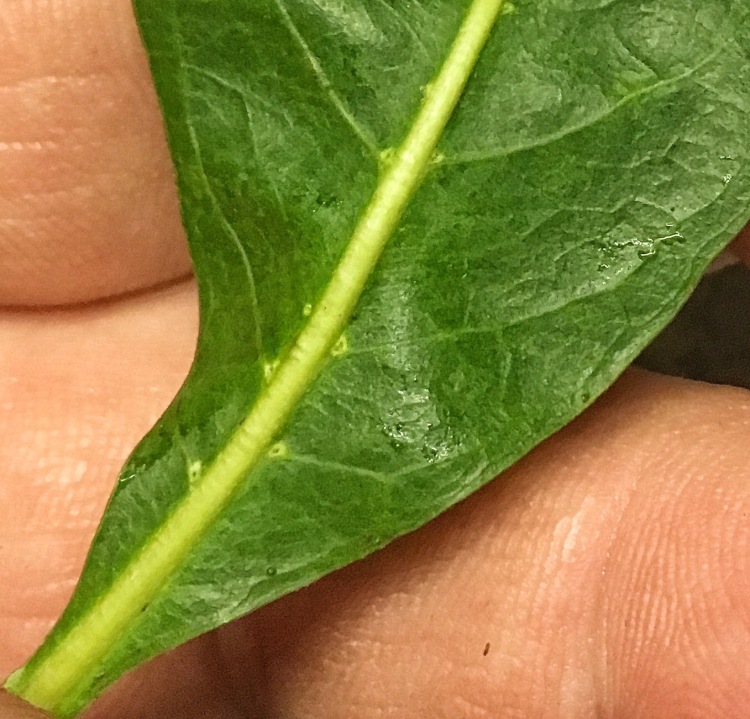 Perhaps it’s these glands that expel the excess salt from the brackish water marshes that buttonwood are native to.

After some wire. It fits pretty well. 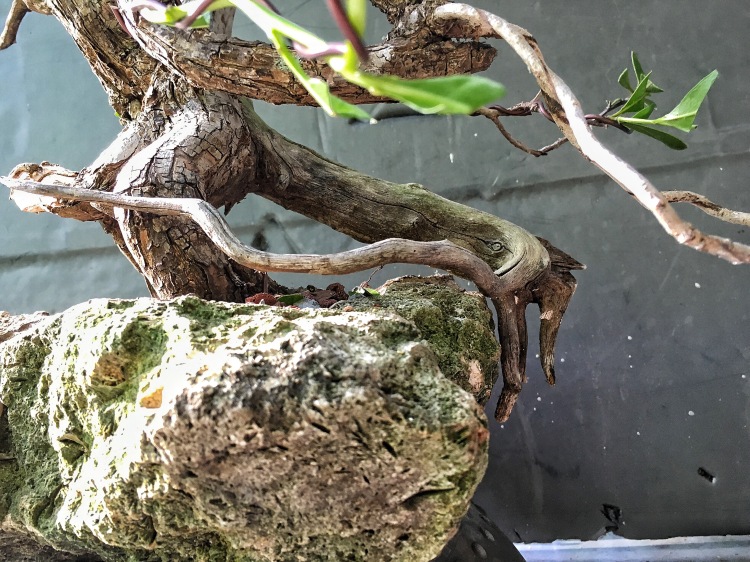 Whenever I chew up the roots bad on a buttonwood (or any tree) I’ve been putting sphagnum moss on the soil surface.

It helps to keep moisture in and helps in root formation (I don’t know exactly why but it’s why we use it for air layering).

The other side. Though it looks like the back….side of some bird or dragon. See it? The head is on the bottom right. 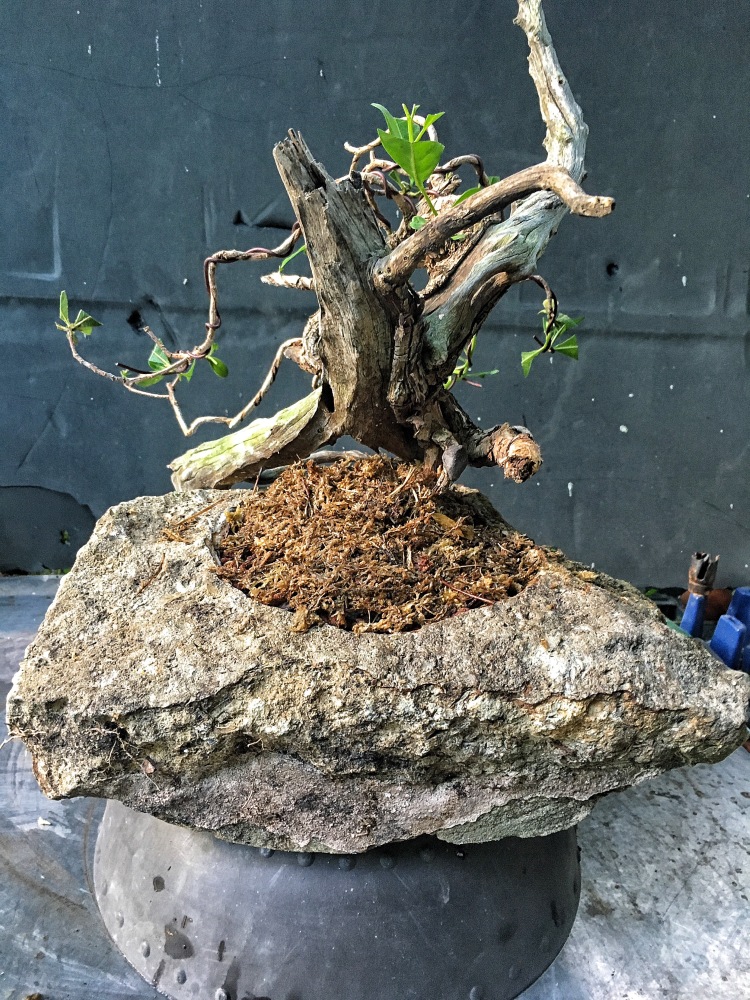 I’ll keep you informed as to the progress of this tree. I like it in the rock though. Very natural looking, don’t you think?

Of course, that’s what they say about the dead guy at a wake. Let’s hope this isn’t one of those instances here……