Here I sit, in a seat that I fit, revisiting a green island ficus that I showed you all last year or so…( in this blog post as a matter of fact).

But haven’t really touched since then. 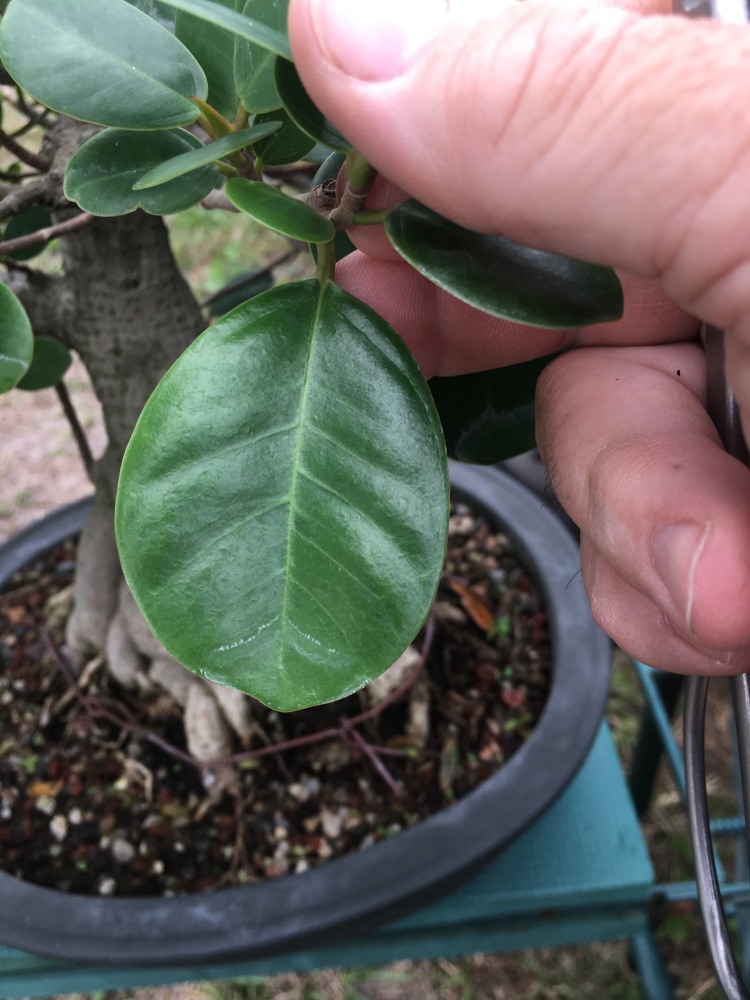 Some varieties of ficus are funny in a way that they won’t grow if you’re ignoring them. One wold be the ficus Burt davyi. Another is the green island. It’ll just sit there and look at you if you’re not actively pruning it or repotting etc. which is what happened to this one.

I mean, damn, looking above, you’d think I would have gotten a little more wire cutting than this? I watered it and all.

Anyway, I’ll be removing the old wire, pruning and defoliating it (to get those juices flowing) and seeing if the cut paste I used….

….had any effect at all.

I did get some interior shoots that may or may not help. We will see after defoliation. 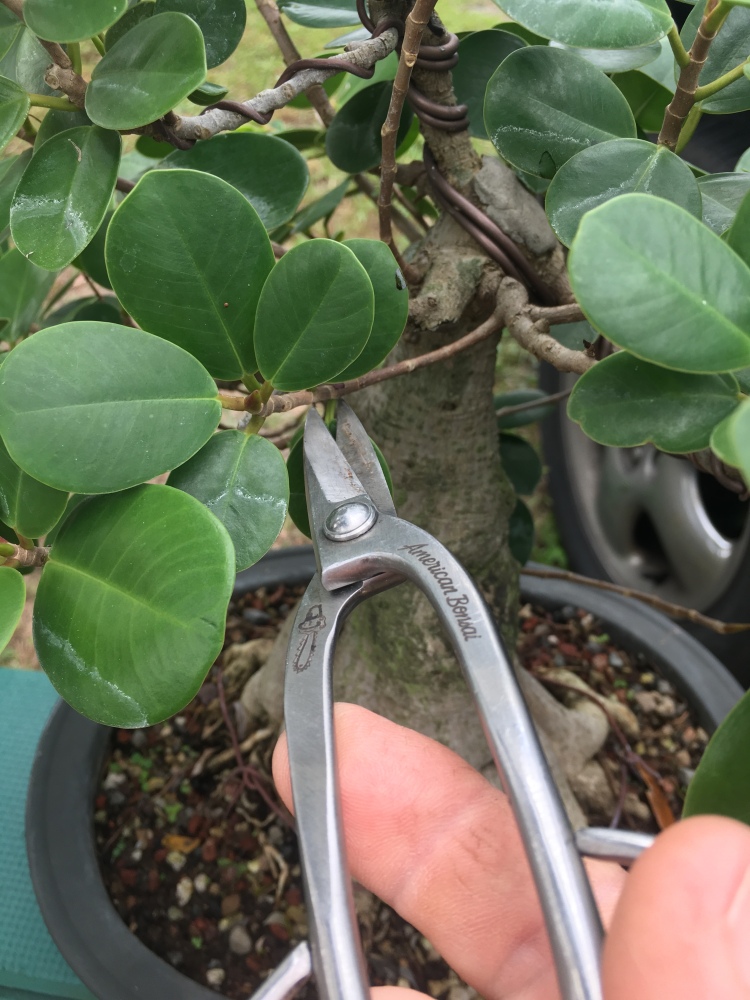 Green island are prized for their ability to reduce the leaf size significantly.

Which makes up for their slow development I guess. I still like me a fast growing tree to keep me honest.

Not saying I’m not getting development but man, it’s slow.

And it kinda fills in like a juniper, meaning that, if you leave it alone, it builds its own canopy.

It hasn’t thickened much. It’s kind of amazing that it hasn’t.

But kinda fortuitous too, the wire scarring is just about right (I maintain the concept that, on a ficus, if you don’t have wire scars, you’re just not trying hard enough. Putting wire on a ficus and not letting it cut in means that the branch hasn’t grown enough to set whatever bends and wiggles you’ve put in the branch).

This will grow out. The branch needs to be at least twice as thick as it is now. Think about that…..those scars will be long gone before that.

Now let’s check the cut paste….or putty, in this case.

Well. That’s discouraging. I was experimenting, to see how well the putty accelerated the healing. 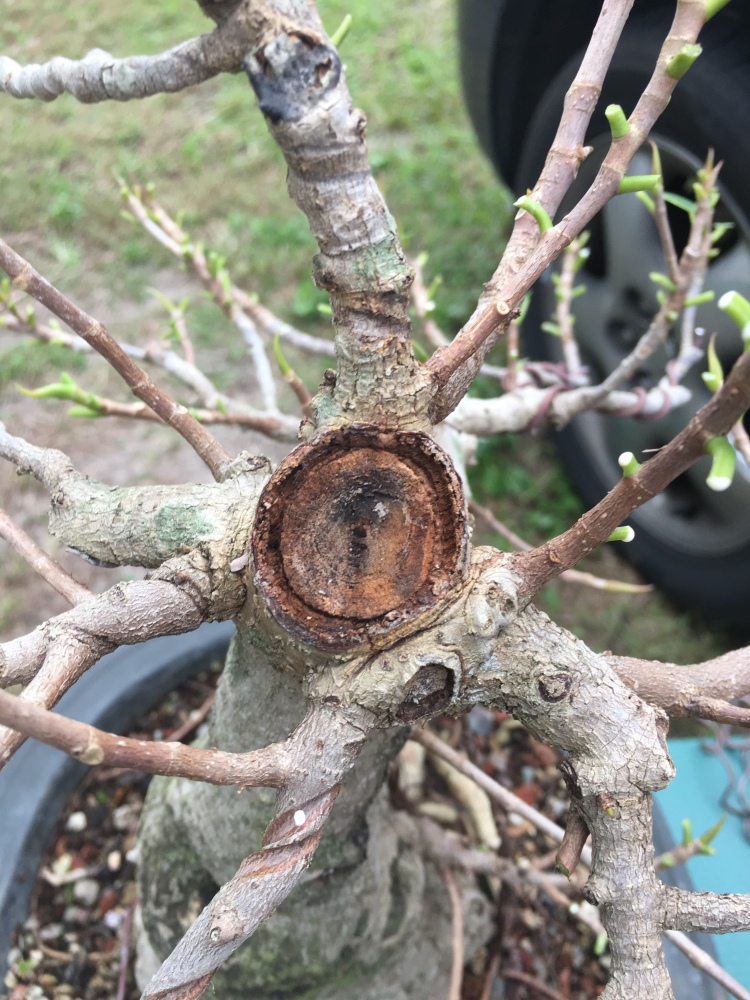 There is a callous that’s started but, in my experience, it’s not any more healed than if I hadn’t used it.

Ah well. I’ll get back to it in a minute.

Here’s how a ficus heals. Not like a regular tree really.

The callous keeps rolling inward with the interior wood rotting, making way for the healing.

Let’s get rid of some superfluous new branches. 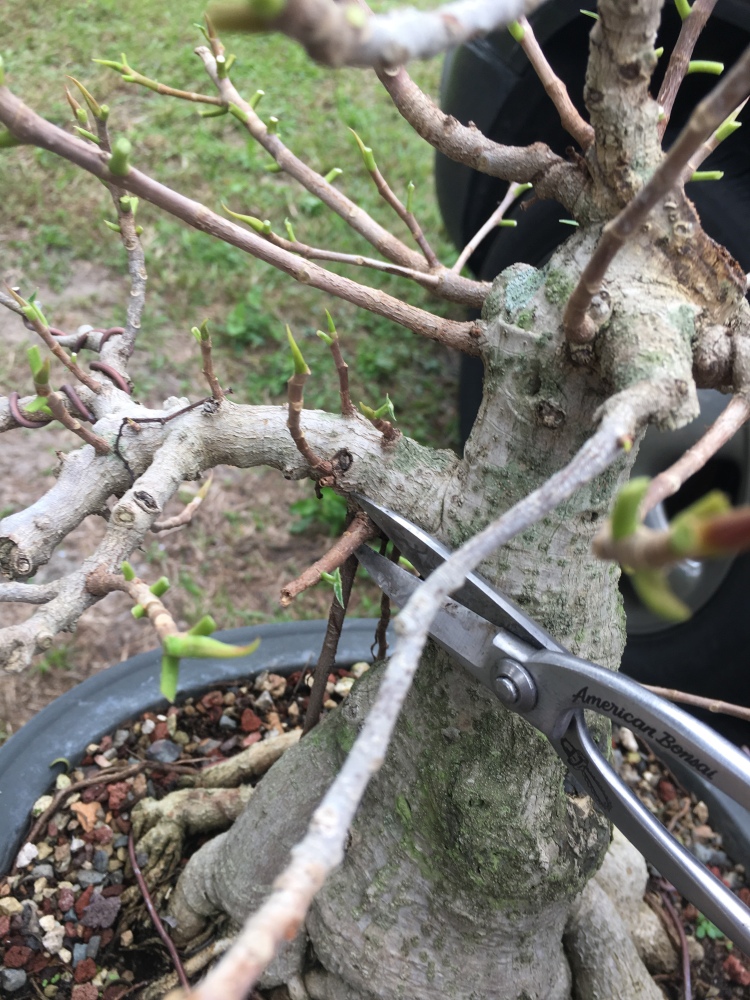 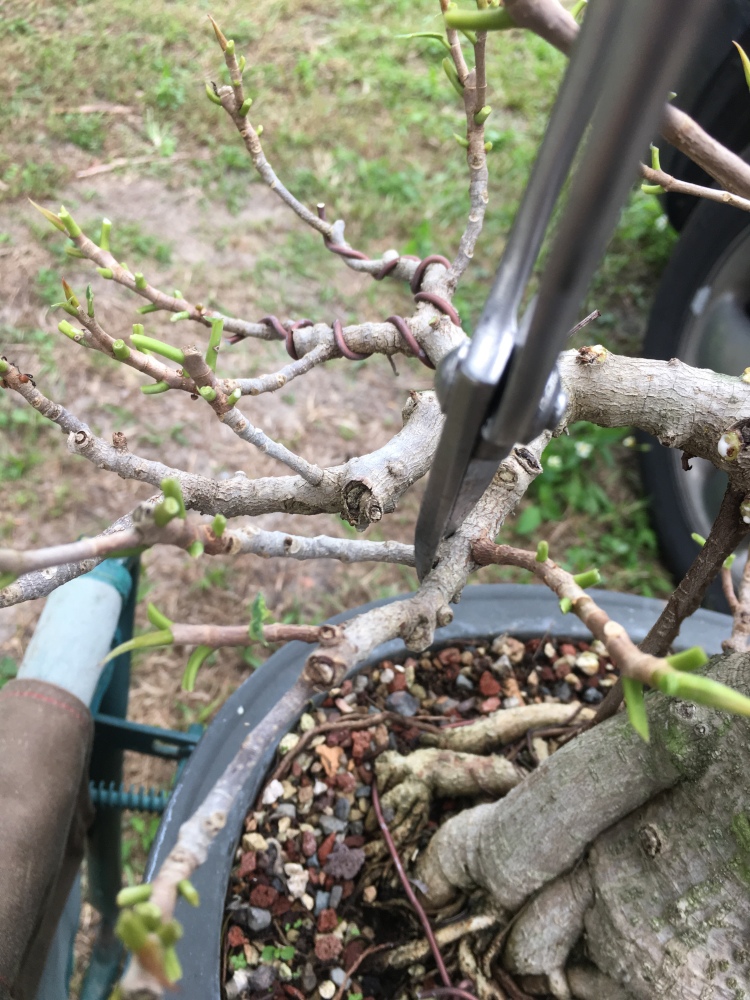 This is all routine pruning. If I had been paying attention during the growing season, and pruned off these in-needed branches, and focused the growth into only the branches I needed, maybe I’d have had more development.

Sometimes, letting a tree grow unchecked is good. Oftentimes, though, you’ll get better and faster development with controlled and directed growth. It depends on the species of course, but on this one, I should have been more diligent.

And now, the big cut. This area just has too much going on. I had left a lot of it in the last post just for sap movement and to have some structure….

….but The tree threw another branch in a good spot so…..SNIP!

And I think that’s all I need to do.

Now I can dress the wounds, the old one and the new one… 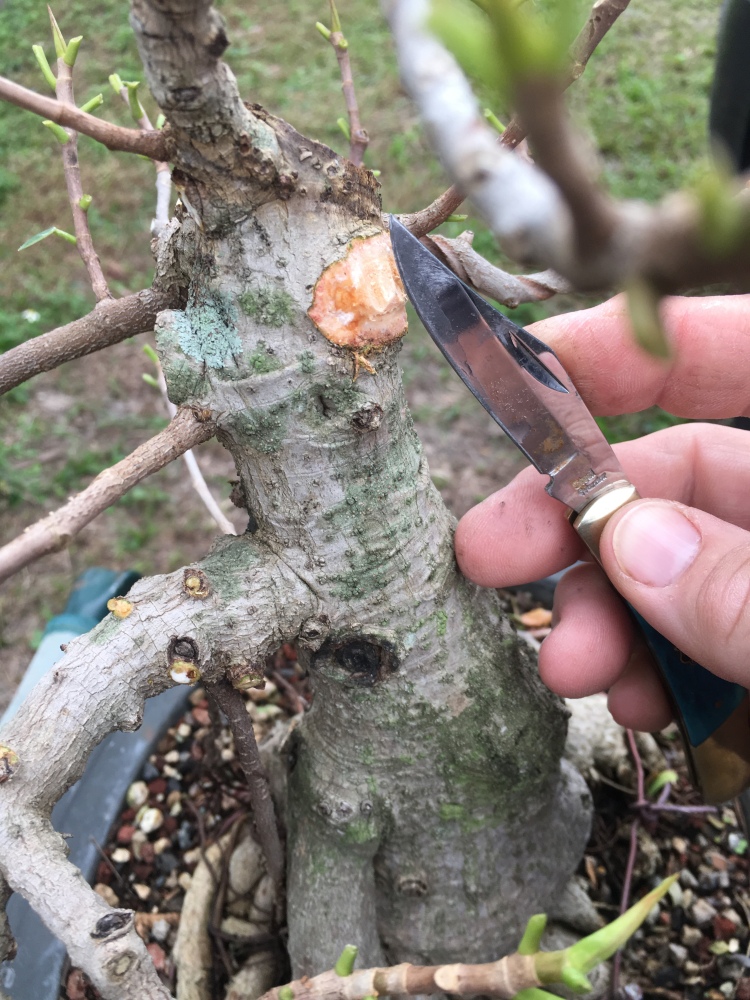 Above I just shave it smooth.

Below I first need to dig away the rotted wood… 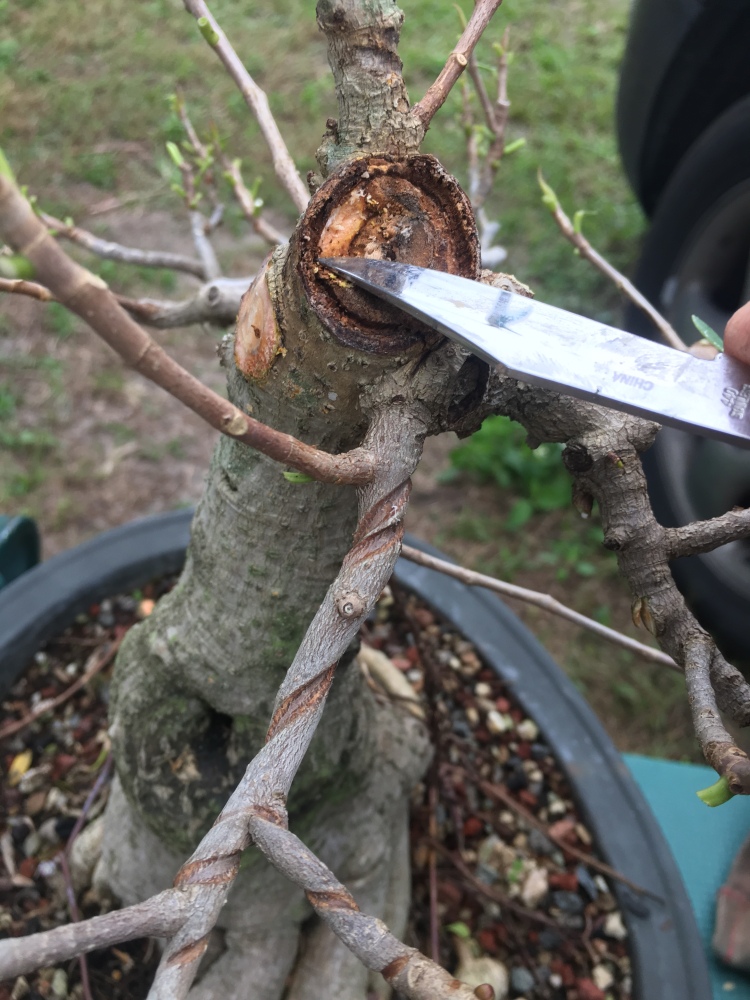 ……and then re-cut the edge to help stimulate new growth. 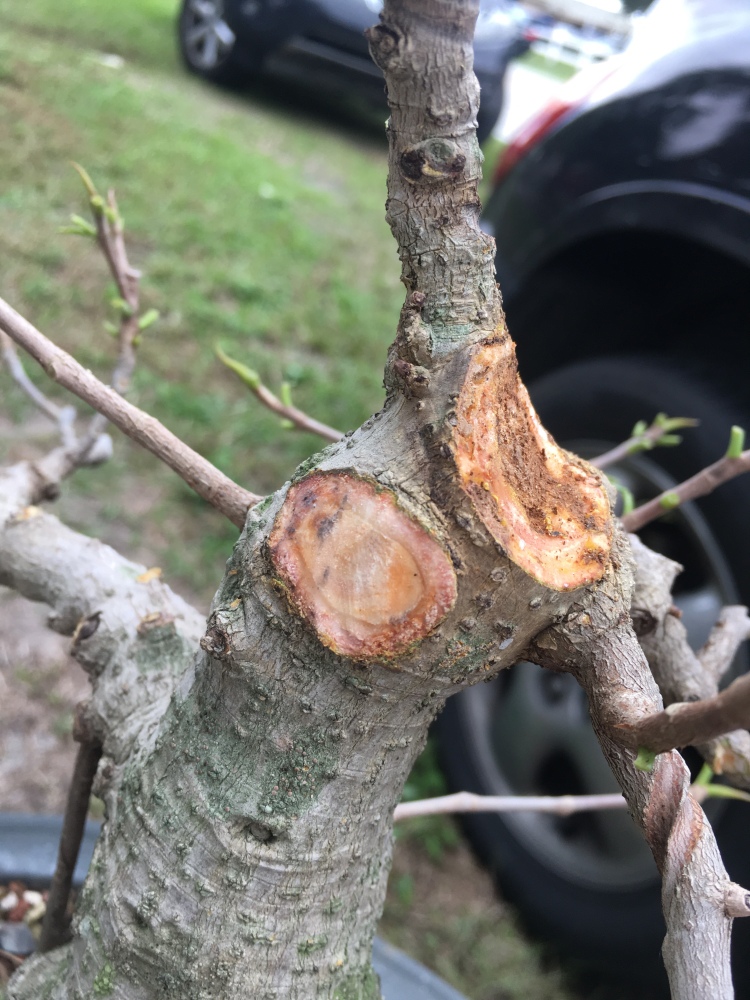 And that’s all I have left to wire. 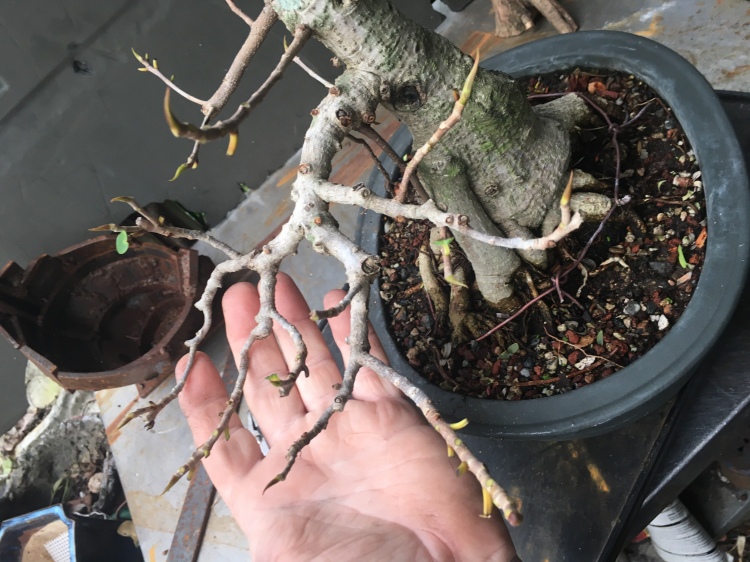 The first branch is the most ramified, of course.

Full disclosure, it’s been a week from the first work and Now and the terminal buds are opening already (the bud’s protective structure is called a stipule. On a ficus, it’s usually pointy and falls off when the leaf opens.)

I’ve noticed that (through not having more than an hour at one time to put into a tree sometimes) I’ll get better results from the defoliation and then wiring after waiting about a week.

It might have to do with the unrestricted sap flow that an unwired branch allows.

Here’s that new branch that will take over the visual gap I created with that big pruning.

And even though the scarring is minimal from the wire, I’ll still apply the new wire in the opposite twist. This will mitigate the scarring and create a more rugged bark in the future.

All branches down, no pun intended (this tree kinda screams for a downward sloping branches, as though it is a conifer in the snowy north. I tend to style my ficus in a banyan, deciduous, or tropical style, with branches horizontal or even up with a 15 degree angle. Tropical trees and deciduous don’t have to shed a snow load. Deciduous drop their leaves for that purpose and, unless something is very wrong, we don’t get blizzards in Florida. Except at Dairy Queen)

I’m still missing a branch right where my hand is hovering above.

But, as the title states, with some trees, you gotta build the tree “one branch at a time”.

To illustrate the principle, this is how ow the tree was last year after my first styling (for those that were too lazy to click on the link). 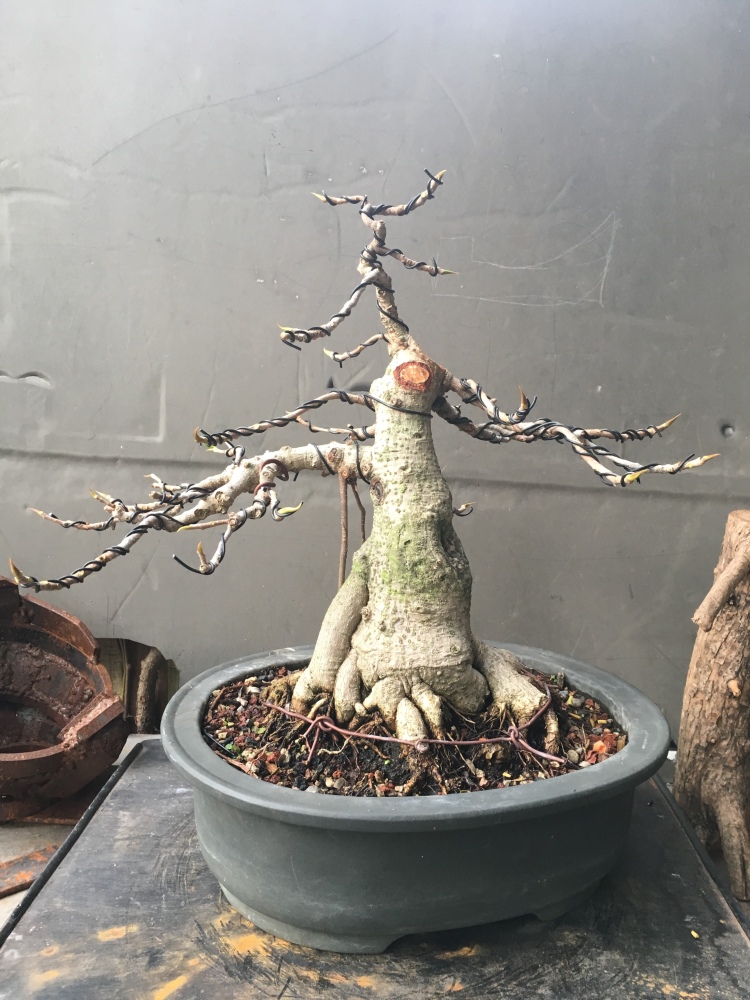 One branch at a time (or two, three or four. I’m not good with numbers…)

I guess it’s good for ones character to have to wait for some things, though it rankles a little, with the tree being not only a ficus, but a ficus in Florida even. As a friend used to say all the time “It is what it is”.

The next post will be a contrast to this one, I’ll show you the tree from this post, which was published on October first this year (2018) and how much it has grown in just two months in Florida, in autumn.