What we have tonight is an American hornbeam (tonight being a few days ago as I sat waiting at the Tae Kwon Do school my children go to. I have two second dan black belt children, and my wife who is also at that level. This night I’m awaiting my middle son as he is in his Kummooyeh class, which is Korean bow and sword training. It’s a fairly new discipline, the master who invented it is still living).

This tree (Carpinus caroliniana) was styled by David Cutchin, who also collected it from the forest, at a BSF Convention several years ago. I won it in the auction.

I bid on it for several reasons. David and I share a passion for native Floridian, and American for that matter, trees. 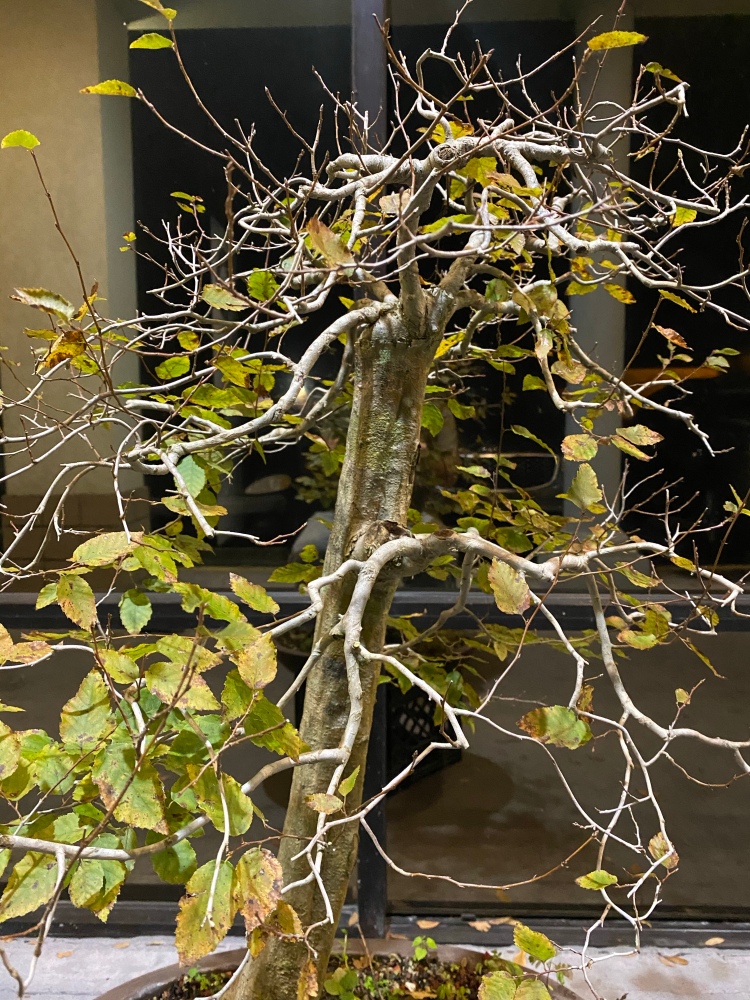 Since it’s me working it, my first step is, of course, removing all the old leaves. Joking aside, generally I don’t remove old leaves here in Orlando in the fall or winter months as just doing that simple thing will kick the tree out of dormancy and, as you may or may not know, a deciduous tree needs it’s winter nap in order for it to grow well in the spring and summer. 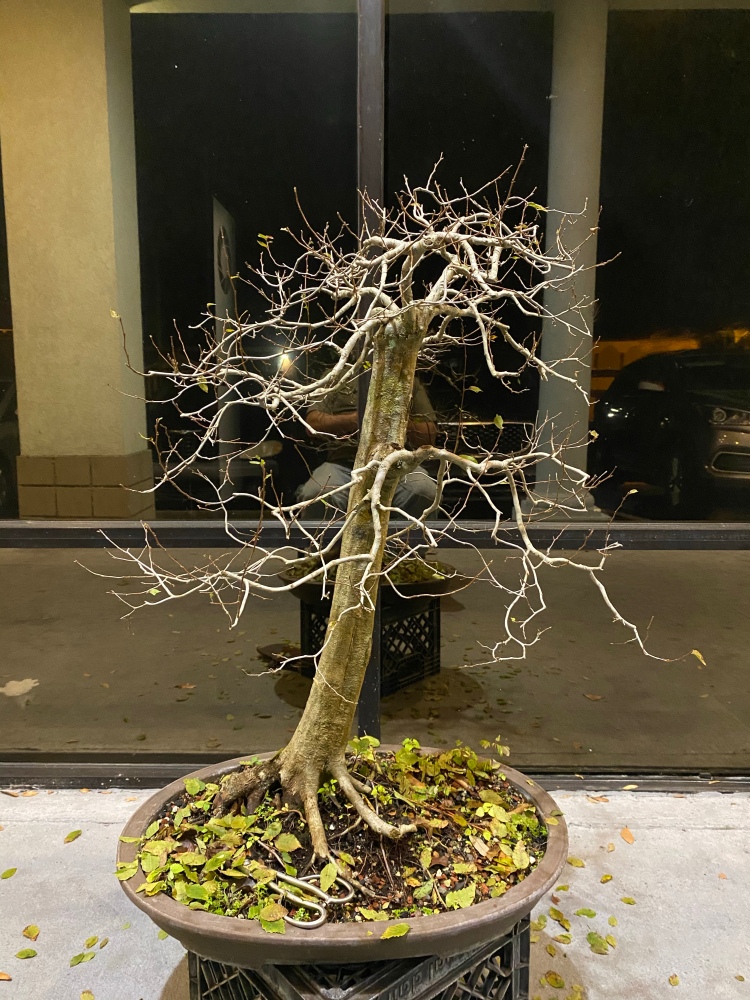 Especially in the warmer climates like here in Orlando. The main cause of death to a deciduous tree is overworking (well, after not watering it I guess). The tree just uses its energy up and dies.

But we can do it now. It’s getting warm. 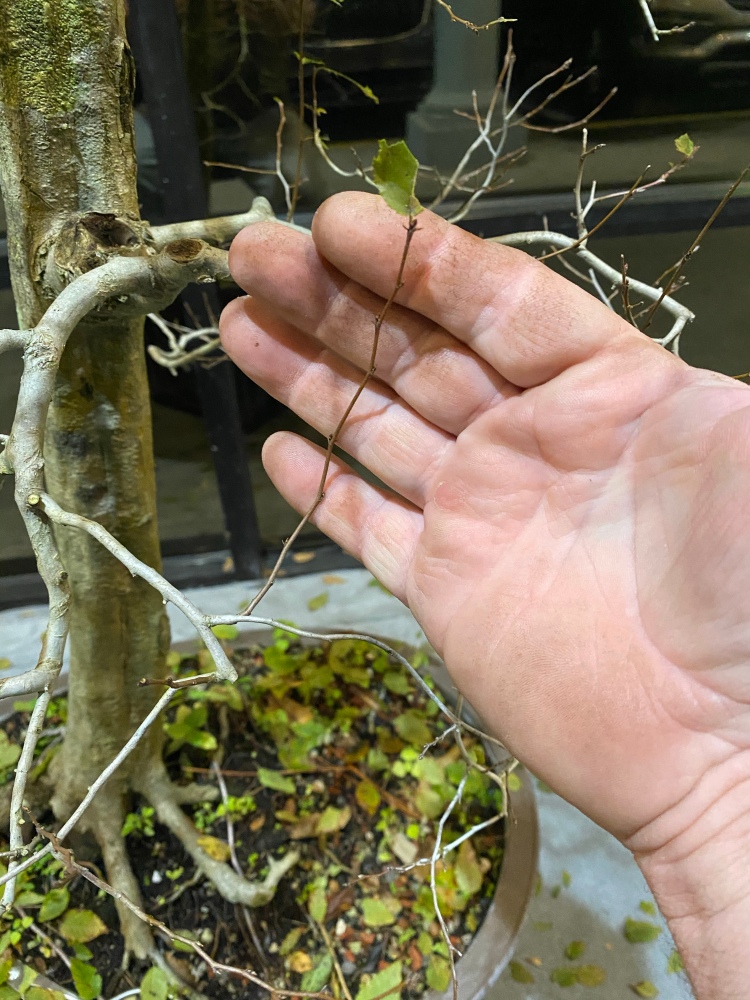 88f just the other day actually (that’s over 31c to the metrically inclined).

The reason I don’t usually prune after the end of September is for the same reason; just so that the tree can get it’s rest. 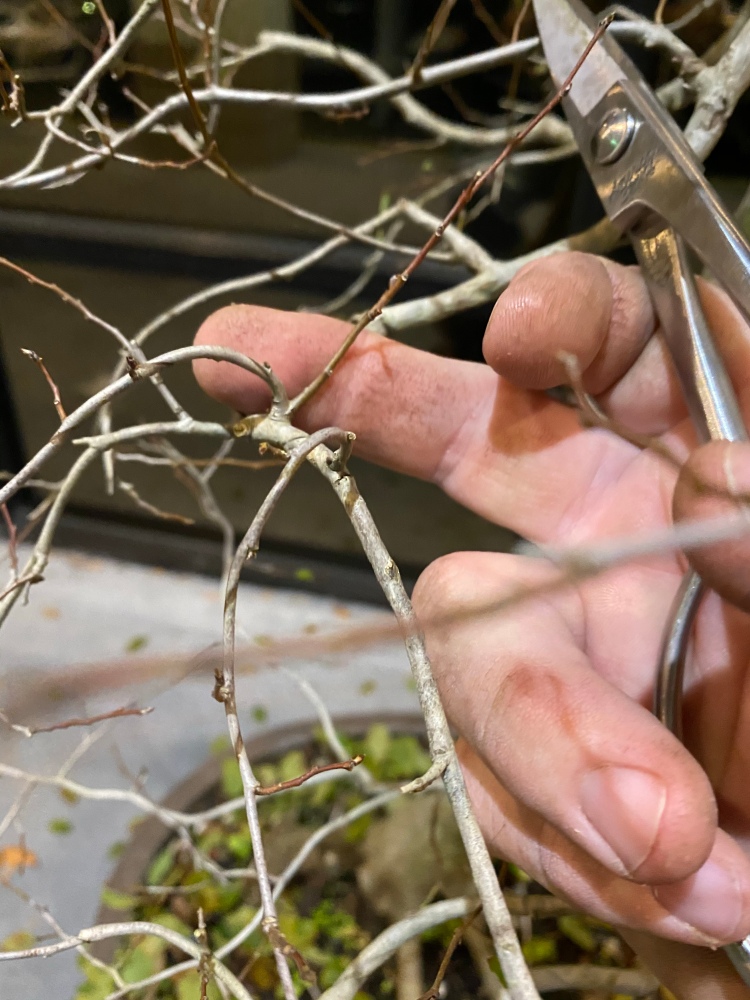 But now I get to work it hard.

I might even do some serious chopping, as tends to be my style, which you know if you’re a constant reader of the blog. 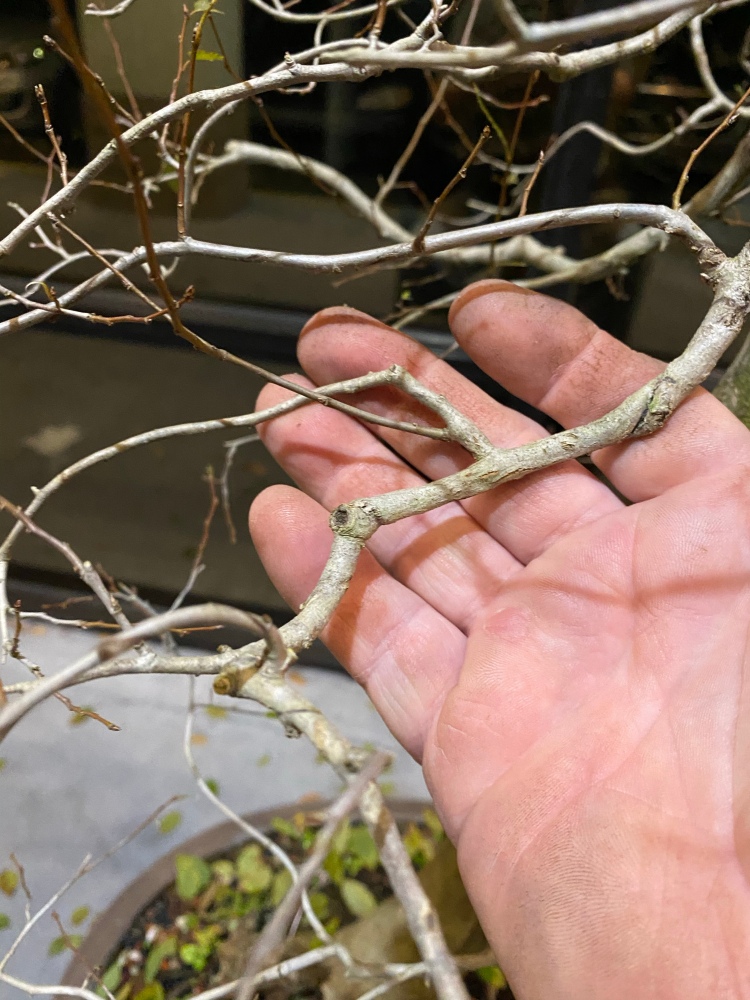 Many people have told me to cut the tree down to the first branch, or even to six inches above the soil line. No, seriously. As though whatever David did to the tree meant nothing and I was just buying a piece of stock.

The strategy tonight is to simplify the structure, removing the ups and down, the tridents and multiple shoots from one point, the crossing or disharmonious branches.

You know, the basics and the next steps.

One could get lost trying to figure out where to start on a large tree (Maybe that’s why so many people are impressed by the big trees? They see the bigness as a real challenge. A smaller tree is harder to develop in truth. There’s less energy in little bonsai, and fewer opportunities to style. A large tree grows like crazy, is almost infinitely plastic, and you can even chop it down to make a small tree..)

You simply start at the basics.

But tonight, my questions are a bit more than “where to start?”

My serious pondering this night is a question of “where do I end it?”

I could remove this one big branch on top here:

Or get rid of even both these branches like this: 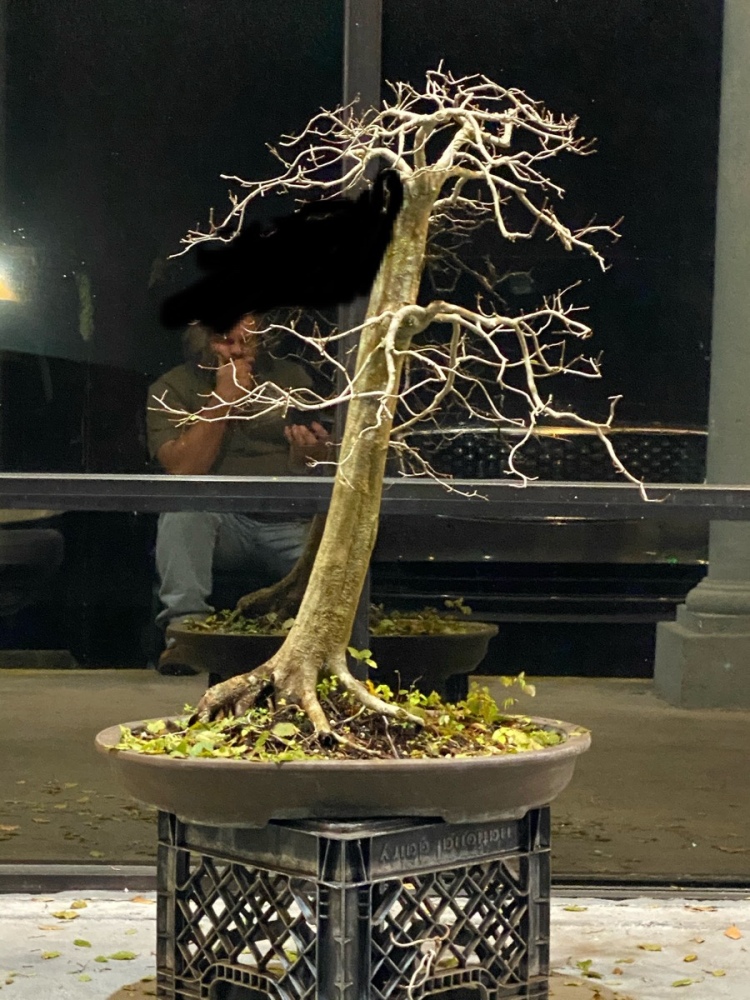 The reason I’m pondering it (getting rid of those two branches) is because there are just too many coming from that top.

Basically I’m going against the basic rules we all learn as beginners. 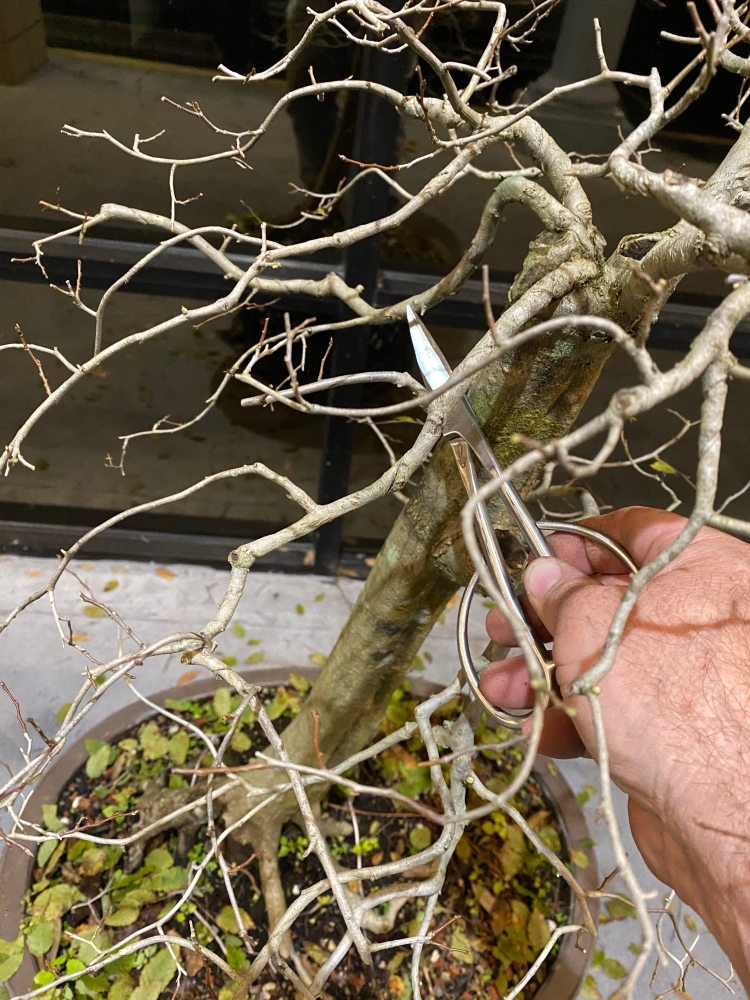 And of course that just can’t be allowed!

I mean, then we’d have anarchy and freedom and cats and dogs sleeping together in the Bonsai World. 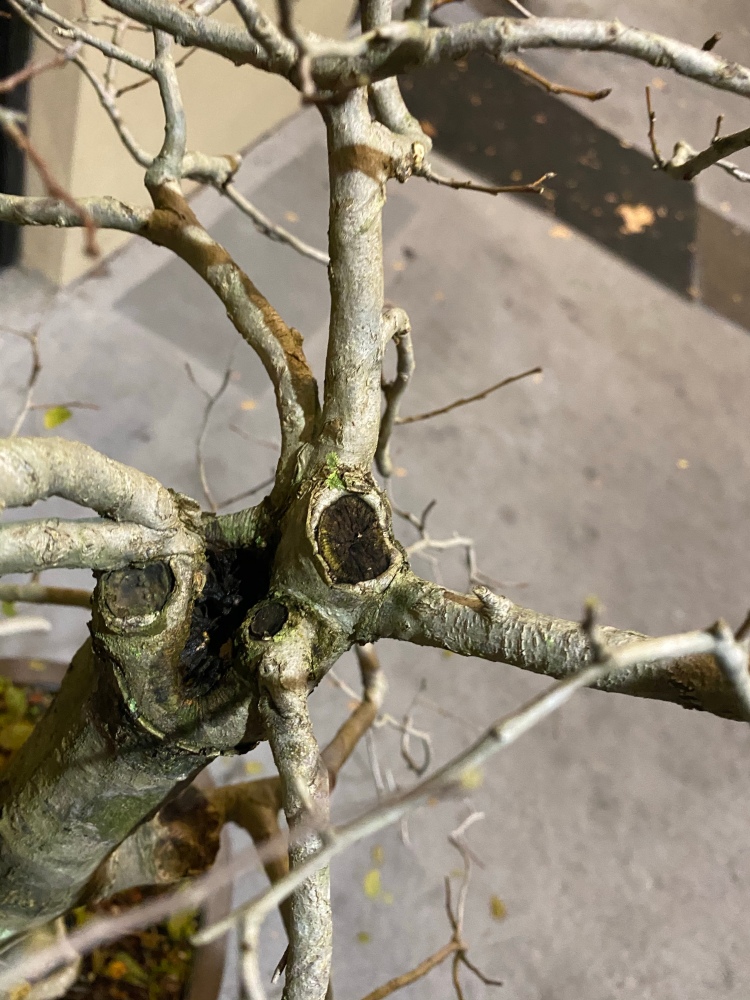 And that just can’t be allowed.

I could go on about INVERSE taper, but that’s a horse that’s been flogged to death, both here and abroad.

And shhhhhhhh, we aren’t talking about the serious lack of taper in the trunk either (old hornbeam kinda have telephone pole like trunks. Wait, what will we change the names of those poles when we’ve all gone mobile? You can’t use power poles because they bury the electric lines in the ground now. How about cable poles? Or broadband poles? First world problem I guess)

The tree, as designed by David, and to my eye as well, was the representation of an old American hornbeam in the Florida forest. David worked for many years as a Forestry Ranger for the Fl. Dept of Agriculture (one of those crazy heroes that run towards the forest fires), so his experiences and vision are spot on for the “naturalistic” school of Bonsai. Not saying he should be pigeonholed there (or I should be for that matter) but often times a tree should look like a, well, simply put, a tree.

In the end, like all shaggy dog stories, I’m not gonna have a big fourth wall shattering, fireworks on New Years, super duper ,and paradigm shifting ending, but just the continuation of the original design.

And the photo is kinda cool too. Just like it is.