I do believe I’ve written about this ficus before….as old Odin one-eye used to say, “..you are not the first to pass this way, nor will you be the last…”

Man, I miss that ride.

Ah…here it is the Ficus Maximus post! And the follow up is here , the Dark Side of The Nook.

I guess it’s been four years since an update, I do apologize. I’ve been a bit busy with my studygroups and traveling. 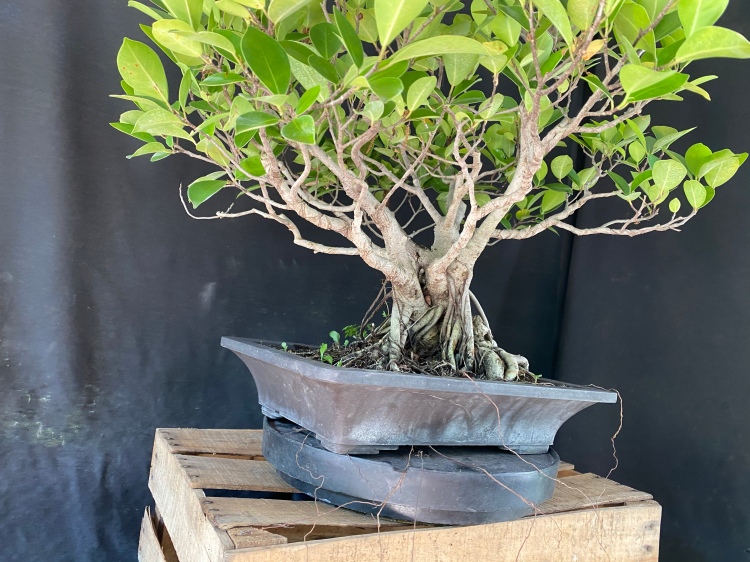 But, since I’m not traveling much at this time in history, I’ve been doing some serious catching up.

So, without further ado, it’s time for a “Ficus Maximus” revisit.

Just a stock plant, probably $25, from Old Florida Bonsai nursery. I’m not sure they’re even selling trees anymore. I truly enjoyed that place. JJ and Richard Turner, husband and wife in bonsai together, were the owners. But Richard’s wife JJ passed away last year and I can’t get in touch with them now. JJ was good people. Misunderstood, yeah, but, aren’t we all?

This is the tree at the end of the blogpost, after the first styling…

It was like “…all the World’s a sunny day” back then. Look at that light! Stay Gold indeed!

And the update, only five months later, in September, 2016.

Today, I’ll be defoliating, pruning, and finally finding a good pot for it. Something nice.

Or nicer. It’s just in a mica pot now.

Defoliation is definitely a technique called for on this tree. First, those are last years leaves. They’re old and damaged. 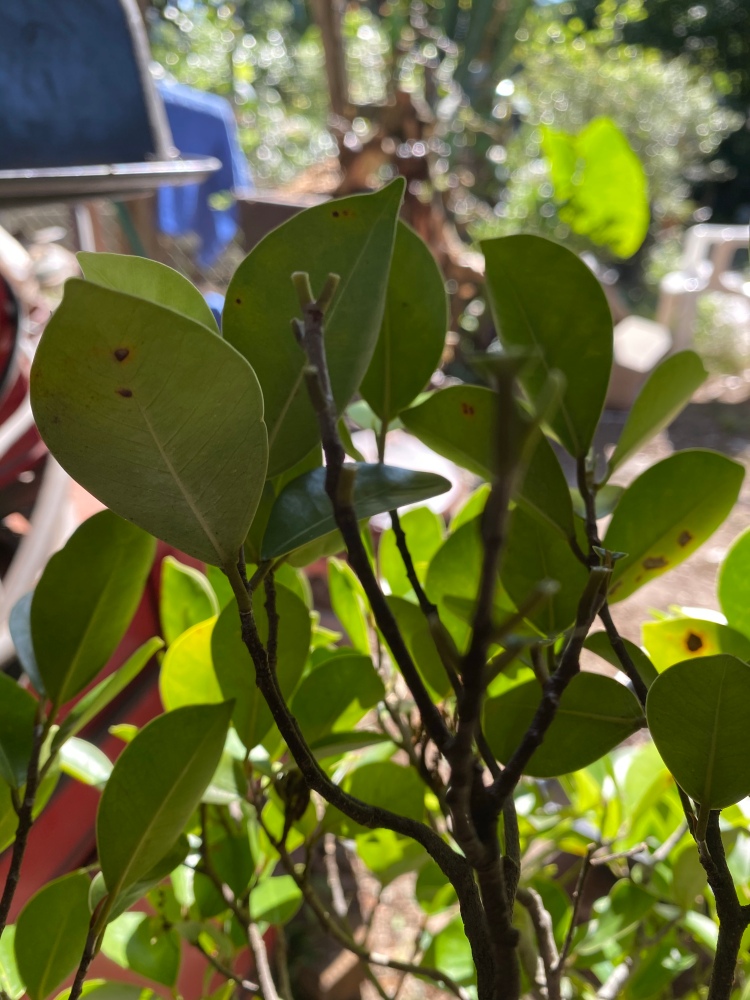 And even though that’s not necessarily a bad thing in general, as I’m getting old and I’m terribly damaged myself, on a tree, that means inefficient photosynthesis.

Second, there’s no better way to spur growth on a ficus microcarpa than to remove all the leaves.

It seems counterintuitive, but it’s true. And I know this not just from experience, but in my readings of scientific studies, trials, horticulture and botany books, blogs, and websites. The chemicals called hormones will make the tree grow new leaves. I wrote a whole treatise…a manifesto if you would, about my habit, so to speak. I hate to repeat myself, though I am terribly soft spoken, but I do often. Click through that link, give it a gander.

Good, back to today’s tree.

That’s the old pot. It has a good shape. Maybe not what I want now, but it worked for the four years. 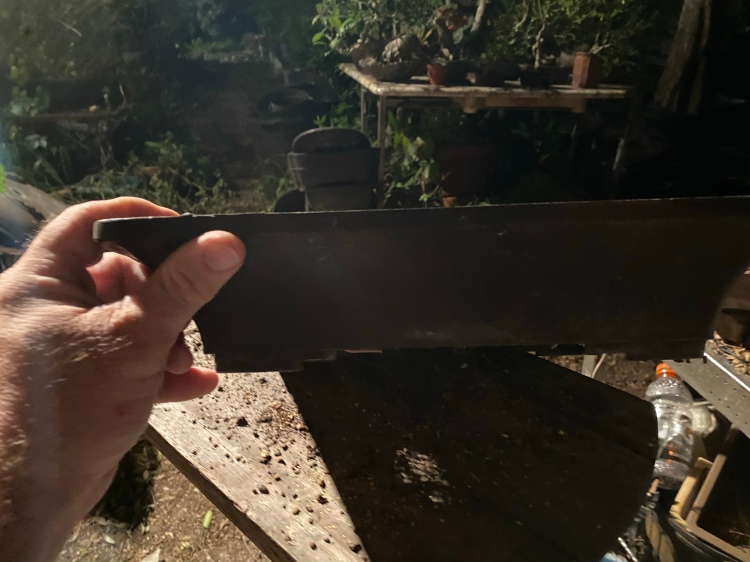 Like I said, made of mica, a good training pot.

But, not needed anymore. It’s time to shine! 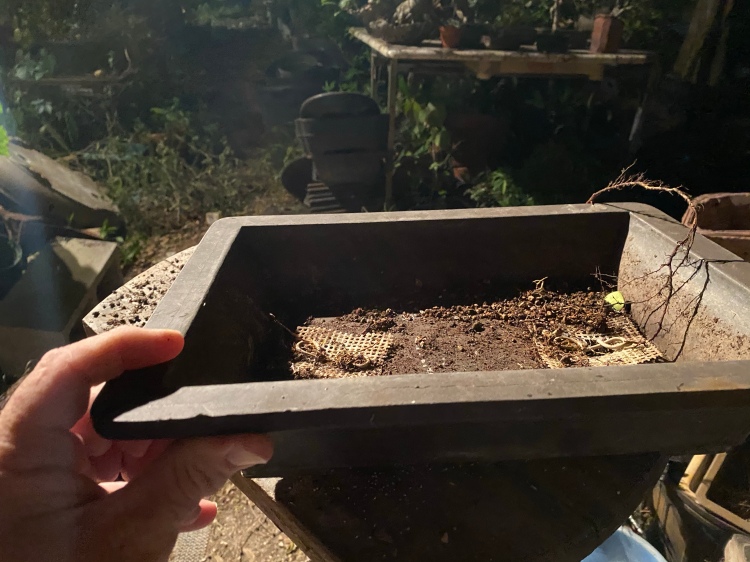 Ah, look at that! Mycorrhizae! That’s always good to see.

I am a big believer in the benefits of microorganisms in the soil. I almost always mix some of the old soil back into the mix when I repot a tree. I also refrain from barerooting and washing the roots.

That conceit will be covered in an omnibus blog post coming soon, but, to give you a hint, look up the word “symbiosis”.

I was thinking to use this pot. It’s not a bad shape. I think it’ll fit. I’ve trained many a tree in it too. It has a presence in The Nook. I think I’ve had it prit near 15 years. Very serviceable.

But I’d like to get try to get this ficus into this new pot I was given by my friend Doug. The original Hippie Dad Bonsai guy. 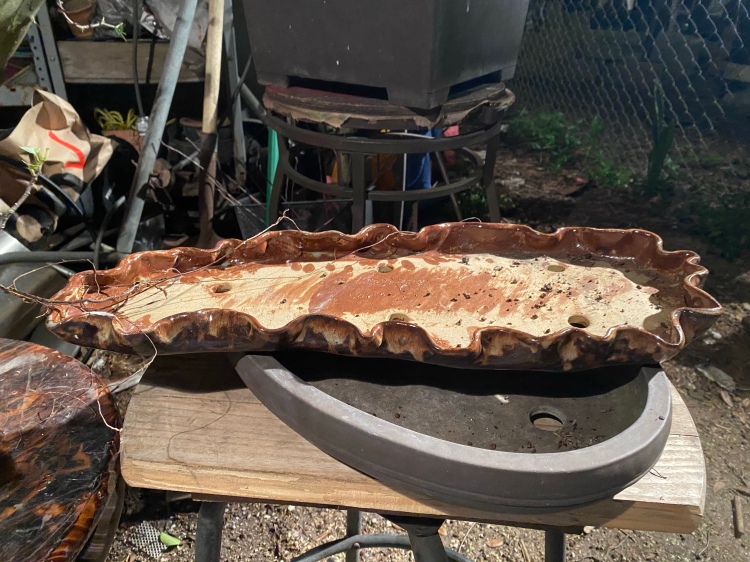 You might say he’s been getting into pots recently.

If you zoom in on the signature, it’s says HDB, the date, and it also says MIKAS, with a backwards K.

HBD is Hippie Dad Bonsai, which is a Facebook group. HBD is a very welcoming group, without much of the drama and hazing some other FB groups have.

Doug is learning about all types of glazes and shapes. He had to in this case, he made this shape because he accidentally broke a similar style container of mine, and felt bad about it. 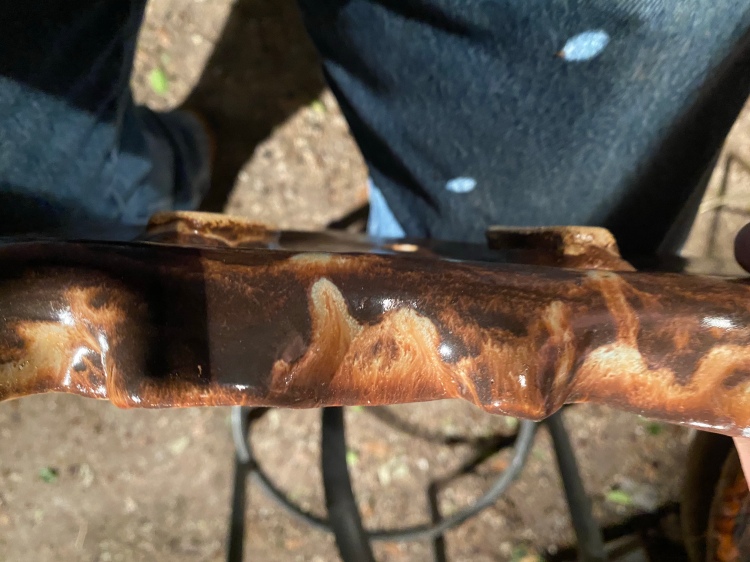 I told him to “..please break some more…” I need to raise level and quality of the pottery I’m using.

Before I rake out the roots….

…..let’s move some of those young aerials.

These are easy to move at this stage, but I’ve moved honkin’ ones. Don’t be afraid, they are ficus and can handle the abuse. 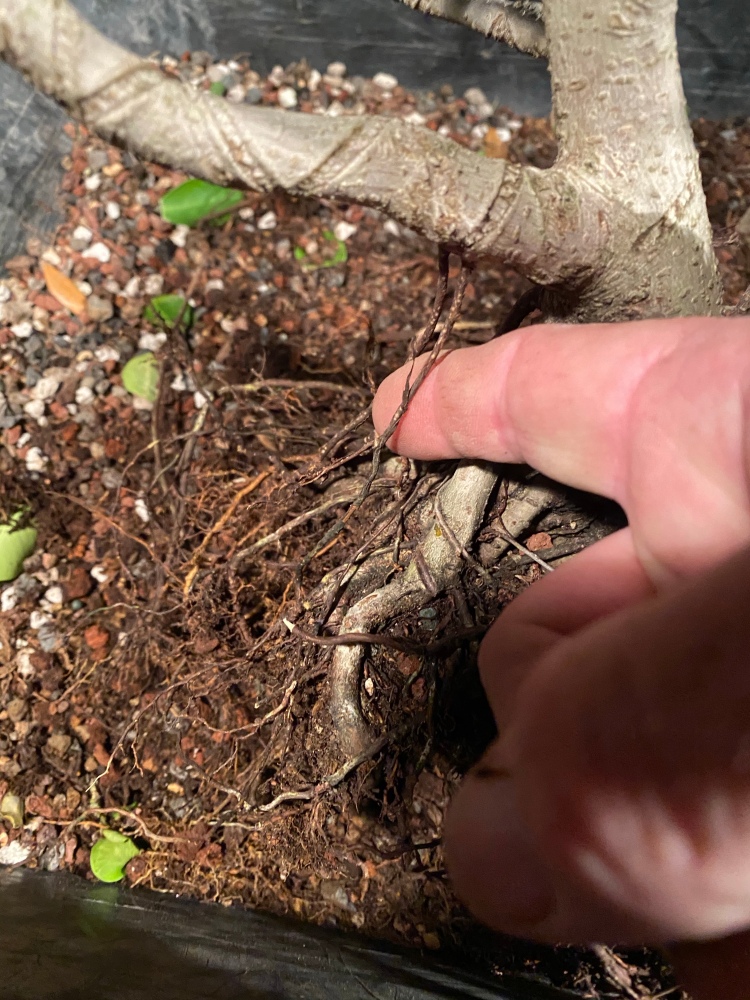 As well, rearrange or remove any crossing roots. A ficus will grow roots everywhere and in every direction naturally, but this is an Art. If I’m outside, plein-aire painting a lake scene with mountains and forests and geese, I will not include those high tension power lines crossing in front of the hills.

We, as artists, are in charge of what we show (to a lesser degree with growing plants, for sure, than with paint and canvas, but we still have some control. That’s what concave cutters are for).

And part of that Art is the container. Bonsai is the mawaige between tree and container, after all. And yes, mawaige is a movie reference. Marriage.

Will the ficus fit? It’ll be tight.

Really tight, front to back. 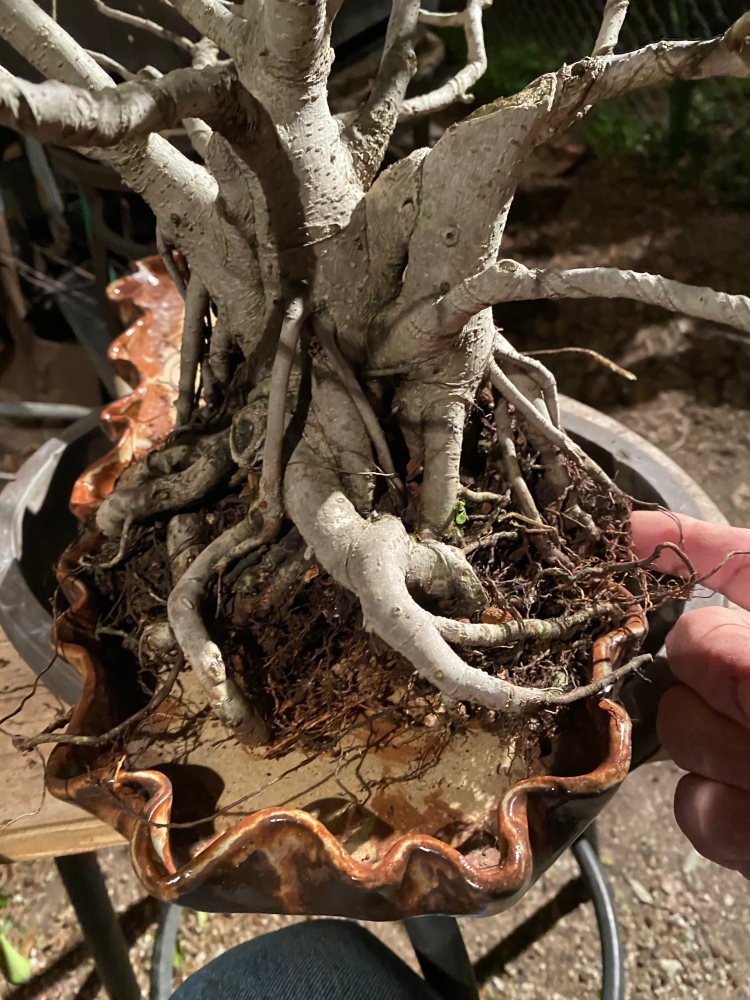 I need a shoehorn….

But I think it’ll work.

It has room to grow sideways.

It definitely fits in the old oval.

The lesson here is, always, if you can, give yourself options when repotting a tree.

Drain hole screens, tie down wires, and, since we saw some significant mycorrhizae , I threw a handful of old soil on the bottom.

The next step, mound up the new mix, so when you plant the trees bottom into the pot, the air spaces get filled up. 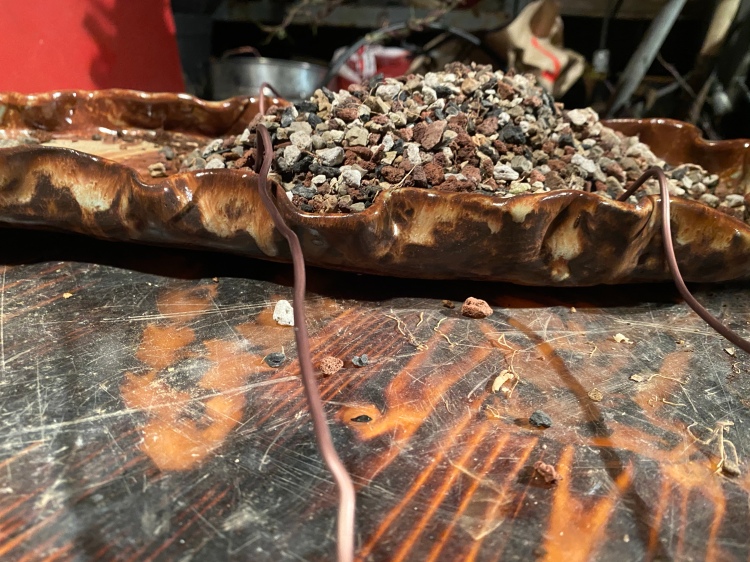 Trim any long roots, remove any weeds or stems…. 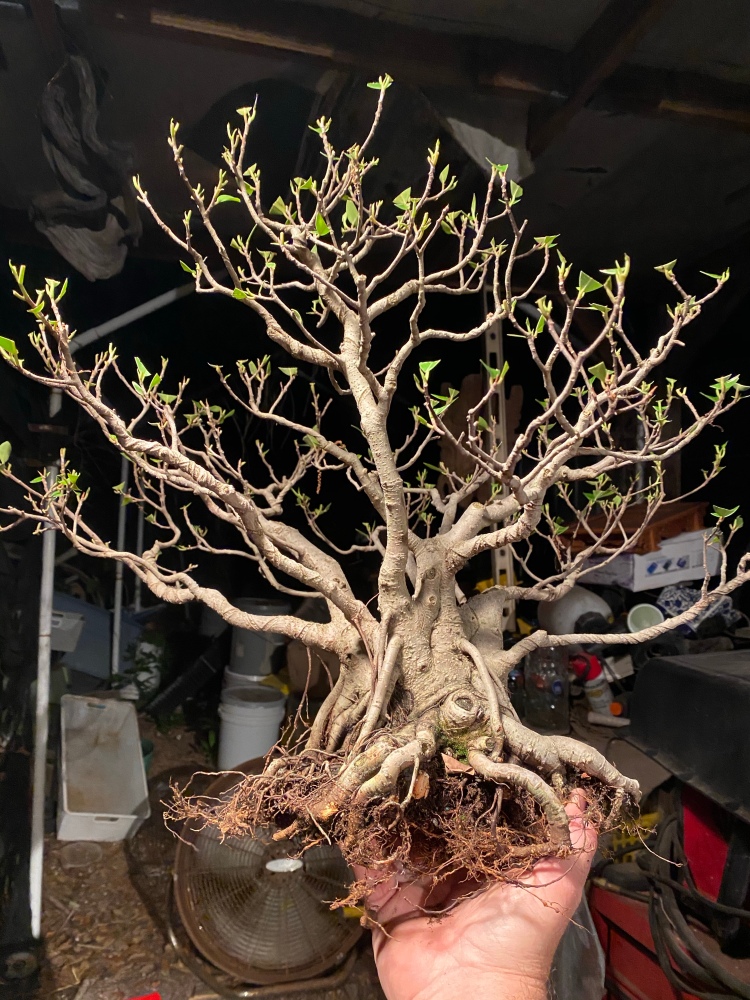 ….and wiggle the tree down onto that soil mound. 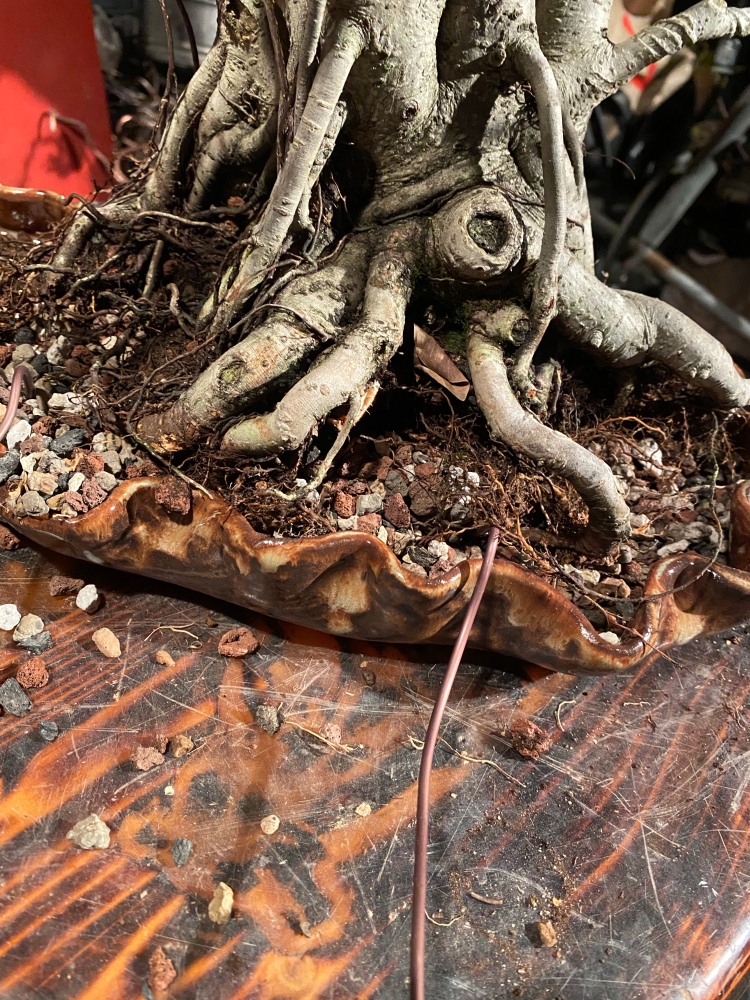 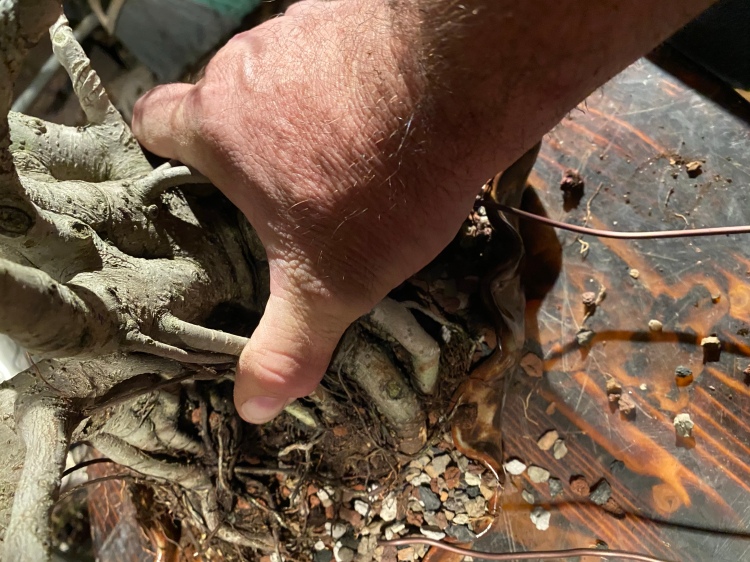 With such a tight fit, I took a lot longer, and was more meticulous, using my chopstick to make sure I filled in all the empty spaces I could.

At this point in the tree’s development, I’m using an organic fertilizer (in this case, UltraFeed from American Bonsai Tools). We want slow, healthy growth. Synthetic, high nitrogen at this time will make the tree go crazy, losing taper and proportion.

It’s time to refine and age it gracefully. We don’t need Jager Bombs and Everclear, now is the time for old Scotch and sipping brandy.

And, with a few snips and cuts….

…and, surprisingly, for me, no wire… 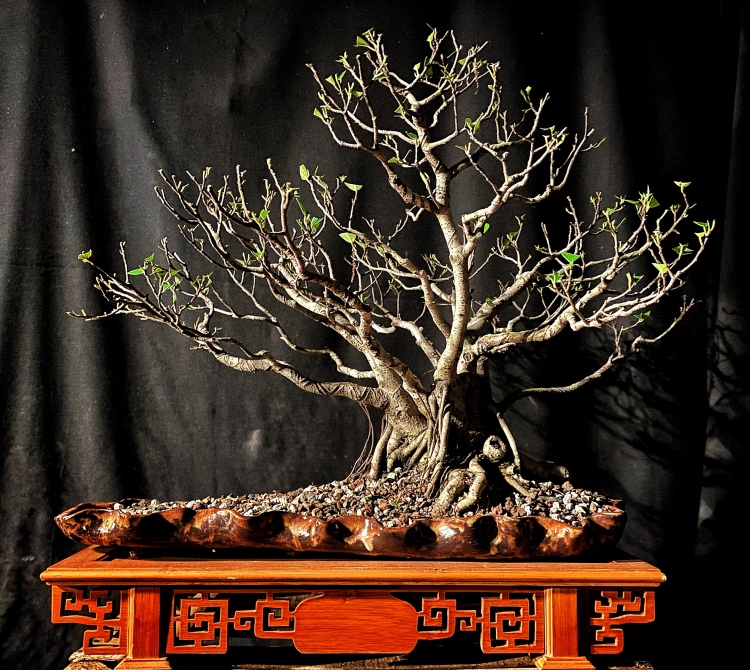 As I am want to say,