That’s a funny word, “provenance”, isn’t it? It’s pronounced by rolling the “r” : pro-vah-nonce, being French, though many say “prah-van-ents”, like some back country, hillbilly art collector. They give it a bit of snobbery when they say it too, nose up in the air, heavy lidded eyes, and waving their hand around like they’re shooing a horsefly.

“This here mid-century dining room table has “prah-van-ents”, once belonging to the founder of the local Rotary club, one of the first in the Nation, in Lexington, Kentucky. Do notice the horse motif and the distressed Louis the 16th style legs due to the owner stretching out his feet, clad in riding boots.”

The word means that a particular object has history.

To honor Tom, the Bonsai Societies of Florida renamed their Legacy Award after him. Here’s an excerpt from an article I wrote for the January, 2020 edition of The Florida Bonsai Magazine about the award:

“Tom was instrumental in Florida Bonsai, his main focus being education. His short booklet “Introduction to Bonsai: A Course Syllabus” published in 1991, is still available in print and is used extensively as one of the best beginners guides for bonsai classes in the USA.

The founder of the Kawa Bonsai Society and Bsf President from 1993-1995, Tom also was the guiding hand in the Epcot/Bsf partnership for inclusion of bonsai in the inaugural Epcot International Flower and Garden Festival, back in 1994, a partnership which has grown from the original 16 trees loaned in the first year to today’s 21.

Many of the current influential Florida bonsai artists got their start either directly, or from Tom’s educational materials, and the bonsai community and Bsf, would not be where it is if it weren’t for his teachings and guidance.”

I had attended the Kawa Bonsai Society’s auction a few month’s ago and I was blown away when this willow leaf ficus with the age and quality it has came up. Trees like this just don’t come to auction hardly at all, so I jumped on it. 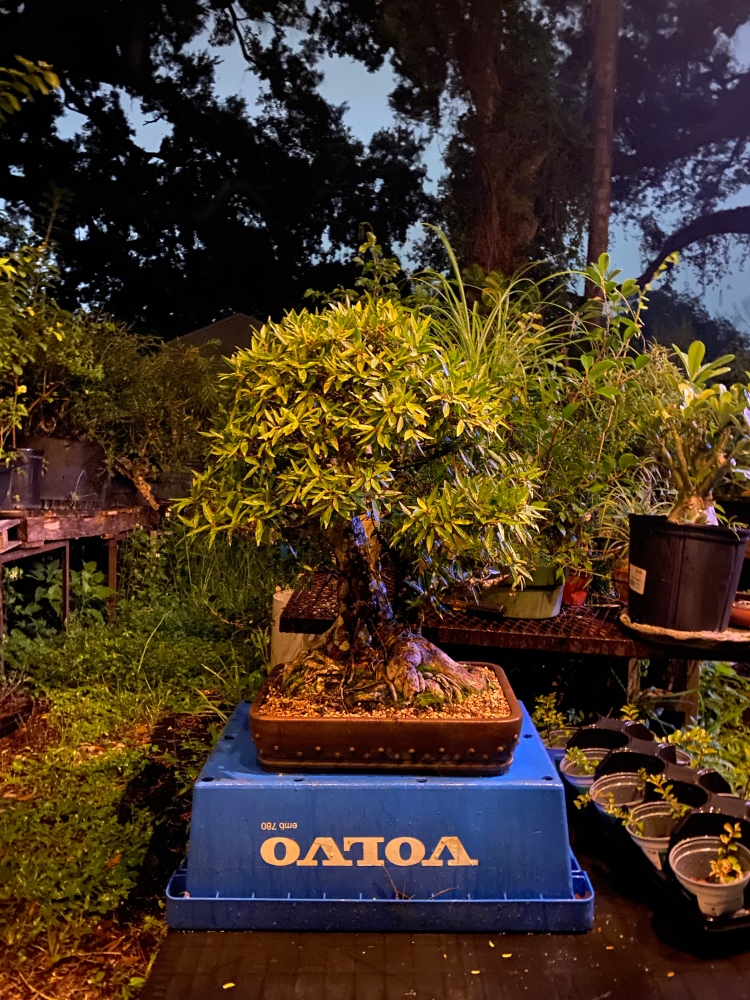 There was some competition, one bidder being Ben Agresta from Agresta Gardens, who likes to buy trees with provenance, so I was a little worried.

But I won, amazingly (maybe he thought I was just trying to run up the bid?).

This is the tree about a week after coming into my nursery. What do we notice?

I see this question all the time,

“I just got this tree a week ago and it was all lush and green when I bought it, now I’m getting yellow leaves and I’m afraid it’s dying, what did I do?!?!”

Fear not, my novice bonsai enthusiasts, whenever a tree is moved from one light intensity to another, especially tropicals (and ficus in particular), the tree will drop the older leaves, mostly the oldest but sometimes, yes, even every single one, and regrow new ones. It takes less energy to replace an old leaf, which is adapted to the light in its previous home, than it is to try to change them to the current conditions. 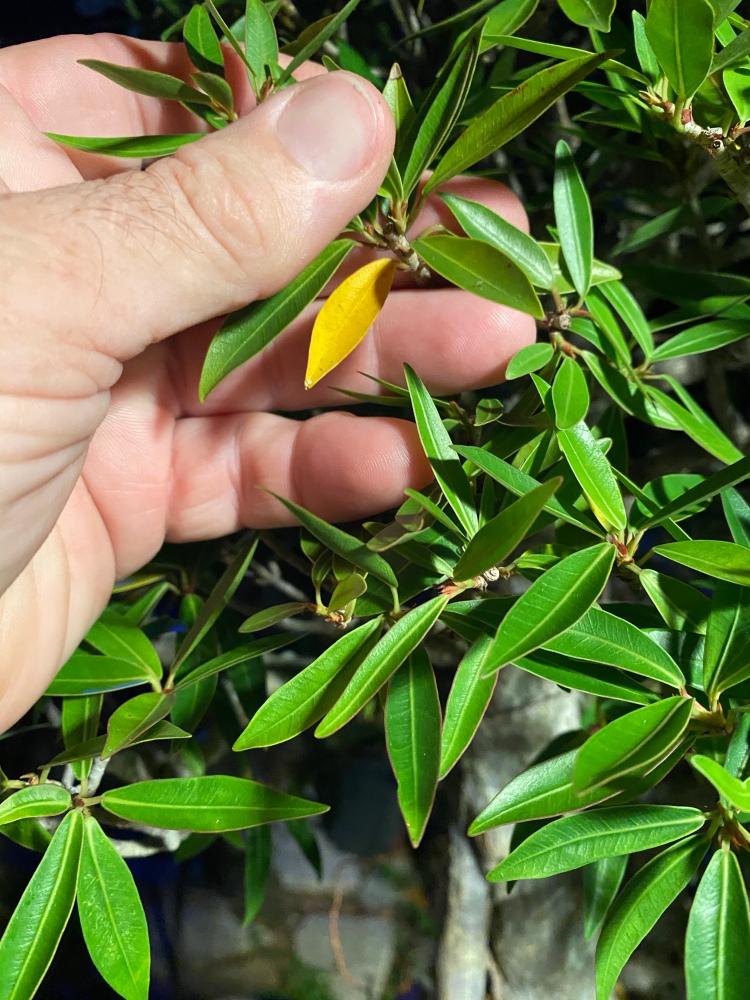 My recommendation when moving a tree and the light changes are drastic (like when the poor northerners have to bring their tropicals indoors for the winter and put them back outside for the spring) is to go ahead and defoliate the tree. You’ll get quicker bounce back and gain development time for the growing season. The one thing we can’t fake in Bonsai is time. We can fake age, but it takes time to grow. Imagine getting one more growth spurt a year.

Below we have the main pruning work ahead of us. This should be mantra now, prune each branch so that only two branches are coming from each fork. 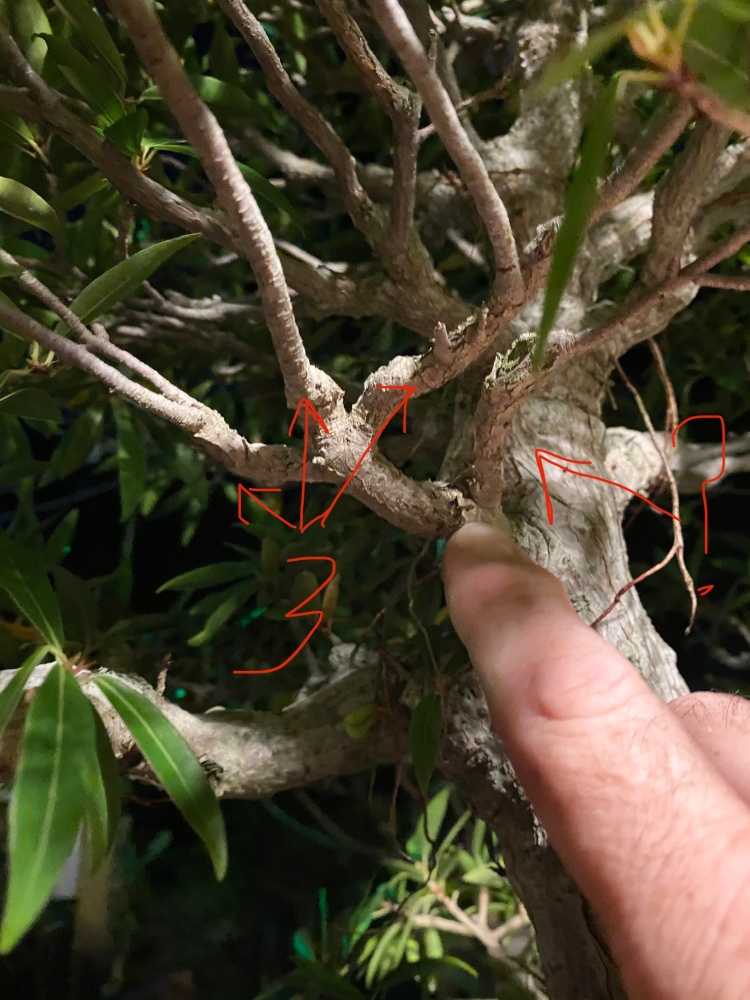 Here’s the nebari, or root spread. It needs clean up in the short term and some real serious work next spring.

Here’s the result of the short term work. 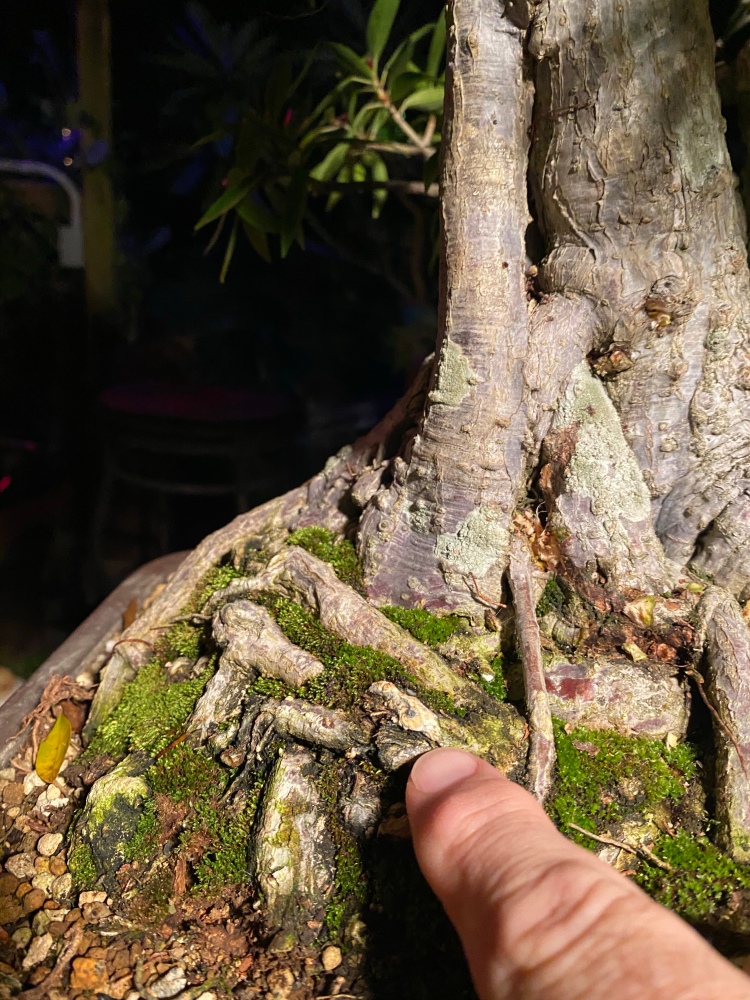 ….and split some of the larger ones with no taper. 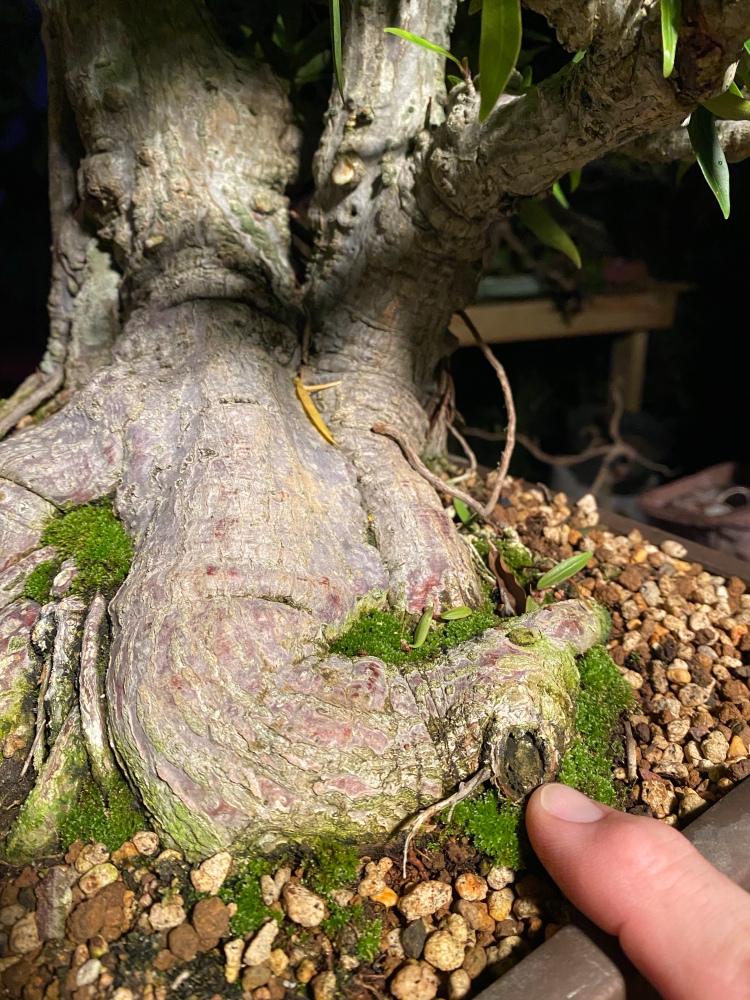 But that’s for the spring, when I repot it. I’ve learned that, here in Orlando, I do the willow leaf repots, especially when the root work is heavy, in early spring, when the weather is slowly getting warm but the wet season hasn’t started yet (the old adage, “April showers bring May flowers” just doesn’t hold true in Orlando. We are lucky if it rains by Memorial Day). I’ve had bad results repotting the willow leaf in the rainy season, with root rot and even death. And we don’t want this tree to die.

Most of the branches are about where they need to be except this first one.

It almost seems like the branch broke off, by the big orange scar below.

I’ll have to grow it out.

Now for the usual task before work, defoliation.

Funny thing is, I’ll post pictures of fully defoliated ficus trees at this time (late fall in Orlando Florida) and I’ll get questions about whether now is a good time to defoliate. 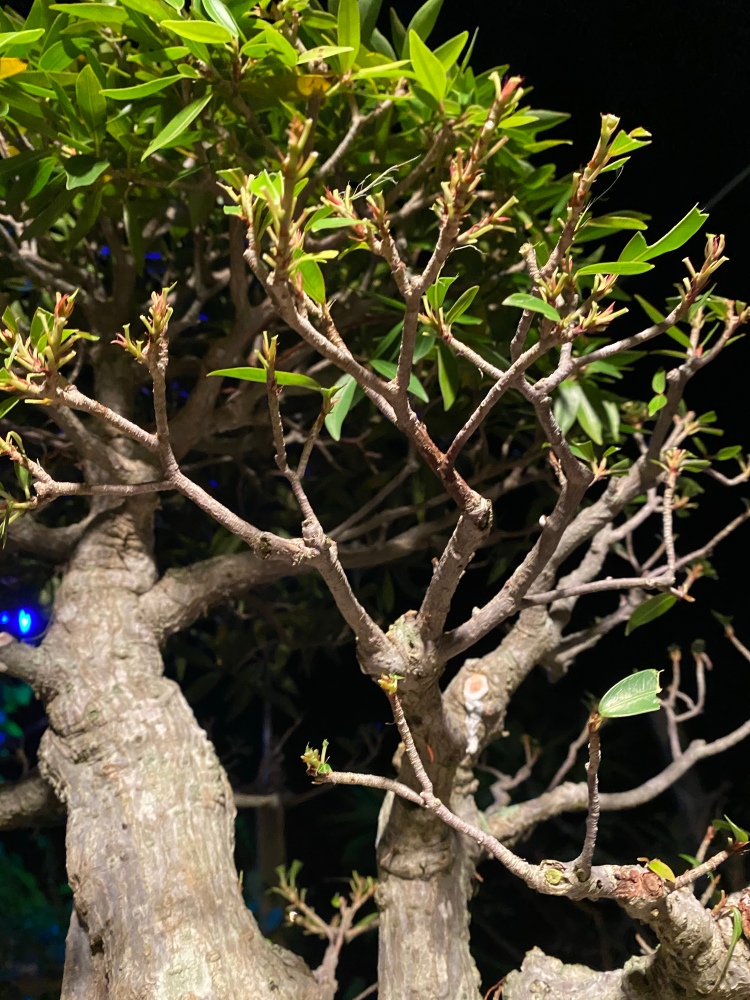 It takes a lot to keep my natural smart ass tendencies from floating up so I end up saying:

“Now is a great time, down here in Florida, as it’s what Jim Smith (the grandfather of tropical bonsai) calls ‘second spring’. And up North, it’s a good time to defoliate too, as the light changes when you bring it in for winter will cause defoliation anyway

Be brave, don’t be afraid, keep the work going.

Which is what I’m doing now. Above, don’t need this branch.

Below…… remember the pic from earlier with the numbered diagram and question mark? Here’s the payoff. 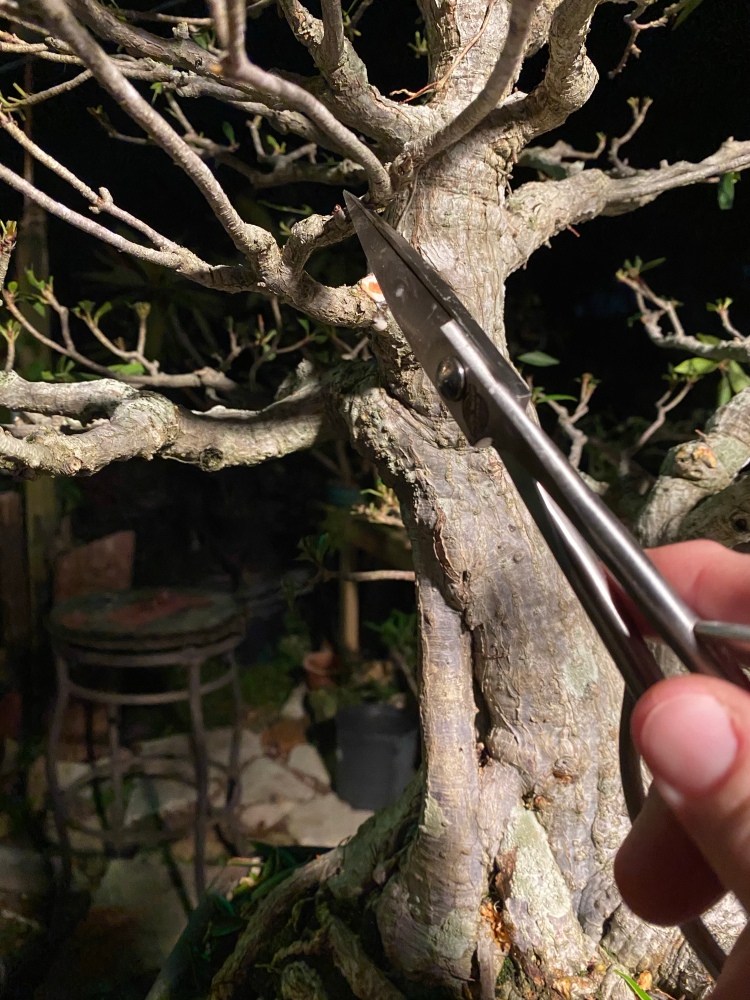 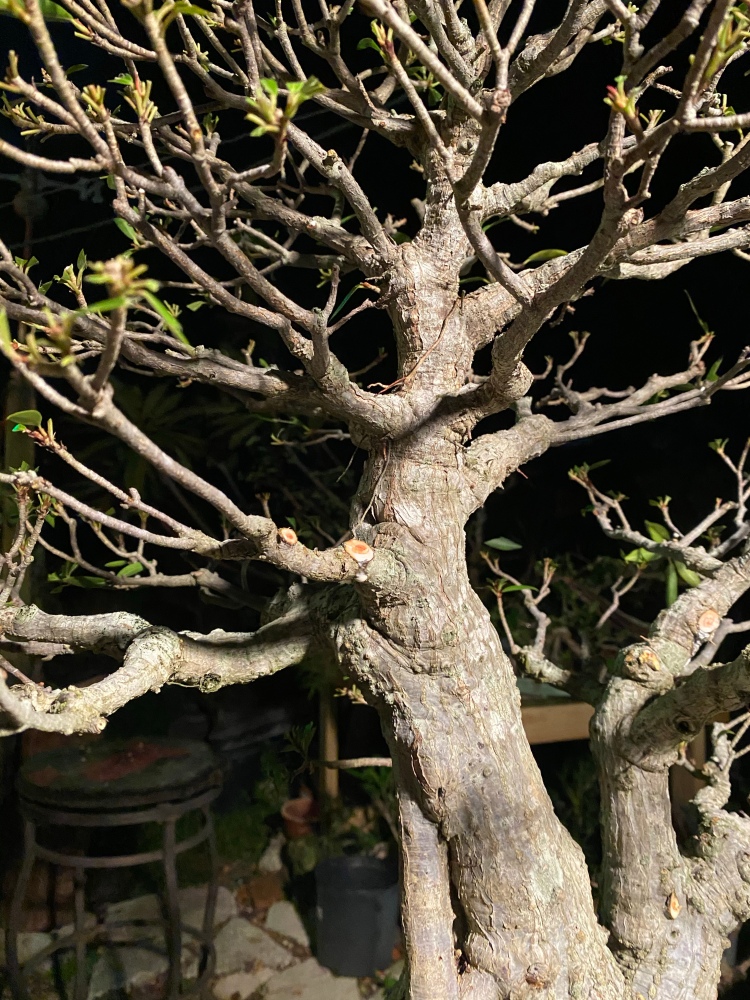 On the top of the tree, below, I’ll have a few decisions to make.

You might be saying to yourself, “This crazy MF isn’t gonna cut all that ramification off, is he?”

It’s kinda funky and tangled like a politicians financial report right now. We need some definition. 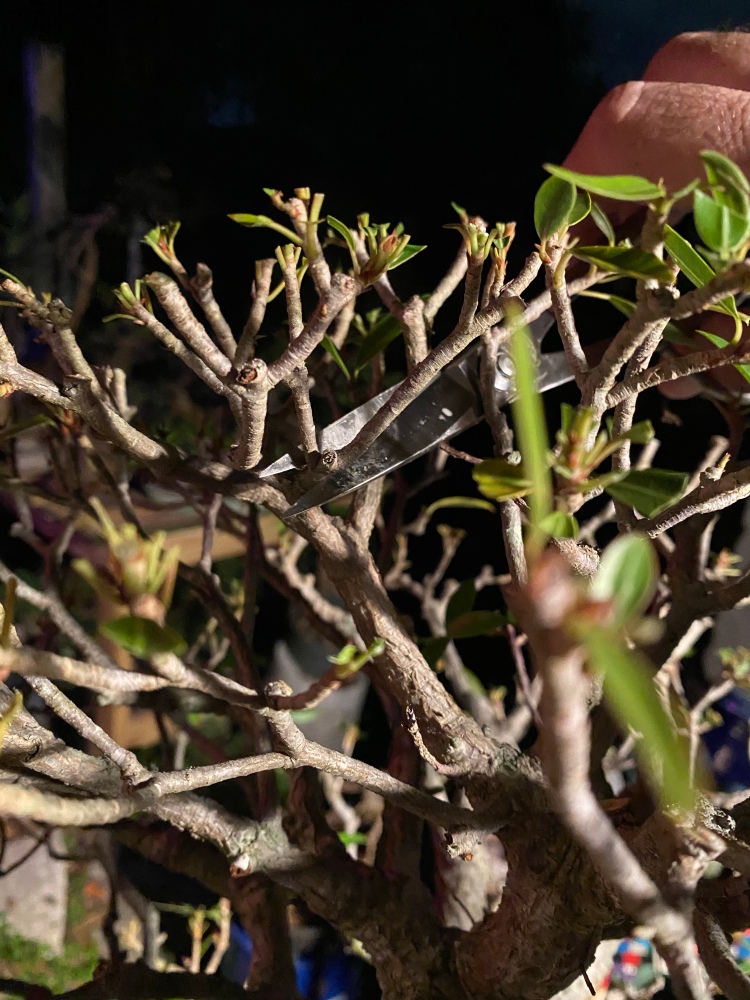 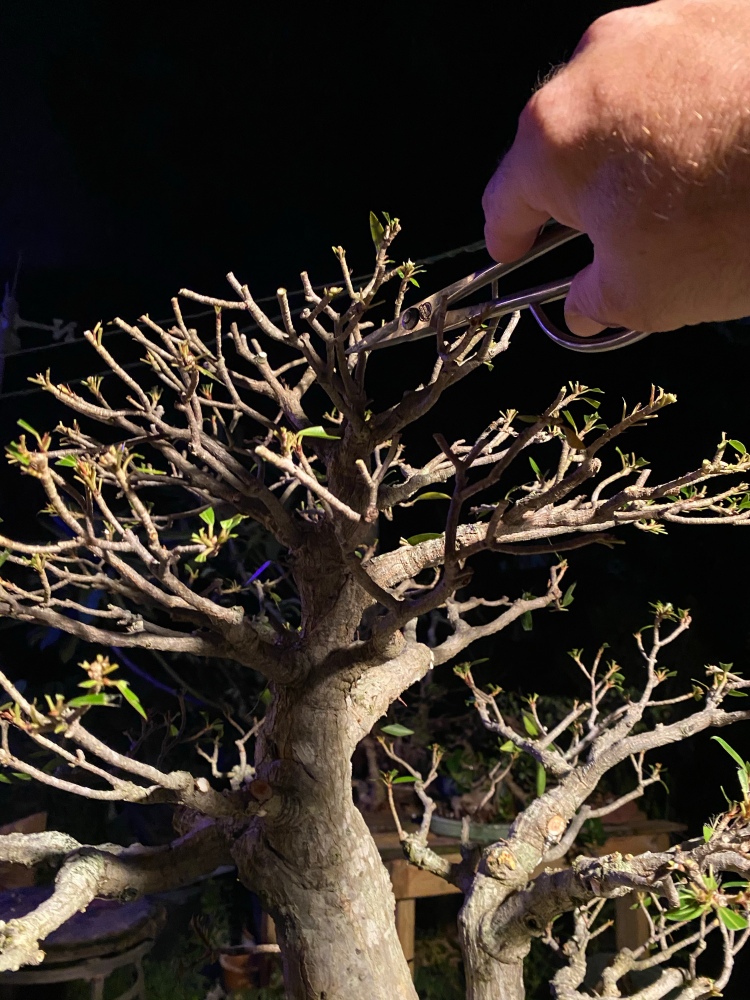 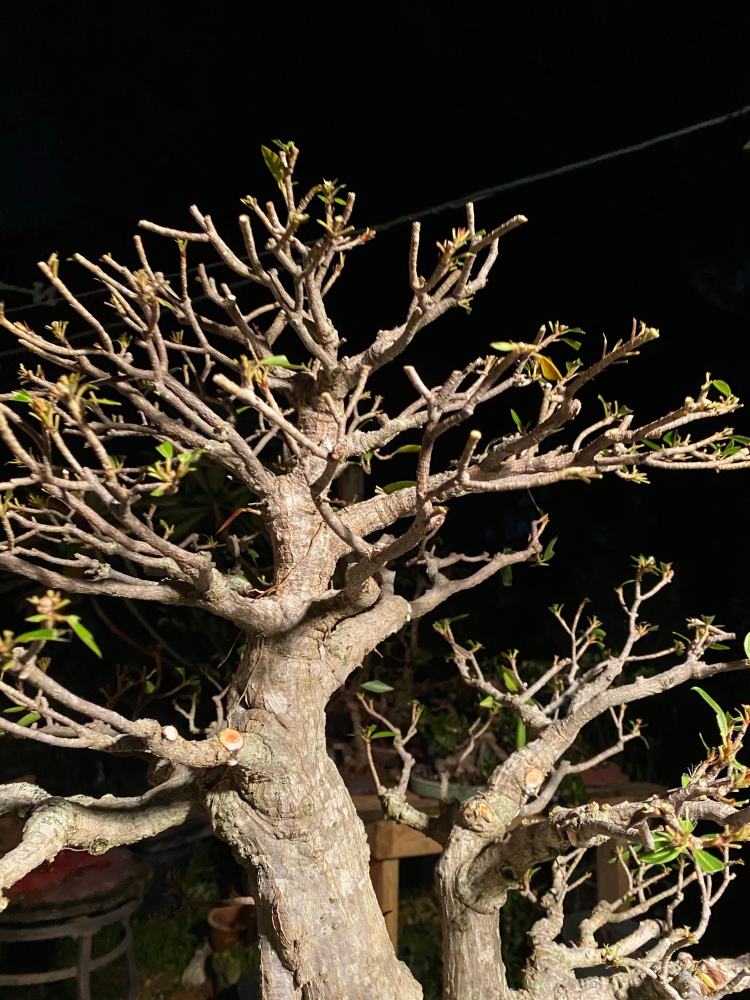 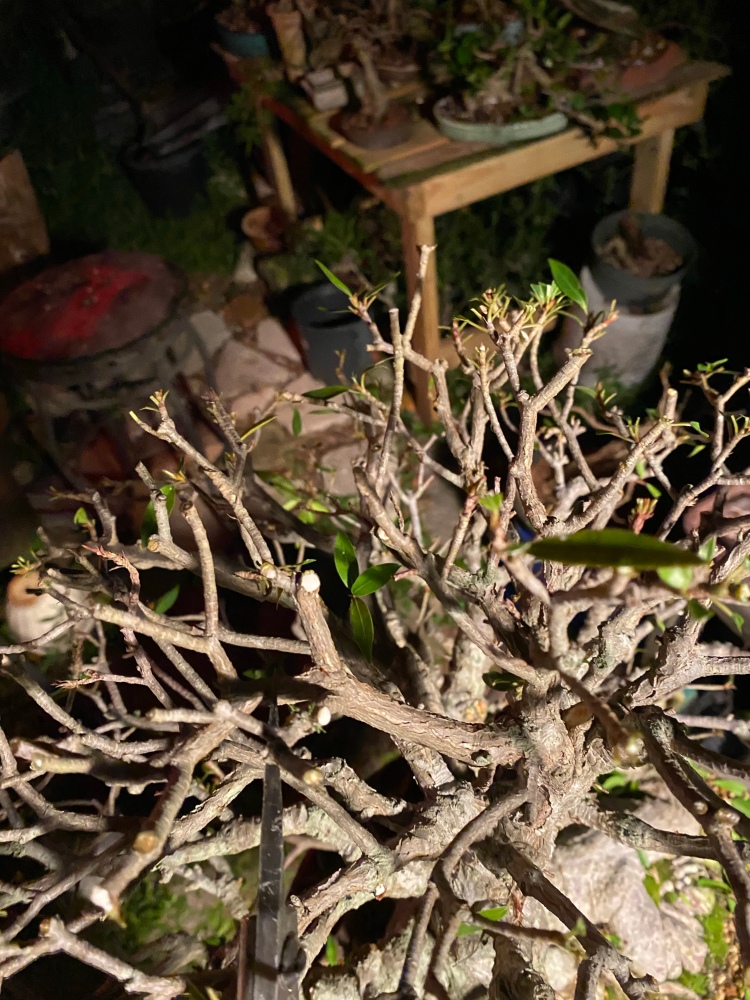 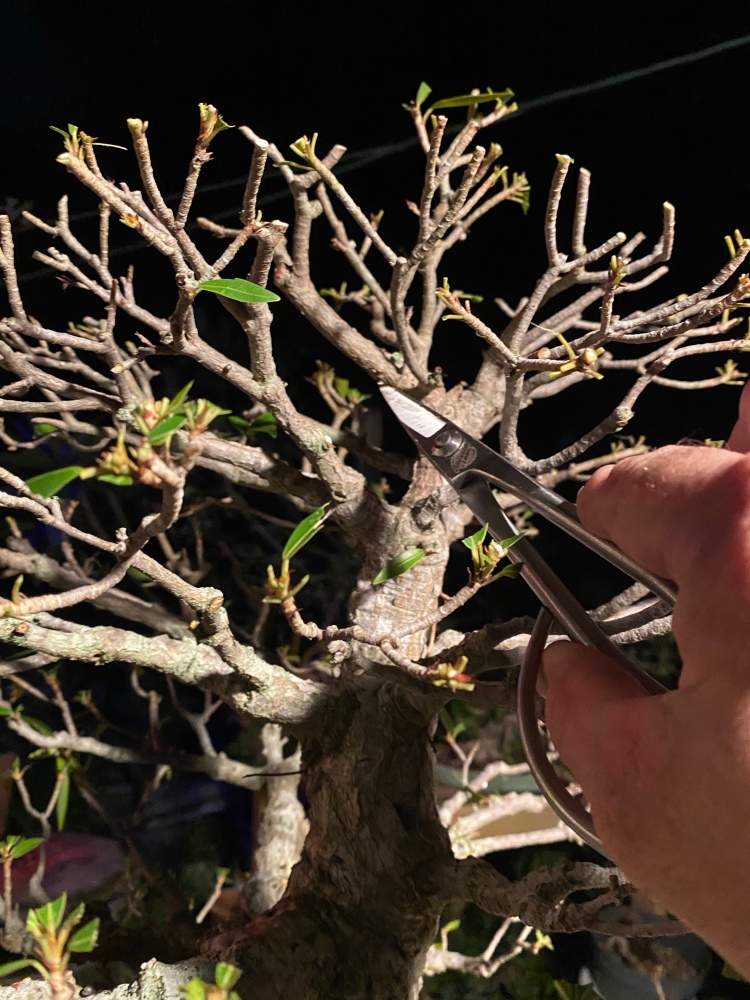 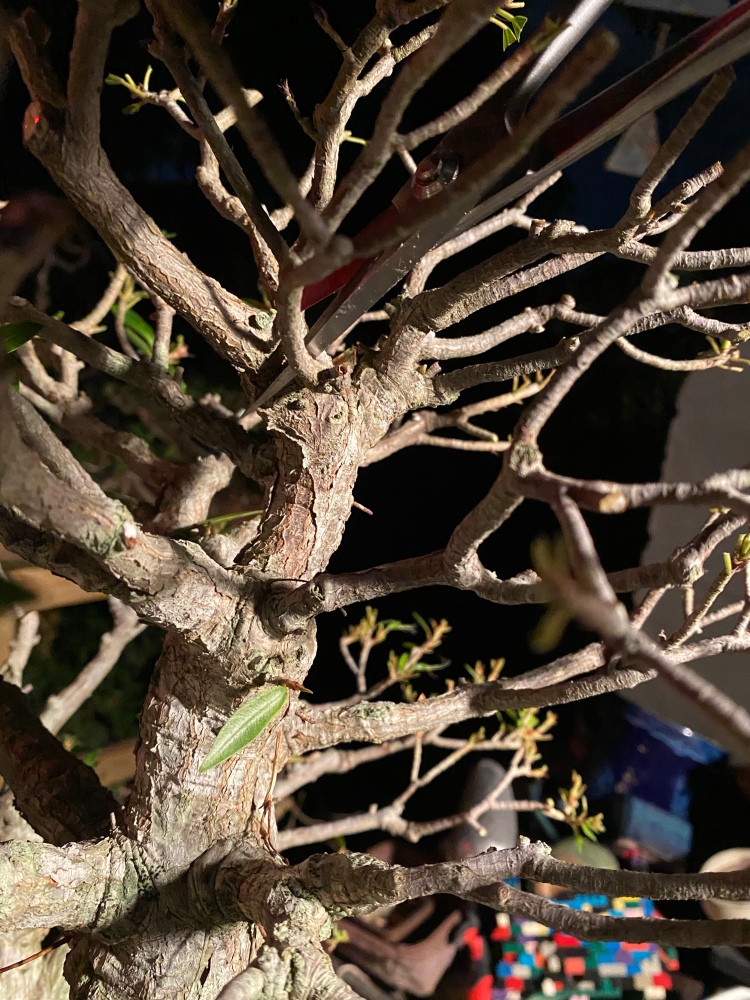 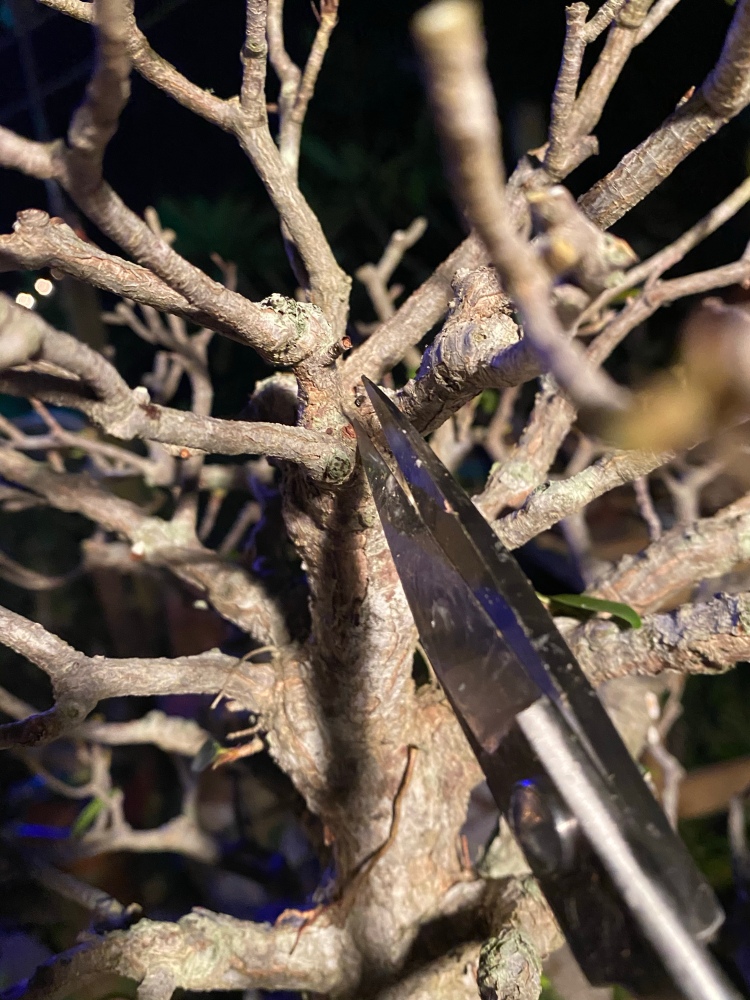 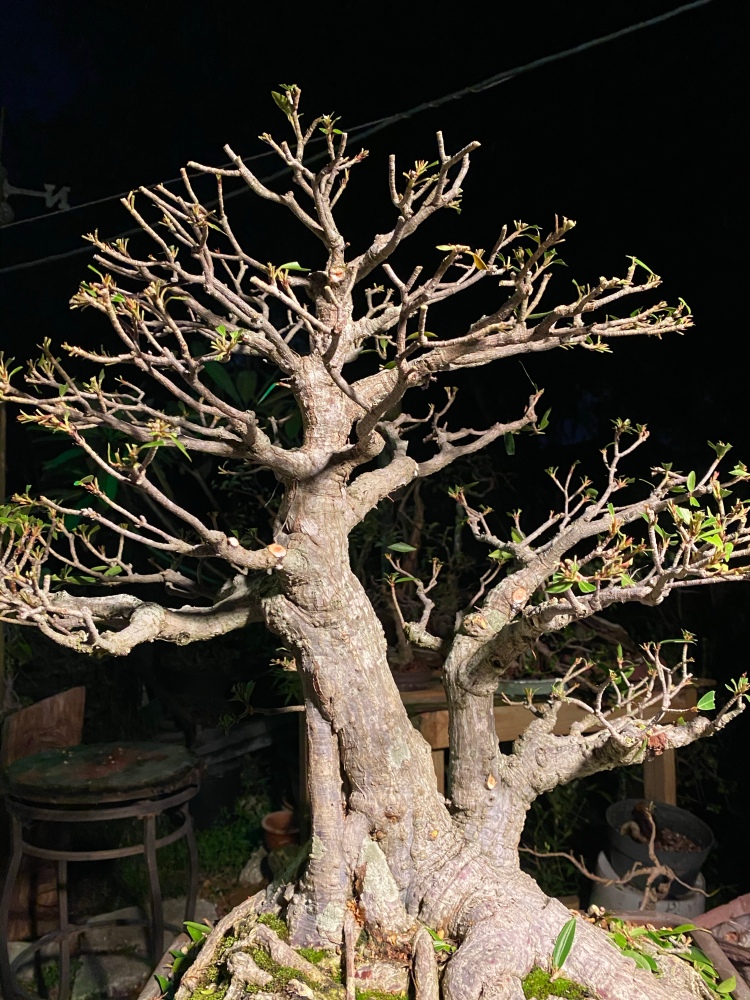 You want ramification, but you want it to build up and be on the ends of the branches, not all coming from the same places on the trunk.

A few more branch choices to make, in the pic below, that big branch I’m pointing to is kinda straight and it’s a bit large, being so high up in the tree (the concept is that the higher up in the tree, the smaller the branch thickness should be. It’s logical, they are technically younger branches so they should be thinner, and it helps with the forced perspective of making a short, small tree look like a large, tall tree)

I’ll wait on removing it for now.

And below, do I keep this? 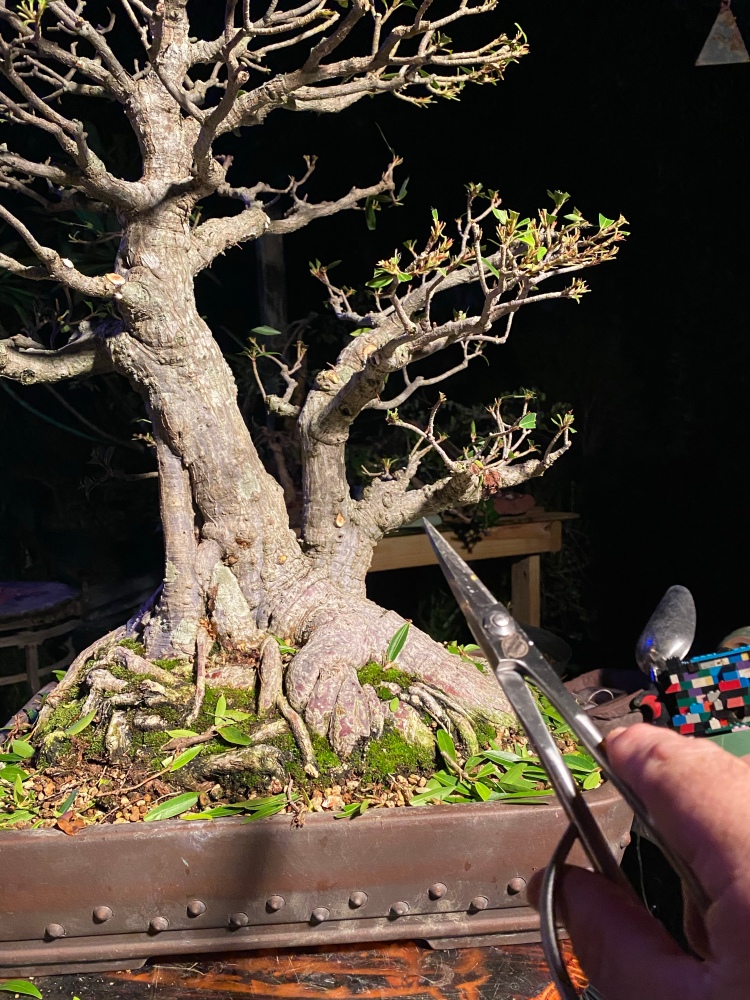 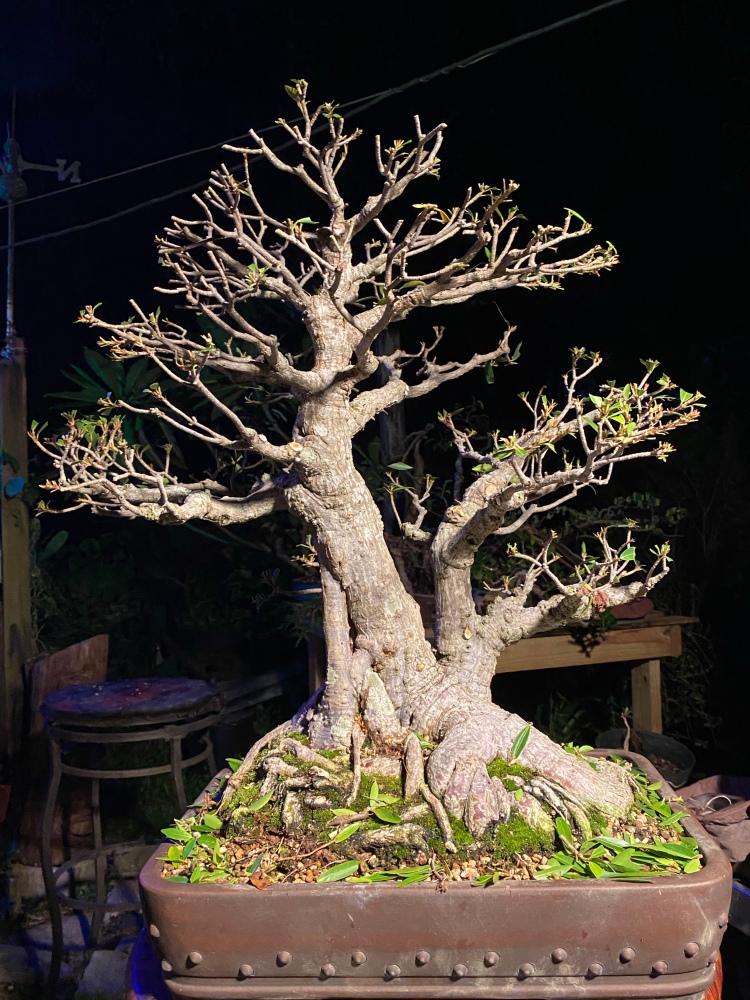 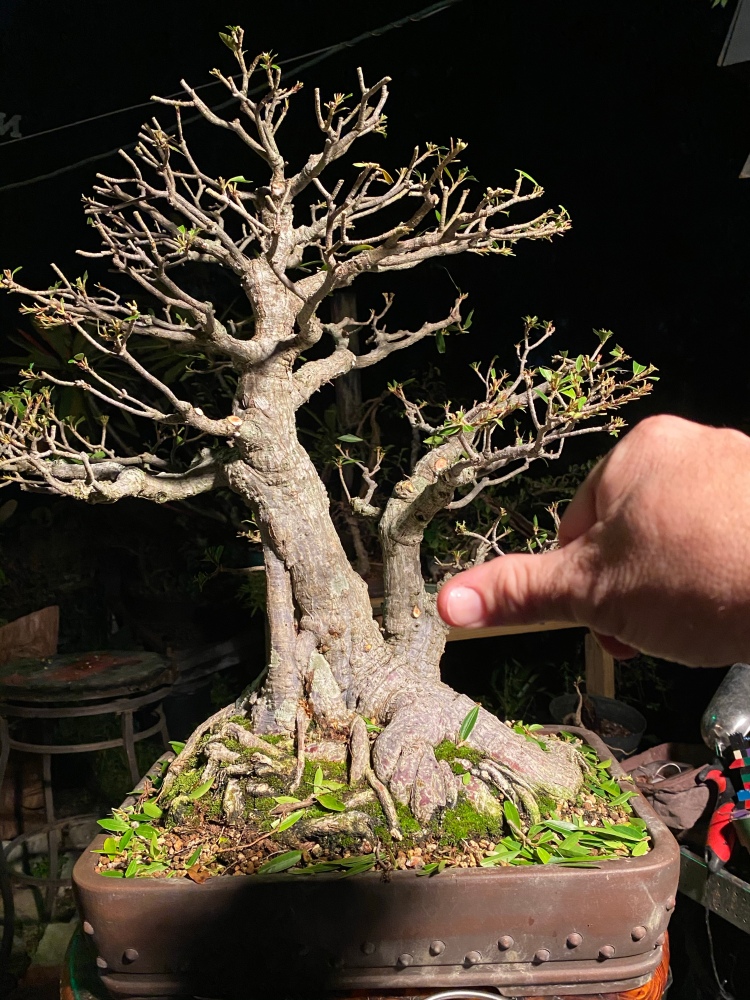 It’s tempting to chop it off, isn’t it? 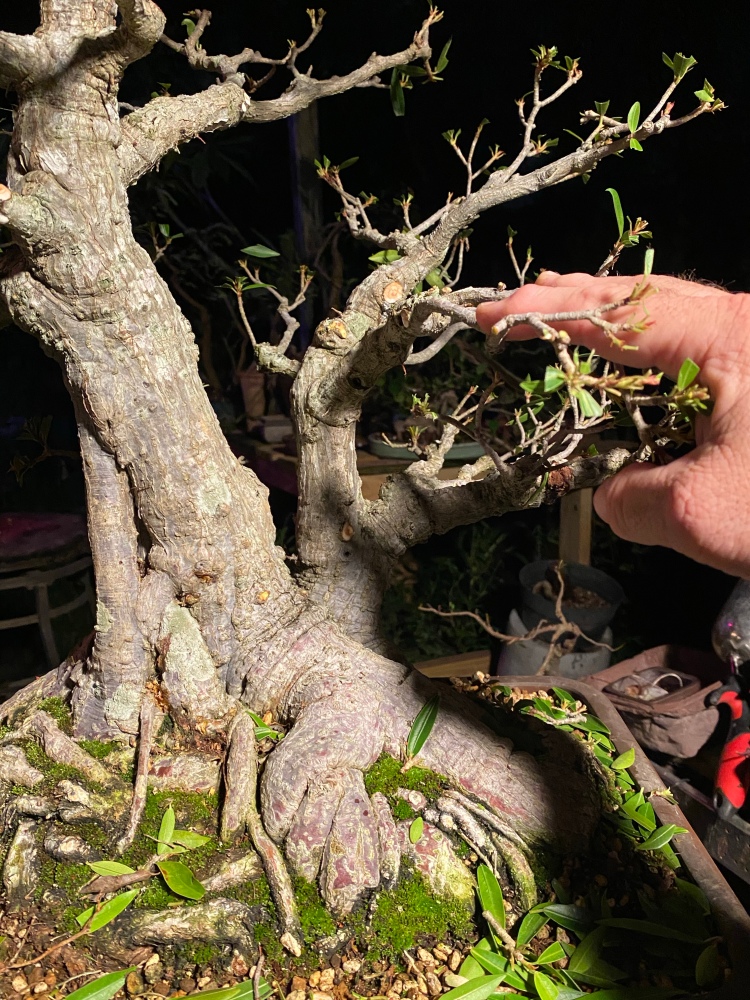 I think I’ll keep it for now too….

The tree has several fronts.

Rotated to the left…..

Like I said, I’m not repotting now, so it’s not too big of a dilemma right now.

Right now it’s time for bed. See you in the morning….

The best cure for a fuzzy head in the morning is to get to work wiring a tree.

Let’s get to it then. 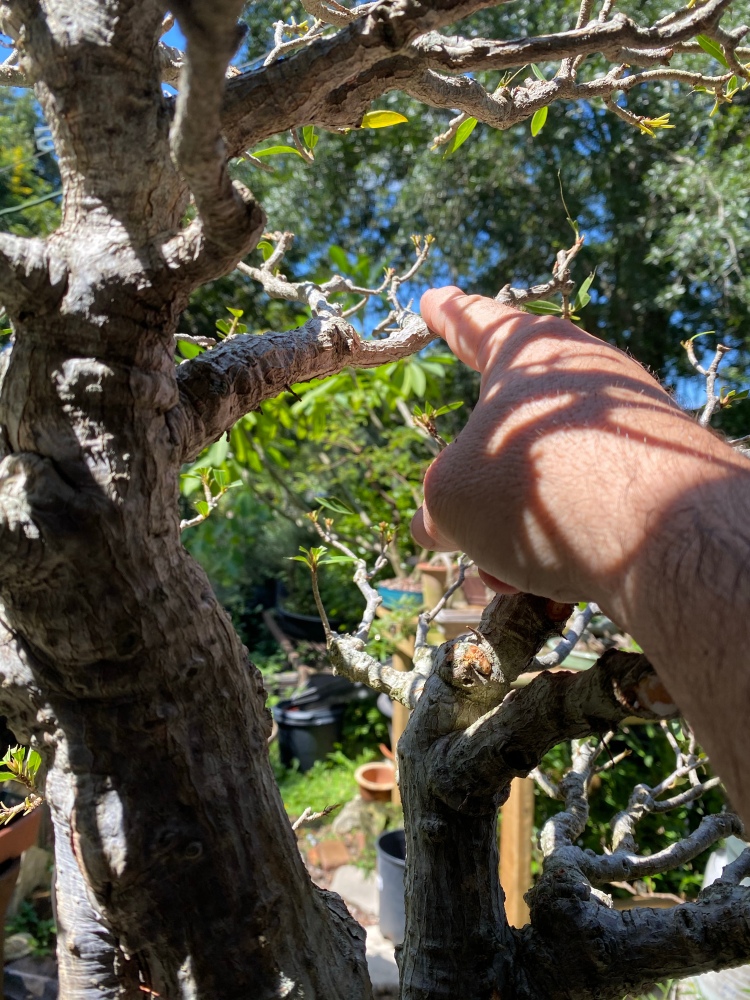 Most of the branches I need to move are, thankfully, movable.

Which is why ficus are better for bonsai than most every other tree in the trade.

I know, i know, I can hear you, stop playing with your wood and start wiring already. 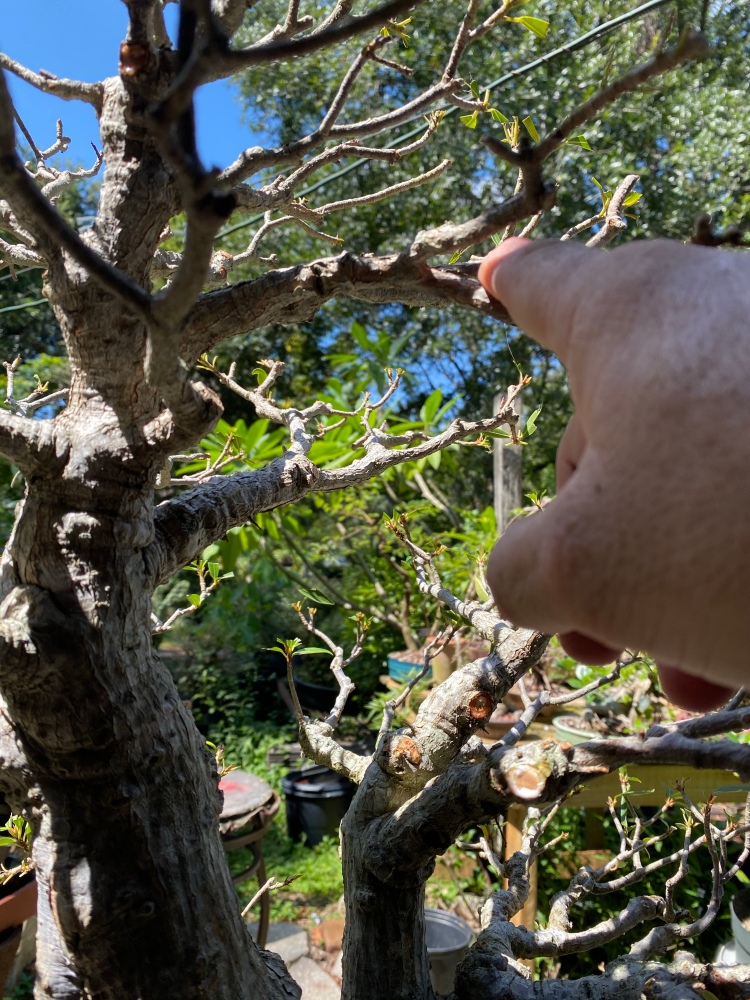 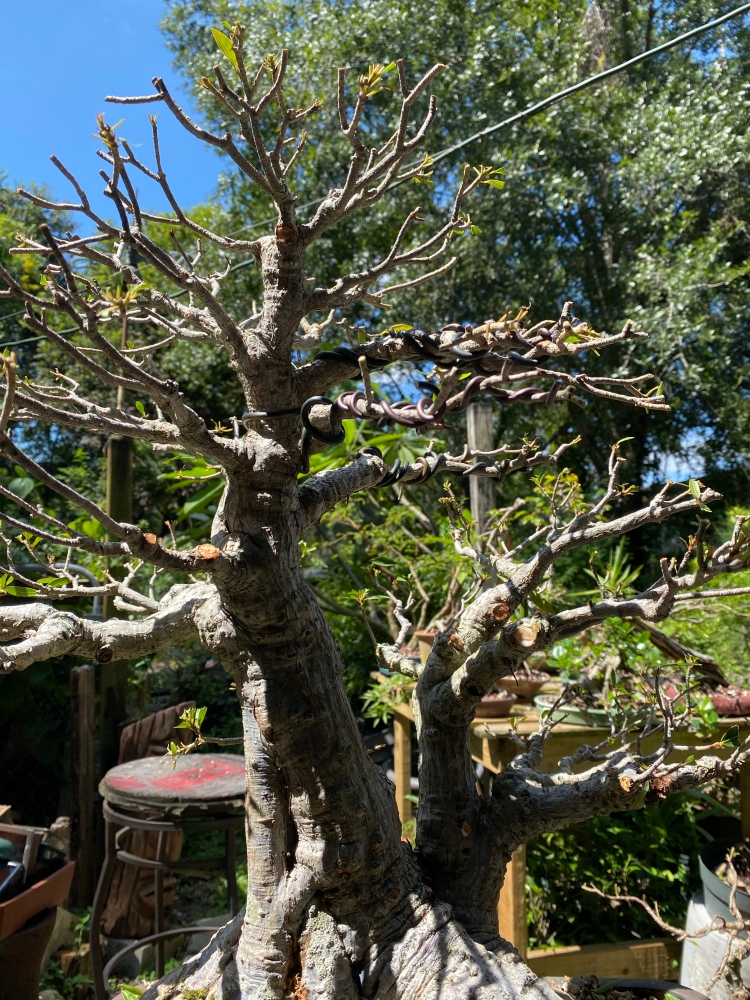 Slowly working my way around the tree.

Whoops, it’s dark again, what is happening?! It’s like time is all fast and slow, and wobbly and all that.

But I’m done. I could look at that all night.

Damn that’s pretty. And I’m not patting myself on the back either, the tree was there, I just gave it a haircut. A styling (that’s where the term comes from, BTW, styling. Like going to a hair stylist and getting a hair cut. Makes sense). I hope I did the tree justice and kept the spirit intact. Maybe Mr. Zane is smiling.

And this is how I’ll end:

Me sitting in the dark, looking at the tree.

It’s just a waiting game now. I’ll remove new shoots that are un-needed and prune to a canopy until spring (March here in Central Florida). If the long range predictions in the farmers almanac go as published, we will have a warmer winter, so I’ll probably have to remove some wire before it cuts in. The pot should be an oval, eventually, but I have all winter to figure that one out.

And here’s a last shot, just because. 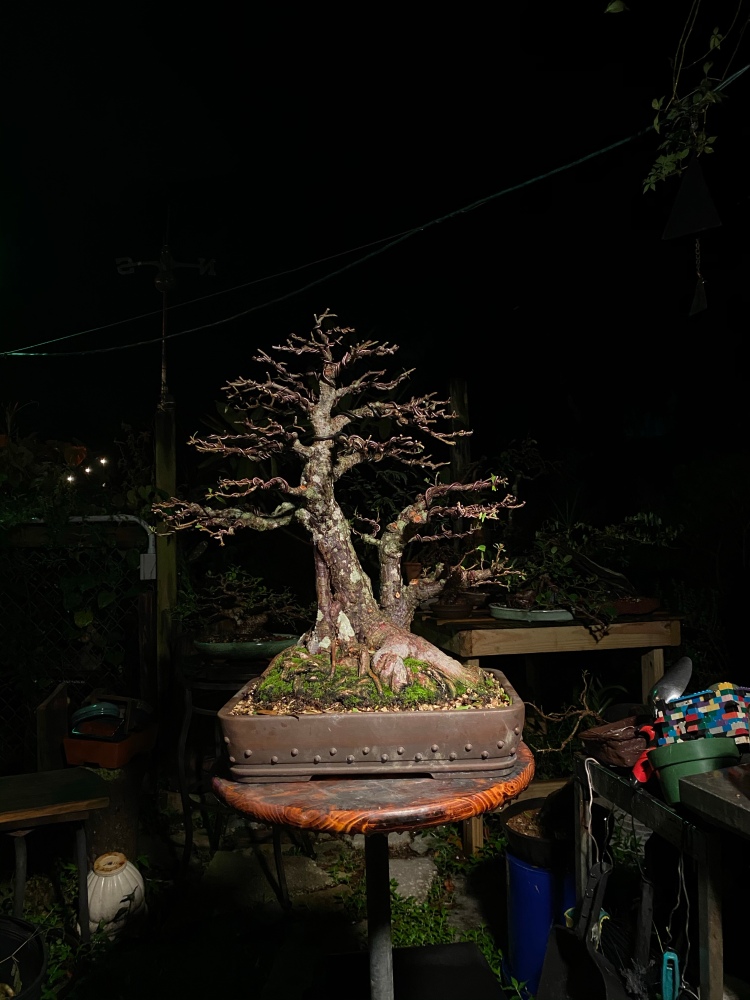