If you remember, in the last elm post I had mentioned a form of propagation called “root cutting”.
This technique works well with elms, ficus salicaria, ficus burt-davii, crepe myrtle and others.
Basically, when you cut off the larger, unneeded roots to fit them into a smaller pot, you save those roots, put them in another pot, and, hopefully, they will grow. 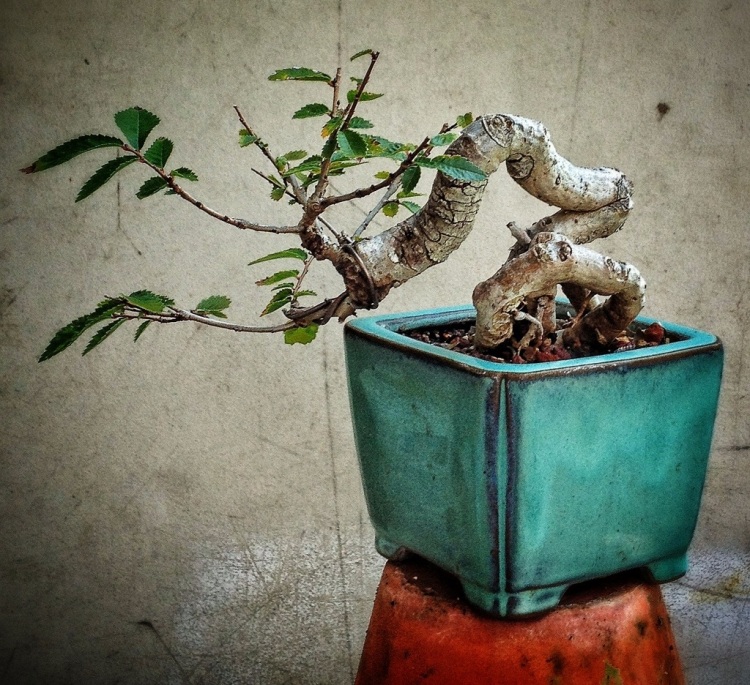 Which is where this tree came from. I got the raw stock from Schley’s Bonsai in Deland. It’s an American elm (believe it or not) root cutting. The American elm (ulmus Americana) has been decimated over the last century by Dutch Elm Disease and is not found much in the wild anymore.
I’m going to style two different root cuttings; one Chinese elm and one winged elm. 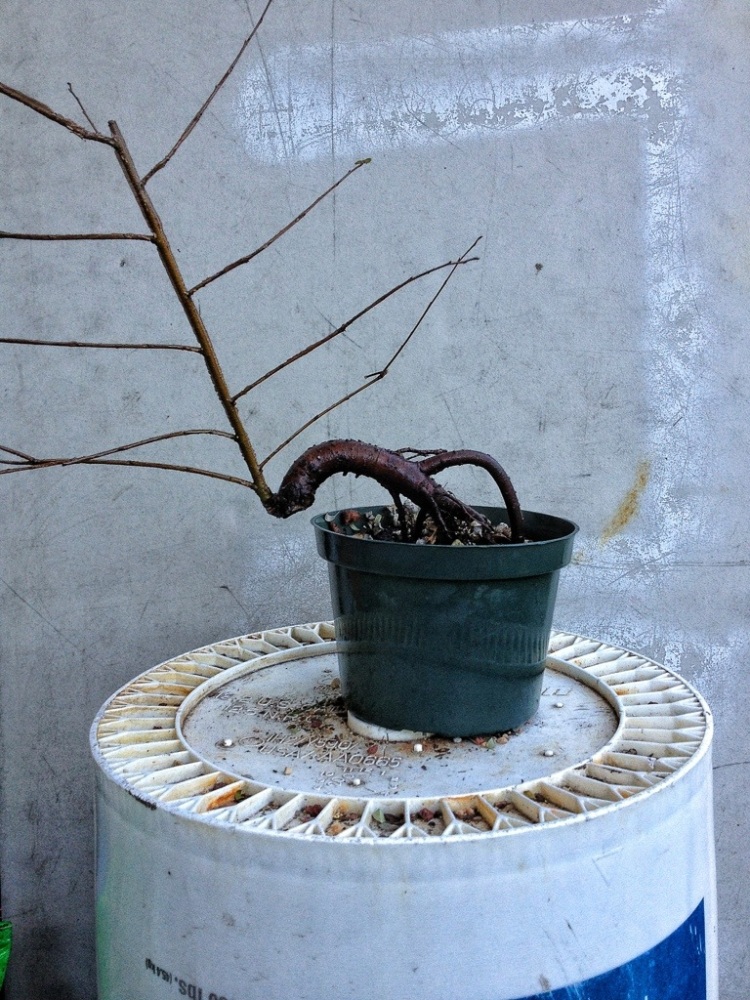 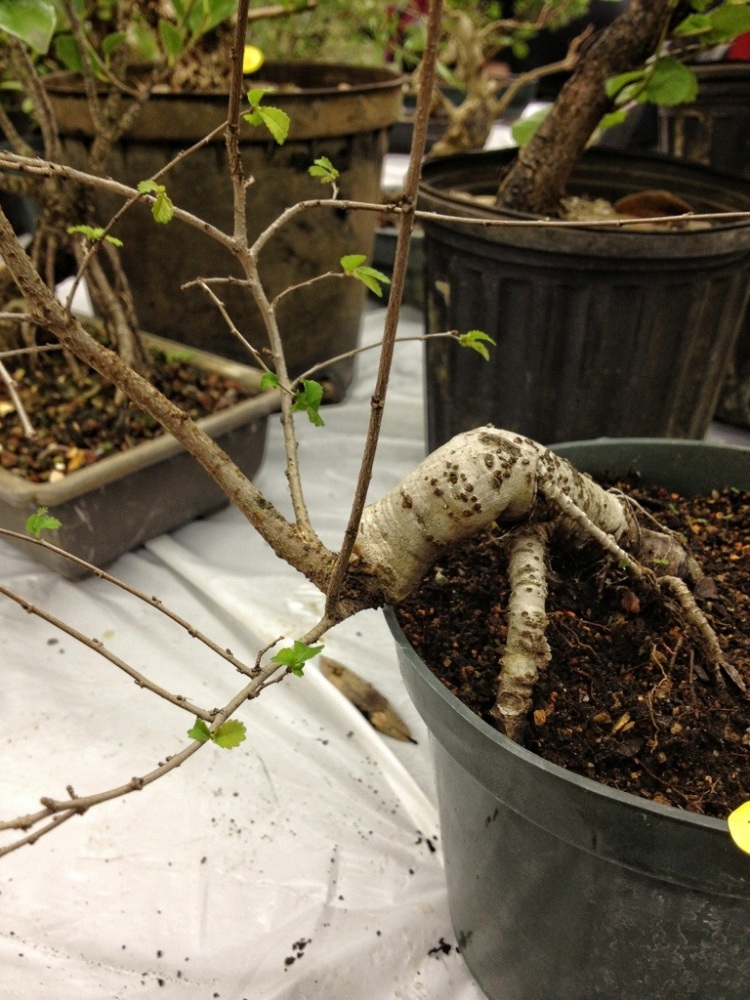 Maybe a bit too much. The shoot might be a somewhat hard to bend

Especially here. For one, it will probably just break off. And elm lignifies quicker closer to the trunk.
If we massage it a bit (whoever would have thought that massaging wood would make it softer and easier to bend?)

That’s it without wire and not touching it. 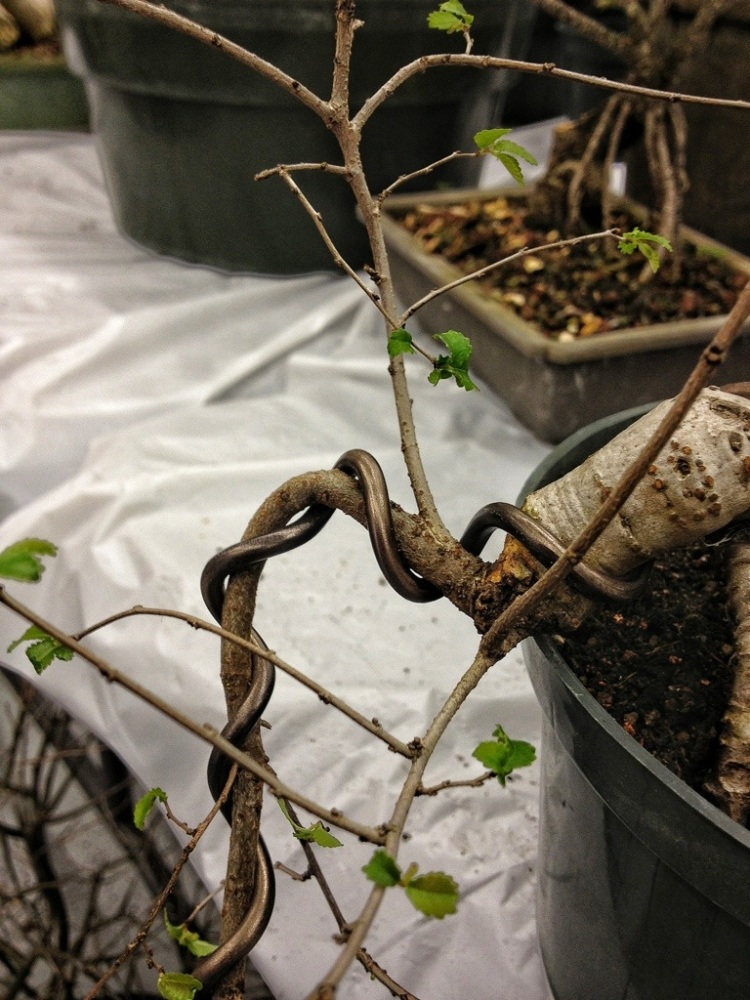 I’m going to make my bends where shoots are. As it grows it will look more natural.

And I’m going to prune off some unneeded shoots.

The bending is extreme on purpose. As the tree grows out the curves will soften and become less severe.

Some pruning for taper.

And some eagle eye views

Like I said, the bends will smooth over as time goes on. And I’m sure there will be at least 2 cuts for taper as the “trunk” thickens. This tree is, as they say in the trade, still in “production mode”. Therefore it stays in the nursery pot for a few more years. Maybe even getting bumped up once into a one gallon pot next year.
The thing about an elm, once the roots hit the edges of the pot, the growth slows considerably. The fastest growth, remarkably, is just after a repot.
So,it’s not just the Chinese elm we can do this to; here is that winged elm next.

This one needs its attitude adjusted methinks

And let’s geld him too 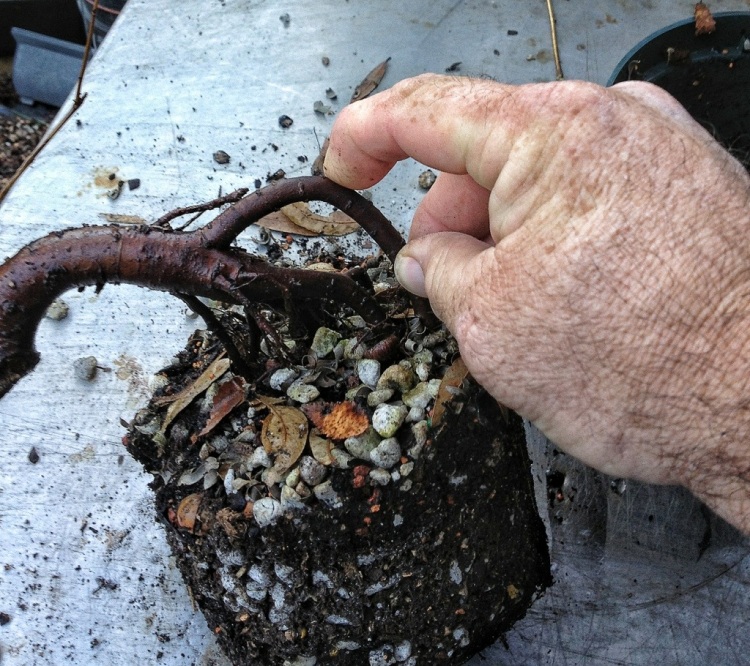 This will be an opportunity to actually demonstrate how to propagate in this way. I’m a clever blogger now, aren’t I?
It is technically a root cutting off of a root cutting.

And Bob’s your uncle.
It’s as simple as that!
But wait!
There’s more!
We begin with the root

As it shows, the new shoots grow from the edge. I think it’s because the auxin (that hormone which causes bud growth) has nowhere else to go. (Read this link for a complex discussion of meristem differentiation.) 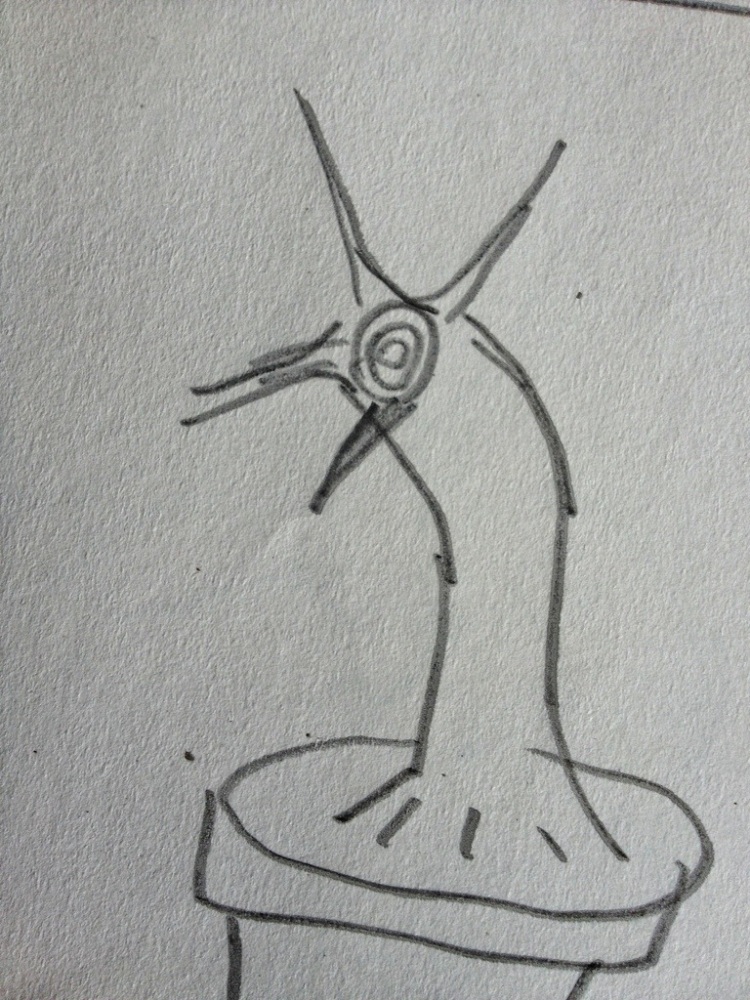 The problem is that you will get too many shoots. 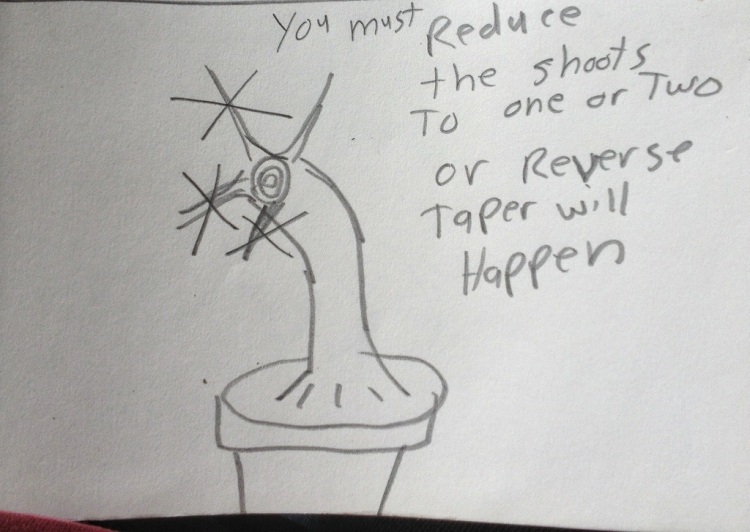 If you don’t prune out the excess until you have only one shoot.

You’ll end up with a weird, knobby thing.

If you prune to one, that one shoot will catch up with the trunk pretty quickly. 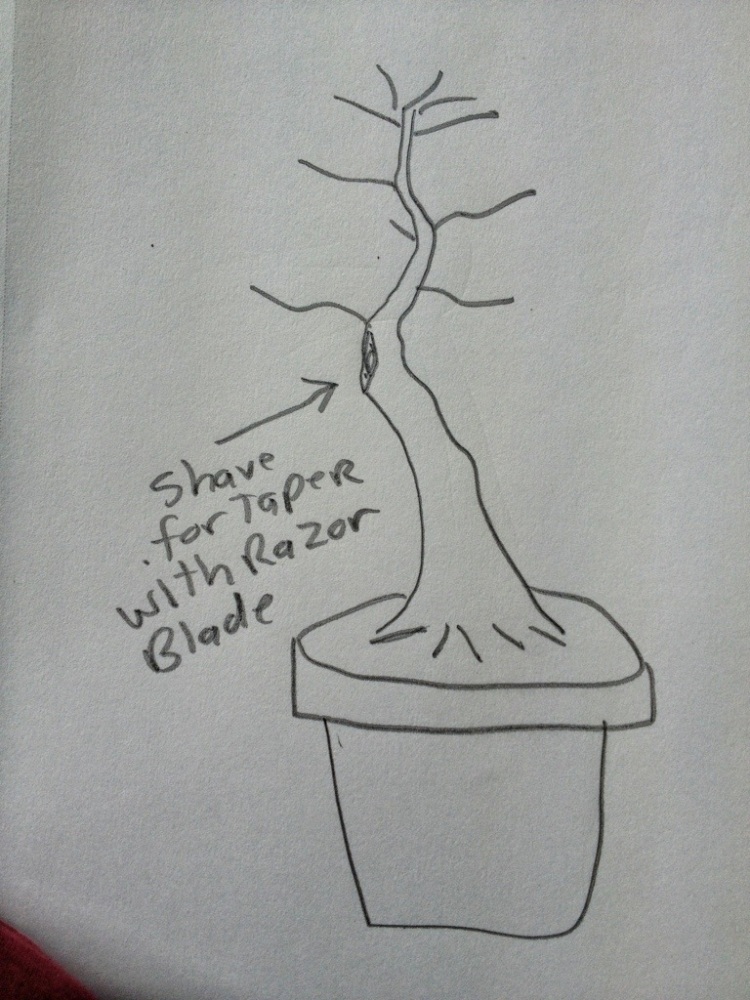 But take note, you won’t get a shoot anywhere on the “root” part. Only from the original cut and above.
Back to the winged elm. 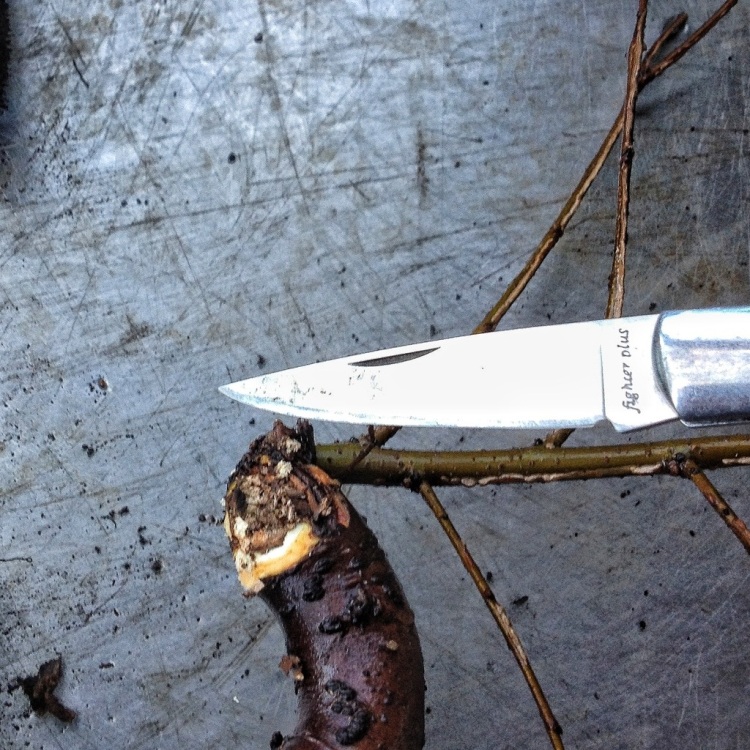 While its out of the pot is the best time to dress the original cut.

I make sure I seal the cut ends.

I’ll bend where my pointer finger is pointing to and where my thumb is. 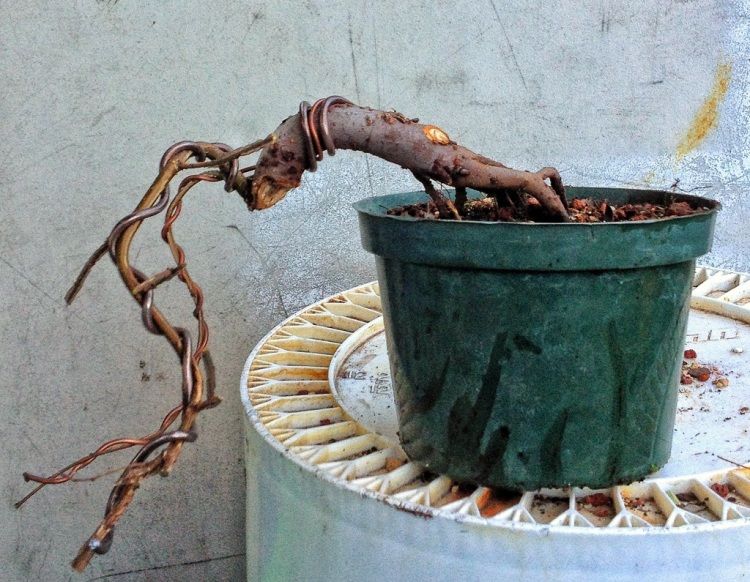 in the pot it goes. One more year of training in this pot. I’m using some good bonsai soil in it. I’ll have to check this one more often because of the faster draining mix but I should get better growth.
One more technique for root cuttings. I have a diagram:

Got it?
Here is a result

This is winged elm. One year’s growth!

If I hadn’t topped it I believe it would have been six feet of growth. Amazing.

My plans for it this year is to put some soil underneath and let it grow some more.
As you might be able to tell, I really like root cuttings.
Here are some examples

This is a cute little one. Not much to it but a lot of fun. Chinese elm

This is a winged elm. I’ve shown it before. The twist on that one can’t be duplicated. 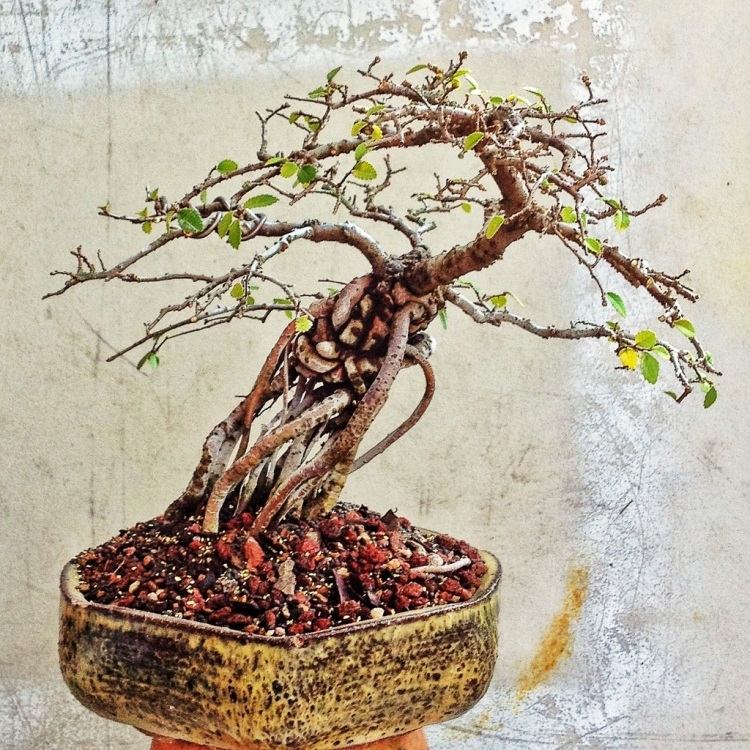 I’ve never found another like it and I can’t seem to duplicate it.

And my favorite at the moment 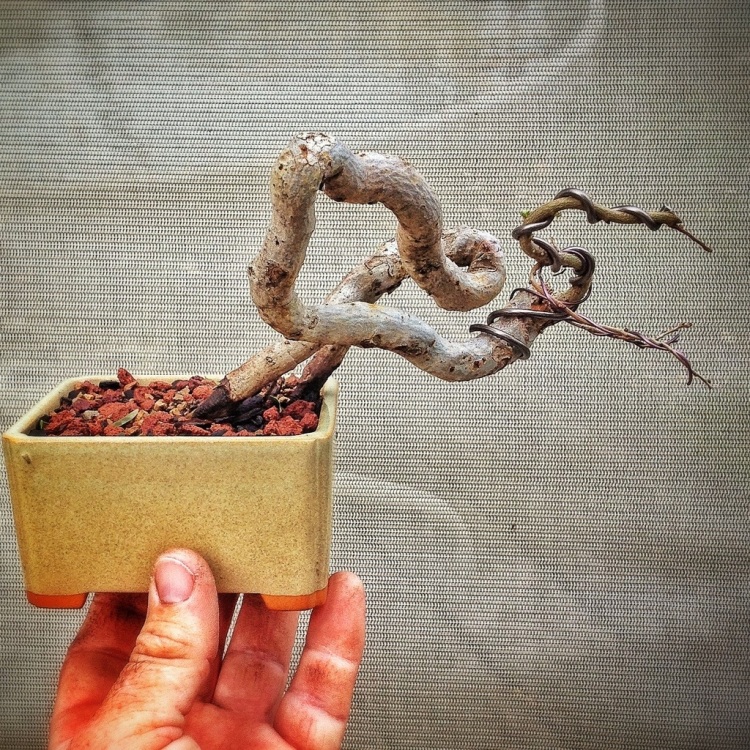 This sweet little tree is another one I stole ( I paid for both of them. Without dickering I might add. He was not happy selling them to me) from Schley’s Bonsai. It’s also an American elm. I see great things for this one. Definitely not for sale.

Not bad material for stuff usually thrown on the compost heap, huh?

And since I haven’t done a sketch in a while, here’s one for the Chinese elm above.