This is my work 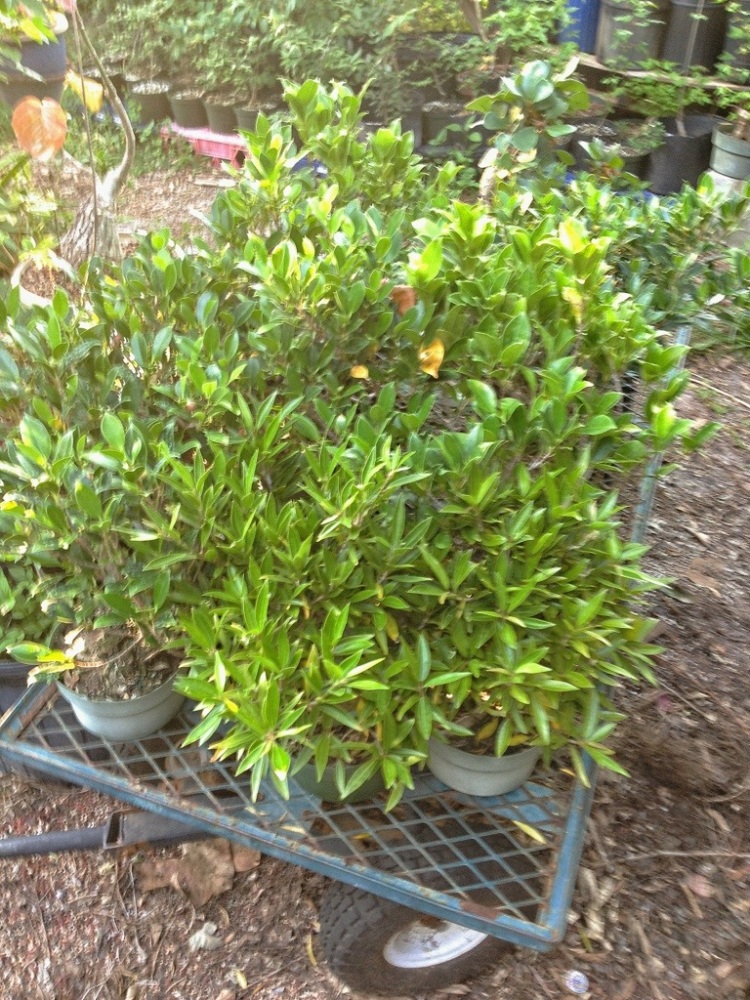 I picked up some stock plants recently to sell at the upcoming 2013 Bonsai Societies of Florida State convention.
My aim is to style, root prune and make pretty these trees. Some I got for growing out and one or two for my collection.
Here they are individually
They’re all ficus. This one is f. Retusa 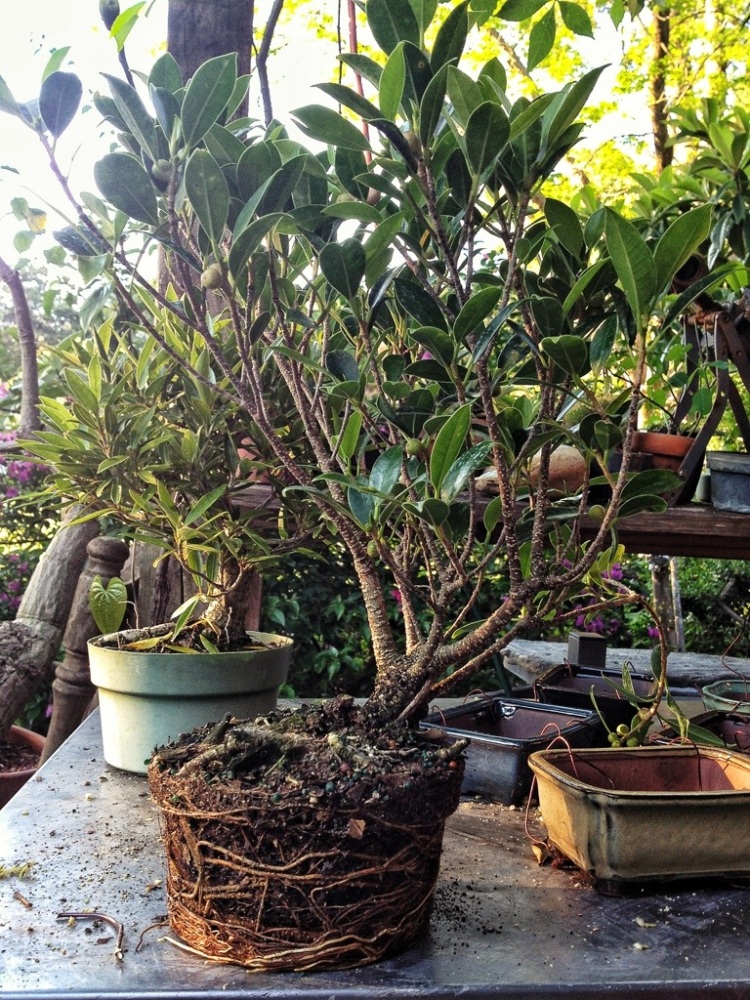 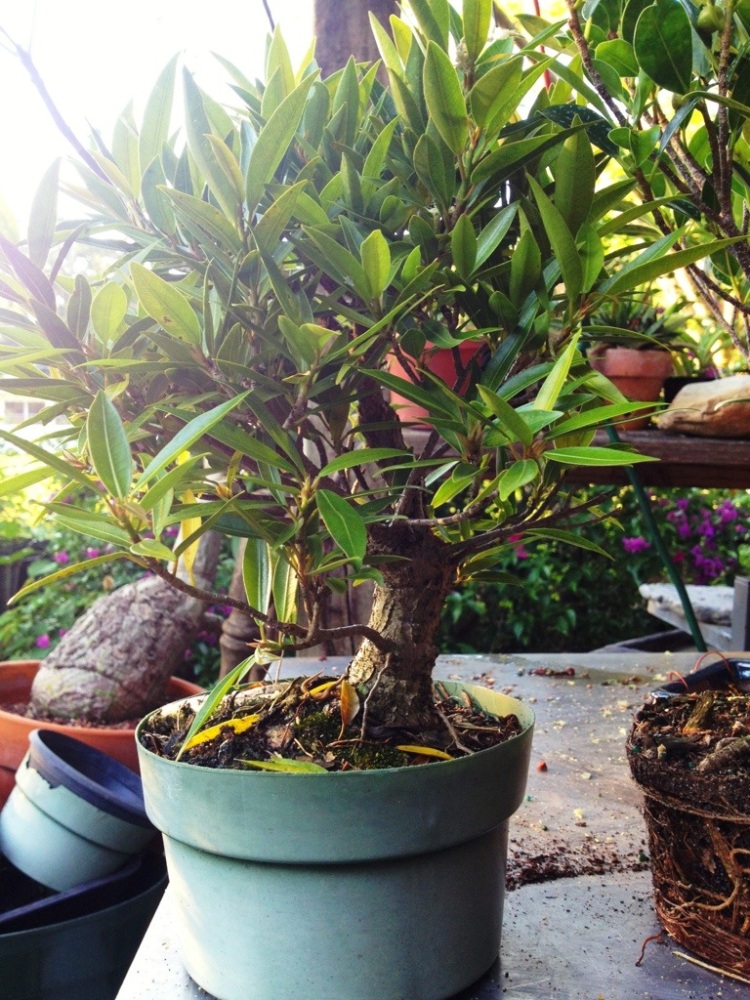 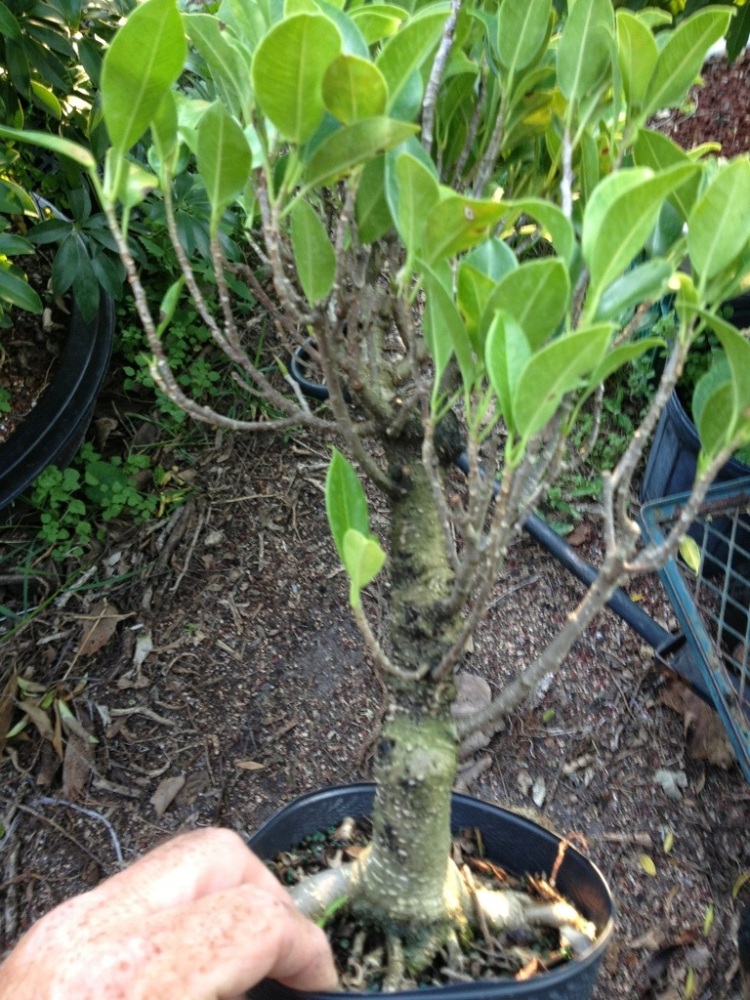 Beginning at the beginning, we have a clump of roots 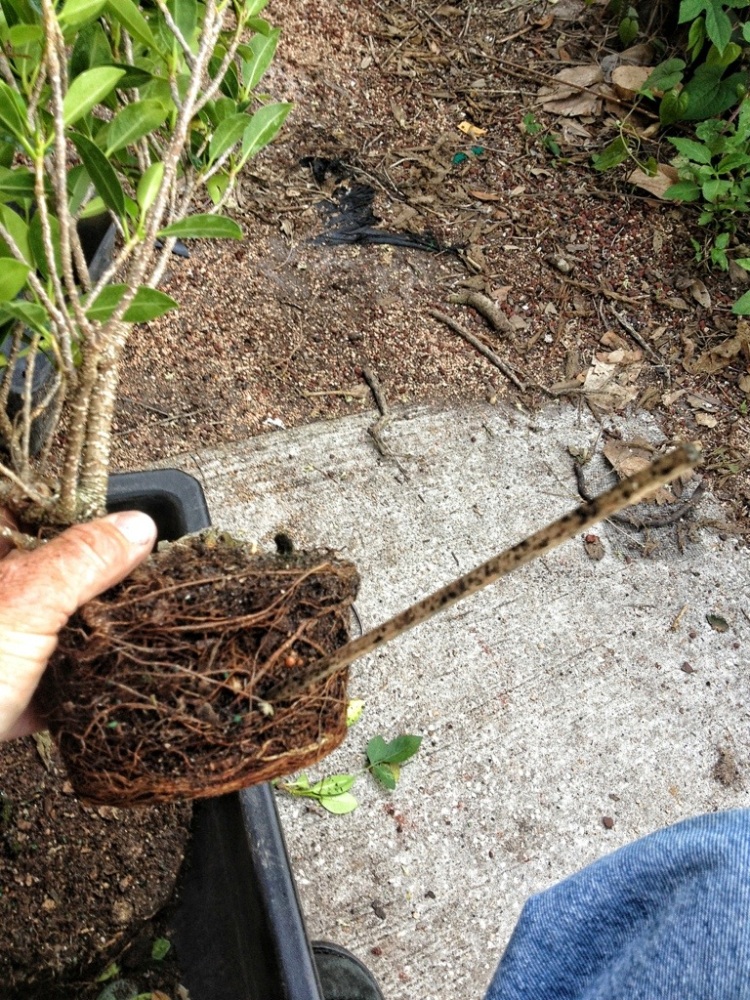 With a chopstick stuck in them.
A lot of the time I will just saw off half of them. But I know these were cuttings and they were planted deep.

That much trunk was under the soil line. I may not keep it but its good to know its there.
These are ficus.
What I can do to these roots I cannot do with other trees.
It’s also May in Florida.
These will have new leaves in 1-2 weeks.
Do not think you can do this in Indiana or Edmonton like I can here in Florida.
I must underline this, the time to repot or initial pot is when nighttime temps are about 60 degrees Fahrenheit. Not in the winter or when the tree is dormant.
This root

which is tough to see; how’s this? 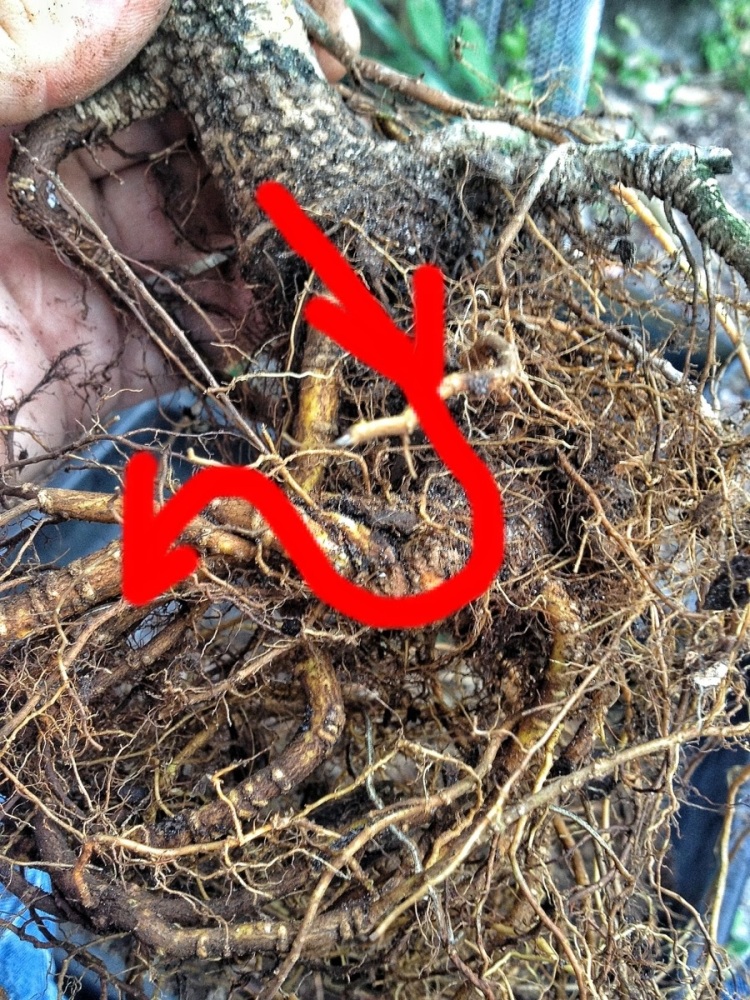 It must go, plus a lot of the trunk that was buried has to be removed too

That’s better. It looks like this tree wants to be banyan style so I’ll need a wider pot 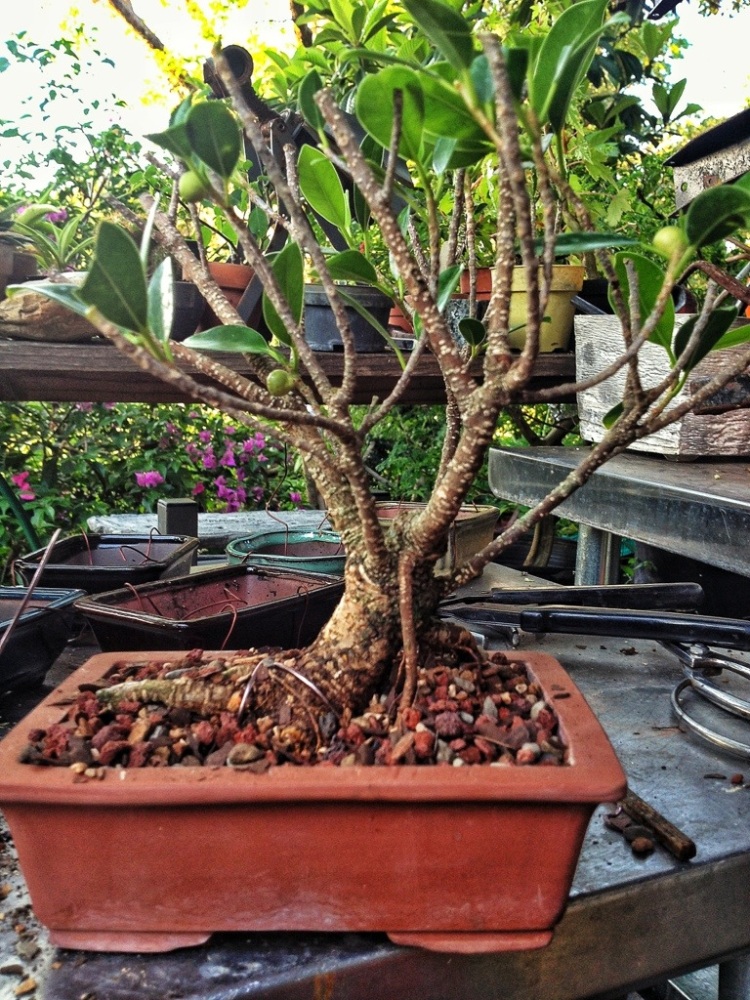 Which should look like this (somewhat) by the end of summer 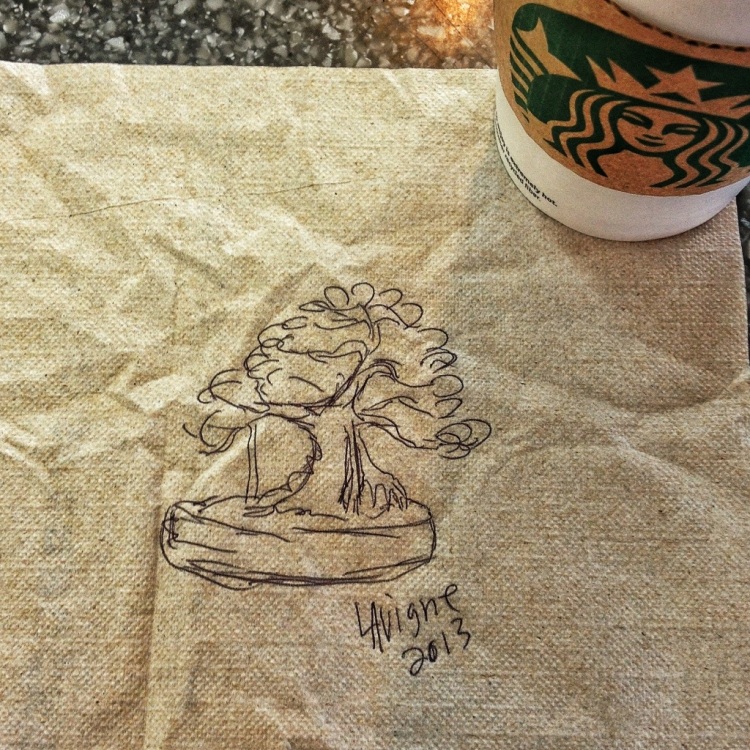 Now, I won’t go into great detail with every tree. I think that might just bore you, so I’ll hit the highlights and such.
Next tree is a retusa 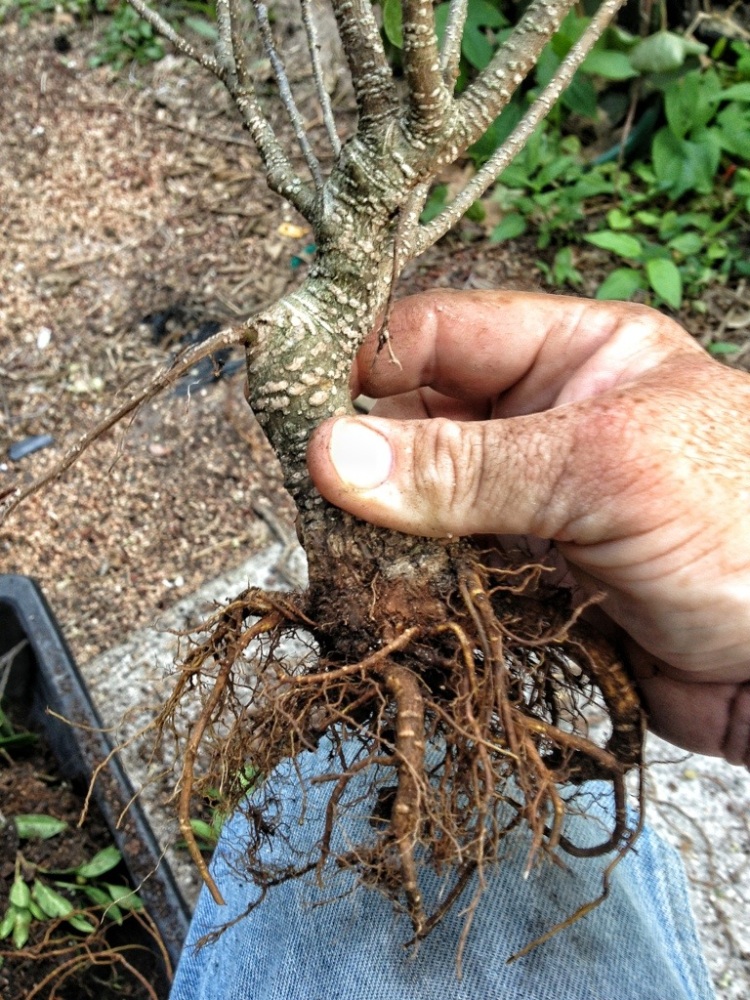 I’ve trimmed the roots and now for some chopping

I cut here to begin ( Law of Bonsai: you can’t glue a branch back on) but I think it needs to be shorter 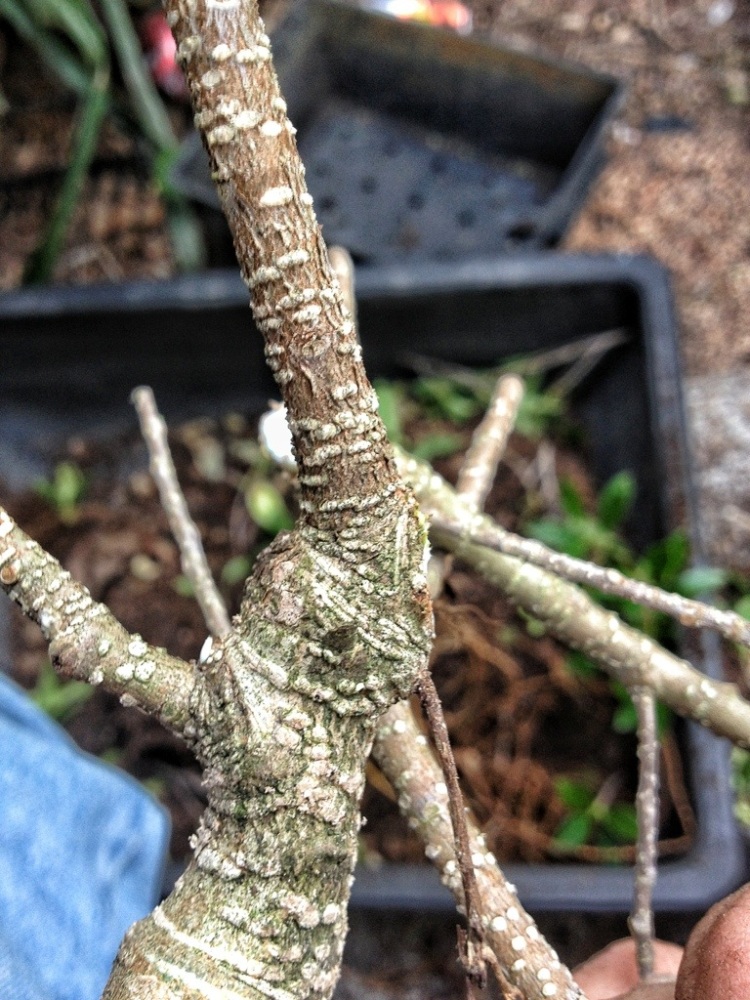 Too much reverse taper that won’t get better with time

Better.
In a pot and turned around 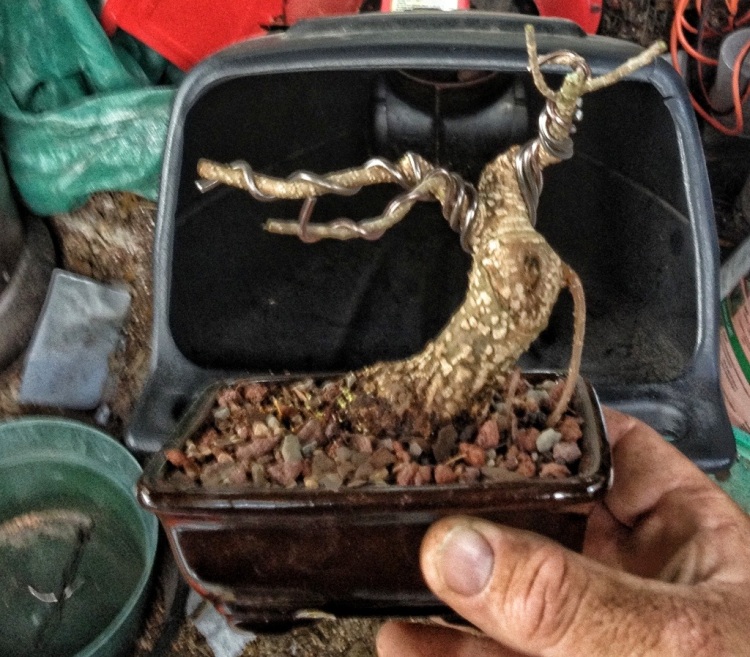 Good.
Next is a f. salicaria 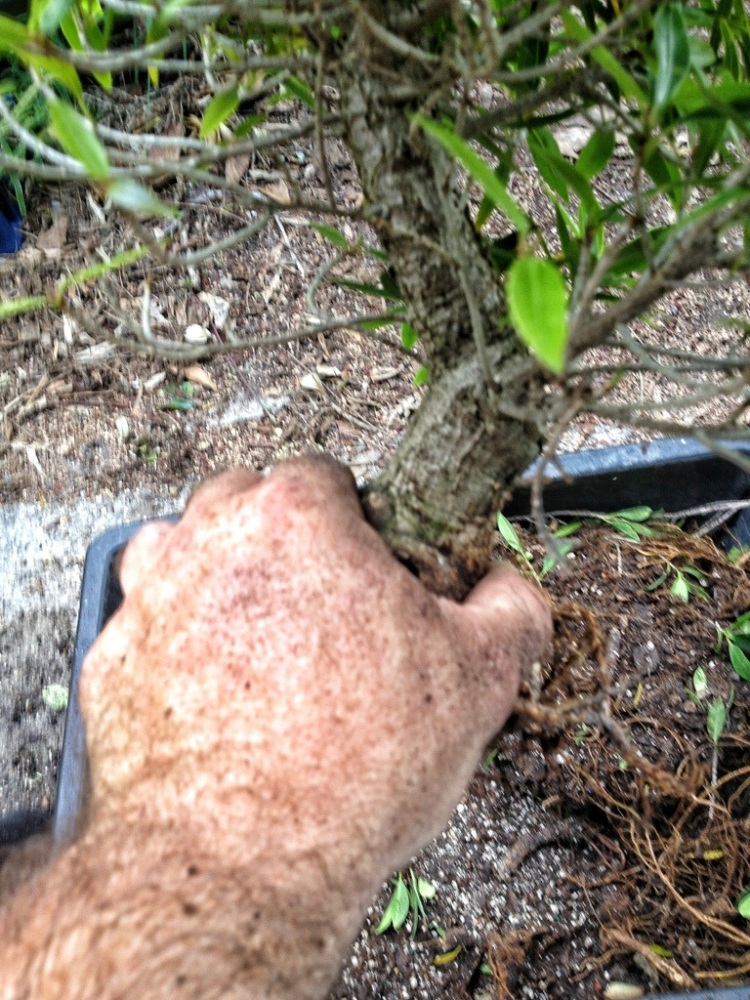 My hand is covering up the trunk that was under the soil.

My thumb is an inch wide at the knuckle. So figure about two inches buried underneath the dirt.
Always dig down. 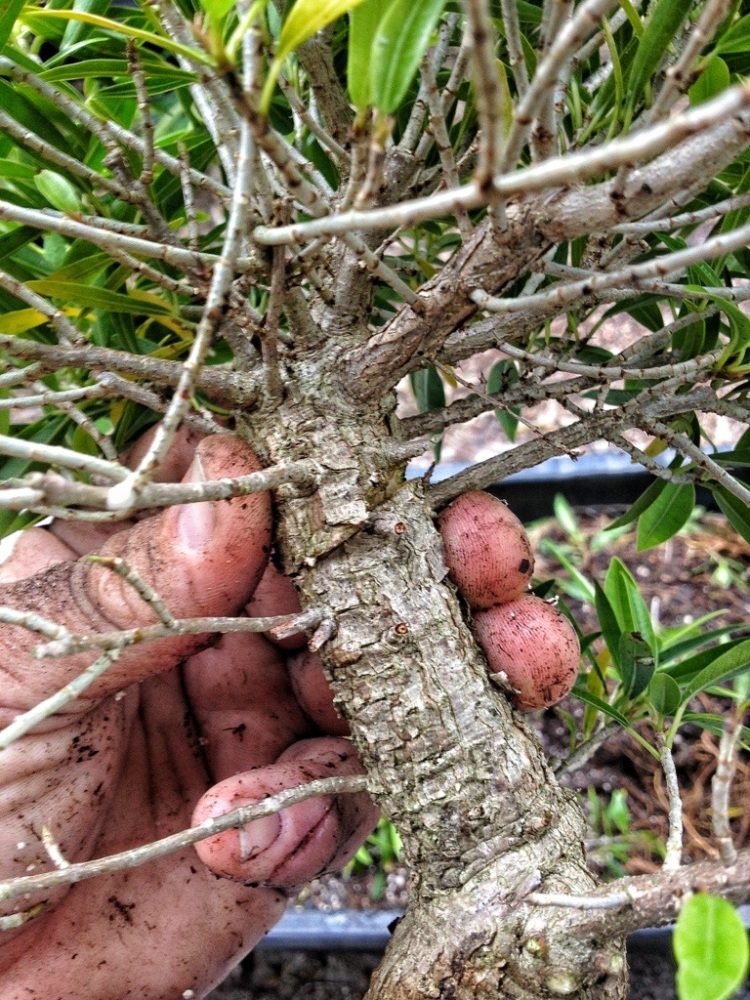 This tree has a lot of branches (good) but it also suffers from a lack of taper.
Thwunk! 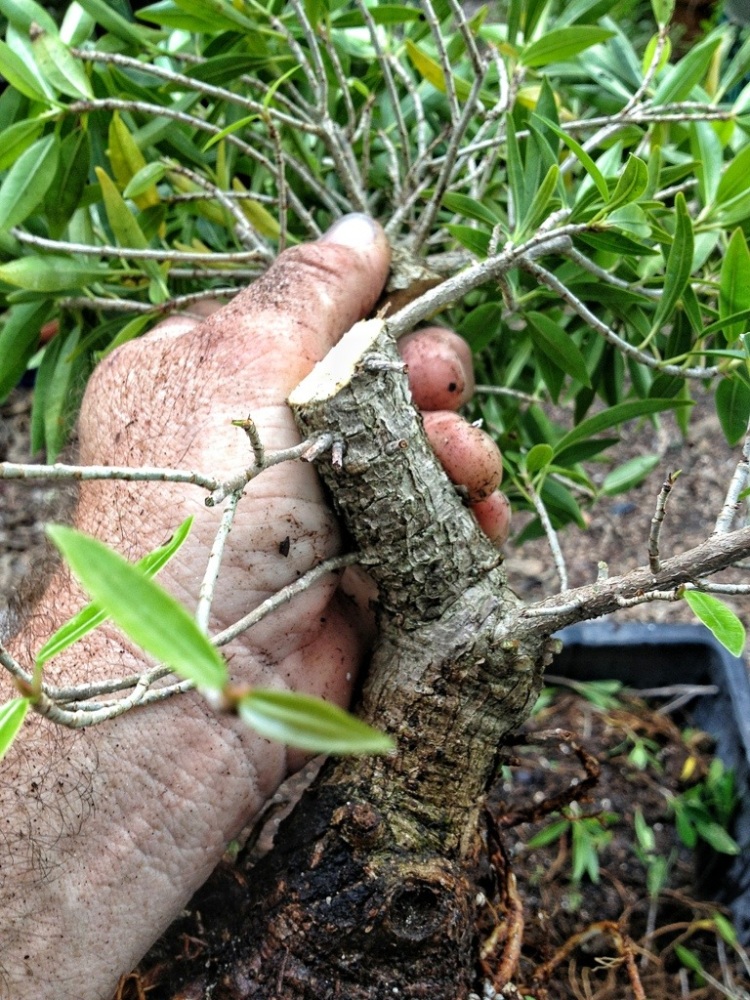 Whoops! Can’t glue that back on either.
But I think it’s for the best 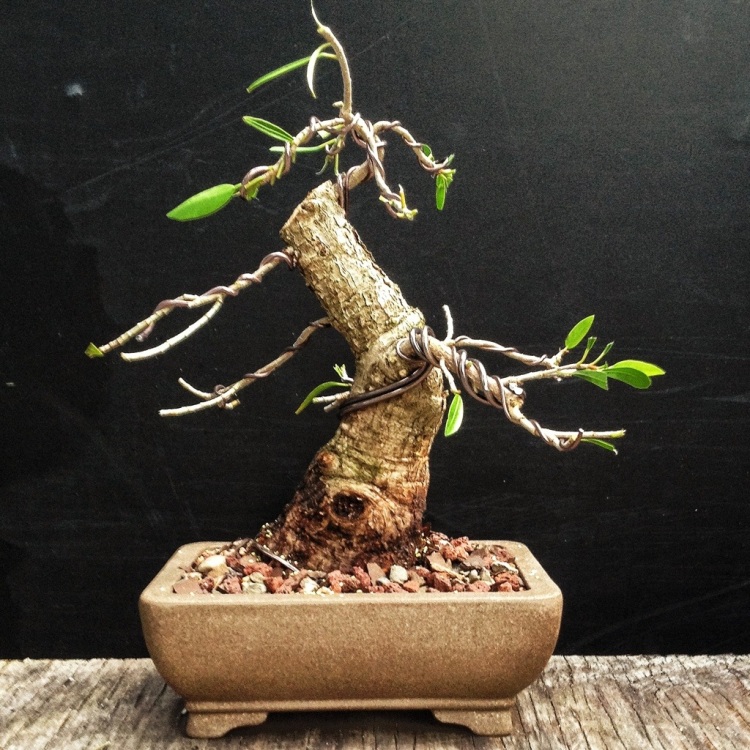 I might have to keep this one myself.
Next!
We have here a typical example of the
F. Microcarpa.

I got this one as a stock plant to chop back and grow out. And take cuttings off of, so…
Whack! 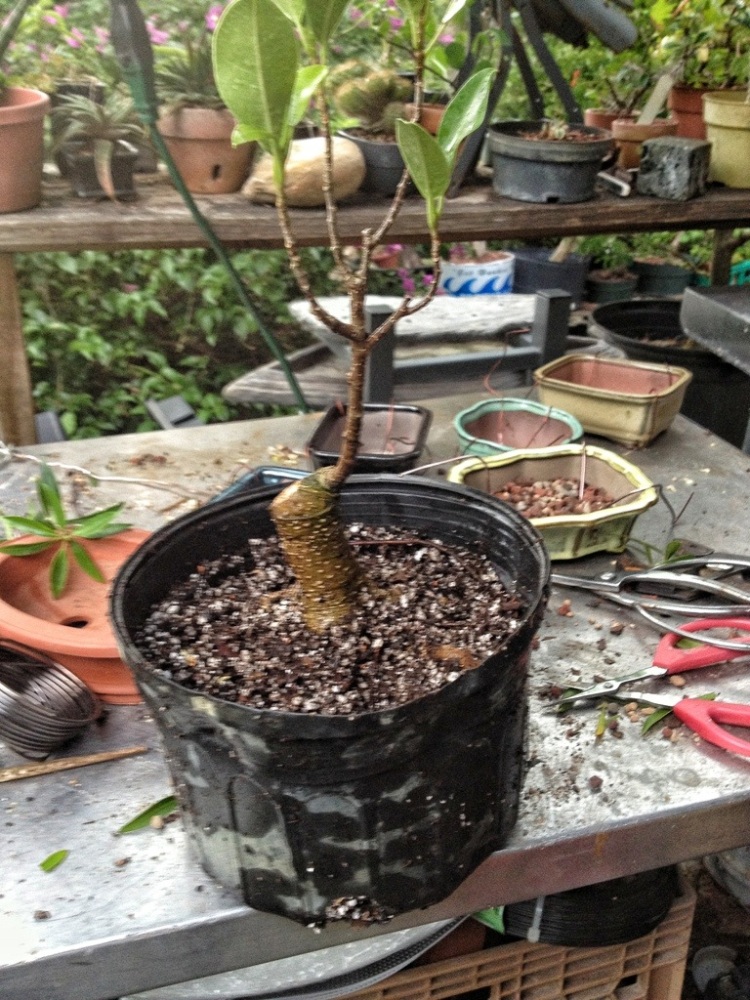 So why did I cut the roots so far back? I only want the surface roots to develop, and if I left the big chunky roots it would give the tree no reason to grow the side ones. Kinda like when you are decandling a pine tree you want to even out the growth.
Next!

A nice f. Salicaria with an amazing nebari.
Unfortunately that’s all it has.
A little sawing

A pot and some wire

It should work.
Don’t see it?
Well, ok, here you go then…

Don’t think so? Give me five years.
Next is another f. Microcarpa I purchased to grow it bigger

Ouroboros-esque, no?
I’ll need to fix those roots.
Why?
Well, they are not very tree-ish.
But aren’t you trying to grow this bigger?
Yes. It’s better to address this now before I have an awesome plant to kill rather than this stock plant. Also, the roots I want to grow won’t grow because all the energy is sucked away into that big honking knob 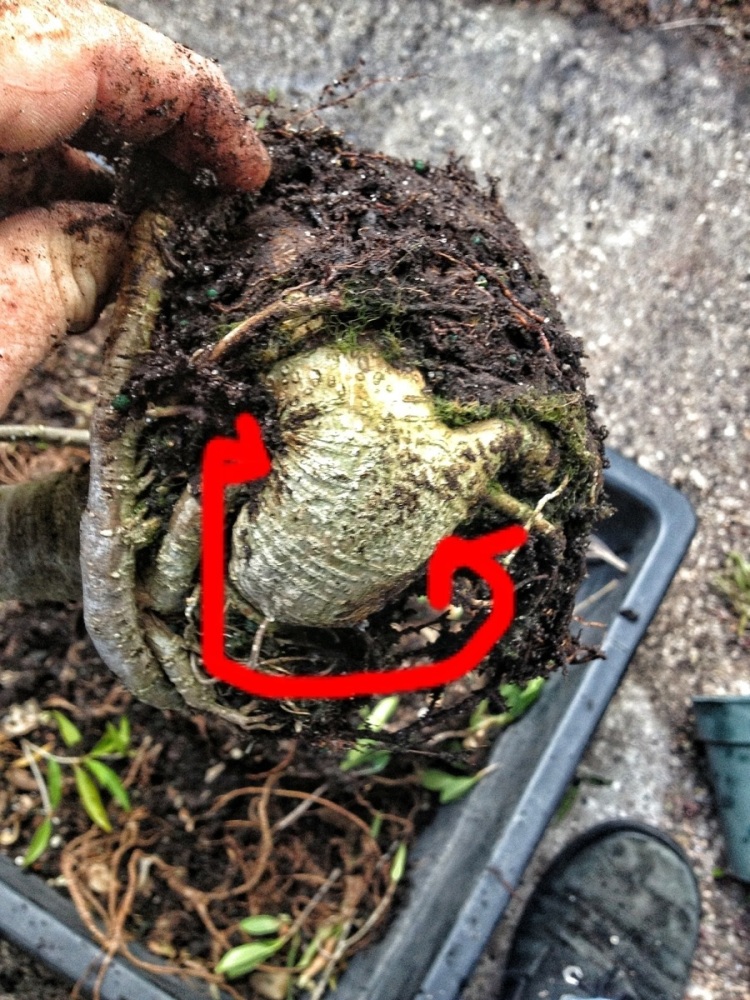 This root needs to catch up

And be on the other side.
Get the saw

This will not kill the tree. 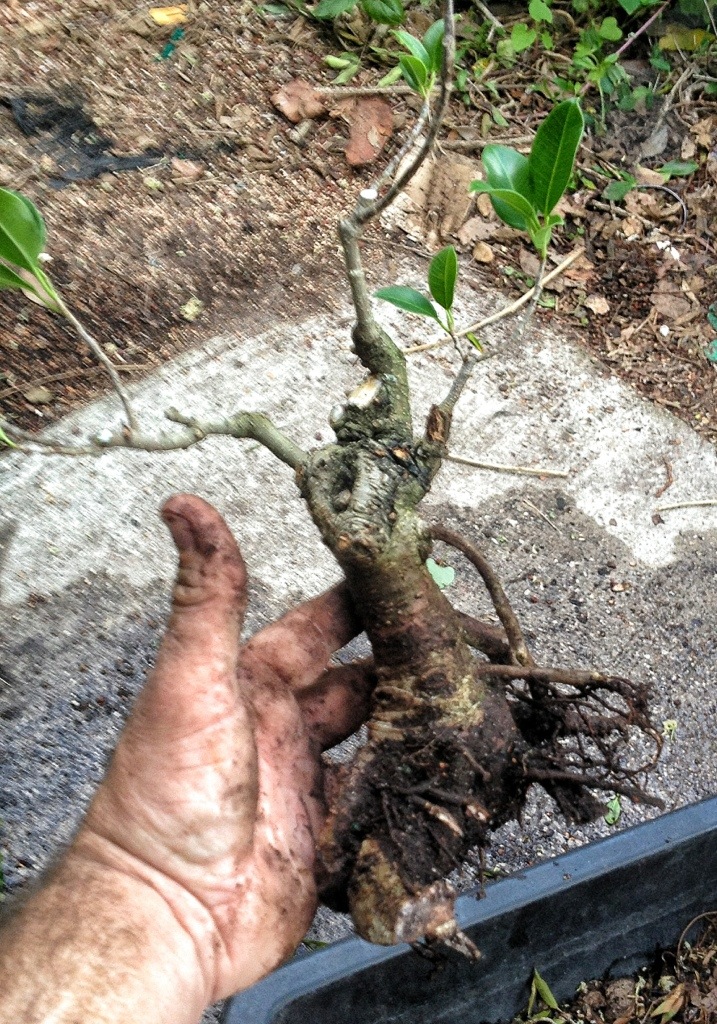 And that’s it. Put it in a 3 gallon pot. Let it grow.
Next we have this sweet f. Green Island

Nice root spread. It could be a cascade 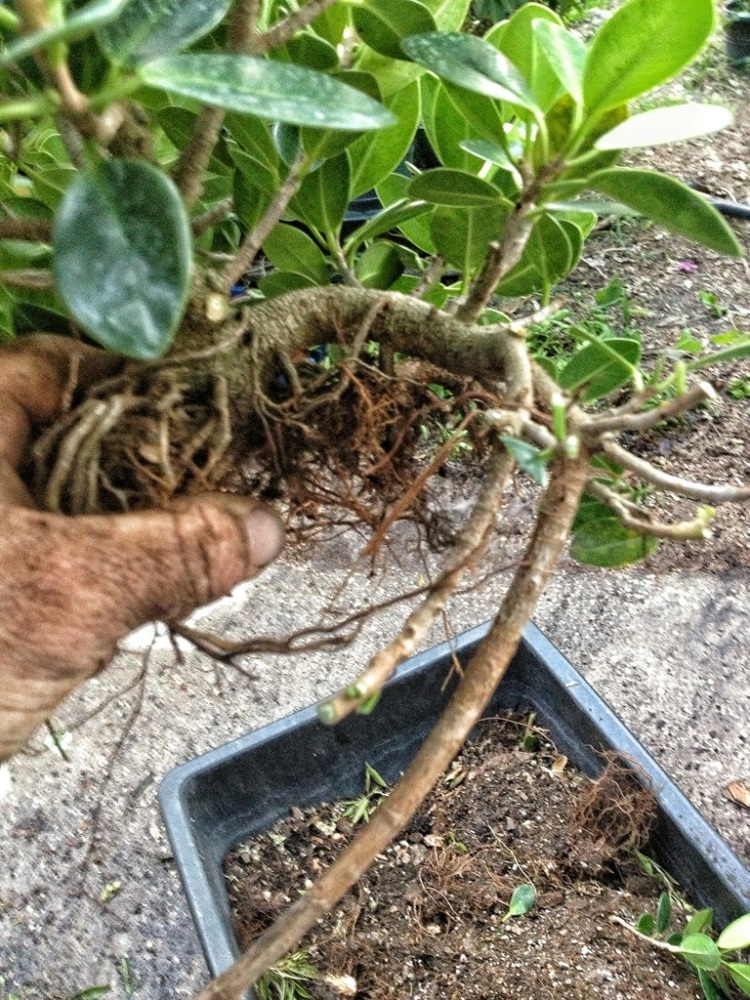 with that long, low branch but I have a better idea. 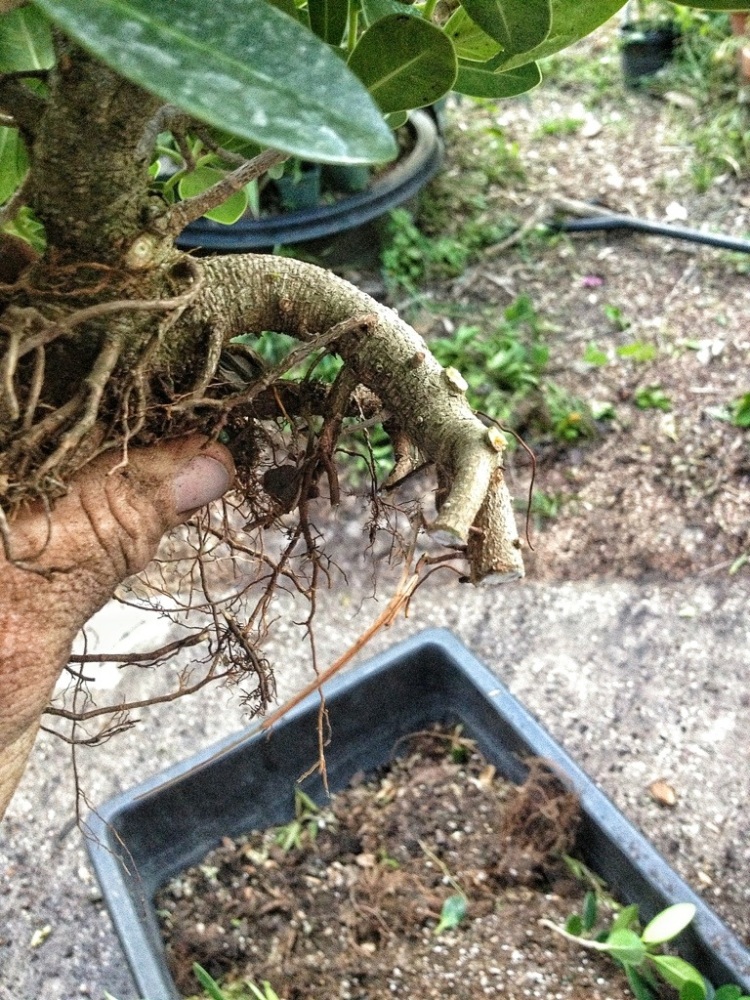 It will be a root instead. 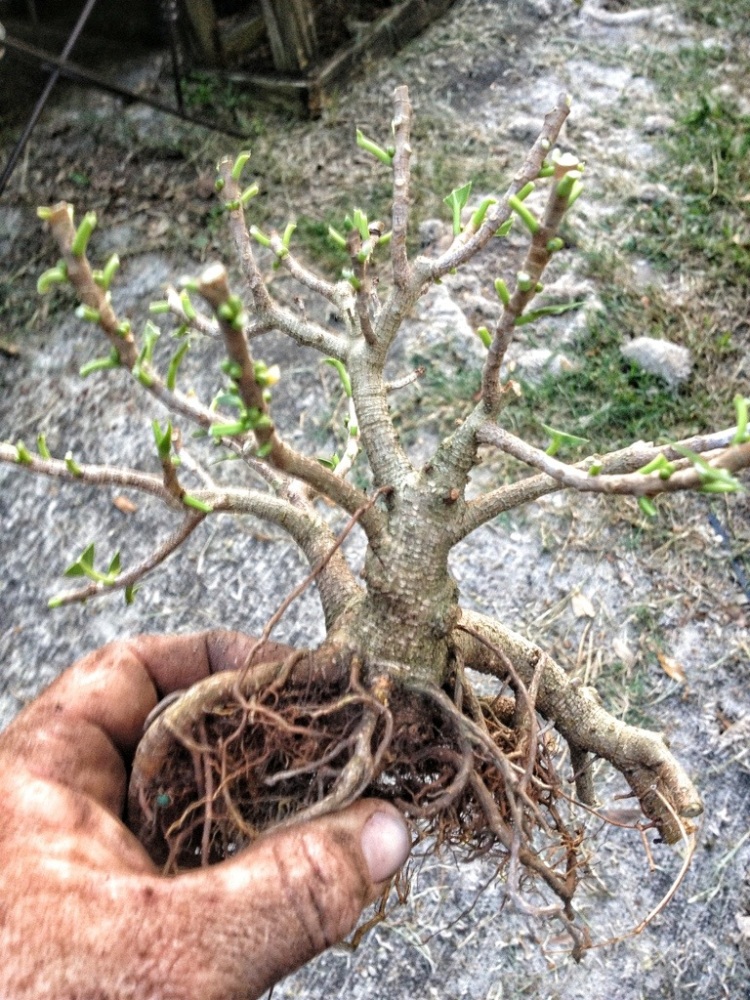 No, really. It’s low enough to pull it off and it works.
See?

That’s a trick you can use if you’re in a growing area that doesn’t promote aerial roots.
Next

Another tiger bark (retusa).
Where my fingers are holding it is where the soil line was. This is a recurring theme with this post.
Always dig down.
A quick trim

No wire on this one… I can’t do all the work.
The next tree is one that truly called to me when I saw it.

Pretty respectable, right?
Wait until you see under the soil 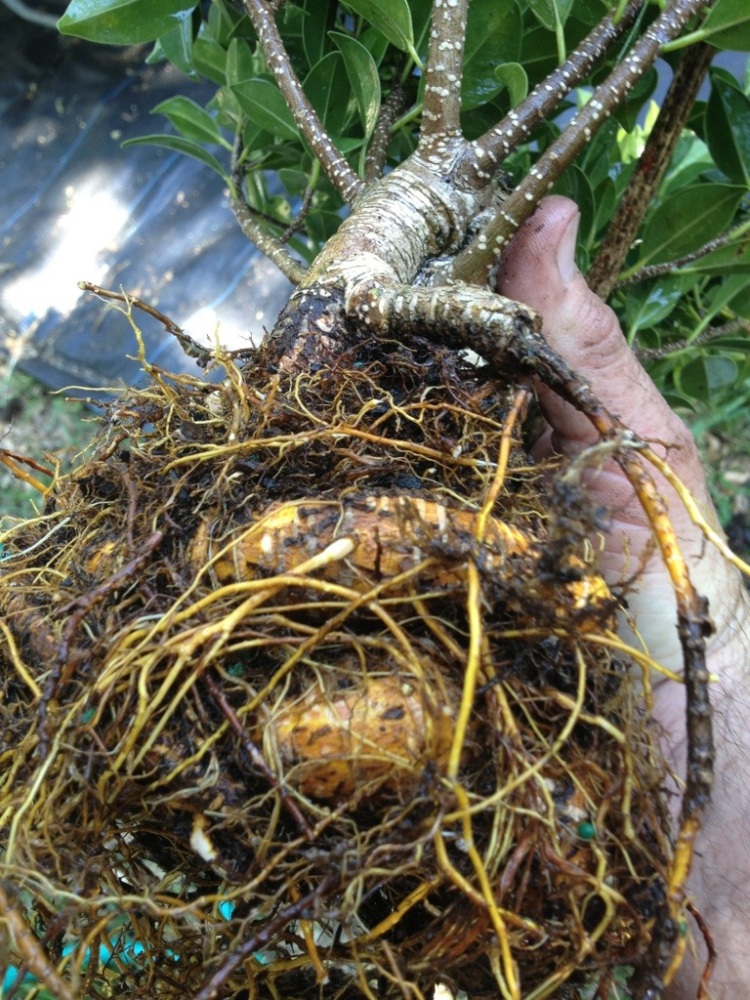 It’s been in this pot a long time.
You know the drill by now, cut, saw, cajole.
And the roots now 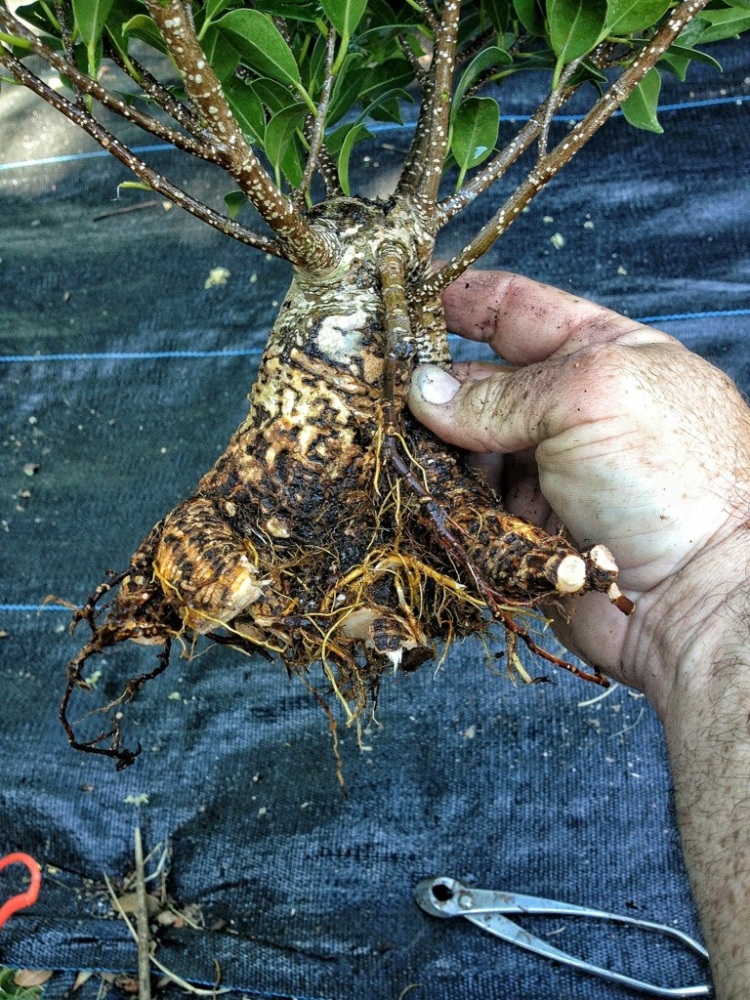 What do you think of that?
All wired and potted 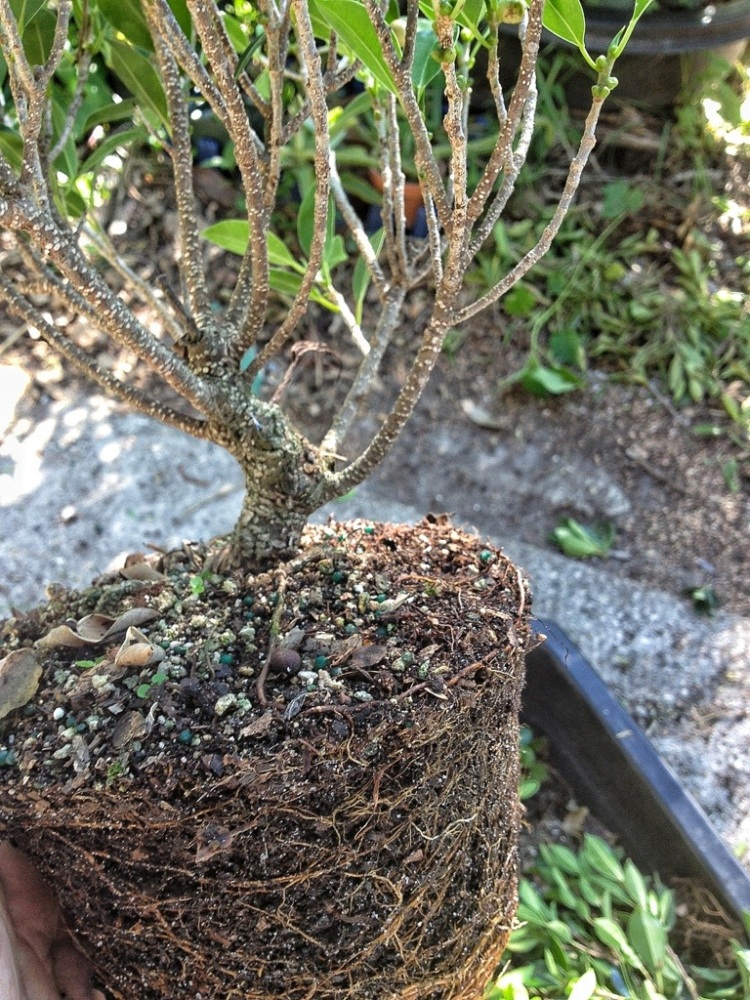 So this one really illustrates the theme here. I thought this would be a cute little tree. Until I dug down that is 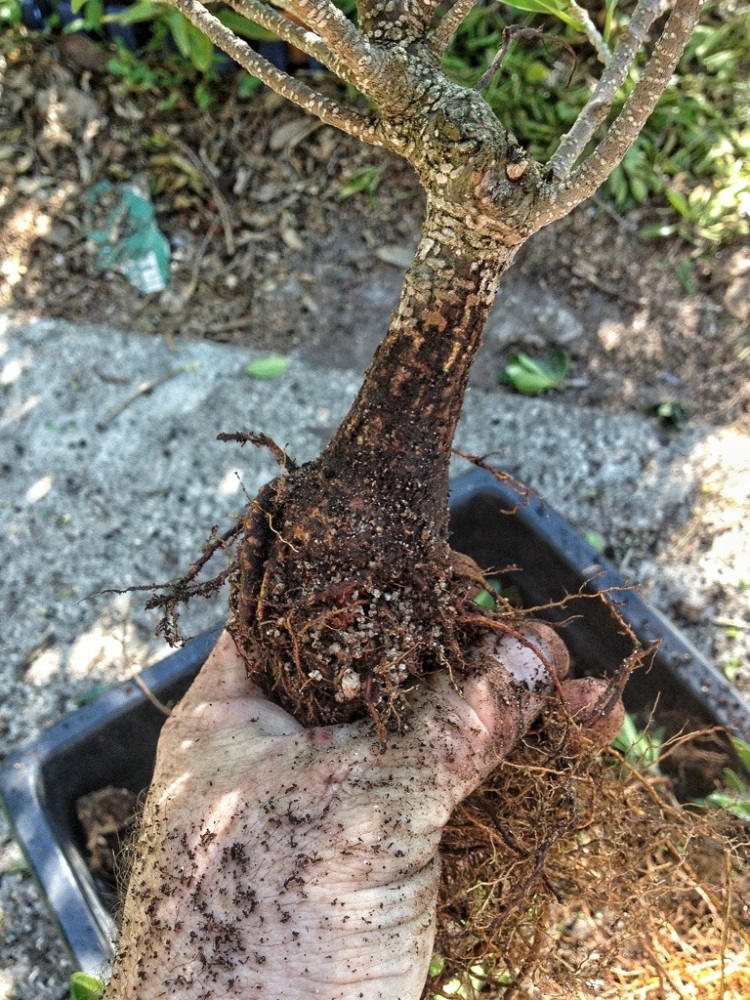 This is the same tree. I wouldn’t try to trick you.
Wire and pot

It’s still a little tree but not a mame like I was hoping for.
These next two I styled and potted at a demonstration so I don’t have any before pics for you

They turned out well I think.

And the last tree is that f. triangularis. 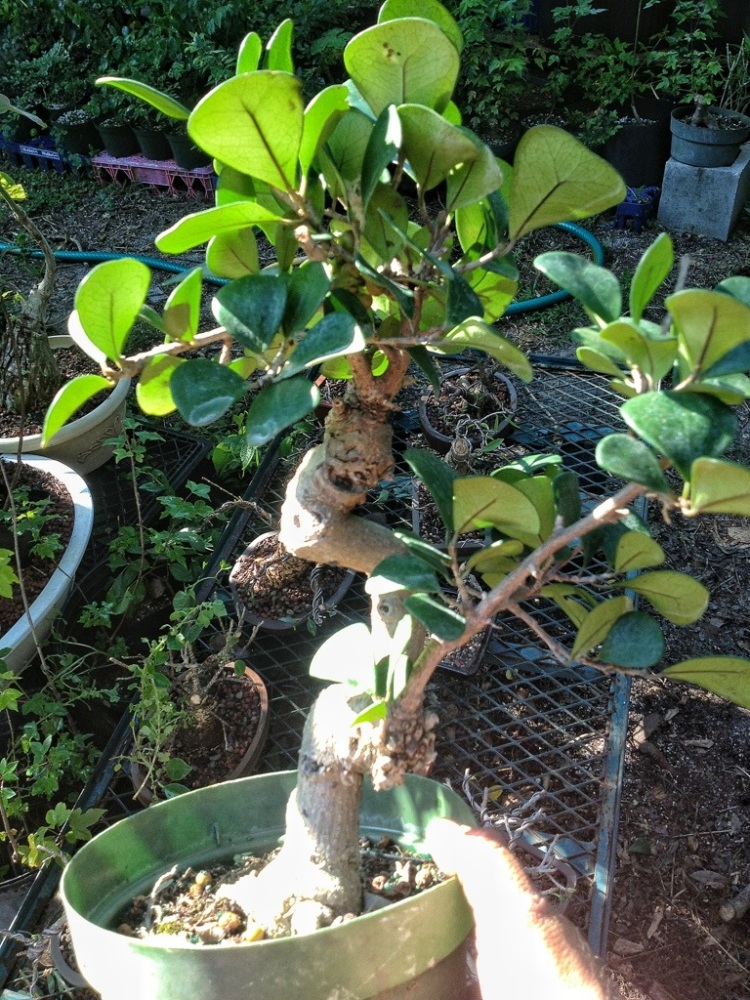 This one is special though. It will get its own post. Sorry.
Here are the trees (minus the stock ones I’m growing) and a teaser on the triangularis (if you zoom in).

I could have done individual posts on these trees and maybe even made the posts interesting. But the techniques were all the same.
And the lesson: with a ficus that was grown from a cutting, always dig down to find the true base. Don’t trust what you see at the soil line.