That’s David, moving a big Chinese elm from its pedestal in Agresta Gardens to Ben’s Studio.

Our task we have chosen today: repot the brute. 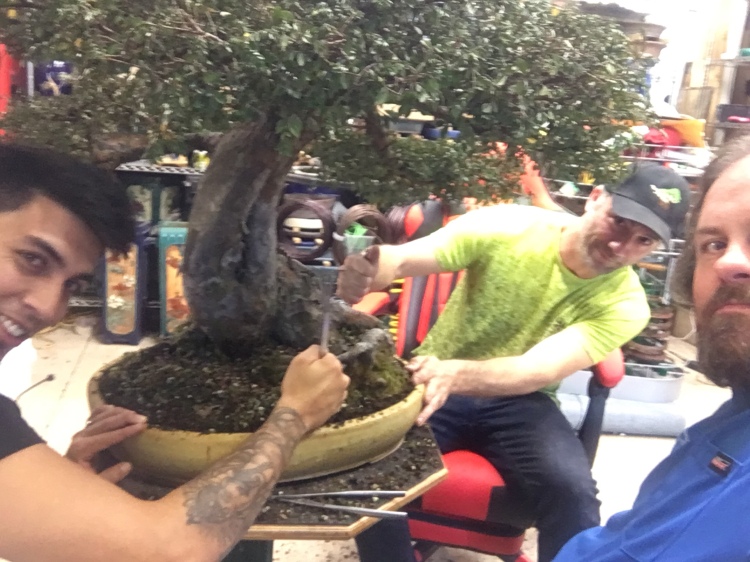 David on the left, with the amazingly coiffed coif. Ben in the middle, shirt all bright chartreuse and everything, and with the bonsai-appropriate chapeaux, and moi, wearing an uncharacteristically blue shirt, taking the selfie.

Dave came up from Miami to hang out with me and Ben (he had some kind of business too, but who cares about that, bonsai before dollar bills, I say).

Some background on the tree-

It was imported from China (its a Chinese elm, ulmus parviflora) around 1992 or so (makes me feel old when I do that math, I graduated high school in ’93, too many years ago) to a nursery in Mississippi, and purchased by the late Dale Cochoy (here is a post about Dale)

It was in Dale’s collection for about twenty years, in Ohio, when, in a huge reduction in that collection, he sold it (and most all of it) to a place in Michigan. It was bought from that nursery by a man named Dustin, then living in Ann Arbor, who then, as many do in their retirement, moved to Florida. And he eventually sold it to a bonsai place in DeLand.

And that’s where Ben got it. Ben likes trees with histories. Ben and his penchant for the stories and historical trees is a true boon to the bonsai world in the USA. We need more Bens to continue the stories.

Ben entered it for consideration for the Bsf exhibit at 2018 Epcot International Flower and Garden Festival and it was accepted.

(If you want to read about that show, go here)

That’s quite the journey, from China to Mississippi, then to Ohio, then to Michigan, down to Florida and eventually on display for (an estimated) 6 million guests to view at the Japanese Pavillion in Epcot at Disney World.

That’s a lot of eyes on a bonsai tree. Being the Florida chauvinist I am, I’d wager that a tree being on display at Epcot is more visible to the average person, not only with the guests that see it, but all the social media shares, blogposts, YouTube videos, family albums etc., than any tree in the world. That’s what I believe in, spreading the Art of Bonsai (notice the capital letters) to the average person.

The repot was a bit rough. We went from the spatula end of the root hook… 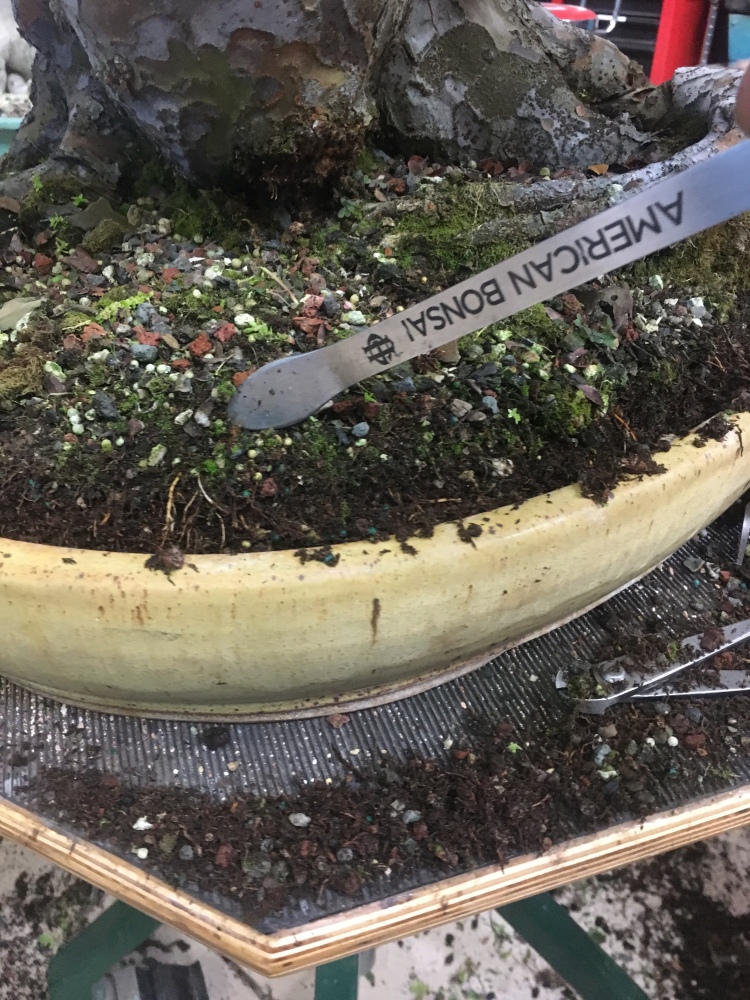 It had been in the pot for quite a few years at this point. And if there’s one thing to know about Chinese elms, they make roots.

We eventually got it out and got to work on those roots. 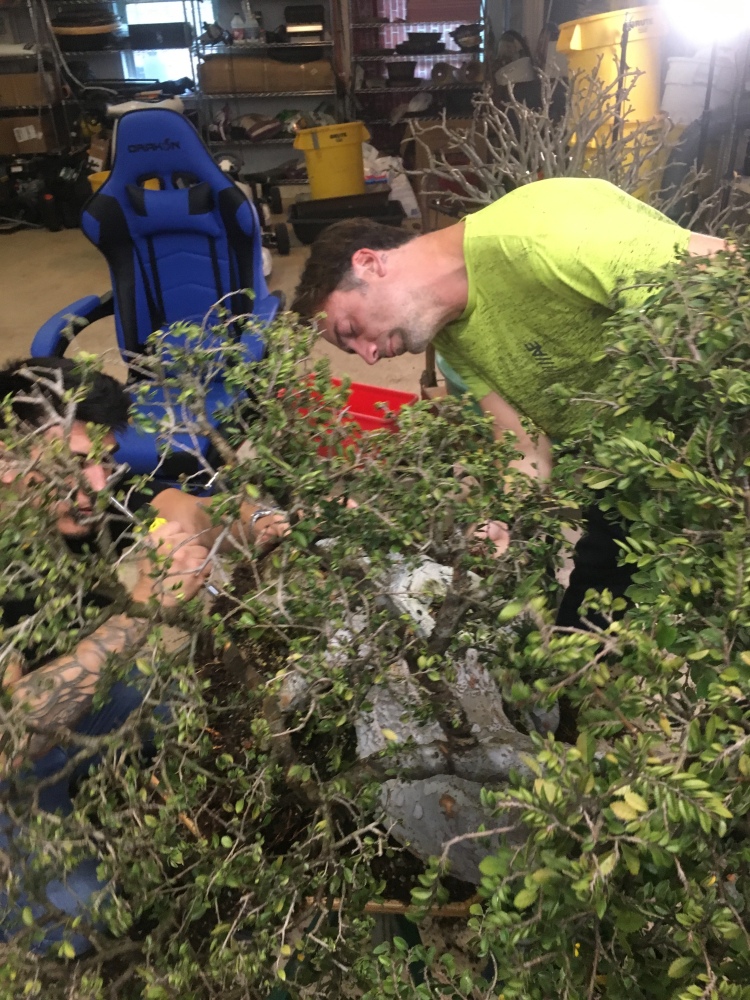 “Wait!” I’m hearing from the readers in the back row (these the same people in the bonsai demo that sit in the back and talk over the teacher….they already know it all, you see)

“That tree still has its leaves! It’s an elm, a deciduous tree, you can’t repot it until it’s dormant!”

You gotta love the bonsai police.

Do anything out of line, or unorthodox, and you’d better start reaching for the bandages as you are beset by slings and arrows of the Gatekeepers. 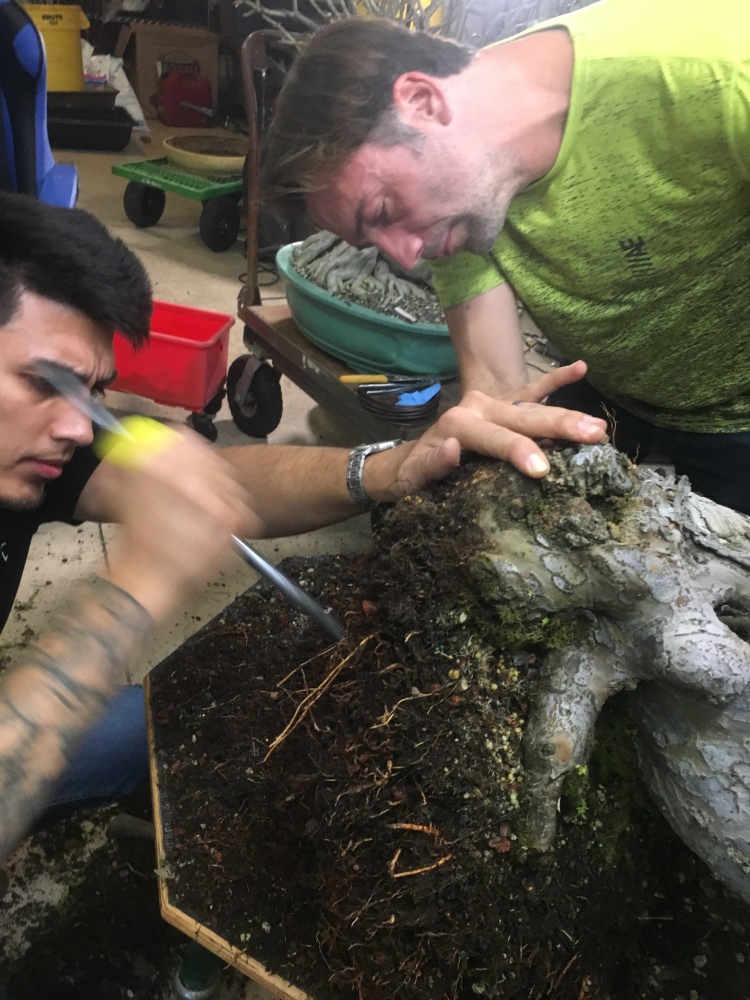 A Chinese elm is not really a temperate tree, though it can certainly live in a temperate climate. But it is from Southeast Asia, China, Taiwan, India, Vietnam, and Japan. It is officially described as a “….deciduous and semi-deciduous, but rarely semi-evergreen….” tree (I love how science writers can be both specific but wishy-washy at the same time).

This particular tree has amazingly small leaves, and I have observed that, here in Florida, the smaller the leaf on a Chinese elm, the less they want to drop those leaves in the winter.

This doesn’t mean that the tree is not dormant, but that the abscission response is diminished during senescence in those smaller leafed varieties, and sometimes it’s up to us to denude the tree (much how tropical species like a Brazilian Raintree are, when they go into a dormant state, and we must manually defoliate the old leaves).

Basically, I said that the dormant response on smaller leaves Chinese elms doesn’t cause the leaves to drop, so go ahead and cut them off.

Anyway, all that was to just explain that yes, Virginia, the tree is dormant.

Or we’d better hope it it, as hard as we are beating on the roots.

I did say that a Chinese elm makes a lot of roots, didn’t I?

There we go. We took off just about a half inch around the edge.

As seen by this blurry (but woeful attempt at digital sharpening) pic of the tree, back in its pot to see if enough was removed. 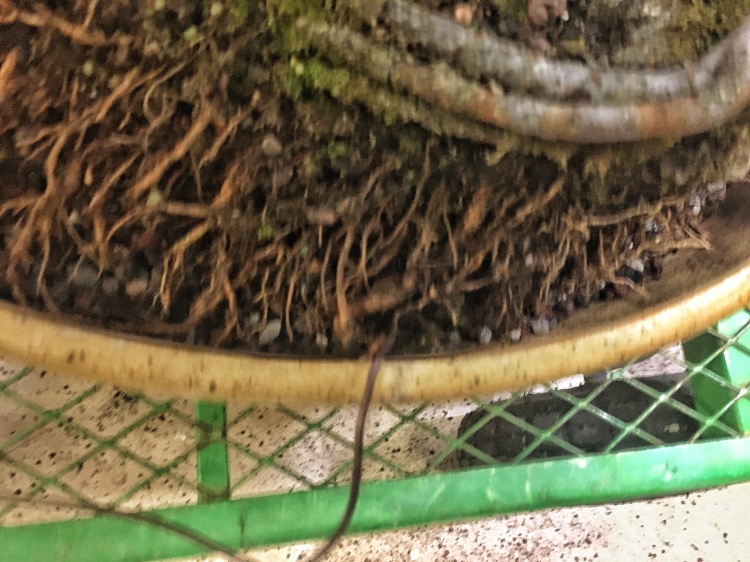 We could have removed more, but the tree is in a maintenance phase, meaning the growth is mature and it doesn’t need too much extra growth. If we cut off more roots, it could stimulate too much growth, and then it’ll be a battle to keep it in shape. This way it’ll grow happy, not angry.

After that battle, our constitutions needed strengthening. We found it in the form of some liquid refreshments……

David played bartender for us, and we had a slight break (that’s Vanessa, Ben’s wife, and their new baby girl. We are all family men, all with youngins’, I have four children, David two, and Ben two. I understand that both Ben and David enjoy the process of reproduction but I’m not sure if their intent is to fulfill the natural imperative of the continuation of the species beyond the two begets they each have )

After that brief break, we headed back into the studio to finish the job.

What a mess. I’m glad I’m not the sweeper-upper.

It’s Ben’s tree, so he gets to position it in the pot.

1 and one third back counterclockwise …..

How does that look? 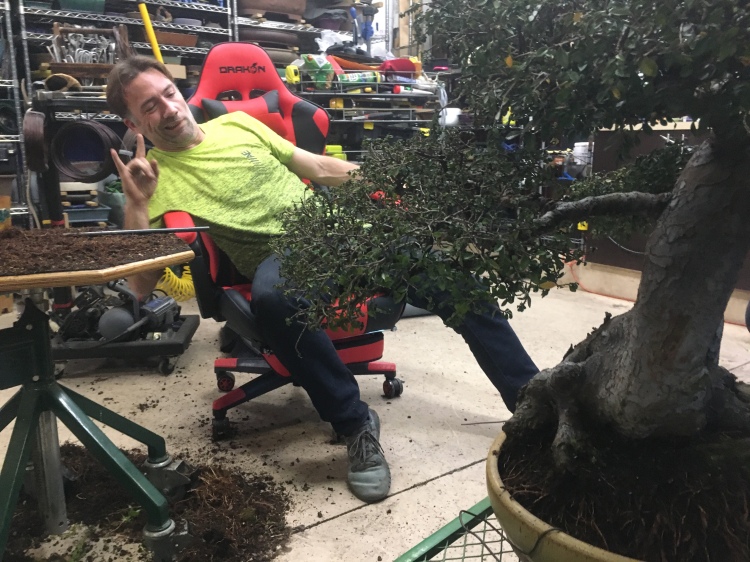 I think this is the back….wait, no….is it the front?

After about two hours of watching Ben move the tree “….a little to the left and maybe back a bit to the right….” it was time for some soil.

Modern aggregate designed for the tribulations and hazards that Florida offers a bonsai.

And there we go, looks comfy, all tucked in, don’t it? 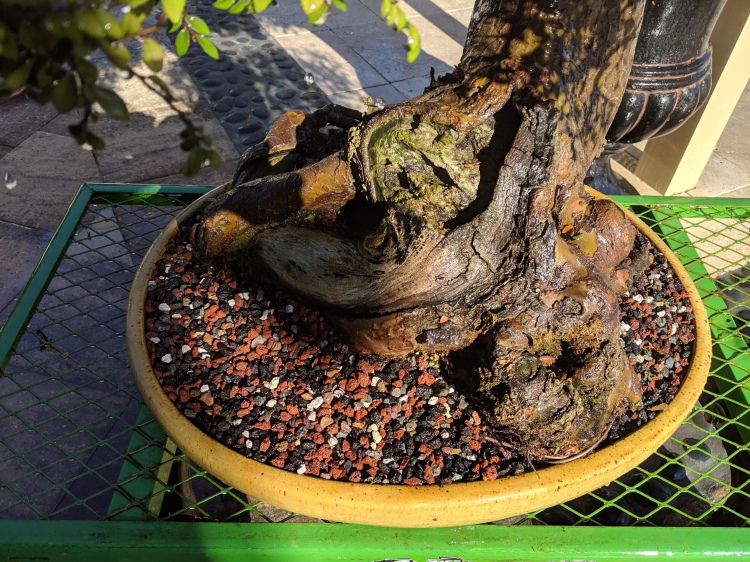 Here are some artsy fartsy shots by David.

The slight respite gives me the opportunity to talk about friendship, and bonsai friendship (this is a bonsai blog, after all).

I talked earlier about how Ben loves a tree with a backstory to it. He’s only been doing bonsai for a few years now, but he’s gone into it full bore, to the hilt, balls to the wall (insert your favorite cliche here). But, since he’s only into it a short time, he’s still building his friends in bonsai. The same with David.

I’ve been into bonsai for, ahem, a few more years, and have seen many people who I thought would be friends forever, slowly drift away. But my true friends, the ones who have grown with me, are still around. These are the my true bonsai friends.

Bonsai is an interesting calling for us. For many it’s a hobby, something that relaxes them after a stressful day or week at work. For others it’s a pursuit. A spiritual entanglement that speaks to them and gives them peace and joy. For some it’s a calling that makes them live it and it overwhelms their world.

To me, bonsai is an Art and Art is a battle between me and my inner demons, their constant pushing me toward violence and darkness, and ultimately a triumph over that. It’s exhausting.

For some, it’s just business.

It is a craft, with all the tricks and techniques, accoutrements and gadgets, and anything and everything that goes with that, that can be learned and shared or bought and sold.

It is horticulture, and all the philosophy with caring for living things entails (gardening is a subject I could write enough material for a book).

It is an Art (capital A) and that means there are “artists” in it. I consider myself an artist in bonsai.

And with “artists” come egos. But if you take all that I’ve said above, about the learning, about the passion, about the caring for a living organism, those things should temper the ego.

For me, it does. I don’t care what soil you use, what wire you use, what pruning technique you employ, what pot you plant the tree in, or to what level you wish to grow your art (and bonsai) to. That stuff is just details (as far as the soils and such) and the rest is what you are, personally.

If you want to make a million dollars, go ahead, but be respectful of those that don’t. If you like big trees (and hernias) don’t pick on those with small trees.

I also like most people in bonsai and can get along with most. I am nothing if not tolerant. I don’t care how rich or poor you are….if you like trees, I’ll give you the benefit of the doubt….I’ll even do it twice.

But look at this magnificent organism. This story of life, time, and the careful care that’s it’s enjoyed throughout its journey.

It’s been around the world….but there it is. Respect it. And respect those that have chosen to share space with it, and the next human who might guide its existence.

It could be you.