As I sat today in this new spot we’ve been calling “The Clearing”, in the early heat of this weird stay-ay-home spring (you know about the weird part, it’s the year 2020, April. But it’s also been 90f on some days, and The Nook is not situated very well for afternoon work), I keep looking at this tree.

It’s not all that special. Here it was back before I styled it.

I’m not sure if I ever showed it. I’m guessing I might have written a blog post, but it could have been during one of my blackouts. That’s an amazing book by the way, The Soloist, by Steve Lopez.

I won the tree at a silent auction in St. Petersburg (Fl, not Russia). It was cheap!

Anyway, my son was sitting with me, drinking beer. I said to him,

“Mathew…see that tree? Why don’t you go pick out a pot for it. ”

“An oval or rectangle” I said.

So he went over to the Wall of Pots-Expansion Area and started looking around. 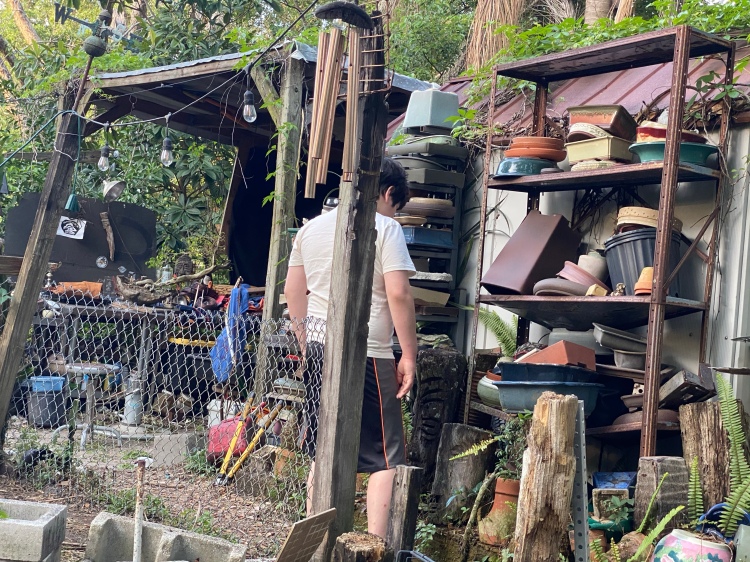 I sat and sipped on my brew.

He brought over three.

This one, by Florida potter Trudy von Linsowe.

This next one he picked because he said it looked like a squashed pot o’ gold.

It was also made by a Florida potter but I can’t read the signature.

And then this Japanese pot. With a chip in it.

I really liked Trudy’s. It’s something special (she likes to put messages on the bottom of her creations. I think it’s cool. Some don’t. Those who don’t can go to….well, you know where they can go to) 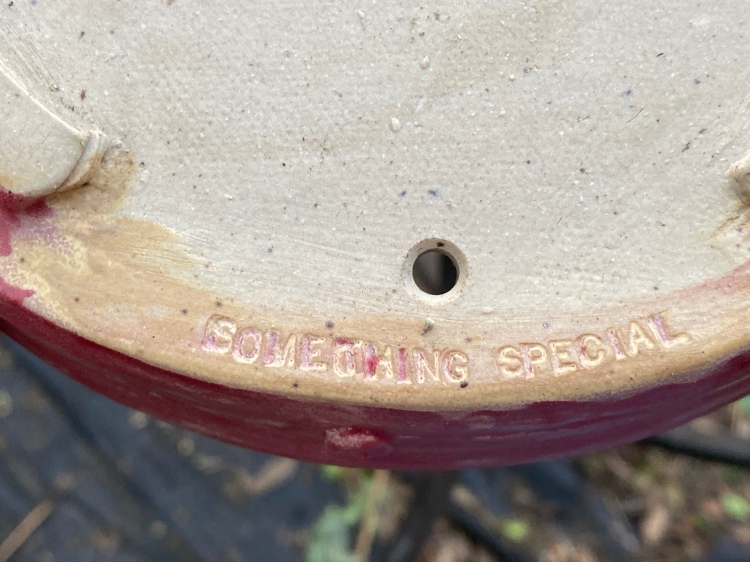 Here are the choices. 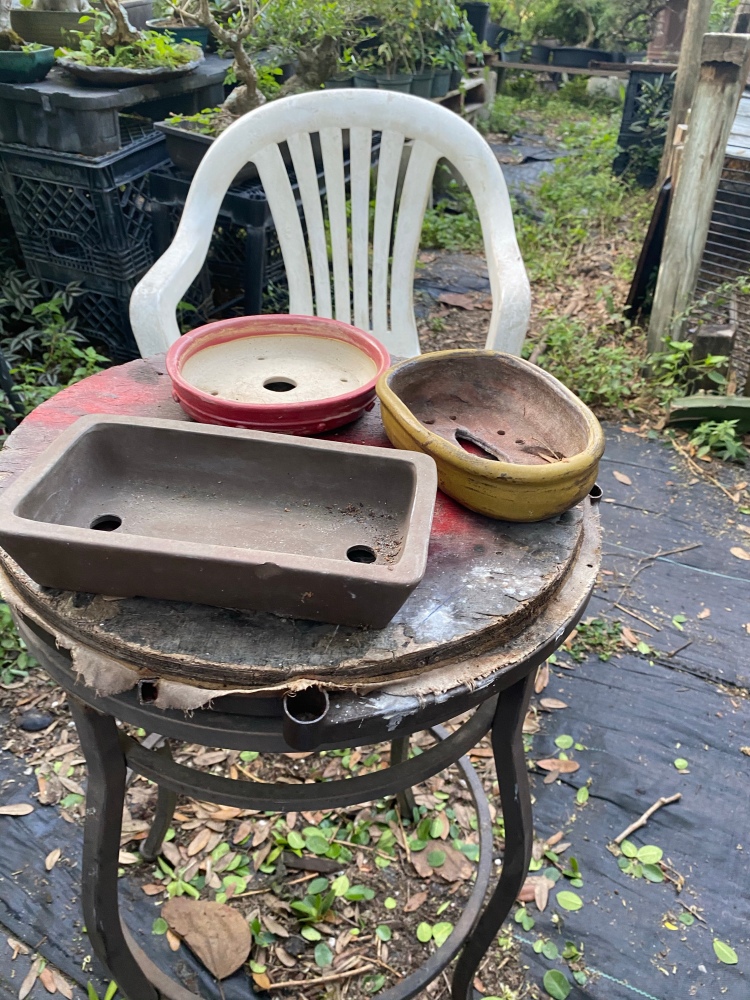 So I asked Mathew, 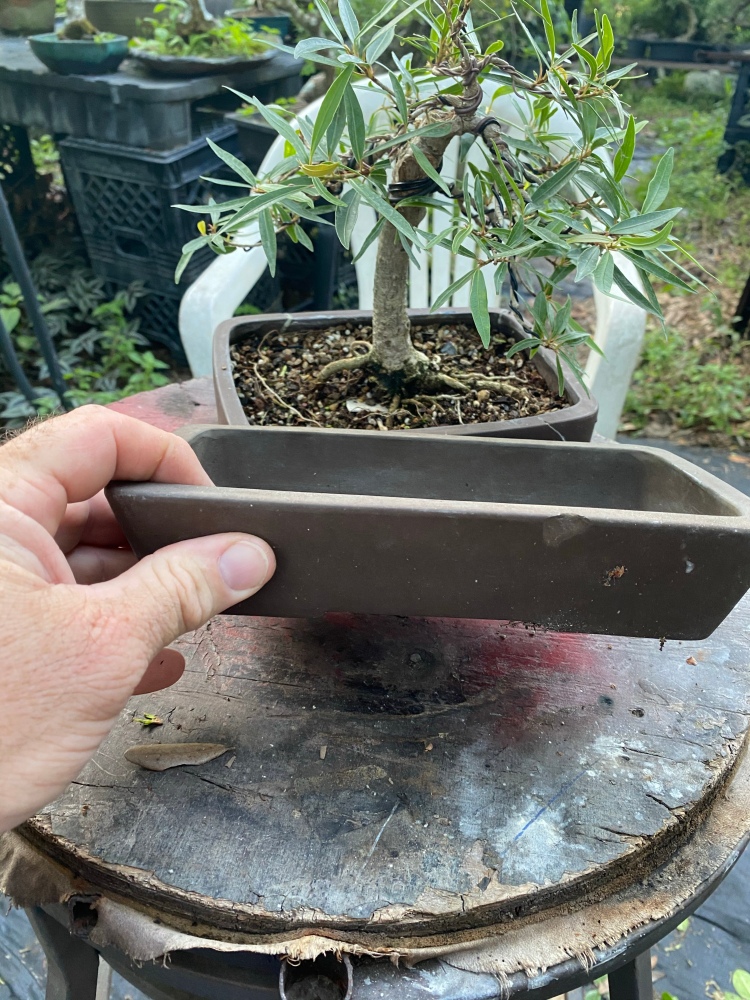 Chip and all. We can call it “Wabi Sabi”.

And he picked out a little character too.

Back in The Nook, I prepared the pot….. screening for the drain holes, tie down wire, and some of my SuperMix™️

Whoever grew the tree originally, used a good mix. It has a fair amount of roots.

They also added a wee bit of plastic just under the trunks base.

That’s a good trick to keep the roots from growing straight down. It makes for a good radial root system. 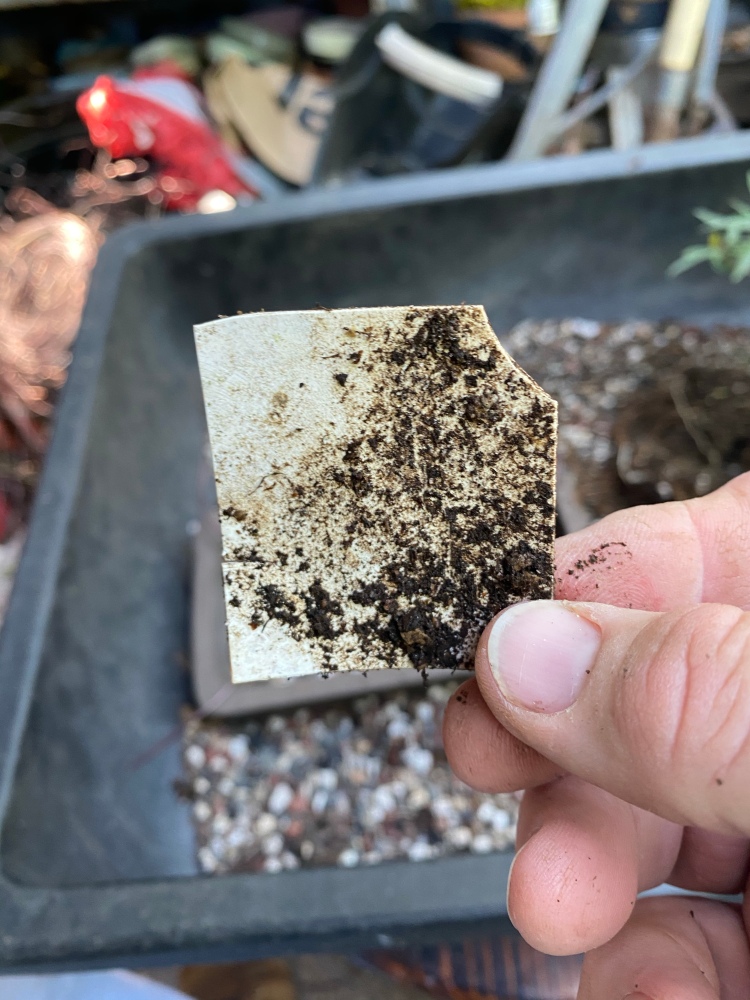 The carrot root is perfect for a root cutting. 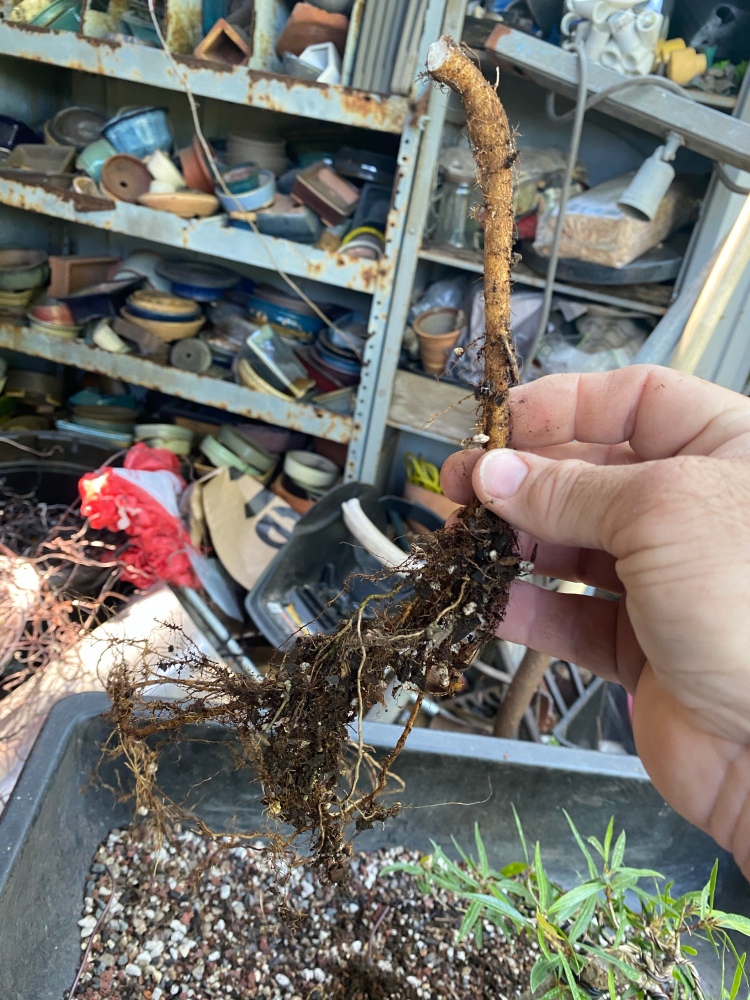 The basic idea is that you pot a root that’s been cut off a tree, into soil, and new shoots will grow from that cut end. 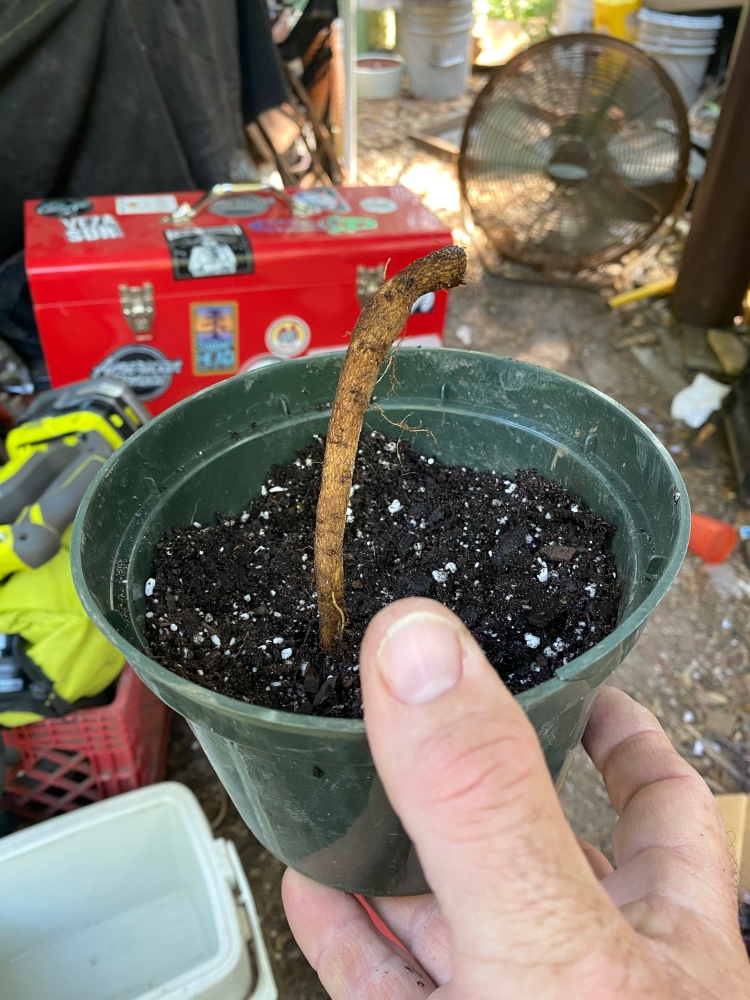 This is my mix for my nursery plants:

One part standard potting soil, and one part perlite.

I mention this because I get the question all the time about trees in nursery pots.

Bonsai soil is for bonsai pots. The deeper the pot, the faster it drains. So, in a nursery container, bonsai soil, which drains fast, and dries out quickly, will slow the development you are trying to achieve by putting it into a bigger, grow container.

Bonsai soil has no real magical properties except that it drains well. Shallow pots (the opposite of deep pots) drain slowly. That’s why we use it.

To continue, plop the tree into the pot, tie it down tight.

Backfill, fertilize, all that Jazz.

As for styling, you can see it is pretty much done. It’s just about fully wired.

Which I did back last year.

It’s not quite digging in yet, but close.

It’ll need to be removed in a few weeks or so.

But I will need to defoliate it. It is almost a rule to defoliate willow leaf ficus after a repot. It’ll drop leaves anyway, and it’s easier to clean up now.

Clean up now, while the soil is dry, consists of getting the leaf blower out and blowing it away.

After it’s been sitting for a few days and the leaves fall off, they stick to everything and just make a big mess.

And, literally only two tips need cutting on the top.

It’s been an amusing time spending 24 hours a day with the children.

I have my middle son, just entering puberty and all the hormones that ensue. He gets mad at just about everything.

My daughter, who just turned 18 and is ready to celebrate her 30th birthday next year, is practicing Russian nihilism. Her class was supposed to be graduating this year. She probably won’t ever walk the halls of her school again. She’ll get a diploma, but….yeah.

But I’m enjoying Mathew. He’s the baby. And he’s interesting.

He asked me the other day whether I had ever wanted to wear a wooden tie.

“How about a wooden bow tie?”

“Well….” he continued, “……how about a wooden hat? Because all those things exist you know….well, maybe not the hat, but the tie and bow tie, they are real things..”

Whoops, I almost forgot to put the little mud-dude in.

Stay safe and practice your wiring. Especially my students.

You know you all need to get those muscles trained.